As everyone knows, the latest edition of the iPhone family, the iPhone 11 was released earlier this year. While people are lining up outside Apple stores around the world to get their hands on the newest gimmick, so are the more reasonable people of us travelling the world for the price of a new iPhone.

If you divide the price of an iPhone 11 Pluss 64 GB on 30 days will you end up with a daily budget of 33,3Usd ( 969 / 30 = 33,3USD)
For a daily budget of 33 USD, you can live a pretty good life as a backpacker in many countries around the world.
Especially in South East Asia where you can easily live in every country on a daily budget for less than 33Usd (Except Singapore), but it’s also easily doable in Eastern Europe and Central America.

Here is my recommended list of countries you can stay in for a month if you decided to travel instead of buying the newest iPhone 11 Plus. 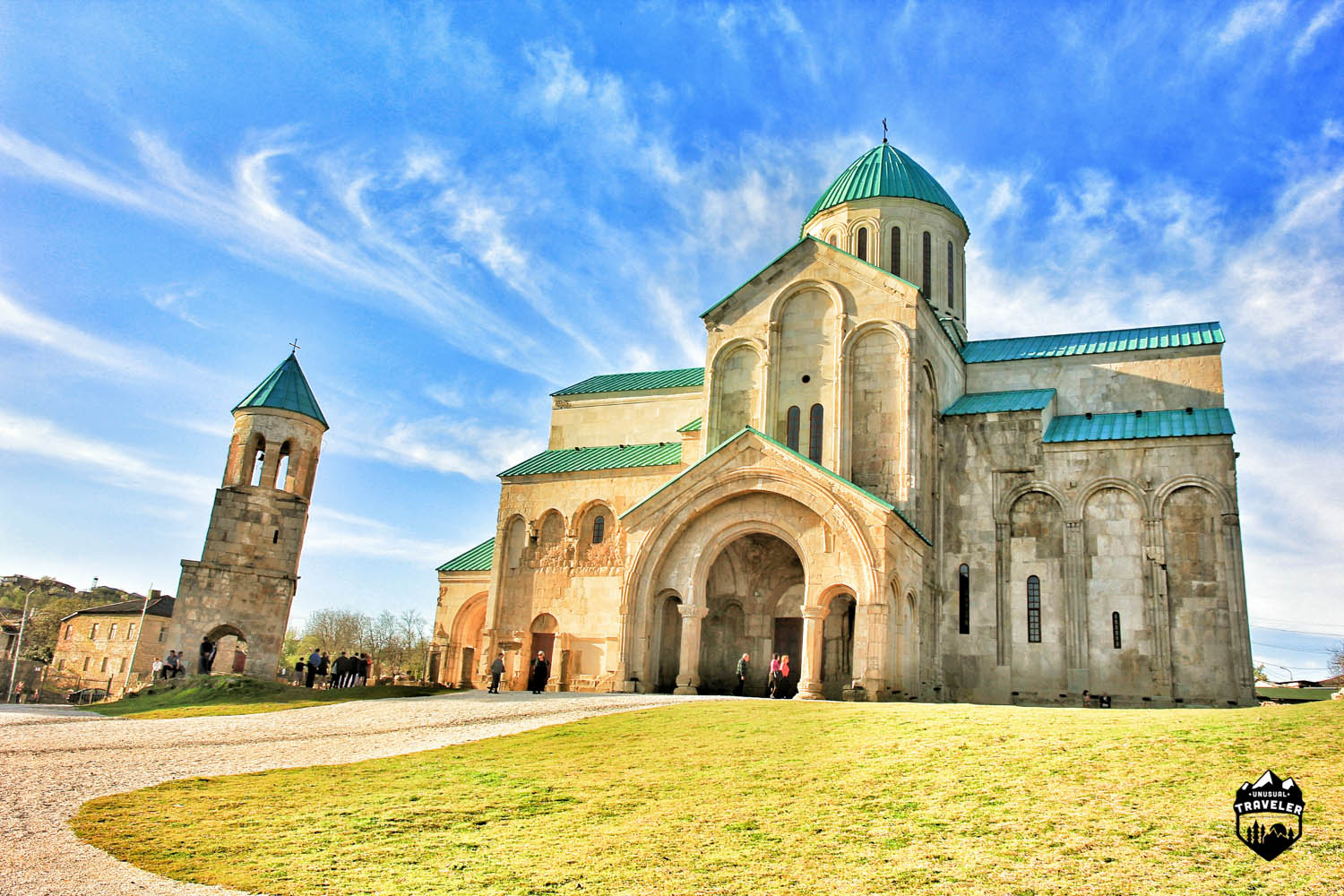 Georgia is a country rich in history and culture. It was one of the first countries in the world to obtain Christianity and Archaeologists have found the oldest known traces of wine production, dated 8000 years BC, in Georgia.
The country offers everything from wine trips, world-class hiking and skiing in the Caucasus mountains, beach resorts by the black sea to a lot of old soviet remains.
Georgia’s tourist infrastructure has expanded substantially in the last few years, and it’s easy to understand with the low prices.

A dorm bed in a central located hostel in the capital of Tbilisi will cost between 5 – 10 Usd a night with the most expensive ones often include breakfast (pancakes, toasts, serials, juice, and coffee)
Outside the capital, you can get the same deal for 4 – 8 USD.

The Cost of Food and Drinks in Georgia.

Every hostel I ever stayed in Georgia had a guest kitchen, so if you prefer to cook your own meal to save money, there is absolutely no problem with that.
But if you prefer to eat outside, as I do, that will cost a little bit more.
A local meal of the traditional dishes like Kinkhali and Khachapuri costs 3-4 USD in a local restaurant. A normal meal at MacDonald’s costs 5-6 USD.

A coffee in a coffee house costs around 1,3 Usd and a beer will cost you less than 1 USD in the supermarket.

The Cost of Transportation in Georgia.

Even if you stay in one of the best Hostels, enjoying 3 good meals and a few beers a day, will it cost you less than 32 USD a day. 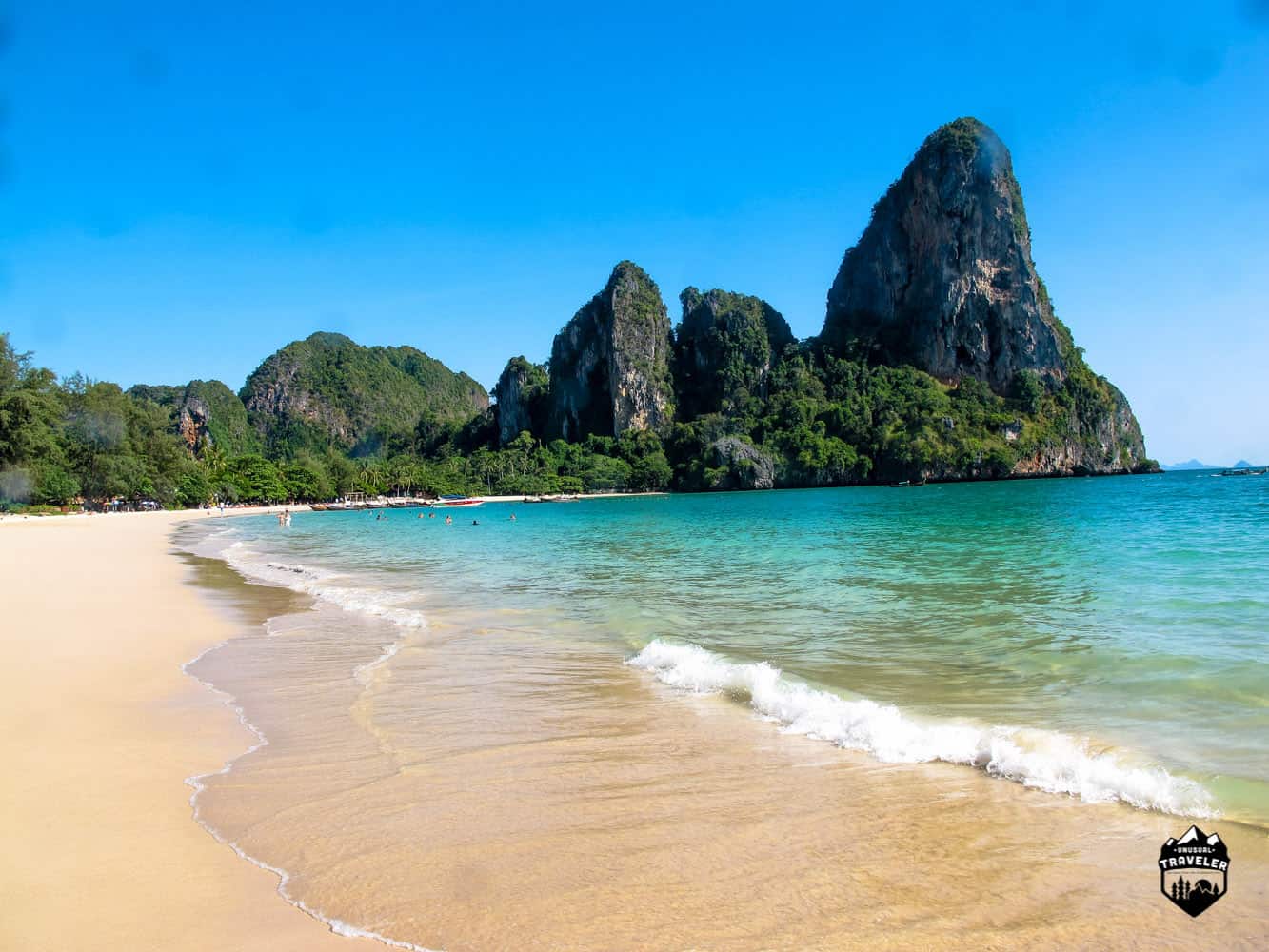 Railay beach in Thailand, one of the most famous beaches in the country.

Thailand, the first time backpackers favourite has long been considered one of the best budget-friendly destinations in the world. It’s a country were a lot of people stay for a lot less than 969 USD a month. By far the most backpackers I have meet in Thailand have a daily budget of maximum 20USD, its not uncommon to have a budget on 15USD a day in Thailand. So it’s possible to stay 2 months in Thailand for the price of an iPhone 11 Plus.

The price of accommodation in Thailand is very reasonable; you will have no problem finding dorms from 4-8 USD and a private room in a guesthouse in Thailand will only cost you about $8.

The Cost of Food and Drinks in Thailand.

One of the biggest joys in Thailand is the food. But It’s important to seek out the local food, that is often sold from small street vendors both for the sake of your tastebuds and your wallet. Popular restaurants in the most touristy area cater to travellers and foreigners will be less authentic and a lot more expensive.

A plate of Pad Thai or spring rolls rarely cost more than 2USD a plate. So you can easily enjoy 3 big meals a day for less than 10USD.

The Cost of Transportation in Thailand.

Transportation is, by far, the most costly expense, together with Alcohol when travelling in Thailand.
Tourist V.I.P busses are often far from V.I.P and drop you far from the city centre, so you will end up paying a high taxi fee to get to the centre. So it’s much better not to take the local V.I.P busses.

The train is by far the most comfortable way of travelling in Thailand. The tickets are pricey compared to the general cost of Thailand.
A second class ticket from Bangkok to Chang Mai is 29USD.
A bus ticket for the same route cost 10 – 20 USD, but it’s a lot less comfortable.

As already mentioned, Thailand is a country where it’s possible to live up to two months for the price of an iPhone 11 Plus. Most people will like to live a bit more comfortable, something that is still possible for less than 969 USD / 32 USD a day. 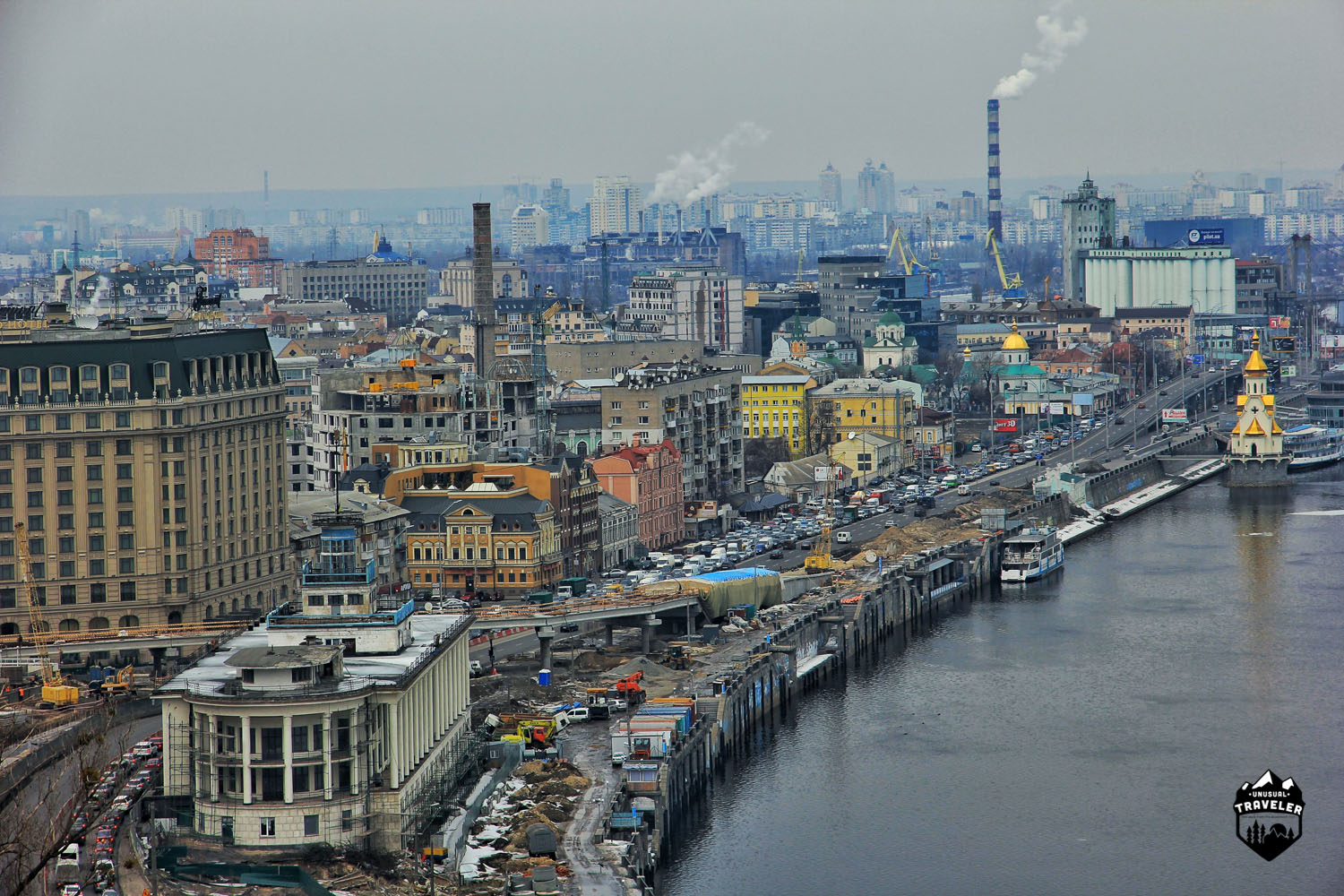 It might not look pretty, but Kiev as an amazing city.

Because of the conflict in the eastern part of the country and the local economy is at a horrible state, Ukraine is a perfect country to visit for travellers that want to stay in a cheap place. Ukraine is actually cheaper than most Asian countries now.

The average monthly salary in Kiev is no more than 200 USD, so it’s easy to imagine how much you will get in Ukraine for 969 USD a month.

Kiev and Ukraine offer some of the best value hostels than anywhere else in the world. You can find dorm beds for as little as 3USD, while better hostels charge 6-8 USD for a dorm bed. All hotels in Ukraine also have well-stocked guest kitchens so you can cook your own food.

The Cost of Food and Drinks in Ukraine.

A decent meal in a local restaurant costs less than 5 USD. A big bottle of beer costs less than a buck, and a coffee cost around 1USD in a coffee house, it’s easy to live a great life in one of the most beautiful city’s in Europe without being afraid of spending all your money.

The Cost of Transportation in Ukraine.

A 8-hour journey with a bed in the sleeping carriage between Kiev and Lviv, the cultural capital of the country only costs only 4 USD. A bed on the train between Kiev and Odesa costs 6 Usd.  So it’s easy to say that transportation is dirt cheap.

Ukraine is such a cheap country that you will be able to splurge with a daily budget of 32 USD. 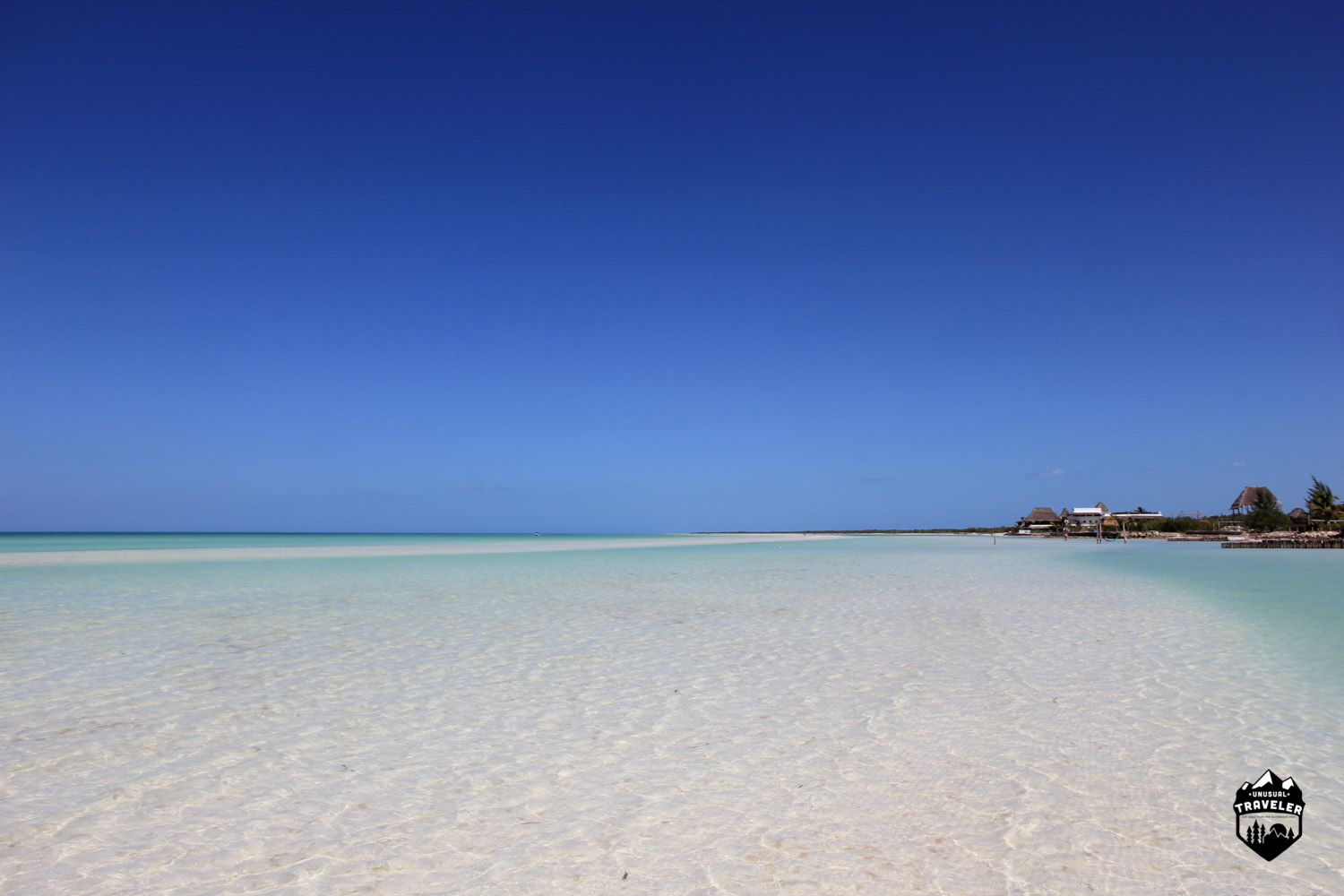 The Paradise Island of Isla Holbox

Mexico is so much more than the overpriced Cancun and impressive Maya ruins.
Just head a few hours away from Cancun, and you will be able to find room on a paradise beach for less than 10 USD a night. And with the option of Taco, Tortilla and Guacamole as street food, Mexico is a perfect destination.

Mexico offers the best standard of hostels I have experienced anywhere in the world From Mexico city, beach towns to hippie destinations offer high-class hotels, and most of them even include a big breakfast for 10USD a night.

The Cost of Food and Drinks in Mexico.

Local street food in Mexico is so good and cheap that you won’t notice it on your wallet. If deciding to head to a local restaurant, it will cost you around 3 USD. A local beer cost less than 1USD. So for about 10 USD, you can enjoy 3 good meals with some beers.

The Cost of Transportation in Mexico.

Mexico has some of the most comfortable buses than anywhere else in the world, and they rarely cost more than 20 USD.

Mexico is a country where it’s very easy to live for less than 969 USD a month, as long as you stay in one area. I personally rented a NICE flat in “San Miguel De Allende” for 20 USD a day a few years back, even with having a few beers a day and eating great I was spending less than 800 USD a month. 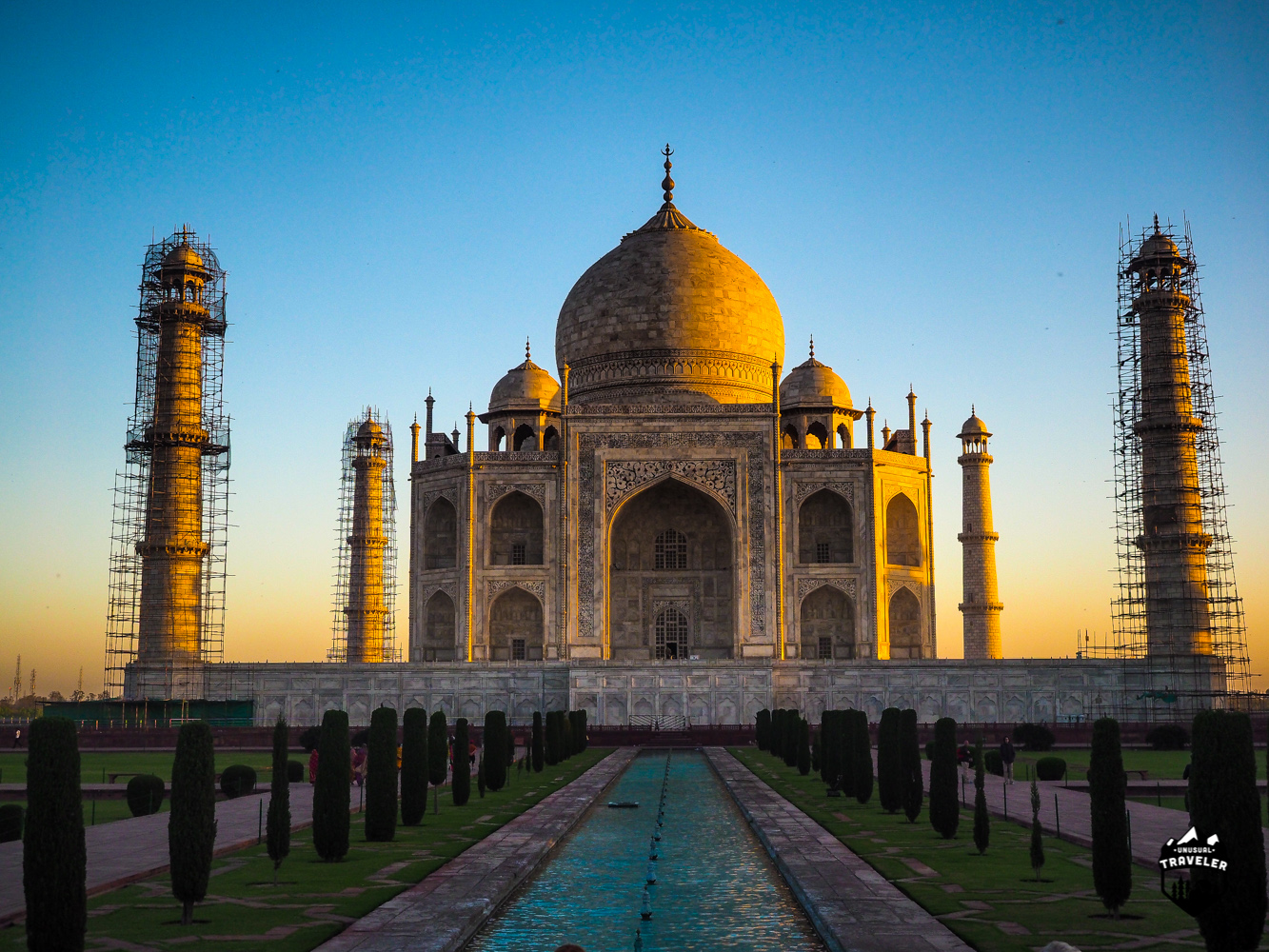 Another cheap favourite for travellers. A country that offers everything from Skiing to world-class diving: India is a country where it’s hard to spend 999 USD a month as a backpacker.

Accommodation in India is very cheap, especially if travelling together with another person. You will never have any problem finding a room for less than 10 USD a night, that’s 5 Usd each.
I did stay in Goa for a few weeks earlier this year, where I had an aircon room on the beach, with a small kitchen, big bathroom and beach view from my balcony for 8USD a night.

The Cost of Food and Drinks in India.

If eating local in India will a meal never cost more than 2 USD a meal, often with a free refill, a meal at Macdonald’s costs less than 5USD, tho Alcohol is expensive in India compared to the normal living cost.

The Cost of Transportation in India.

Transportation in India is also dirt cheap. A train side across the country cost less than 10 USD. A local bus ride costs about 1USD, so travelling around India will not kill your budget.

If you can’t afford travelling in India, you could never afford to buy an iPhone 11 anyway. 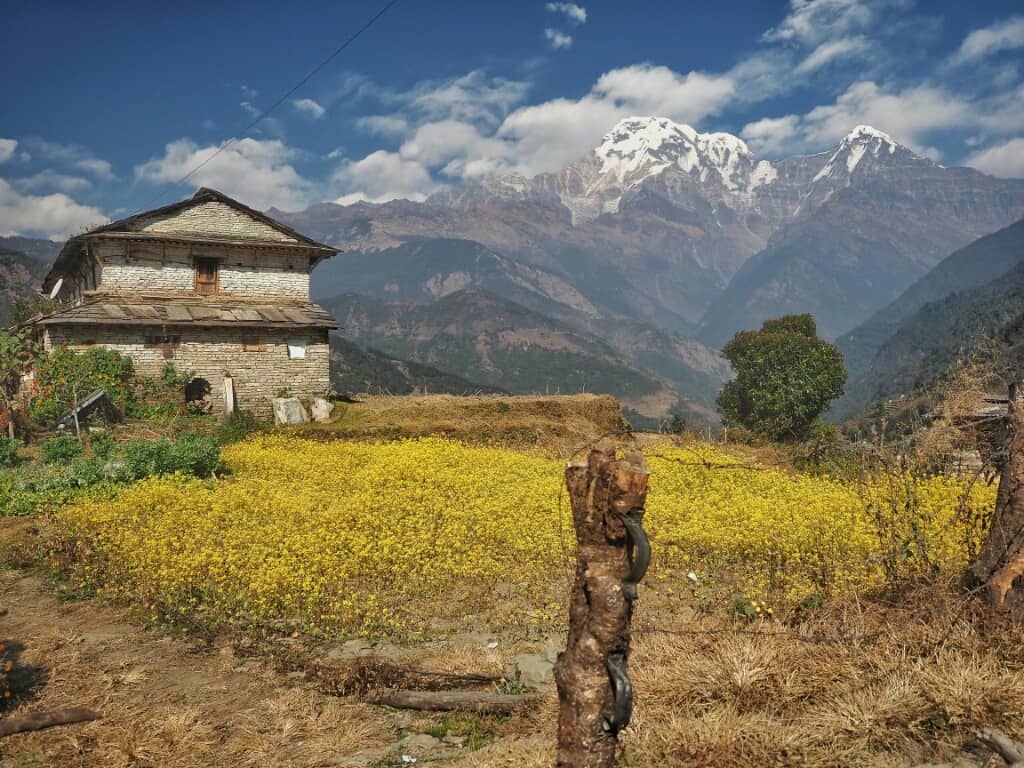 From the Annapurna Basecamp Trek

Nepal’s is another backpacker favourite Most people visit Nepal for hiking in the Himalayas, and it’s actually cheaper to hike to Mount Everest Basecamp than buying the new iPhone. Except for people doing Mountaineering expeditions or people visiting restricted areas nobody is spending  969USD a month in Nepal as a backpacker. I have meet tons of backpackers spending less than 500 USD a month, especially people staying in Pokhara.

Accommodation in the capital Kathmandu can be a bit overpriced, especially the dorms in “Hostels”. Walk a bit around, and you should be able to find great value rooms for 5-8 USD a night, some even include breakfast.
In Pokhara can you easily find a nice private room for 3-5 Usd.

The Cost of Food and Drinks in Nepal.

If going local and eat what the locals eat, a good meal will never cost more than 2 USD If you rather eat Pizza and Hamburgers, it will cost around 8 USD + a meal, Alcohol is surprisingly expensive, and a bottle of beer often cost 3USD++.

The Cost of Transportation in Nepal.

The only way of travelling in Nepal is with buses and shared minivans, except for foot when hiking.
A shared minivan (much faster and more comfortable than the tourist buses) cost 5USD. A tourist bus ride often cost 10 USD – 15 USD between destinations.

Prices in Nepal went up a lot after the 2015 earthquake, especially the entrance ticket fees skyrocket, and you now often have to pay 10 USD + to enter a site, compared to 2 USD before. Accommodation and transportation prices also went up a bit. But Nepal is still probably the cheapest country in the world for a person looking for a long term stay in a foreign country.  For the 969 USD for a iPhone 11, you could easily be able to stay in Nepal for 2 months.