When we rave about the South Pacific, we often bring up the island of Niue. Rarely have we met someone who has heard of this tiny island nation, also called “The Rock” (short for “The Rock of Polynesia”). Not to be mistaken with Alcatraz “The Rock” in America. 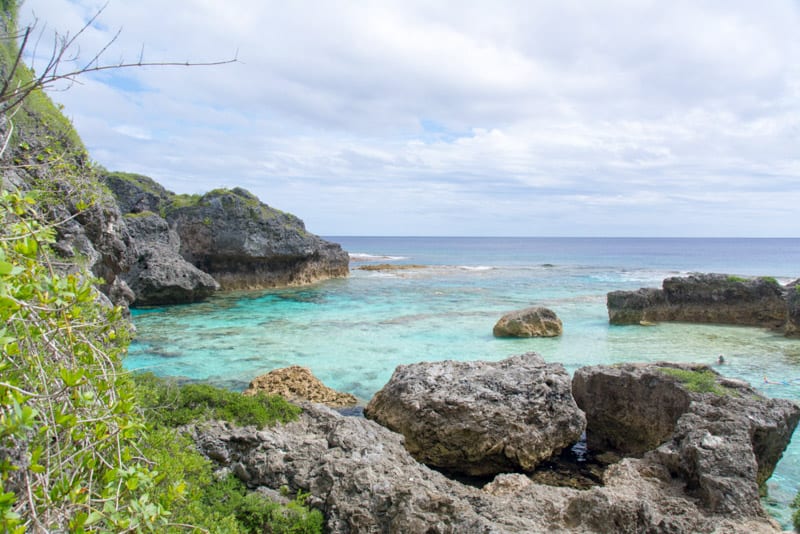 Niue is located 2,400 km / 1491miles northeast of New Zealand, in the heart of Polynesia. It’s a small island with unique geographic formations and stunning underwater life.
Niue gets its nickname from being one of the largest coral islands in the world, which means that while it doesn’t have many extensive beaches, its rock formations more than make up for it.

The first people to arrive on Niue were Polynesians from Samoa who settled Niue around 900 AD, but it was not until 1774 that Captain Cook became the first European to discover and try to sail to Niue.
The native peoples refused to allow the crew onshore, and the local delegation was painted in what appeared to be blood (it was actually red bananas), so Captain Cook named it the Savage Island. Thankfully, the people when we visited were exceedingly friendly!

Niue is a self-governing state in free association with New Zealand. This means that New Zealand essentially speaks on behalf of Niueans on diplomatic matters, and Niueans are citizens of New Zealand. In fact, a vast majority of Niueans live in New Zealand for work and study opportunities. Due to this, Niue´s population is rapidly declining.

Most visitors staying less than 30 days do not need to apply for a visa in advance of their visit. A visa is granted for free on entry to Niue.

Air New Zealand is the only airline that flies to Niue with the twice-weekly flight between Niue and Auckland. The flight is about three hours long. The Niue International Airport is Hanan (IUE) and is only a few minutes from Alofi, the capital and largest city of Niue.

Travellers should note that when flying from New Zealand to Niue, the plane will cross the International Date Line! That means that when you arrive in Niue, it will be the day before you left New Zealand. 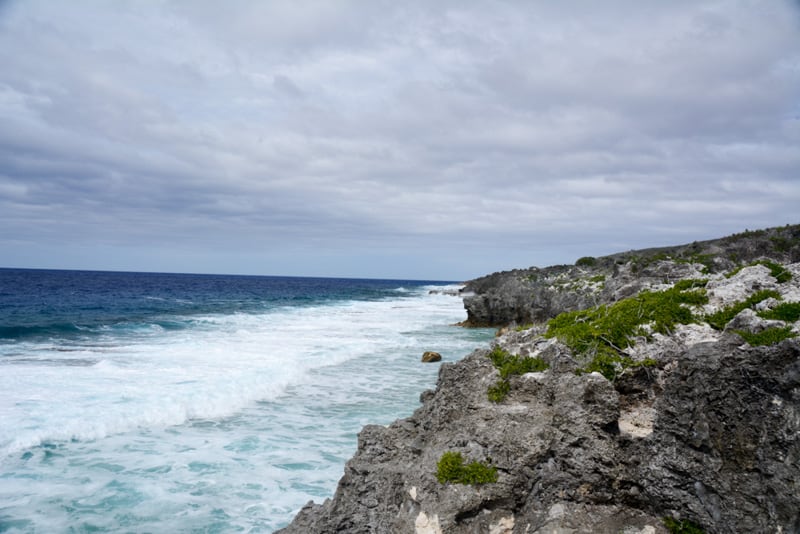 The Rocky Coast of Niue

Niue is a pretty tiny island. Your accommodations will probably include or provide a transfer to and from the airport.  However, there are plenty of cool things to see around the island, so I highly recommend renting a car for a few days.

We rented a car for one day, which was not enough to get around to all the sea tracks.  Some of them require specific timing – like a low tide – so it is best to give yourself a few days to see everything you want to see.

The local currency is the New Zealand Dollar. There are no ATMs in Niue, though credit cards are widely accepted. It is best to withdraw cash at an ATM in New Zealand, or you can get cash through the bank in Alofi, Kiwibank. 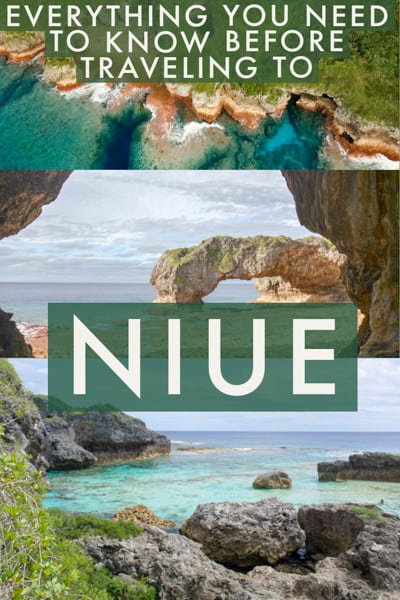 The internet is very slow in Niue. There are a few free wifi hotspots, and your accommodations might provide a connection, but it will be very slow. That’s ok – take this time to disconnect from your home life!

Niue is very safe and friendly! We did not feel uncomfortable anywhere, and I would feel perfectly fine, travelling around the island by myself.

There are no Hilton or Marriot hotels in Niue!  There are a few backpacker lodges and some locally-owned guesthouses, as well as one resort. There are self-catering options, but be aware that food is expensive in Niue, as everything is imported from New Zealand by plane.
The local families grow their own food and eat a simple diet of local produce and fish. 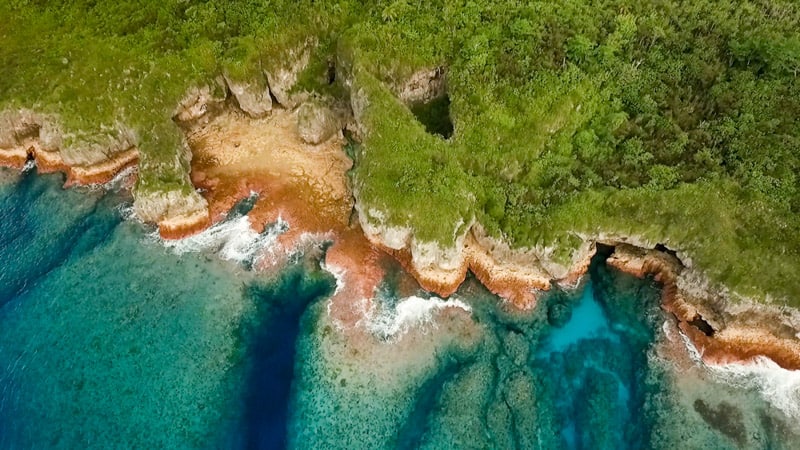 There are two official languages in Niue: Niuean and English.  Almost half the population speaks English, so getting around is very easy.

Top Things To Do In Niue.

Niue boasts some of the clearest water in the world.  The island’s limestone acts as a filtration device, so visibility in the water is often 30 – 80 meters. The island is surrounded by coral, and chasms and caves are plentiful. Dolphins can often be seen as well as the katuali, a highly venomous but docile and small sea snake.

Additionally, there are many small pools around the island that are good for snorkelling, like the very popular Limu Pools on the northwest side of the island. The Limu pool is where freshwater meets saltwater, and the result is a noticeable thermocline – a top layer of colder water over a bottom layer of warmer water.  The colder layer is almost like looking through a pane of frosted glass! 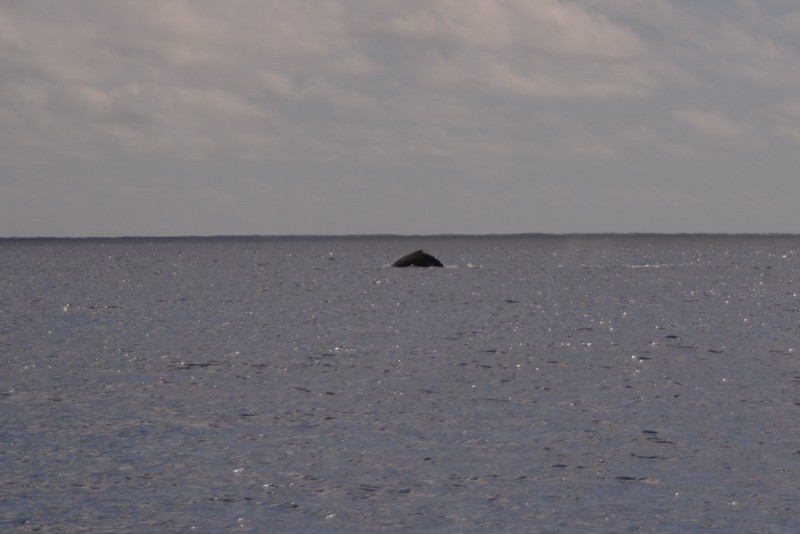 The odds are pretty good through the peak season that you’ll see a whale anyway.  Since the waters around Niue as very deep, the whales get pretty close to shore and they can be seen from the beach or cliffs.

While we visited Niue, we took a group of researchers from the Oma Tafua Foundation out for a local education program. Niuean teens joined us as we went looking for whales.  We watched their tails slap on the water, talked about the research that is done to track their movements and understand their lives, and we even got to listen to humpback whale songs on a hydrophone. 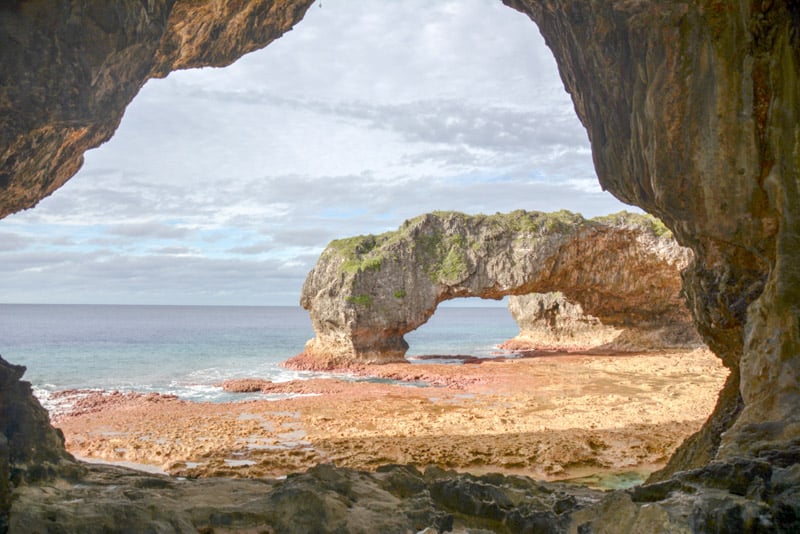 Thanks to the coral structure of the island, there are a lot of interesting rock formations and caves to visit.  It is best to visit at low tide. First, you trek through the woods before crawling down into the rocks. The Talava Arch is surrounded by a dry reef at low tide, so you can walk across the exposed land and poke around in tide pools while admiring the large arch that dominates the view out to sea.

This track is another amazing feature that is stunning and unique to Niue. You will hike through the forest to the start of the pinnacle field – a huge area on the water’s edge that is ancient coral rock. The pinnacles are jagged and make for an amazing view.

Deep in the pinnacle field is a chasm where you can walk a beach, sit under a palm tree, or go for a swim in the small pool.

Niue is extremely organised for the tourist. I highly recommend a rental car, as the ring road around the island is about 60 km long and has plenty of interesting stops. Each stop is labelled with a sign, and the trails are well-marked. Sea tracks will often bring you down to the beach.

What and Where to Eat in Niue.

Every Tuesday and Friday morning, a market is held at the Niue Tourism Office.  Local produce is sold, which means lots of fresh tropical fruit. There are also many prepared Polynesian dishes such as nane pia, a sweet treat made with tapioca and coconut milk.

One of the restaurants we dined at was Jenna’s. The benefit of dining there is that it is a buffet paired with live entertainment. With the buffet, you are able to try a variety of Polynesian dishes that contain local ingredients such as coconut crab, taro, and wild greens. We tried dishes such as salted beef packets and roasted pig.

After dinner, there was a dance show. Like we saw in many nearby islands like Tonga, the women have a slower, gentle dance, often seated, while the men clap, slap, and hoot!

Another unusual item to eat in the South Pacific is noni, a small, bitter fruit that grows in old lava flows. I personally didn’t like the taste, but it’s purported health benefits are intriguing, and the orchards are fun to walk around.

Amy has spent the last five years living aboard her sailboat and sailing around the world.  She does this with her husband, David, and blogs about it at Out Chasing Stars.  They also share their adventures on YouTube. In April of 2020, they will finish their world circumnavigation.