Only a few years back and Uzbekistan would hardly be a country that would have thought about when you decide to travel to (Central) Asia.
But that has changed over the last two to three years, with the visa now getting a lot easier to obtain.

During my first visit to Uzbekistan in 2012, didn´t I see a single another foreign tourist for three days in Samarkand, not that hard to understand since the visa used to be a complete nightmare to obtain back then, but on my recent trip, I had to wait on lines full of tourists. 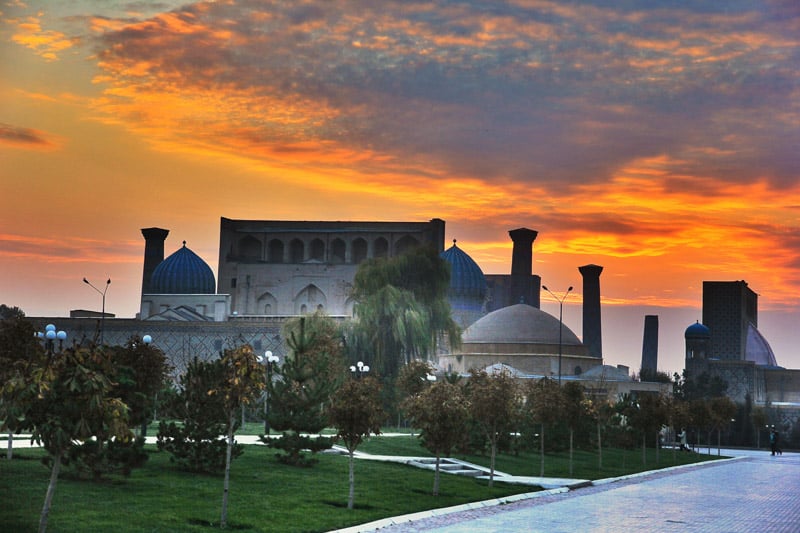 Sunset over the amazing Registan from the back in Samarkand.

Did you know that one of the most important cities in the world of all times was precisely located in Uzbekistan?

The city of Samarkand is a living legend of the world. With its history dating back more than 2700 years, it is a city which existed at the time of ancient Rome and Babylon.
As a capital of one of the greatest empires, the world has ever seen, and still to this day do  Samarkand inspire and lure people from all over the world, so see it´s beauty.

Even though Samarkand is not the only historic city worth visiting in Uzbekistan, it is for sure a great starting point. Two of the other must-visit historical places in Uzbekistan are Bukhara and Khiva.

Once you set foot in Samarkand, there are a couple of things you need to know to fully understand the magnitude and glory of this city.

Samarkand THE CENTER OF AN EMPIRE.

The city survived destruction and conquests of Aleksander the Great who turned Samarkand into a military base.
Later, the city was smashed by Genghis Khan who allegedly killed three-quarters of the people living in Samarkand at that time.
But Samarkand was also a centre of one of the greatest empires of its time and one of the most important stops along the whole Silk Road. 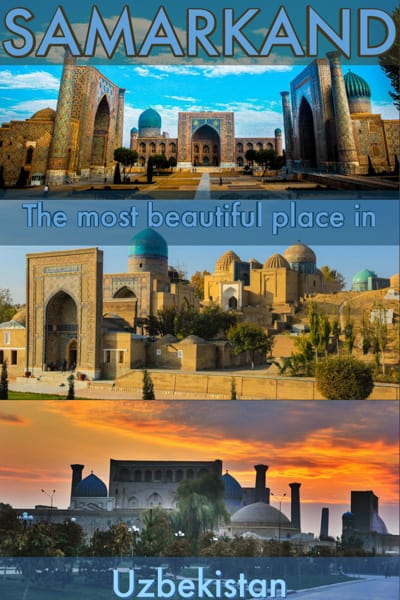 The Ultimate Guide to Samarkand, the most fantastic city in Uzbekistan and Central Asia.

It started and ended with the notorious Timur (Tamerlane). Well, truth be told, he was well-known among the people he conquered and beloved among his fellows.
Timur was a ruler of the empire during the 14th century, and he was the one who brought Uzbekistan to glory. His empire was spreading from Istanbul to Delhi, and Samarkand was at the centre of it.

Timur had been a great leader for his people but also a great supporter of art and science. Under his rule, Samarkand flourished and established itself as a centre of not only trade but knowledge as well.

SAMARKAND A IMPORTANT STOP ON THE SILK ROAD.

Samarkand was a place which connected the whole world. It was also one of the first bright examples of globalisation. It was a place on the Silk Road where East and West came to meet and learn about each other.
Within its walls, the world gathered to exchange goods, ideas and goals.

Traders on camels flocked into the city and looked for lucrative opportunities and the city used the opportunity to recover and grow.
Throughout the city, you will see many reminders of the golden age of the city. To start from the core of it, go to Registan.

REGISTAN – THE HEART OF SAMARKAND. 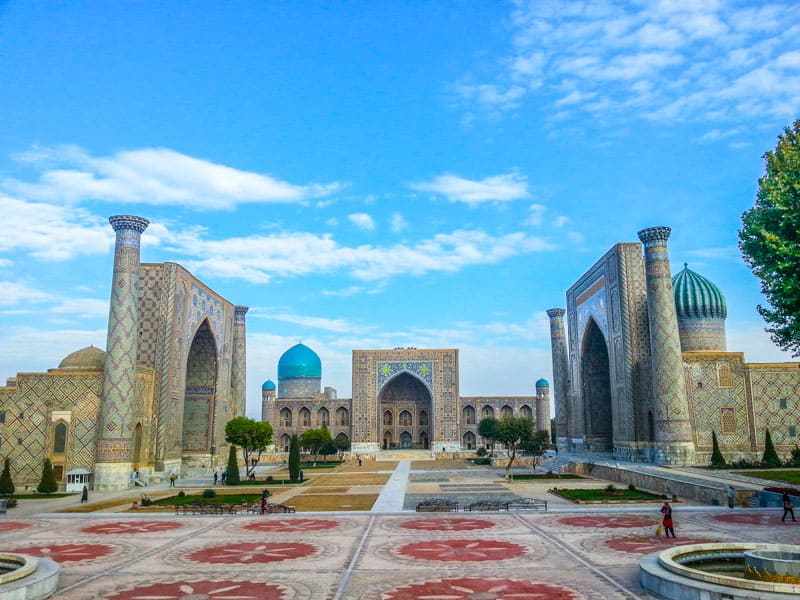 The amazing Registan in central Samarkand.

The life of the city was and is revolving around Registan, and for you to start appreciating the city and its history, make sure you first get to know this amazing place. I was about to learn why some people come to Samarkand, only to visit this place.

Once you step into the vast Registan square, prepare for a jaw drop. The colours, geometrical shapes and beautiful architecture spreading around are breathtaking.
The square is surrounded by stunning madrassahs. 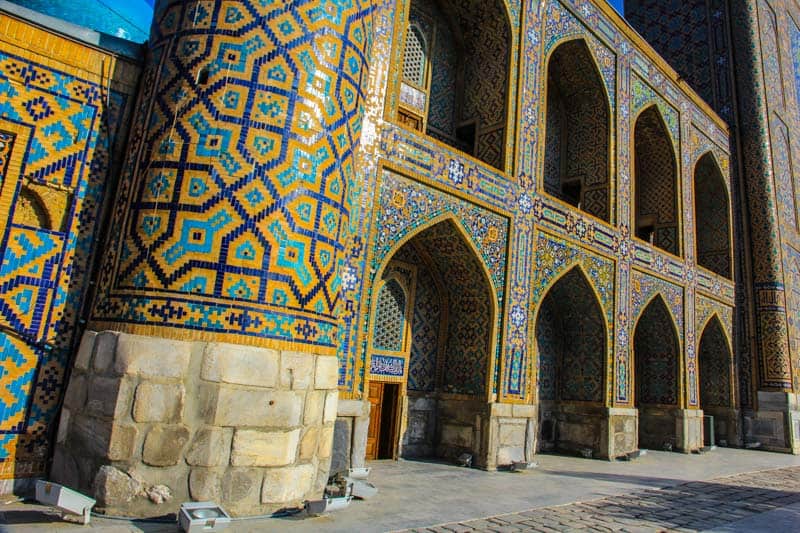 The central building in Registan. 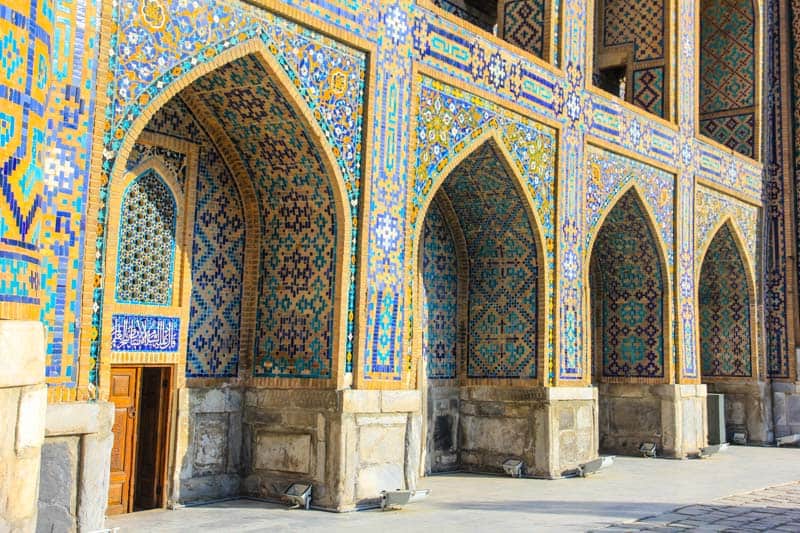 The central one is the Ulughbek madrassah, which was erected first. Once you are in front of it, you will notice that on the magnificent gate which leads the way into madrassah, there is a sun depicted on top. Sun was to represent knowledge that will be shining upon the students of the madrassah.

A big blue dome is lurking back on the left, bringing surreal outlook to the whole square. 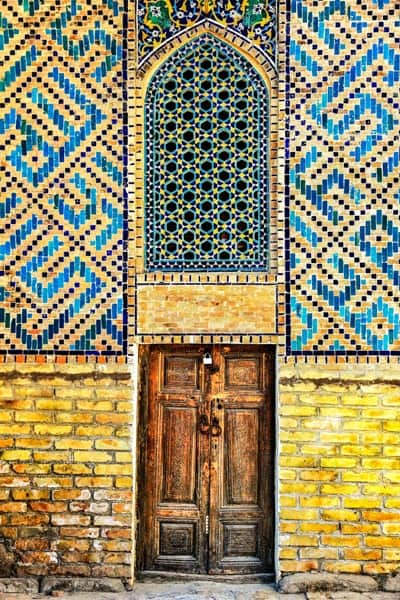 On the left and right are also two beautiful madrassahs. One is Sher – Dor madrassah built to compete in beauty with Ulughbek madrassah.
However, this one had another purpose that is to be revealed. It is the first place where the tigers carrying sun on their back and chasing a dear, the national symbols of modern-day Uzbekistan first appeared. Another madrassah was built shortly afterwards to complete the complex, the Tilla-Kori madrassah. 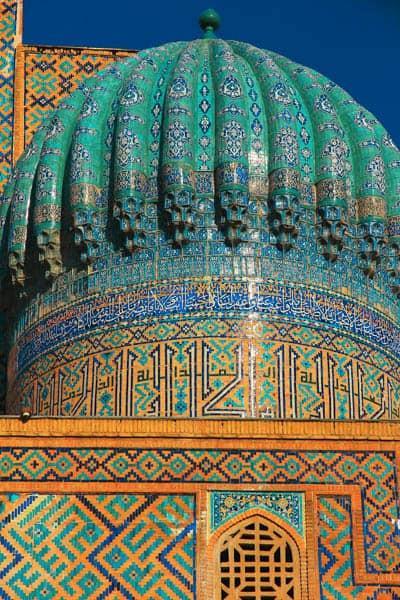 Spend as much time as you can in the area, admire Registan from both inside and outside. Courtyards and small shops scattered all around will keep firing up your imagination and make your research even more fun.

Also, make sure you come back during the evening as then you will be able to enjoy a light show spectacle that is on every night. Music, lights, and people joining to be charmed by Registan will lighten your day. 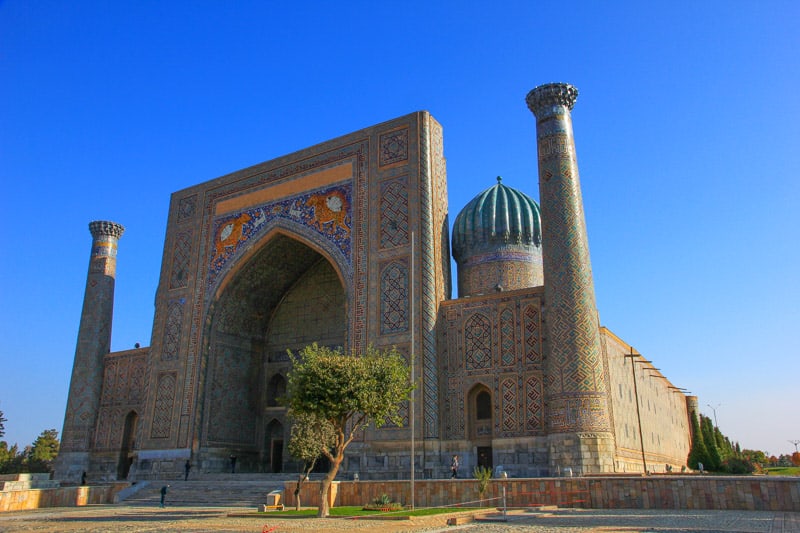 Shai I Zinda is one of the most stunning mausoleums in Samarkand. Build on a bit elevated ground; it is believed to be devoted to one of prophet Mohamed’s cousins. As such, it holds a special place in the hearts of believers. Narrow passageways between buildings, protecting tombs of important people who once lived in Samarkand are mesmerising.
Islamic architecture and art are showing off at this place, and you must pay it a visit. Blue colour, so typical for Samarkand, is spread everywhere in abundance.

Geometrical shapes, delicate and exquisite will be hard to divert your eyes from, and there are so many of them that no matter how many pictures you try to make, you will not be able to catch them all.

One of the striking places in Samarkand is the Observatory of Ulugbek.
At the time Timur was conquering the world, Ulugbek was conquering the stars. He was one of the greatest scientists who made discoveries to awe the world even today. In this very observatory, he calculated the length of one year, i.e. the time the Earth makes its turn around the sun.
His precision was amazing. In the 15th century, he made a calculation that differs from the one we know today, by only 60 seconds.

Take your time to walk around and imagine how it might have been to be a scientist at least four centuries ahead of your time without even knowing it. 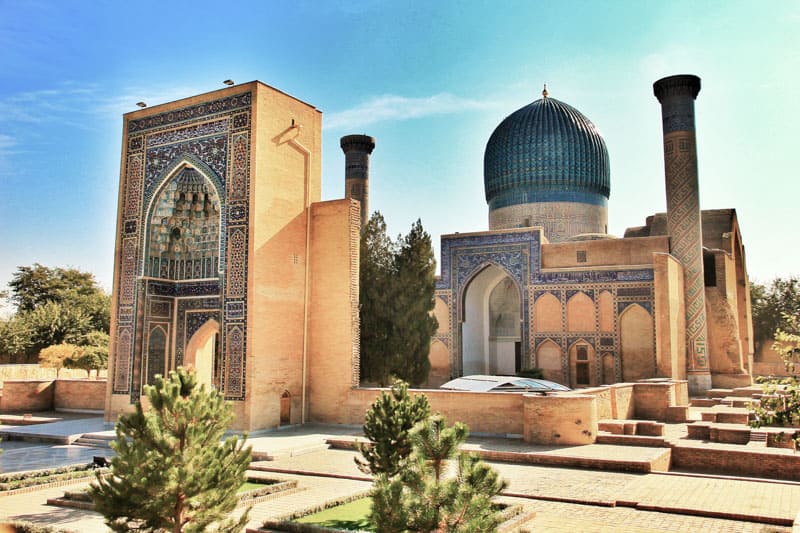 Some say this was the place which cursed and saved the Russian army during World War II. A myth or a real-life event we cannot say for sure, but it is worth a visit.
Gur E Amir holds the tomb of the great Timur, the man who ruled with clear goals and lack of mercy. Before he died, he cursed anyone who would ever tamper with his grave and his remainings. His curse went something like this: ‘Whosoever Disturbs My Tomb Will Unleash an Invader More Terrible than I’.

But some didn’t care about it at all maybe to their expense.

The Russians came and opened the tomb, taking Timur’s remainings to Moscow. Against the warnings of the people following excavations, Russians did not bulk. It was in the middle of World War II, and two days before Hitler attacked Russia. Some say it was because of the course of the notorious Timur.

The battles in Russia continued, and Stalingrad fell under infamous siege. At that point, even communist leader Stalin started to believe it has something to do with Timur and he decided to get the remains back to Samarkand.

And guess what. A month later, Russians won the Battle of Stalingrad and started to push the Nazis back.

Coincidence or not, it is an amazing story that will be in your head once you visit this beautiful place. The interior of the place is decorated with layers of gold and details to take your breath away. Simple, peaceful and minimalistic, the place is living up to the role of the final destination for the great leader.

Bibi Khanym mosque is holding the memory of Timur’s first wife; however, it is still unsure if it was Timur who ordered the mosque to be built or his wife who wanted to surprise him. Regardless, it is one of the most amazing sites in the whole Uzbekistan.
Its construction involved elephants; special stones pulled all the way from India, best craftsman they could find, and killing the supervisors once Timur was back. He didn’t think that the complex did justice to his goal, to make the grandest place to celebrate God and himself. Supervisors were killed and parts which Timur didn’t like, rebuilt expressly.

Come here to continue to marvel to the wisdom and ambition of the last ruler of Samarkand. It will make it easier to understand why, even today, the people of Samarkand praise him as one of the best men who ever joined them.

For all its glory, architecture, history and importance, Samarkand has been enlisted as the UNESCO world heritage site. Islamic architecture, at his best, helped to earn this title. And you will easily understand why.
Samarkand is truly a magnificent, mysterious and almost magical place that a traveller must visit at least once in a lifetime.

Walking around the narrow street, admiring the unique shapes, lines and decorations of Islamic Architecture will take you away and make you wonder how it used to be when Samarkand was at its top.

Mosques, mausoleums, madrassah’s, bazaars all add-in value as a proof that Samarkand once definitely was a centre of the world.