10 Things You Didn’t Know About Bhutan.

The remains of Wangdue Phodrang Dzong, a four-century-old dzong that burned down in 2012. it´s now getting rebuilt

Bhutan probably the most unique country in the world, the small Buddhist Kingdom located in Eastern Himalaya. A place where plastic bags have been banned since 1999, and it´s the only country in the world where the sale of Tobacco is banned!
Bhutan is also where´s the world´s highest unclimbed mountain is located, the Gangkhar Puensum, at 7,570 meters. And it´s by far one of my favourite countries in the world.

The King of Bhutan handed the crown to his eldest son in 2008. At the age of 28, King Jigme Khesar Namgyel Wangchuck became the youngest reigning monarch in the world.

Or did you know that one of the many ways in which Bhutan preserves its culture and traditions is by making its people wear the national dress to schools, government buildings and on all formal occasions.
The traditional dress is called Gho for men and Kira for women.
That’s the most commonly known  “fun fact” about Bhutan, but here are ten other interesting things you probably never knew about Bhutan. 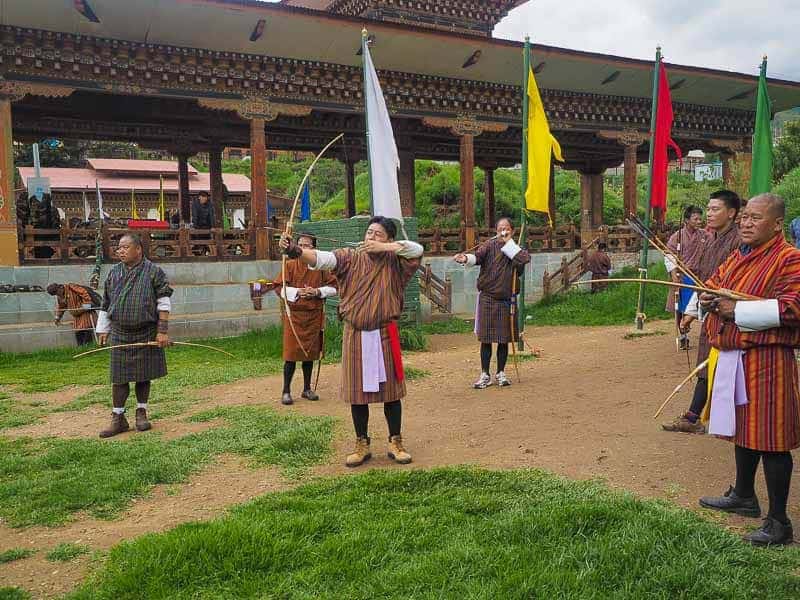 1. Hornets are a most sought-after delicacy in Bhutan.

One of the most particularly sought-after delicacies in Bhutan is a dish made of hornets. It is believed that hornet broods consumed on a regular basis, offer various medicinal values. Hornets are a very rich source of nutritious protein.
Although it is illegal to raid hornet nests – rural folks in Bhutan secretly gather hornet broods for medicinal values. It helps to cure diabetes and lower blood pressure. It is also believed that after a day’s toil, eating a dish of hornets sprinkled over any curry increases one’s appetite, offers a relaxing sensory experience and pleasant sleep.

2. Bhutan is a matriarchal society.

In Bhutan, women are the head of the family and traditionally, the decision-maker as well.
Soon after marrying, a Bhutanese husband must settle into his wife’s family in her house. The age-old tradition of passing down an inheritance to daughters alone highlights the fact that Bhutan is a matriarchal society.
A former governor of a district says that while having meetings with the rural folks, he preferred the woman of the house to attend the meetings. He claimed that men would not take instant decisions.

Up in the highlands of Bhutan, a nomad women are entitled to have more than one husband. The husbands are usually brothers.

Marijuana has a different place in Bhutan. It is harvested as fodder for pigs and grows wild all over towns and villages.
Farmers in the Eastern and Western parts of Bhutan feed marijuana to the pigs. It is claimed that farmers feed pigs marijuana as fodder because of local preference for pork that is fatty.

Marijuana inebriated pigs tend to sleep more and grow fatter faster. It is also believed that the meat of such pigs is tastier than that of pigs fed with conventional fodder. However, this practice is now not as common as it used to be.
Most rural homes have stopped raising pigs as pork can now be purchased from the market.

4. Bhutan is the only carbon-negative country in the world.

Bhutan sets an environmental benchmark as the only carbon negative country in the world. A fact about Bhutan as a carbon sink that is overwhelmingly impressive is that the nation emits only 1.5 tons of carbon annually while its forest cover absorbs more than 6 million tons. 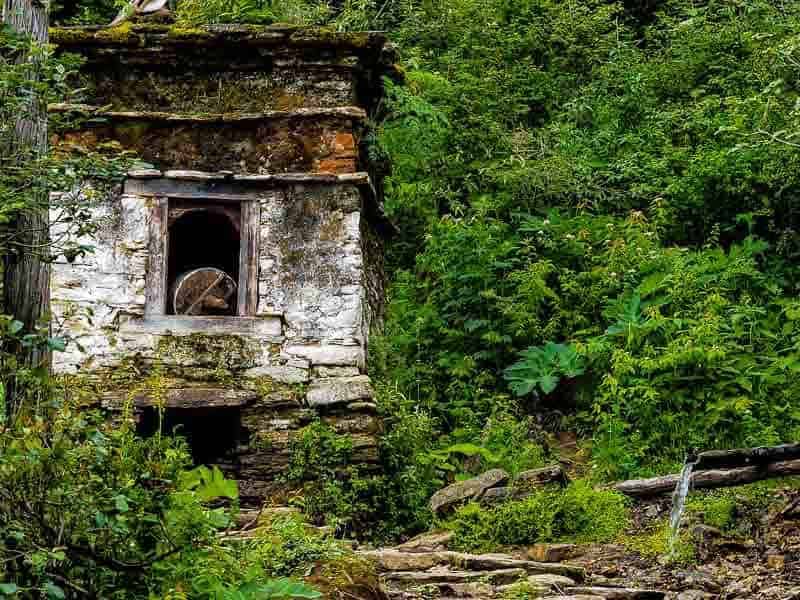 Nature is taking over.

This is a ratio that not even the highest carbon sink in the world, the Amazon rainforest, can match.
Planting 108,000 trees in an hour to commemorate the birth of His Royal Highness Prince Jigme Namgyel Wangchuck by 100 volunteers in Thimphu set a Guinness world record in 2016.

Meanwhile, the constitution of Bhutan mandates the country to preserve at least 60% of forest cover at all times.

5. There are no traffic lights in Bhutan.

Not even the capital city, Thimphu, which is the most populated and busiest urban centre, has traffic lights to control the traffic.
If you wander around Thimphu and spot a man draped in a blue uniform in a cylindrical shelter making elaborate hand gestures, don’t mistake him for dancers. He is just controlling the traffic.

The discovery of tigers existing at 4,000 meters above sea level here in Himalaya has given the world renewed hope for tiger preservation.
The forests of Bhutan are delineated into six nature parks and reserves.
These are all connected by biological corridors.
It is reasoned that such connectivity has allowed the Royal Bengal Tigers to roam as high as 4000 meters. In March 2018, a tiger was spotted roaming in the outskirts of Thimphu, the capital of Bhutan.

After the discovery of tigers here in the land of The Thunder Dragon, the World Wildlife Fund (WWF) in Bhutan and other relevant stakeholders undertook numerous initiatives to preserve these magnificent cats in Bhutan.

In Bhutan, bear attacks top the list of human-wildlife conflict situations. To prevent bear attacks, when people walk through forests alone or in a group, they usually go about shouting along the way to ward off the wandering bears.
Out of the three species of bears in Bhutan- Sloth bear, Brown bear and Himalayan black bear, the Himalayan black bears are chiefly encountered in human-wildlife conflicts taking the lives of their victims or injuring them irrecoverably.

8. No iron nails in any of the massive traditional structures.

The amazing Punakha Dzong is built without a single nail.

9. The penis is revered as a religious symbol.

Phalluses are everywhere in the land of the thunder dragon. They are painted on the outer walls of houses and temples. Some are hung from the rooftops or find pride of place on altars. The open show of phalluses is not offensive in Bhutan.

It is rather seen as an object of religious reverence that drives away evil spirits. The phallic symbol is often associated with the 15th-century mystic, Drukpa Kuenley although it predates him.
Drukpa Kuenley was a revered monk often referred to as a madman for his unconventional ways of propagating the teachings of Buddha. He also founded the famous fertility temple. 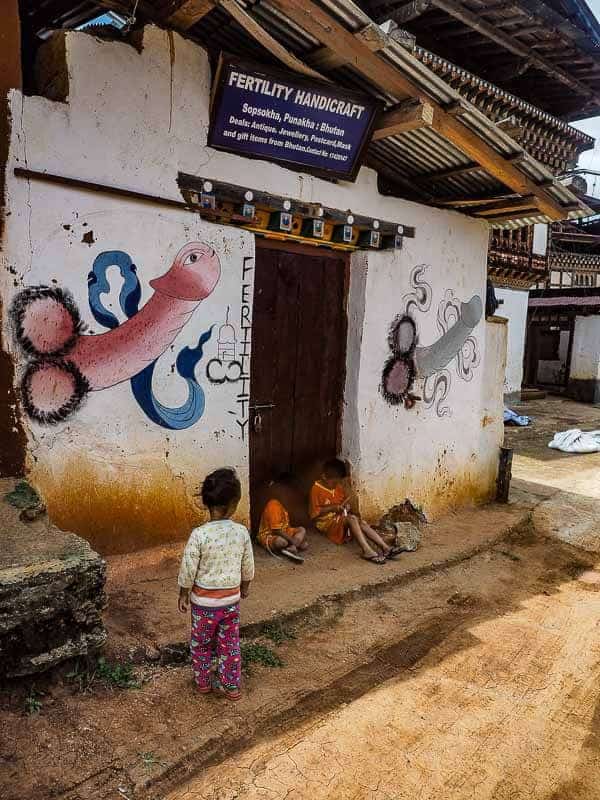 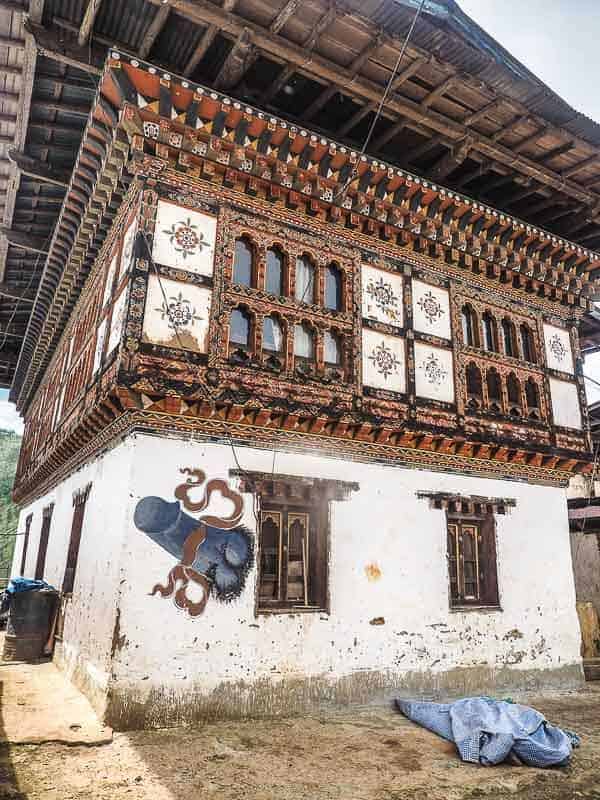 Comes in all shapes and colours

The temple blesses infertile couples with a child.

One can imagine Drukpa Kuenley in these few lines of one of his poems: “I am happy that I am a free Yogi. So I grow more and more into my inner happiness. I can have sex with many women because I help them to go the path of enlightenment.
Outwardly I’m a fool, and inwardly I live with a clear spiritual system. Outwardly, I enjoy wine, women, and music”.

There are only stories told about yeti and no real evidence to prove its existence. This elusive highland creature has been the subject of many a world-renowned exploratory expedition.
Once such search conducted here at the turn of the century produced a hair that was DNA-tested and the test concluded only that the hair belonged to “no known or recorded species.” 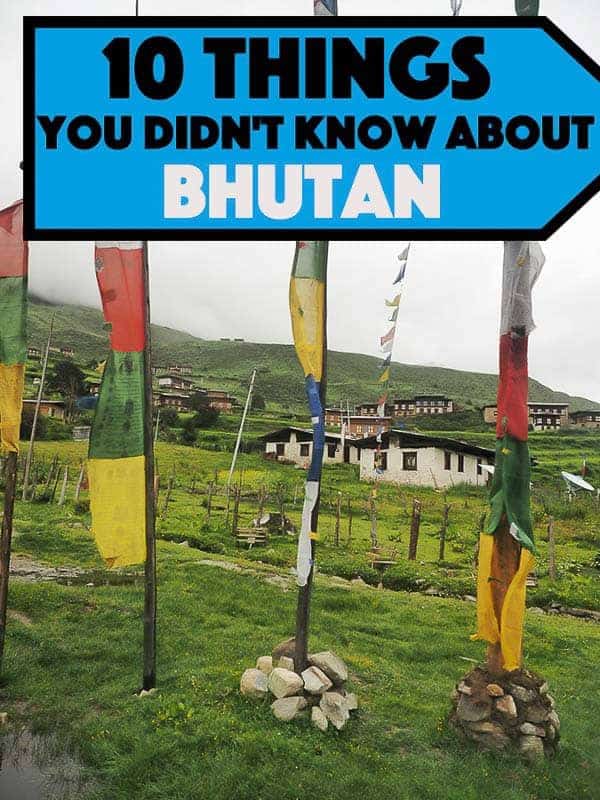 Bhutan is probably the most unique country in the world, the small Buddhist Kingdom located in Eastern Himalaya. A place where plastic bags have been banned since 1999 and a ban on smoking tobacco has been illegal since 1916. Here are ten interesting things you probably never knew about this small country in the Himalaya

It was nice and good fact about this tiny Himalayan kingdom. This small country is Well known for its GNH(gross national happiness). Any way, thanks for sharing this information. It's really amazing country in the world!

Your blog posts are fantastic. As an aspiring travel blogger, I can only wish to record my travels as well as you do!

Thanks for sharing the Information. It's really worthy. I can see your effort in writing this