The landlocked mountainous “country” of Nagorno-Karabakh is the subject of an unresolved dispute between Azerbaijan, in which is located and its ethnic Armenian majority.

Nagorno-Karabakh is technically a country that doesn’t exist, but you still need a visa to visit it.

Nagorno-Karabakh is, in fact, an independent republic located in South Caucasus, bordering south-east Armenia. It is officially a part of Azerbaijan but under Armenian control.
Be careful if you are planning to visit Azerbaijan on the same trips as your visiting Nagorno-Karabakh. Azerbaijan will refuse your visa application if they can see you have been to Nagorno-Karabakh.

So if you’re planning to visit both places, you should visit Azerbaijan first since it doesn’t recognize the legitimacy of it as a country.

The territory remains internationally recognized as part of Azerbaijan, which has not exercised power over most of the region since 1991. Since the end of the Nagorno-Karabakh War from 1988 to 1994.

One of the most interesting places to visit is the Ghost Town “Agdam” it was a city in Southern Azerbaijan.
Today the city, which bustled with life just 15 years ago, is under Nagorno-Karabakh control, completely deserted and in ruins; it is known as the “Hiroshima of Azerbaijan” and is under Armenian control.

The official travel advice for Nagorno-Karabakh is to stay away from the city of Agdam, due to its close proximity to Azerbaijan border. But that´s no fun.

But to reach Agdam, you first have to reach the capital city of Nagorno-Karabakh, Stepanakert.

Stepanakert it’s not a big city, the population is no more than 55.000, So it’s easy to walk around and see the whole city in a few hours.
This city offers a few nice sights like the Artsakh University, Stepanakert Dramatic Theatre and small and nice park around the Shahumyan square. 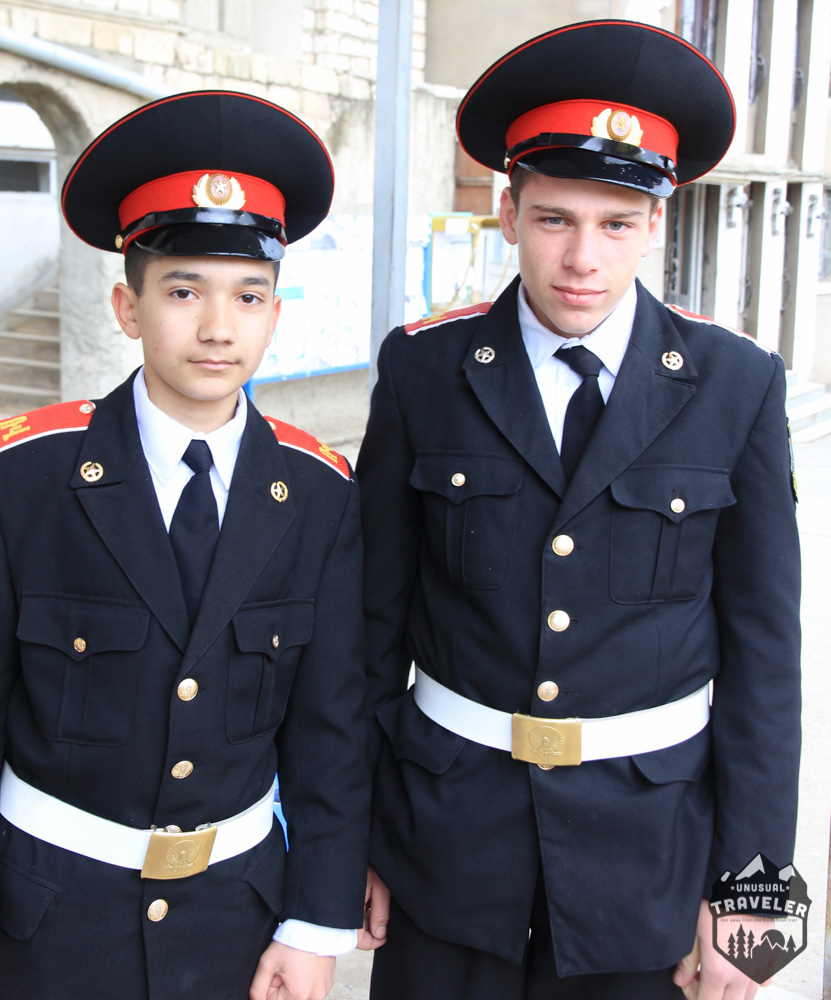 two very young locals in Stepanakert, They were in training to become police officers

For some reason wasn’t allowed to take any photos of the city, every time I took out my camera I was told by a police officer to put it away. So the only photo I have from Stepanakert is a photo from one of the backstreets. 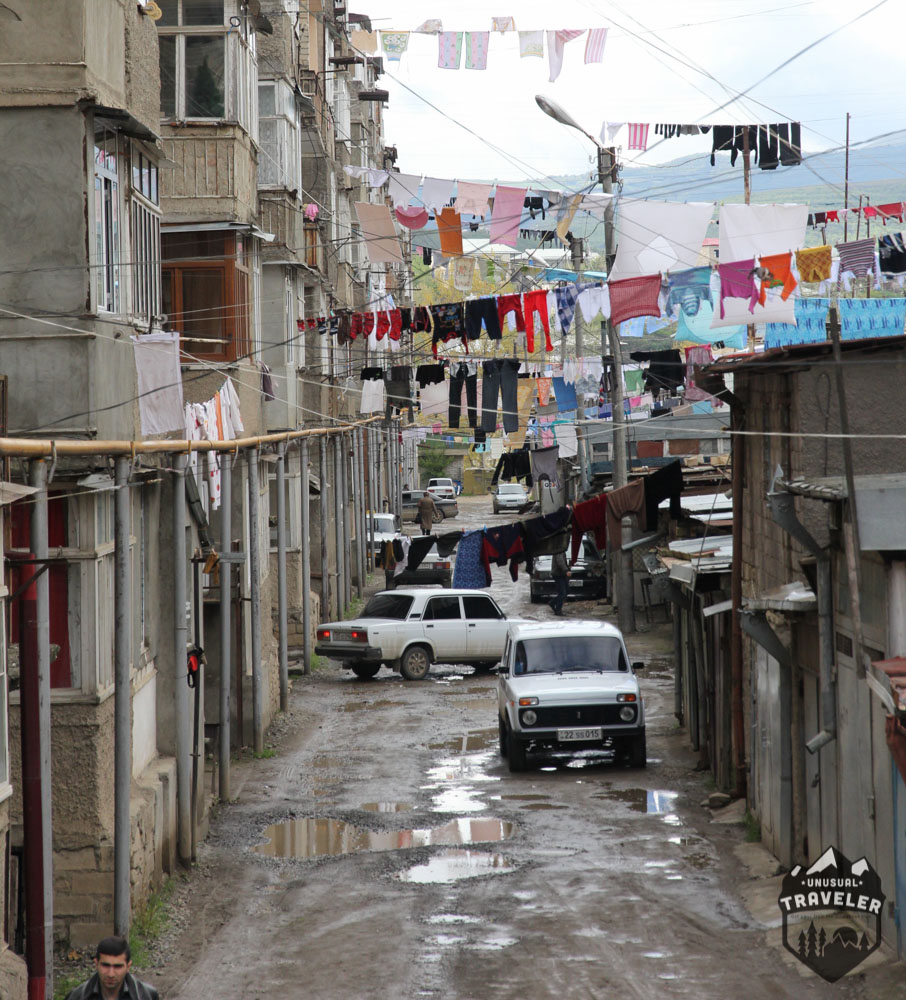 Stepanakert back streets, grey and depressing

One thing you can see and take photos of is Grandma and Grandpa statue, the most famous sight in all of Nagorno-Karabakh 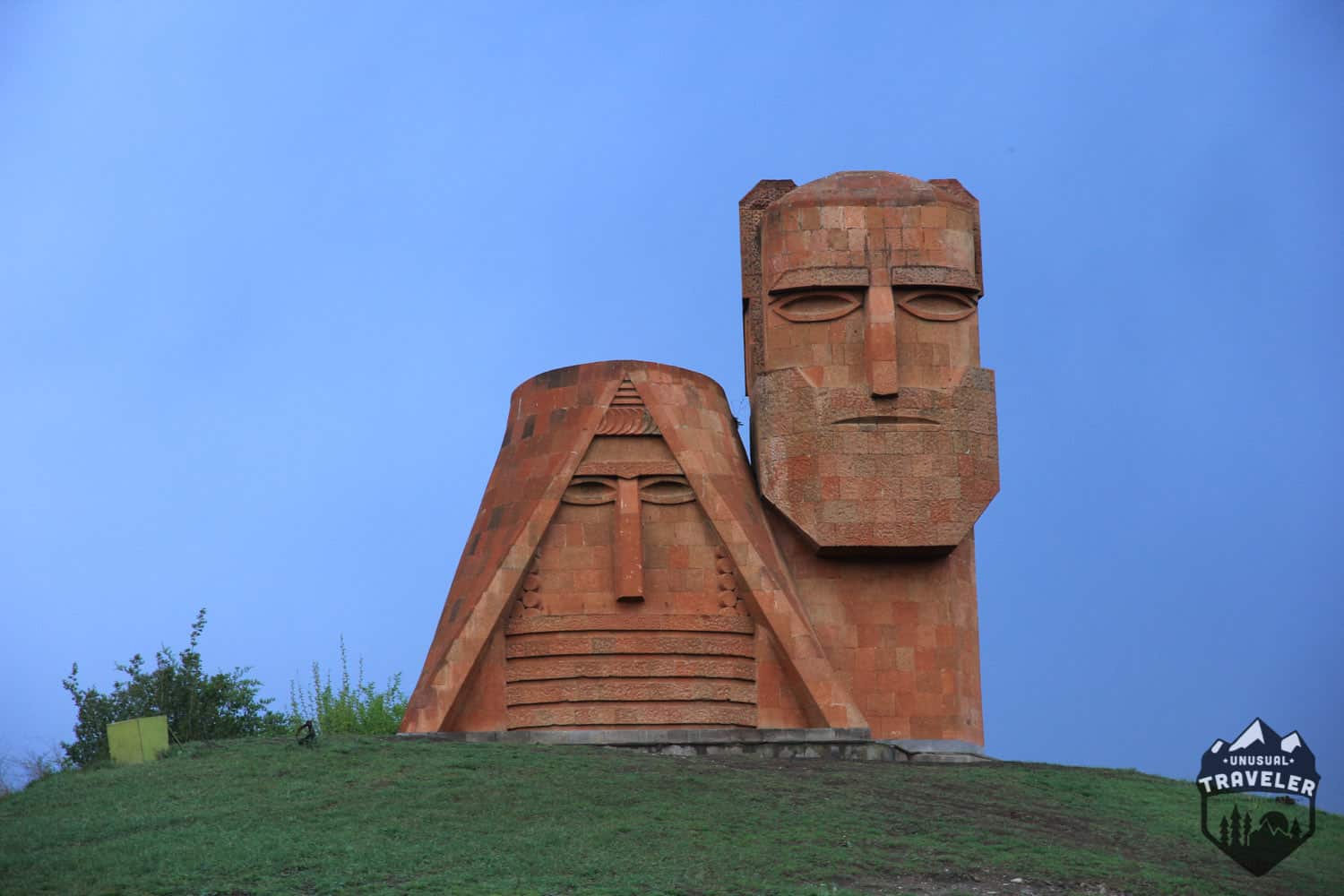 Grandma and Grandpa, the memorial features an elderly Artsakh couple.

The statue is located an easy 20min walk outside Stepanakert.

But back to my visit to the ghost town of Agdam.
There is no public transportation to Agdam, so the only way to get there is by taking Taxi, you might have to ask a few taxi drivers to take you there since the first 3 I asked refused to take me. They told me it was too dangerous, luckily the 4th driver I asked was willing to drive me there. I paid 10Euro for a return trip. 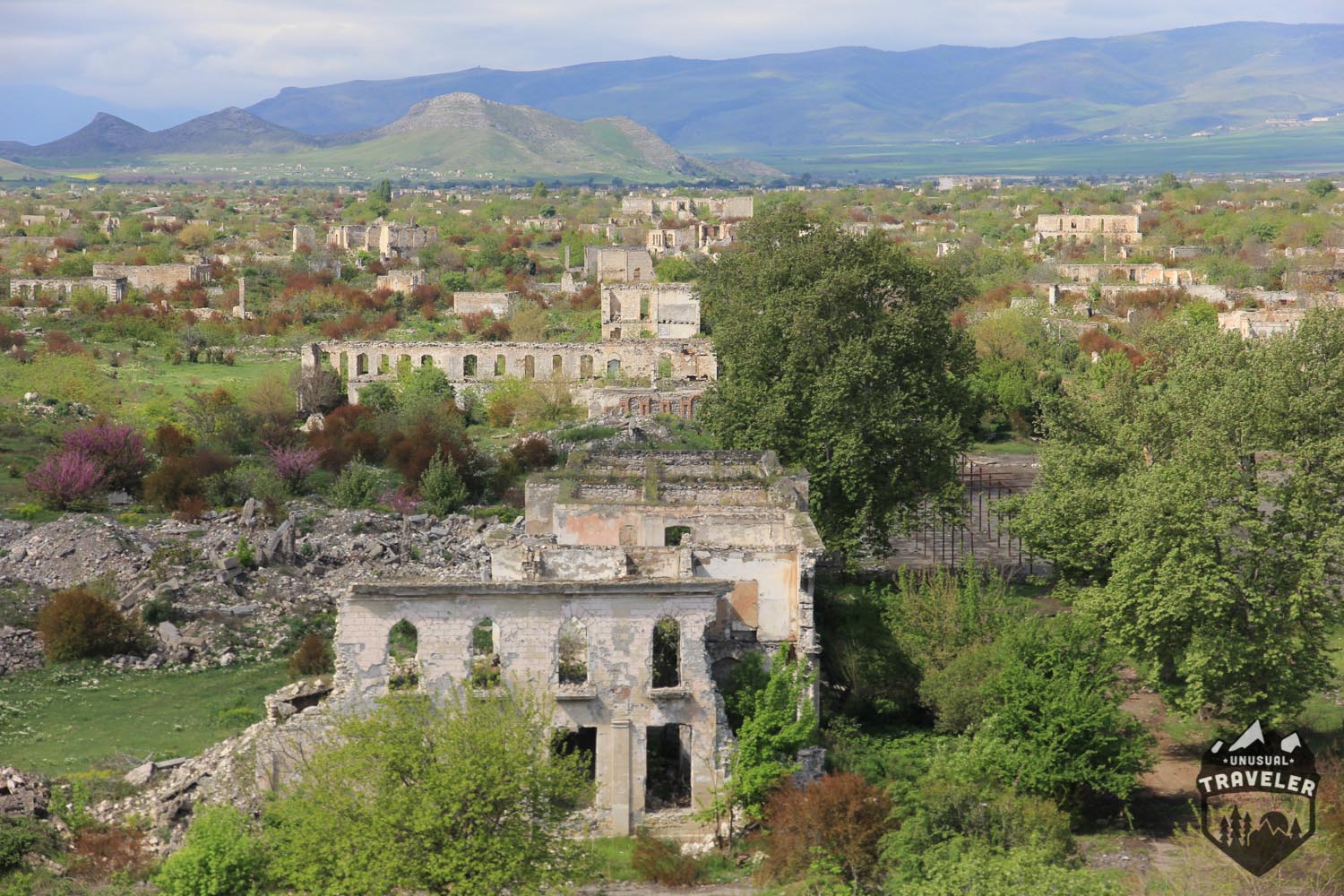 The ruins of Agdam. 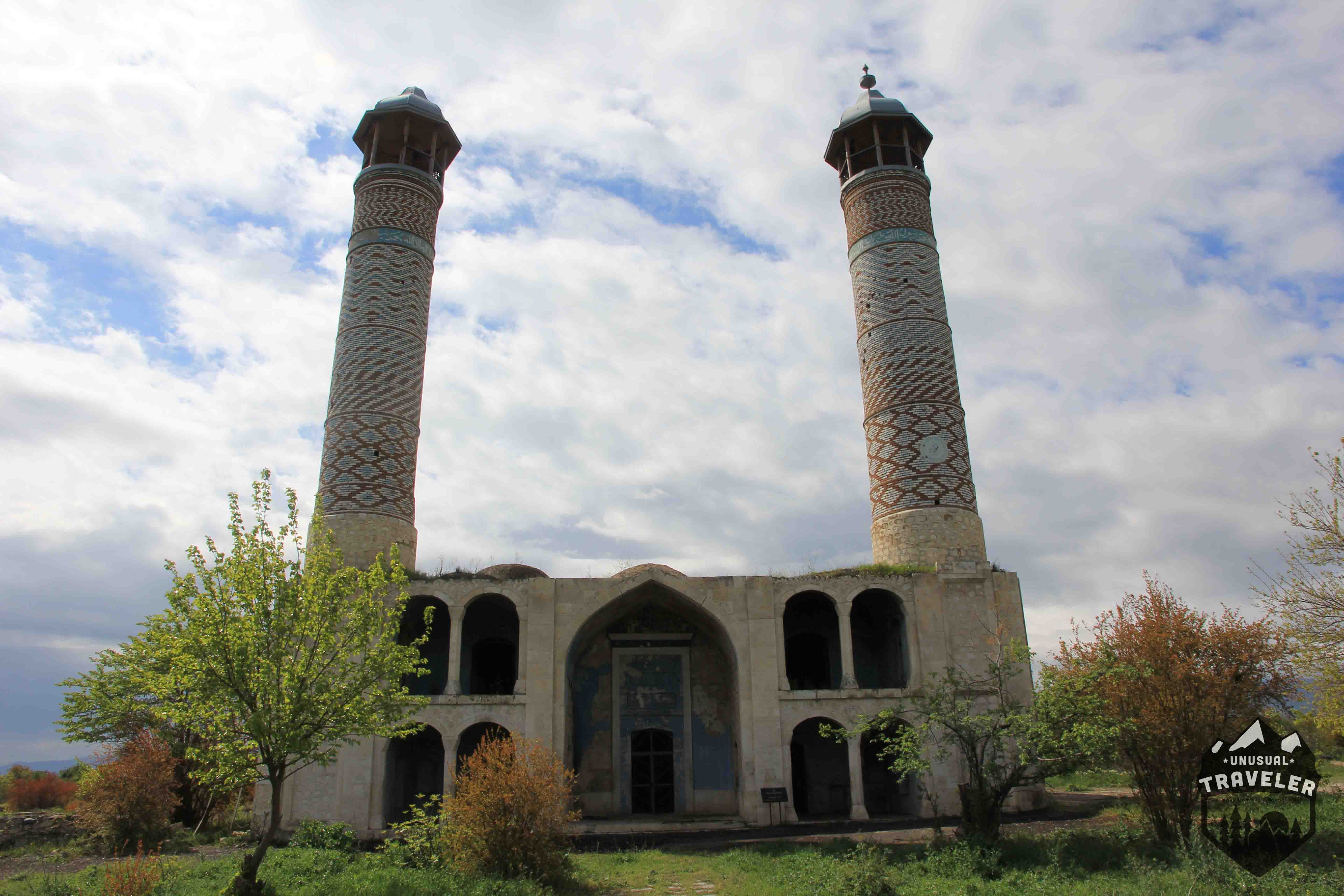 The Agdam Mosque was one of the few buildings not destroyed during the siege. The first floors are inhabited by cows these days, but you can climb one of the minarets. From the top of the minaret, you will see most of the abandoned city.

There is still a lot of military around Agdam, but they were friendly enough, and they invited me over for a cup of tea.

You will need to get a visa/permit to enter Nagorno-Karabakh, the visa/permit is a full page sticker in your passport (you can get it on a separate piece of paper if  you want)
You can get the visa/permit from Permanent Mission to the Republic of Armenia, 17A Nairi Zaryan St, In Yerevan the capital of Armenia.
Tourist visas cost 3,000 Armenian drams (10 US$ or 6 €) and are usually valid for 21 days after issue.

Or you can get in upon arrival at the Armenia/Nagorno-Karabakh border.

It will be easier to obtain the visa in advance if your planning to travel by bus. There is a big change the bus won’t wait for you at the border while you are getting the visa.

How to get to Nagorno-Karabakh

There is one daily bus from Yerevan to Stepanakert, leaving from the main bus station in Yerevan, the price is 4300Dram (about 9usd) the ride takes about 8 hours.

Also, you can find a few shared minibuses and taxis going a day, they work on no fixed time and will leave when there are enough people.

Hitchhiking is also easy. While I took a shared minivan to reach Stepanakert, I hitchhiked back to Armenia without any problems.

There are tons of homestays and even a hostel in Stepanakert.
I can not recommend any particular place to stay only because there was no name or sign on the place I stayed.
But I paid 5usd for a full apartment as a homestay that included kitchen and I was the only one there.

The official currency of Nagorno-Karabakh is the Armenian Dram (AMD).
1USD = 480Amd.
Dollars, Euros and rubles can be exchanged almost anywhere in the country-
Exchange booths do not charge a commission and rates are almost always quite honest.
ATMs are available in larger towns. But they are often empty. 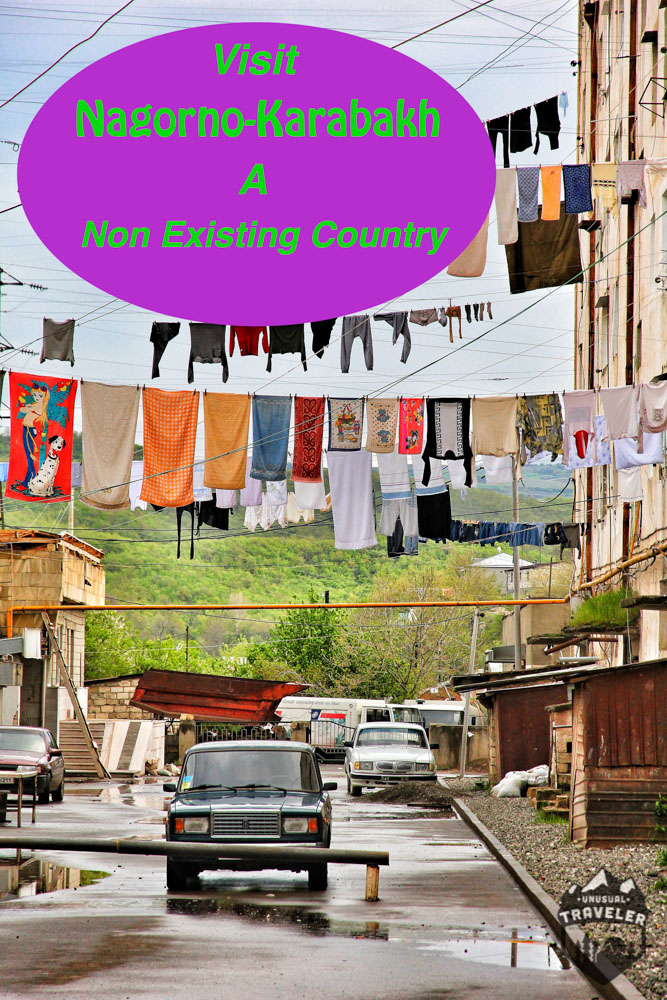