New Delhi, is not only Indias largest city and capital is also the world’s 4th largest city’s when it comes to population.

New Delhi is one of the oldest city’s in the world with its history stretching back to at least 6th BC.

So it’s no surprise that New Delhi got tons to offer, from historical World Heritage sights, modern architecture,  to the smells, colours, and madness that you usually would think of when you hear about India’s capital. 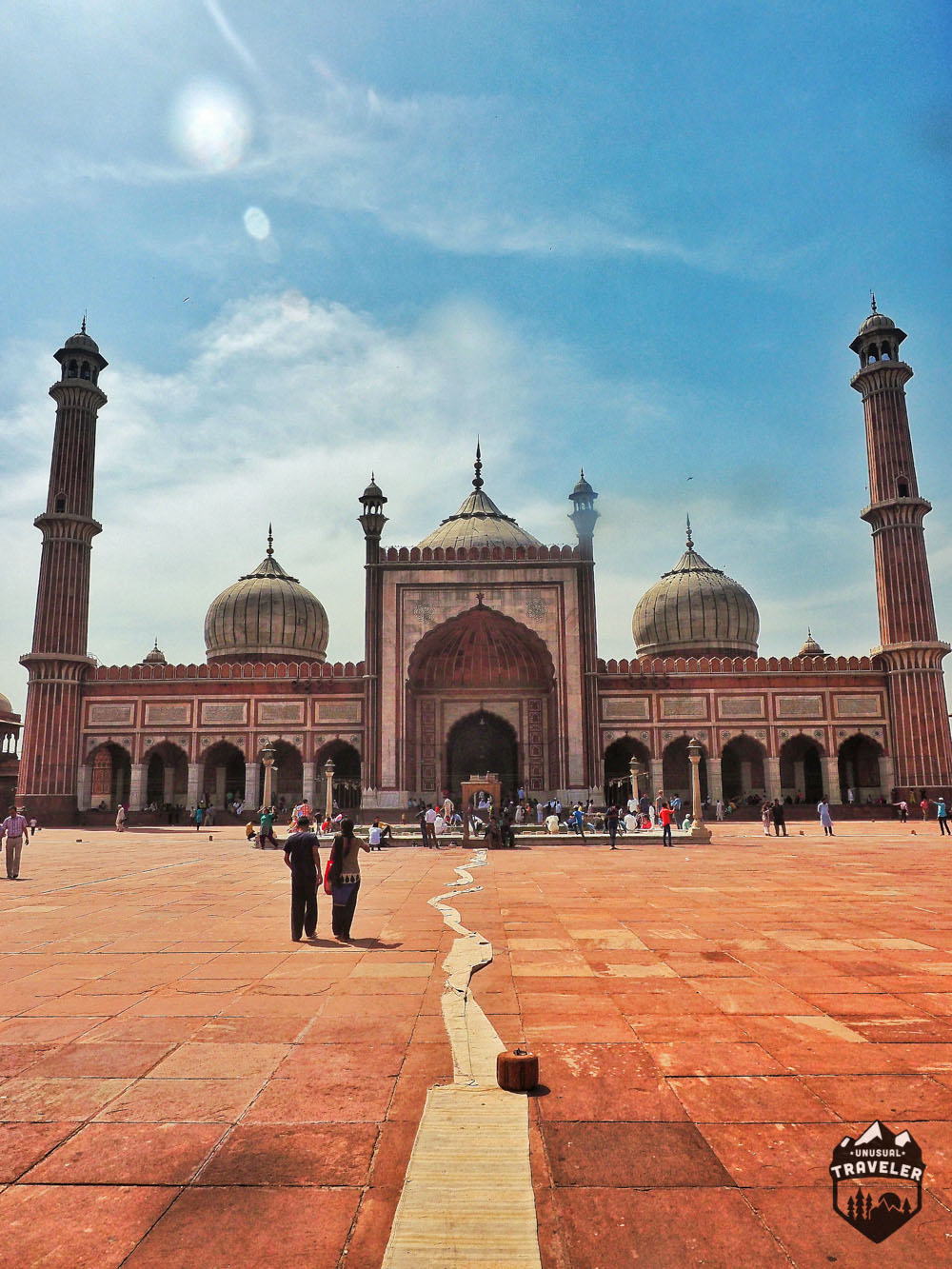 Most people have a love and hate relationship with New Delhi,  I know Indians that refuse to visit their own capital, and I know foreigners that live there.

If you a woman and planning a trip to India, be sure to check out this guide: What to wear in India: A packing guide for women

I have been coming to New Delhi and India since 2009, and I can easily say that things have changed drastically in the city over the years, from having a non-existing public transportation system to now, one of the best subway systems in the world.

If you want to see the Mighty Bengal Tiger during your visit to India, be sure to visit Ranthambore National Park which is only about 4hours south of New Delhi with a train.

Are you planning a trip to Mumbai and looking for a travel guide? Click here to read Mumbai(Bombay) City Guide: India’s City of Dreams.

Another thing that has changed over the years is it now neither, the awful tuk-tuk drivers, tuts or scam artists that are the biggest annoyment to foreigners, now in 2016, is it the Indian government itself that cheats tourists the most, with some utterly ridiculous ticket prices to visit sights around the city.

Looking for ideas for weekend trips from Delhi? Be sure to check out this great guide.

Some of the entrances fees are now so high, that’s its some of the sights that are not worth visiting anymore. All the sights around New Delhi are easy to reach with the metro except for 2-3 sites

Top Things To Do In New Delhi

The world-famous Lotus temple is made of pure marble and is shaped like the lotus flower, the universal symbol of the four religions: Hinduism, Buddhism, Jainism, and Islam.

The temple is open to everyone, but you’re not strictly not allowed to take photos inside the temple, the lotus is surrounded by a big green park, its a very relaxing place, but get there early in the morning, before the crowds start to arrive. 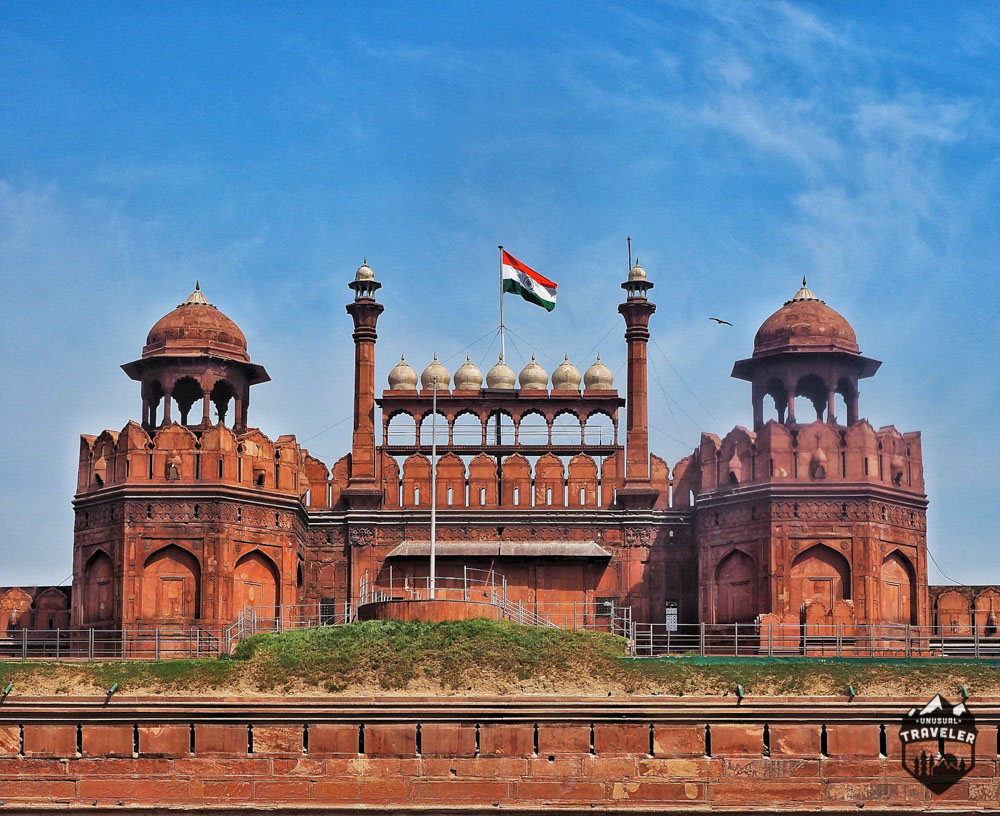 The Red Fort is probably the most famous sights in New Delhi; it´s one of the most important buildings in Indian history, it was constructed in 1648 by the fifth Mughal Emperor and become the home to the Mughal emperor of India for nearly 200 years, until 1857.
It became a Unesco world heritage site in 2007.

Nearest Metro Station: Chandni Chowk (Yellow Line).
Opening Times: Tue-Sun 9:30 AM – 16:30, Mondays closed.
Entry Fee: 500 Rs for foreigners, 10Rs for locals.
Worth a visit? 6/10. It´s actually more impressive from the outside than inside. 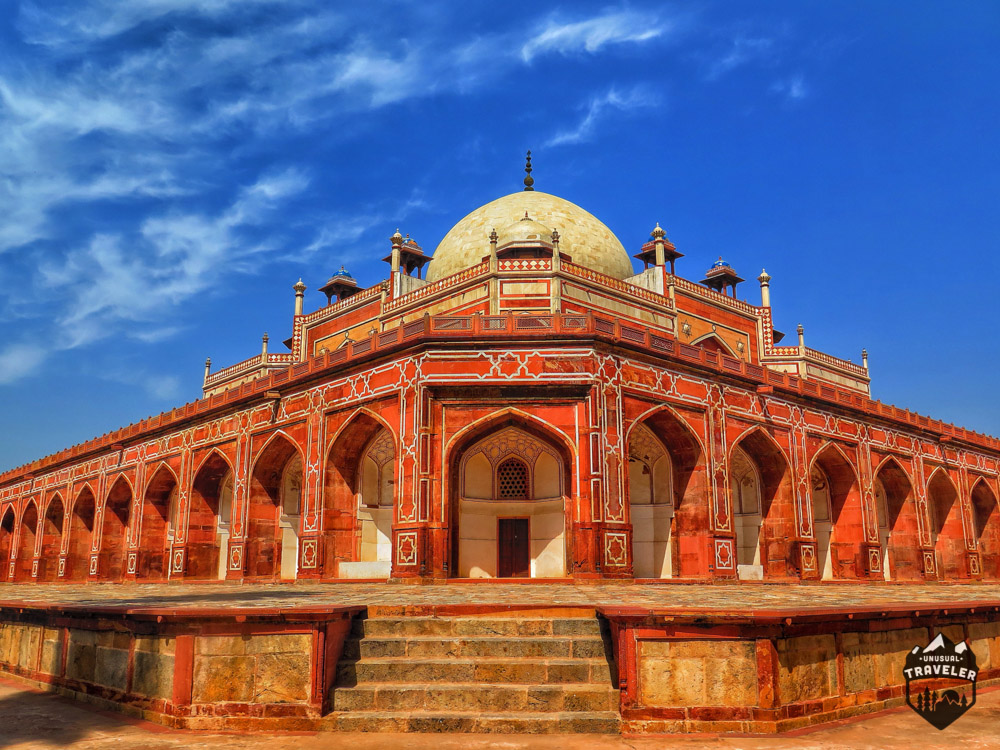 Humayun´s Tomb was constructed in 1565 – 1672 and is the resting place for the second Mughal emperor.
It was the first garden-tomb on the Indian subcontinent.
It’s now one of the best-maintained places in Delhi, and it became a World Heritage site in 1993 Lodhi Garden is not only the most peaceful parks in central New Delhi, the park it “dotted” with ancient tombs and other buildings dating back all the way to 1444.
It´s the perfect place to hide away from the crazy traffic and hassle in New Delhi for a few hours. 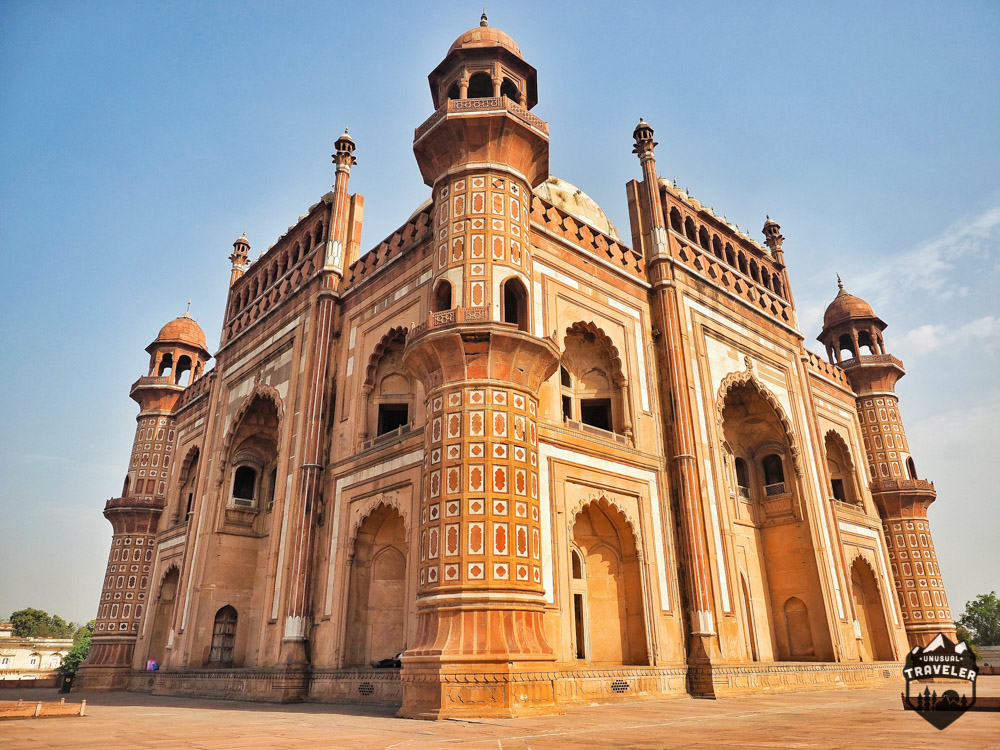 Safdarjung Tomb is an impressive tomb built in red sandstone; it was the last garden tomb of the Mughals empire constructed in 1753- 1754. I personally prefer this tomb over the other tombs that are around New Delhi.
Tomb of Safdarjung is located just across the street from Lodhi Gardens. Jama Masjid is the largest mosque in India and can hold up to 25 000 people during prayer!
The mosque was built between 1644 and 1656. The Mosque is located only a short walk from “Red Fort.”
Tourists are not allowed inside during praying seasons.

At the centre of New Delhi, is India gate, one of the landmarks of the city.
It commemorates the 70,000 Indian soldiers who lost their lives fighting for the British Army during World War I.
The monument bears the names of more than 13,516 British and Indian soldiers killed in the Northwestern Frontier in the Afghan war of 1919. 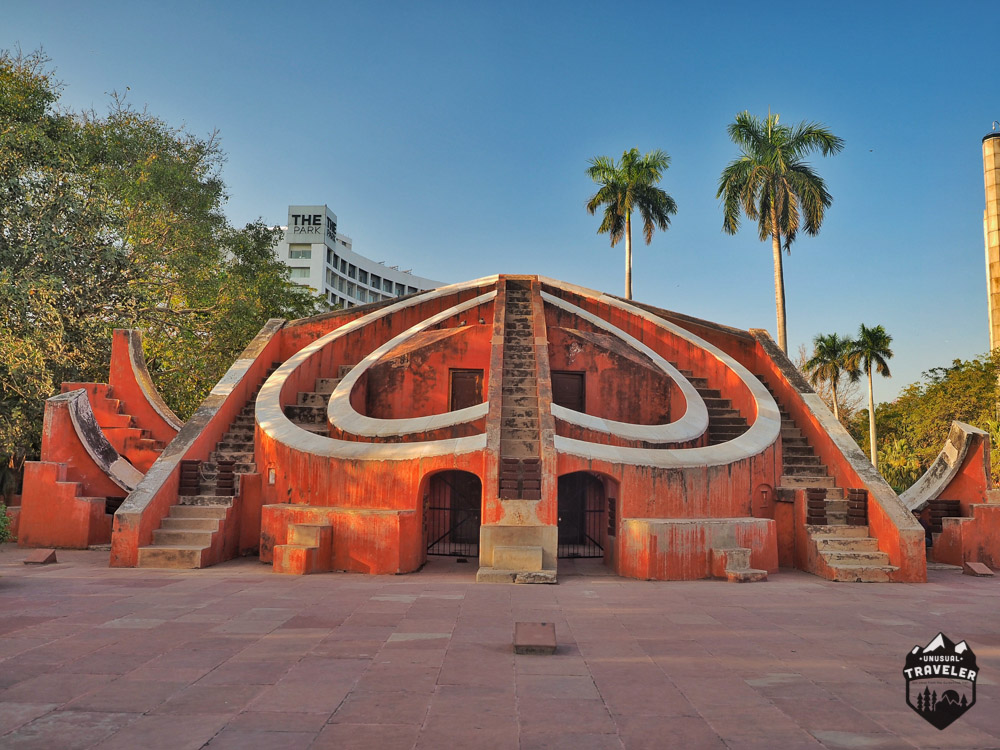 Jantar Mantar is an old astronomical observatory, it was constructed in 1724 and was one of 5 observatories designed by Jan Singh 2.

The four others are located in Jaipur, Ujjain, Mathura, and Varanasi. 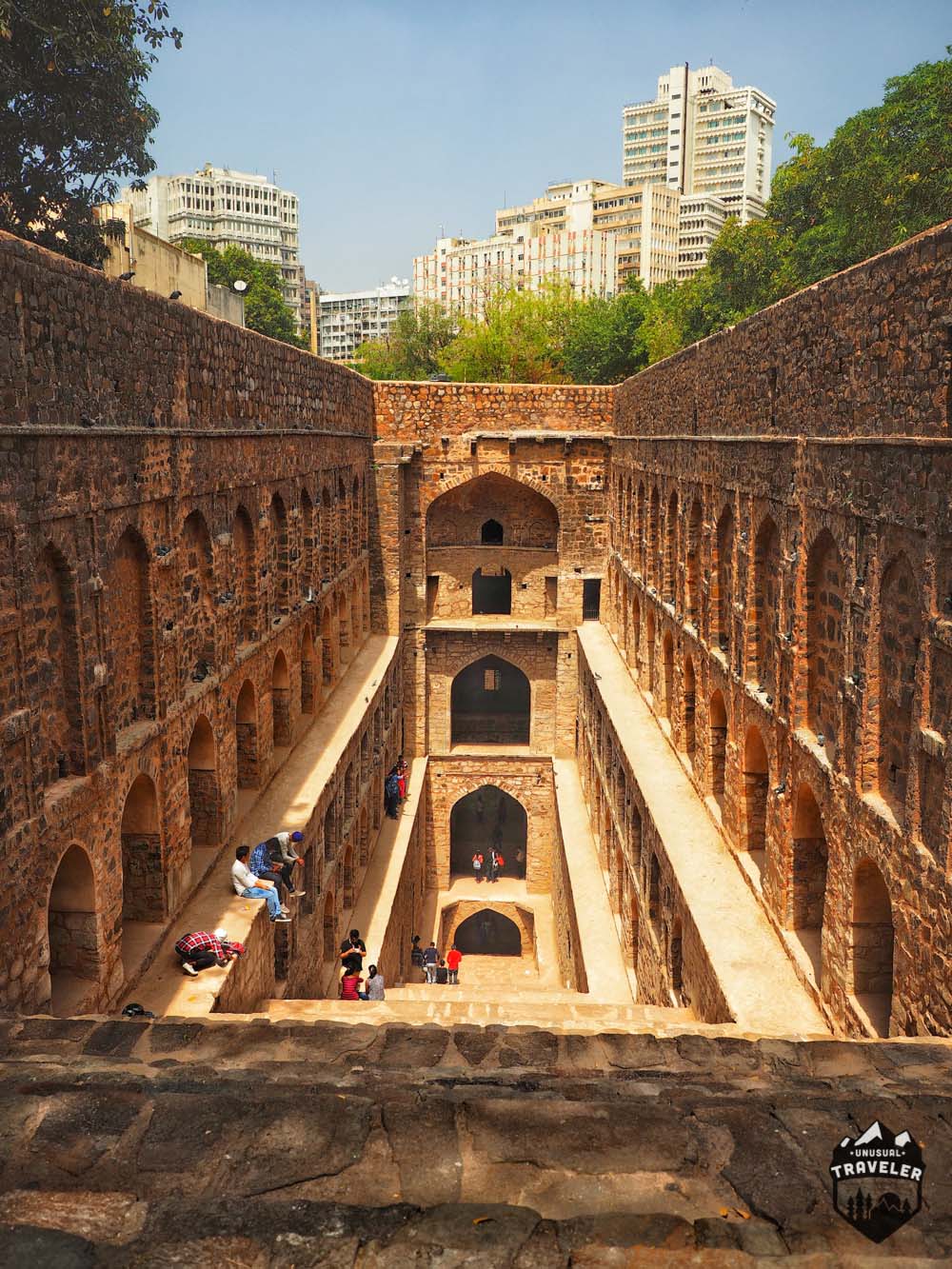 Agrasen ki Baoli is 103 steps deep, steep well right in the middle of New Delhi.
There´s are no known historical records about who built Agrasen ki Baoli, but it is believed that it was originally built by the legendary king Agrasen during the Mahabharat (3124 BC) period and rebuilt in the 14th century.

It´s very surprising that an ancient site like this can survive in the middle of one of the most expensive areas of New Delhi, it’s literally surrounded by skyscrapers.

PS. The places it’s said to be haunted. 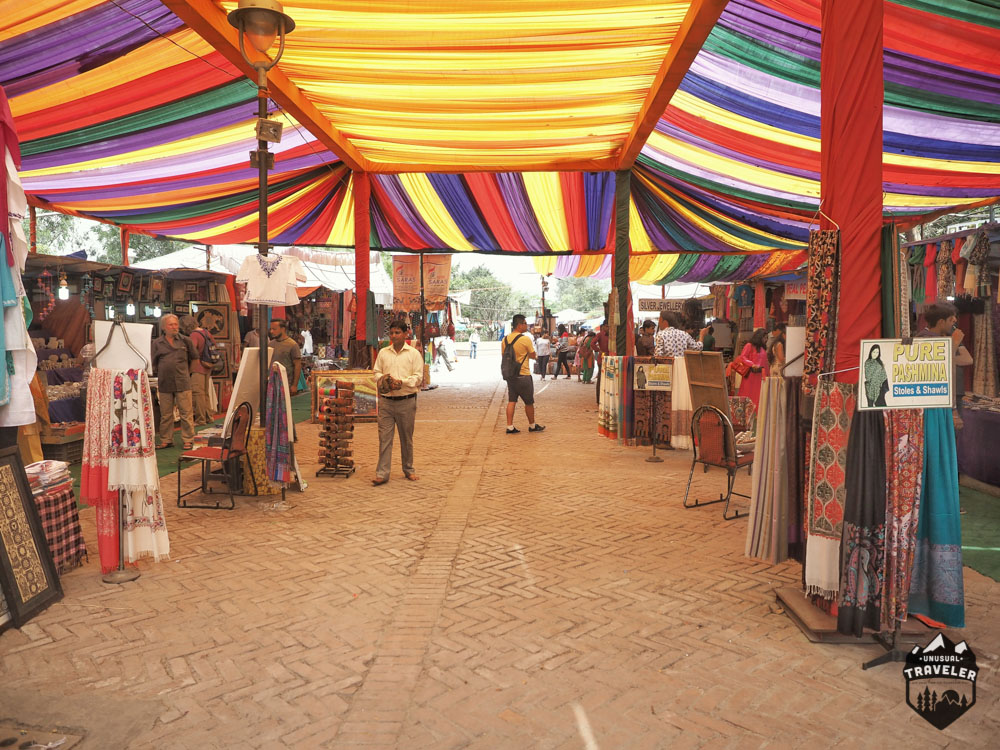 Dilli Haat is not really a sight.
It’s a permanent open-air market that has stalls from every state across India selling local traditional art and fabrics.
There´s an own section that sells authentic food from all around the country (I had the best momos that I have ever had in India from the Arunachal Pradesh stall) 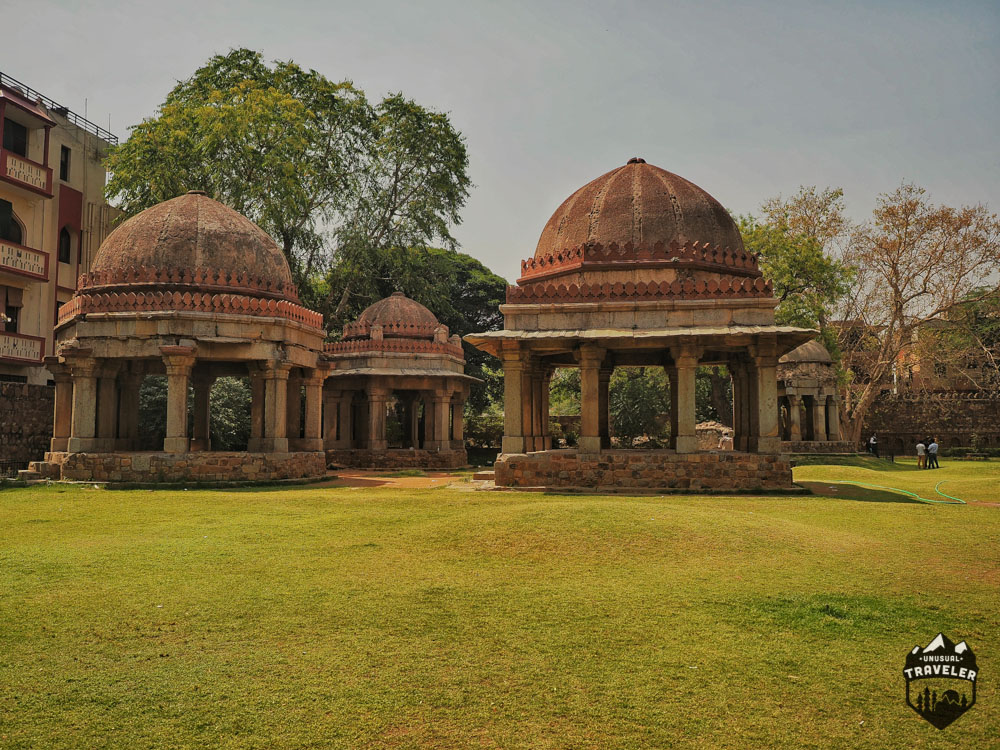 Hauz Khas is not only one of New Delhi’s hippest areas.
The name Hauz Khas comes after an ancient water reservoir, and there are tombs of Muslim royalty from the 14th to 16th centuries around the park.
Just outside the park is Hauz Khas neighbourhood, some of the happiest places to go out drinking or enjoy food in New Delhi is in this area.

One of the bars offered UNLIMITED beer for 300 Rs. A good reason to visit the place on its own. The spot where Gandhi got cremated.

Raj Ghat is Gandhi’s memorial.
The black marble platform that marks the spot of Mahatma Gandhi’s cremation on 31 January 1948. 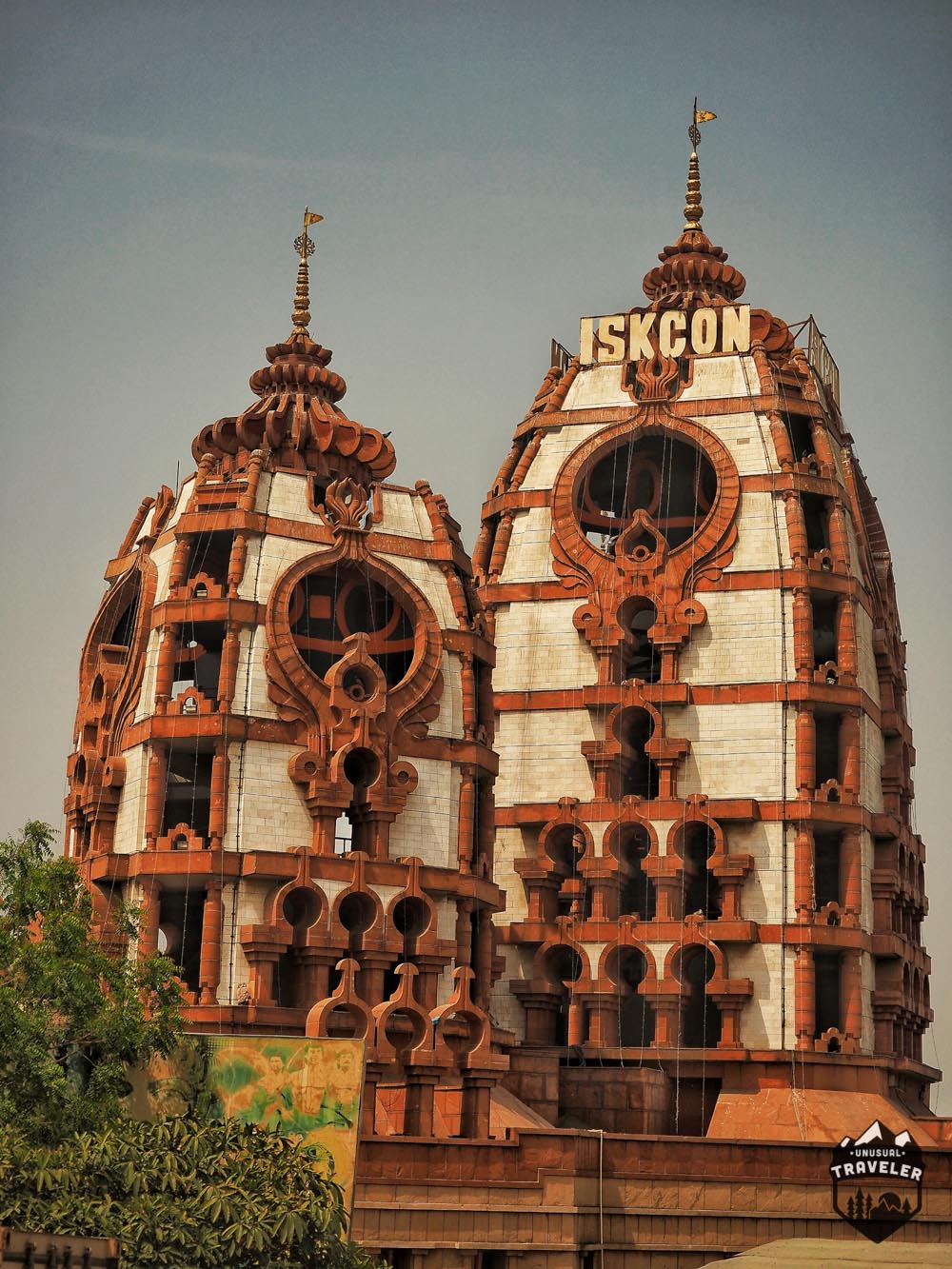 ISKCON or International Society for Krishna Consciousness.
Is the main Lord Krishna Temple in New Delhi, its located only a short walk from the Lotus Temple.

Akshardham is a fantastic looking Hindu temple, the whole complex is absolutely stunning, and it´s said that 70%! of all tourists that visit New Delhi visit Akshardham.
It´s not an old temple, it got open only back in 2005, but it’s still definitely worth a visit.

PS. There’s a strict no-photo rule of the temple; there´s a big fence surrounding the whole complex so you can’t even take proper photos from outside.
Your not even allowed to bring your mobile phone to the complex (There´s a SAFE locker room outside)

Qutab Minar is a 73 m-high tower and called the world’s first skyscraper; it was built all the way back in 1193 by Qutab-up-din Aibak immediately after the defeat of Delhi’s last Hindu kingdom. It´s a world heritage site.

Qutab Minar is one of the highlights in New Delhi; it’s just a shame that the entrance price got raised to a ridicules 500 Rs for foreigners on 1.April

Purana Qilla is the oldest fort in New Delhi, and it dates back to around 1000 BC. The walls around the fortress are up to 18 meters tall and traverse about 1.5 km.

Nizamuddin Dargah is the world-famous mausoleum for the world’s most famous Sufi saints, and it’s visited by thousands of Muslims every week. 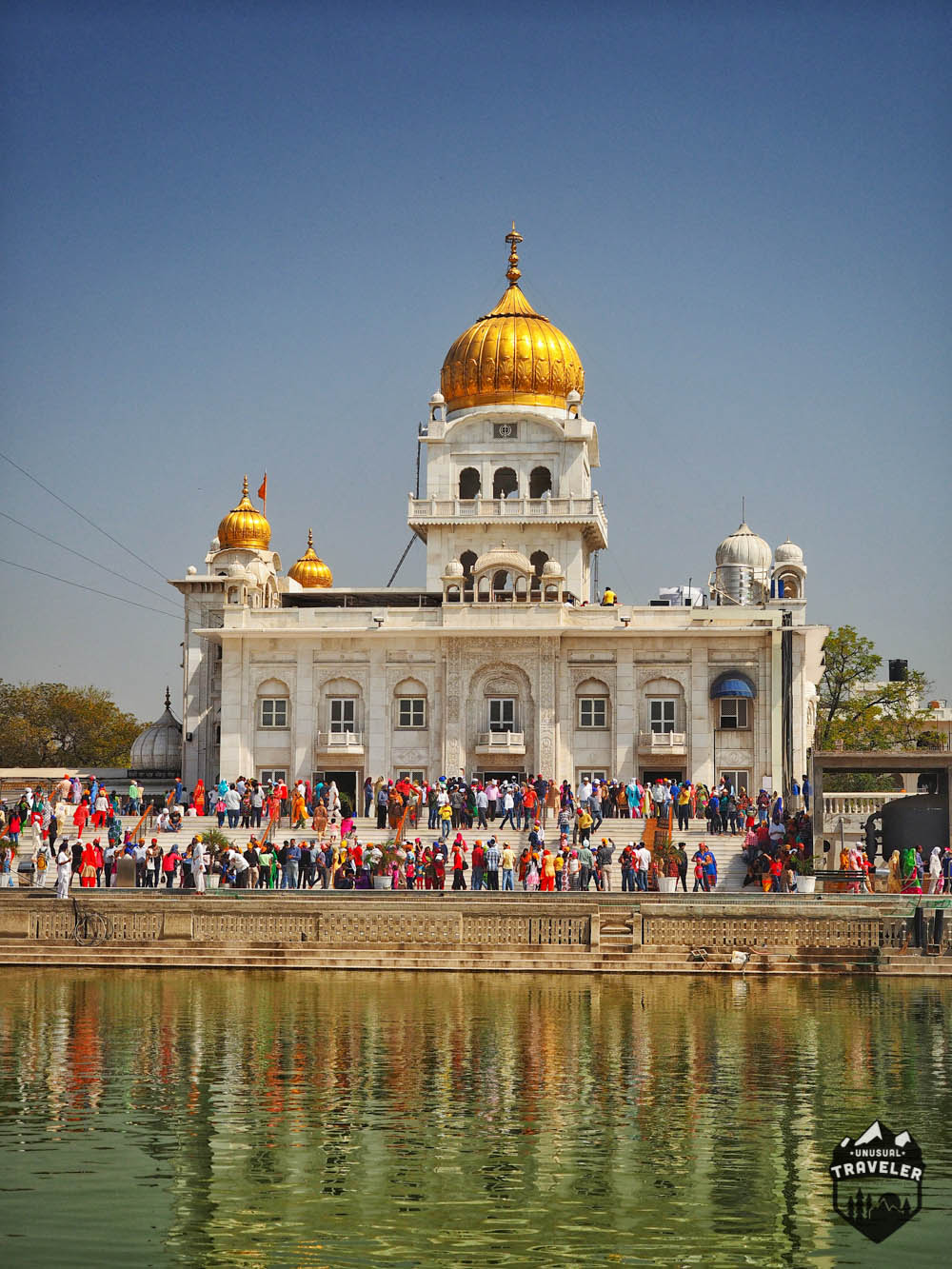 Gurudwara Bangla Sahib is one of the most important Sikh temples and its known for its association with the eighth Sikh Guru.
It´s currently nr one on TripAdvisor of things to see in New Delhi. 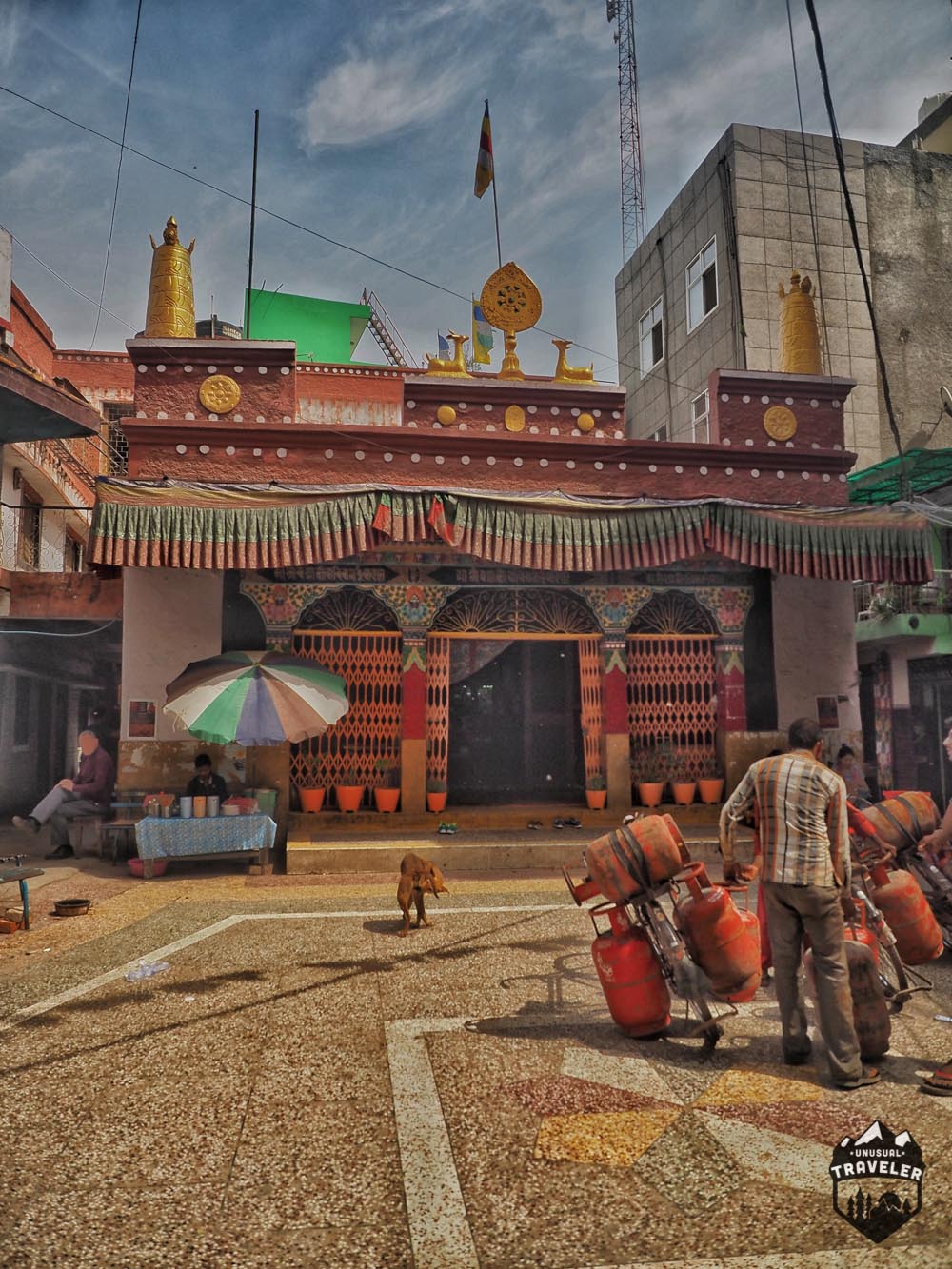 Manja Ka Tilla is the biggest? Tibetan refugee district in New Delhi. Over the year has Manju Ka Tilla become a small tourist hub for foreigners that don’t want to stay in the busy and loud area of Paharganj.
Except for the Tibetan Monastery, so is it nothing else to see, but there numerous shops selling Tibetan souvenirs, Restaurants selling authentic Tibetan food. 3 of my personal favourite coffee houses (Ringo being the best with proper black coffee to 70Rs) is located in Manju Ka Tilla.

New Delhi, is not only Indias largest city and capital is also the world’s 4th largest city’s when it comes to population.