Big and boisterous Bangkok is Thailand’s city that never sleeps. From the snaking Chao Phraya River to the buzzing bazaars of Yaowarat to the soaring skyscrapers of stylish Sukhumvit, there’s such palpable energy to the sprawling megalopolis that most travellers will need a back-soothing massage by the time they’re done. 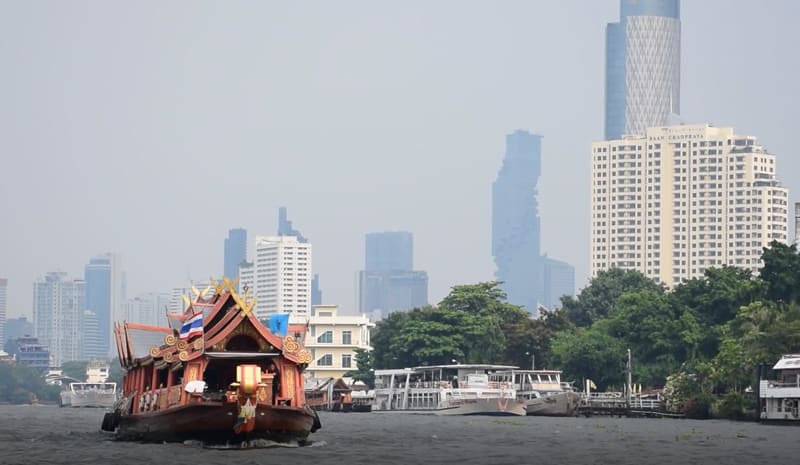 Travelling down Chao Phraya River the lifeline of Bangkok. With the tallest building in Thailand in the background, the 317m tall King Power MahaNakhon tower.

Bucket-list experiences come thick and fast in the BKK. One moment you’ll be glugging beers between the steaming noodle stalls of Khaosan Road; the next gazing at glimmering Buddha statues in the Grand Palace.
Shopping through Chatuchak’s curious emporiums might take the morning; clinking cocktails by poolside on the 43rd floor comes in the eve.
You never really know what to expect. 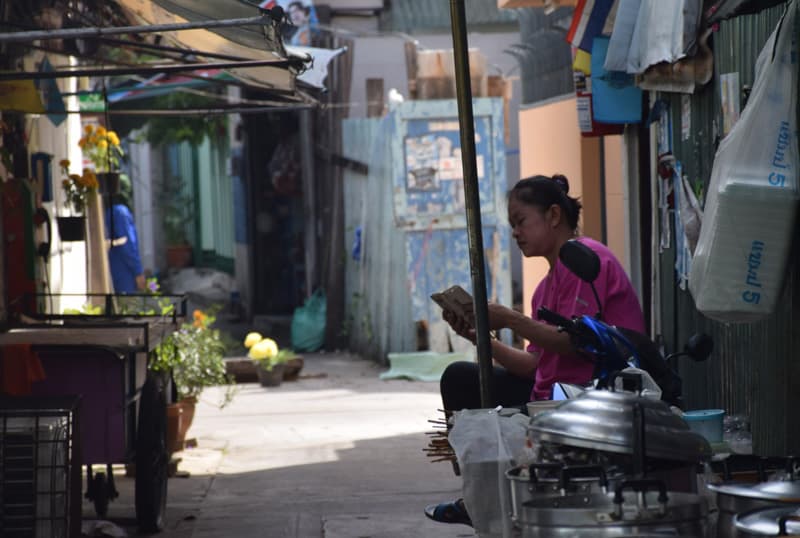 Where exactly is Bangkok?

Bangkok is the heart of Thailand – both figuratively and literally. Located on the central coast of the Gulf of Thailand, it looks southwards to the famous islands of Samui and Pha Ngan, but north to the rice fields and historical relics of Ayutthaya. The snaking Chao Phraya River wiggles right through the middle of the capital, bisecting it in two on a roughly north-south axis.

Top Things to do in Bangkok.

There’s hardly a dull moment to be had in Bangkok. Between peanut-sprinkled pad Thai noodles and meditative moments in mystical Buddhist shrines, you’ll find it’s easy to pack any itinerary full to bursting. 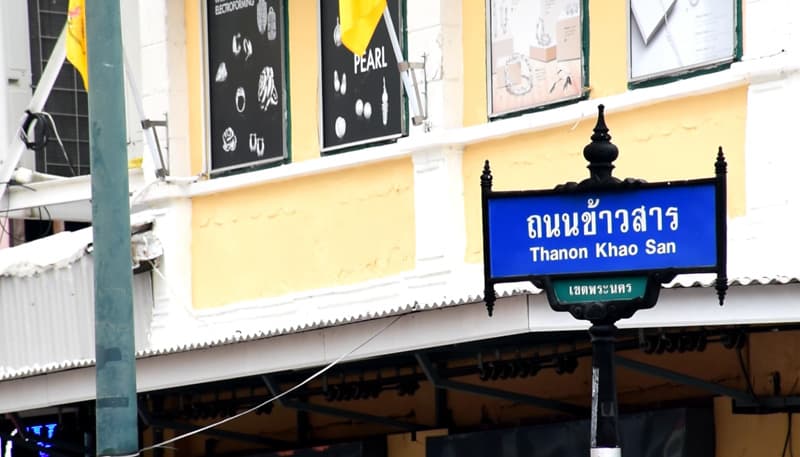 Drink a beer on Khaosan Road.

Khaosan Road is the first port of call for any backpacker hitting Thailand. Many a young’un has cut their teeth in this party mecca, which rose to fame thanks to its cameo in the Leo DiCaprio flick The Beach.

The revelry continues to this day. There are clubs, pubs, eateries, and sizzling street stalls to hop between. Things go into overdrive when darkness comes, with uber-attractive happy hours that see Chang beers cut to just 60-80 THB (around $2).
You’ll also find massage parlours, suit tailors, street markets – it’s a real overload for the senses that’s not to be missed! 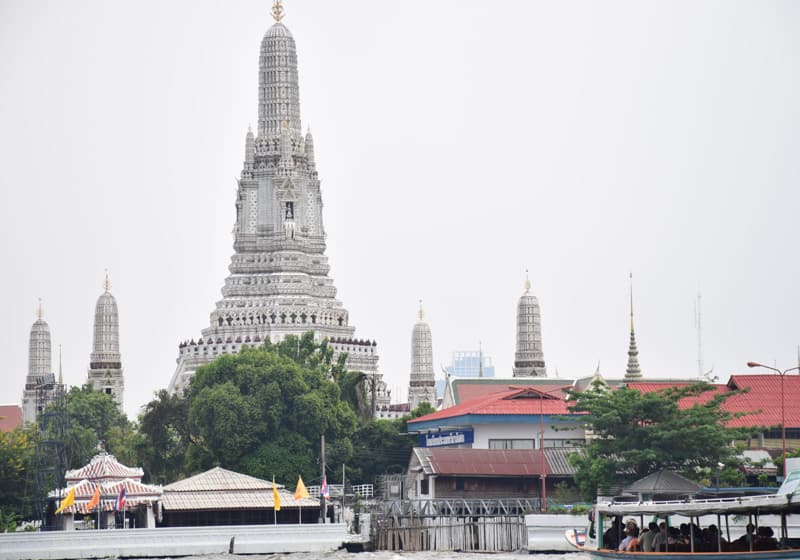 The Chao Phraya River is the waterway that links all of Bangkok from head to toe. It wiggles like a grass snake through the metropolis, hosting the famous water taxis. You can grab a ticket for those for around just 30 THB ($1). It’s a great way to immerse yourself in the local crowd, aboard long-tail boats that are crammed with saffron-robed monks and Thai students alike.
Travelling by water is also a great way to glimpse some of Bangkok’s major landmarks, from the hulking Khmer stupa of Wat Arun to the gold-tipped spires of the Grand Palace. 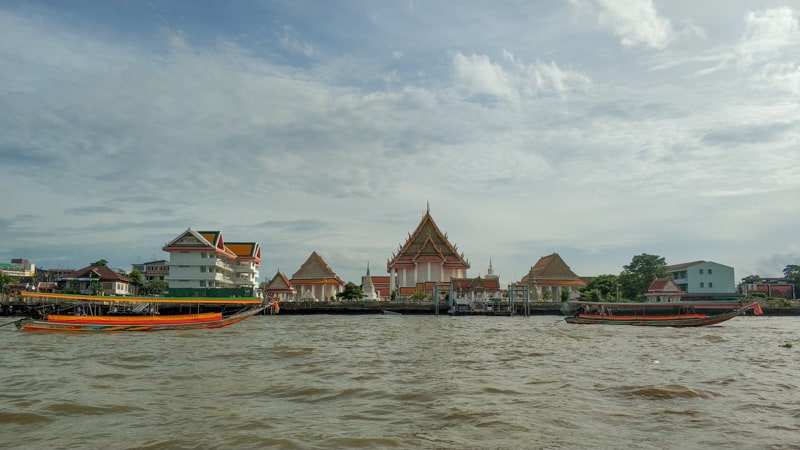 Shop in the Chatuchak Weekend Market.

The Chatuchak Weekend Market beckons visitors with its menagerie of stalls and shops and eateries every Friday to Saturday. It takes place on the northern edge of the capital, in the district of Chatuchak itself.

Reigning as the largest market in all of Thailand, there’s virtually nothing you won’t find. From glazed pots to knock-off designer wear to blooming bougainvillaea plants, it’s sure to be up for grabs in these parts.

Looking for something special to do in Bangkok? what about visiting the Airplane Graveyard in the middle of Bangkok.

To delve into the walking streets of Yaowarat is to discover a real hodgepodge of energy and action. The smells of incense and five-spice tumble out from madcap shops owned by stooping old men.

There are fishmongers with shark fins and crates of mussels and more. There are veg sellers hidden behind stacks of aubergines and courgettes and pak choi. Yaowarat is the traditional Chinatown of Bangkok, though its streets are a real melting pot of people and cultures, with Korean cafés converging on bumping beer halls. During the evening is when it’s at its craziest.

Catch the water ferry across from Banglamphu district to Wang Lang, and you’ll instantly be taken by the maze of shouting hawkers and steamy food courts. Because this remains an indelibly local market, it’s an excellent place to sample Thai street food. 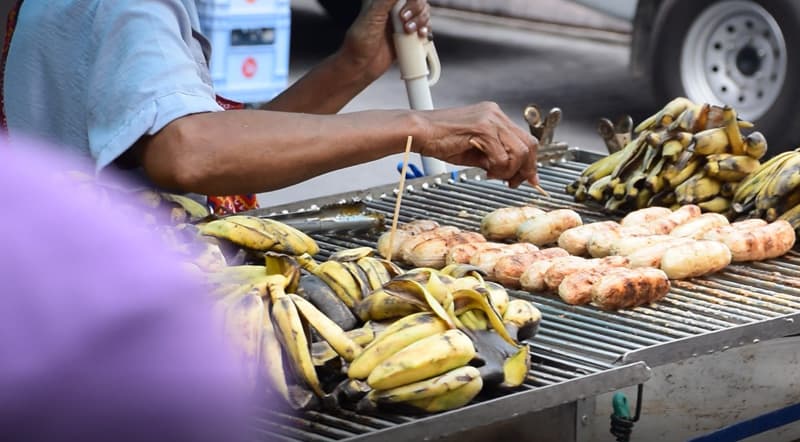 Too many surprises do Thailand have some of the stickiest and strangest beer brewing laws in the world, while you might not notice it quickly, but Thai laws prohibit people from brewing and distributing their own beer.
Many bars sell foreign craft beers, but due to high import taxes, don’t expect these to be cheap. 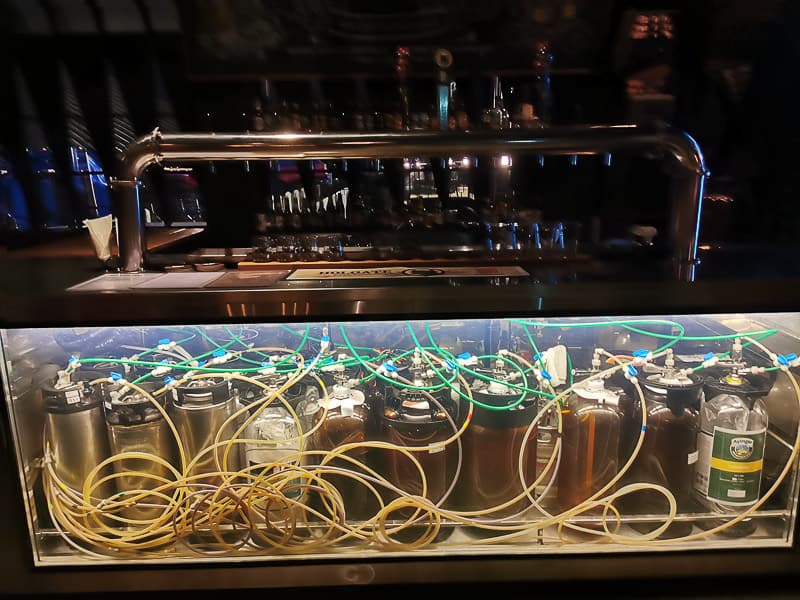 And crazy enough some of the “Thailand Craft Beer” are these days made as far away as in Australia, Taiwan, Japan and South Korea.
Even the oldest Thai Craft beer “Phuket” is produced in Cambodia, but they are all labelled as Craft beer from Thailand, but then read the small writing on the bottles, and you will see where it´s really brewed.

But even with these strange rules are Bangkok´s craft beer scene rapidly growing, click here to read a guide for 11 places to go for craft beer in Bangkok. 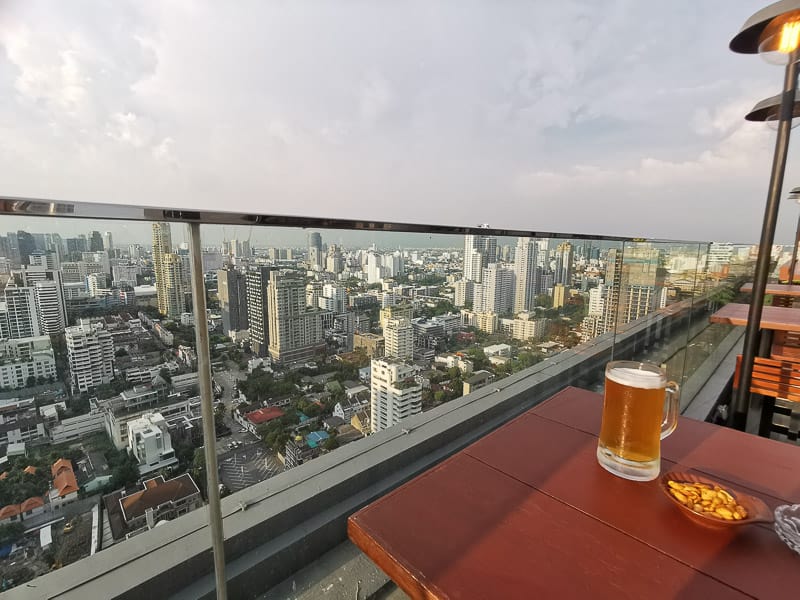 A great view with my beer at Brewski Bangkok.

Enjoy a panoramic view of Bangkok from one of the tallest buildings in the city.

Bangkok has it´s a fair share of tall buildings with rooftops terraces and restaurants, with the world-famous (and expensive) The Dome at Lebua, where they filmed a scene for the Hangover 2 movie is by far the most popular place to enjoy a view over Bangkok.

But nearly 20 years was Baiyoke Tower II, the tallest building in Bangkok and the best place to enjoy a panoramic view of the city.

Wonder at the Grand Palace. 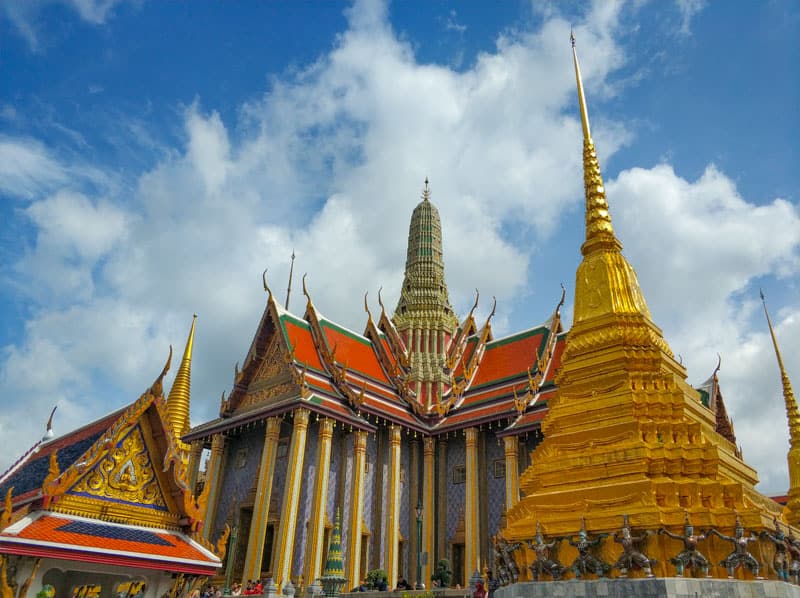 The home of the Thai royal family and the most revered temple in the country is a must for any culture buffs or history lovers. You certainly can’t miss it – it sits in a large walled complex smack bang in the heart of the capital. Inside, you’ll be able to see gold-trimmed temples and courtrooms. The highlight is surely the opulent Wat Phra Kaew, which holds the sacred Emerald Buddha relic. 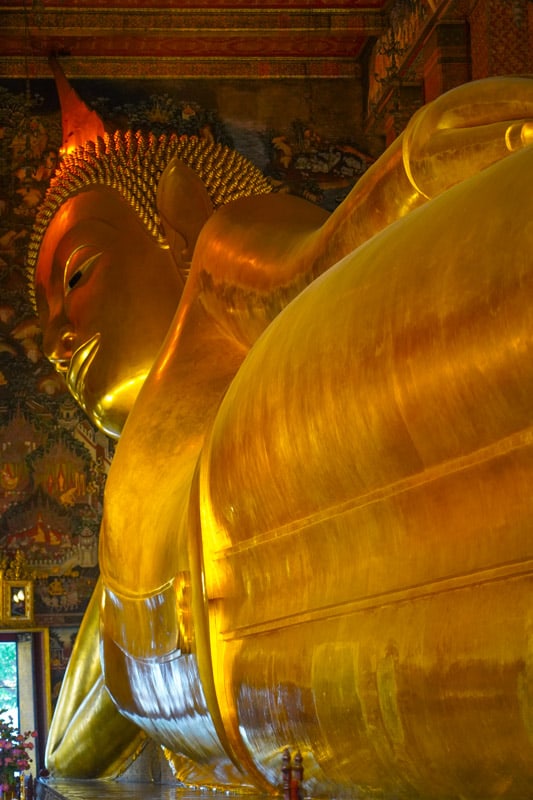 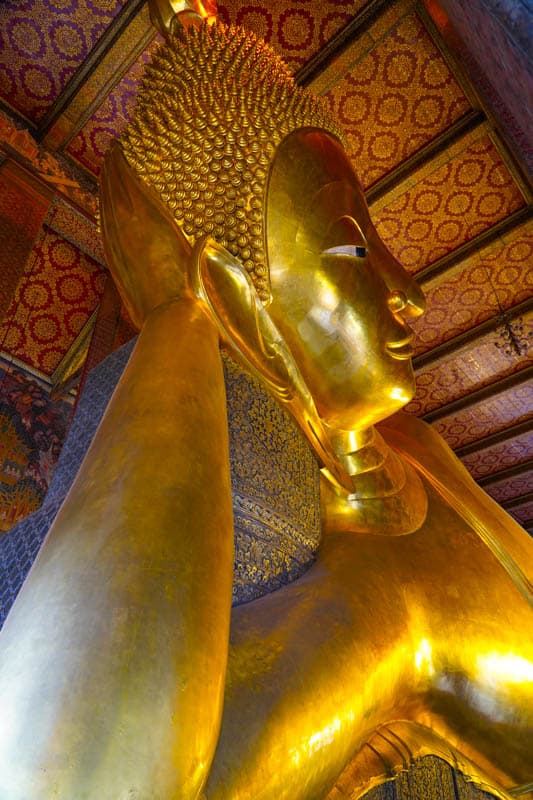 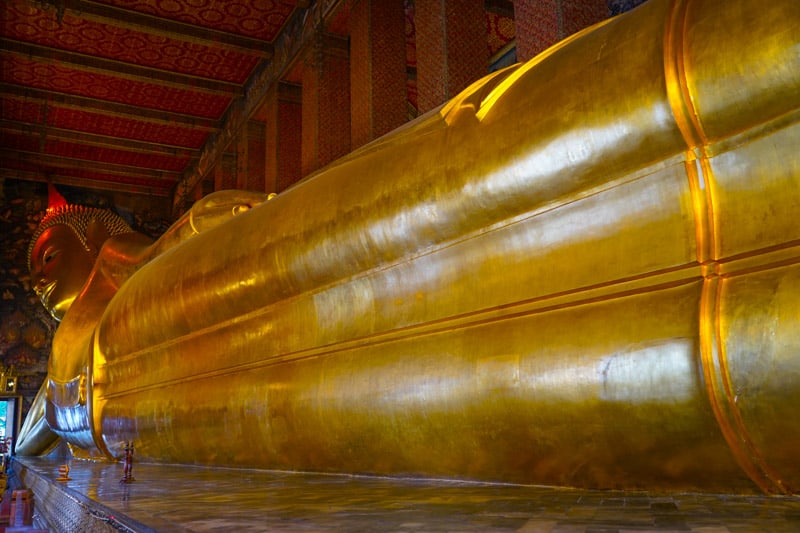 Wat Saket, also known as the Golden Mount, is one of the most recognisable temples in all of Bangkok. Like a colossal metallic peak, it rises high above downtown Bangkok. It dates all the way back to the Ayutthaya era (the 1300s-1700s) but remains a sacred place to meditate and pray.

It’s also perfect if you’re keen to escape the crowds of the city.
Leafy parks filled with ferns and fruit trees surround the mount, and the stupa on the top has lookouts with sweeping views going north, south, east, and west. 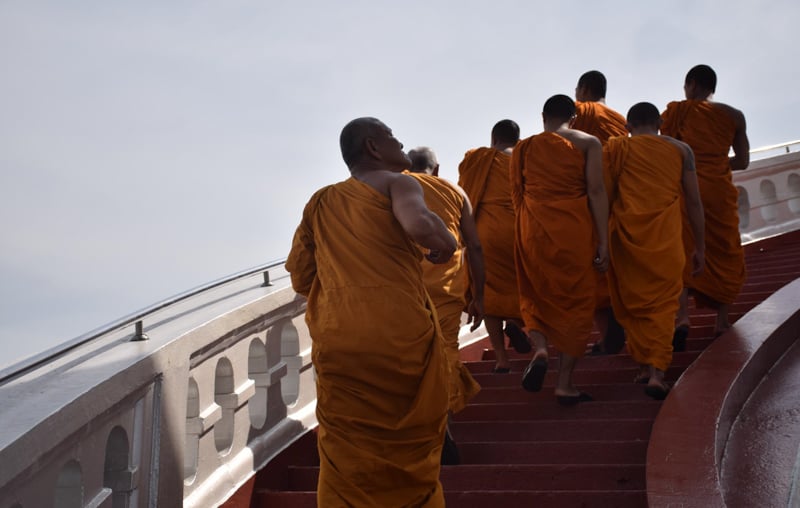 Best place to stay in Bangkok.

Bangkok might just have the most eclectic range of hotels in all of Southeast Asia. From heritage-rich colonial homes with cute interiors to slick design hotels for the jet setters, there’s something to suit every traveller…and every budget.*
Looking for a proper accommodation guide for Bangkok?

But for most first time visitors to Bangkok is Koh San Road usually the best place to stay, while the more experienced Thailand traveller usually stay far away from that area.

The Yard Hostel Bangkok ($)
The very definition of a poshtel (a posh hostel), the Yard really pushes the boundaries of what it means to offer budget accommodation. Smooth concrete walls converge on leafy gardens shaded by banana trees. There are decking areas to chill on. The interiors ooze industrial-chic charm and minimalism. What’s more, the whole place is eco-centric, made from as much recycled material as possible.

Villa Mungkala ($$)
This timber-built home oozes traditional colonial style between the ramshackle neighbourhoods of the Bangkok canals. Its lobby is a mind-boggling menagerie of portraits, antiques, and trinkets collected during the owner’s own travels throughout the world. The rooms are cosy and small but put you right on the edge of the lively districts of Khaosan and Banglamphu.

SO/ Bangkok ($$$)
Luxury comes in a five-star format at this uber-chic hotel. Channelling the cutting-edge energy of the city, it opens onto sleek rooftop cocktail bars that overlook the forest of skyscrapers in the Silom district. Rooms have floor-to-ceiling windows with stunning panoramas, private bathtubs, and access to an infinity pool.
Of course, Bangkok is changing and renewing all the time.

How to get to Bangkok.

There are oodles of ways to arrive in Bangkok.
Those already in the Land of Smiles can enjoy a ride on the Thai railway that runs in from the north. The most popular connection from Chiang Mai links the capital to the country’s second city on a comfortable overnighter. You’ll need to purchase tickets in advance, particularly in the high season.
There are also so-called VIP buses (which are hardly VIP at all!). They can bring you to BKK from most major tourist towns across the country.

Being Bangkok, the metropolis is also a hub for air traffic. Smaller Don Mueang Airport handles most domestic flights and all international flights by AirAsia and most other budgets airlines. They make for easy links to islands like Koh Samui, the beaches of Krabi, and also towns up north. You’ve also got stacks of Southeast Asian short-haul flights arriving there, making it a cinch to come in from Bali, Cambodia, Vietnam – the list goes on.

If you’re arriving from further afield, then there’s great news: Bangkok’s Suvarnabhumi Airport (BKK) is one of the largest in the whole world.
It’s served by flag carriers and low-cost, long-haul providers alike, with connections that originate in Europe, Australia, North America, the Middle East, and beyond.

From the terminals, the modern BTS Skytrain can whisk you to the edges of Phaya Thai district on the outskirts of the downtown in less than an hour (and for just 45 THB), or you can take AE2 Or S1 busses directly to Koh San Road for 60THB.

If you think we’ve missed something, or if you have something to add to this ultimate guide, we’d love to hear your thoughts in the comments below. 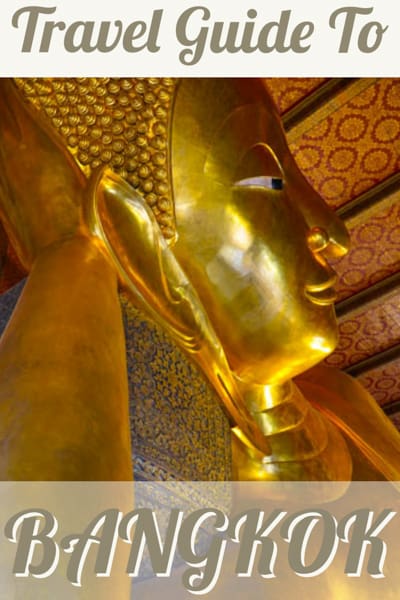 Big and boisterous Bangkok is Thailand’s city that never sleeps. From the snaking Chao Phraya River to the buzzing bazaars of Yaowarat to the soaring skyscrapers of stylish Sukhumvit