An introduction to Hiriketiya in Sri Lanka. 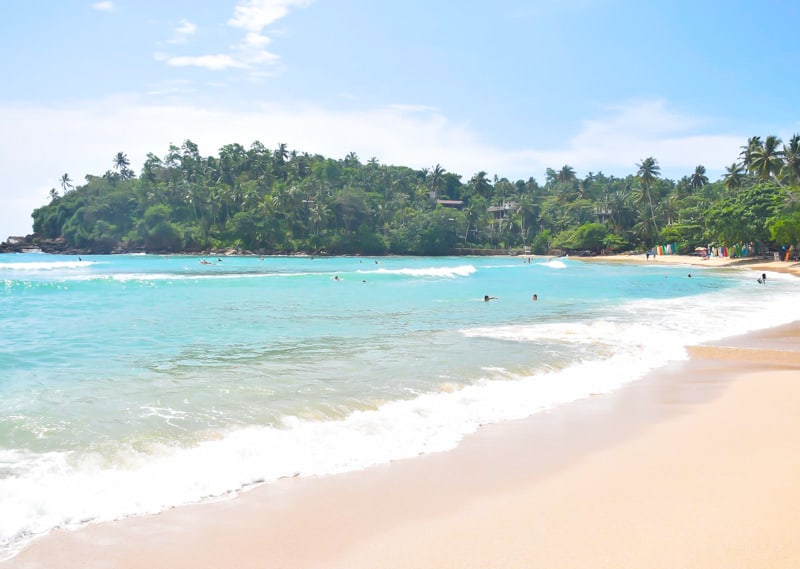 There are some great beaches in Hiriketiya without too many tourists.

Blink, and you’ll miss Hiriketiya Bay, especially if you’re whizzing past on a rattling Sri Lankan tuk-tuk! This small horseshoe beach is tucked away from sight, only a stone’s throw from the bustle of Dickwella Town but concealed by groves of lanky coconut palms and sea grapes.

Chilled doesn’t quite do it justice. The pace of life slows the instant you hit the muddy tracks that link the surf cottages to the sands. Hammock time is all but guaranteed. And so are long sessions on one of the island’s most upcoming wave breaks.

In essence, Hiriketiya is a fledgeling beach town with stacks of tropical charm. It’s dotted with cafés touting poke bowls and iced coffees, but also infused with a touch of traditional Sri Lankan character – look to the roti stands and samosa outlets for that. You can come with your surfboard in tow or just a towel and the sun cream. 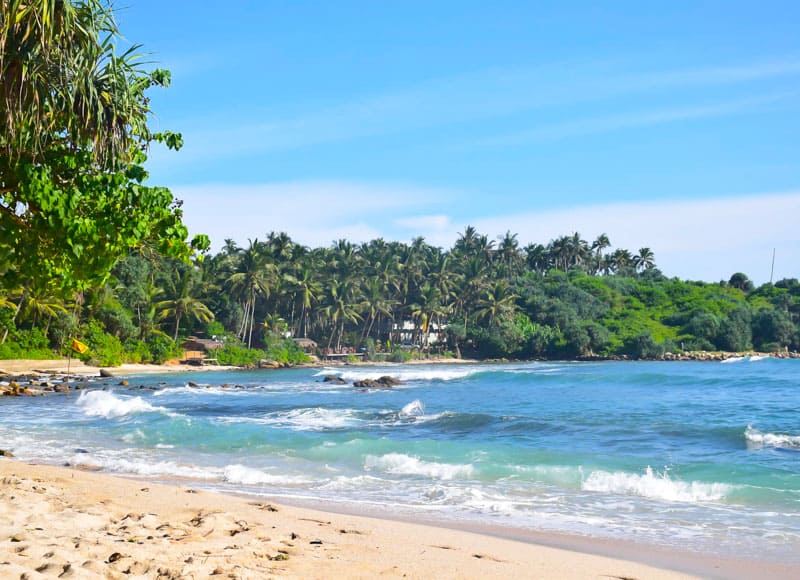 There are some great beaches in Hiriketiya without too many tourists.

Hiriketiya is on the extreme southern edge of Sri Lanka. It gazes out to the vastness of the Indian Ocean between two headlands that are covered in rocks and palm trees. To the west is the town of Dickwella – one of the largest hubs before you enter the remoter lands of the Tangalle shore. To the north, you’ll soon find the rising Central Highlands and the tea fields that go with them.

How to get to Hiriketiya.

Getting to Hiriketiya is easier than it’s ever been. That’s largely thanks to the soaring popularity of the place as a surf destination. Perhaps the most fun way to arrive is by local bus. They cost next to nothing (think around just 250 LKR for a couple of hours’ ride) and link the station in Dickwella to regional cities like Galle, Tangalle, and even Colombo. A new route also goes all the way from Dickwella to the backpacker mountain town of Ella, making for a convenient connection between the highlands and the coast.

Loads of travellers will prefer to organise private transfers. They are ubiquitous in Sri Lanka and offer perhaps the most reliable and convenient way to get from the airport in Colombo to Hiriketiya. Expect to pay in the region of 12,000-15,000 LKR for a direct drive from terminal to the beach. You can reach out to lift-sharing groups on Facebook to cut the cost.

Travelling by train is another fun way to get to Hiriketiya via the major resorts along the south coast. Unfortunately, the departures from Colombo Fort will only take you as far as Weligama. From there, it’s possible to change to a tuk-tuk, which should cost around 2,000 LKR straight to the door of your accommodation. Update the train now goes all the way from Colombo

Being on the south-west coast of Sri Lanka, Hiriketiya is at its best when the south-west monsoon finishes. That’s usually around October, but it’s possible to have some rains creep into early December. The dry weather typically lasts all the way until April so that you can catch great beach days right throughout the European and North American winter months in these parts.

What to do in Hiriketiya. 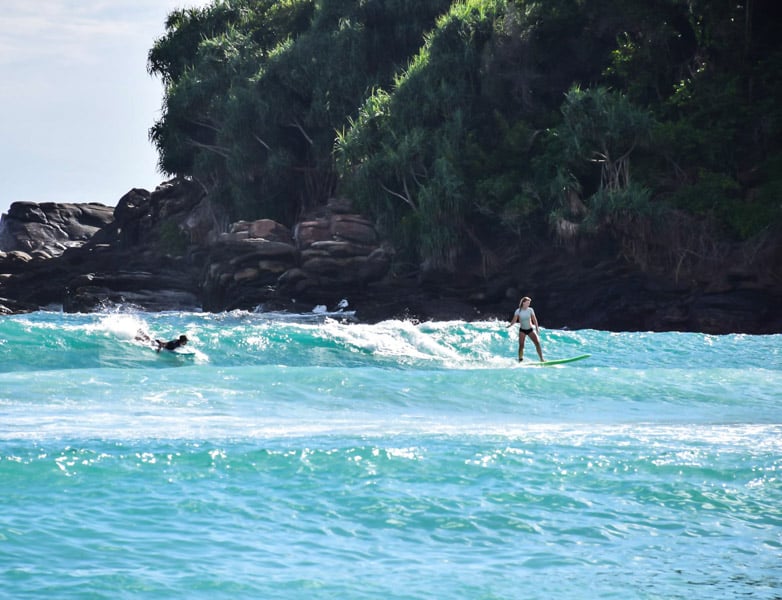 Surfing is the main thing to do in Hiriketiya

Hiri – as it’s affectionately known – is the sort of place that’ll have you reaching for the sunscreen and sunnies. Life is all good vibes and easy-going on this corner of the Sri Lankan shore, but there are also some fun-filled and exciting things to get stuck into.

If there’s one reason so many people are flocking to Hiriketiya these days, it’s for the surf! Yep, this is among the newly discovered spots on the Sri Lankan south coast. It’s beloved for the variety of its waves.

Two separate breaks roll straight into the bay. There’s a pretty challenging reef (typical of Sri Lanka) that breaks over shallow rocks infested with urchins. That’s best left to the seasoned surfers. Novices can enjoy the Hiri beach wave. It’s easy-going and mellow, with a ride that can go for as much as 100 meters across a sandy bottom.

There are loads of rental stalls on the beachfront of Hiriketiya itself. You can expect to pay around 500 LKR/hour for a surf board. For surf gear, wax, and information on the local spots and swells, head to Left4Days – it’s the only real surf shop in town!

Laze on the beach. 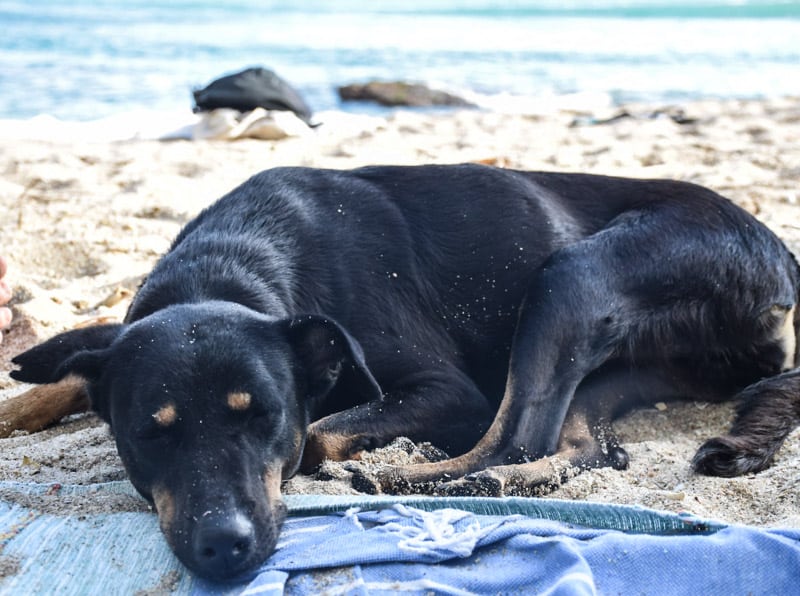 Hiriketiya isn’t just for surfers. The beach itself is a stunning scythe of yellow-tinged sand that’s got plenty of shaded places under pines and palms for those who simply want to laze their days away. The western end of the beach is less rocky but lined with cafés and bars. It’s great if you like settling with a cold Lion beer and watching the surfers.

The eastern end of the beach is a half reef, half powder, but you do get the lovely café-restaurant of Peter’s Place for cheap eats right where the waves roll in. 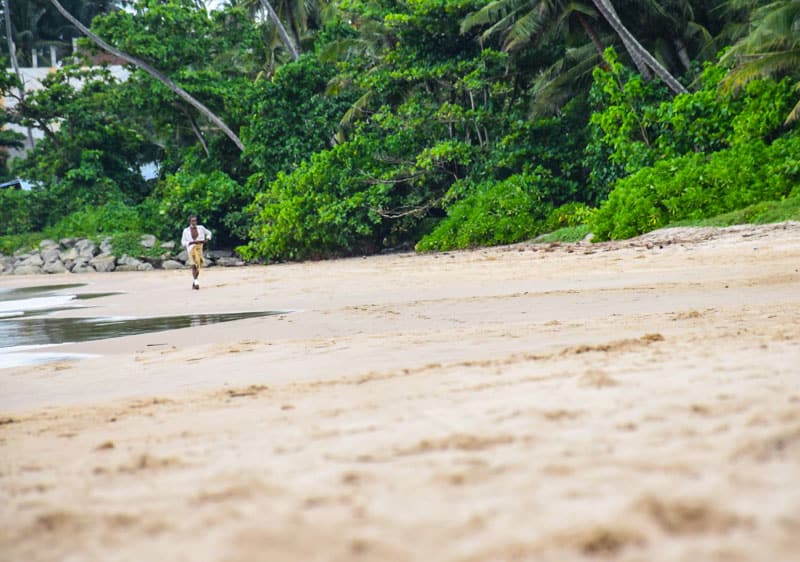 There are untouristy beaches everywhere.

Dickwella is a bustling transport interchange and town that’s a mere 10 minutes’ drive by tuk-tuk from the beach at Hiriketiya. It’s a great place to visit if you want to feel the buzz and energy of a lived-in Sri Lankan city. Samosa sellers abut veg stalls on the street corners. Buses hurtle down the main drag as tuk-tuks weave this way and that. And there are some super-tasty (and uber-cheap) curry buffet places to enjoy. They’ve got dals, okra stews, and multiple types of rice for just 250 LKR a pop!

Go on safari in the Yala National Park.

One of the great things about choosing to venture this far south around the bottom of Sri Lanka is just how close you’ll get to the world-famous Yala National Park. Packed with cheetahs and elephants, it’s arguably the most popular place to go on safari on the island.

Organised tours can be run from Dickwella or through providers in Hiriketiya itself, starting early and spending a whole day in the reserve. Other wildlife that’s viewable include crocodiles, countless tropical birds, and Sri Lankan bears.
A lesser know national park in Sri Lanka well worth a visit is Udawalawe National Park. 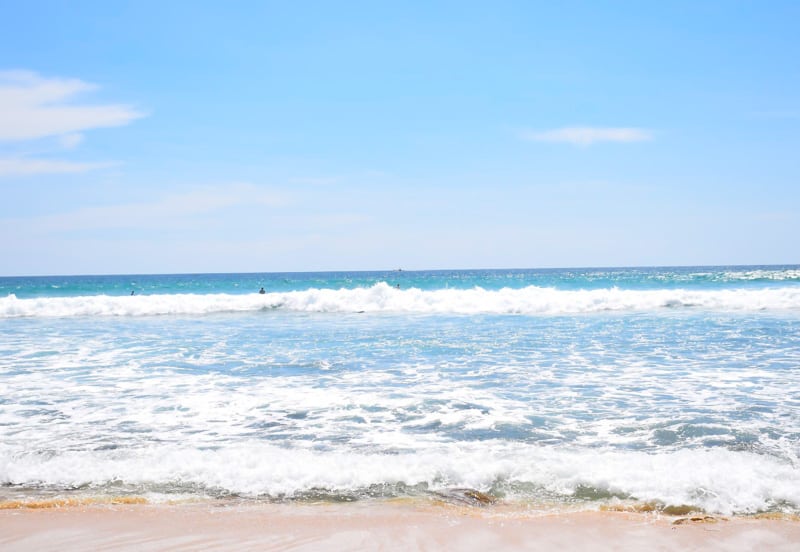 There are untouristy beaches everywhere.

Explore the beaches of Tangalle and beyond.

Hiriketiya Bay is a gorgeous beach, but for real seclusion and Robinson Crusoe vibes, you might want to head to the east. There, the coves of Tangalle are usually far emptier. Even closer are the shimmering sand and azure seas of Kudawella. A short tuk-tuk or even a hike around the headland can transport you over. Keep your eyes peeled for the blowhole that’s on the nearby headland – it’s the only one of its kind in Sri Lanka.

Where to stay in Hiriketiya.

From timber-built shacks to stylish surf and yoga camps, there are now all sorts of places to bed down in Hiriketiya Bay…

Dots Bay House is one of the original surf camp come surf bars of Hiriketiya. It’s been here since the first wave riders discovered the breaks, and it still buzzes with life on the weekends (head in to find regular live music in the outdoor bar). The atmosphere is chilled, the accommodations are simple and comfy with air conditioning, and – best of all – the whole establishment is literally two steps from the beachfront.

Built-in the ilk of an Aussie hipster café with a twist of the tropics, The Grove Lanka is one of the go-to places for that ubiquitous avocado on toast in Hiri. But it also has rooms. Downright stylish and luxurious rooms. There’s only a couple available, so you’ll need to book early. Each sits on the second floor with balconies that gaze through the coconut palms and straight across to the waves.

Sea view? Check. Balconies that jut over the Indian Ocean? Check. Sumptuous suites with chic glazed concrete bathrooms and plush king beds? Check. All of those luxuries and more are on offer from this classy option right at the south-west end of Hiriketiya Bay. The whole place was brand new as of 2019, coming with lovely personal touches – a palm frond here; calming al fresco seating areas there.
If you can think of anything to add to this ultimate guide to Hiriketiya Bay, we’d sure love to hear about it in the comments below! 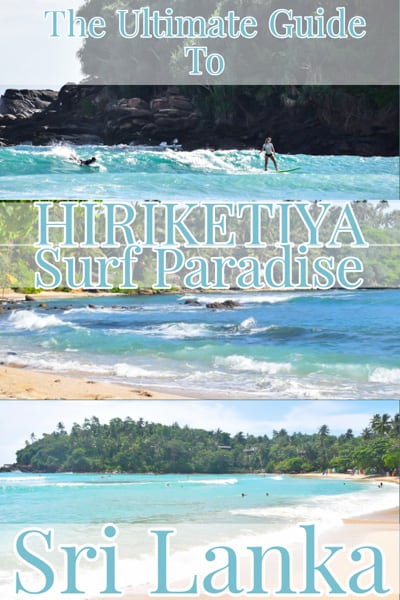 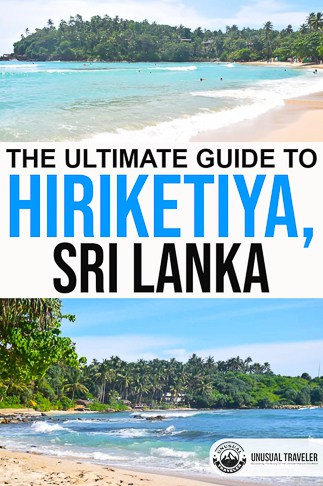