Shaped like a diamond as it runs from the craggy karst coast of Krabi into the shimmering waters of the Andaman Sea, Koh Jum is considered a true untouched Thailand paradise still not discovered by the crowds. 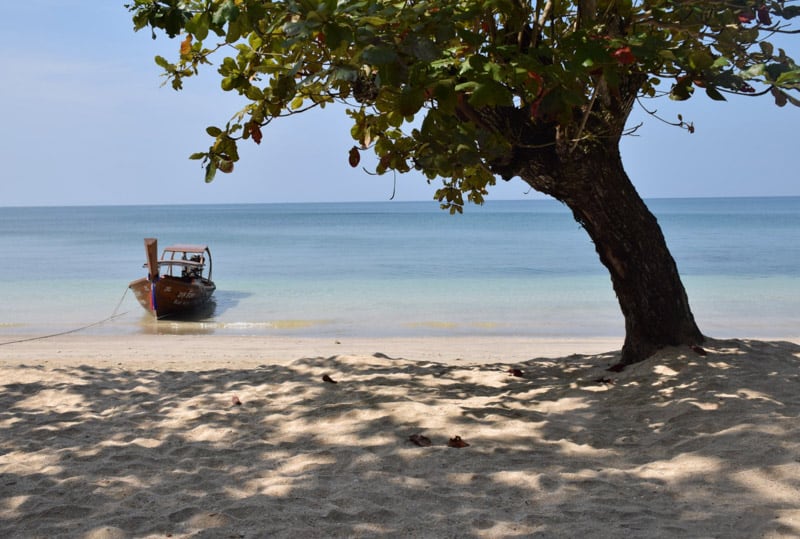 Koh Jum is still an unknown paradise in Thailand.

It’s a chilled and undeveloped glimpse at what the islands of the west coast might have looked like 15 years ago. The shores are fringed with high, drooping pines.

The beaches are strewn with coral stone and shells. The hotels are largely relaxed bungalows with gardens bursting with hummingbirds and mango trees.

Let’s be clear – not too much happens on Koh Jum. But that’s actually the point. If you’re after about of real R&R without the go-go bars and purring scooters, it’s likely that Koh Jum is the place for you.

Long mornings of sunbathing mingle with lazy afternoons of snorkelling and evenings of bumping reggae bars, all topped off with some uber-friendly people from Thailand’s Muslim minority and plenty of authentic southern food.

Where exactly is Koh Jum?

Koh Jum is one of the small fragments of land that filter south from Krabi. It clutches the western coast of Thailand, sheltered to the west by Phuket and overshadowed by the karst mountains of the Trang coastline to the east.

Top Things To Do in Koh Jum.

Throw in some loveable hotel resorts with bungalows and beach huts, reggae bars, and coral reefs, and there are loads to get stuck into.

Throwdown the towel on Long Beach. 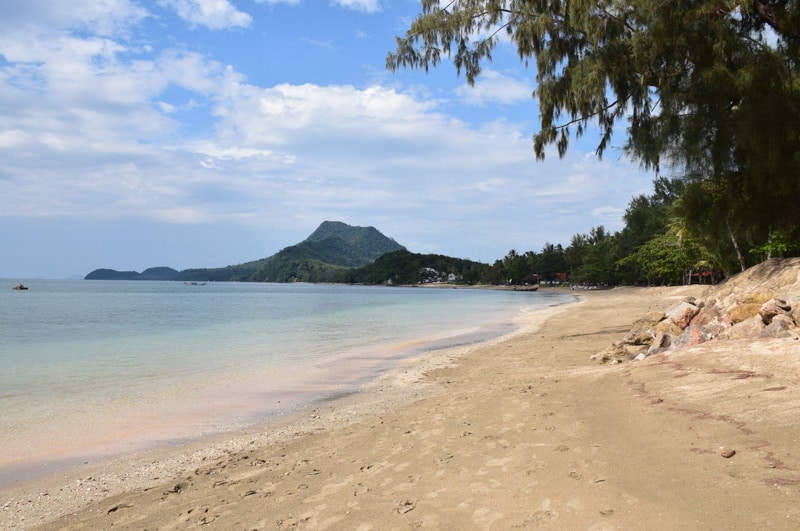 The locals call the main beach of Koh Jum Long Beach because. Well, it’s the longest beach on the island. It actually runs for more than a kilometre up the western shoreline, past clusters of waterside bungalows and the odd sunset bar.

It really hits its zenith at a point in front of the opulent Koh Jum Beach Villas resort.

There, it slopes softly down to the turquoise Andaman Sea with groups of light coral rocks peppering the ocean floor.

You should find plenty of shaded spots under the pine trees to lay the towel and chill. 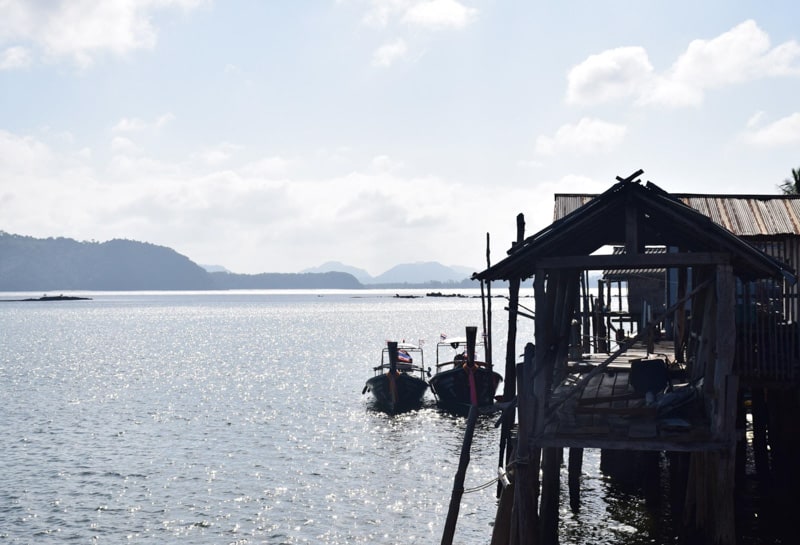 There’s only one town on the whole of Koh Jum. In fact, it’s hardly a town at all.

Just a few cafes and local cookhouses converge on the jetties of the main port at the extreme southern end of the island.

Things never get lively, except perhaps when the daily longtail boat arrives with supplies of beer, water and foodstuffs around midday.

However, it remains the busiest corner of Jum, with top restaurants like Mama Cooking and the charming Luboa Café. 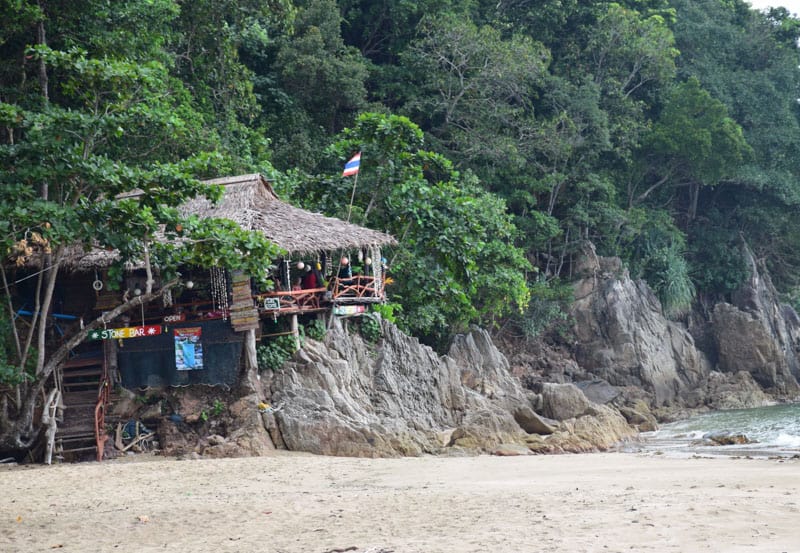 One of the coolest bars in Koh Jum, a perfect place to watch the sunset.

Have a sunset beer on Magic Beach.

As the coastline of the western half of Jum gets rockier moving northwards, you’ll find pretty little Magic Beach huddled under groves of banyans and palms.

Its position offers prime sunset viewing thanks to stunning broadside views straight across the Andaman Sea to Koh Phi Phi Don. Making the most of that is Stone Bar.

It straddles a series of boulders like a salt-washed limpet on the south side of the bay, with jutting platforms where you can sit with a cold Chang while the sun dips. 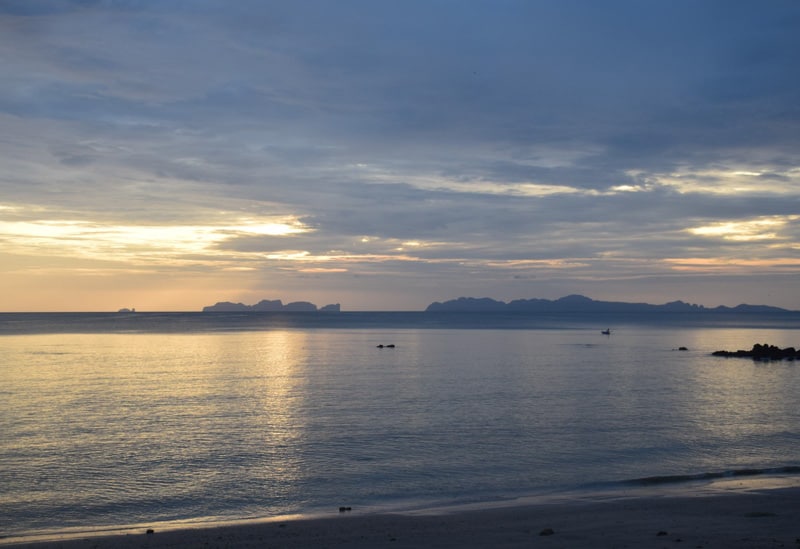 Koh Jum isn’t the smallest island in Thailand, but it’s nowhere near the largest. It’s just about the perfect size for cycling.

There won’t be any arduous days of pouring sweat under the tropical sun.

From north to south it takes only an hour or so without stops, and the whole way is – mostly – flat. You can rent bikes in the main port town or drop into the guesthouse at Friendly (expect to pay around 60 THB for the day).

The northern side of Koh Jum is known locally as Koh Pu. You can hardly miss it. Unlike the southern half of the island, Pu is topped by a monstrous mountain that arches like a giant’s back over the gleaming blue of the Andaman Sea.

For adventurous who love to hit untrodden trails, it holds the promise of a two-hour hike through the wild jungle to lookouts that survey the vast Andaman Bay and the silhouettes of the Phi Phi islands to the west.

Local guides can help reveal the route, which starts near a tsunami evacuation point on the main north-south road. 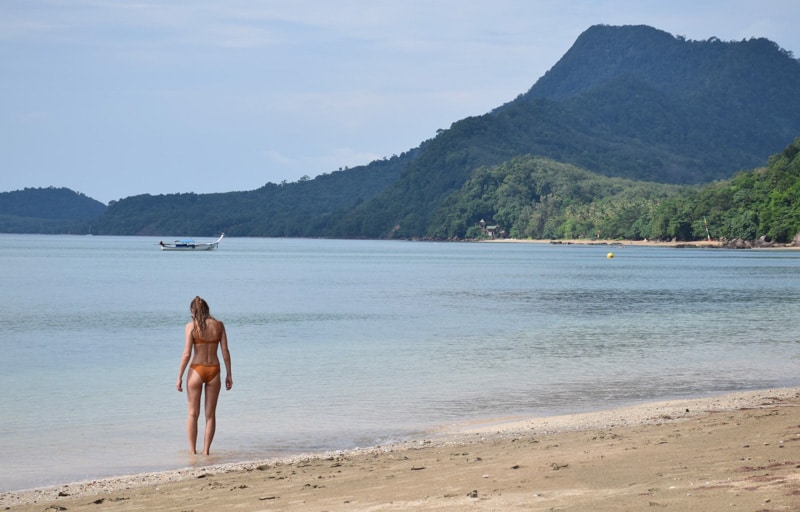 There’s a real Robinson Crusoe vibe up on Ting Rai Beach. This might be where the luxury resorts of northern Koh Pu await, but it’s also one of the lesser-visited stretches of sand on the island.

Expect golden powder lapped by green-blue waves, along with totally empty corners of the shore where you’ll be able to sunbathe in private under the shade of a banyan.

Ting Rai is also a popular snorkelling area, thanks to the tidal reefs that fill with zebrafish and whatnot when the water’s in.

There are a few great reggae-Thai bars on Koh Jum. One of the best is surely Wood Don Bar. It’s followed the rule book for building classic tropical beer spots inspired by Jamaica to the T.

There are green-yellow-red banners and pictures of the Wailers and more. You get live music most evenings, which plays out next to a crackling fire pit.

Next door, the shop can take care of all your tie-dye, handmade-bracelets, and shell-necklace needs.

How to get to Koh Jum. 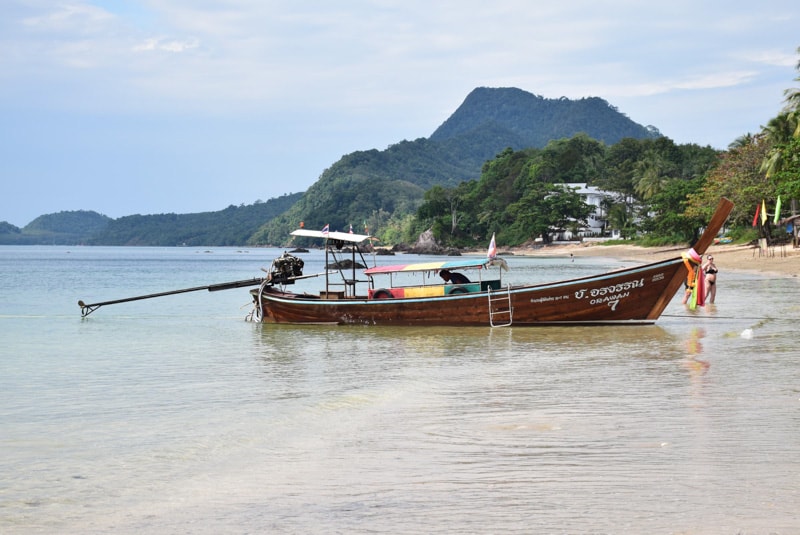 Longboat is the most common way of transport to Koh Jum.

Even the journey to Koh Jum is an enjoyable experience. This sleepy and disconnected tropical paradise is only served by a couple of boats.

You can either go for the single daily direct ferry, pay extra for a speedboat, or use the local links via the port (by far the most enjoyable option – and the slowest!).

The main passenger boat comes by the eastern coast on its way from Koh Lanta to Krabi at around 8 am. It won’t stop at Koh Jum itself but will meet longtails out at sea.

You’ll be asked to hop from deck to deck and pay around 60 THB extra for the ride straight to the beach.

The speedboat operates on a changing timetable. It can whisk you straight to Jum from popular regional holidaying spots like Phuket, Koh Phi Phi, and Krabi.

This is by far the most expensive choice, but also the quickest ticket to the beach. 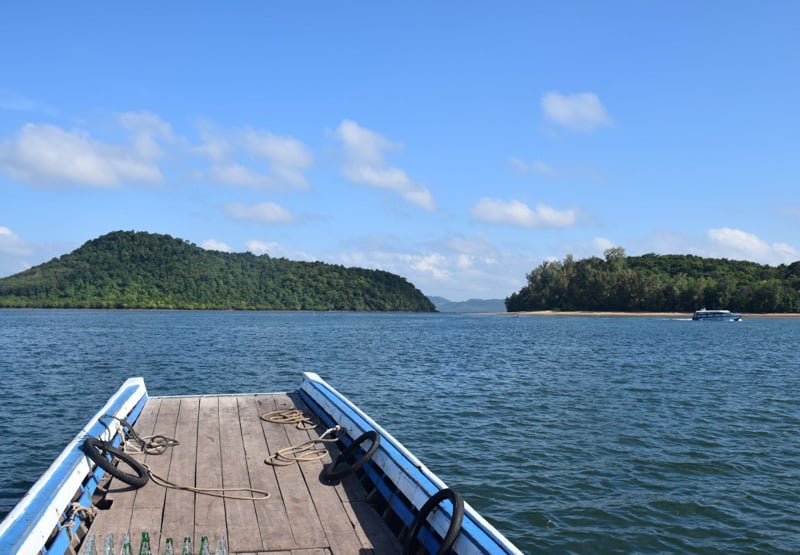 From Krabi Airport, you can catch the rumbling songthaew buses that go south to little Khlong Khanan. That’s a tiny tin-shack port town with a long jetty.

It’s got a regular longboat link to Koh Jum that the locals use. It’s also pretty much the only choice for getting to the island if you’re coming in the low season.

Where to stay in Koh Jum.

Most people will make for the popular west coast of Jum. That’s where the quintessential beach bungalows open onto views of the lapping Andaman Sea.

It’s also the most expensive corner of the island. You can save some baht for evening beers by going through the palm and pine forests inland, closer to the main road or the port.

Sat right on the main street near the bustling Friend’s eatery (good steaks and blue cheese there), Koh Jum Hostel is one of the best budget choices on the whole island.

A breezy and bright outdoor patio area opens into simple double rooms that have air conditioning and private bathrooms. There are also dorms for those on a tighter budget. The best part? The location. Pretty much every beach, village and restaurant is within striking distance.

Everyone who’s ever been to Koh Jum is likely to know of Friendly. It’s a B&B come guesthouse that sits right in the middle of the island.

The woman who runs it is known for her super-tasty masaman curries and sticky-rice desserts. But there are also on-site bungalows that ooze charm and character.
They’re built from hardwood and have protruding decks that overlook a lush garden. Watching the world go by from there is a real pleasure, with the sounds of farm animals and tropical birds echoing through the fruit trees.

A beautiful palm-thatched restaurant and bar sit just meters back from the beachfront of Koh Jum’s most popular stretch of sand. It heralds the luxurious Koh Jum Lodge.

The rooms are plush and clean, with four-poster beds draped in mosquito nets and walls clad in bamboo thatch.

A lovely pool resides under the canopy of banyan trees and waxy palms close to the breakfast area. But it’s really the proximity of the coast that make it a doozy.

You can fling open your door in the morning and be gazing at the waves lapping against the rock pools. Pure paradise.

Have you visited Koh Jum? Have you fallen in love with this unknown corner of the Andaman Coast? If you’ve got anything to add, we’d sure love to hear your thoughts in the comments below. 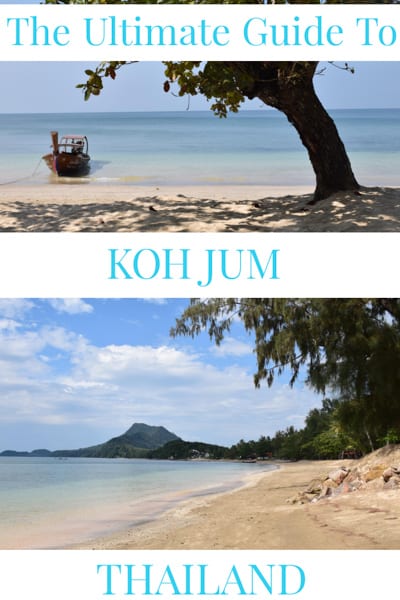 The Ultimate Guide to Koh Jum. Shaped like a diamond as it runs from the craggy karst coast of Krabi into the shimmering waters of the Andaman Sea, Koh Jum is considered a true untouched Thailand paradise still not discovered by the crowds. 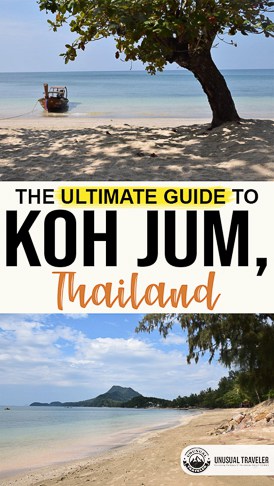 The ultimate guide to Koh Jum. Shaped like a diamond as it runs from the craggy karst coast of Krabi into the shimmering waters of the Andaman Sea, Koh Jum is considered a true untouched Thailand paradise still not discovered by the crowds.

The Ultimate Guide to Koh Lanta In Southern Thailand.
← Previous
Bukhara The Greatest City Along The Silk Road.
Next →
Click here to cancel reply.