Kyoto’s ancient traditions, beautiful architecture and festivals are renowned throughout Japan which makes it one of the most fascinating cities to visit in the country. 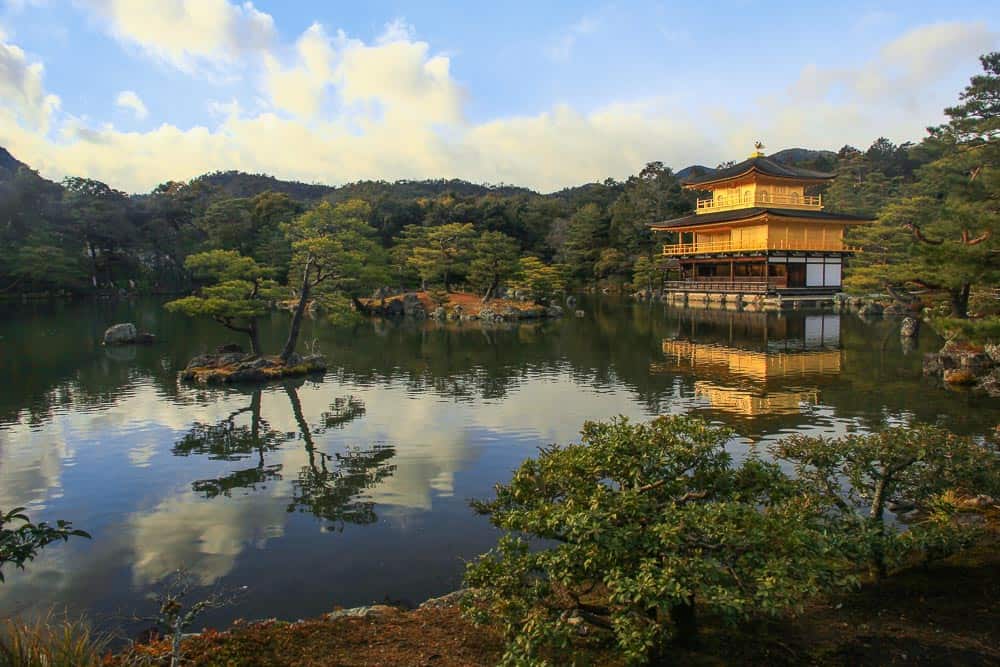 Kyoto is home to 17 world heritage sites, bamboo forests, shrines and some of the best places to see the ‘sakura’ or cherry blossoms in Japan, it’s the perfect city for international tourists to visit. 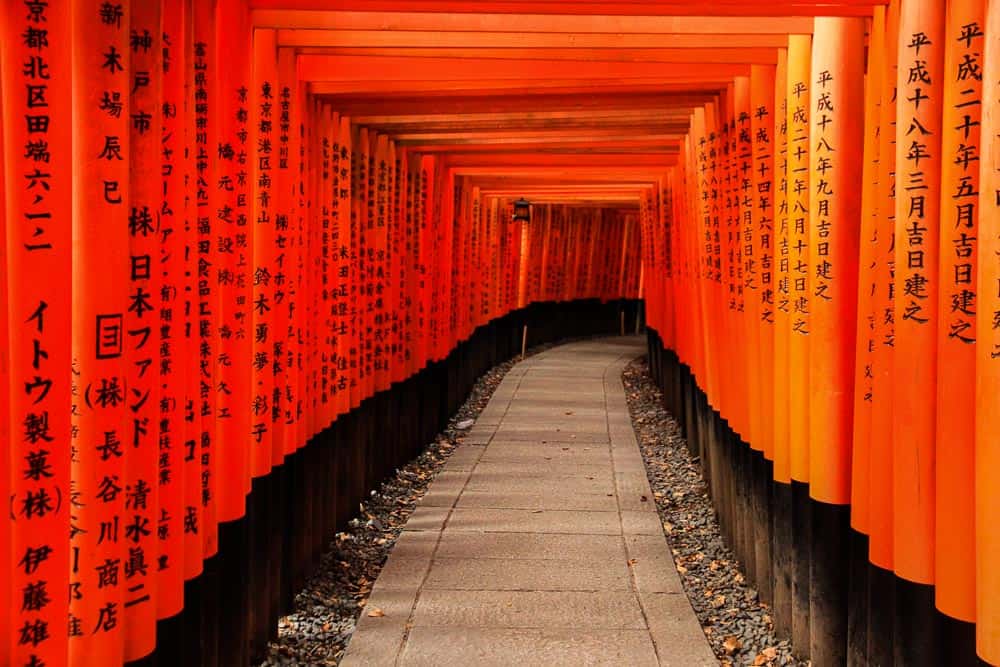 Fushimi Inari-Taisha Shrine maybe the most famous landmark in Kyoto

In Kyoto, you can spend hours wandering alongside geisha’s in Gion neighbourhood, browse museums, sample Japanese cuisine at the local market and even see the city from Kyoto Tower.

Whatever you’re seeking in a holiday, check out our travel guide/things to do in Kyoto for inspiration before you depart.

Top Things to Do in Kyoto

See the City from Kyoto Tower

Kyoto Tower dates to the mid-1960s and was built on the former site of the city’s central post office.

Designed by renowned modernist architect Makoto Tanahashi, the tower was built to withstand all of the elements including typhoons and earthquakes!

In the first year of opening over one million people ventured to the tower’s observation deck which offers some of the best 360 degree views of Kyoto’s cityscape.

Tourists and locals are split on the tower, with many believing it takes away from Kyoto’s traditional skyline.

However, the 500-person capacity, the 100-metre high observation deck is still one of the most popular attractions in the city to this day, so it can’t be too bad!

Gion is Kyoto’s famous geisha district spanning the area from the Kamo River in the west to Yasaka Shrine in the east.

The streets are packed with pretty tourist shops, fine restaurants and traditional teahouses where geishas and their apprentices entertain clients with music and dance.

Gion is known for its wooden Machiya houses which once belonged to merchants.

The houses are narrow, measuring only up to 6 metres wide yet they stretch far back from the main streets.

It’s also an area known for serving great food—Head for Hanami-koji Street with its labyrinth alleyways and charming restaurants decorated with paper lanterns. 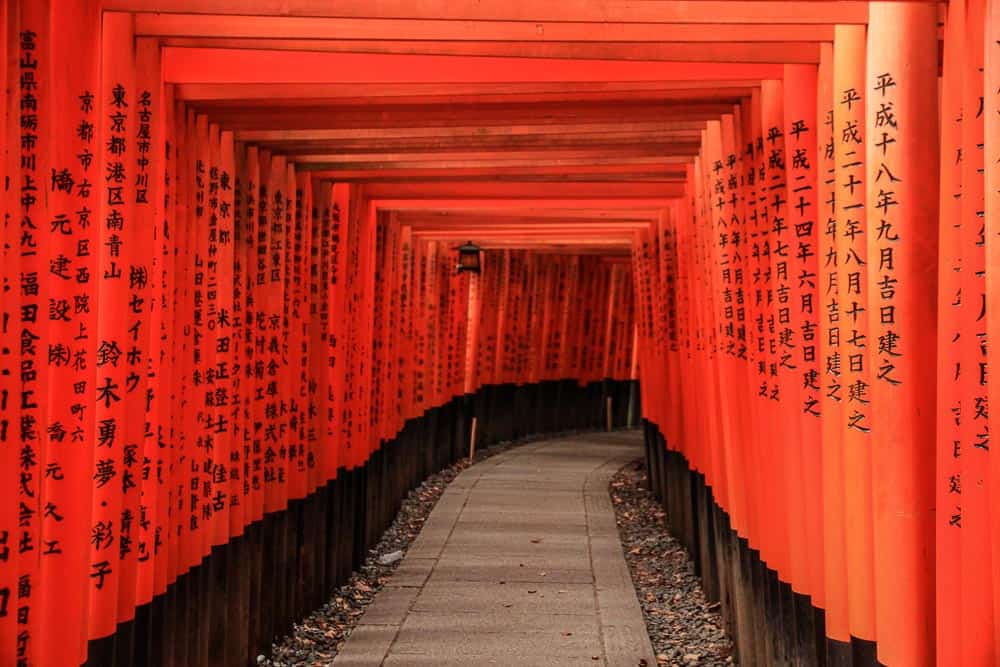 Fushimi Inari-Taisha shrine is a recognisable sight for Japanese and international visitors.

People have gathered here since 711 AD to pray for good harvests, safety and prosperity and today it’s still one of Japan’s most iconic sights.

A hike to the mountain summit through woodland takes up to 3 hours. 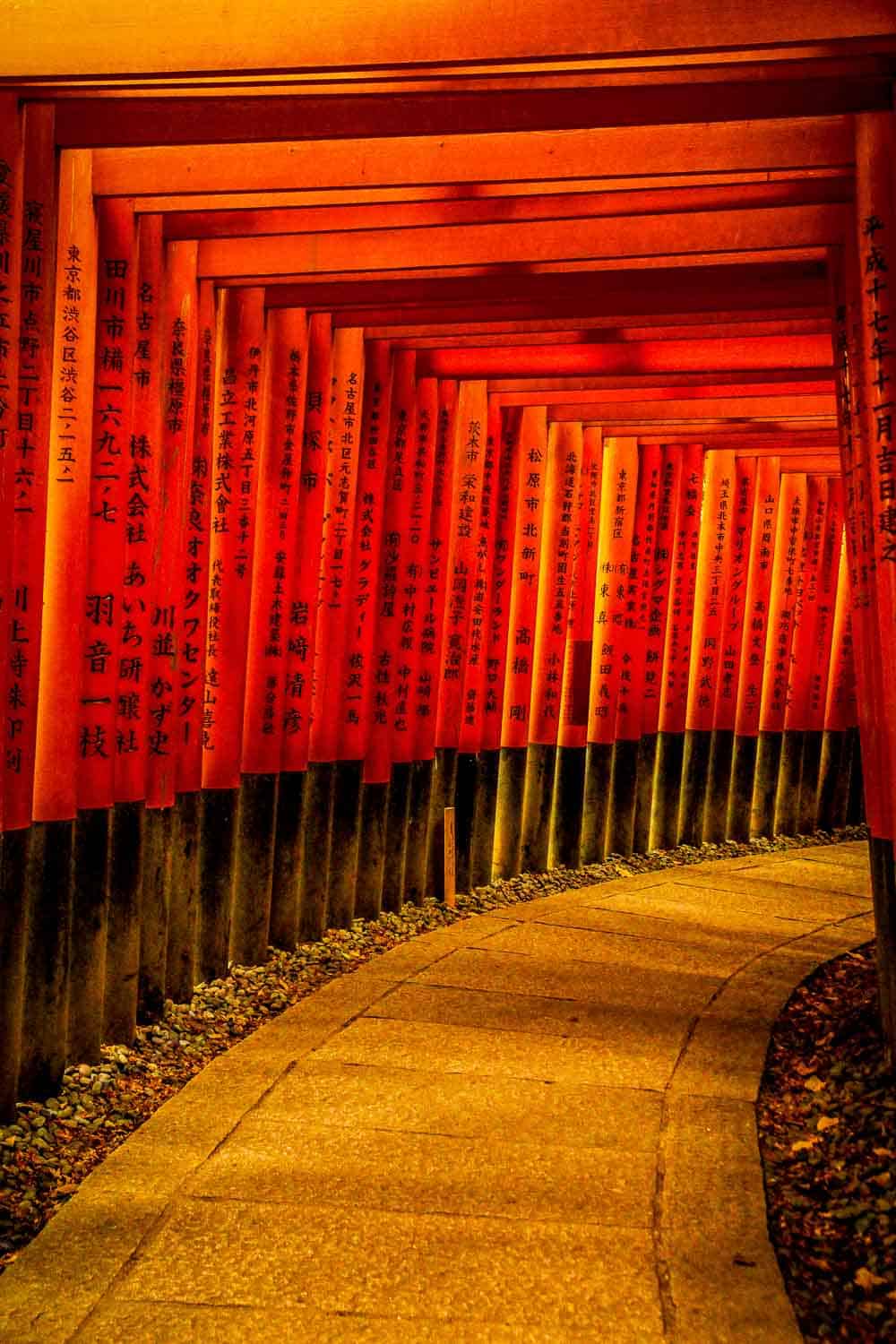 However, there are restaurants on the way serving drinks and traditional snacks such as fried tofu if you get thirsty or hungry en route.

If you don’t fancy hiking the entire way to the summit, stop at Yotsutsuji intersection half-way and enjoy splendid views over Kyoto.

Dine near the River at Pontocho 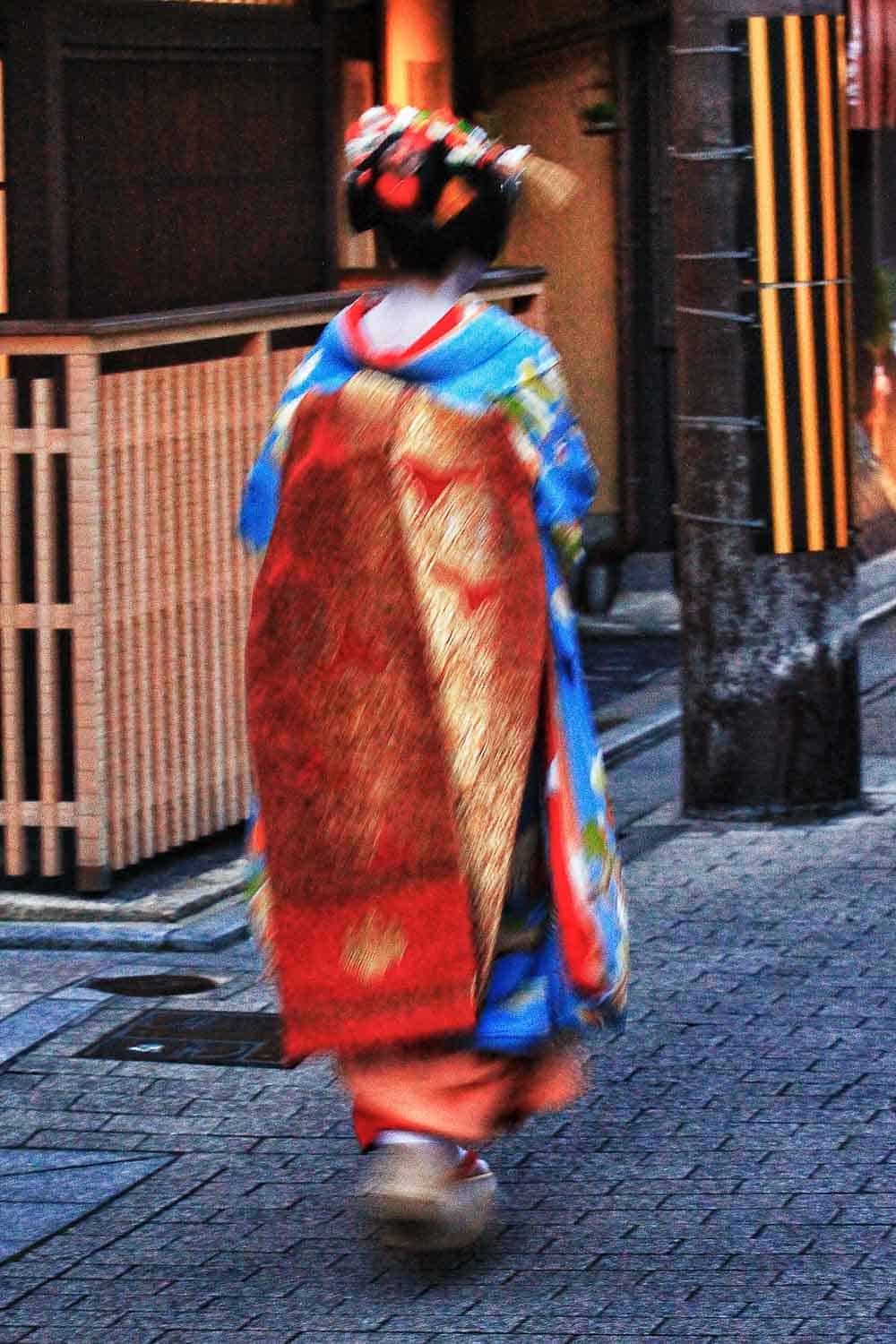 A Geisha walking by

It’s a place where locals drink and dine, decorated with red lanterns and frequented by geisha’s and maiko’s in traditional kimono dress. 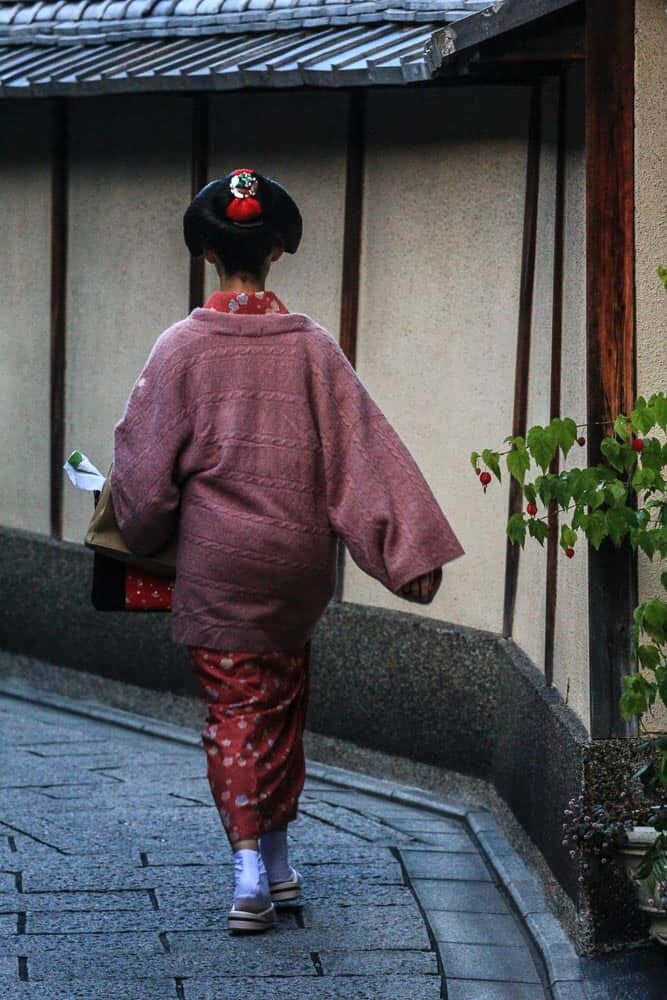 The place is abundant with eateries, which range from reasonably priced to expensive and some have outdoor decks, where you can dine alfresco under the stars whilst soaking up the magical atmosphere.

Nishiki Market dates back several centuries, and you’ll find some stalls are still owned by the same families generations later!

This five-block long shopping emporium in central Kyoto boasts over 100 stalls and restaurants.

It’s known by locals as the kitchen of Kyoto as vendors sell a multitude of tasty Japanese specialities and seasonal produce.

If you are browsing, be sure to sample the soy milk donuts which are light, soft and crispy and for savoury lovers, try uba with mushrooms and greens steeped in soy and mirin sauce.

This pleasant pathway next to a narrow canal is best viewed during ‘sakura’ or cherry blossom season. It’s lined with hundreds of trees creating a sea of beautiful pink around you as you walk. 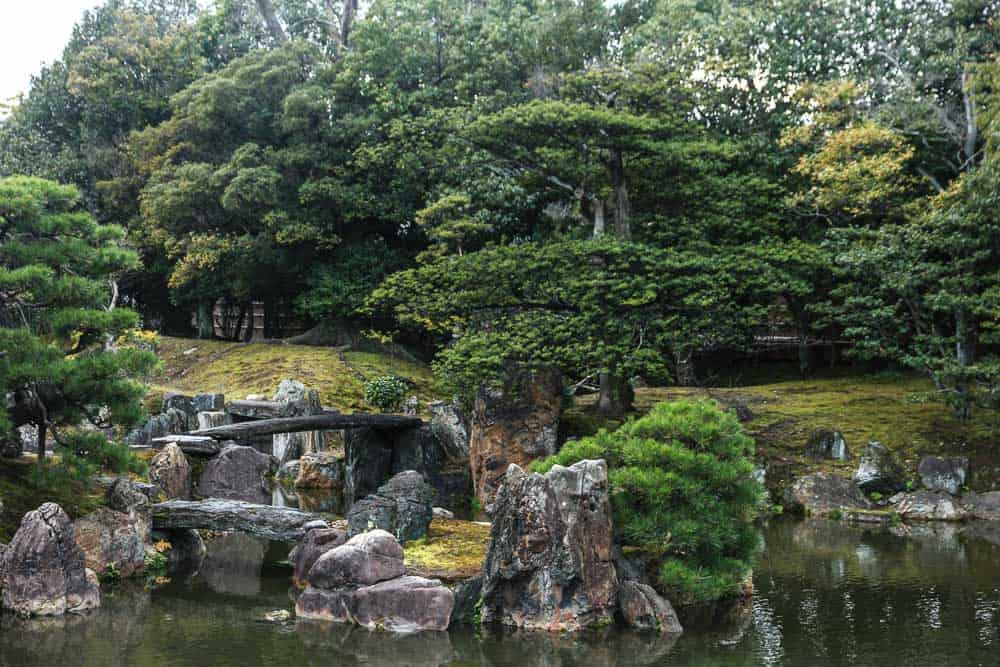 Relax in a park

The pathway begins near Ginkaku-Ji and concludes in the Nanzenji neighbourhood close to the Museum of Kyoto.

The pathway is named after one of the country’s most famous philosophers who was said to meditate as he walked it each day to the university.

You’ll find a scattering of cafes, restaurants and shops along the path and several shrines and temples where you can stop to admire the architecture or make offerings.

Maruyama Park located next to Yasaka Shrine in Kyoto comes to life in early April when the park is filled with blooming cherry blossoms.

It’s the city’s top spot for sakura viewing parties, known as ‘hanami’, and the central tree is illuminated at night creating a magical fairy tale atmosphere.

Tables and benches line the park, making it a perfect spot for picnics and drinks with friends and a place for amazing photo opportunities.

Japanese people know a thing or two about natural products and their health benefits, which is why in Kyoto, you’ll find a multitude of cakes, fruits and ice creams laced in bright green matcha powder.

Matcha green tea leaves are grown throughout this region, and when the leaves are crushed into powder, they can be used in traditional tea ceremonies, to bake cakes with or can be added to a café latte.

All across Kyoto, you’ll discover delicious treats covered in green sprinkles. It may not look too appealing, but rest assured this health-boosting powder is packed with antioxidants which can ward off any ailment!

Matcha may be an acquired taste, but if you try it with something creamy and sweet such as ice cream, or a tasty cake treat you’ll soon be hooked!

If you want to observe tradition at its best, you should experience a Japanese tea ceremony.

These ceremonies are said to represent living simply, being at one with nature with the importance of living in the present.

The authentic tea ceremonies are held throughout Kyoto, but there are a few rules to follow.

One must learn how to correctly enter and exit the room, how to handle the equipment and know-how to prepare the tea the Japanese way.

It’s a fascinating cultural experience, which evokes artistry and skill and one not to be missed whilst staying in Kyoto. 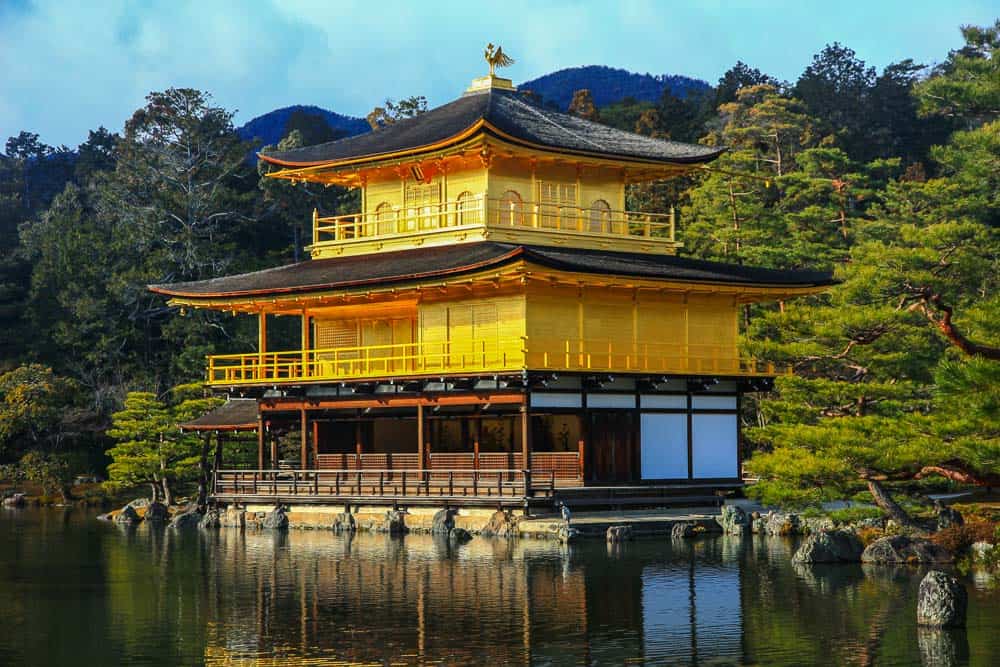 The Buddhist temple of Kinkaku-Ji – also known as ‘Temple of the Golden Pavilion’ is one of the most visited historic sites in Kyoto.

Set on a tranquil lake in the city, its original history dates to 1397, although it has been rebuilt several times since then.

The three-storey building designed in distinctive shinden, zen and samurai styles is covered in shimmering pure gold leaf and houses relics of the Buddha. 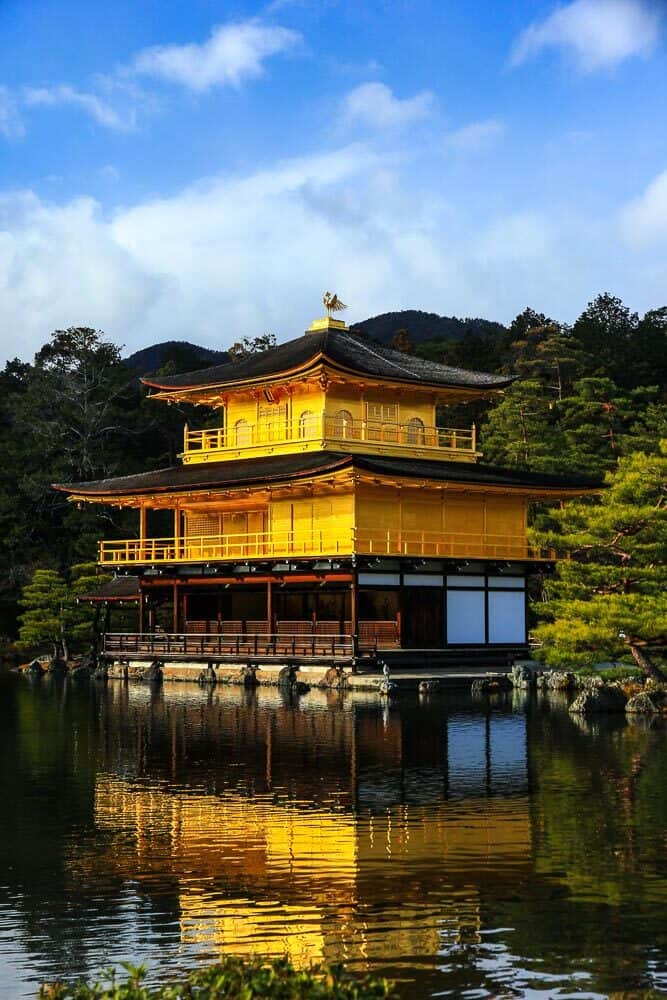 The temple is surrounded by classic Japanese ornamental gardens which highlight views of the pond, islands, pavilions and landscapes.

It’s a great place to meditate and be still amidst the hustle and bustle of the city and a must-see for history enthusiasts and those with interest in the Buddhist philosophy.

Get Back to Nature in Arashiyama Bamboo Forest 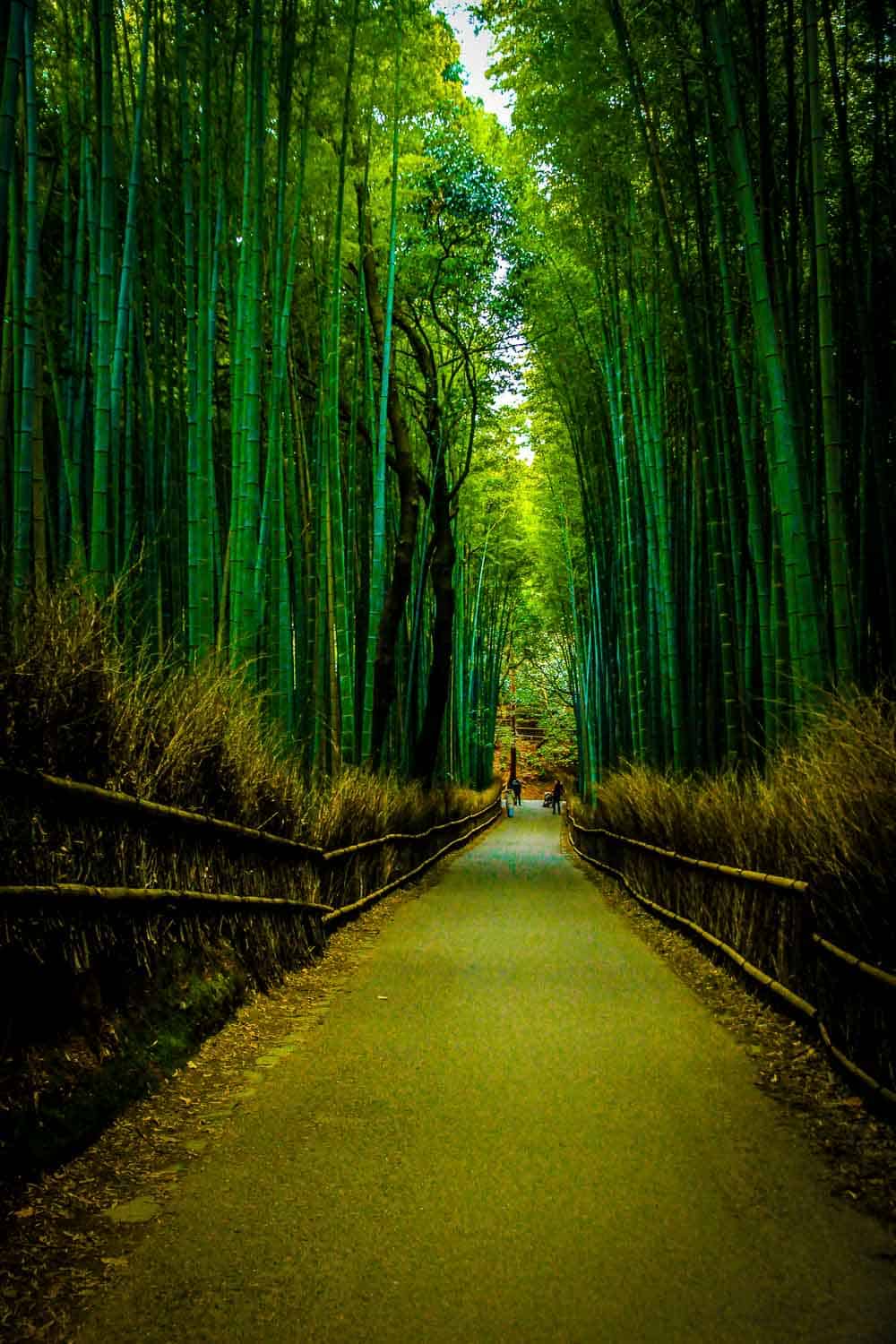 Arashiyama bamboo forest lies 20 minutes west of Kyoto and can be accessed via train. Its towering bamboo plants cover 16 square kilometres, and cool winding paths make it the perfect escape from the city.

Nature lovers and photographers will adore the diverse eco-system here as you can even catch a glimpse of giant pandas in their natural habitat, mountain gorillas and rare species of birdlife, after your exploration venture to Tenryu-Ji, a nearby ancient temple set in scenic gardens which holds several cultural treasures including a wooden carving of Gautama Buddha and illustrations and writings which date back centuries. 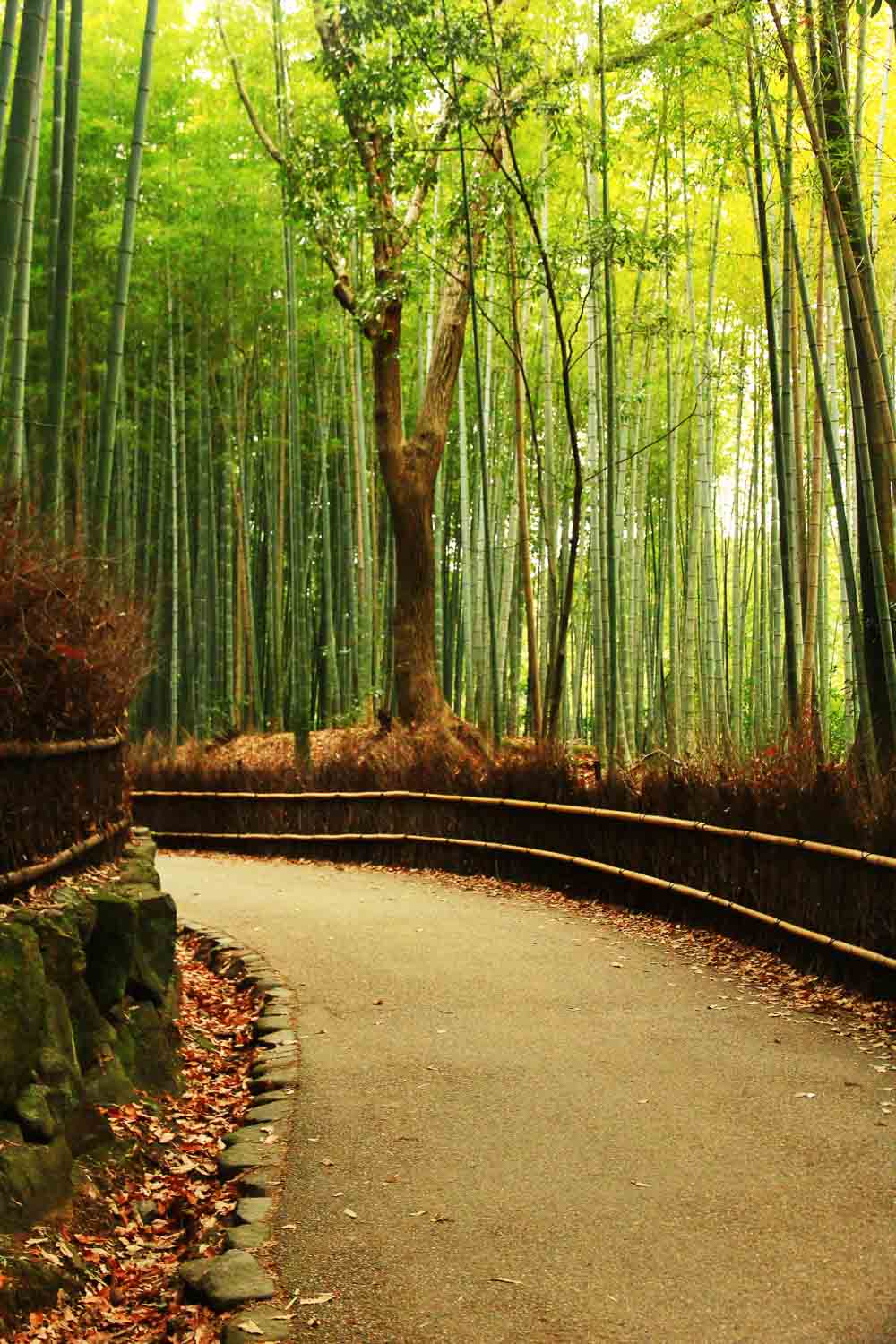 Delve into Centuries of History at Nijo Castle 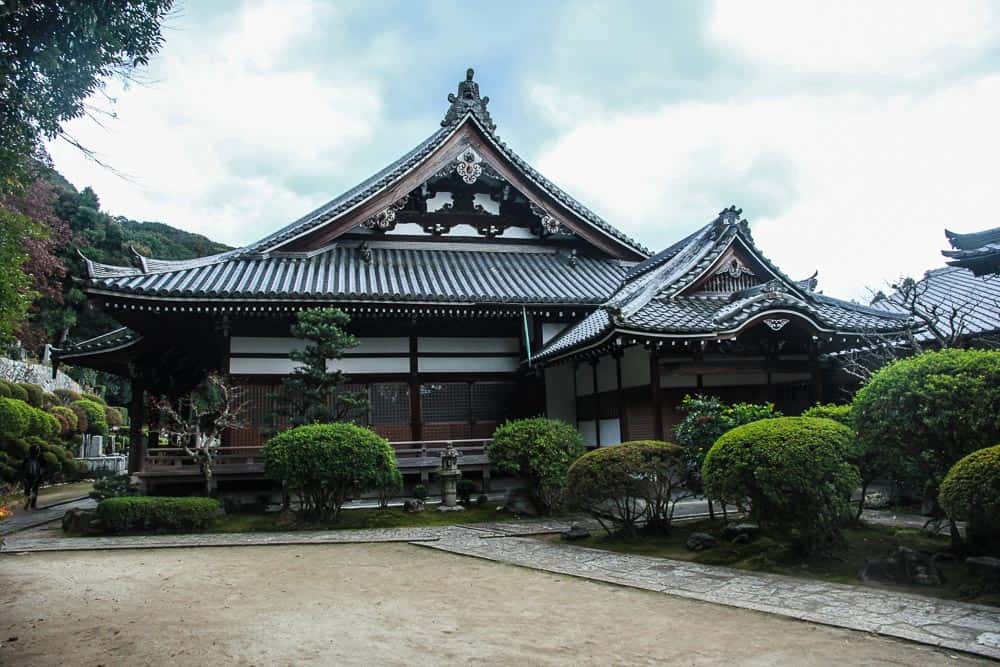 The castle became the residence of the first shogun during the Edo period and was later utilised as an imperial palace before it was given to the city and opened to the public.

The buildings are so well-preserved that in 1994, the flat castle was designated a UNESCO World Heritage Site. 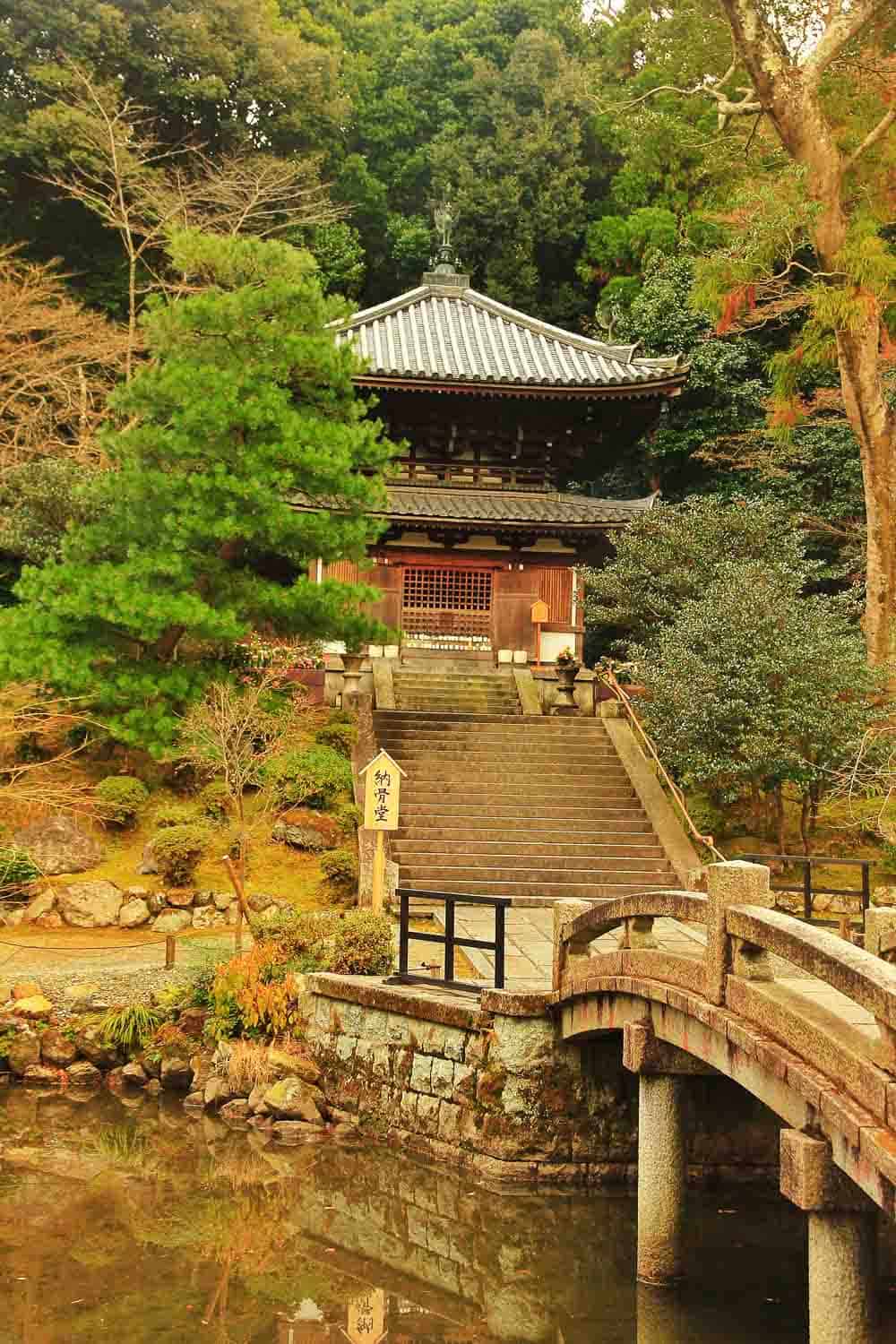 The fascinating walking tours transport you through palaces, gates, gardens and audience rooms where only the highest-ranking visitors were allowed to enter to view the shogun.

You’ll learn about the rich history accompanying the castle and also about the people who once lived here.

How to Get to Kyoto

The nearest airport to Kyoto is Osaka International Airport 50 minutes away by bus.

The airport serves mainly domestic flights – perfect if you are travelling from other cities in Japan.

You can also fly into Kansai International or Central Japan International Airports both 90 minutes from central Kyoto by express train and shinkansen (bullet train).

Kyoto can be reached from Osaka International Airport by shared taxi van and limousine bus.

Alternatively, if you plan to enjoy a two, or three-centre holiday in Japan, you can also travel to Kyoto by high-speed train from Tokyo via the Nozomi bullet train in 2 hours 20 minutes and on the Hikari train in 2 hours 40 minutes. 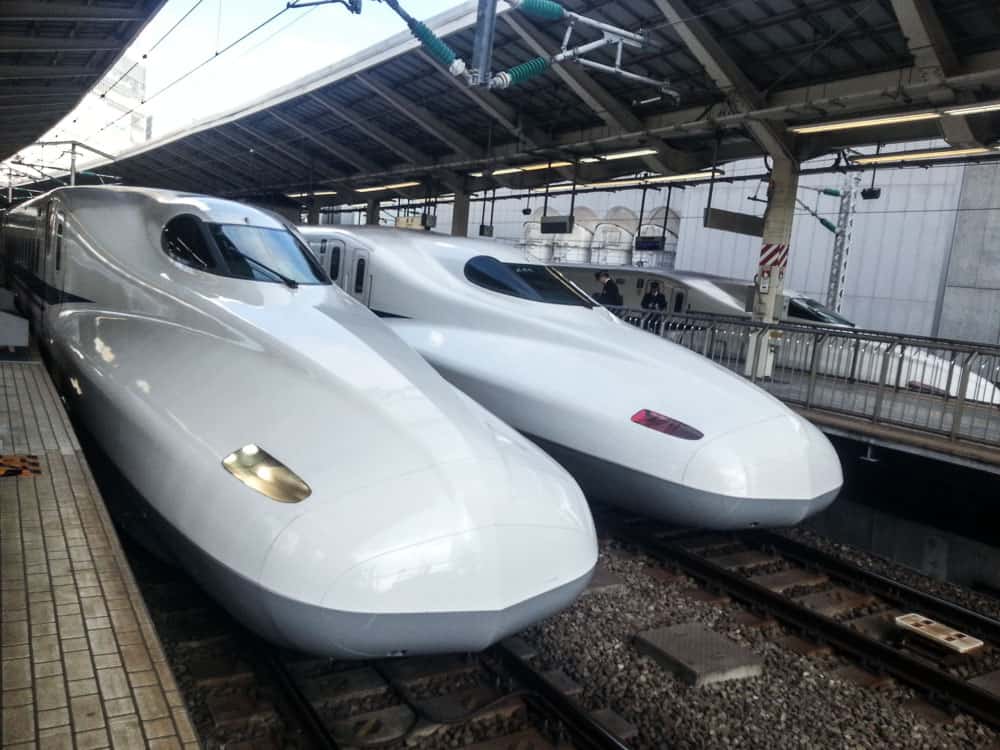 If planning to visit several cities in Japan during your stay, you may wish to look into purchasing a Japan Rail Pass which offers unlimited travel for a week. 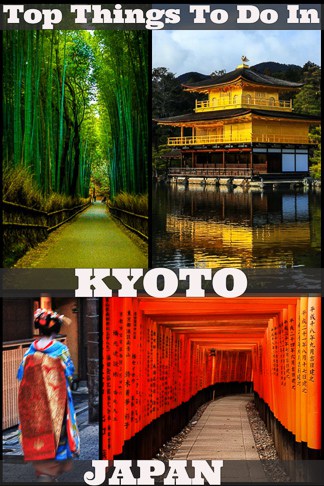 Travel guide and top things to do in Kyoto Japan