On the top of the world is where Svalbard is located, an archipelago situated between Norway and the North Pole, a place that the world forgot for nearly a decade, a Russian mining town established by Sweden in 1910 but then sold to the Soviet Union in 1927 and then completely abounded in 1998 after the collapse of the Soviet Union. 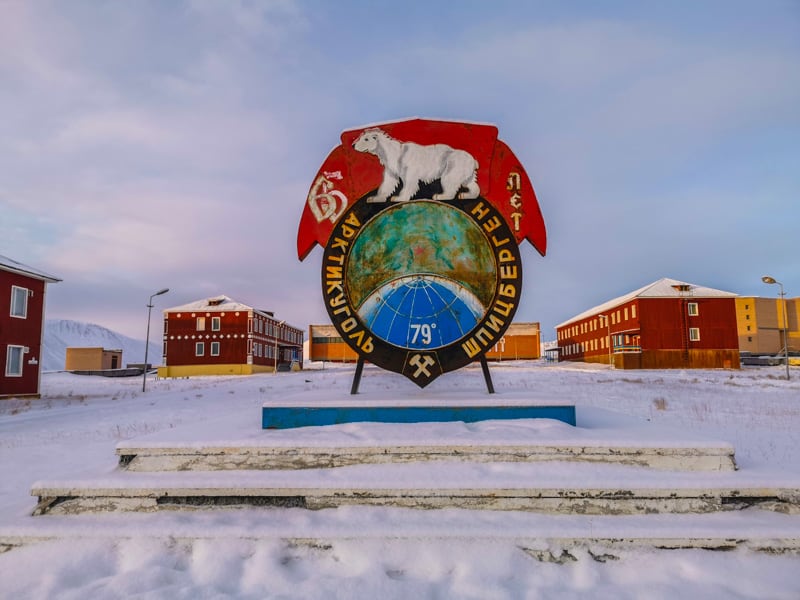 The Pyramiden sign, fun fact, the painter who painted the signed lived in Moscow and had never seen a Polar Bear, so he painted it like a dog without a tail.

Pyramiden got its name from the mountain overlooking the town.

During its peak in 1980, the population here was more than 1000, mostly Russian Arctic miners with their families who enjoyed their life here in the Arctic, these days only eight people live and work here full time, all working with tourism.

But they are currently restoring another building these days, to accommodate more staff due to the rapid increase of tourism in Puramiden. 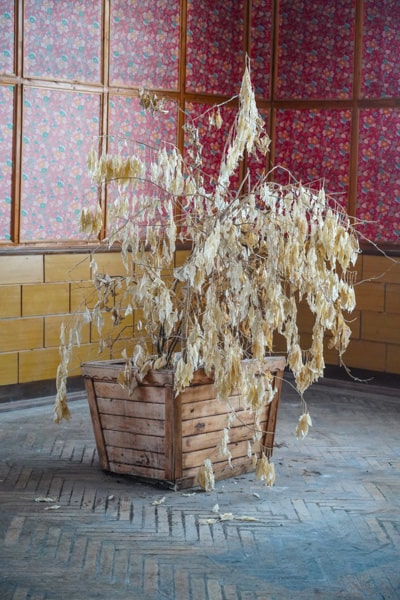 Old Flowers in the cantina, they could probably need some water 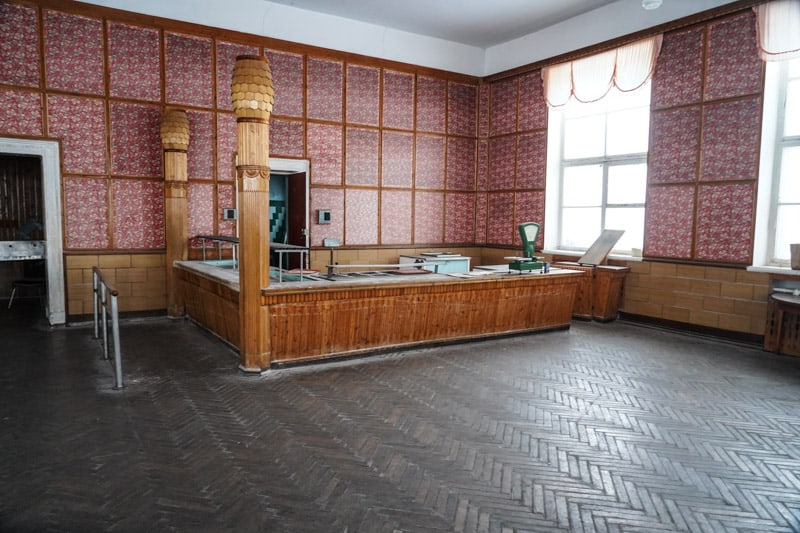 from inside the cantina

Pyramiden was like any other town in the world in the ’80s with a cinema with daily movie screenings, a library with 50 000 books, an indoor heated swimming pool a 24/7 cantina, a petrol station, a greenhouse for fresh vegetables where they grew tomatoes, cucumbers, lettuce, peppers, ornamentals and more.

The people living here raised its own pigs, chickens and cattle. And all the heating and electricity cam coal that workers mined. This place was almost completely self-sufficient society.

There´s no WIFI or phone connection here, your completely of the grid. 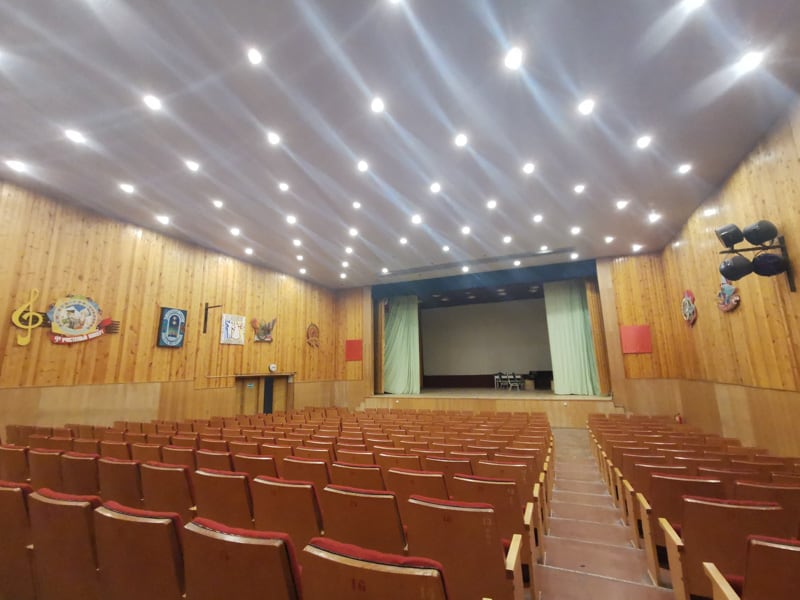 Inside the Cinema and concert hall. 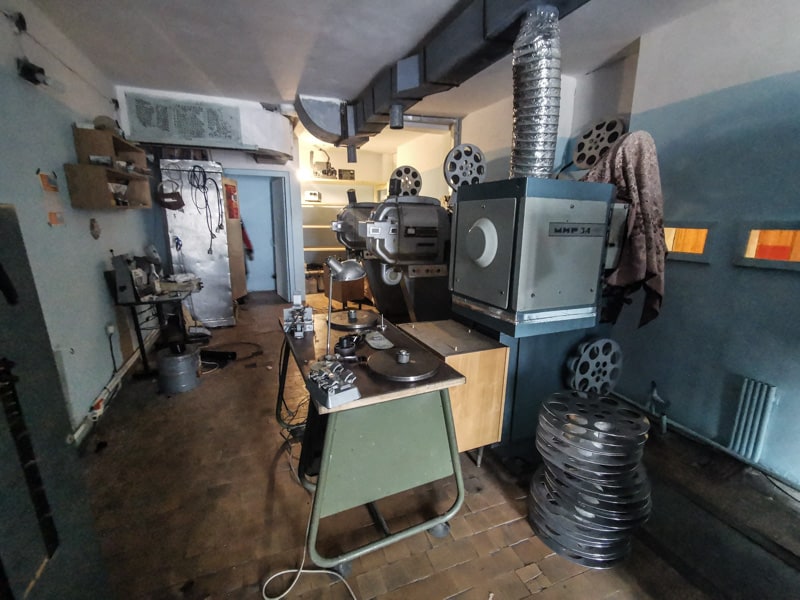 In 2019 did they manage to repair the old USSR projectors, and during the summer season are they showing movies almost daily in the Cinema.

A school and a kindergarten, a sports hall with all other facilities that you would expect in a Soviet city in the 80s. 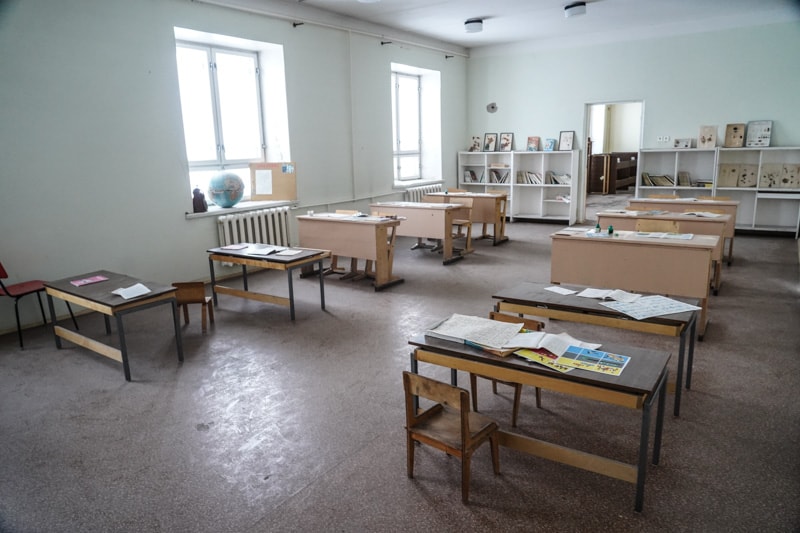 Inside an old classroom 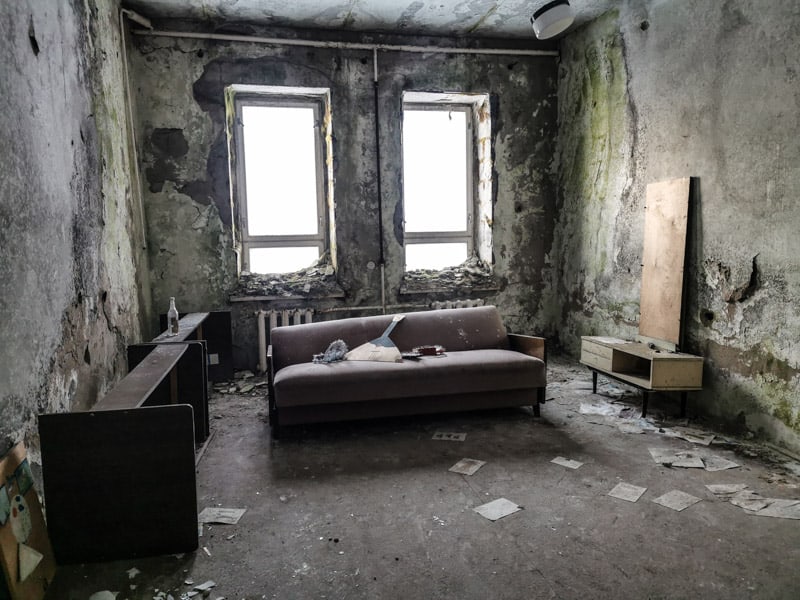 A room in the school building, notice the balalaika 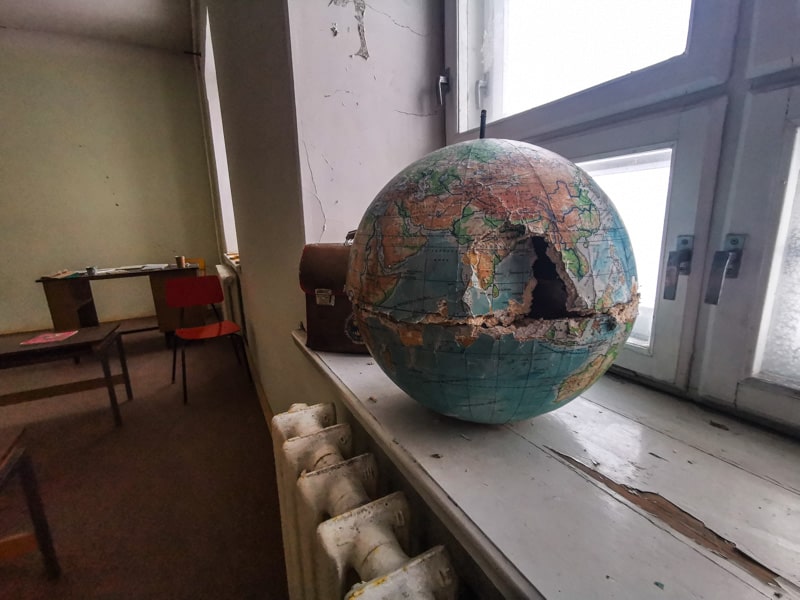 An old broken globus in one of the classroom

And of course, there´s a Lenin statue here, the most northern one in the world. 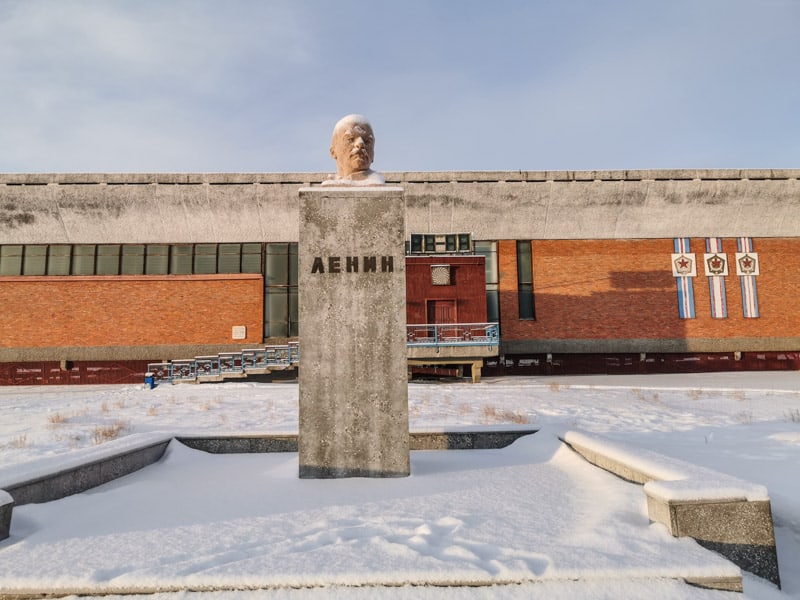 Lenin Statue in front of the Sports Hall. The most northern located Lenin statue in the world. 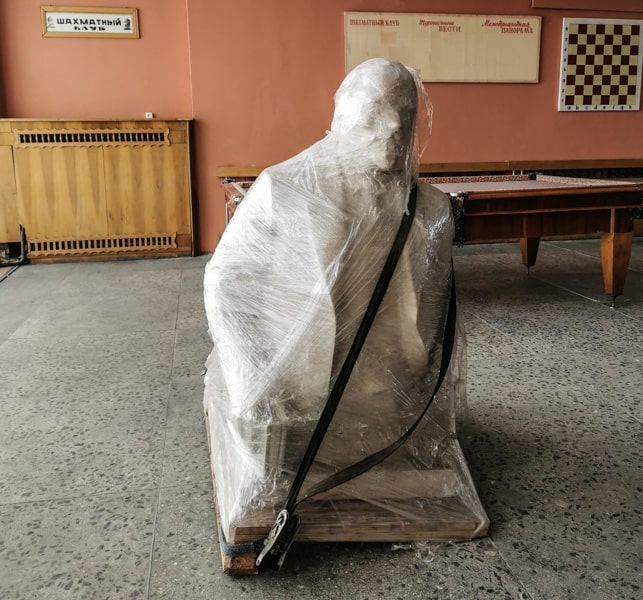 A Wrapped up Lenin

Pyramiden was considered to be a very good place to live and work during the USSR, and even the grass here was imported from Siberia to make Pyramiden a more liveable place. The people who worked here for two years earned enough money to buy a good flat back in Moscow.

Pyramiden was one of the very few towns in USSR that any foreigner could come without a visa.
Pyramiden served as an exhibition of the best of the Soviet Union.

But when the Soviet Union collapsed in 1991, the population in Pyramiden rapidly decreased until Pyramiden was completely abandoned in 1998, but by then only a few miners remained in Pyramiden. It soon was forgotten and left for its own destiny. 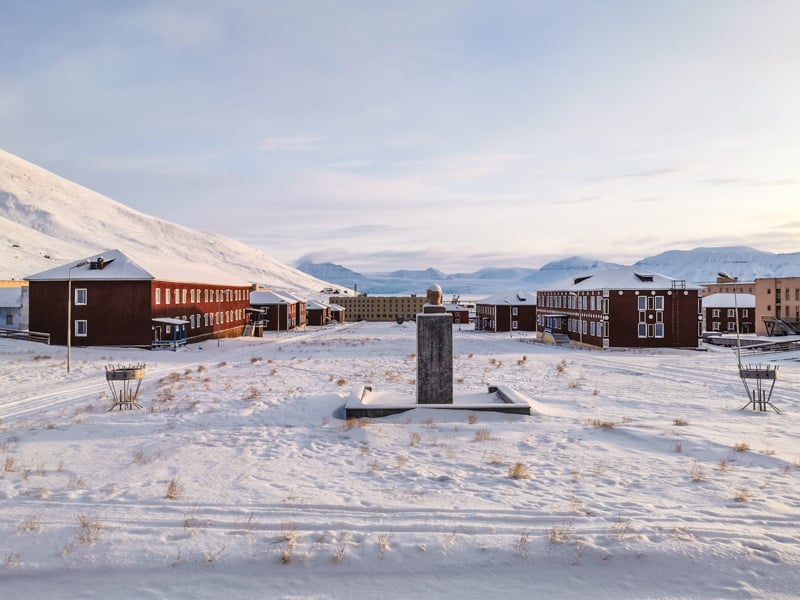 Looking down the main street, the red building on the right side is currently getting rebuilt to house more staff with the increase of tourism. 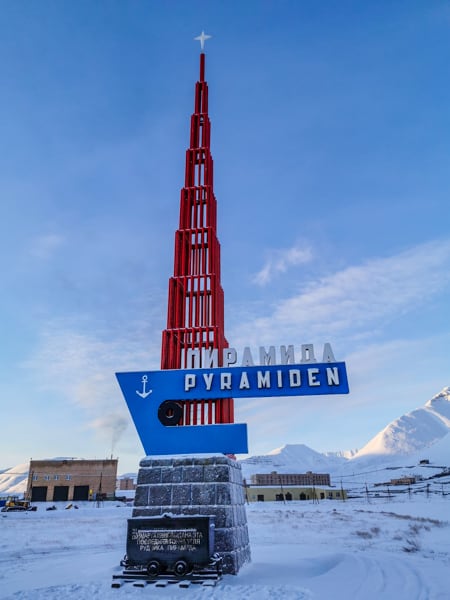 The Pyramiden sign at the entrance to the town.

Due to the cold climate have most of the buildings remain just as they were left, but after tourists started to re-discover the place since 2013, and things were taken away, are now all the buildings closed off, and you will need a guide to enter.

Today visiting Pyramiden is like travelling back in time to the USSR, to a forgotten time here at 78° North, where it looks like everyone left in a hurry (even, the desertion occurred over a period of months.
But the last school shut down in 1993) like there would be no tomorrow with flowers still in windows, family photos on the walls, plates on the table etc. 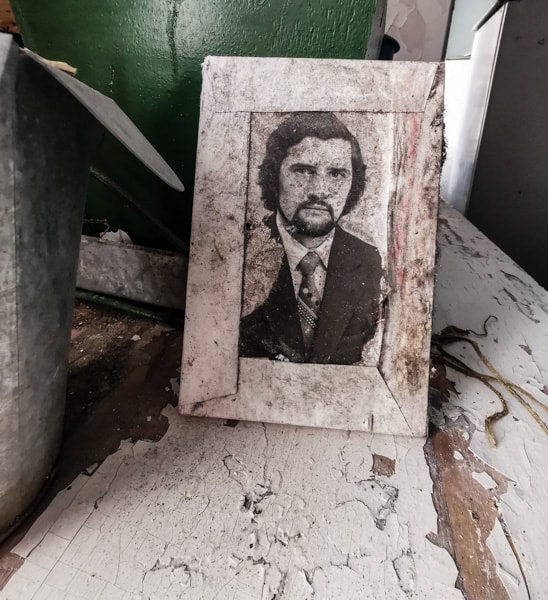 A family photo that is left behind 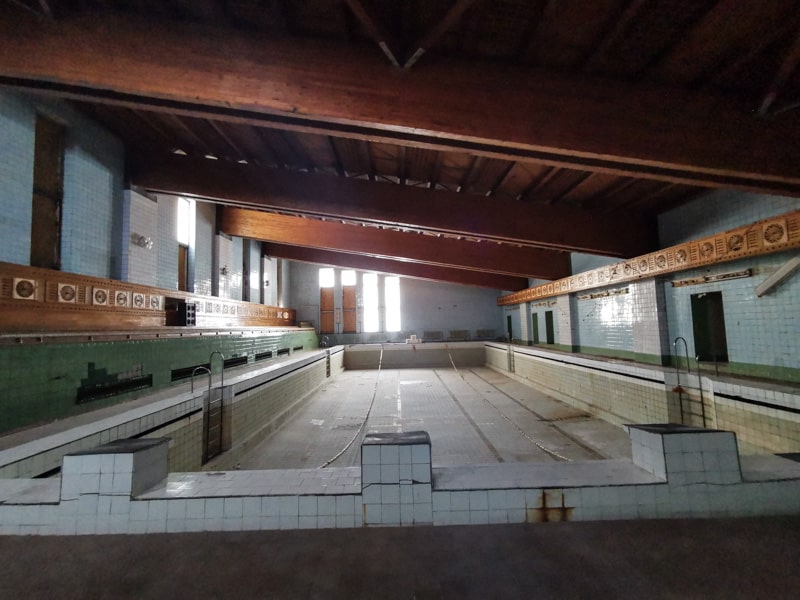 The swimming hall in the town. 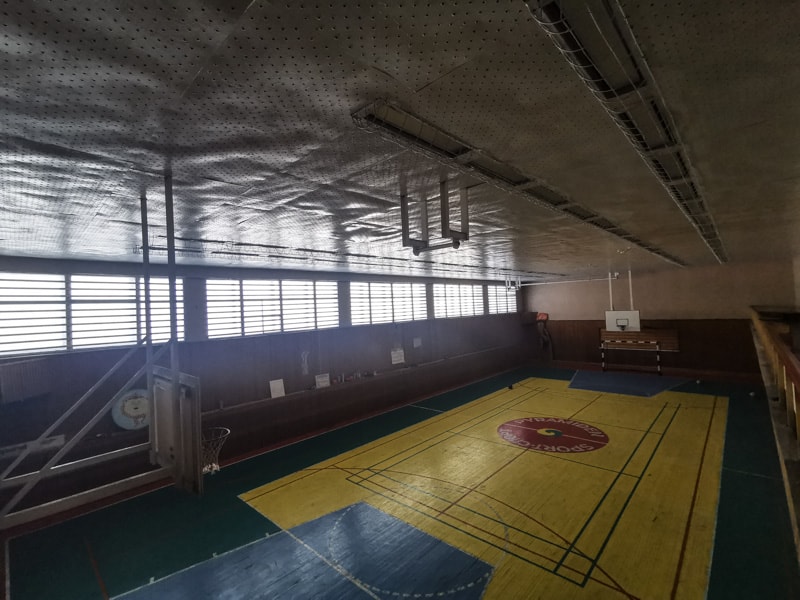 But one thing that hasn´t changed here, Pyramiden is not connected by any roads from other parts of Svalbard/Spitsbergen, the only way to get here is by boat in summer, and by Snowmobile in winter.
Which is an adventure on its own, especially during winter when you will have to drive across a frozen glacier and the frozen Billefjord to be able to reach Pyramiden during the cold winter months.

How to Get To Pyramiden on Svalbard.

During the summer months from mid-May until the beginning of October when the waters are ice-free can, Pyramiden can be reached by boat from about Longyearbyen the largest town on Svalbard/Spitsbergen.

But throughout the cold winter months from November to late April, including, three months of which are engulfed by 24-hour darkness, can Pyramiden be reached only by Snowmobile on a 140km drive from Longyearbyen. 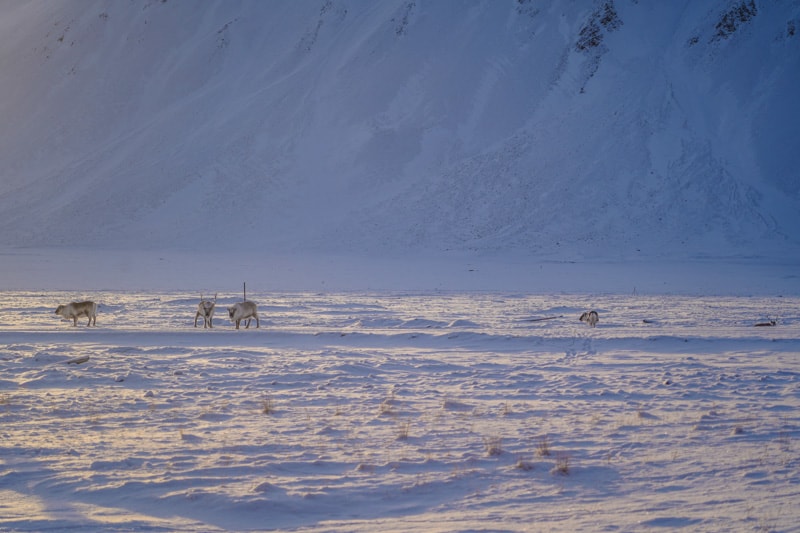 An arctic fox having a look.

During the three polar night months, will the whole place close down and the only visitors hare are only the occasional stray polar bear who lives in the area together with arctic foxes and reindeer. 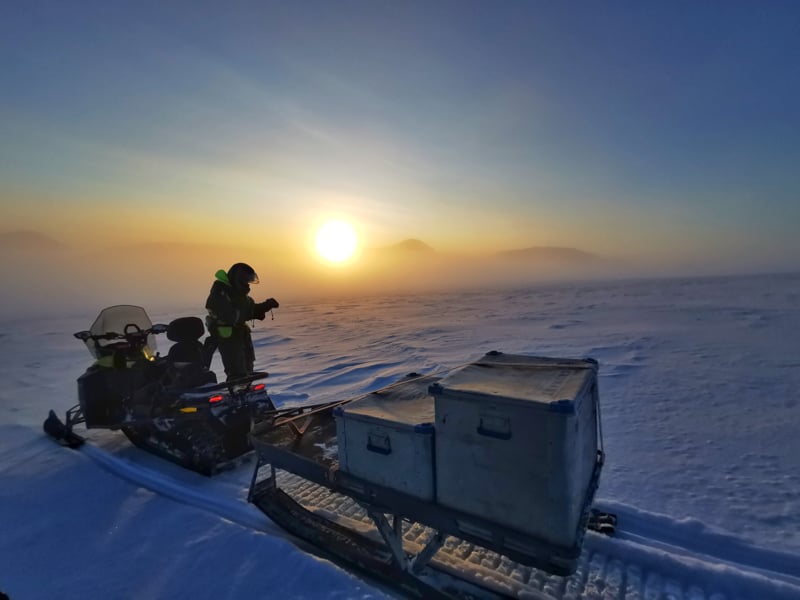 During the cold winter, months are Snowmobile the only way of transportation

The only accommodation option here is the newly renovated Pyramiden hotel. In contrast, the hotel looks USSR style from outside, so only some parts inside the hotel kept in the traditional USSR way.
Pyramiden also hoses a Norwegian post office, the world´s second-most northern only after New Ålesund, and a very well-stocked bar, as well as a well-stocked souvenir shop in the post office. 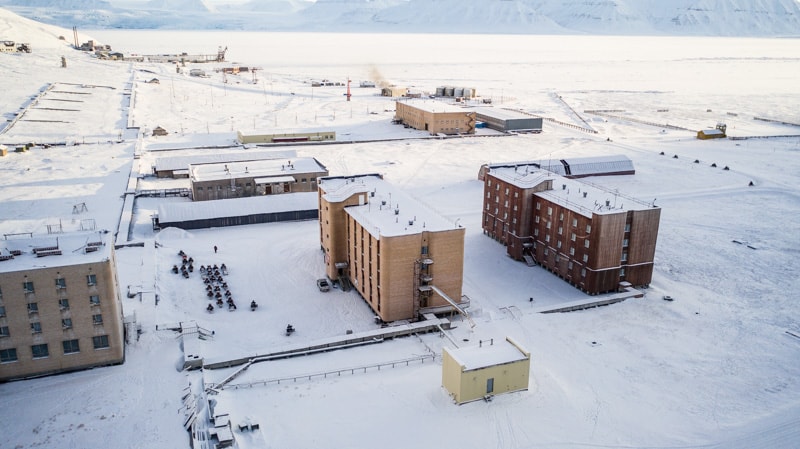 Snowmobiles parked up outside the only hotel. 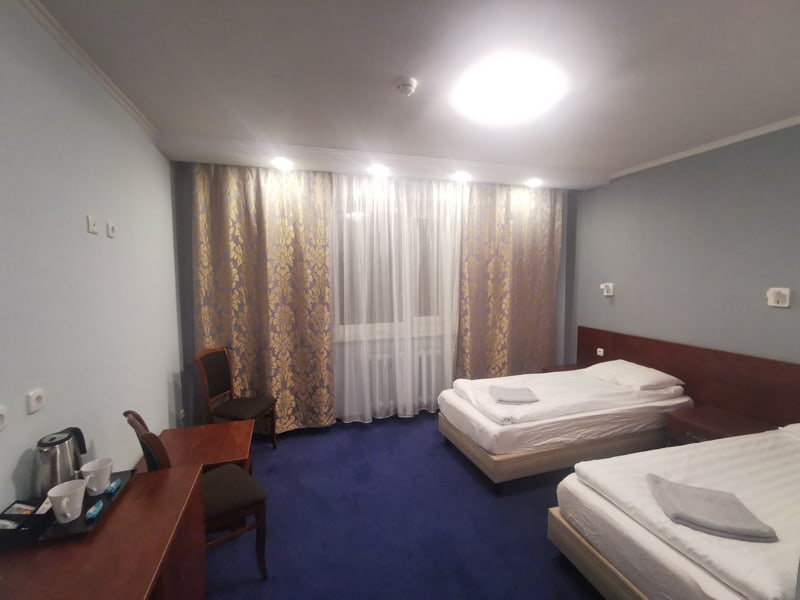 The newly renovated rooms at the Hotel. 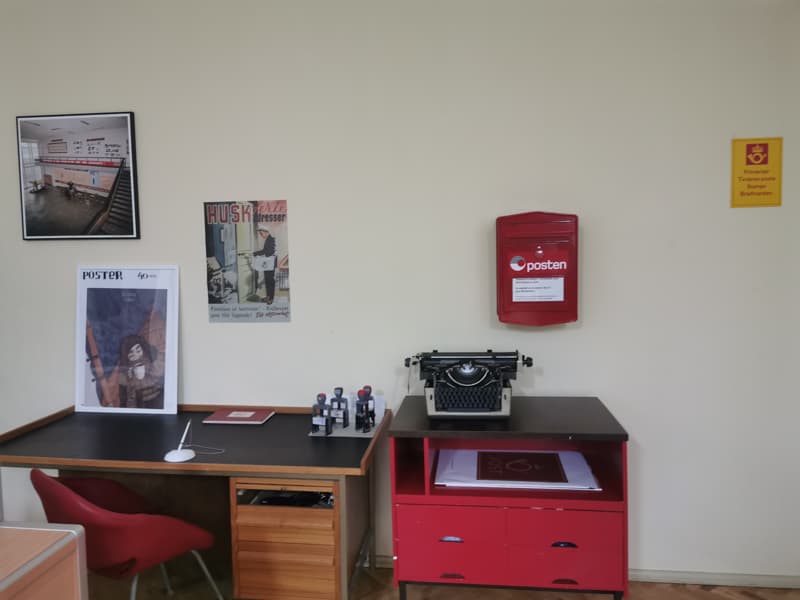 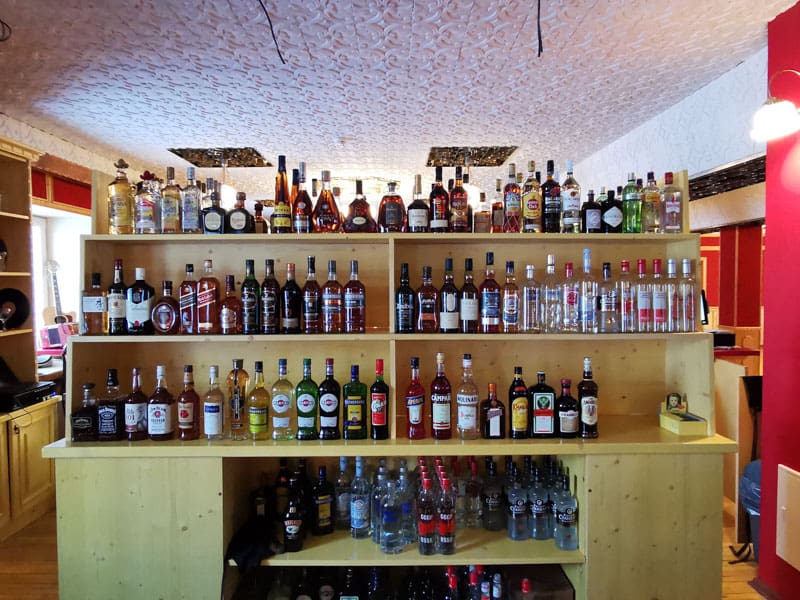 The well-stocked bar in the hotel. 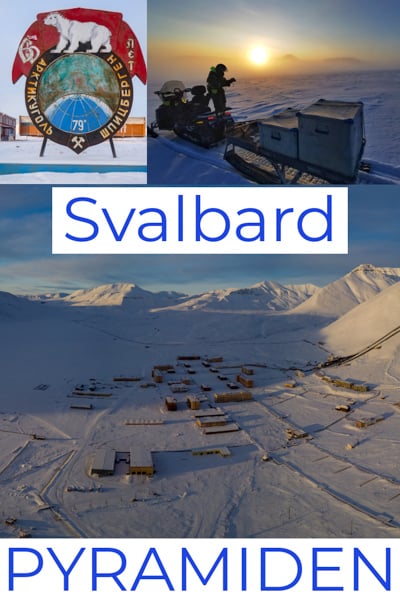 Travel Guide To Pyramiden one of the world´s most northern towns. A USSR mining town in Svalbard/Spitsbergen.