Visiting The Great Mosque Of Samarra In Iraq. A UNESCO World Heritage Site In Danger.

The 120km north from Baghdad in Central Iraq to the holy Shia city of Samarra takes you along the highway also known as the “Death Road” (not to be mistaken by the Highway of Death in Southern Iraq) by American soldiers after the 2003 invasion due to all the IEDs which was laced along the road. 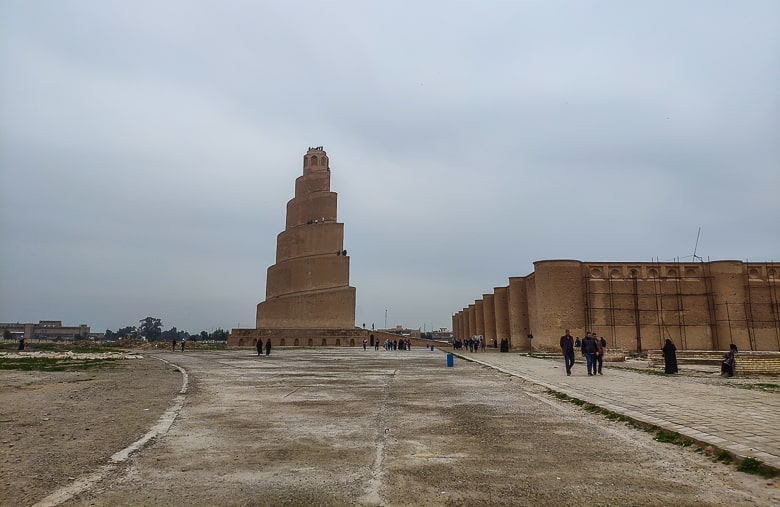 Walking Towards The Great Mosque Of Samarra. unfortunately was the weather terrible during my visit

In 2014 ISIS captured this area of Iraq, and the held it up to only a few years back, so there´s no surprise that´s there more than 50 checkpoints put up along the highway. Some often only a few hundred meters between.
Most of the checkpoints are not controlled by the Iraqi military but by Shia militias loyal to the big winner in the recent parliamentary elections in Iraq, Shia Cleric Moqtada al Sadr. 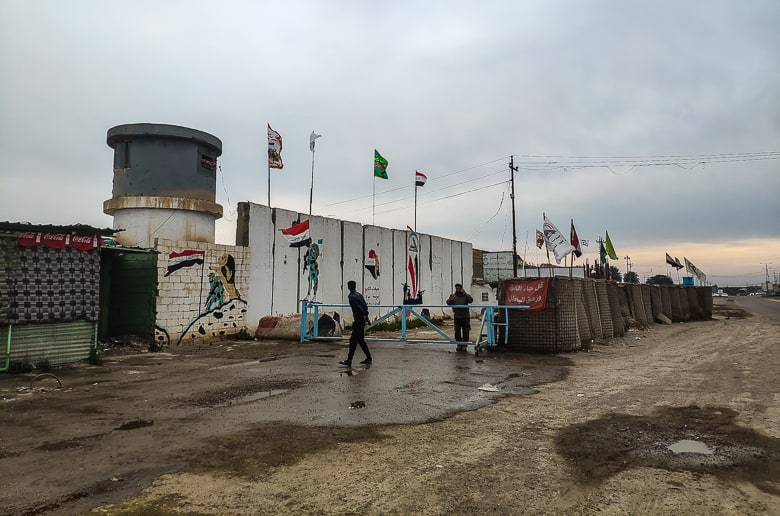 Military base along the way to Samarra.

Some of the Shia Militias soldiers controlling the checkpoints were so armed to the teeth that John Rambo would look like a boy scout next to them.

And it´s no wonder since there are a still some ISIS sleeper cells still hiding out around in the countryside around Samarra, and with the ISIS-held land almost completely gone, makes these sleeper cells even more dangerous and desperate, so on 19th February was a four-day military operation done by the Iraqi army done south of Samarra to clear out hiding ISIS cells.
A week after I visited Samarra. 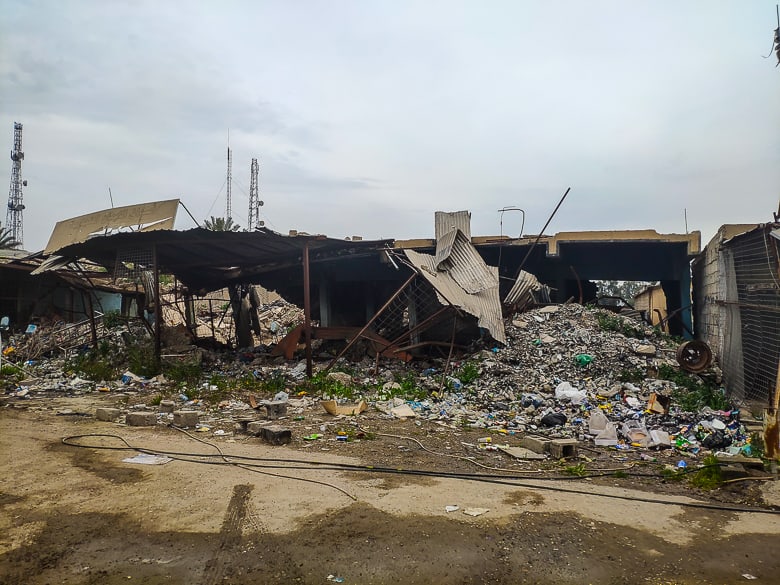 Destroyed buildings from the war against ISIS along the way to Samarra.

Travelling along highway nr One in Iraq, reminded me of the road I took from Homs to Aleppo in Syria in 2017, with the destruction along the side road, but luckily did ISIS not attack the road this time, as they did on my trip in Syria.
Entering Samarra itself took hours to clear the final checkpoints, which is surrounded by tanks, anti-aircraft guns and hundreds of meters of blastproof concrete walls.

The holy Al-Askari Shrine, built-in 944, which is one of the most important Shia shrines in the world is located within the city of Samarra. The Shrine was blown up by terrorists in 2006 and agian in 2007, which sparked violence and anger all over Iraq leaving thousands of dead and injured in the aftermath and protest after the bombings.

The Al-Askari  Shrine was rebuilt and opened in 2009.  I was not able to visit the Shrine. 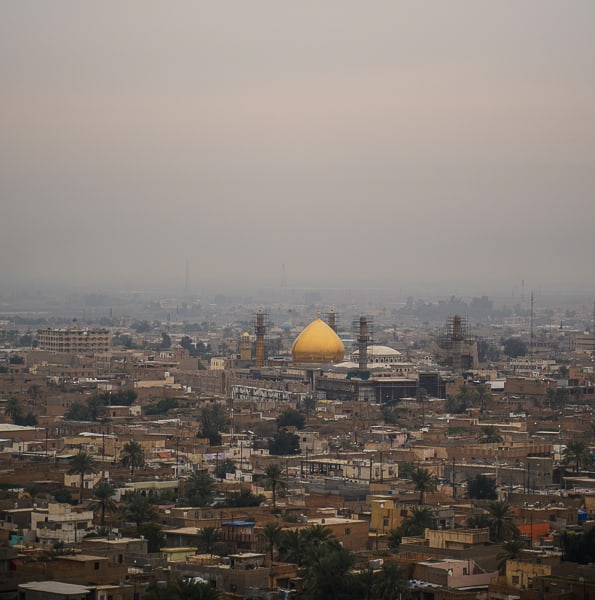 The Al-Askari  Shrine is far distance as seen from the top of the Minaret / Malwiya Tower.

Samarra is located on the left banks of the Tigris River is a city with a rich with a history going back more than 7000 years when this land was first settled. 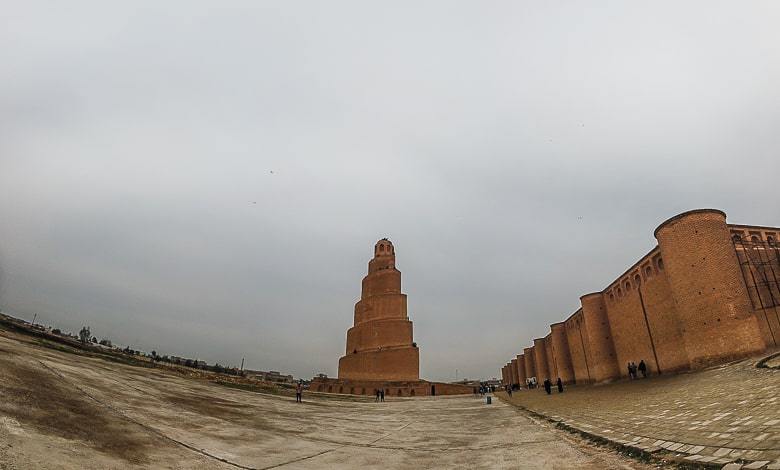 I am walking Towards The Great Mosque Of Samarra. Unfortunately was the weather terrible during my visit — the outer walls of the Great Mosque on the right side. 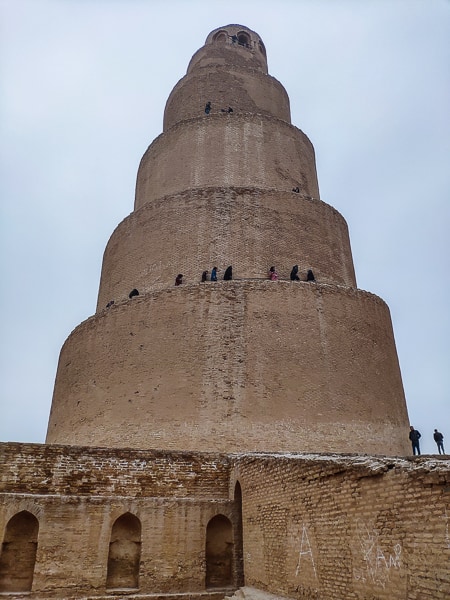 Close up with the Minaret /Malwiya Tower. 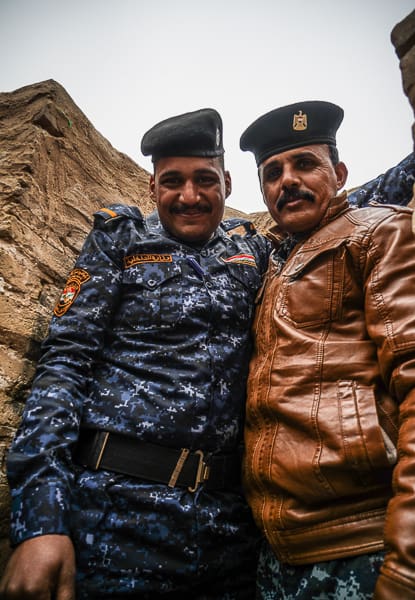 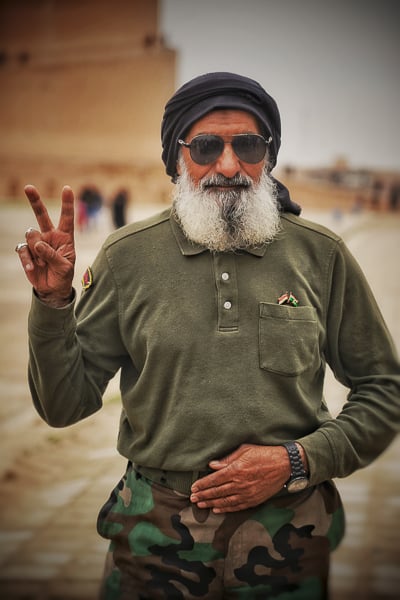 Which was when The Great Mosque if Samarra built, an architectural masterpiece at that time, the Mosque covered an area of 38.000 meters and remained the largest Mosque in the world until the end of the 11th century, Almost 400 years before it was destroyed by the armies of the Mongol ruler Hulagu Khan during the invasion of Iraq in the year 1278.

It´s considered to be in danger due to years with lack of Government Control in the area.

The only remaining structure in Samarra today is The outer wall of Great Mosque, and the 52 meter/171 feet tall Minaret called the Malwiya Tower. 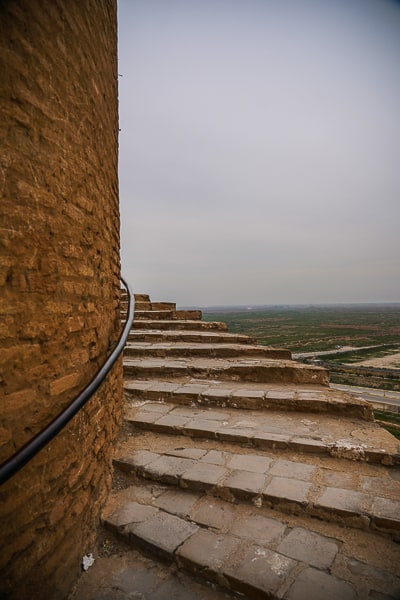 Climbing to the top of the Tower. 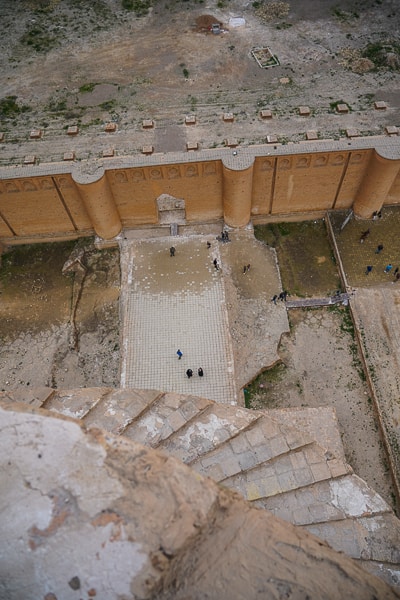 Looking down from the top of the Minaret, no faces on the top stopping you from falling the 52meters down. 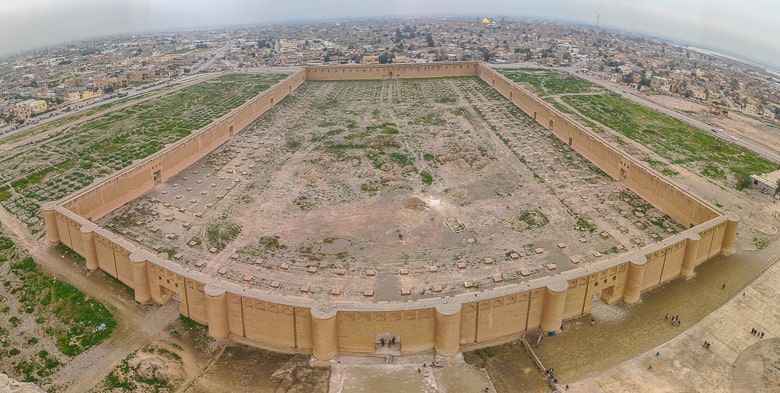 Looking out over the remains of the Great Mosque of Samarra from the top of the Minaret /Malwiya Tower. 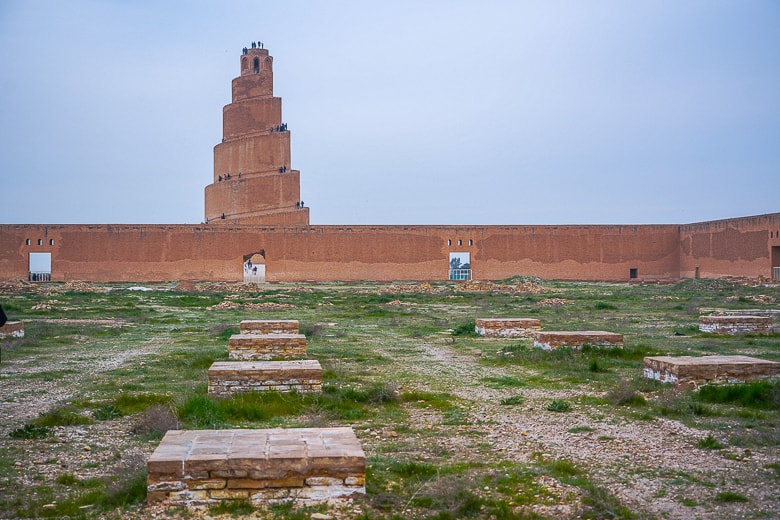 Inside the Great Mosque of Samarra.

The Minaret stood almost undamaged for more than 1000 years through all kinds of weather, earthquakes and various wars before it was partially destroyed in April 2005, when insurgents bombed the tower because U.S. troops had been using it as a sniper position. 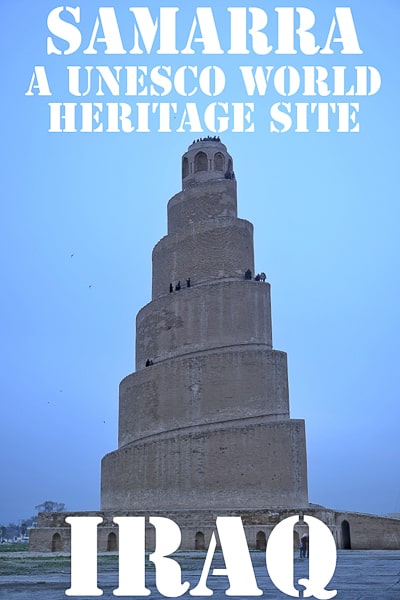 Visiting The Great Mosque Of Samarra In Iraq. A UNESCO World Heritage Site In Danger. And travelling along the road of death.

Chapursan Valley: A Beautiful Remote Valley In Pakistan.
← Previous
Traveling Through Iraq With The Local Train From Basra to Baghdad.
Next →
Click here to cancel reply.

could you please tell me what are the current functions of the place? is it a tourist spot? or do locals come to visit? or is it just abandoned? (except by the army of course)

Hello Anqa. Samara is one of the most important Pilgrim places in the world for Shi'a. For that, there´s always touris visting the ruins of the Great Mosque of Samara.