Arunachal Pradesh is more similar to Nepal and China than India.

Arunachal Pradesh is one of the seven sister states and one of two Buddhist states together with Sikkim in North East India, and the last one you need a permit to visit.

I have already covered two of the other states: “Nagaland,  The forgotten India on a budget” and “Kaziranga National Park, Close-up with One-horned Rhinos.”

Arunachal Pradesh is so different from the rest of India. For the most part, Arunachal is unexplored, so you still have places where no western tourists have been.

It’s one of the least developed areas in Asia, so there is a lot of virgin nature and local tribes living traditional lifestyles.

When I was researching Arunachal Pradesh before I decided to visit I was very surprised that even the latest information was years old.

The Lonely Planet was completely useless, and enquiries made on various forums always returned the answer that it’s not possible to travel there on your own – or you are required to have a guide and bla bla bla. You don’t.

So, I decided, as I always do when I’m not satisfied with my research, to head over and figure it out upon arrival.

First of all, YES you do need a special permit to travel in Arunachal. Even Indians do. The permit is not cheap and takes at least a week to receive.

Normally you have to go through a registered travel agency in Arunachal.  Usually, at least two people are required to obtain the permit into the city.

Luckily, I received my permit in a week, and I travelled alone.

If you are planning to go there please can send me a message and I’ll pass on the contact of the contact person who fixed my permit. But I can’t promise that he will obtain it.

When entering Arunachal Pradesh, you have to pass a checkpoint where you have to register your permit and passport information.

There are alcohol shops just across the state border, and lots of Indians from the state of Assam are crossing the border just to buy alcohol – in a similar fashion to people back here in Norway travelling over to Sweden.

The first destination I wanted to visit in Tawang, the birthplace of the 6th Dalai Lama. Tawang is also the home of Tawang Monastery, – the biggest monastery in India since 1660.

The monastery is also recorded as the second-biggest in the world after Potala Palace in Lhasa, Tibet. It is also the home of the Monpas people.

According to Lonely Planet, the road to Tawang is one of the worst in the world. In fact, it’s not that bad at all.

In my opinion, the Lonely Planet is without use for Arunachal Pradesh and the rest of northeast India.

It appears that they have simply found old information online and put it in their book without having actually been to do their own research.
It is worth noting that there are a few checkpoints on the way to Tawang.

Since the Lonely Planet informed me that the road is so awful, I decided to stop-over in Bomdila, about half the way between Assam and my final destination in Tawang.

Like Tawang, Bomdila also holds stories about the Dalai Lama. The current, 14th, Dalai Lama passed through Bomdila when he escaped Lhasa in March 1958.

And it was in Bomdila when His Holiness the 14th Dalai Lama received the historic telegram from former Indian Prime Minister Jawaharlal Nehru granting him political asylum after his flight from the Tibetan capital.

These days, Bomdila is not more than a sleeping village with three small monasteries, a few hotels and restaurants.

The road to Bomdila is not actually bad at all. The scenery during the journey from Bomdila to Tawang is even more stunning than the road from Assam to Bomdila, so I was looking out the window and enjoying the view all the way. In my opinion, it’s some of the most stunning scenery in all of India.

Unfortunately stopping in Bomdila proved to be a small mistake since I was really struggling to find a hotel that allowed foreigners to stay.

If I had known beforehand that the road to Tawang is not so bad, I would have continued my journey to Tawang on the same day instead of stopping over in Bomdila.

I really can’t do justice to how stunning the road from Bomdila to Tawang and is sure to be a highlight of any Indian trip.

I would say that the world-famous road from Manali to Leh in western India can’t compare to the beauty of the Bomdila – Tawang road.

Unfortunately, I was taking a shared jeep on this part of the road.

If I had known that the road would be so good, I would have hired a private jeep and done a lot of stops on the way. 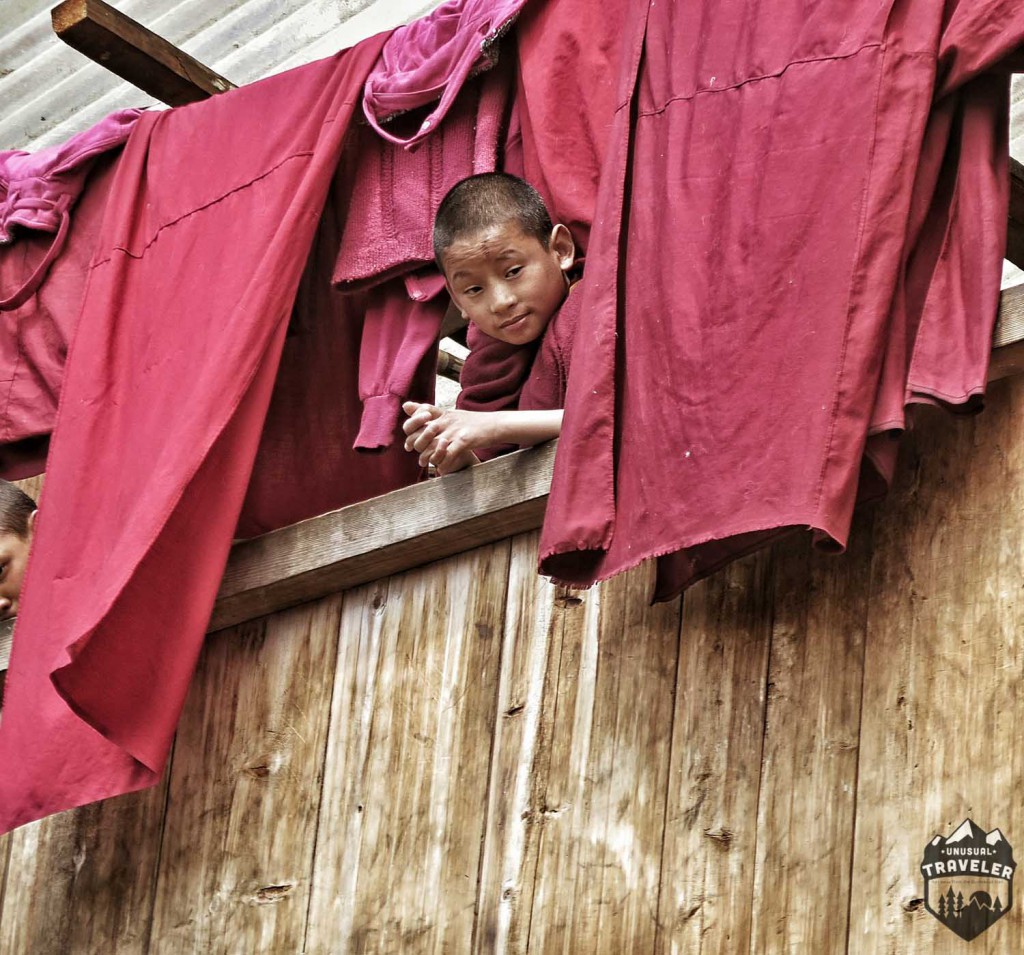 A young monk, looking out through the laundry room.

When you finally arrive in Tawang you will feel pretty relieved; there’s no problem to find a place to stay at all.

There are quite a few good restaurants, some tax-free liquor store and some very friendly local Monpas people that invited me over for a cup of tea.

Tawang is everything Bomdila is not. Tawang is actually a very tourist-friendly place, there is even a working ATM there and some of the guesthouses have working WiFi.
The town is small enough to walk around, but since it is very close to the Himalayas it’s not flat, there are lots of steep hills. I never found a problem hitchhiking around the area; every car stopped; I assume they are not accustomed to seeing foreign tourists in the area.

For most people, the main reason to visit Tawang is the amazing Tawang Monastery. And with good justification, it’s breathtaking. I have previously travelled to Tibet Lhasa in Tibet and visited Potala Palace.

While Potala Palace is even more stunning, it’s a bit disappointing since Potala Palace has been converted into a museum and you are not allowed to walk around freely. 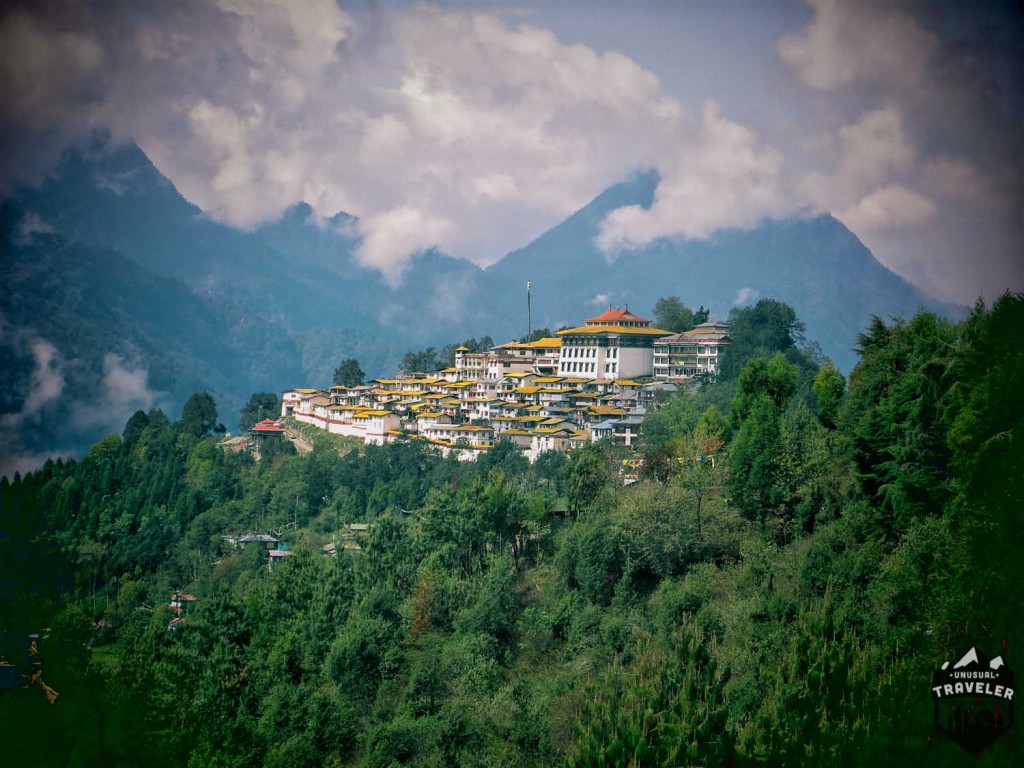 Tawang Monastery is still a functioning monastery with around 450 monks; you can walk around freely and hang out with some of the local monks.  I was even invited to be their English teacher for a day, invited to eat with all the monks and had countless cups of tea with them. A perfect day! 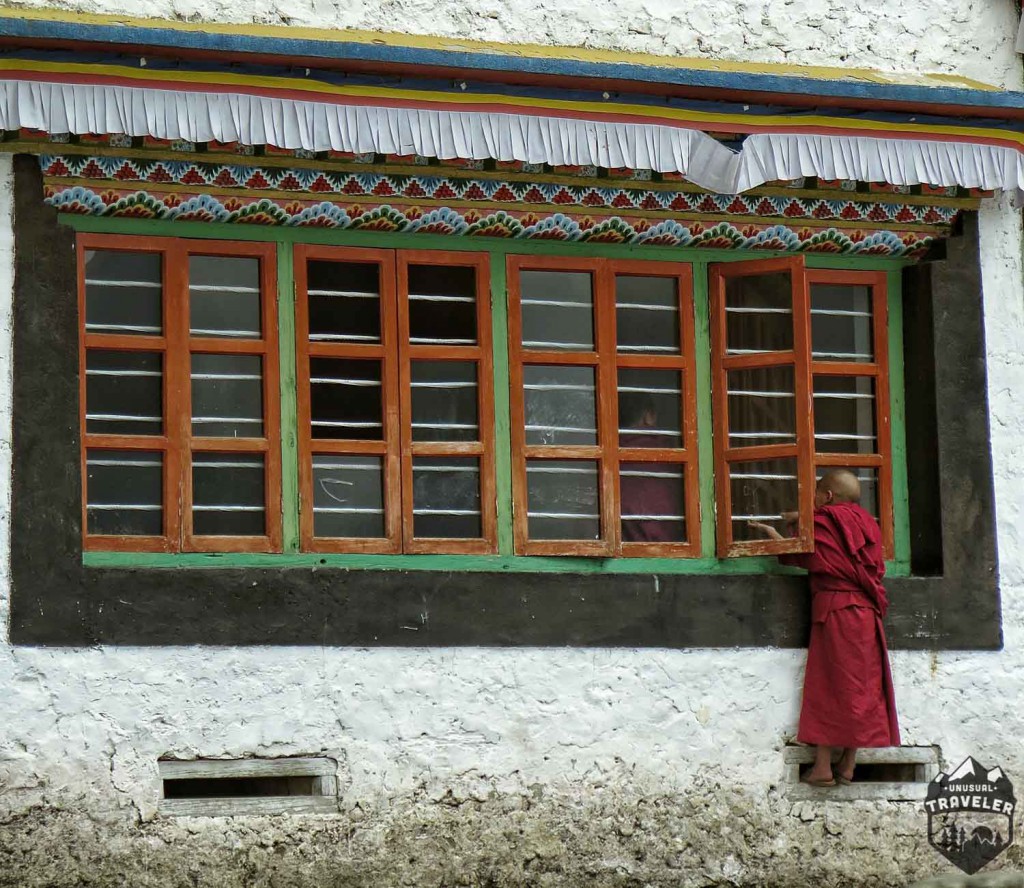 A young monk is having a sneak peek into a class.

Tawang is the birthplace of the 6th Dali Lama, but, unfortunately, it was closed due to renovation when I was there so I couldn’t visit.

After three days it was time to leave this amazing place, I would have loved to stay longer, but I was starting to run out of time on my visa, and everyone that has ever visited India knows what a hassle it is to obtain a visa extension.  I also had a few places I wished to visit in Arunachal Pradesh.

One of those places is Ziro Valley with the Apatani people famous for their face tattoos and huge nose rings but to reach Ziro I was required to pass through Itanagar, the most depressing city in all of India.

Upon my arrival, there was a government strike so and no transport to Ziro for four days.  Since my Indian visa was running out, I had to leave for Assam to catch my train back to Delhi.
Missing out on Ziro valley is one of my biggest regrets since I’ve been travelling.

I will definitely be heading back to Arunachal Pradesh, not only to visit Ziro but more of the northern part, the part that Tibetan monks call Shangrila, I would also love to spend a lot more time in Tawang and the surrounding areas. 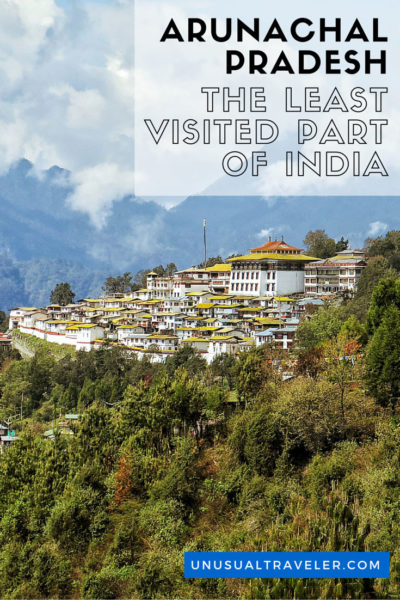