Constantine (The Amazing City Of Bridges In Algeria)

The City of Constantine in the northeast part of Algeria which is not to be mistaken for the Hollywood blockbuster movie with the same name from 2005 wit Keanu Reeves as the main character.

Is one of the most picturesque cities in Northern Africa where it´s located on both sides of an almost 200meter gorge that splits the city in two. 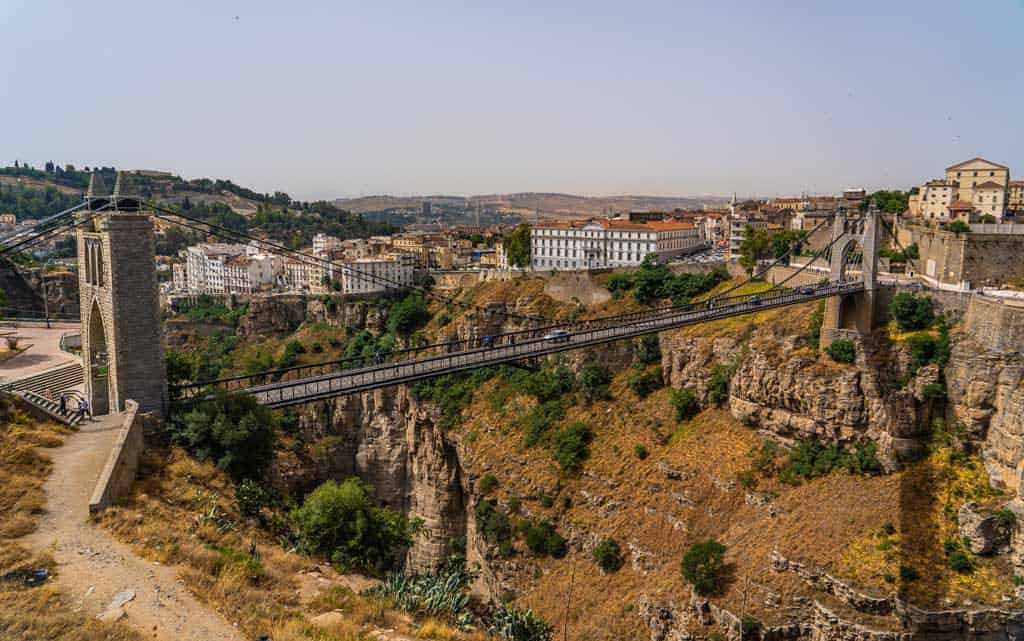 The Gantaret El Hibal bridge, once the highest bridge in the world when it was built in 1912.

Constantine was in 2018 Named one the Off-the-radar cities to explore in 2018 by the USATODAY magazine.

Constantine is one of the oldest cities in all of Africa having a rich history dating all the way back to 600 BC. It was the capital city of the Berber Kingdom of Numidia under the name of Citra and then later became a Roman City in 46 BC.

But it was not before in the year 313AD that Citra was renamed into Constantine after the Roman Emperor Constantine the Great. There are only some small remains Roman Ruins left inside Constantine, but less than 2hours away and an easy day trip is the Roman Ruins of Djemila, a UNESCO World Heritage Site, that Lonely Planet has described as one of the world’s great archaeological sites. ” 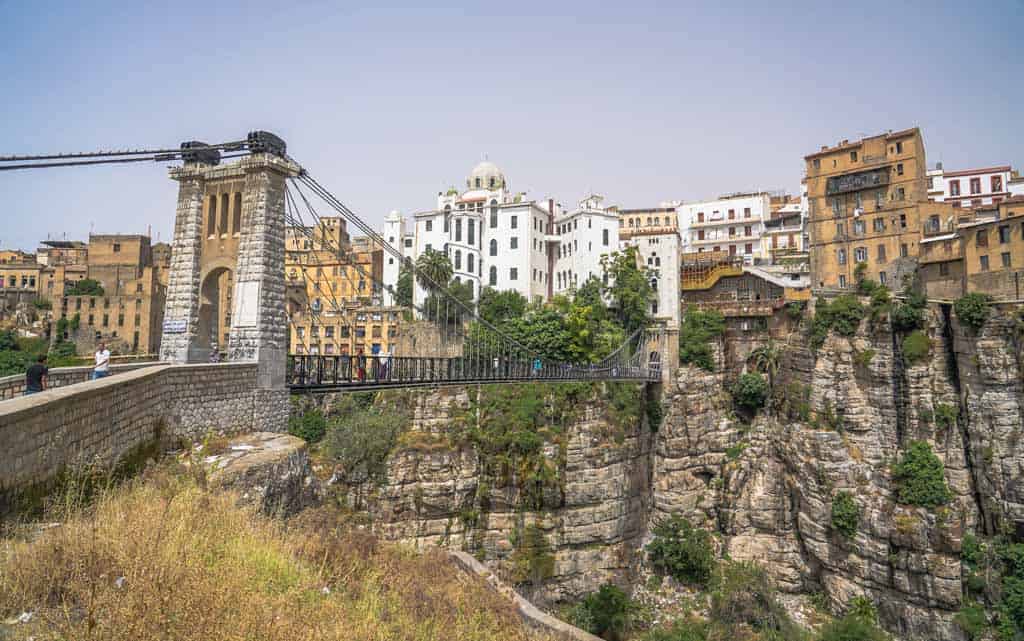 Mellah-Slimane walking bridge, there´s an elevator on the other end.

Mellah-Slimane to the left and you can spot the El Kantara Bridge on the right.

Today is Constantine famous for the geography of the city, that makes the city one of a kind in the world and a must-visit if you’re in Algeria, with its eight bridges that connect the two parts of the city across the 2KM/1.2mile long Rhummel Gorge with a breathtaking height of 120m/394 feet on average, and the highest point being 175/574 meters tall cliffs hat splits the city into two. 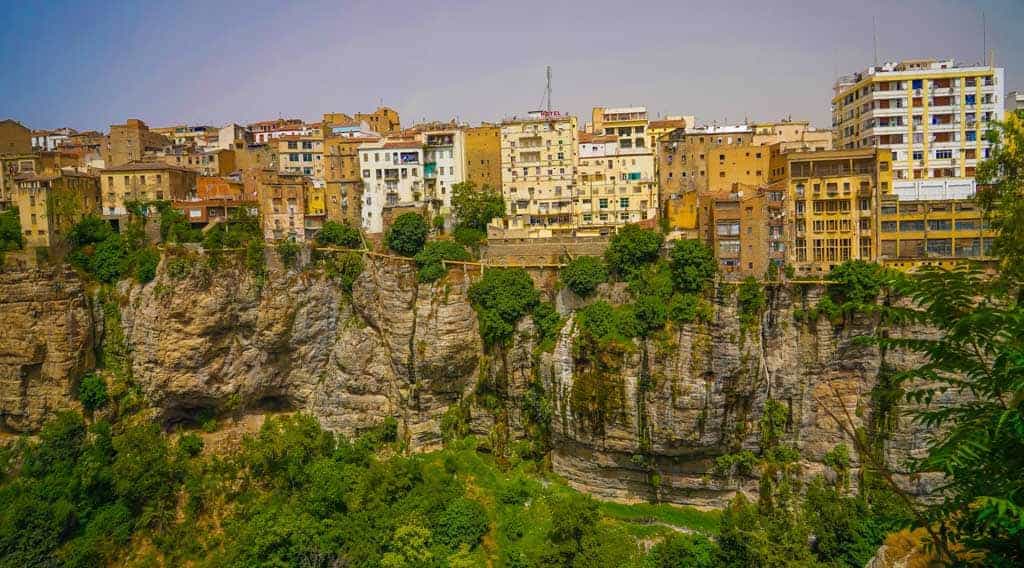 Local hotels and buildings built on all along the cliffside

The best thing to do in Constantine is just to explore the city by foot, even tho it’s Algeria’s 3rd biggest city after Algiers and Oran, is Constantine compact enough to walk around and explore by foot. But I did clock in 32 000 steps on my watch by the time I got back to my hotel in the afternoon.

The most famous bridge in the city is the Gantaret El Hibal bridge also called the Sidi M’Cid Bridge; this bridge was opened to traffic back in April 1912. And it was for 17 years until 1929 the highest bridge in the world at 175m/574 feet.

The Gantaret El Hibal bridge, once the highest bridge in the world when it was built in 1912

The eastern side of the Gantaret El Hibal bridge leads up to the Monument aux Morts or better known as the Monument to the dead of Constantine in English, a monument built to remember the more than the 800 soldiers from Constantine that died while fighting during World War 1.

The monument dates back to 1930 (construction started in 1918). The gate’s design is inspired by the Trajan’s Arch at the famous Timgad Roman Ruins in Algeria. One of three Roman Ruins Unesco World Heritage sites in Algeria, the two others are Tipasa and Djemila. 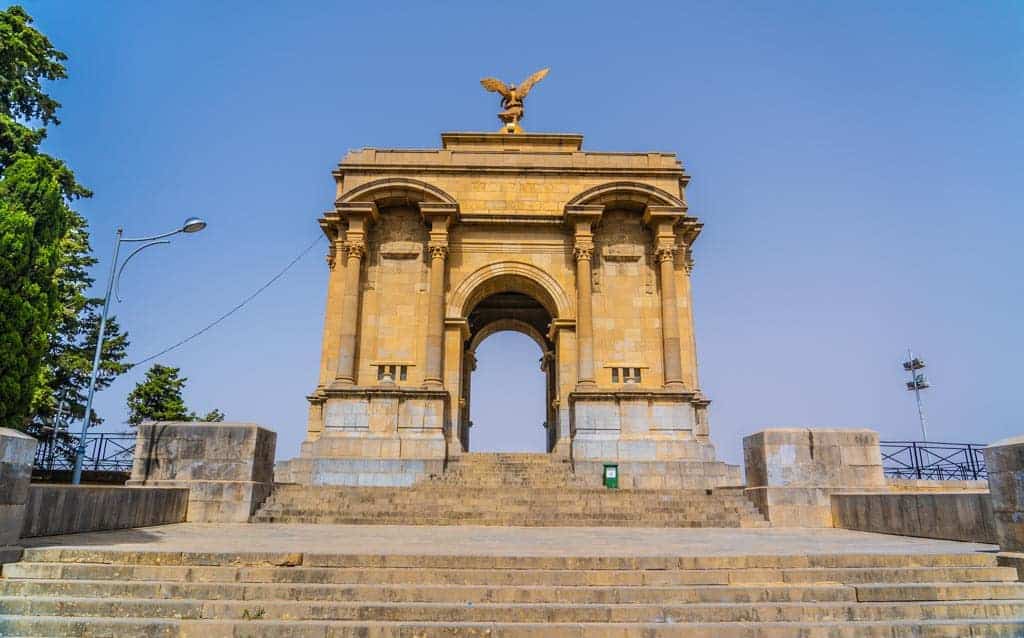 Monument Aux Morts is on the top of the hill overlooking the plateau below.

There´s a tremendous Panoramic view from the Monument Aux Morts over the plateau bellow Constantine; there are a few benches around where local couples like the have a romantic time together. 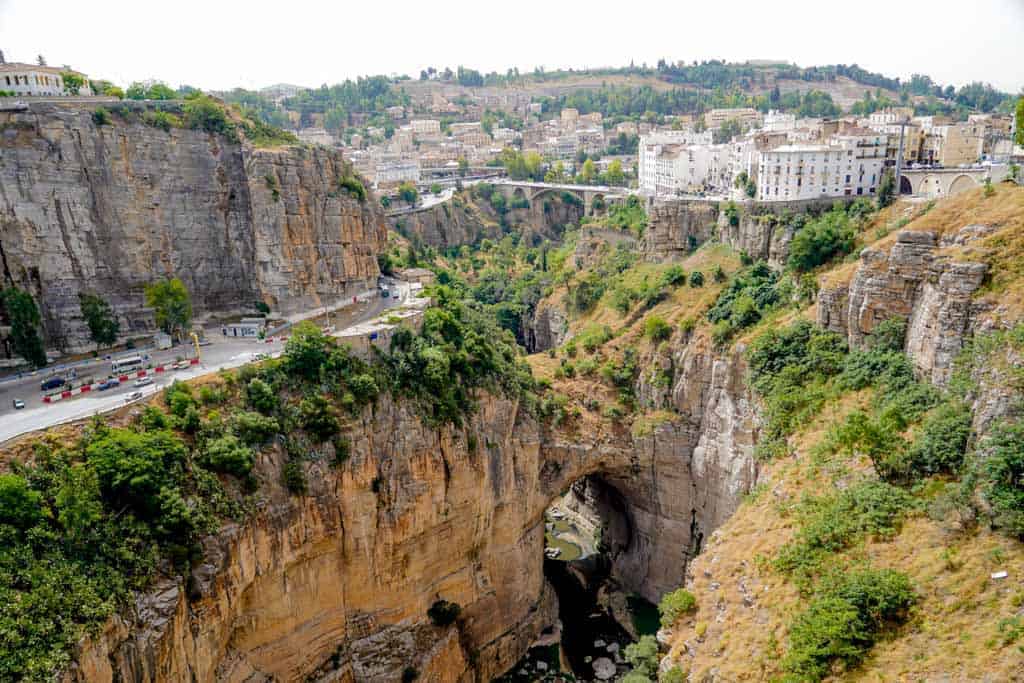 A natural bridge across the gorge with the El Kantara Bridge in the background. 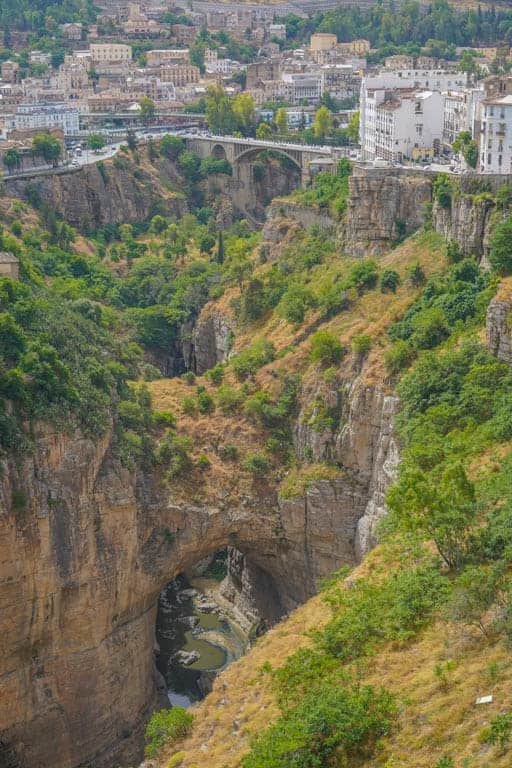 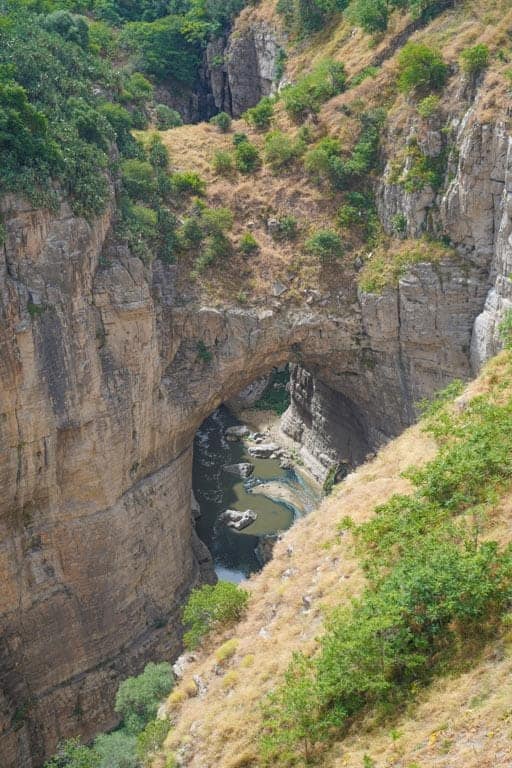 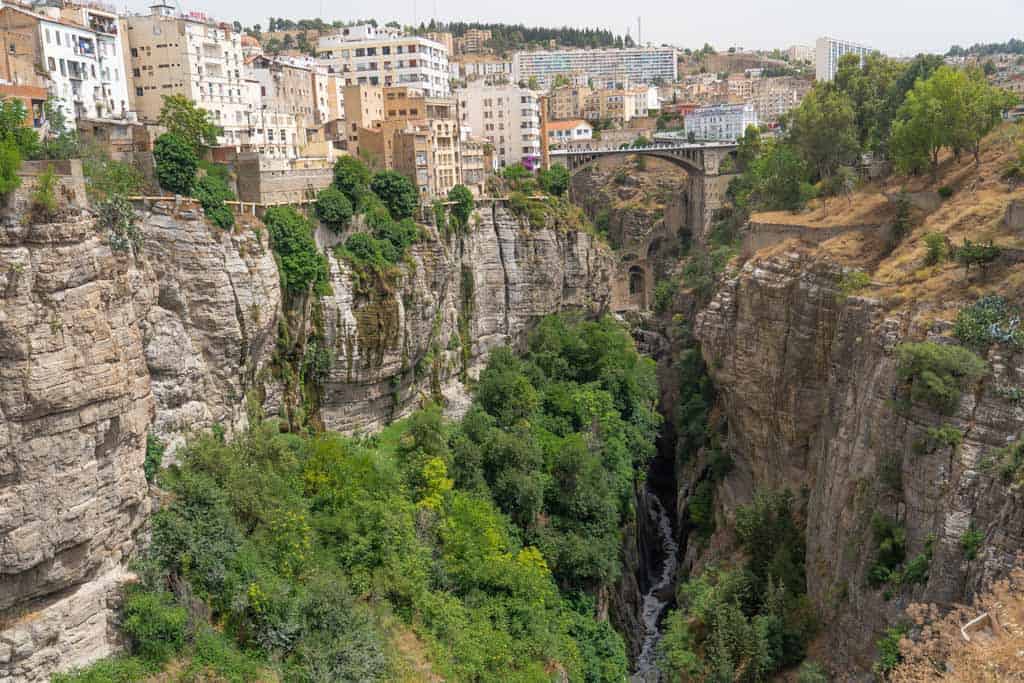 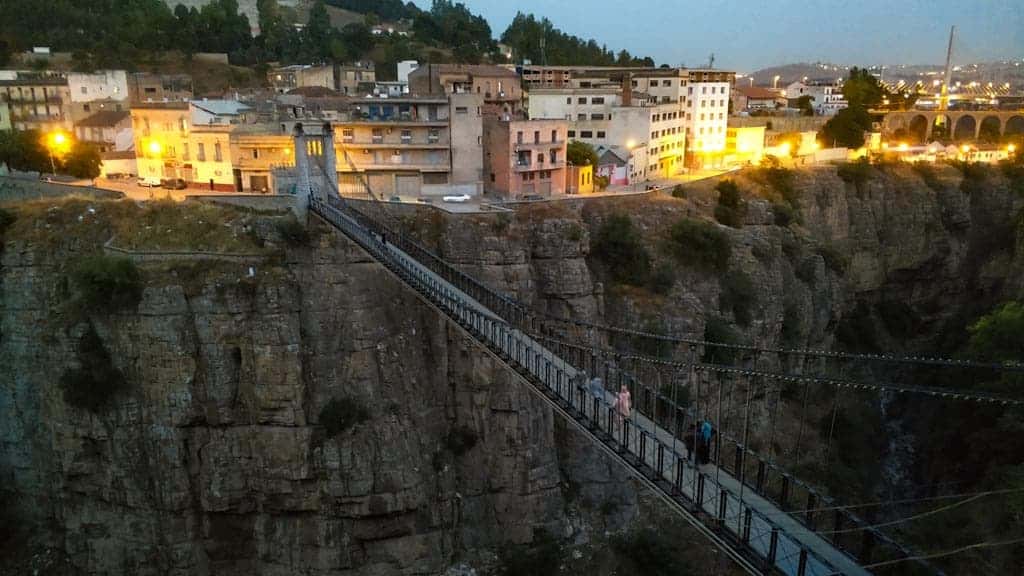 Mellah-Slimane Footbridge built between 1917 and 1925. 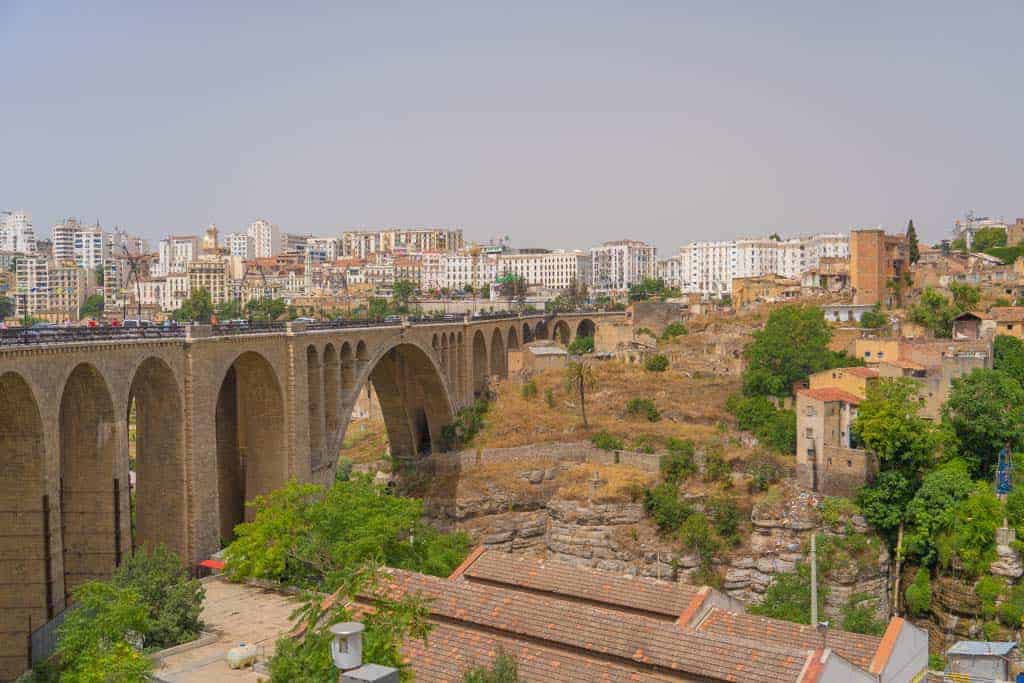 Salah Bey Bridge the newest bridge in Constantine. Opened in 2014 and is 750m long and 245m tall.

Except for the bridges so are the Kasbah traditional neighbourhood and market worth a visit, together with the old French Theater that’s still in its original shape, and it’s a great example of French architecture. 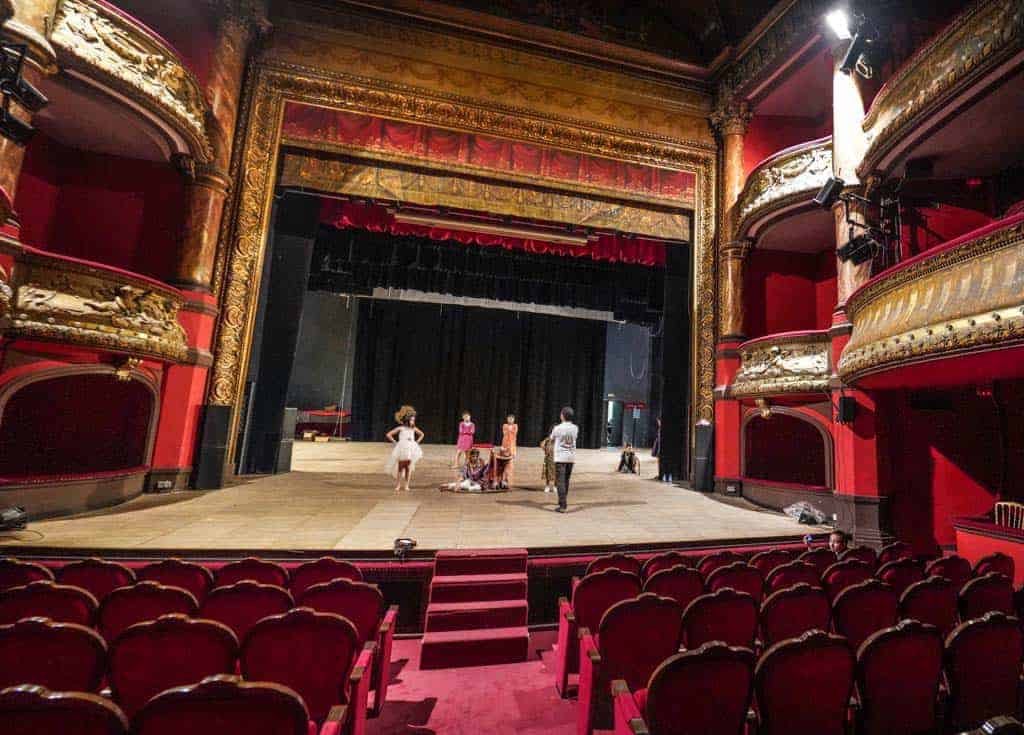 Inside the old French Theater.

There are a few famous buildings to see around the city like Charles de Gaulle old residence (closed for public), the parliament and there is even an old Jewish synagogue in the town.
And just like Algiers and Oran so is there´s also an old cable car across the gorge in the town, but it was closed down during my visit. 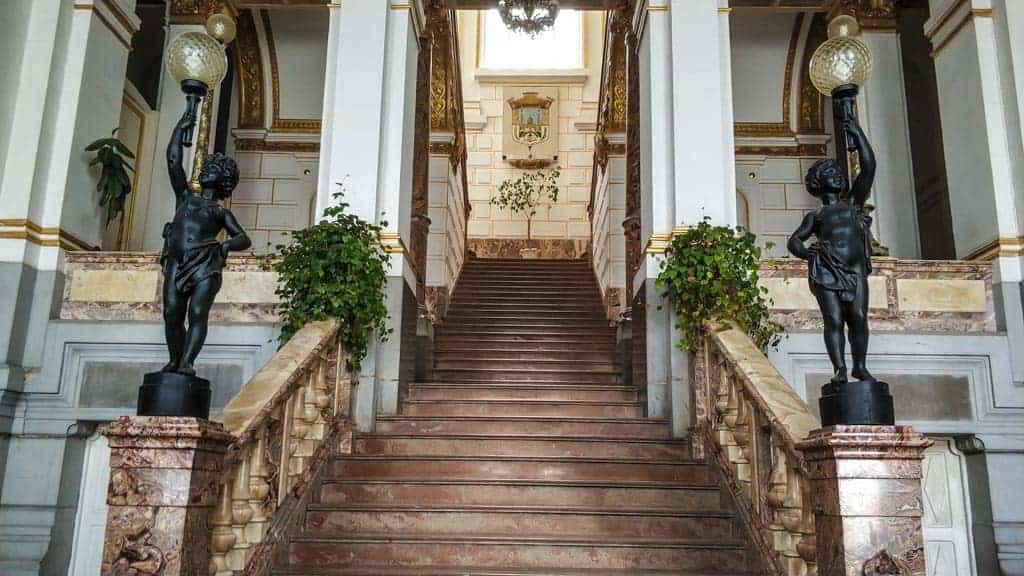 Inside one of the fancy old French Mansions. 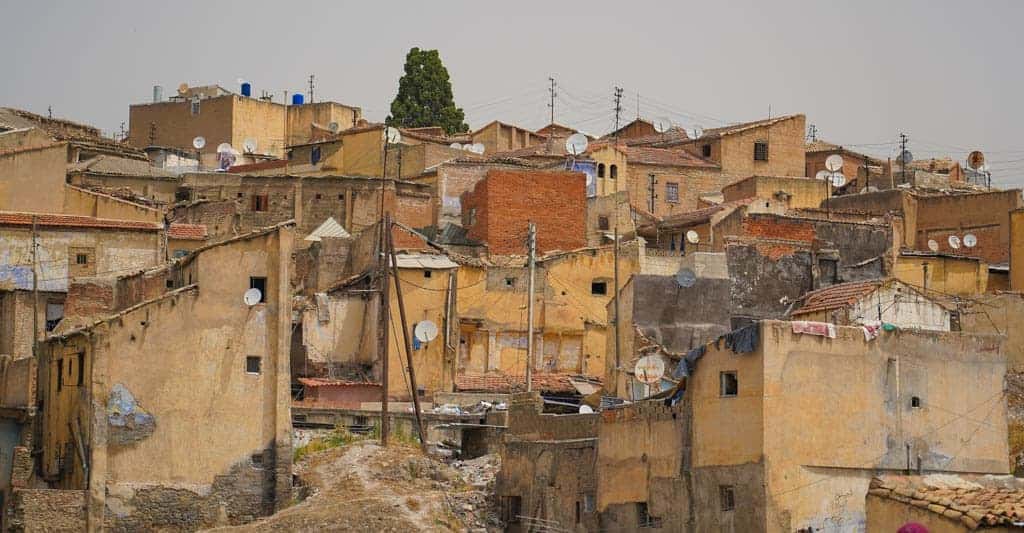 The old traditional neighbourhood Constantine also called the Kasbah. It seems like everyone got satellite tv now. 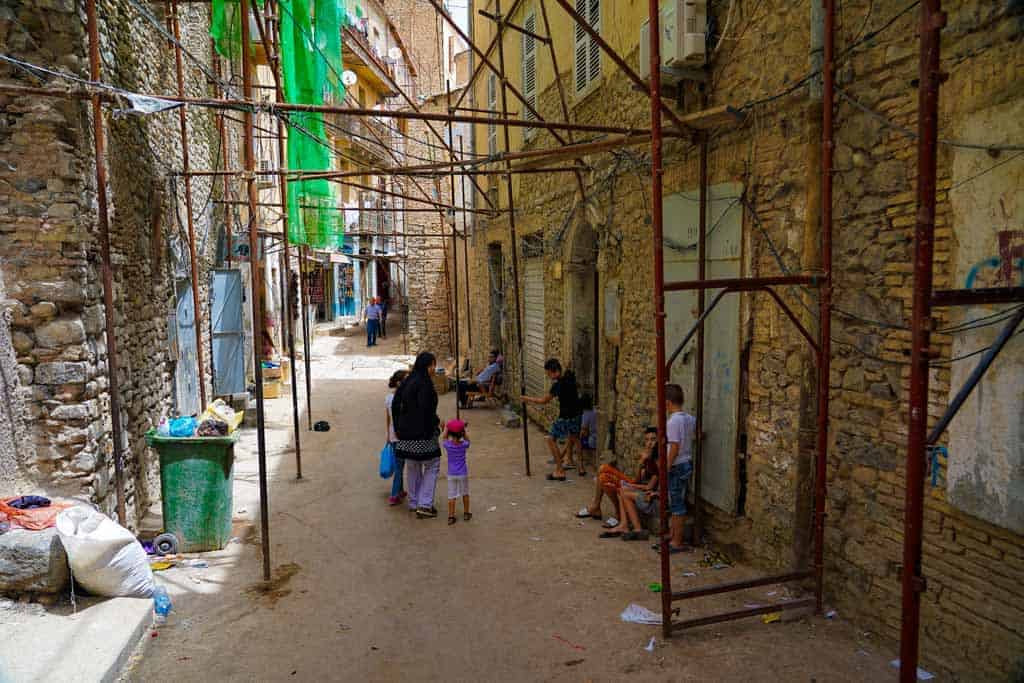 Walking through the old traditional neighbourhoods, A lot of restoration going on.

The old train station (still running ) is another example of the former French colonial history that Algeria was part of. On the eastern outskirts of the town is the colossal Mosque located, also worth a stop, it´s possible to walk there, but it´s much easier just to take a taxi for about 1USD.

The Emir Abdelkader Mosque was built in 1994 and one of the biggest in the country, its one of the world´s biggest mosque where it has a capacity of 15 000 worshipers at the same time, the 107meter tall minarets are visible to see from most of the city. It’s also Algeria’s first modern Islamic university. 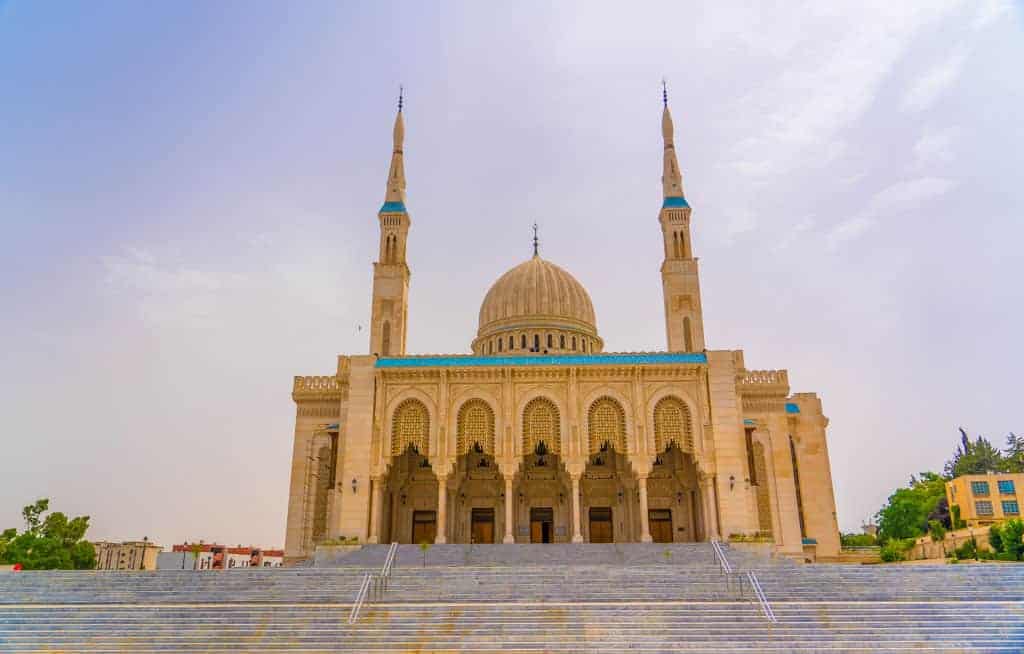 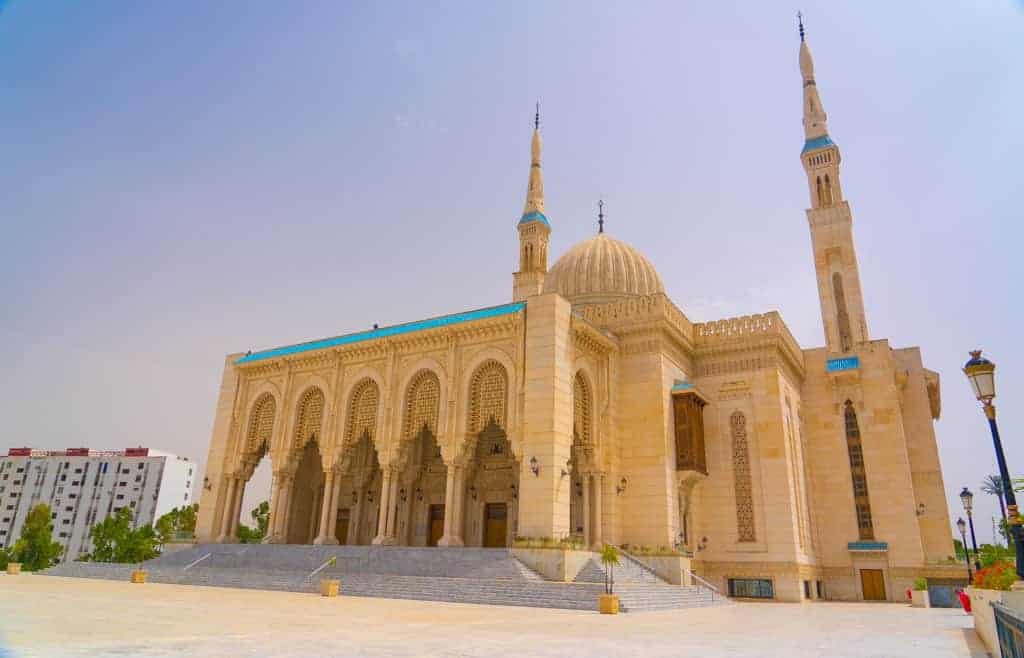 How to Travel to Constantine in Algeria: There are busses to and from Algiers every half hour throughout the day, the trip between the two cities takes around 5 hours.

Constantine is connected to Algiers and Annaba by train.
There are three trains between Algiers and Constantine a day, two daytime trains  (one direct at 07:25, one at 12:30 with a change at Setif), plus a sleeper train at 21:30.
And back to Algiers at 06.40 and night train at 22.49 arriving in the capital at 06.26
Price is about 8 Euro each way.

There´s a night rain from Constantine to Annaba leaving the station at 02.50 AM.
Train tickets can be booked online.
There is no train or bus connection to Tunisia, but there are shared taxis.

If you want to visit The Roman Ruins Djemila so is there busses every hour to Setif takes 2 hours.

Taxi from the airport to the city centre will cost 200 to 300 dinars/2-3 Euro.
There´s also an airport shuttle bus for 30 Dinars.

To get around the city is the tramway the most comfortable way, with its 10stations along the 8.1Km long tracks.
Its currently work undergoing to connect the tramway with the airport.

Hotels in Constantine: There are not many accommodation options in Constantine that you can book in advance online. I did stay at the IBIS Constantine, which is located right night to the main city square. It´s also a bar here serving cold beer, one of few in the city.

Safety: Like any anywhere in Algeria so did I feel 100% safe in Constantine, there were no issues walking around the city on my own, also after dark. Everyone was super friendly and welcoming. I really enjoyed my visit to Constantine. 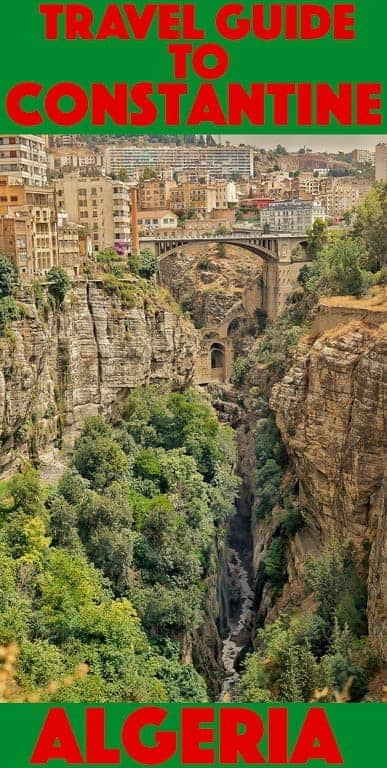 Everything You Need To Know about Constantine, the 3rd biggest city in Algeria, the biggest country in Africa. 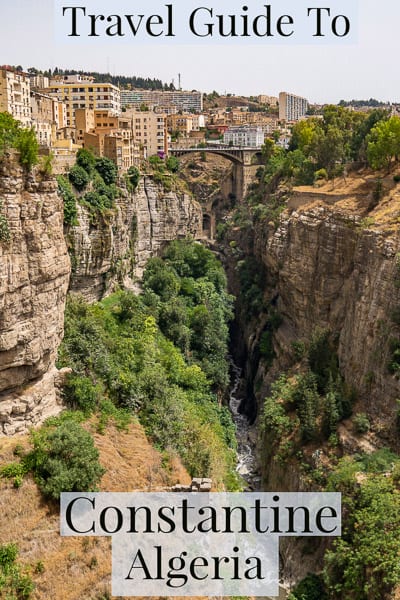 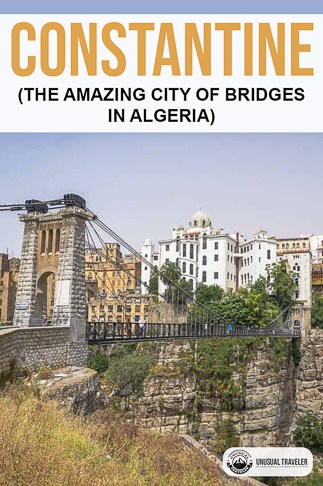 […] bridge straddles a half-kilometre deep gorge that cuts through the city of Constantine. The city is understandably famous for its bridges, as well as buildings built right up to the […]

Thanks for the description of the city. It gives a clear picture of the antique and beautiful Constantine. You are welcome anytime. I suggest that you visit other Algerian cities like Oran, Annaba, Tébessa, Bejaïa, Biskra and Tammanrasset. Regards

Very nice presentation of the city!

Hello, I am addressing the article's author, please I suggest you revise the date of construction of Emir Abd el Kader mosque. Hope you enjoyed your trip in Constantine.

Hello. what´s the correct date? And ill update it

5 destinations around Oran you must see! | Time Travel Bee

[…] have to admit, that area of Oran and the city itself were more interesting for me than Algiers or Constantine. That’s why I highly recommend to choose some spots from this article and get to see […]