Few to no other place in the world has a more exotic feel to its name than what French Polynesia has. A tiny island nation located halfway between the USA and Australia right in the middle of the South Pacific Ocean.

Often used as a romantic honeymoon destination for some, and an underwater paradise for scuba divers around the world.

French Polynesia has something to offer to everyone. 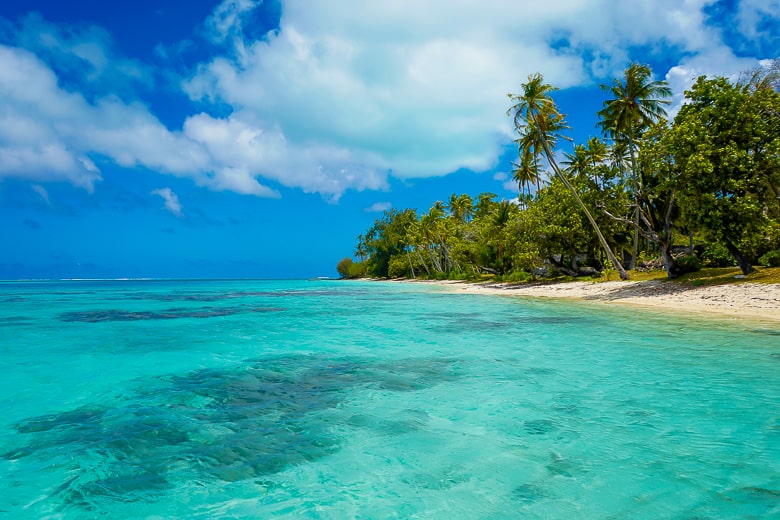 French Polynesia is home to what might be the clearest water in the world.

But it should be to no one’s surprise travelling around here will take a bit of planning, especially since the only travel around is by flights, slow going ferries or hitchhiking one of the thousands of private owned sailboats the cruise around the crystal clear waters. 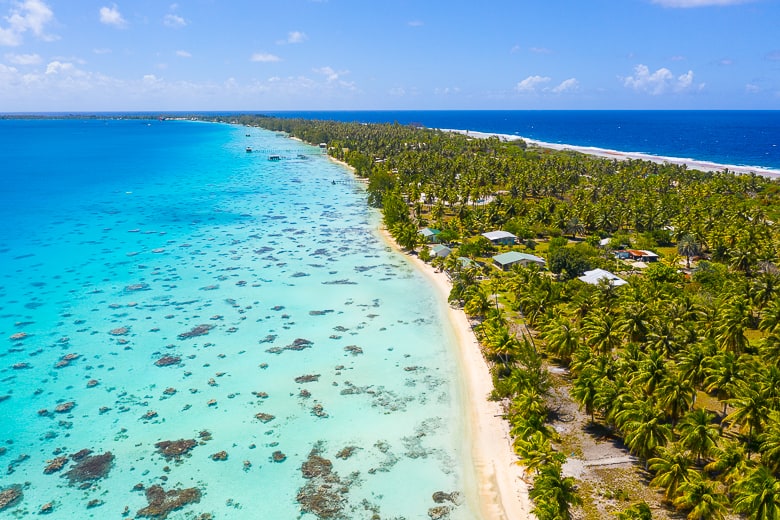 The paradise Atoll of Fakarava

I visited French Polynesia for nearly a month by the end of 2018. During my trip did I visit Tahiti – Bora Bora – Moorea – Tahiti – Fakarava – Tahiti, while this is only a fraction of the island, so did It give me some amazing experiences and some hard-learned lessons, that there´s nowhere else in the world quite like French Polynesia.

Visa is also not needed for Citizens of all countries in Latin America, Australia, New Zealand, plus Japan, Taiwan, Singapore, Malaysia and South Korea do not need a visa for up to 3 months stay. 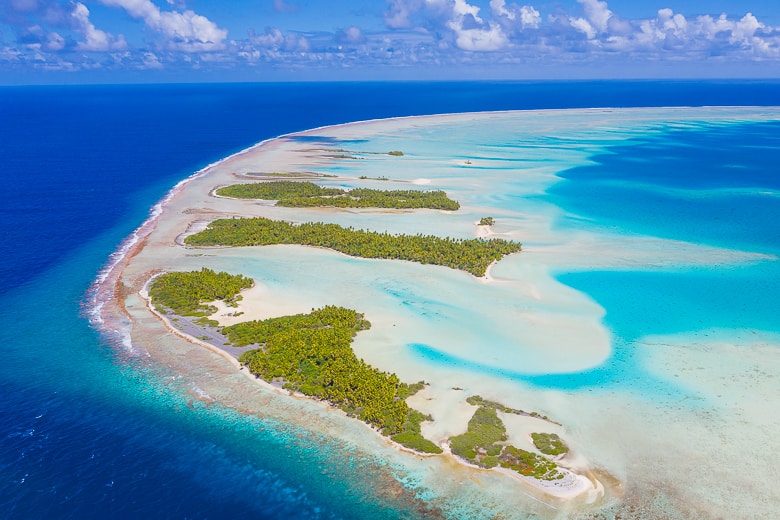 Citizens from countries not available for visa on arrival will have to apply for a visa to French Polynesia from a French Embassy or Consulate in advance.
Normal fee is 9 Euro.
A return ticket is required for everyone; you might get asked for it upon arrival at immigration.

Getting To French Polynesia?

Fa’a’ā International Airport (PPT) is served by no more than 9 Airlines, all which offers international flight.

From Europe are flights with Air France through LAX Los Angeles or with Qatar Airways that has a codeshare agreement with Air New Zealand through Auckland the two most accessible options.

If you are stopping by New Zealand on your way to French Polynesia, be sure to check out this post about the best campsites in New Zealand.

How To Travel Around French Polynesia? 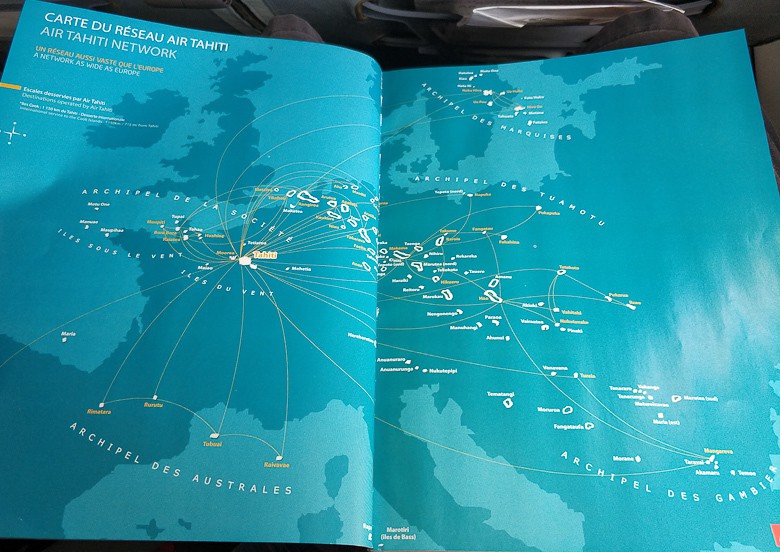 Flight Map for Air Tahiti, showing the distances and size of French Polynesia compared to Europe.

French Polynesia is made up of five archipelagos, all more different, than the other.

There are only about 280,000 lucky islanders living on 67 inhabited islands and atolls. With over 70% of the population concentrated on the big island of Tahiti.

It´s important to know that while there are local flights between the islands inside each Archipelago. So will you have to transit through Tahiti when travelling from one archipelago to another.
Be aware that you often will you have to stay a night in Tahiti before taking your onward flight to the next Archipelago early next morning. Flights to smaller islands and atolls are often booked out months in advance.

Which Island To Visit In French Polynesia.

Deciding upon which island/atoll you want to visit during your visit to French Polynesia, highly depend on your budget, flight schedule and what activities you want to do during your holiday.

Best For Resort Holiday: Bora Bora and Moorea
Best For Beach Holiday: Tikehau, Huahine and Moorea. All the good beaches on Bora Bora is located on private resorts.
Best For Scuba Diving: Fakarava, Nuku Hiva, only proper wreck diving in French Polynesia are around Raìatea
Best For Hiking: Tahiti, Bora Bora & the Marquesas islands
Best For Whale Watching: Moorea, Tahiti and Rurutu, from early August to late October.
Best For Overall Activities: Moorea got most to offer, but it´s also the most touristy island. 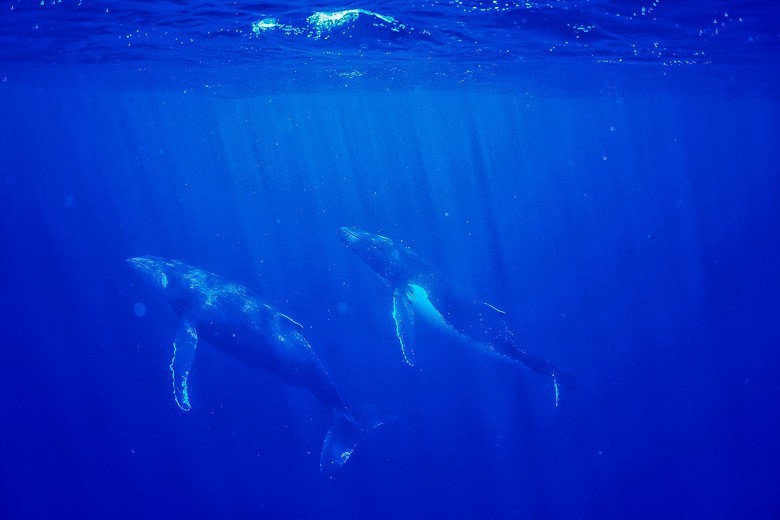 The local currency in French Polynesia is CFP; Euro is widely accepted for payment in hotels.
Western bank cards, Visa and MasterCard, are accepted “everywhere”.  Personally, did I pay everything on this trip, like hotels, diving etc. with my bankcards with a few exceptions with hard cash in supermarkets.

Tho it´s possible to cut expenses with bringing a tent and go camping plus cook for yourself when staying in guesthouses, should you still budget 100 – 150 Euro a day.

Internet in French Polynesia was much slower and limited than I would expect from a country like this. While all guesthouses and most restaurants had free wifi was the speed very slow, sometimes ridiculous slow.

If you want to buy a local sim card so is Vodaphone your option, they sell tourist sim card. 42EURO! /5000 CF for 2GB Data, 30min local calls and 30min international calls.
But be aware that 4G Connection is ONLY Available in Tahiti, Moorea and Bora Bora.

On other islands and atolls etc. like Fakarava is it only EDGE connection if you are lucky, most of the time you got no connection at all.

But after all, why would you spend all your time online when you are in one of the most beautiful places on earth. 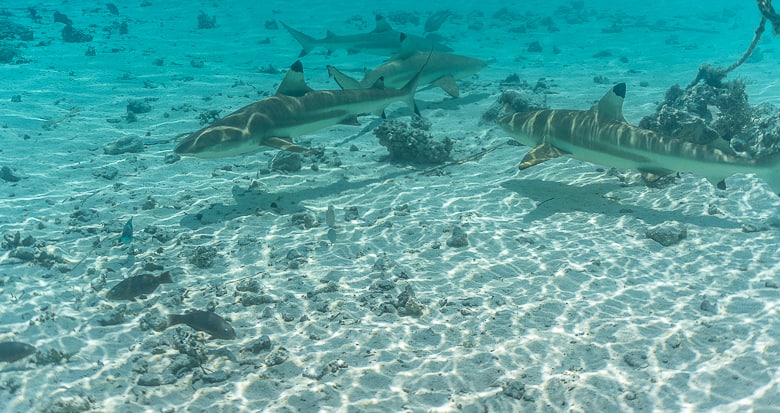 You will get pretty close to reef sharks in Fakarava

French Polynesia is one of the safest places in the world, generally speaking, but petty crime, such as pickpocketing and purse snatching occurs. I did hear of a lot of cases of cars and tent´s that had been broken into on Moorea.

Although there is no malaria in this part of the words, but there are occasional dengue-fever and chikungunya outbreaks spread by mosquitoes. All island I visited had tons of mosquitoes in the evenings.

Dive insurance is highly recommended if you decide to go scuba diving. By law are you forbidden to dive deeper than 27 meters in French Polynesia.

Reef Sharks are normally harmless, but They can become dangerous in the presence of food, and they tend to be more aggressive if encountered in open water rather than on the reef. It´s not unheard of reef sharks biting people that wading through shallow water.

Who doesn’t dream of sipping on a cocktail while watching a sunset or having a local ice cold heer, an icy, golden Hinano lager, “the beer of Tahiti.” on some of the best beaches in the world? 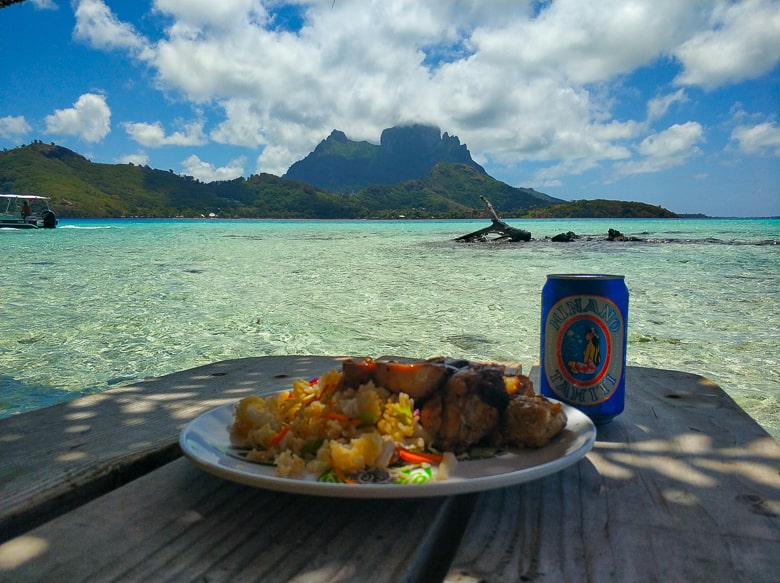 I having an ice-cold local beer during lunch in Bora Bora.

French Polynesia produce everything from Rum, Beer and to everyone’s surprise, even it´s own Wine, from the only coral soil growing grapes in the world.

Most people will think of overwater Luxus bungalows when planning a trip to French Polynesia, but that kind of accommodation is the only available on a few islands.
The most common style of accommodation here is small Pensions and guesthouses run by small local Tahitian families.
Most Pensions is not listed online, so often the only way to get a room is either by calls when you are here, or simply just showing up.

Be sure to pick up a free copy of Guide Des Hotels De Familles from the tourist information on either the airport or in Papeete town.
All pensions and guesthouses located around French Polynesia are listed in this book. 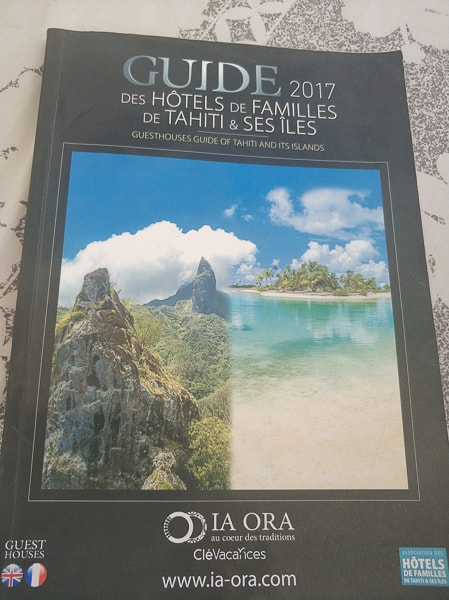 You will find both 110 and 220 volts, depending on the hotel or resort. But European standard 220V seemed to the most popular.

THINGS YOU SHOULD PACK!

Depends on which island you decide to visit, while in Tahiti & Moorea will be “everything” available, while on most (all) smaller island, will nothing but the most basic stuff be available.
Snorkelling Gear
Bug Spray
Sun Block
Flashlight/headlamp.

French is the only official language in French Polynesia, but Tahitian is also spoken by everyone in various dialects from a archipelago to the next archipelago.
When I researched for my trip to French Polynesia did most websites and blogs say they few people spoke English outside of Papeete and Bora Bora, but personally did I have absolutely no problem with just English during my travel to French Polynesia.

But it´s useful to know some basic Tahitian words. It will also put a smile on the local’s face when you try to pronounce the local words. 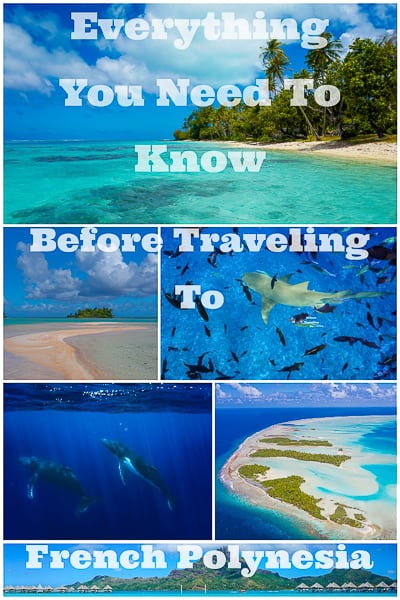 Few to no other place in the world has a more exotic feel to its name than what French Polynesia has. Here´s your complete travel guide to this island paradise. 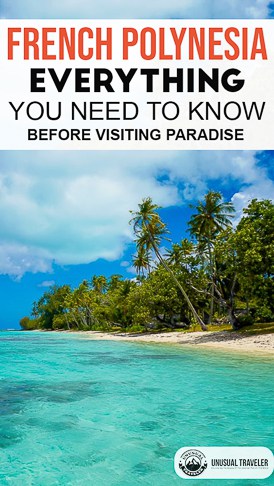 Everything you need to know about traveling to French Polynesia