The Ziggurat of Dur-Kurigalzu, A Historical Site In Iraq, That You Probably Have Never Heard Of.

About 30 kilometres west of Baghdad along the notorious highway towards Fallujah is the small settlement of Abu Ghraib which was made famous for all the wrong reason when the city prison earned international notoriety for the torture and abuses by members of the United States Army here in 2003 hit public. 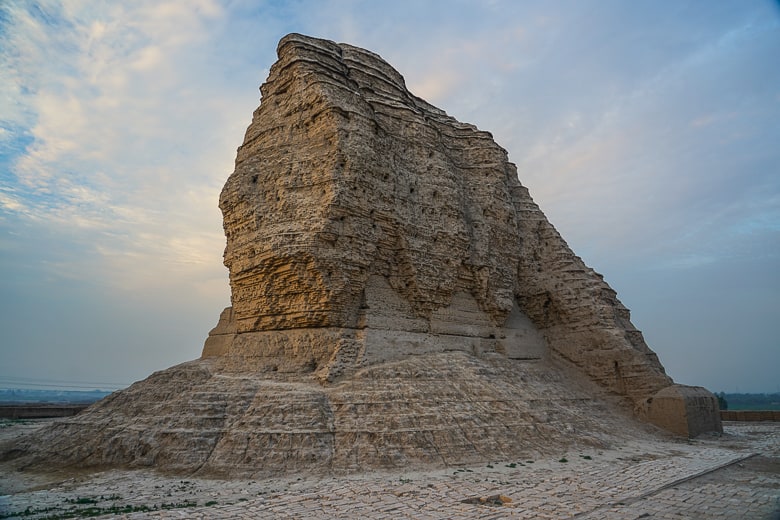 Just imagine how they built the Dur-Kurigalzu 3400 years ago. I took the photo during my trip to Iraq in February 2019.

While the prison made this small settlement famous for all the wrong reasons, so is one of the most historical sites in all of Iraq also located here.

The Ziggurat of Dur-Kurigalzu an enormous brick sandstone structure rising from the desert sands, a human-made structure constructed here for more than 3,400 years ago, by King Kurigalzu of the Kassite Dynasty.
Dur-Kurigalzu served as the capital of the Kassites Kingdom while they ruled over Babylon for almost four hundred years.

Dur-Kurigalzu with the platform that was constructed in the 1970s.

The Egyptians built their Pyramids, the Mayan´s in Latian America built Mayan temples, and the people of  Mesopotamia built Ziggurats.
Ziggurats were constructed by the people of Mesopotamia as a temple for the Gods. The Ziggurat was always the tallest building in the city, often viewable for miles away in the flat and barren landscape that´s around this part the world.

It´s believed that every major Mesopotamia city had a Ziggurat built.
The archaeologist has found evidence of around 25 Ziggurats was constructed in the area which´s now Iraq and Iran.
The oldest known Ziggurat is The Sialk Ziggurat outside Kashan, Iran, dating back to 3000BC, that makes it 5000 years old. That´s more 400 years older than the oldest Pyramid in Egypt, the Pyramid of Djoser.

The best-preserved Ziggurats is the Chogha Zanbil in south-west Iran and the Great Ziggurat of Ur in South East Iraq. The legendary Tower Of Babylon and the mysteries Hanging Gardens of Babylon is believed to have been Ziggurats. Dur-Kurigalzu is more than 3400 years old just before sunset in early February 2019.

The Ziggurat of Dur-Kurigalzu is said to have been as tall as 60m/197feet and with a 70meters square foundation when it was built around 1400 BC.
While only the core of Ziggurat remains these days, was there once a whole city built around Dur-Kurigalzu, but it was invaded and destroyed by the Elamites in the 12th century BC. 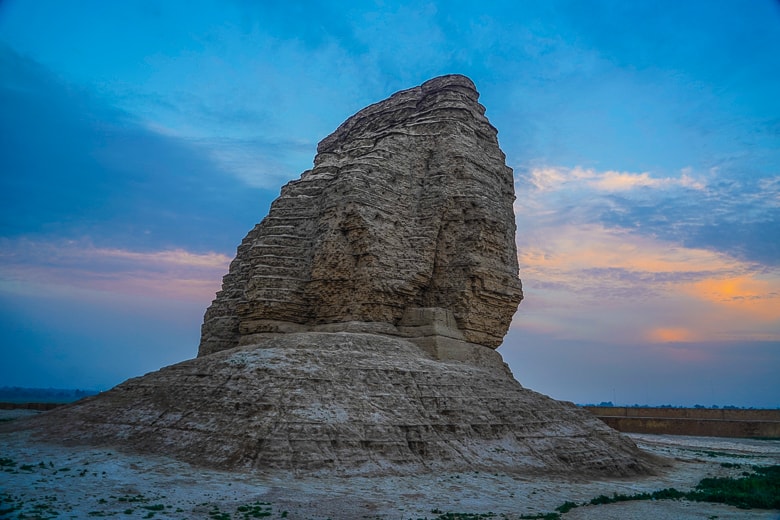 After the fall of Dur Kurigalzu city, did the Ziggurat work as a landmark for camel caravans on their way to Baghdad. The first excavations were done by Archaeologist here from 1942 to 1945.
The lower brick platform was built by Saddam Hussein’s government in the 1970s, to stop the highly eroded structure and to protect it from collapsing.
During the American Invasion of Iraq in 2003 where the museum looted, and a lot of historical artefacts found here have disappeared, this was a problem all over Iraq with the chaos that followed the U.S. military’s invasion of Iraq. 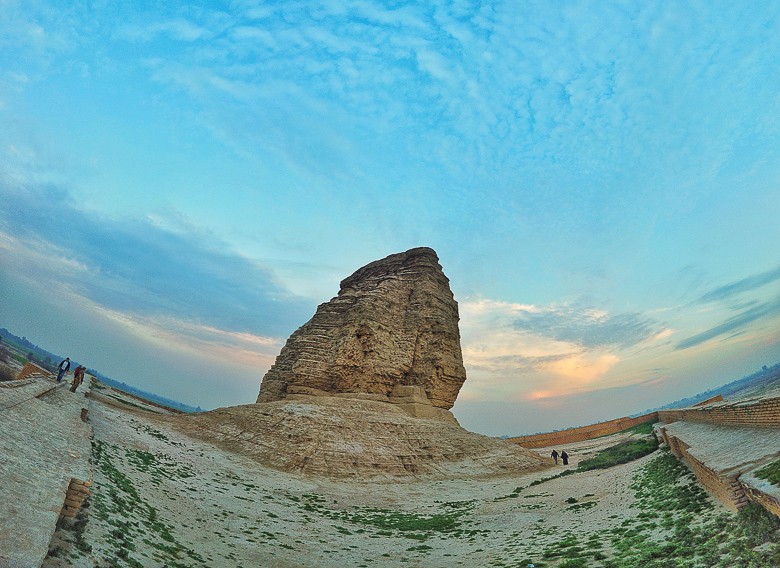 The Ziggurat of Dur-Kurigalzu photo taken with my DJI Osmo Pocket.

Before the war was the Ziggurat a favourite place for locals from Baghdad to have a picnic and enjoy their days off.

But like most other of the tourist infrastructure around Iraq which was in place before 2003, is now every hotel and restaurant in the area currently closed down and abounded, so the only way to visit The Ziggurat of Dur-Kurigalzu trip day trip from Baghdad.

The Guards which is now guarding the site also told that the Ziggurat suffered significant damage in 2003 when the site was unguarded for an extended period after the American invasion of Iraq.

While its only 30Km/18miles away from the Iraqi Capital, will a visit take almost half a day to visit the site due to the high security and military checkpoints that are in this area of Iraq.
Fallujah, which is located only 40Km/25Miles away, is still considered to be one of the most unsafe parts of the whole of Iraq. So it´s no surprise that to pass the checkpoints along the highway take time to pass through.

Another day trip from Baghdad that was popular the war was to visit the ruins of Ctesiphon, the last Persian capital located around 35km/22mile south-east of the Iraqi Capital. 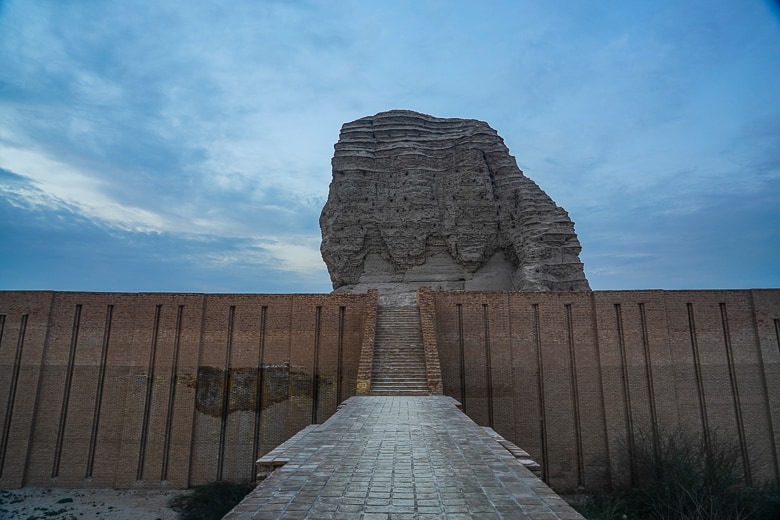 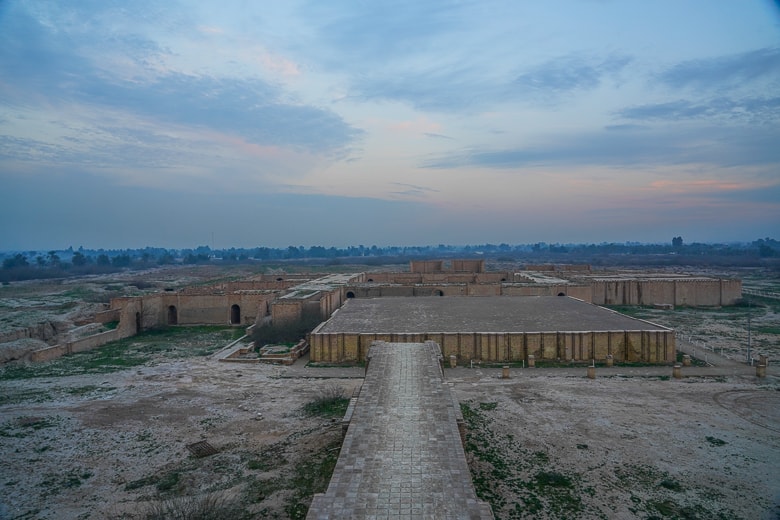 Other parts of Dur Kurigalzu that were rebuilt in the 1970s. It´s believed the town the once was here looked a bit like this.

PS. The Abu Ghraib Prison, which was located less than 15Km/9Miles from The Ziggurat of Dur-Kurigalzu is now, completely closed and abandoned and all the prisoners are now moved to other prisons around Iraq. 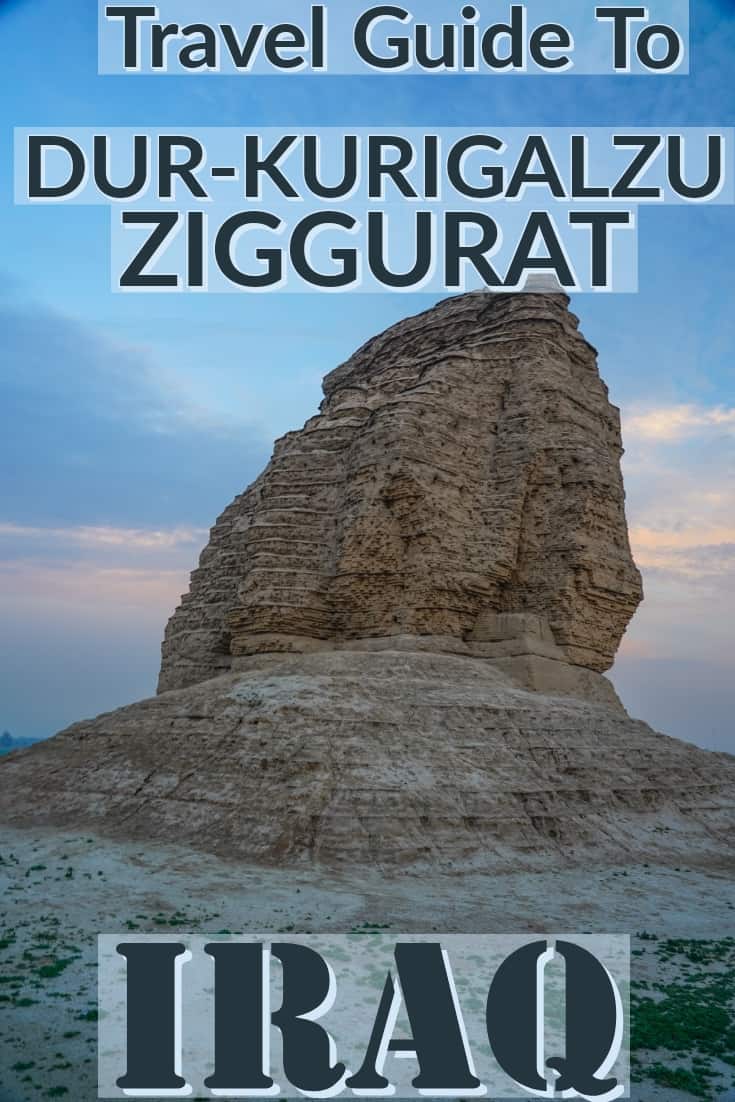 Travel Guide To the Ziggurat of Dur-Kurigalzu, and easy day trip from Baghdad, the capital of Iraq.

French Polynesia Everything You Need To Know Before Visiting Paradise
← Previous
Visiting The Ruins Of Ctesiphon, The Last Persian Capital In Iraq.
Next →
Click here to cancel reply.