Darvaza Gas Crater is better known as the Gates of Hell. Some people call it the Door To Hell, and it is one of the most remarkable natural sites in Turkmenistan.
The Gates of Hell are famous throughout Central Asia and the rest of the world as one of a kind. It also made a once in a lifetime camping spot.

And a place that eventually will disappear in the future. 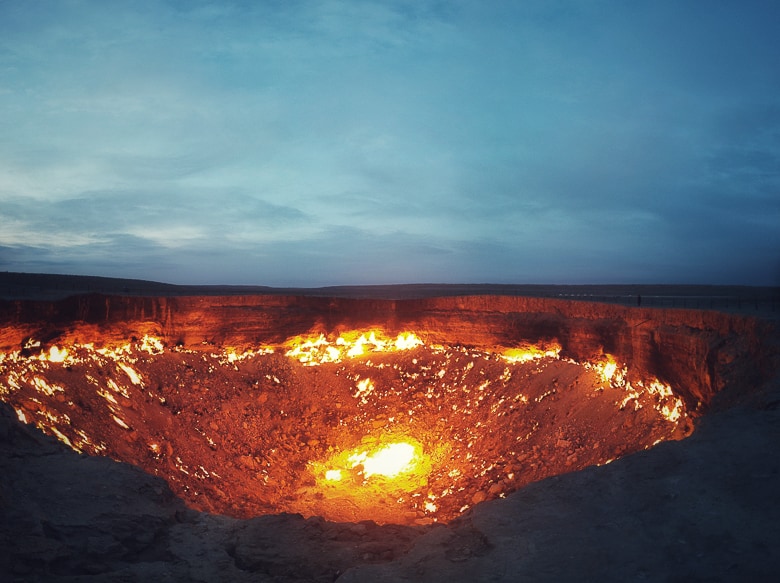 The Gate To Hell, just before sunset on a rainy day.

The Karakum Desert, which covers about 70%,(350,000 km²), of the area of Turkmenistan, is the home to the strange human-made natural site.
Rainfall in the Karakum desert is rare, with only 70 to 150 mm rain per year, with my luck did I get about half of the annual rain during my visit.
Turkmenistan is also home to some of the world´s most bizarre and strange rules, get the full list here. 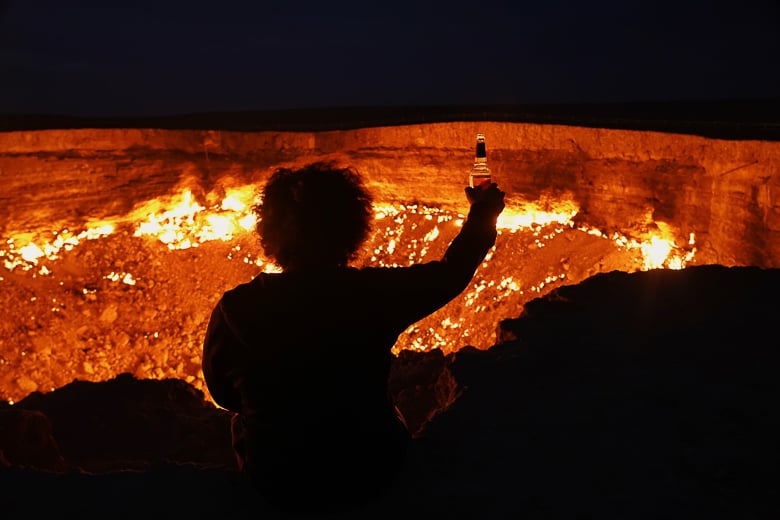 I just had to enjoy a cold beer at the gates to hell.

The Gates to hell was created by mistake in 1971 when a Soviet drilling rig accidentally punched into a massive underground natural gas cavern. This caused the ground to collapse and the entire drilling rig to fall in.

You can still see the old metal pipes sticking out of the ground in the crater.

Panoramic photo of the crater, notice the fence that was put up around the crater in September 2018.

After the crater was created, Geologists intentionally set it on fire to prevent the spread of methane gas. This was leaking from the hole, and it was the only way to stop a potential environmental catastrophe.

Geologists thought the crater would only burn for a few weeks; it has now been burning non-stop since 1971. That’s almost 50 years, and geologists still have no idea how much longer it will burn for. It might die out tomorrow, or it might burn for another 100 years, nobody knows. 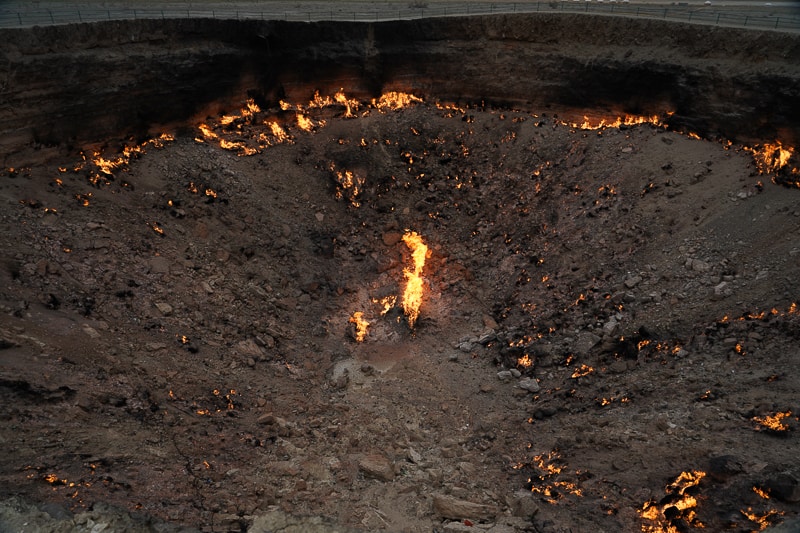 The centre of the crater during daylight.

The Turkmen government thought for a long time that Darvaza Gas Crater gave Turkmenistan a bad name and reputation abroad. Because of this, there had been serious talks about closing the crater completely.
Coincidentally, The Gates To Hell is now the most famous tourist site in all of Turkmenistan and the most common reason foreign tourist want to visit Turkmenistan. 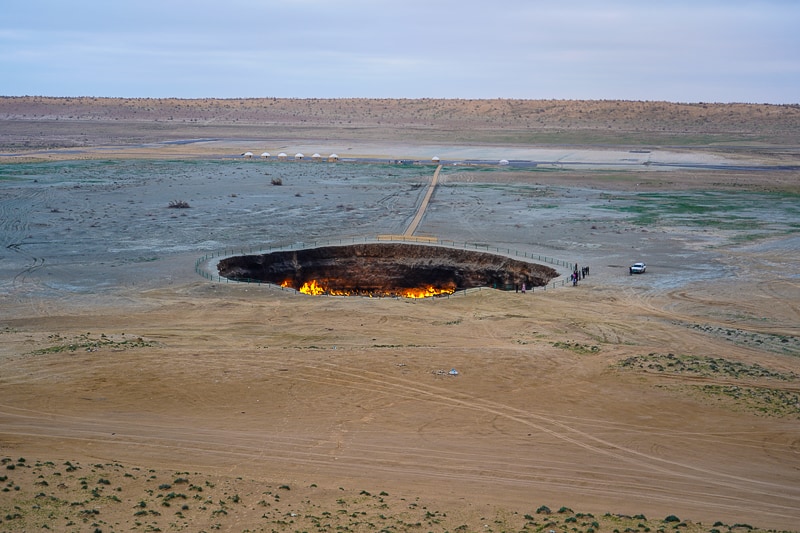 The Gates of hell, seen from one of the two hills overlooking Darvaza Gas Crater. You can see the yurts in the background.

The two hills overlooking the crater, notice the fence that was put up in September 2018, but it´s easy to climb over.

To help campers who visit the area a few traditional yurts have been built. There are also flushable western-style toilets. 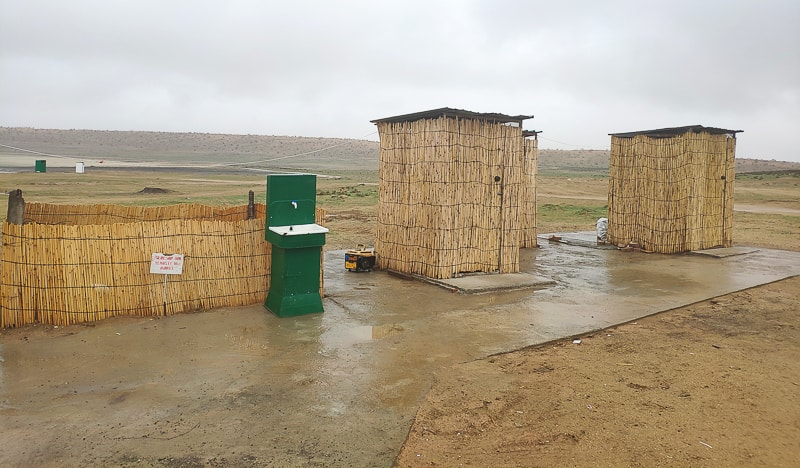 Two of the five toilets that have been put up. They are clean and well working!

Strangely enough,  you will never see a photo inside Turkmenistan promoting tourism to Darvaza Gas Crater. Not even the tours offered from my hotel in Ashgabat had any information about the Gates of Hell. Instead, the Turkmen travel industry tries to promote the UNESCO historical sites of Marv, Nisa and Kunya Urgench.

These historical sites were put on display on big billboards inside every hotel I stayed in during my visit to Turkmenistan. And yet, the biggest drawcard for Turkmenistan tourism, the Gates to hell, was nowhere to be seen.

The view during the daytime on a rainy day.

The Gates of hell, seen from one of the two hills overlooking Darvaza gas crater.

Just before arriving at the crater will you notice there is a new gas pumping station which was put up in 2010 after President Berdimuhamedow’s visited the crater. This limits the crater’s gas and uses of the natural gas fields in the area.

the crater after dark 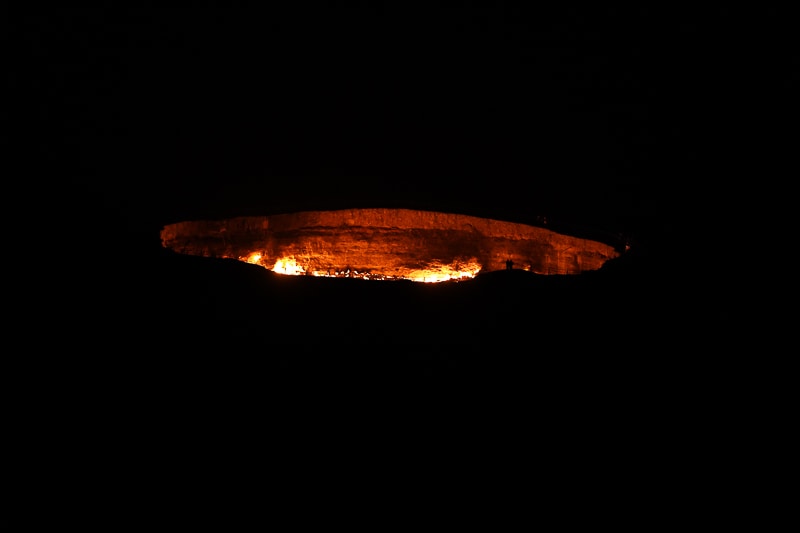 The Gates of hell seen from one of the hills during night.

The crater is impressive from the first second you arrive, even during the day time with the hot sun blazing. But it is when the sun goes down, and it’s pitch dark that the crater really deserves its famous name! The gates of hell/door to hell light up the place, and it can be seen miles around. 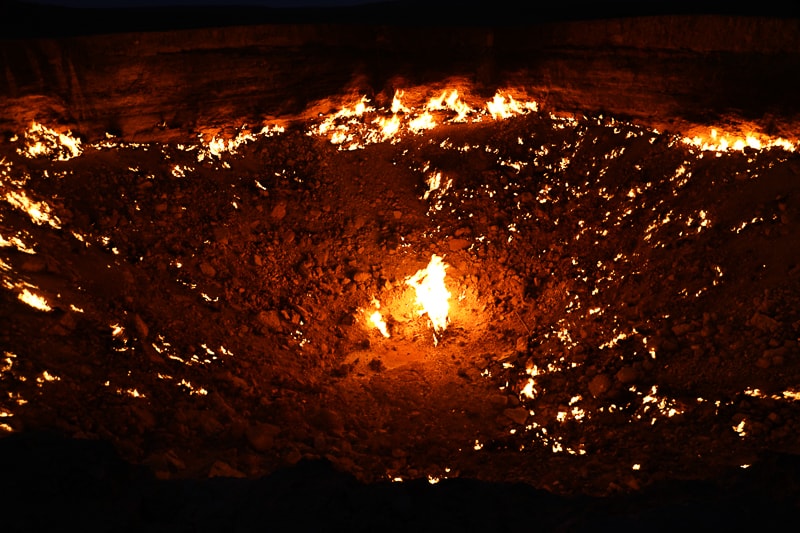 The crater after dark 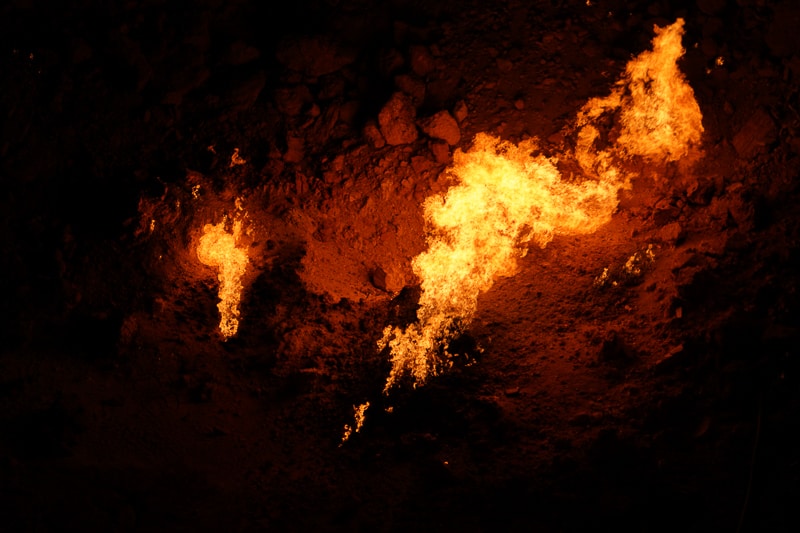 The centre of the crater, the biggest flame on the gates of hell

How To Visit Darvaza Gas Crater / The Gates of Hell.

Darvaza Gas Crater / The Gates of Hell is located about 270km/167miles north of Ashgabat the capital of Turkmenistan and 335km/208miles south of Dashoguz the biggest city in the north. It is the last city before going to neighbouring Uzbekistan where Khiva is the first obvious place to visit.

There is no direct transport directly to Darvaza Crater / The Gates of Hell. It’s good to note that all buses heading north from Ashgabat to Dashoguz (and back south) drives past Darvaza village. This is where you will have to turn off the highway and continue for another 7km/miles to the crater.

The road is muddy and dirty. It is possible to walk it, but it´s a long, hot and unpleasant walk. So it´s strongly recommended to get a  taxi from Darvaza Village. 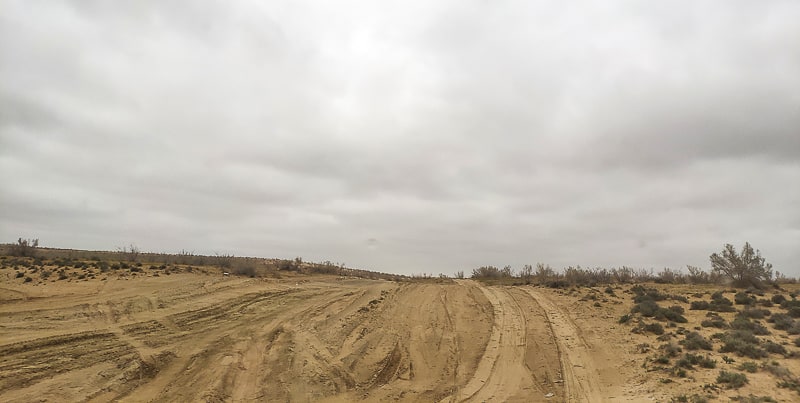 The Dirt road the last 7km.

How To Reach Darvaza Gas Crater / The Gates of Hell in Turkmenistan with public transport.

There are two buses a day from the new Ashgabat International Bus Station. It is located in the north of the city.  The buses head north, one at 7 AM at the cost of 20 Manat to Dashoguz. The other at 8 AM and cost 45 Manat to Konye-Urgench. This is one of the most famous historical sites is located there.

The drive from Ashgabat should take 3 and a half hour.

A shared taxi from Ashgabat to Dshoguz costs around 150Manat. You will have to pay the full fare even if you only want to go halfway.

The Dashoguz bus station has buses leaving daily at 7 and 8 AM for Ashgabat.  A shared taxi costs around 150 Manat.

Hitchhiking.
Hitchhiking is a popular way of transportation in Turkmenistan. Just be aware that cars can be far between, I counted 11 cars on my drive from Ashgabat to the crater.

Where to stay at Darvaza Gas Crater / The Gates of Hell.

There is no guesthouse or hotel at the premises of the crater. Instead, there six different groups of yurts located yo the southern side of the crater, all around 200meters away.

All yurts are owned by various local Turkmen travel agencies and locked up when they are not around. But luckily the western toilets are open and available for the use of campers.

You are free to pitch your tent wherever you want in the area. But be aware that strong winds are not uncommon in the area, so choose a place with solid ground. 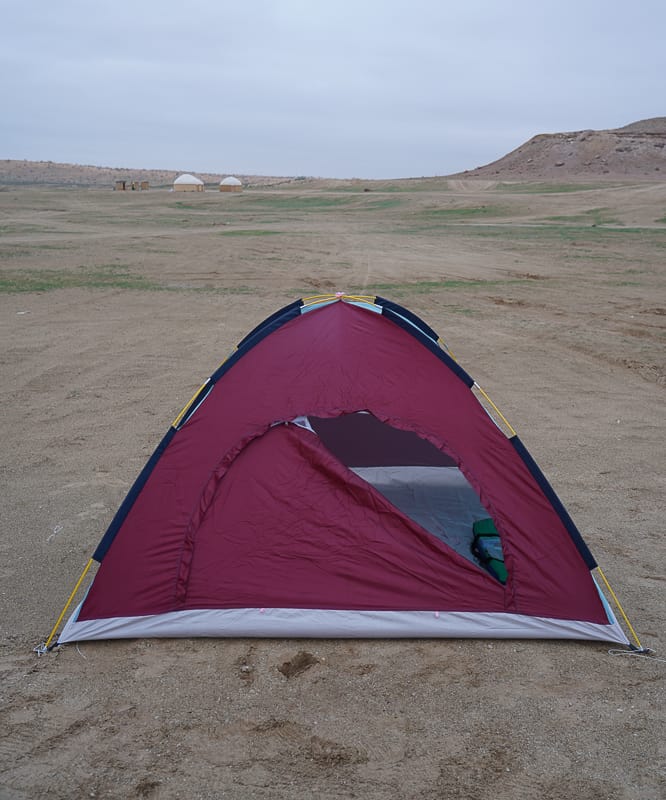 The cold tent that I slept in close to crater

While Darwaza village is tiny, there are a few very basic homestays options available there for around 10usd a night.
You can arrange them to drop you off at the crater and pick you up later. This should cost you around 50USD. 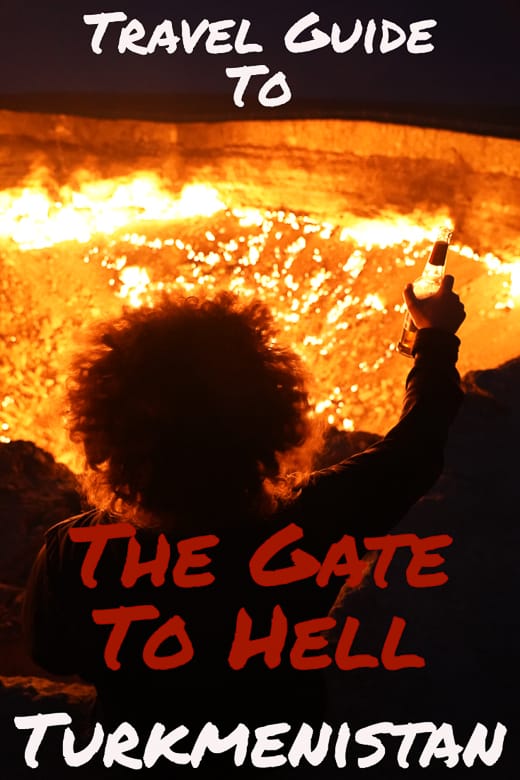 In the remote Karakum Desert in Turkmenistan is where Darvaza Gas Crater is better known as the Gates of Hell Is located, click here to read a complete travel guide.