Top 13 Things To Do In Saint Petersburg, Europe’s Most Beautiful City

Once known as Leningrad and before that Petrograd, Saint Petersburg, Russia, is the country’s second-largest city.

Set next to the Neva River close to the Baltic Sea, this city is home to over 5 million people. 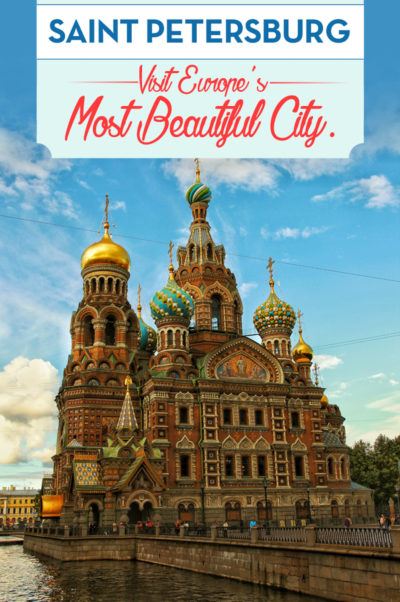 It’s the world’s northernmost city, founded by Peter the Great and named after Saint Peter the apostle.

Once home to the Tsars of Russia, it is today known as the country’s cultural capital. 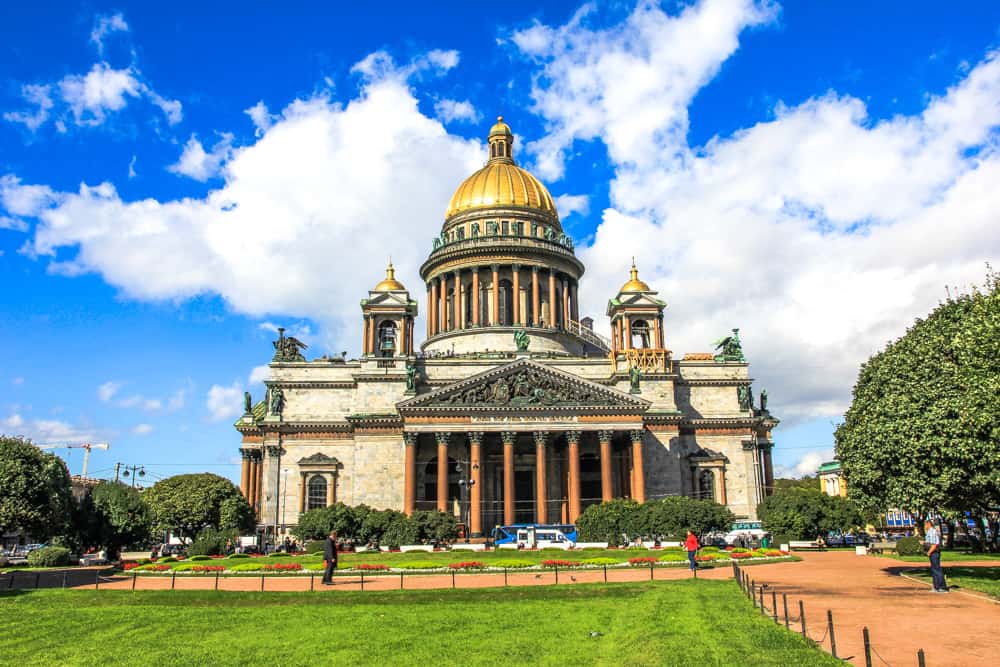 With iconic sights such as Hermitage Museum, Nevsky Prospect, Peterhof Palace, and so much more, it has a fascinating heritage ripe for exploration.

Top Things To See And Do In Saint Petersburg.

One of the city’s most popular attractions with over 3 million items in its esteemed collection, State Hermitage Museum showcases everything from fine art to ancient artefacts.

Even if you don’t plan on entering inside, the exterior is an architectural gem in itself, with columns in white and green/gold facades which can be viewed from the river or Palace Square. 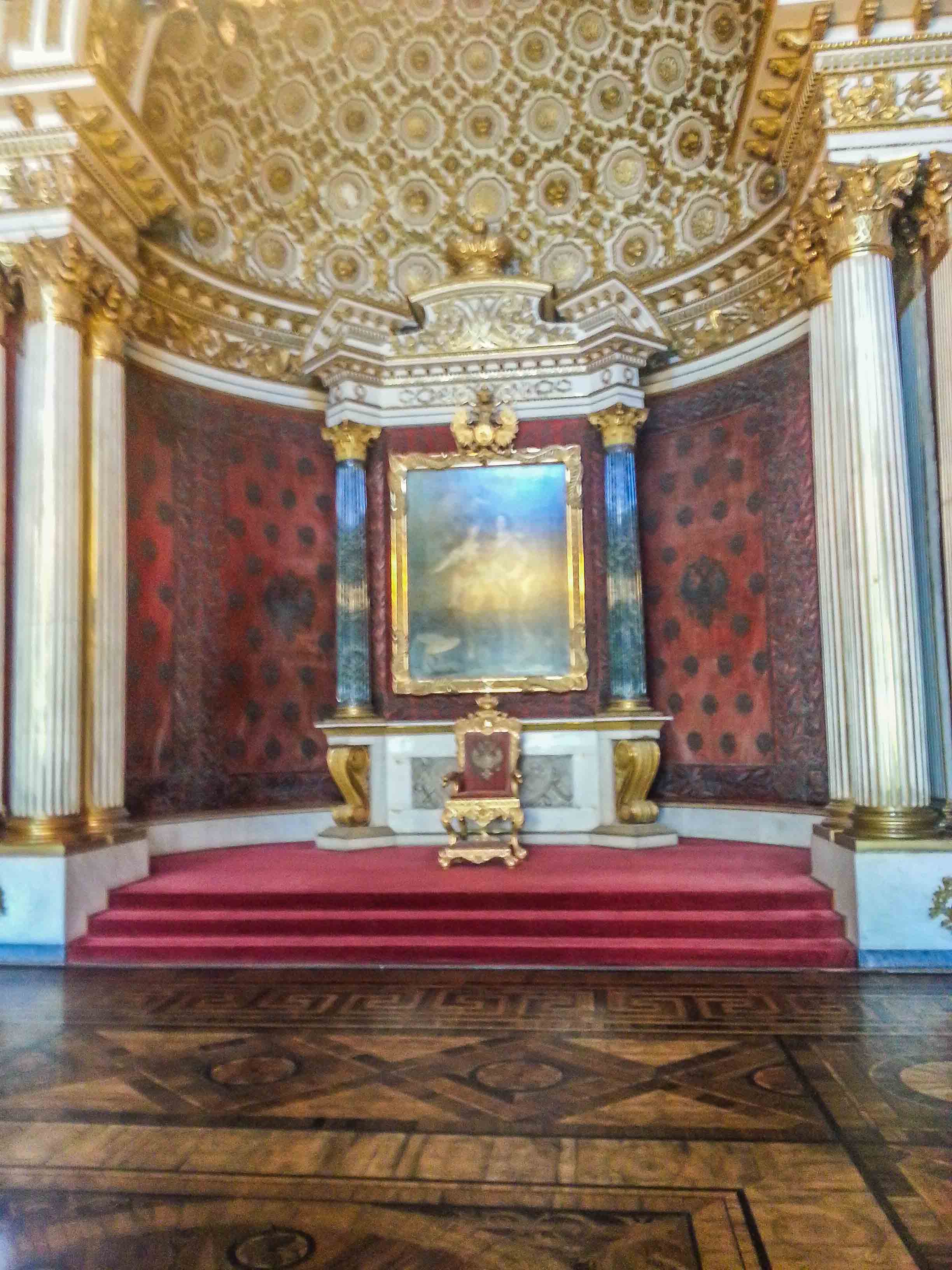 Supposedly an important chair inside the Hermitage Museum.

There are six buildings in the museum complex in total, five of which – Winter Palace, Small, Old, New Hermitage and Hermitage Theatre can be accessed by the public.

Within, you’ll be treated to Egyptian collections, artefacts dating from ancient Mesopotamia and classical Greek jewellery, pottery and sculptures. 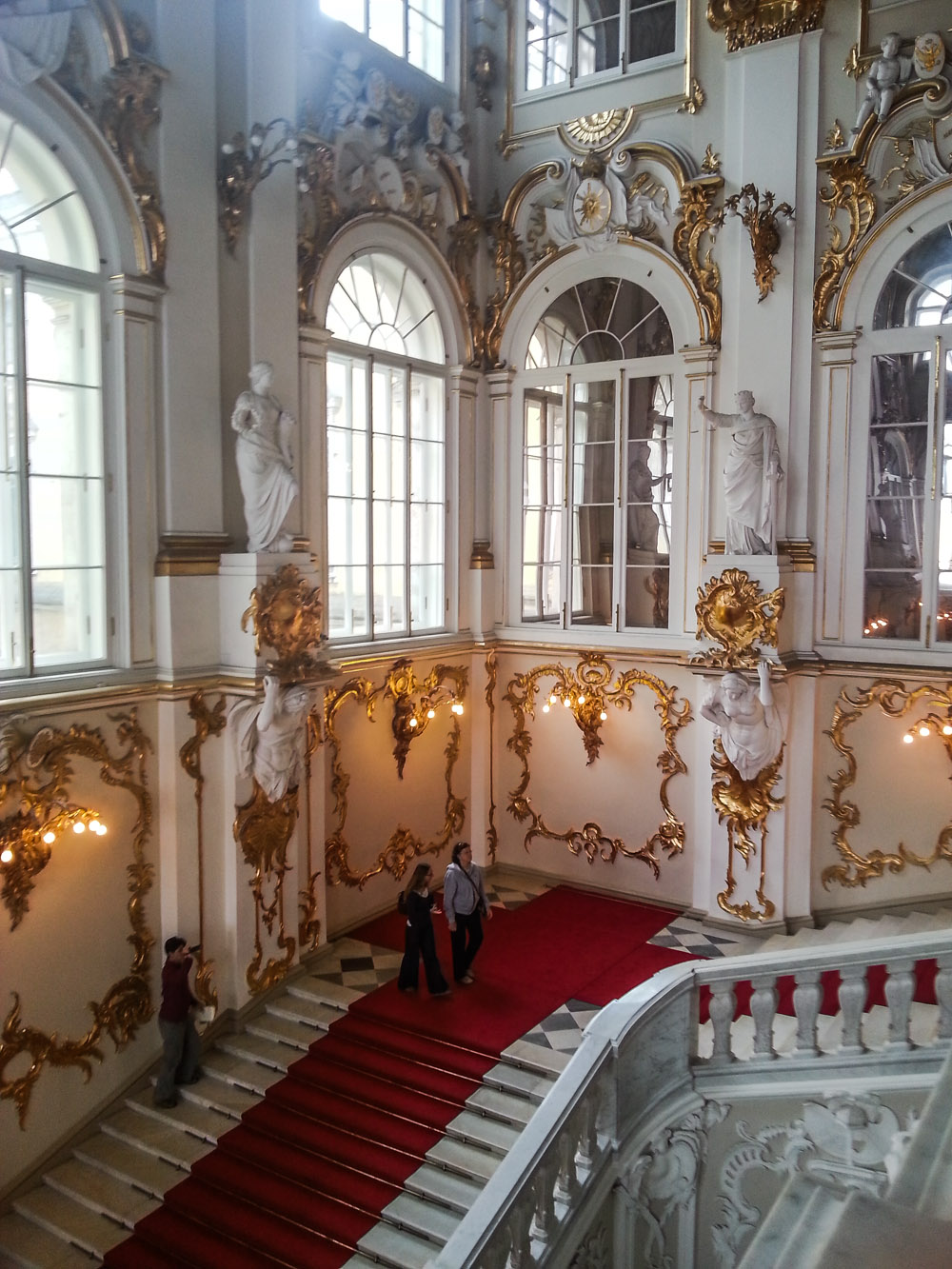 Some nice stairs inside the Hermitage.

There are prehistoric relics from the Palaeolithic era to Iron Ages, European Fine Arts. Impressionist works, Catherine the Great’s personal collections, and so much more.

In fact, you’ll need an entire day or possibly longer to explore this, the world’s second-largest art museum.

If you only have limited time in St. Petersburg, be sure to add this museum to your itinerary! 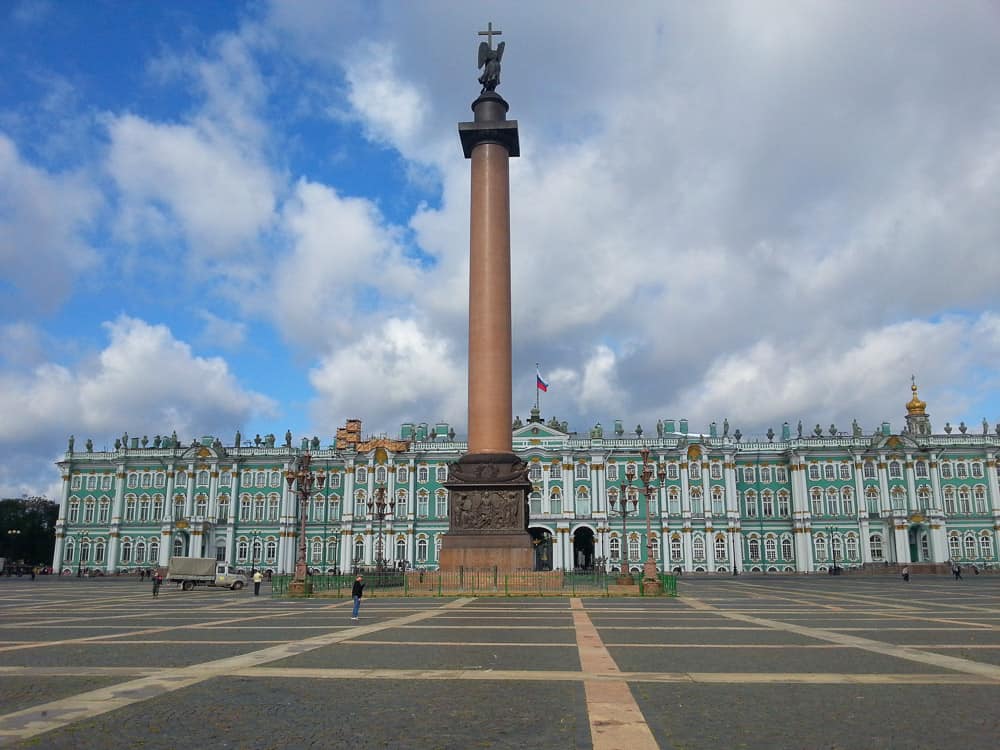 Outside The Hermitage museum

Take in a Performance at Mariinsky Theatre

The theatre – named after the wife of Tsar Alexandra II – Empress Maria Alexandrovna, has been here since 1860 when it was known as Kirov Theatre.

This magnificent building, since it opened, has hosted stage performances and premieres from Tchaikovsky and Mussorgsky and famous ballets such as Sleeping Beauty, Swan Lake and The Nutcracker.

Today, in addition to hosting live performances, the theatre has its own record label, which focuses on releasing music by Russian composers Stravinsky, Tchaikovsky and Rachmaninov.

If you enjoy the arts and are going to be in St. Petersburg for several days, book tickets to see a world-class performance – you won’t be disappointed.


See Jewelled Eggs of the Tsars at Faberge Museum

House of Faberge was founded in St. Petersburg in 1842 by Gustav Faberge. Originally a jeweller, he became famous for designing jewel-encrusted eggs for the Tsars of Russia.

Today, you can view these iconic collection pieces in the Faberge Museum.

The incredible jewelled eggs are famous the world over, and there are several museums dedicated to them, but if you want to learn about Gustav Faberge, his family and how it all began, this is the museum to visit.

St. Petersburg is built on 42 islands, and once upon a time, before bridges were constructed, cruising was the only way to navigate the city.

Hermitage Museum as from the river.

You’ll dip beneath the famous coloured bridges on Neva River whilst enjoying views of Peter and Paul Fortress, Vasilyevsky Island and the Summer Garden.

This tour only takes around an hour, so you’ll have plenty of time to revisit your favourite spots throughout the day!

Discover Church of the Savior on Spilled Blood 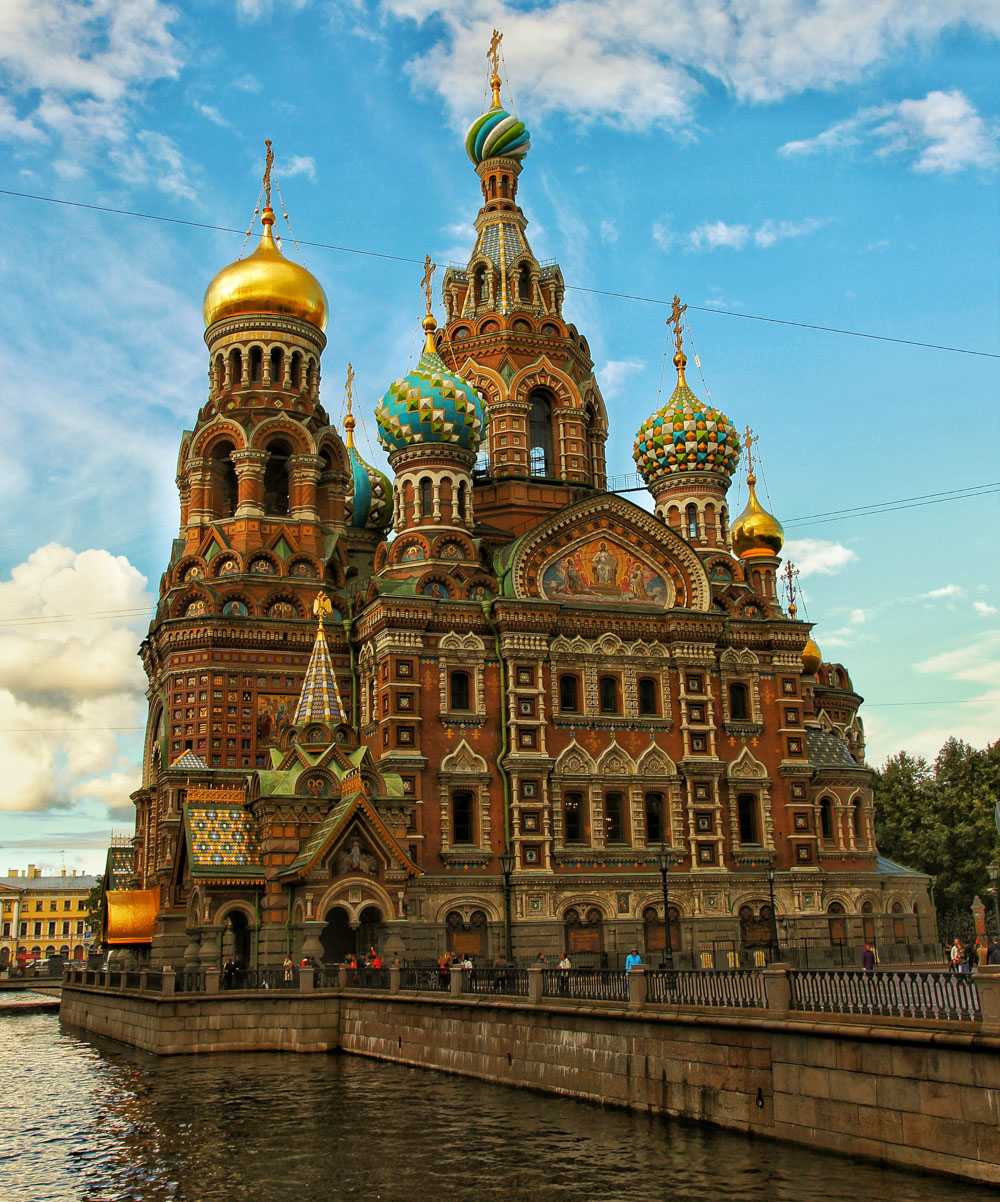 Church of the Savior on Blood

One of St. Petersburg’s architectural masterpieces is Church of Our Savior on Spilled Blood.

The former Russian Orthodox Church was completed in 1907 and is built in Baroque, Neoclassical and Russian Revival design.

It’s one of the city’s main attractions, with ornate domes, intricate frescoes and 7500 square metres of mosaics inside.

If you don’t wish to enter, you can gain incredible views from Griboedov Canal, but if you do venture inside, you’ll be rewarded with interior frescoes and mosaic works depicting biblical scenes and figures created by celebrated Russian artists of the time.

The Church of the Saviour of blood is built on the spot where Emperor Alexander 2 was assassinated in 1881.

If you have viewed the city from canals and rivers, try it from the rooftops!

You can take a guided rooftop walk in the city, seeing streets and skylines from an elevated perspective.

One particular tour to highlight is the Official Rooftops Excursion of St. Petersburg.

It’s a great way to see the city in all its glory, plus the tour provides you with binoculars so you can see everything in great detail.

The main street of St. Petersburg is Nevsky Prospect.

Begin at the intersection at Stroganov Palace before venturing to Kazan Cathedral, see monuments dedicated to Catherine the Great, and browse goods at The Passage – Nevsky Avenue’s premier department store.

This store was quite the trailblazer. It opened its doors in the late 1840s and was one of the first buildings in Russia to use gas for lighting; then, in 1900, an electric station was installed on an underground floor!

When you’ve shopped and stopped for coffee, continue to the Russian National Library – the oldest public library in Russia and Alexandrinsky Theatre, which was built for the Imperial troupe of Petersburg.

Visit the Island of Peter and Paul Fortress

Peter and Paul Fortress with its city beach

Set on an island connected by bridges, Peter and Paul Fortress is instantly recognisable from its needle spire, which dominates the skyline.

The fortress was originally built to defend the maritime city from Swedish invaders. 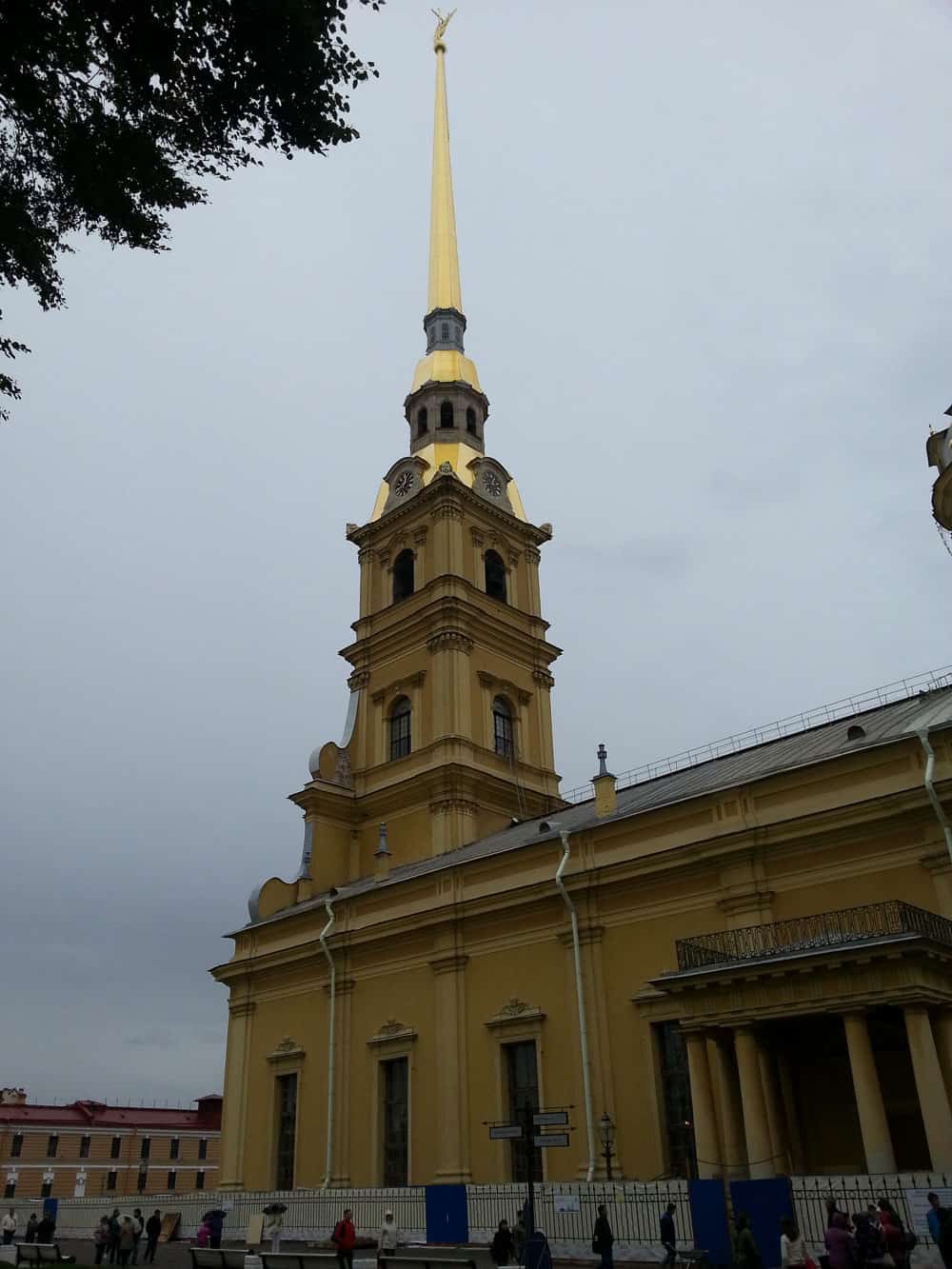 However, Peter the Great defeated the opposition before it was even completed!

It has since served as a military centre and prison for political dissenters and, latterly, a museum.

Inside the vast complex, you can see Peter and Paul Cathedral, visit the resting place of the Romanovs, watch military processions and firing of the noon-day gun.

It’s a great day trip for anyone interested in Russian, maritime or military history.

Sample Russian Vodka in a Ryumochnye

A visit to Russia wouldn’t be complete without sampling the local drink – vodka, and the best place to do this is in a Ryumochnye.

This is a specific style of 19th-century Russian drinking house.

You could call it a bar, but it’s more than that – most mainstream Ryumochnye has a definite Soviet vibe and is places for working men to kick back and enjoy vodka with their buddies.

Beverages come in bottles or shot form, and some places offer self-serve and snacks.

If that sounds too hardcore for your taste, there are updated versions of Ryumochnye in the city, like Mayak in St. Petersburg, where you can gain a similar experience, and everyone is welcome. 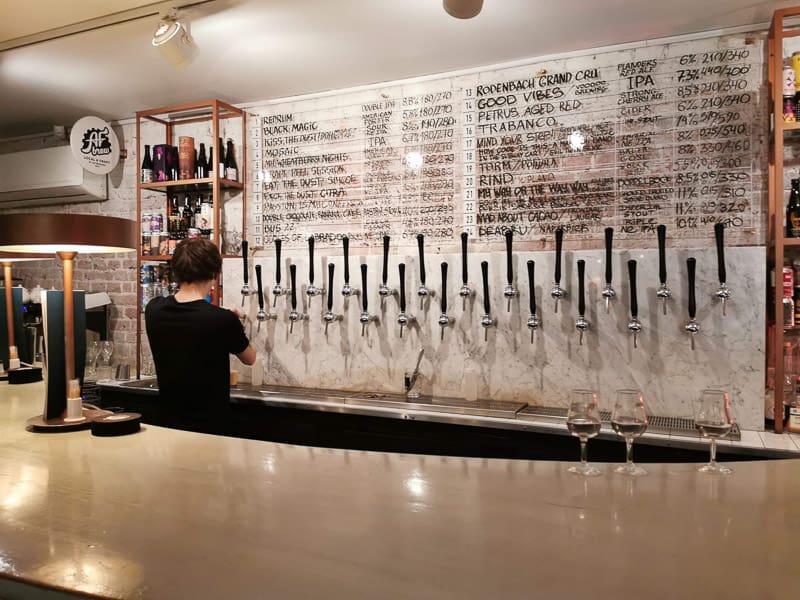 Saint Petersburg, Russia’s second-largest city, has an exciting, rapidly growing craft beer scene, in part due to its history and geography.

Historically, the Russian empire was influenced by Northern Europe, and the Dutch & English beer-drinking culture eventually made its way here.

Today is Saint Petersburg, home to a growing number of modern microbreweries, cool taprooms and bars. 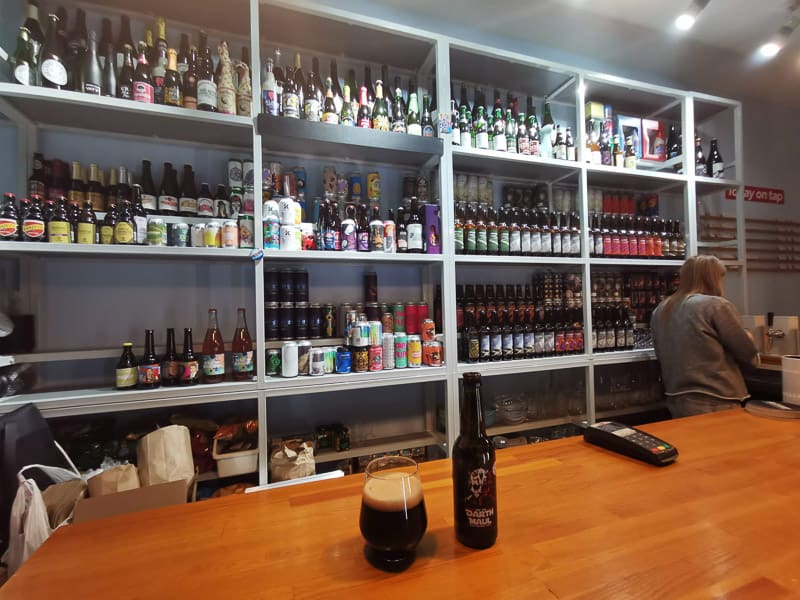 Saint Petersburg is also home to Stepan Razin Brewery, the oldest brewery in Russia (now, of course, owned by Heiniken), which opened in 1795, but today the building turned into the Saint Petersburg Beer Museum showcasing the history of beer in Russia and the Soviet Union.

Russia´s largest and most popular brewery Baltika is also located in Saint Petersburg, and it´s possible to take a brewery tour of their huge brewery.

A stately palace of blue and gold, Catherine Palace is located 26 kilometres south of St. Petersburg.

Named after the wife of Peter the Great, this place was originally a two-storey modest building commissioned in 1717.

The exterior, which stretches for one kilometre in circumference, is surrounded by woodlands, lawns, gilded balconies and reliefs. However, the interiors are even more impressive.

With Great Halls, a White Dining Room, Amber Room and more, it’s the perfect place to step back into history and discover life as Russian aristocracy.

If you’re going to visit Catherine Palace, you should see Peterhof too, 40 minutes’ drive away! You can even take a hydrofoil speed boat from right behind the Hermitage in Saint Petersburg centre.

Sitting close to the Baltic Sea, Peterhof Palace was constructed by Peter the Great to be Russia’s version of Versailles.

The opulent residence surrounded by sculptures, fountains and tiered staircases leading to the grand entrance evokes mystery and history of a bygone era.

On a guided tour, you can learn more, discovering the Throne Room, Portrait Hall and Peter the Great’s Oak Study. 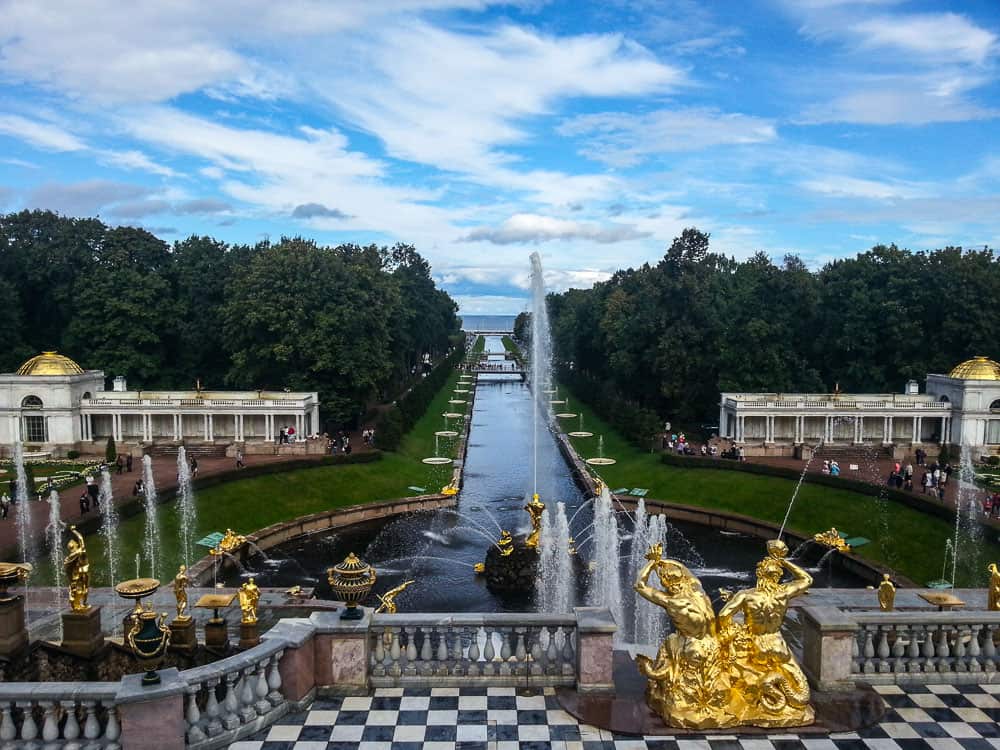 The palace offers great insight into his life and legacy, and if you are interested in history, art and interior design, you’ll love it.

Want to know more about Peterhof?

Spend a Day by the Finnish Border at Vyborg

Just over an hour from central Saint Petersburg by train is the city of Vyborg.

It sits on the Gulf of Finland and was first settled back in the 12th century.

The city has been occupied by Finnish and German forces and suffered damage during the Second World War.

However, it has since been rebuilt. It’s a charming centre to wander around, with narrow cobbled streets, a medieval castle and Finnish art nouveau structures sprinkled throughout.

An easy day trip from St. Petersburg, it can also serve as a stop-off point if you’re crossing into Finland to continue your adventure.

How to Get to Saint Petersburg, Russia

The maritime city is well linked to Europe by air, sea, rail and road. You can fly into Saint Petersburg through Pulkovo International Airport.

There are around 1100 international flights a week and 1200 domestic flights operating in and out of the airport.

Although many flights from European cities to Saint Petersburg are direct, you may have to change flights if flying from further afield.

It’s also possible to travel to St. Petersburg by train.

The most popular (and most frequent) routes operate from Moscow, Helsinki and Tallinn. However, there are options to travel from other areas in Central Europe, Central Asia and Eastern Europe by rail.

There is a central bus station in Saint Petersburg, with services to and from Moscow, Pskov, Novgorod, Vilnius, Riga, Tallinn and Helsinki. Some of these journeys can be long and arduous.

Baltic Sea Cruises also operate to St. Petersburg as part of a larger itinerary, and St. Peter Line Ferry sails from Helsinki in Finland and Tallinn in Estonia.

Top 12 Things to Do in Hiroshima, Japan
← Previous
18 Things to do in Riga | Bucket List for the Charming Capital of Latvia
Next →
Click here to cancel reply.

Thank you! So great review about our St. Petersburg!

What to do in St. Petersburg in 1 day - Probe around the Globe

[…] more about the beauty of St. Petersburg from the Unusual […]

Which hostel did you stay at? I am potentially thinking of going to Russia for World Cup 2018 after my World Cup trip to Brazil two years ago. Saint Petersburg is one of the host cities, and so I am very interested in learning more about this city and recommendations from fellow travellers who have been.

I stayed at Soul Kitchen Junior, and I will go so far and say its by far the best hostel I have ever stayed at!! Anywhere in the world, no other hostels even get close to it:)