Jigokudani Monkey Park is famous for the Japanese macaque monkey, better known as the snow monkey that enjoys sitting in the natural hot springs during the cold winter months.

The park is located about 250km north-west of Tokyo and can easily be done on as a day trip from Tokyo,
If you got time and want to visit one of the most traditional places in the whole of Japan, are Unesco World Heritage Villages of Shirakawa-gō and Gokayama a great place to visit.

The entrance gate to the park. The park is inhabited by Japanese Macaques, which are also known as the famous Snow Monkey of Japan,

Be sure to use some proper footwear; it’s pretty slippery

The Snow monkey are very used to humans, and they don´t seem to mind tourists putting their cameras just a few cms from their faces, you will get so close, that when some of the snow monkeys jump into the pool, will you get the water splash right on you.
There´s a small information centre/museum when you enter the Hot spring area, most of the information is in Japanese, but some part is translated into English as well.

You remembered where you parked your car?

Look at my you filthy Human.

The park is open all year, but it seems its only in winter tourist will visit the place since the place dost look any special when there’s no snow in the area, and there’s no Snow monkey in the pool during the warmer months.

There is usually snow in the park from December to March, and the best time to visit the park is from January to February.
There’s nothing else to see in the park except for the snow monkey, they scenery it’s nothing to brag home about.

Someone is enjoying themselves in hot water.

The park is famous for the monkeys sitting in and around, cleaning each other in the natural hot spring that has been build into a pool or Onsen as it’s called in Japan.

How to visit the Snow Monkey´s in Japan:

Jigokudani Monkey park is easy to reach on a day trip from Tokyo, especially if you have to Japan Rail Pass and can use the Shinkansen train.
You can also reach the park by using the bus, but it will take a lot longer time.

First, you need to the Shinkansen to Nagano; the high-speed train makes the 220km trip in 86min.

The bus from Tokyo also stops right outside the train station.

The bus from outside the train station to the park entrance is 1400yen.

The entrance tickets to the park are 500 yen.

There’s nowhere to buy food inside the park, so you are best off with eating in Nagano before/after you have visited the park.

There’s a live webcam, that’s aimed at the hot spring where the snow monkey relaxes, you can watch it here. 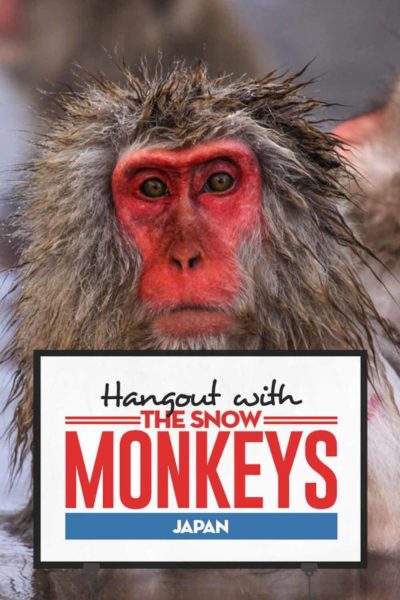