Srinagar the summer capital of the Indian state of Jammu and Kashmir, Srinagar is by far, one of the most scenic cities you’ll get to experience on your travels through India.

Houseboats on Dal Lake in Srinagar.

Rightly referred to as the crowning glory of India, Srinagar is the northernmost city of the country and a city that is unparalleled in its beauty. Think mountains and rolling meadows, lakes and rivers, vast expanses of rocky wilderness, gardens in hues of varying degrees – that’s just a slice of this little piece of ‘Heaven on Earth’! 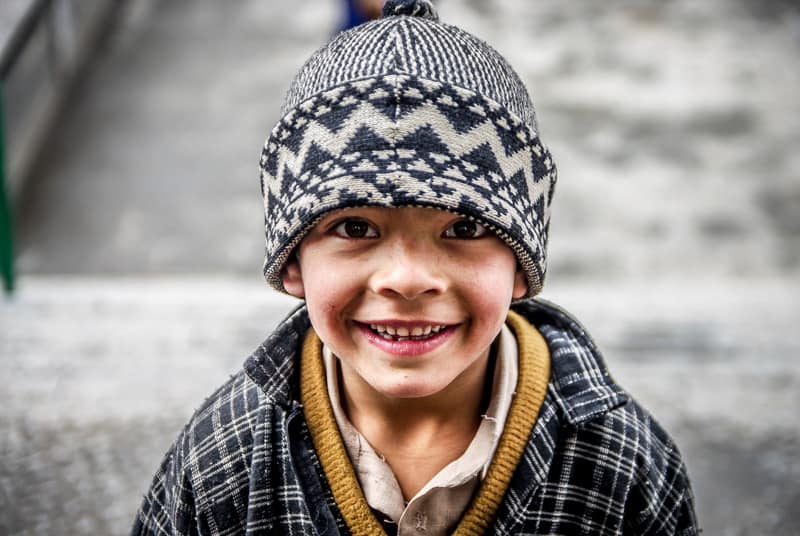 There´s always a smile in Kashmir

History tells us that…

Srinagar enjoyed great wealth and fortune in earlier centuries. Having changed hands between rulers from different dynasties, it was a sought after location thanks to the wealth of natural beauty it offered! From the Mughals to Afghan tribes, Hindu kings to Buddhist and Sikh rulers, everyone wanted a slice of the region.

The floating market on Dal Lake

Such was its beauty that a famous Mughal King by the name of Jehangir once famously said of Kashmir that ‘if there is Heaven on Earth, it is here, it is here, it is here’!
Srinagar continued to enjoy the privileges of being a part of a kingdom and remained an integral part of Kashmir, considered a princely state right until India achieved its independence in 1947. 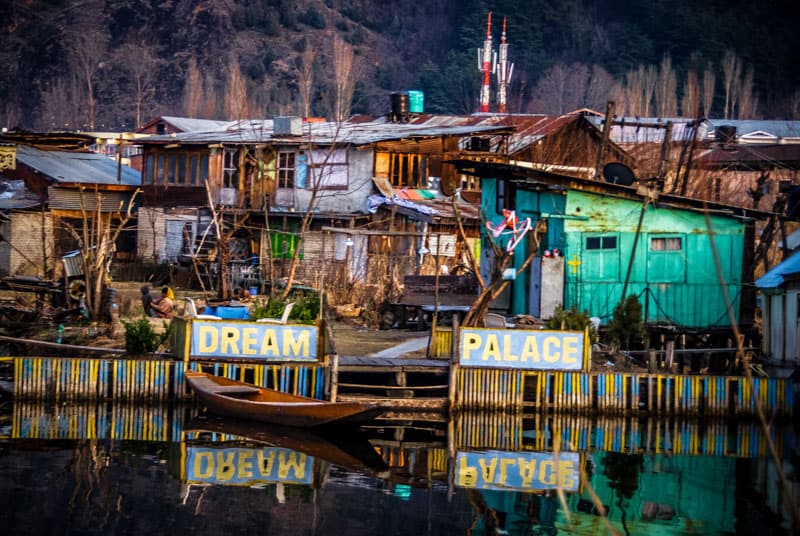 Back when there was hope in the region, not so much a dream palace now.

The famous houseboats on Dal Lake

But thereafter, the state was ravaged by insurgency, militancy, war, and terrorism in attempts by multiple stakeholders to lay claim to this region of India. It still is a somewhat contentious part of the country, but it remains India’s crown and a stunning crown at that.

Have your wits about you.

Because travel through Srinagar requires tact, patience, and a bit of a rugged outlook! If you’re someone who possesses these traits, don’t think twice before planning a trip to Srinagar, and believe you me – you will not be disappointed.
And yes, leave behind any preconceived notions you may have of what the city of Srinagar is like.

It’s unlike anywhere else you’ve been in India. I’ve travelled through the country a lot, and while each city is vastly different from the other, the city of Srinagar hits the ball out of the park by a mile or more! 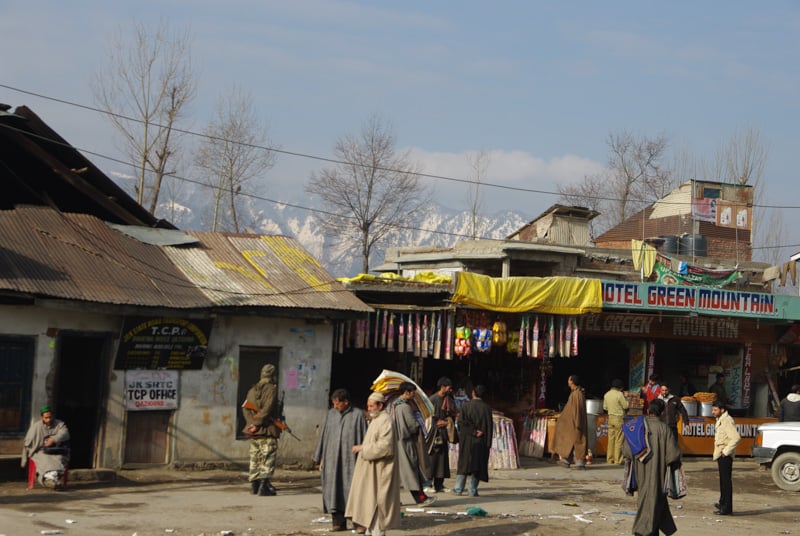 There´s armed military on every corner around these days

If you leave aside the city’s past and the baggage that comes with it, and experience Srinagar for what it truly is, you’ll end up going with a very different outlook to what you initially came with.

Such is the beauty of Srinagar. Located in the Valley of Kashmir, Srinagar enjoys a wealth of natural beauty. The city sits on the banks of the Indian River Jhelum, in the heart of the Kashmir Valley. Located in the midst of two hills, it’s at an elevation of over 5000 feet and is surrounded by the Himalayan and Pir Panjal mountain ranges. 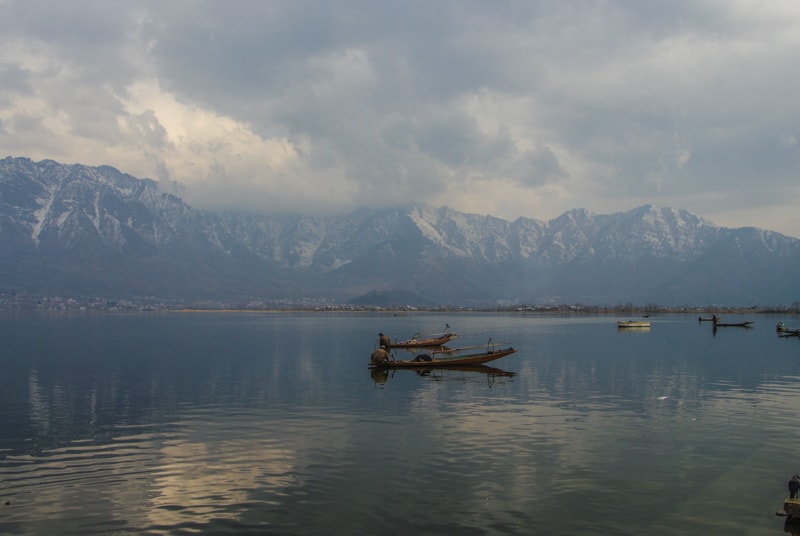 And if mountains, hills, and rivers weren’t enough, Srinagar finds itself blessed with several lakes – more than enough to earn it the title of the ‘Venice of the East’! No surprises why Srinagar made it to the top of my list of places to travel in India.
And in spite of a past that’s been largely marred by war, bloodshed, and misfortune, you’ll get to meet the most wonderful, welcoming, and warm locals who only want peace and a simple life. 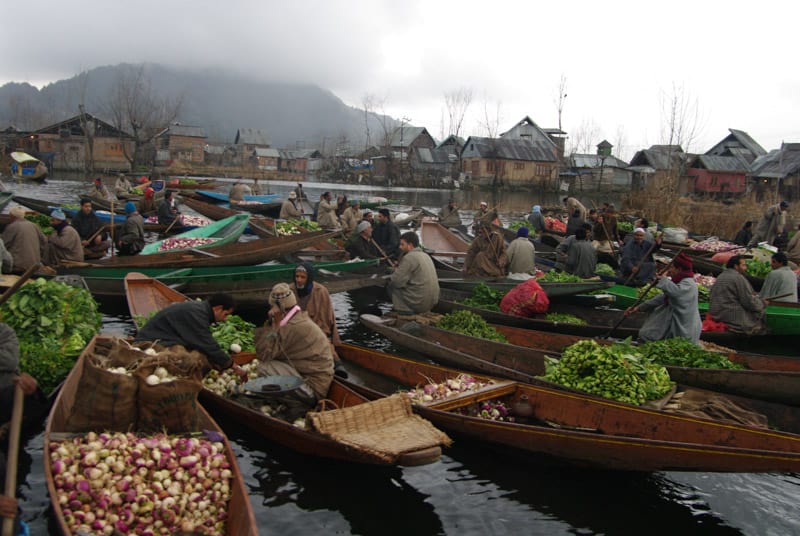 As a city that holds immense historical, geographical, natural, and archaeological significance, there is a lot to experience in Srinagar and the surrounding areas. The best way to travel through Srinagar is to travel with an open mind and be open to new and unique experiences.

The time of the year makes a difference too, and whether you plan to visit in the summer, autumn or winter, each season throws up a different experience. Summers are mild at best; autumn gives you colours that you could never have imagined, while winters, though tough, are perhaps the most picturesque times of the year.

Dal Lake – the ‘jewel of Srinagar’. 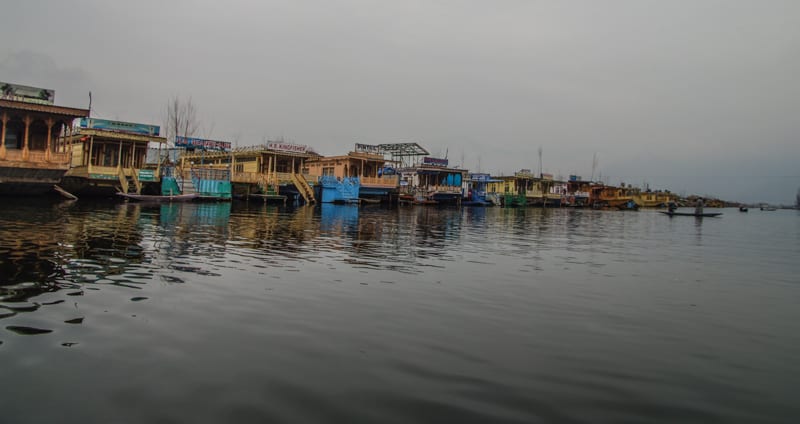 Staying on a houseboat on Dal Lake is a must-do 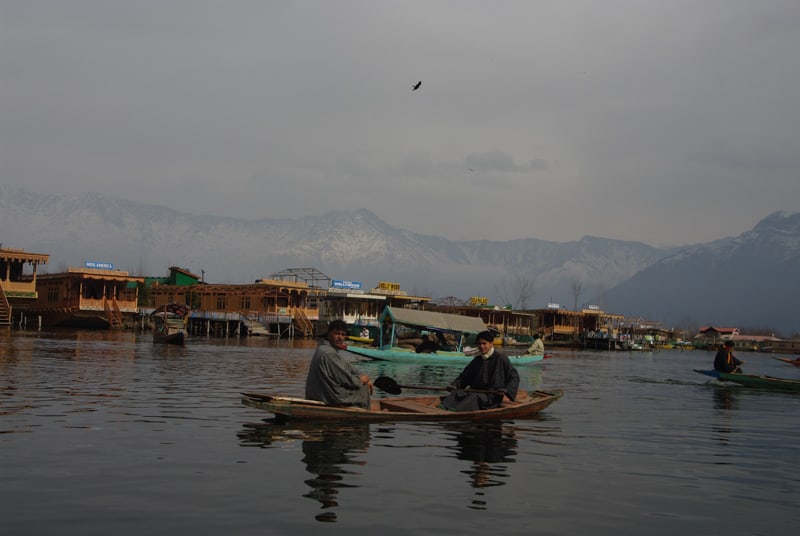 The most common way to get around Dal Lake is by small wooden paddle boats.

Dal Lake sits in the midst of the city and covers about 22 square kilometres. Very easily accessible thanks it being an urban lake; Dal Lake is the biggest draw for tourists travelling here. And an experience you shouldn’t miss when visiting Srinagar is enjoying a leisurely ‘shikhara’ boat ride, similar to the gondolas of Venice! And an even better experience is getting to stay on a houseboat on the Dal Lake.

A pretty common sight on the Dal Lake is the ornate wooden crafted houseboats that gently bob up and down on the waterfront. A lot of hotels now offer accommodation in houseboats, or if you fancy having a meal on the lake, hop into a floating restaurant to enjoy a hot meal surrounding by calm, blue lake waters. 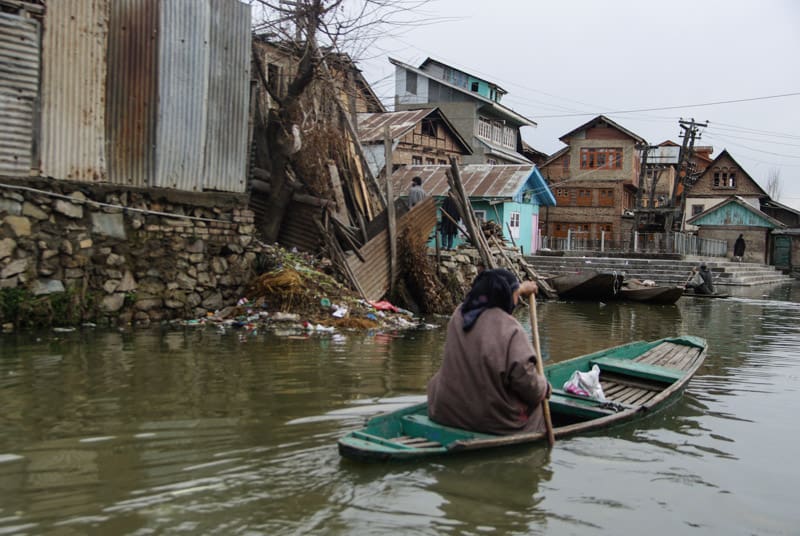 Getting around dal Lake

But enduring sights of the lake continue to be those of the floating market where you can see fruits, vegetables, fresh flowers, spices, nuts, and freshly baked bread being sold by elderly locals. That is one of the most special sights you’ll get to see in the city!

The splash of colour against a largely blue setting is invigorating, and there isn’t a place I have encountered quite like this. What makes the experience even more special – the people! The simplicity of the local folks, their kindness and earnestness are so very refreshing. You can see the strife and pain in their wrinkles, but their smiles tell a whole different story! 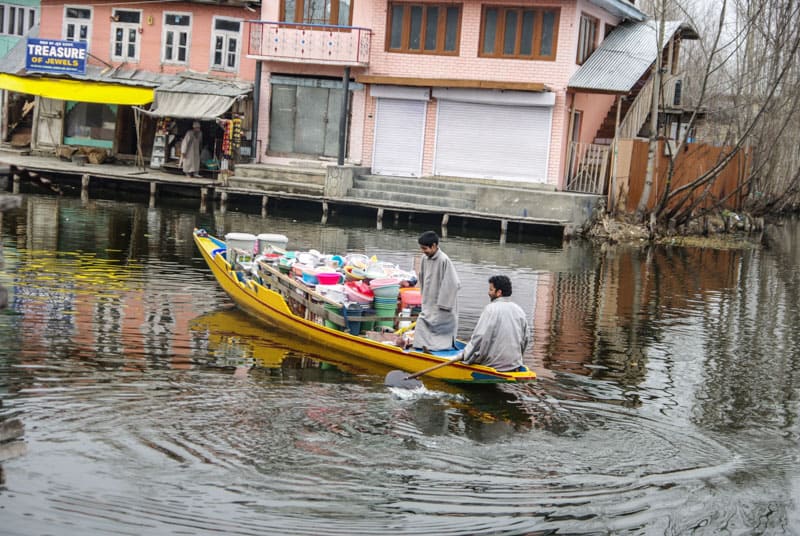 Fun fact: Many Indian movies have been filmed here in Srinagar thanks to its stunning natural beauty, and while song and dance is an integral part of Indian films, many a song has been filmed on the Dal Lake where the hero serenades his heroine on a shikhara! 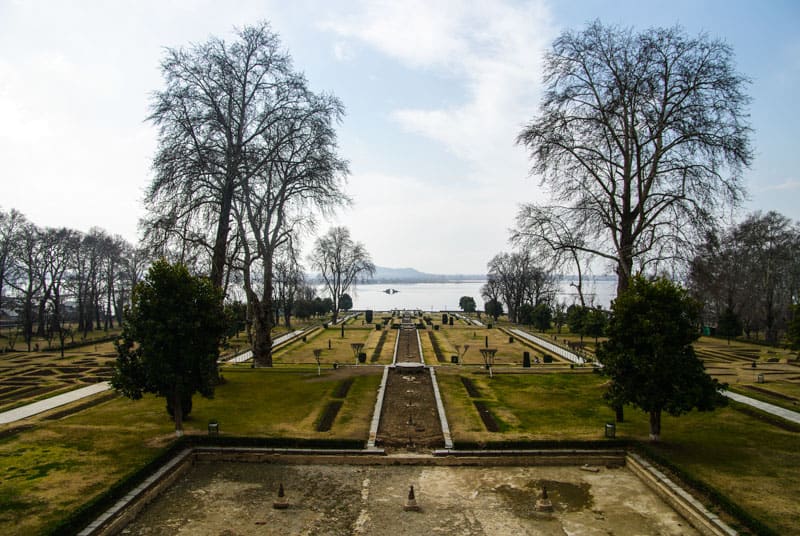 Srinagar is famous for its gardens, during spring this would be full of flowers and colours

Srinagar is known for its stunning gardens, and manicured lawns are a common sight throughout the city. There are a few popular ones that surpass the others, including the Mughal Gardens of Nishat Bagh, Shalimar Bagh, Achal Bagh, Chashme Shahi Bagh, and Pari Mahal. 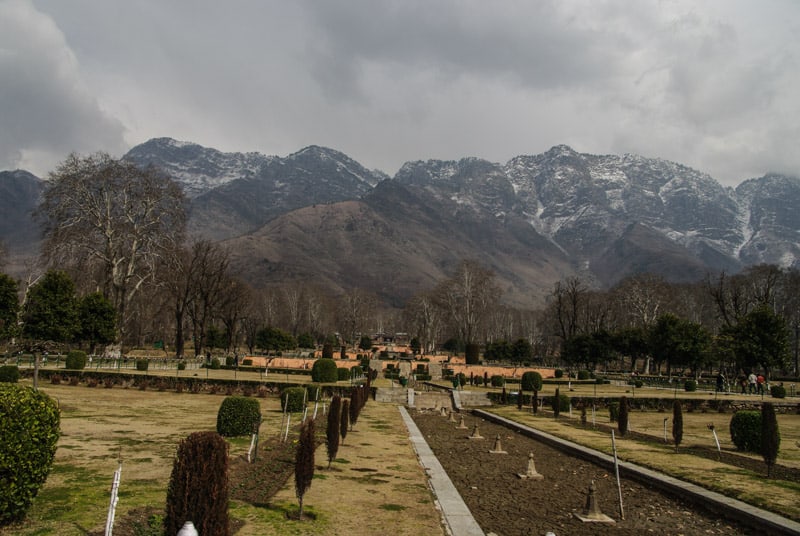 Bagh literally translating to the word garden, each of these gardens has been around since the Mughal rulers, and follow asymmetry to its layout that includes fountains, and geometrical patterns. Nishat Bagh is beside the Dal Lake and high up on its appeal. This terraced garden means ‘Garden of Joy’, and is filled with rare species of flowers, and groves with cypress and chinar trees. 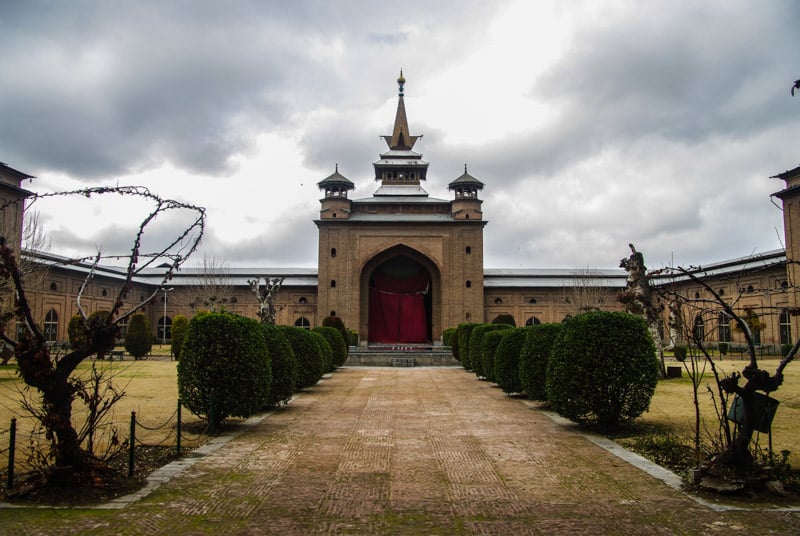 Outside of the famous The Jamia Masjid

Of shrines and Sufi saints… 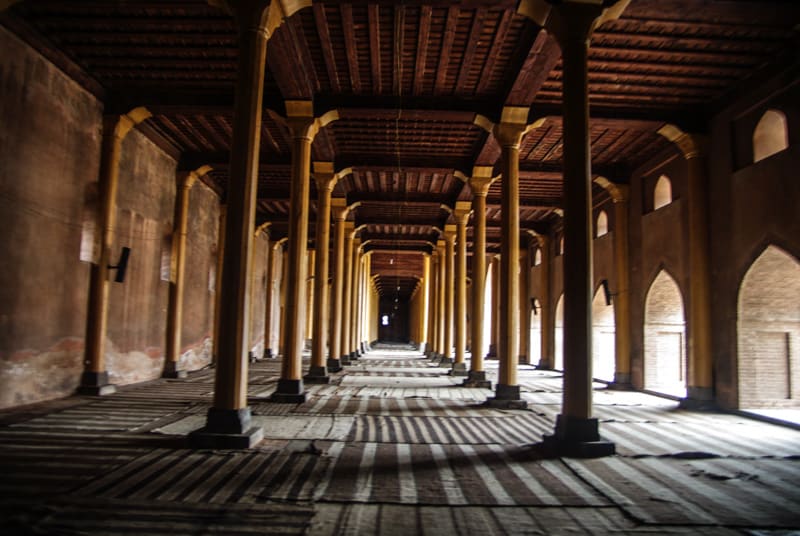 inside of the famous The Jamia Masjid

Sufism has existed in the Kashmir Valley for centuries, and a true testament to this is the many shrines that dot the city. The Jamia Masjid, which is the largest mosque in the city, was built during the Sultanate period. The spacious religious complex includes a large prayer hall with 370 pillars made of deodar trunk. The highlight of the mosque? Immense peace and tranquillity within the mosque, and as you step out bustling crowds and marketplaces! 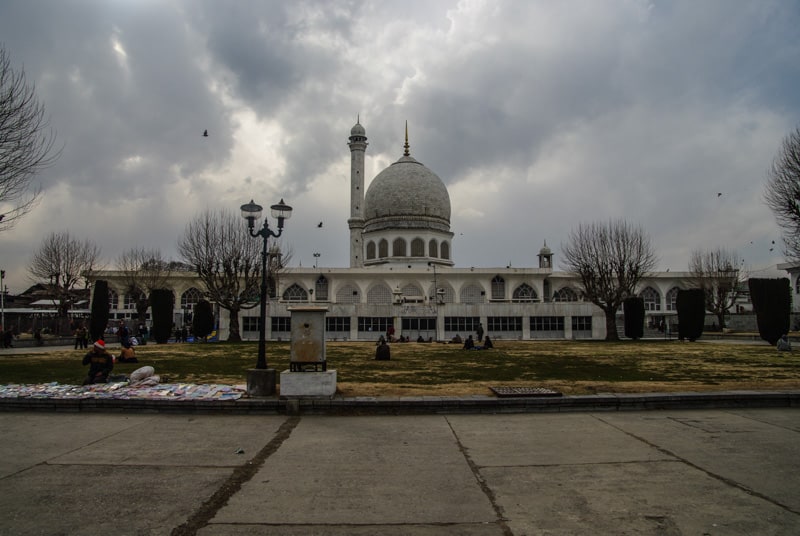 Another very popular mosque in the city is the Hazratbal Mosque on the western side of Dal Lake. Made of white marble, the mosque blends Kashmiri and Mughal architectural styles and dates back to the 17th century. 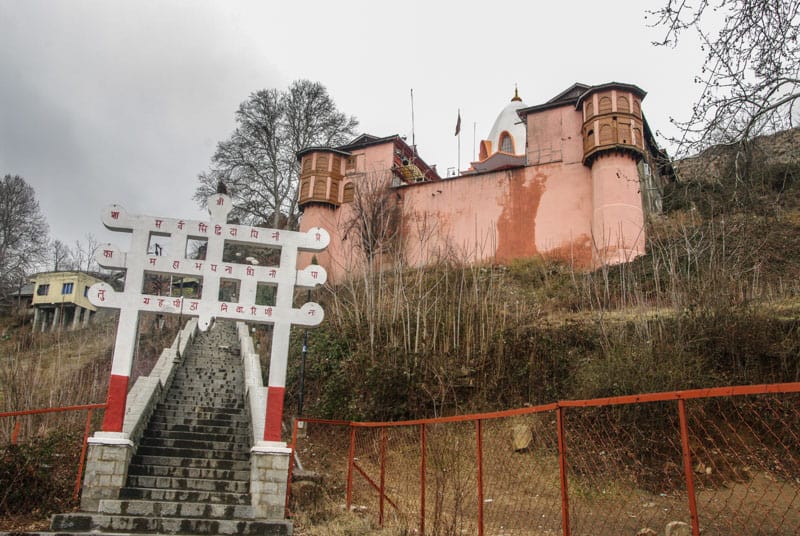 The hustle and bustle of local markets… 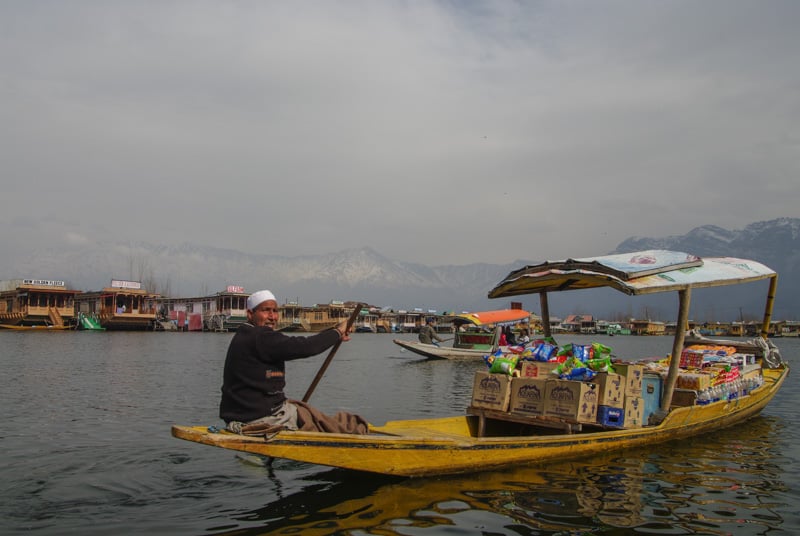 Is worth experiencing in Srinagar! There are several local markets through the city, with the more popular ones being Lal Chowk Market, the Dal Lake Market, Badshah Chowk Market, and the Nehru Park Market, among others. From woodwork to bamboo art, spices to carpets, cashmere shawls to pashmina shawls, saffron to walnuts, you’ll get everything, and more! 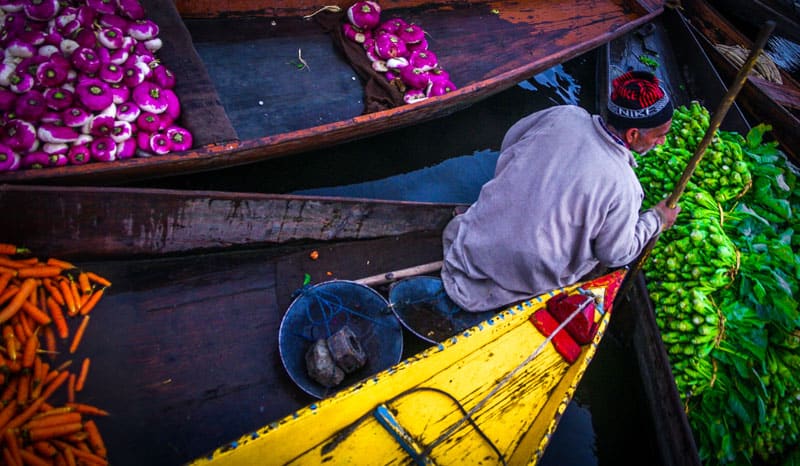 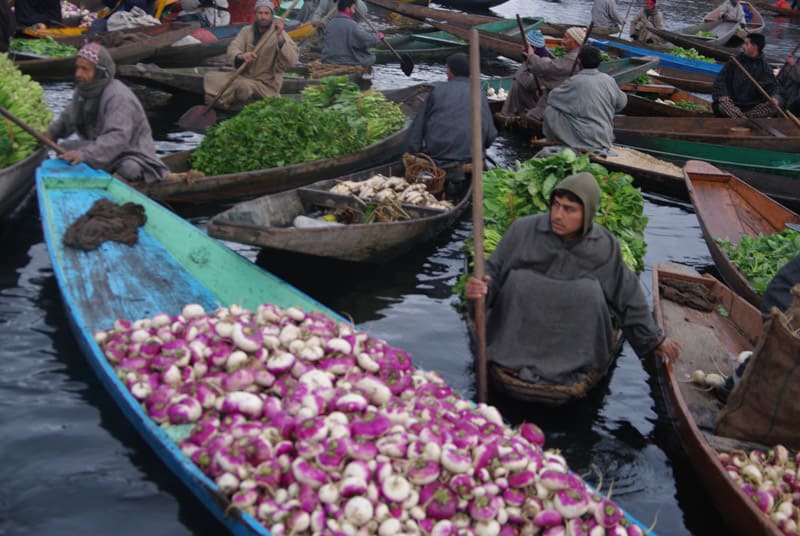 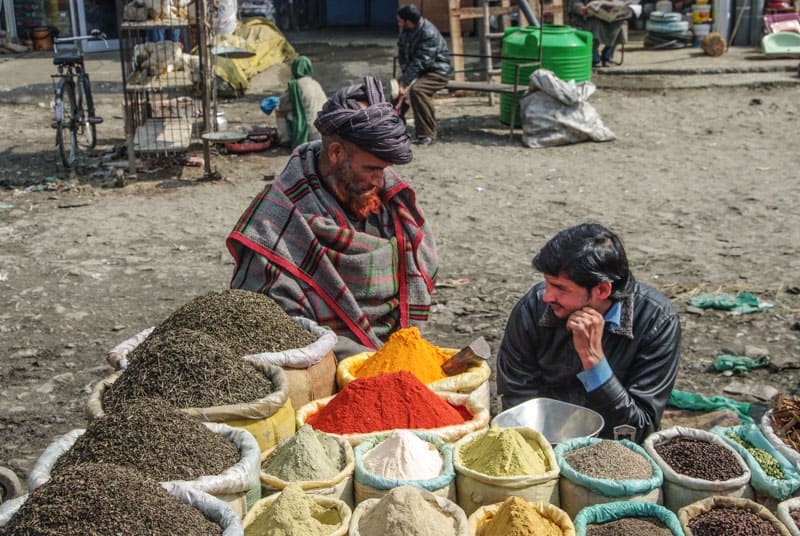 a market on land

Srinagar and the surrounding towns produce the largest crop of apples in the entire country, and sprawling apple orchards are a common sight in the outskirts of the city. Stroll through one of these orchards and bite into this juicy fruit of sin!

Best Way To Get To Srinigar.

Srinigar is pretty well connected to most major Indian cities by flight through Sheikh ul-Alam airport. Flights from Delhi, Amritsar, Jammy Mumbai, Chandigarh, Kolkata and Shimla operate to Srinagar. Train travel is arduous, and the closest railway station is in Jammu, about 290 kilometres away! But there´s current working undergoing to connect Srinagar with Jammu and then the rest of India, the railway line is scheduled to be done late 2021.
So, for now, is either flight a or 8-hour taxi/bus ride from Jammu your only option.

There´s also a huge project undergoing with building a new road tunnel along the way, that will cut the travel time by jeep with almost 4hours.
Srinagar is also connected to the east to Ladhak with the Srinagar-Leh Highway, Just keep in mind that the highway is only operational from May to November due to heavy snowfall in the winder which blocks the road for months. 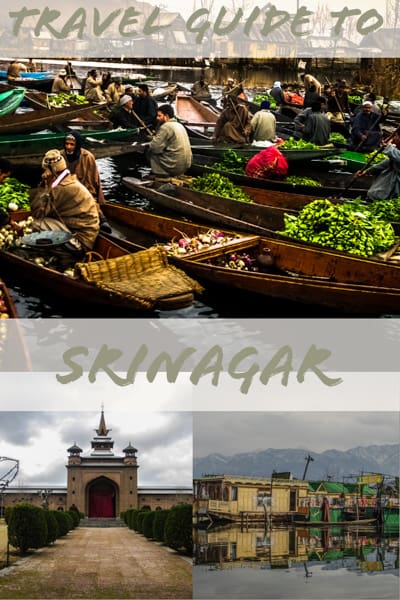 Sundarban National Park Home To The World's Biggest Mangrove Forest And The Royal Bengal Tiger
← Previous
Skopje Everything You Need To Know Before Going
Next →
Click here to cancel reply.

Thank you very much for posting an informative and helpful post