Tbilisi, the capital of the country of Georgia, for me, is one of the most fascinating cities in the world. I am so charmed by the city that I made my fifth visit last December.

With more and more tourists in Tbilisi has also the amount of pickpockets drastically increased in Tbilisi over the last few years. So be aware!

Tbilisi is the largest city in Georgia the country, not the state in the USA, located on both sides of the Mtkvari River, with a population of roughly 1.5 million inhabitants. It was founded in the 5th century but was rebuilt around 29 times since then.

Looking for ideas of day trips that you can do from Tbilisi?
Or 5 Reasons to visit Georgia.

If you’re also planning to visit Yerevan and Armenia, check out this post about 40 things to do in Yerevan. 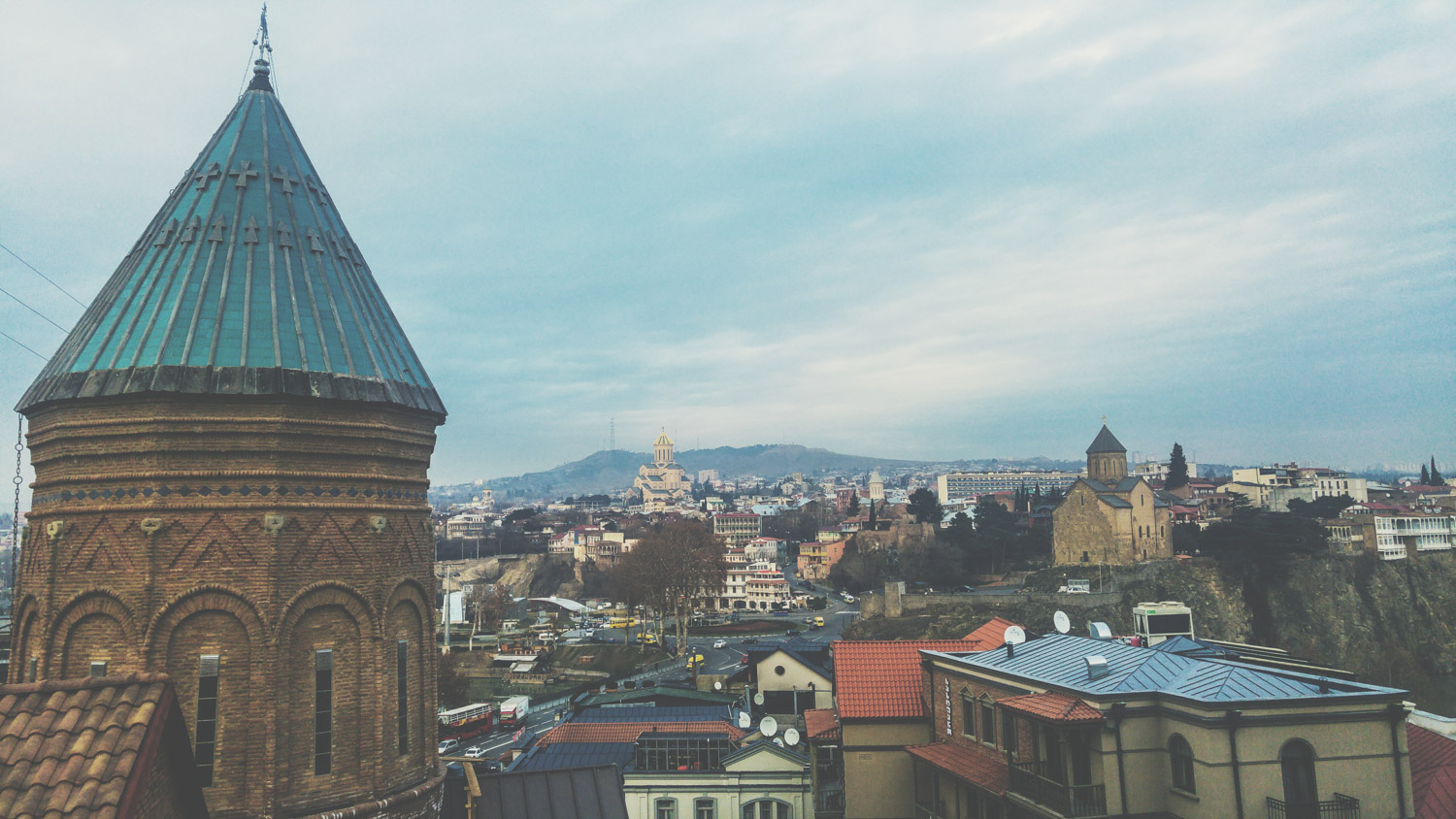 There´s a church around every corner in Georgia.

The newer parts of the capital recently got a huge facelift with modern architecture. It doesn’t yet offer world-class shopping opportunities that you will find in other capitals around the world. Looking for the best place to take Instagram photos in Tbilisi? here a guide for the 35+ best places to take photos in Tbilisi.

But Tbilisi offers something that you will not find in modern capitals charm! If looking for where to stay during your visit to Tbilisi, check out This place.

Here´s my list of the Top 10 things to do and places to visit in Tbilisi.

1. Take a stroll through the old town of Tbilisi.

Old Town Tbilisi has over the recent years gotten a huge “facelift.” These days, there´s local art shops, wine houses, small family-run guesthouses. You can spend hours getting lost in the old alleys and backstreet, just to find a small local bar or Kinkhali house. 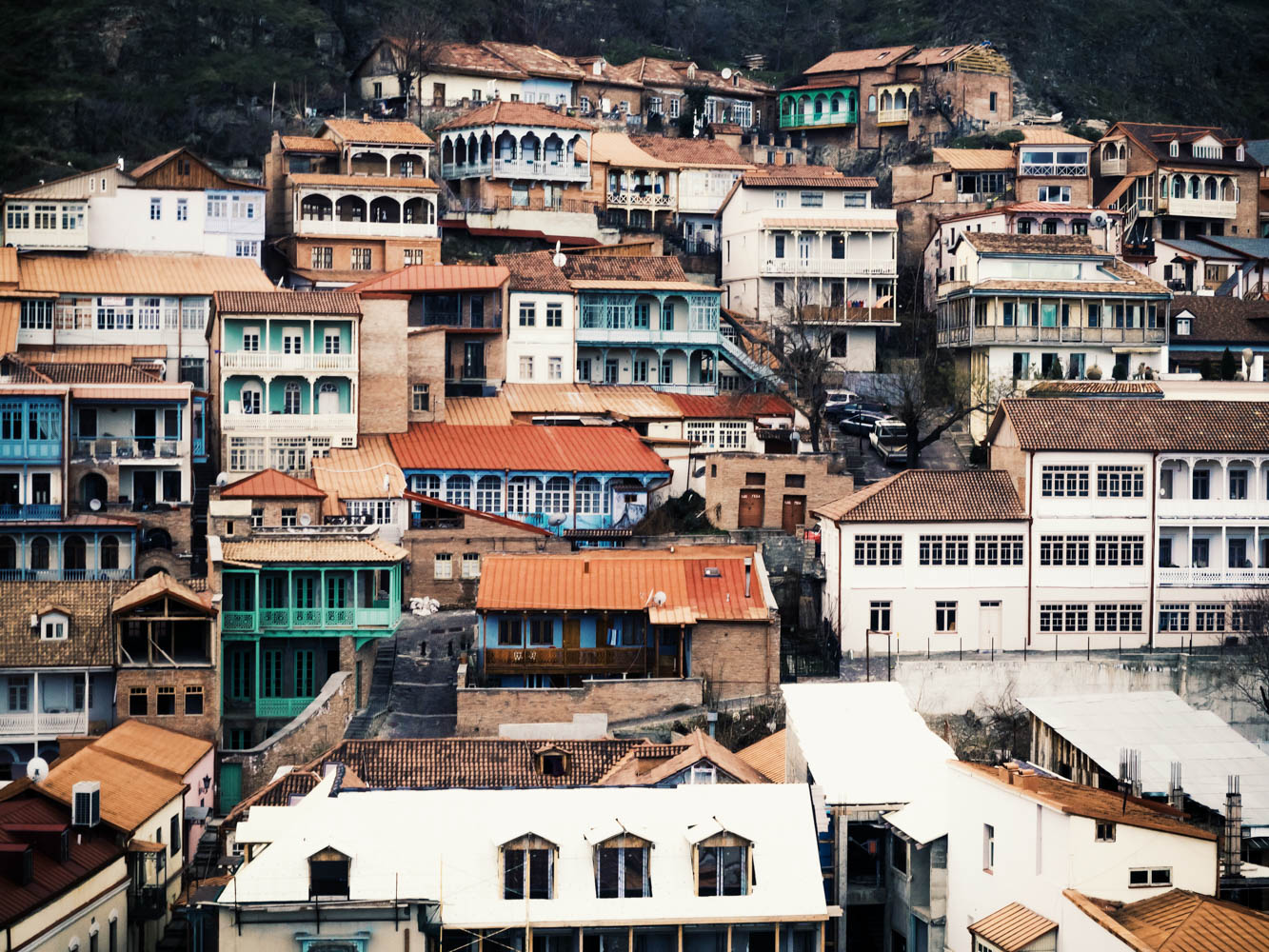 A tiny part of Old Town Tbilisi as seen from the cable car. 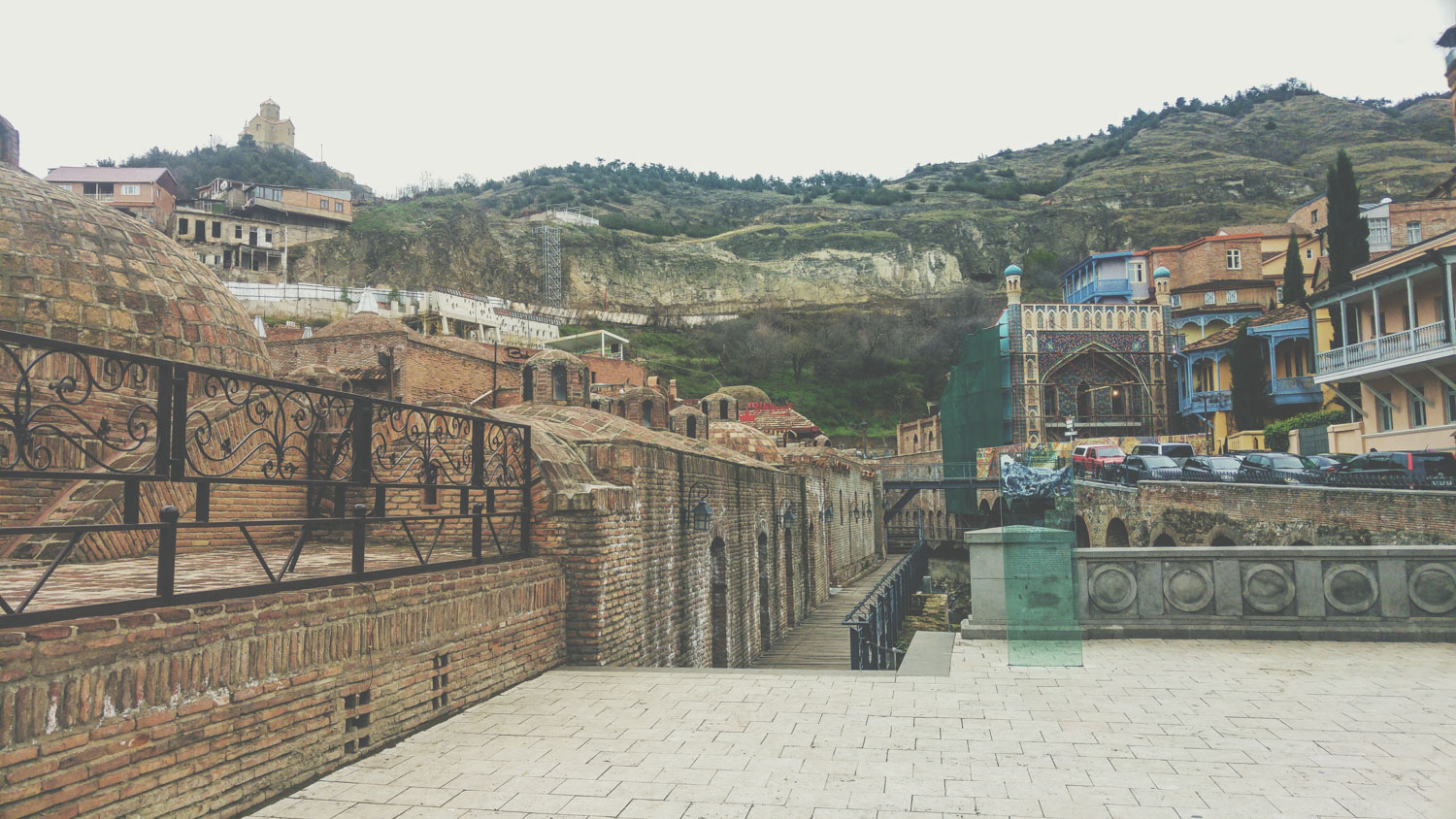 The Sulfur baths are on the left side and old town on the right side. 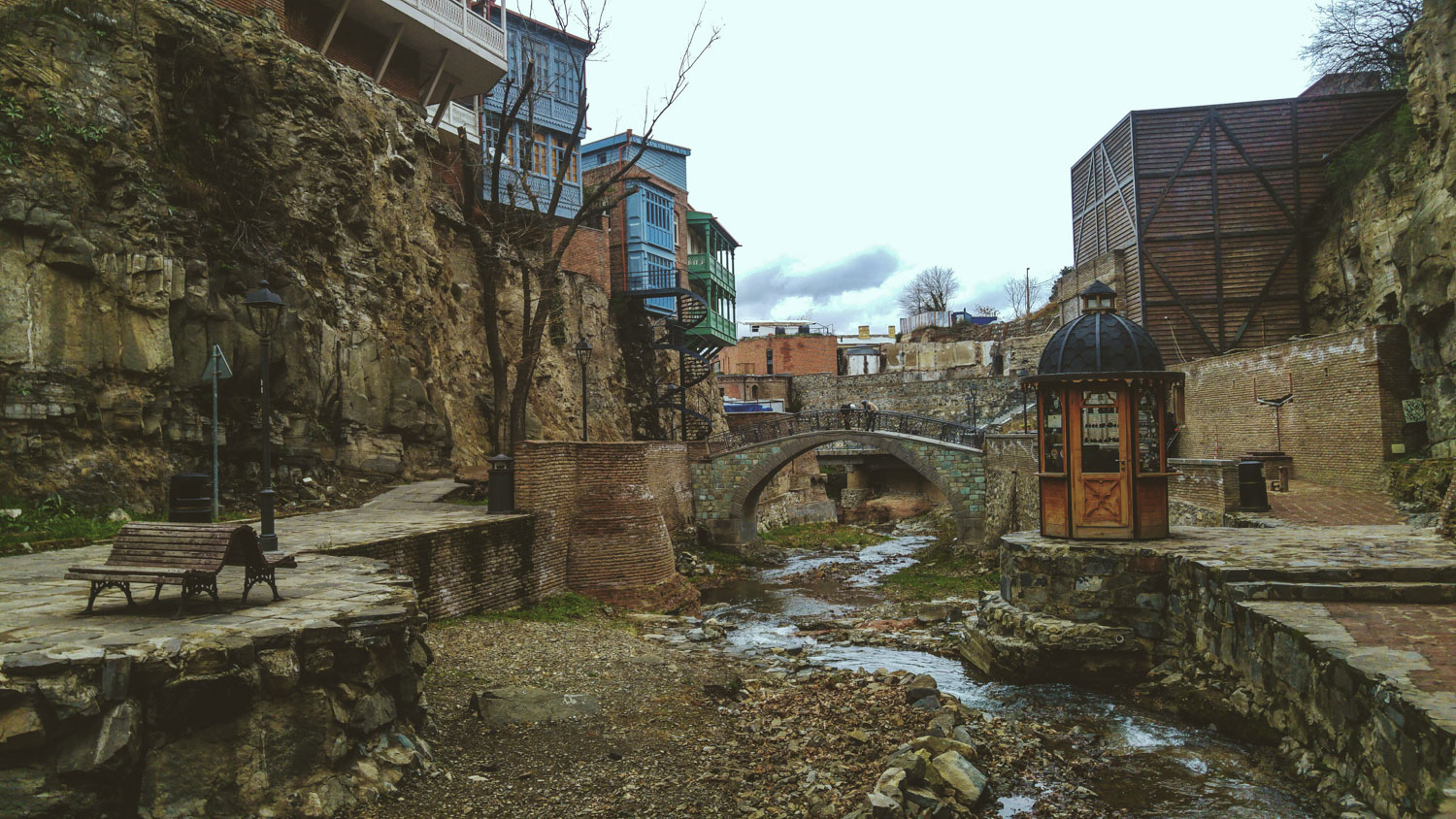 A complete restored part of the old town. 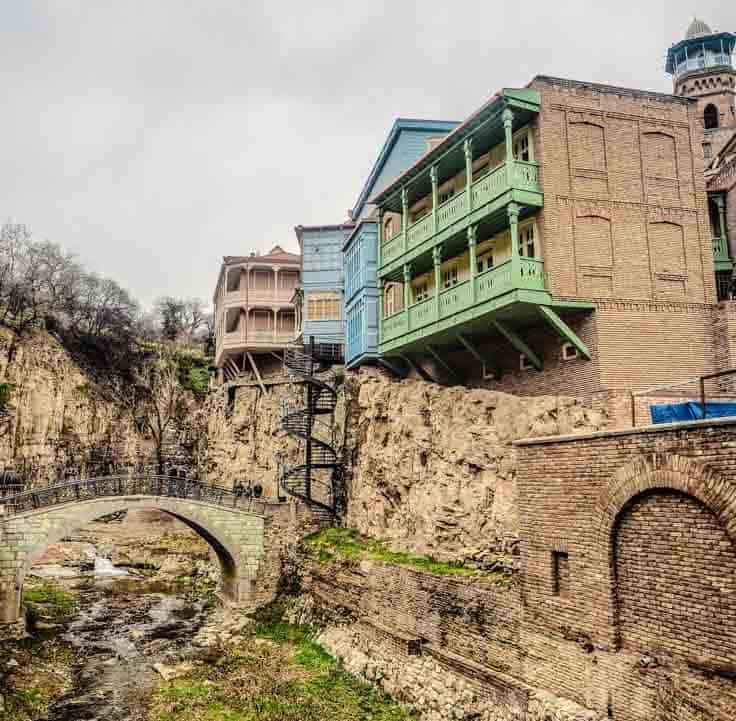 2. Take a Sulphur Bath in the old town Tbilisi. 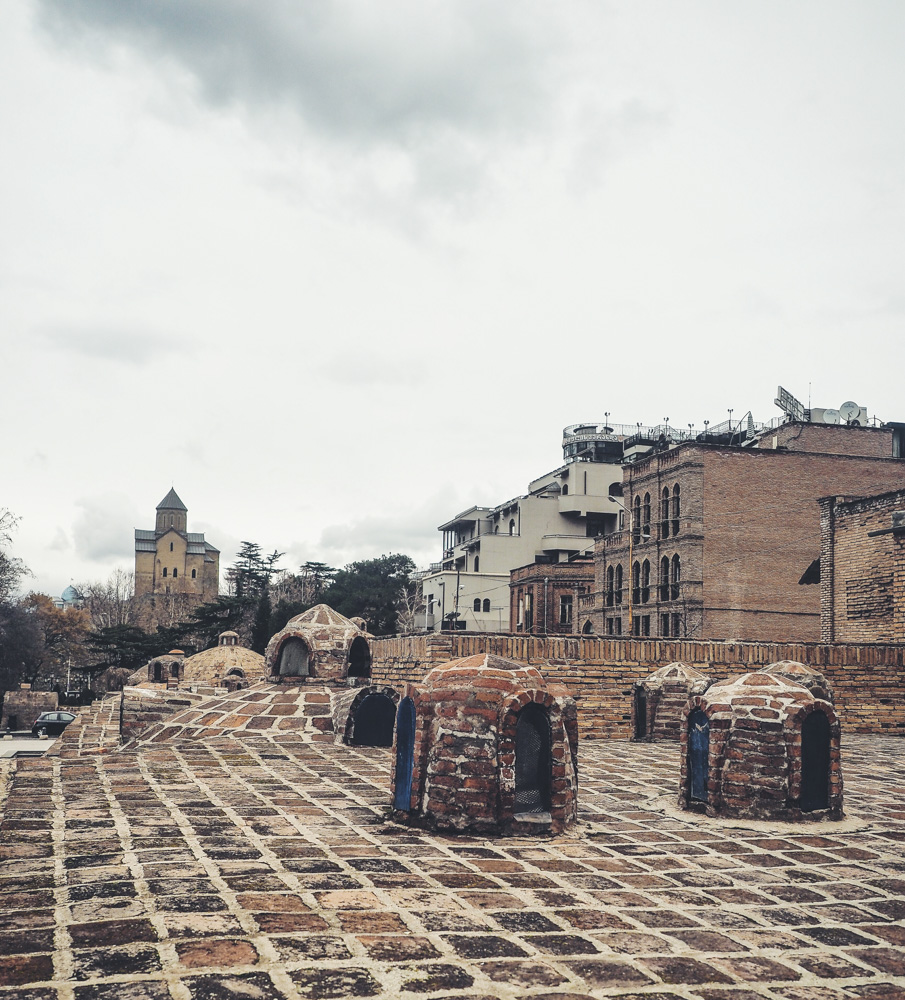 Vent´s to the sulfur bath for ventilation.

The famous Sulphur Baths are located in the Abanotubani district in the middle of the old town. The sulphur baths are an amazing place to relax for an hour or two, especially during the colder months of the year.

Most of the baths are open 24/7, and the price varies from 30 Lari for the cheapest private room to 100 Lari for a private room. The room quality varies as much as the price difference. There are also public rooms available for 3 Lari.

Click here to read a complete guide about Sulphur Baths.

While the expensive rooms are completely refurbished with both hot bath and cold bath and even a private sauna.
The cheaper rooms are more basic with an old Soviet look with just a hot bath and hot/cold shower.

The Sulfur bath has been a part of Tbilisi’s history from the city´s beginning.
The name Tbilisi comes from the Georgian word for warm ‘თბილი, that means “warm location”. 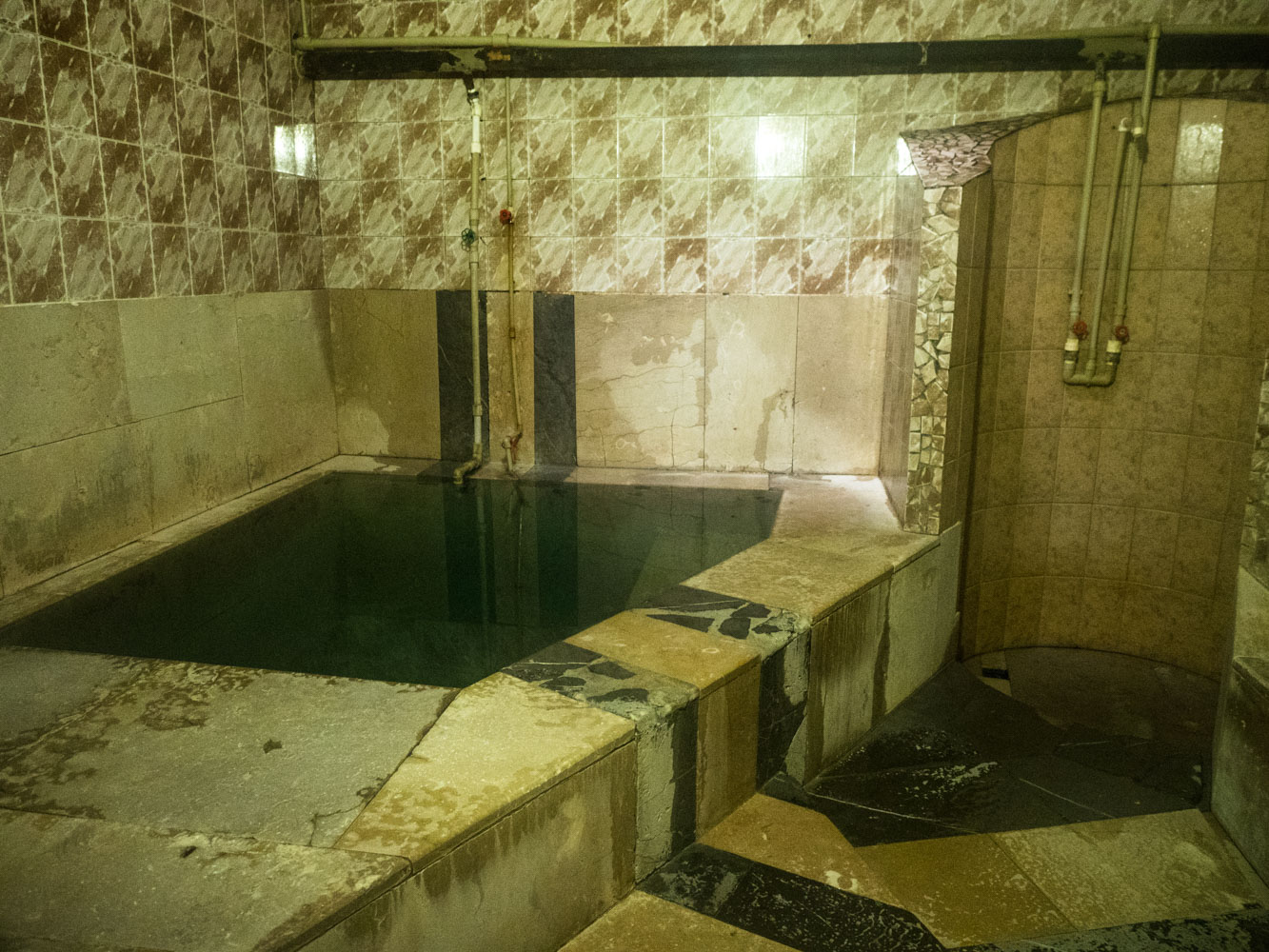 One of the cheaper Sulfur baths.

There´s no shortage of churches in Tbilisi or Georgia; you will never be far from one. The one you will see the most is the huge Holy Trinity Cathedral of Tbilisi or locally known as “Sameba”.

The construction of Cathedral was only completed back in 2004, so it doesn’t offer the same amount of history as most of the other churches in Tbilisi. But the Holy Trinity Cathedral is impressive in other ways.

It´s with its height of 97,5m the third largest Orthodox cathedral in the world only after the Saint Isaac´s Cathedral in Saint Petersburg and the Cathedral of Christ the Savior in Moscow. 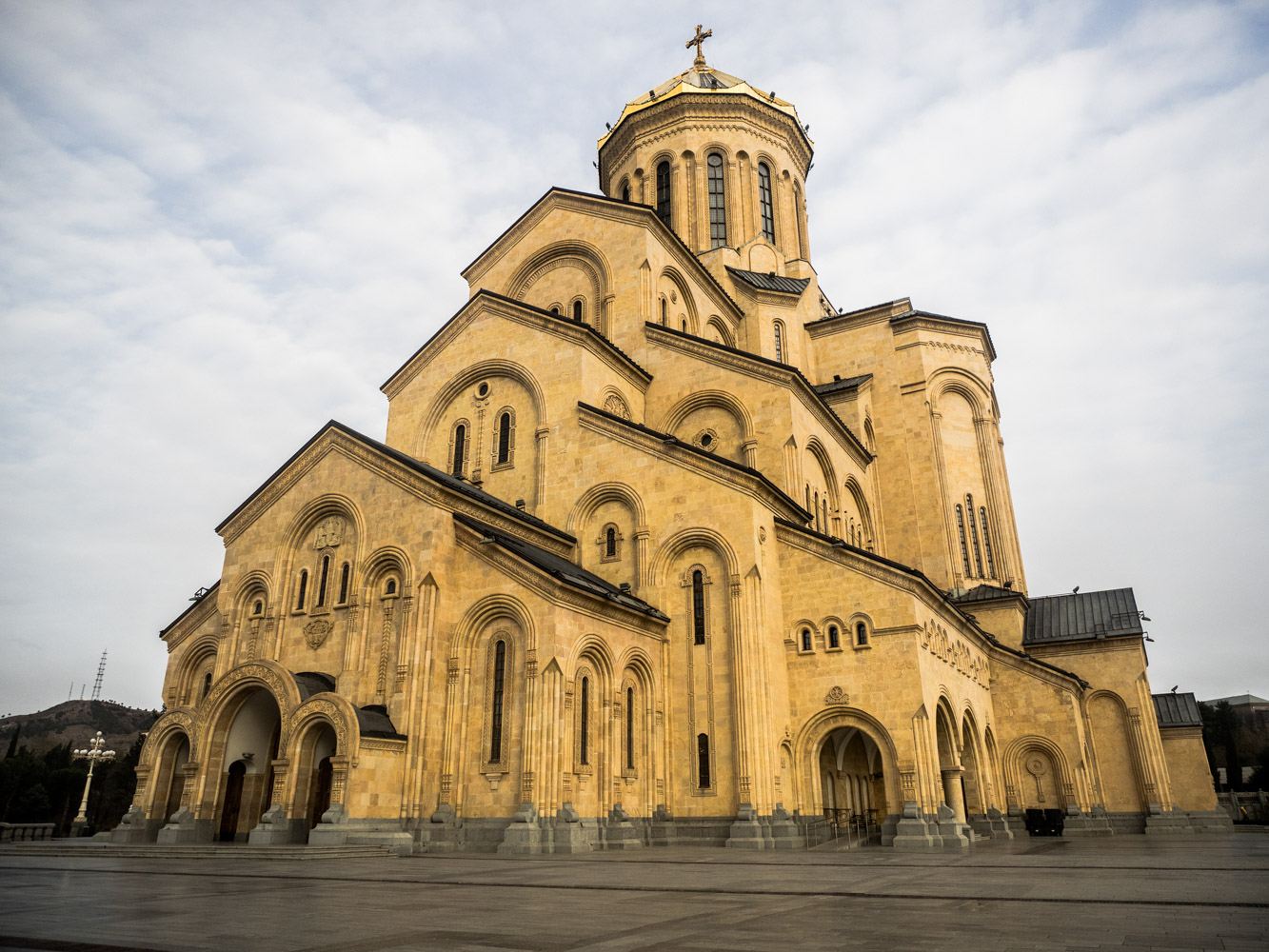 4. Visit the Mtatsminda Park for the stunning view of the city.

Mtatsminda Park is the highest point surrounding Tbilisi; the park has a small amusement park, a Paris wheel (that´s the highest point in Tbilisi), a lot of restaurants and small bars. It´s a popular hangout for the couples in the evening to enjoy the amazing view of the city landscape.

The park can be reached by bus 124 or by the Funicular railway. 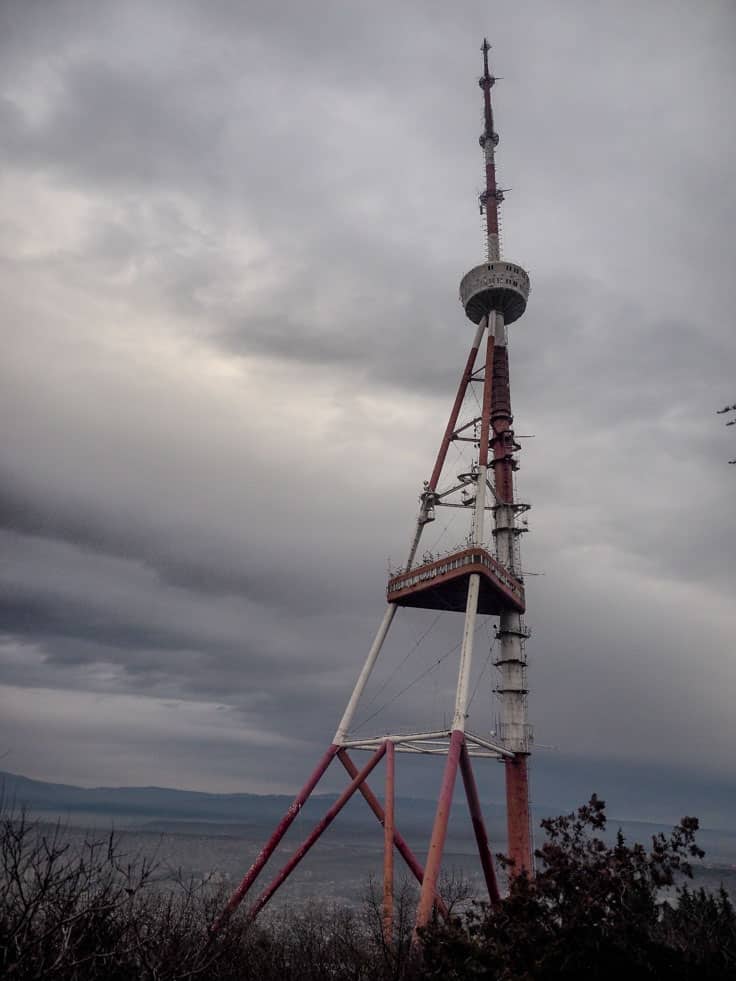 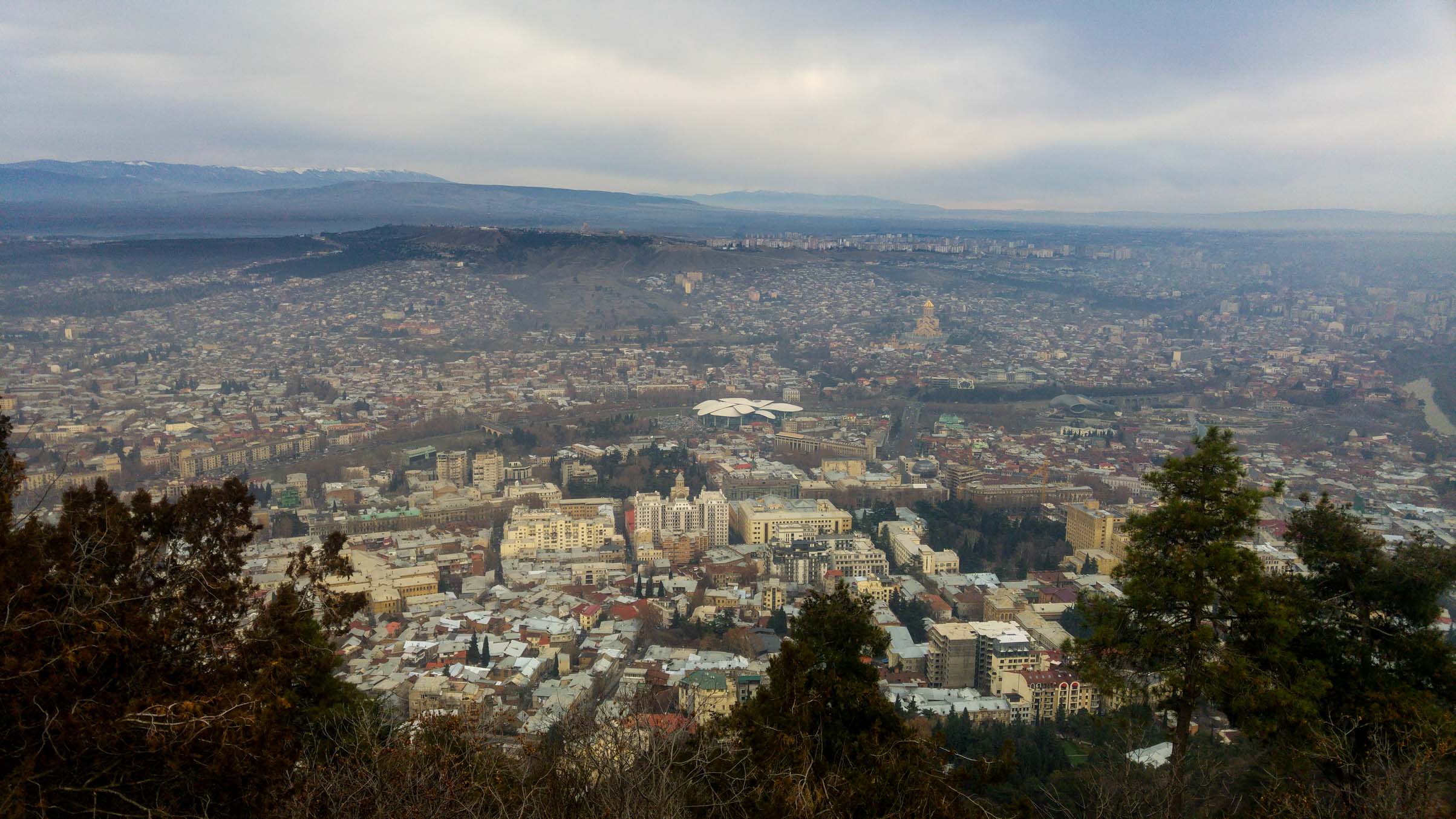 Tbilisi as seen from Mtatsminda Park.

The Paris Wheel and Tv Tower. 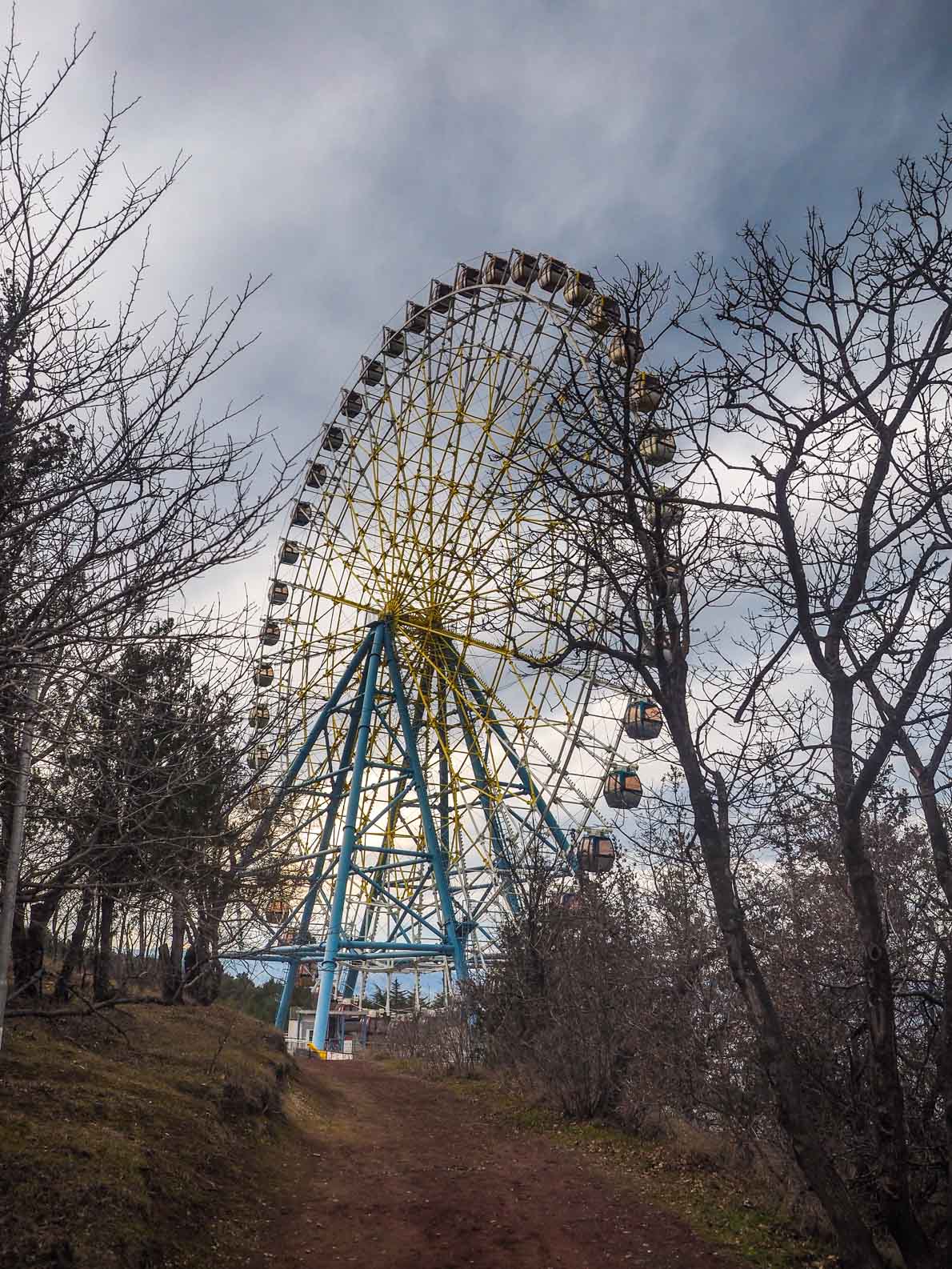 The Paris wheel in Mtatsminda Park 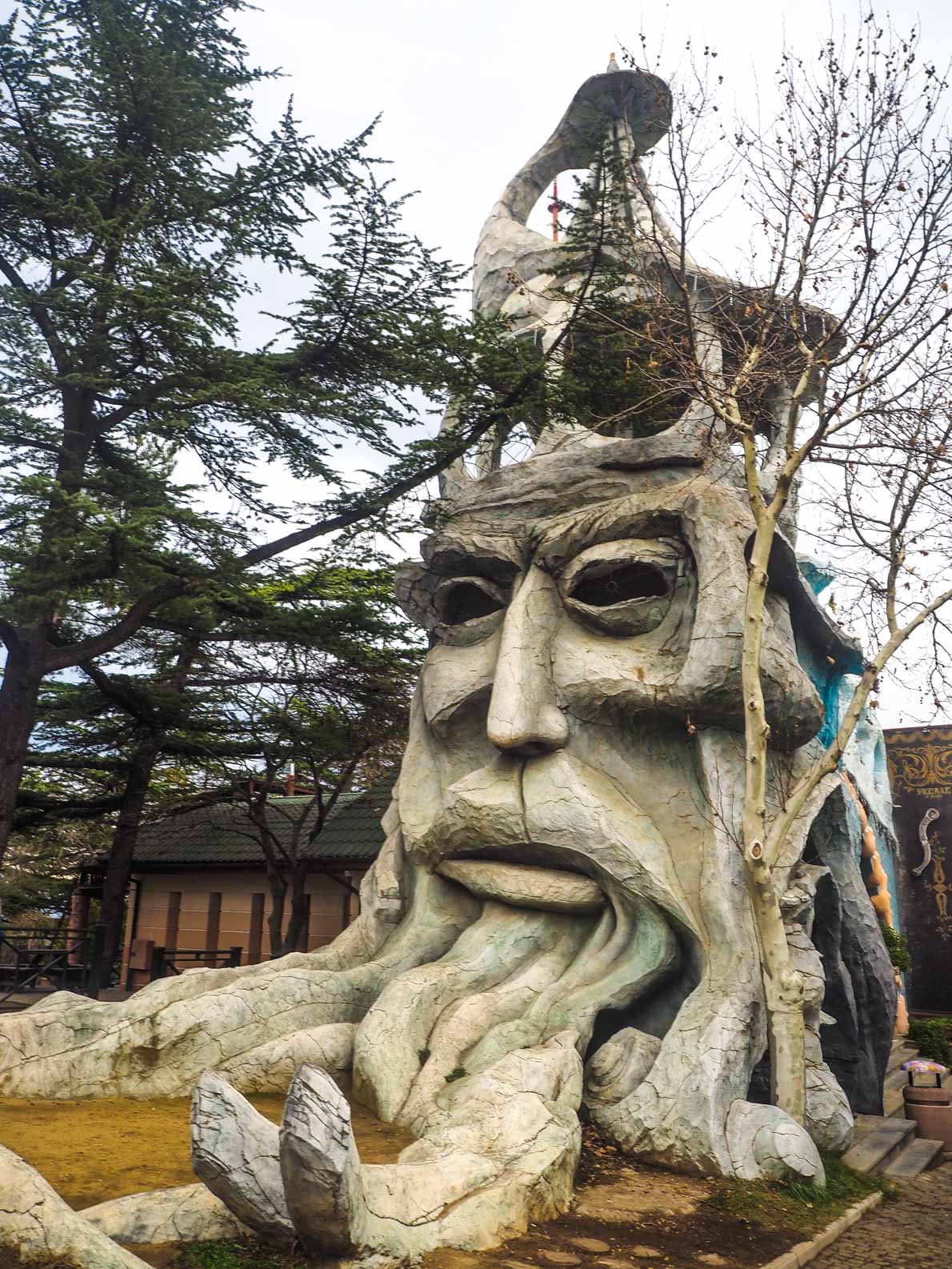 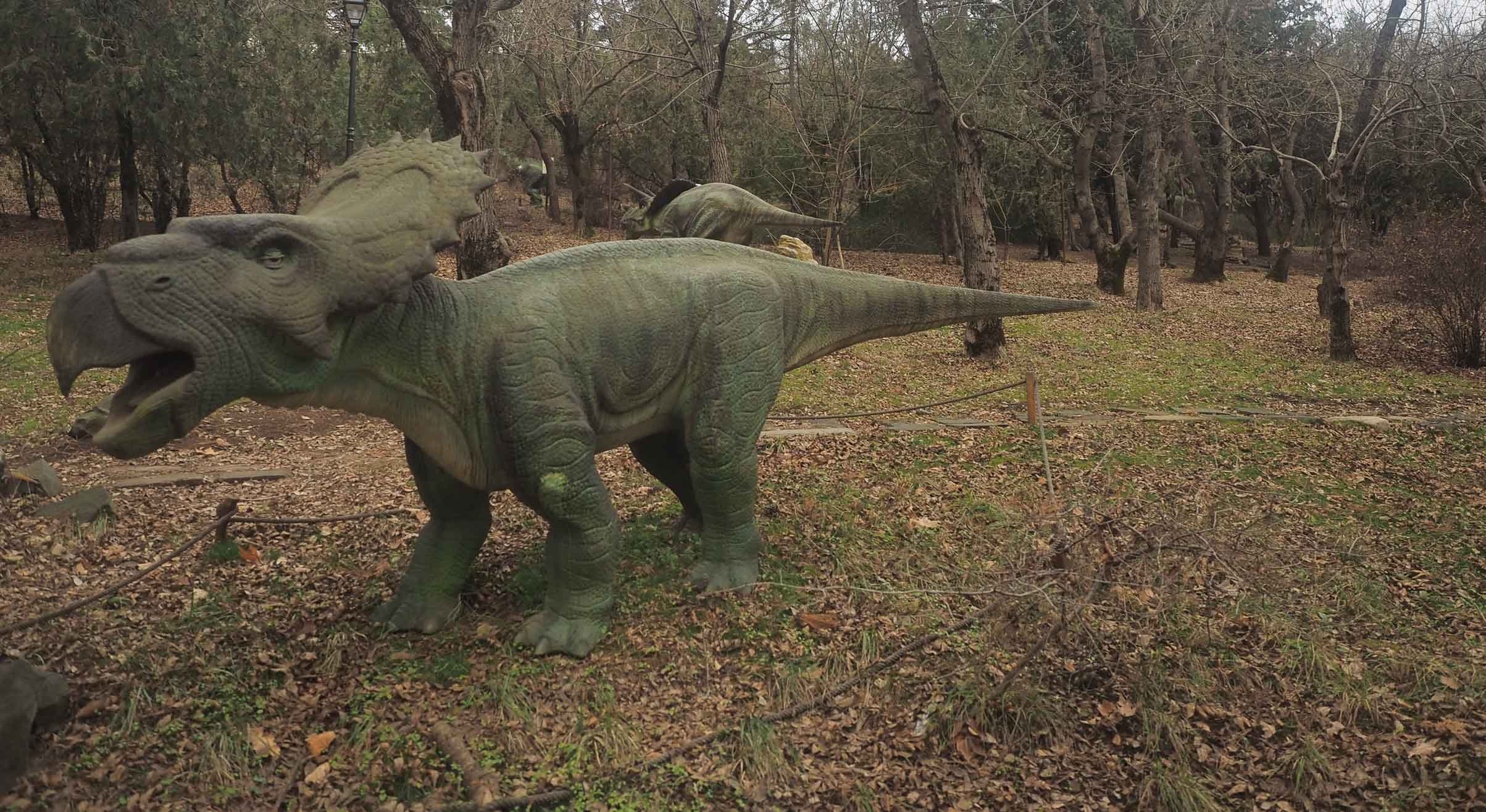 Georgian cuisine is vegetarian-friendly, and recently, a vegan cafe has opened up in the city. I’m neither vegan nor vegetarian, and I love the anti-vegan food. Georgian food, for me, is up there with Chinese, Mexican and Thai food. Cheese and meat are used in almost every dish.

While most of the food in Georgia like in all other old Soviet countries are heavily meat-based, but they also have some delicious vegetarian surprises. The best and most common dish which is also considered as the national dish is called Khachapuri, a “fluffy” bread with the centre of it filled with cheese in the middle and with an egg on top of the cheese again. The crust is a proper bread that you use to dip in the cheese. 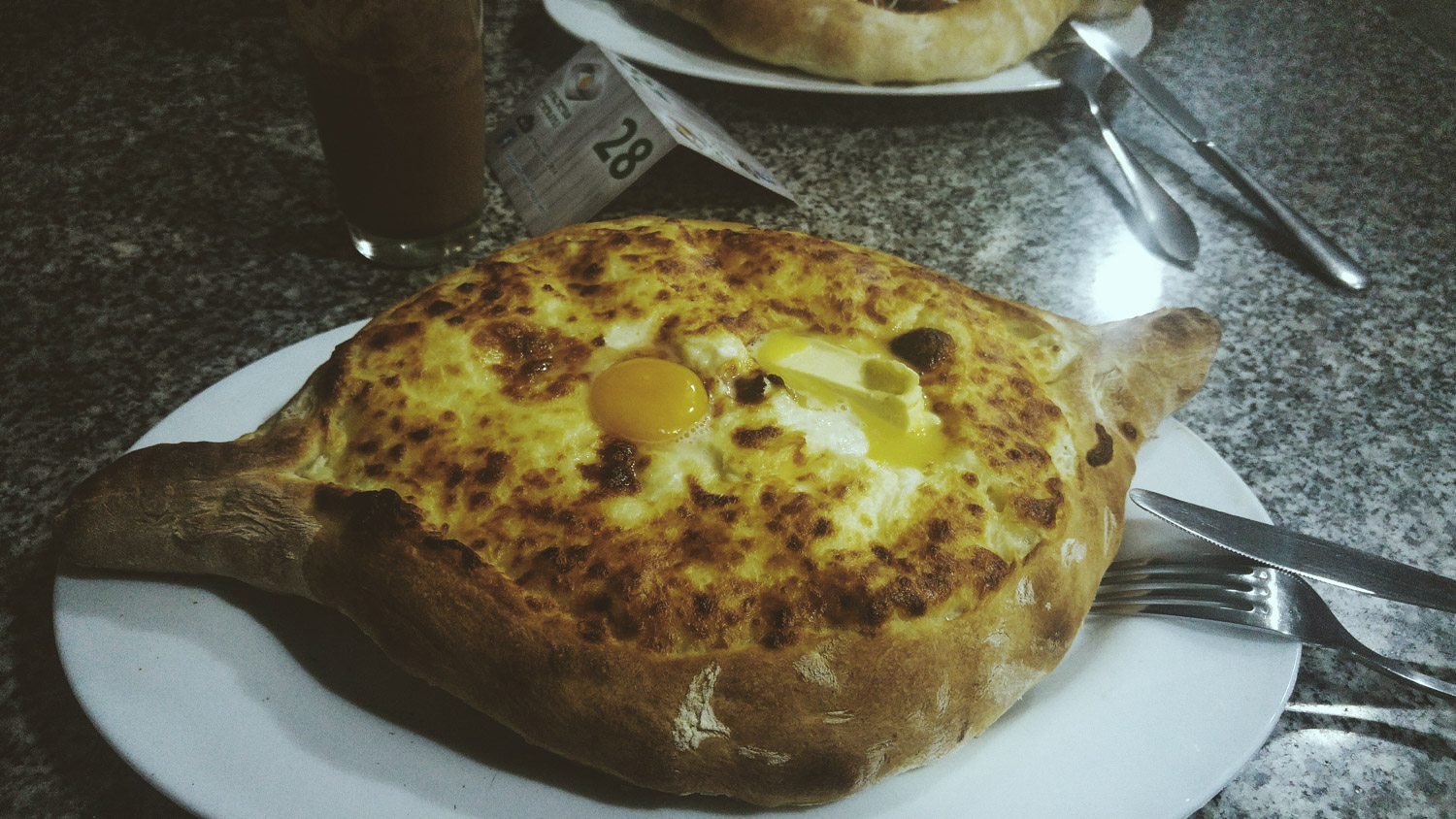 6. Take the cable car to the Mother, Georgia Statue.

The Mother Georgia is located on a high hill overlooking the city, you can either walk up, or you can take the cheap cable car from the eastern part of the city. The ride is only 1 lari. You will enjoy a panoramic view while riding over the old town.

You will enjoy a nice view of the city, similar to the top of Mtatsminda Park. You also visit the castle overlooking the city while walking back down: the Mother, Georgia Statue. 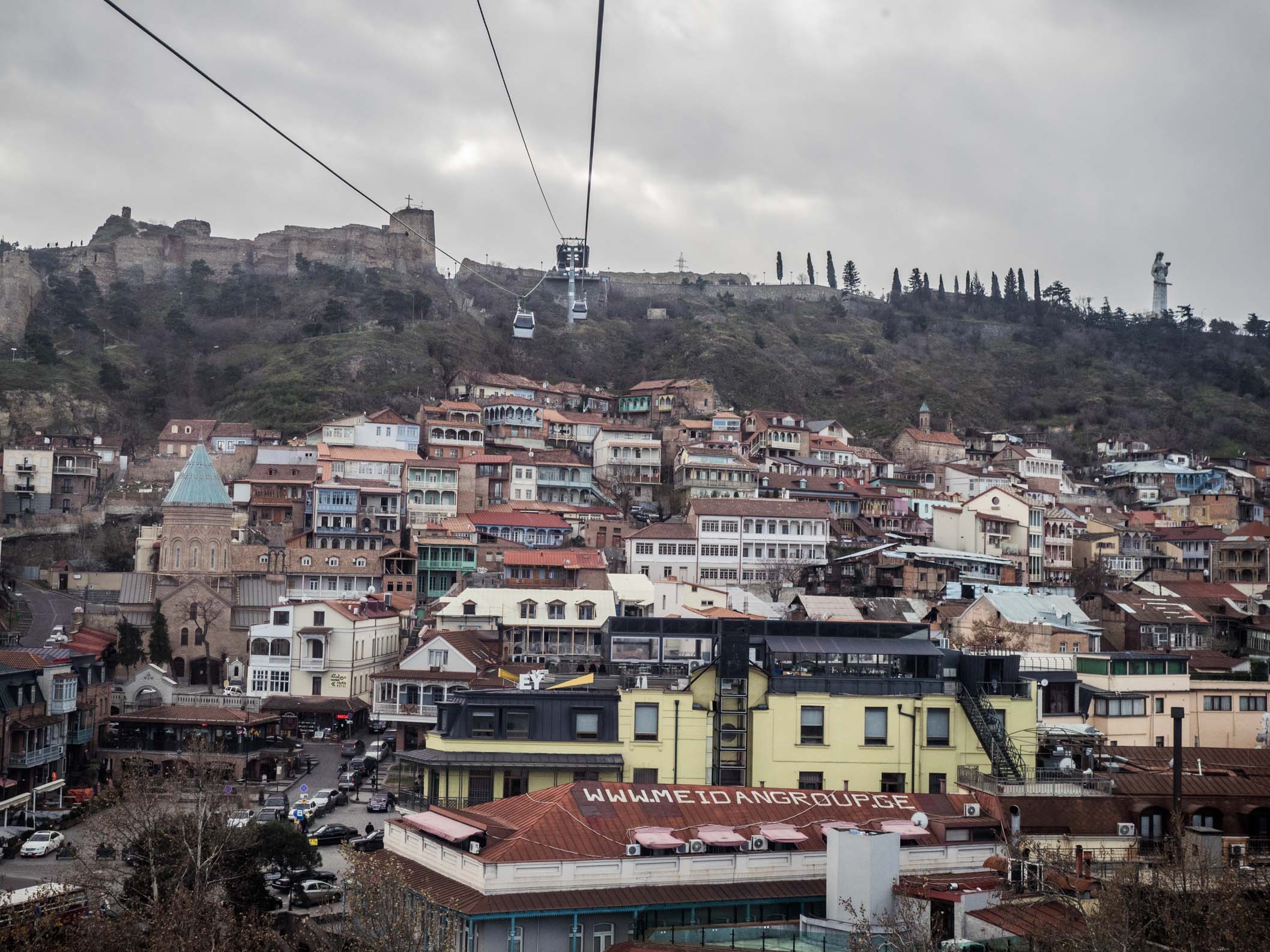 Driving across the old town 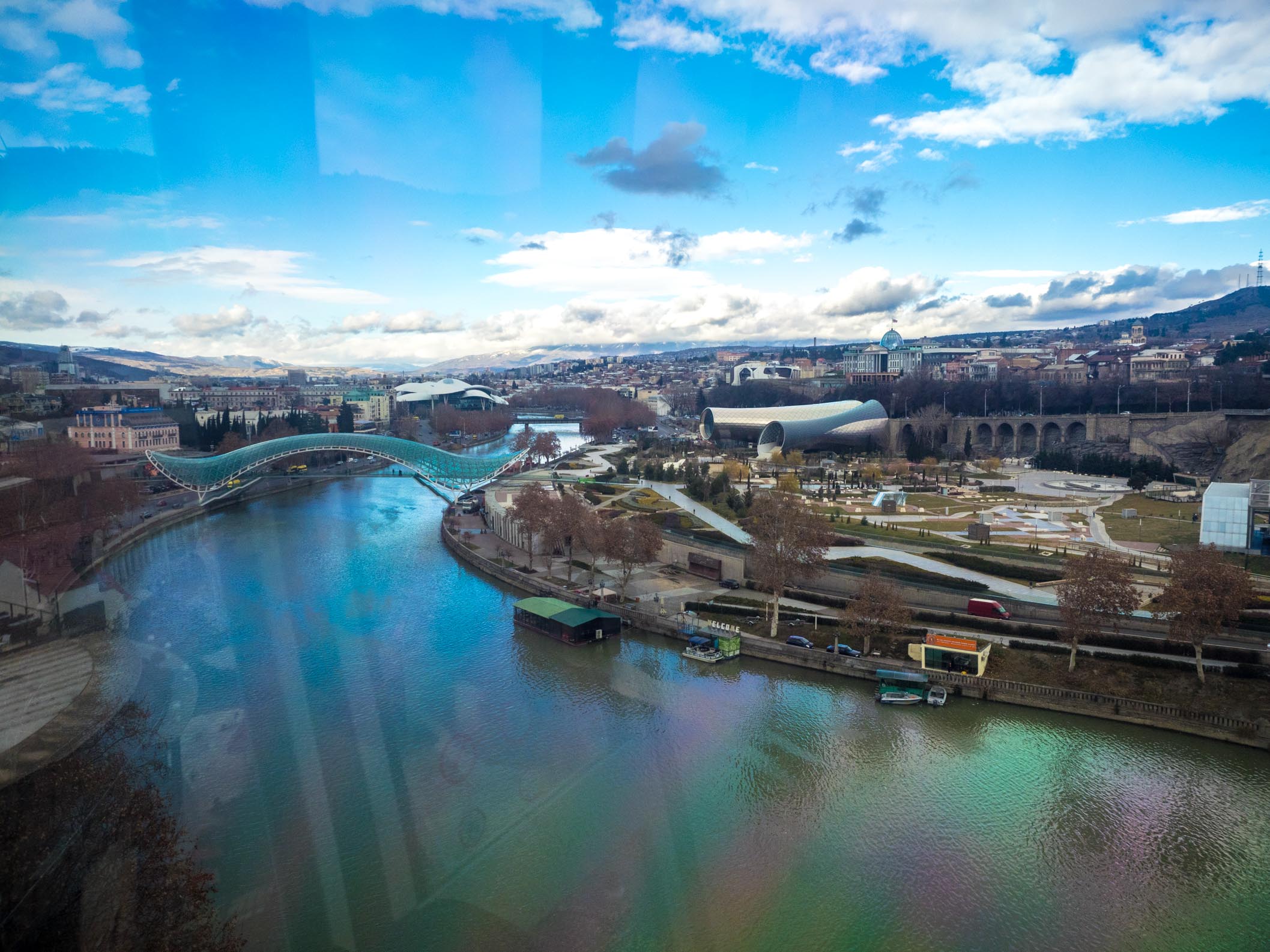 Taking the cable car across the river, There´s some strange modern architecture on the right side of the river.

There are two types of homemade candy´s in Georgia, Churchkhela, and Taklpi. These are sold from old babushkas on street corners to big shops on the main streets. It´s impossible to walk around Tbilisi without seeing a shop or two selling it.

Churchkhela is a sausage-shaped Georgian candy stick with walnuts on the centre. They are dipped in thick hot grape juice. The other local candy is Taklpi which are fruit rolls. There are numerous varieties, including plums, pear, apple and even kiwi. 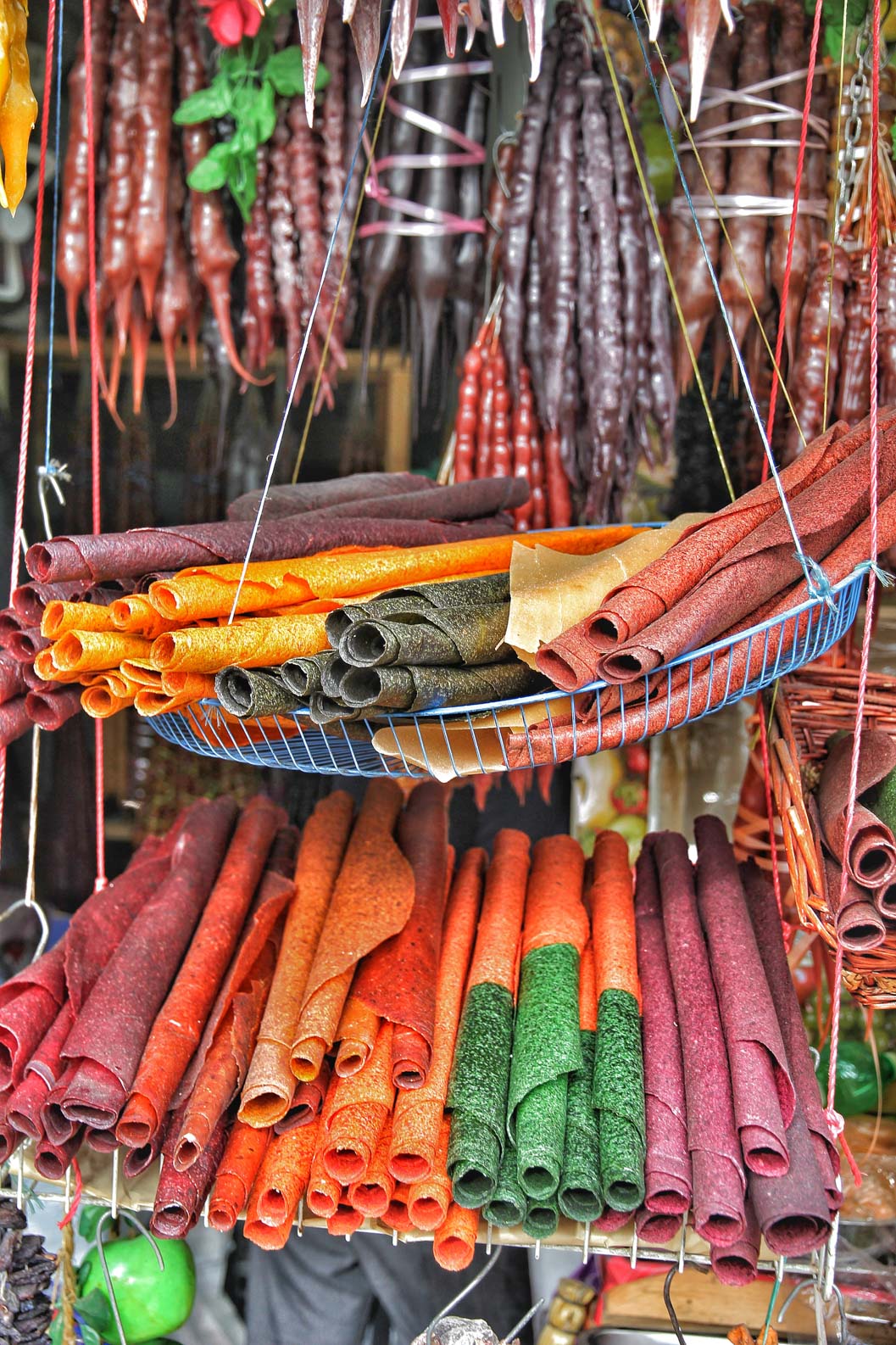 The leaning clock tower was created by the famous Georgian puppeteer Rezo Gabriadze.
Each hour a window opens at the top and an angel strikes the bell. Below the clock, a screen opens and shows the circle of life: boy meets girl, marriage, childbirth, and funeral. 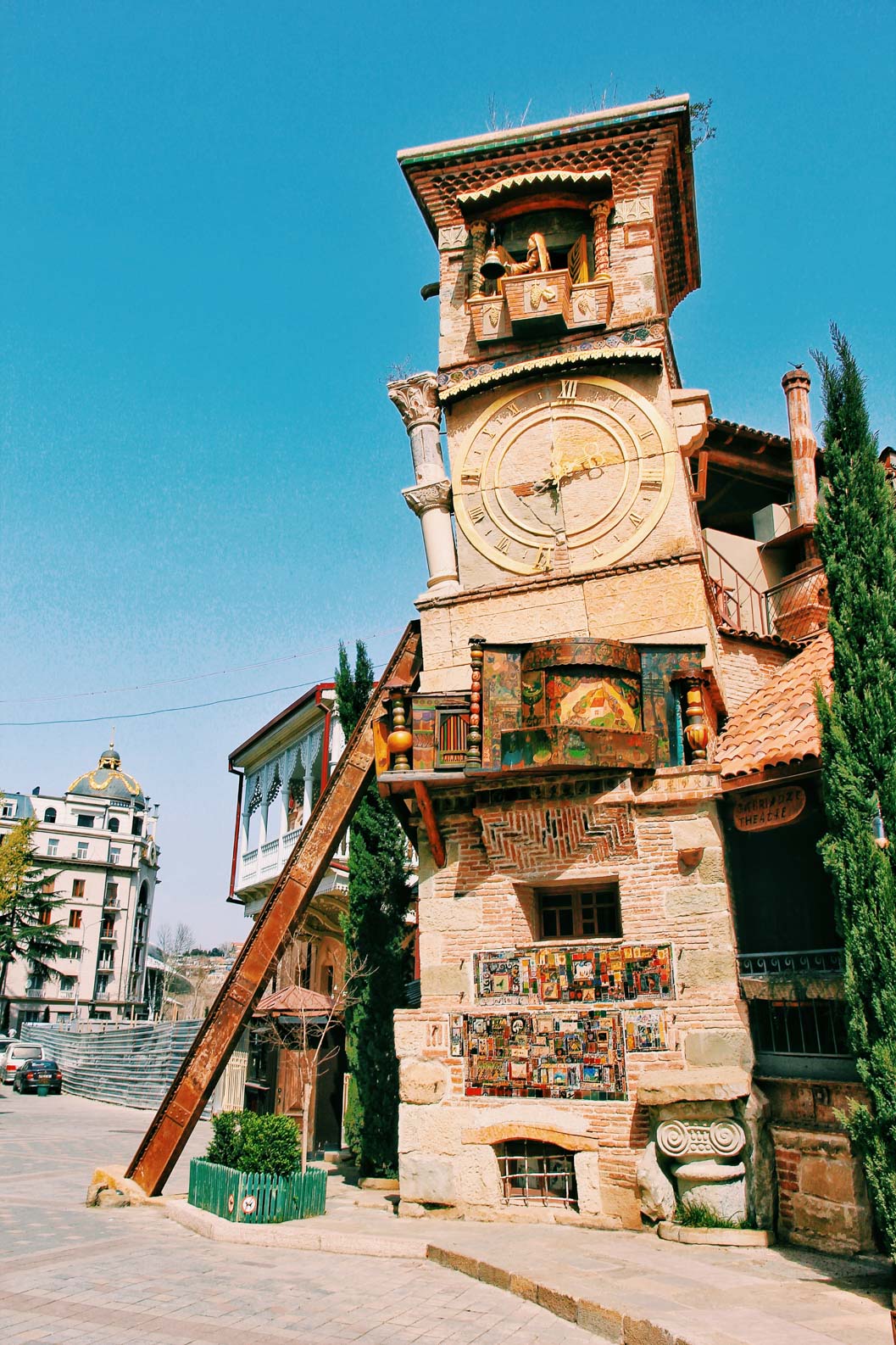 9. Check out the local nightlife.

Tbilisi is considered by many to be the best clubbing city in Eastern Europe and almost on a level with Berlin in western Europe. The partying and clubbing culture has become a lifestyle, and music is a sacred thing in the city. There´s also a club underneath the national football stadium. If you are not into clubbing, there are many local bars spread around the city, from small jazz clubs to pubs, frequented by the locals and foreigners, selling a glass of draft beer or glass of wine for 2lari.

Since Georgia is a relatively small country and Tbilisi it almost located in the central part, it is easy to make a day trip out of the city and still come back by evening.

I Would Also recommend you to visit Yerevan, the capital of neighbouring Armenia of you got time.

Directions to reach old Tbilisi from the airport –
You can take the N37 bus just outside the terminal which operates 24/7 leaving at 35-minute intervals and costs 0.50 Gel.

If your heading to Kutaisi next, the third largest city in Georgia, be sure to check out this post.

Looking for a hostel in Tbilisi or Georgia in General? Check out this page. Tbilisi, the capital of Georgia, for me, is one of the most fascinating cities in the world.