The Ultimate Guide to Jaipur The Pink City in India.

The Pink City is a place that rarely fails to excite. Everywhere you look is something to play on the senses. Here, a spice-plumed bazaar filled with asafoetida and ginger and pungent roots of all shapes and sizes. 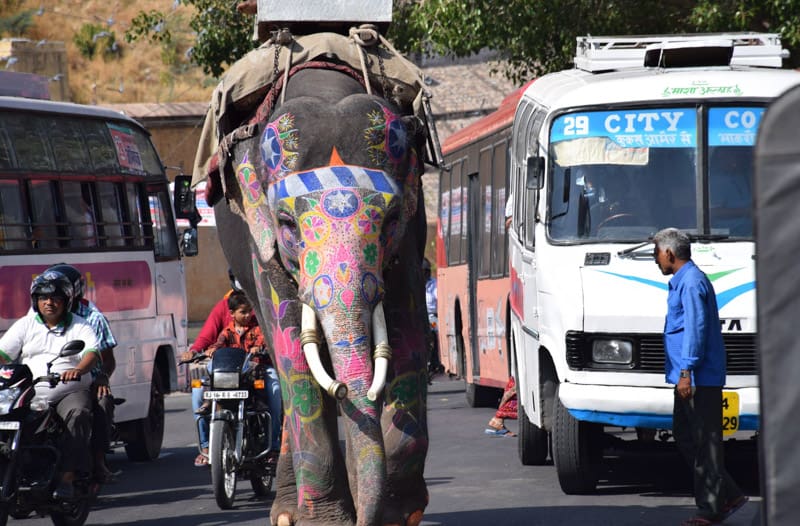 It´s common to see Elephants on the streets in Jaipur.

There, a human-packed chowk brimming with amber necklaces and precious gems. Grand palaces painted rose-red pop up on the street corners. Rickshaws jostle for space behind Mughal fortifications.

Majestic castles crown the hills on the edge of the Rajput desert. It’s a truly unforgettable place.

Jaipur is a perfect stop in a one month India itinerary.

Part of the so-called Golden Triangle, Jaipur is one of the most popular places to visit in northern India. It’s blessed with rich culture and craft traditions, from carpet-making to trinket carving. 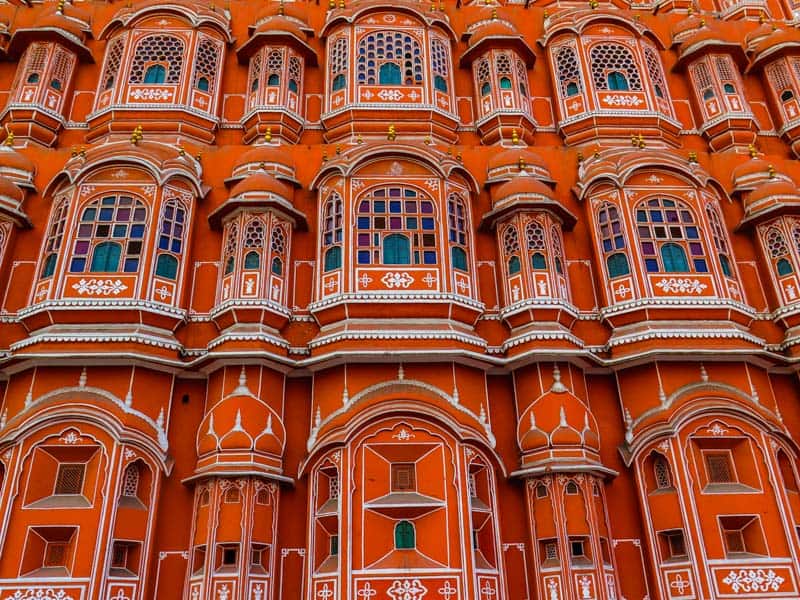 Some of the amazing windows on Hawa Mahal (Palace of Breeze). The landmark of Jaipur.

Where exactly is Jaipur?

Jaipur is a fast-growing metropolis of over three million people in the heart of northern India. It’s the capital of the huge state of Rajasthan, which ranges from the desolate wastes of the Thar Desert in the west where it borders Pakistan and to the outskirts of New Delhi in the east.

Jaipur itself sits closer to the country’s capital and the home of the Taj Mahal in Agra, forming a Golden Triangle of amazing places that’s now a major travelling route.

What to do in Jaipur.

You’ll be able to pick from a whole host of activities, so be sure to set aside enough time amid the Mughal spires and crenulated walls of this old Pink City… 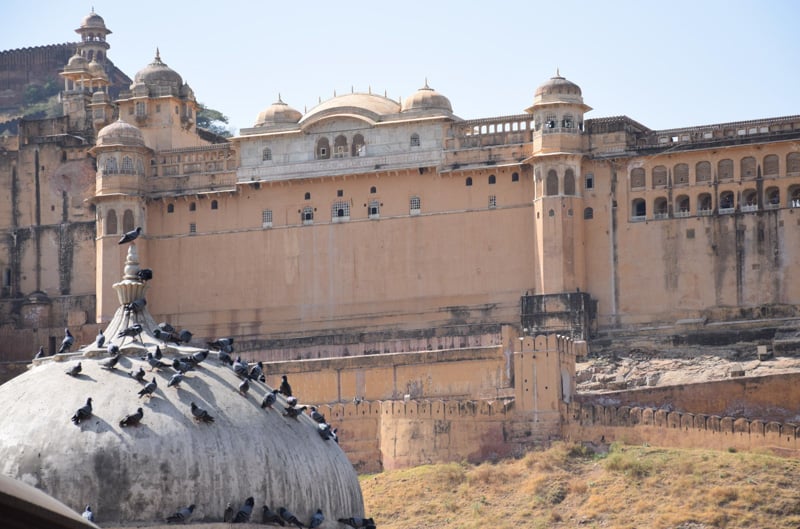 The main attraction for many in Jaipur is the Amber Fort. You’ll find it towering over the small village of Amer to the north. There, it’s crowned the dusty ridges of the Aravalli Range for over 1,000 years.
It’s been expanded and added to by various princes and invaders, with the most notable stylistic elements coming in the form of opulent Mughal palaces and the colourful designs of the great Ganesh Pol.

The Mirror Palace is another highlight, with its glimmering ceiling domes covered in reflective glass. 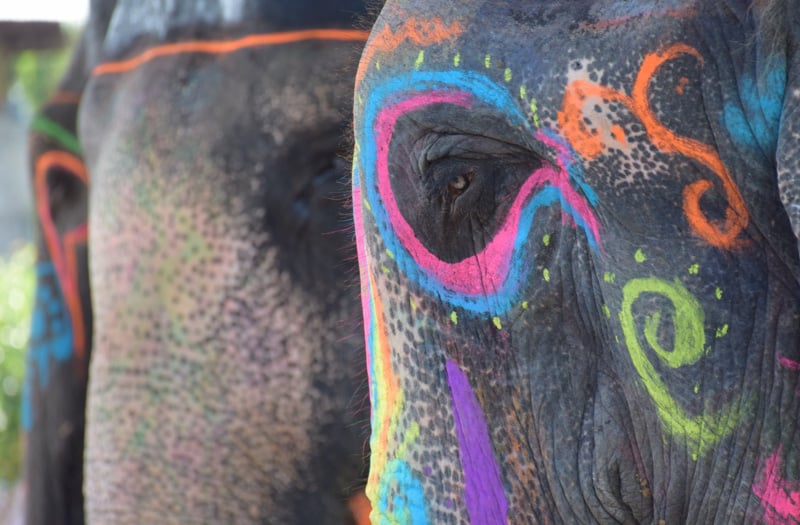 A decorated Elephant in Jaipur

Elefantastic was one of the first true elephant sanctuaries in India. It’s garnered a reputation for the ethical treatment of the big beasts, which have been rescued and raised on the farm.

Located just outside of Jaipur, the complex has houses specially designed to host the families of mahouts (elephant handlers) and their big-eared compadres.

Groups can come and learn all about the diet and lives of elephants, understand the challenges of elephant tourism in India, and even participate in traditional elephant art and washing. Lunch is at the owner’s home, cooked with plenty of capsicum by his mother. 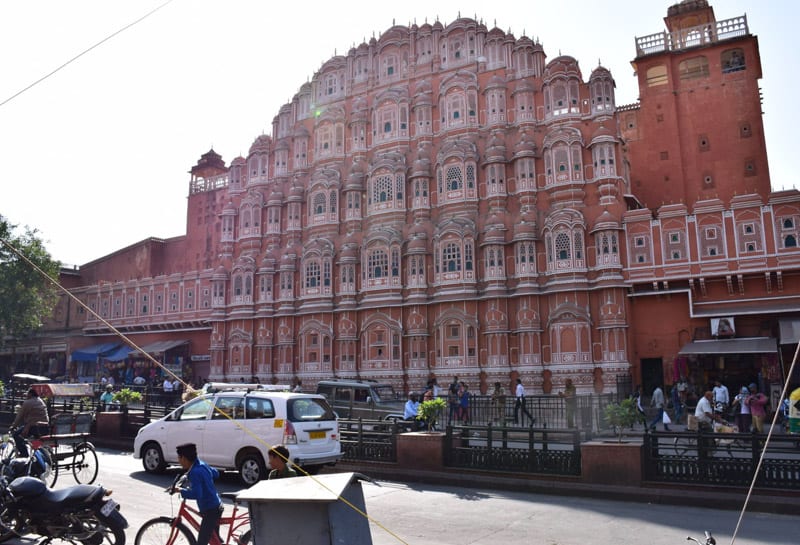 Hawa Mahal the landmark of Jaipur. 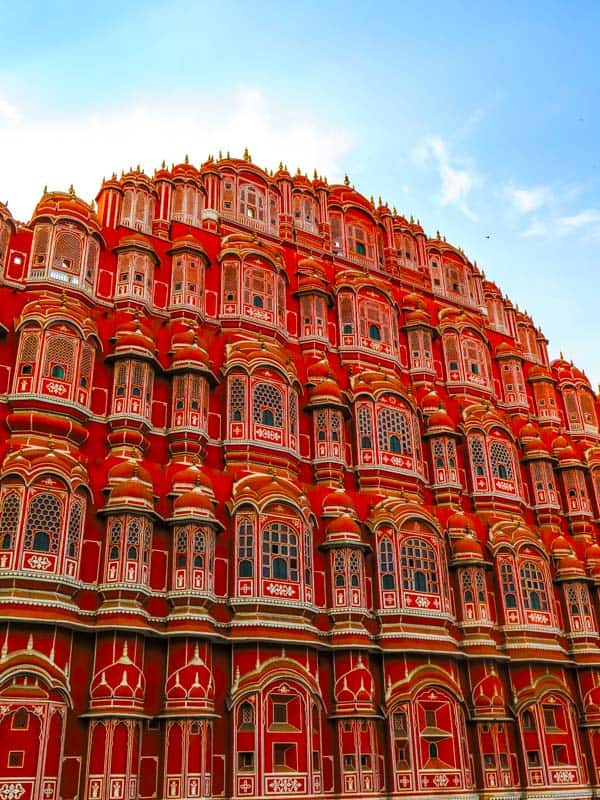 Hawa Mahal the landmark of Jaipur

There’s arguably no more an iconic structure in the centre of Jaipur than the Hawa Mahal. Glowing bright pink above the bazaars of the old city, it was constructed under the reign of Maharaja Sawai Pratap Singh back in the late 1700s.

The main drawcard is the latticed façade that forms the back of the palace on Hawa Mahal Road. Head there to spot the countless small slit windows that are worked into the building.

They were for courtesans to spy on the city from within, but also helped draw in cool air for natural conditioning. 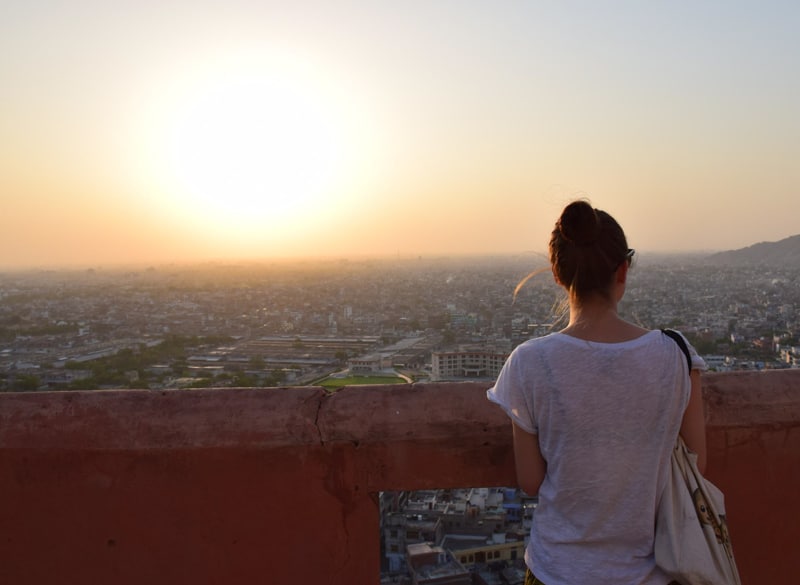 Sunset from Galwar Bagh also known as the Monkey Temple

Known more casually as the Monkey Temple, Galwar Bagh huddles under the mountains on the eastern side of Jaipur. It gets its moniker from the troop of naughty macaques that guard the entrance.

If you can get past them, you’ll encounter a series of holy water pools. They’re naturally occurring and draw thousands of Hindu pilgrims each year.

The shrine itself is a stunning showcasing of Indo-Persian design, complete with geometric patterns and spiked domes.

There’s also a high lookout point with sweeping views of Jaipur. Head up to that to watch the sunset while smelling the incense from the temple halls below.

Jaipur has been a trading hub of South Asia for centuries. Hawkers of painted puppets, Himalayan salt rock, Kashmiri wools, precious gemstones, carpets, tobacco and camels all came to coalesce in the energetic bazaars at the town’s heart.

Fast forward to the 21st century and not too much has changed. Past the Ajmeri Gate and in the middle of the city is where you’ll find the lively markets.

There’s a street dedicated to almost everything you can think of.

Choose Johari Bazaar for twinkling gold necklaces and jewellery. Head to the Tripolia Bazaar for saris and flamboyant fabrics. Hit Nehru Bazaar for handmade bags and totes. The whole place is also a street-food mecca, so ready the taste buds!

Just on the outskirts of the city centre of Jaipur is a small palace built in Rajput style architecture in the middle of a lake, while during the dry season the lake will try up so are the lake full of water after the summer monsoon season. 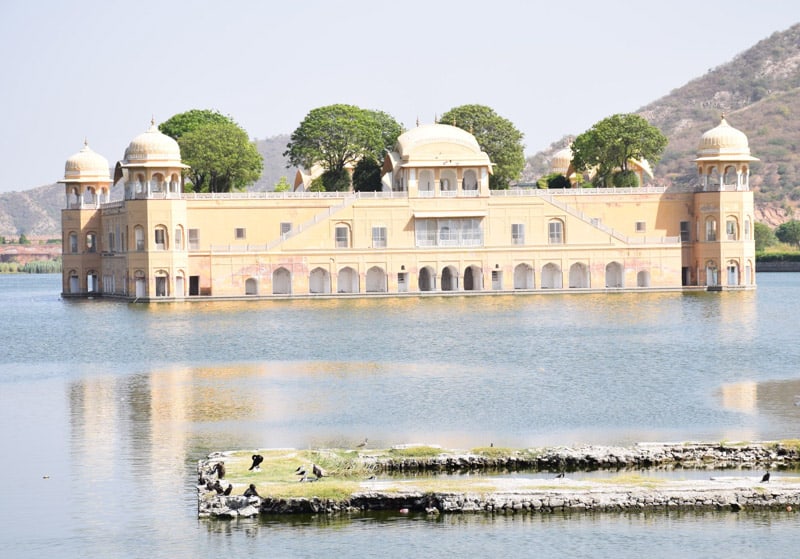 Jal Mahal in the middle of Mansarovar lake.

Take a Day Trip To Chand Baori The Stepwell from Batman: The Dark Knight Rises.

Considered one of the best-kept, hidden gems in the state of Rajasthan is the stepwell of Chand Baori located about 93km/58miles east of Jaipur.

Chand Baori has a whopping 3,500 steps that descend to the well, spanning thirteen stories in height, extending about 30 meters into the ground. While it´s been well known by the locals, so wasn´t ut before Batman The Dark Knight Rises that made the stepwell famous outside Rajasthan. 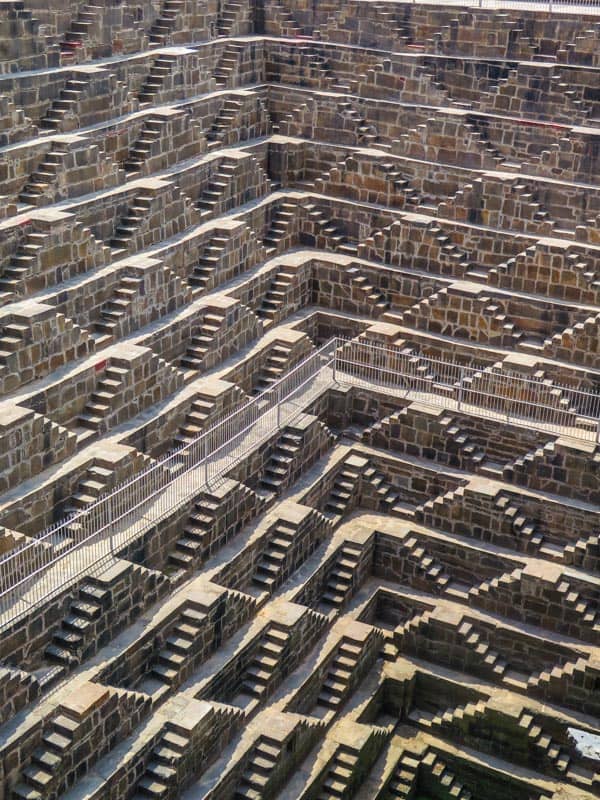 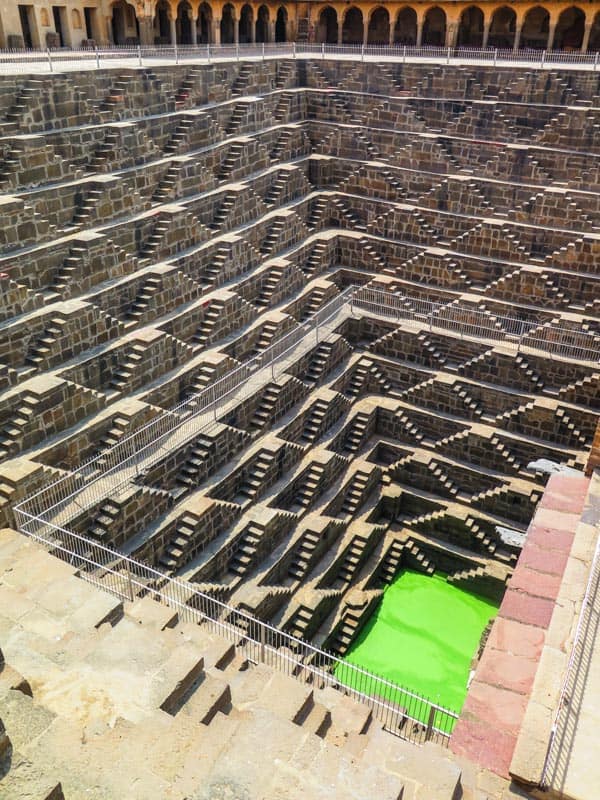 Take A Day Trip To Ranthambore National Park, one of the best places to see wild Tigers in India. 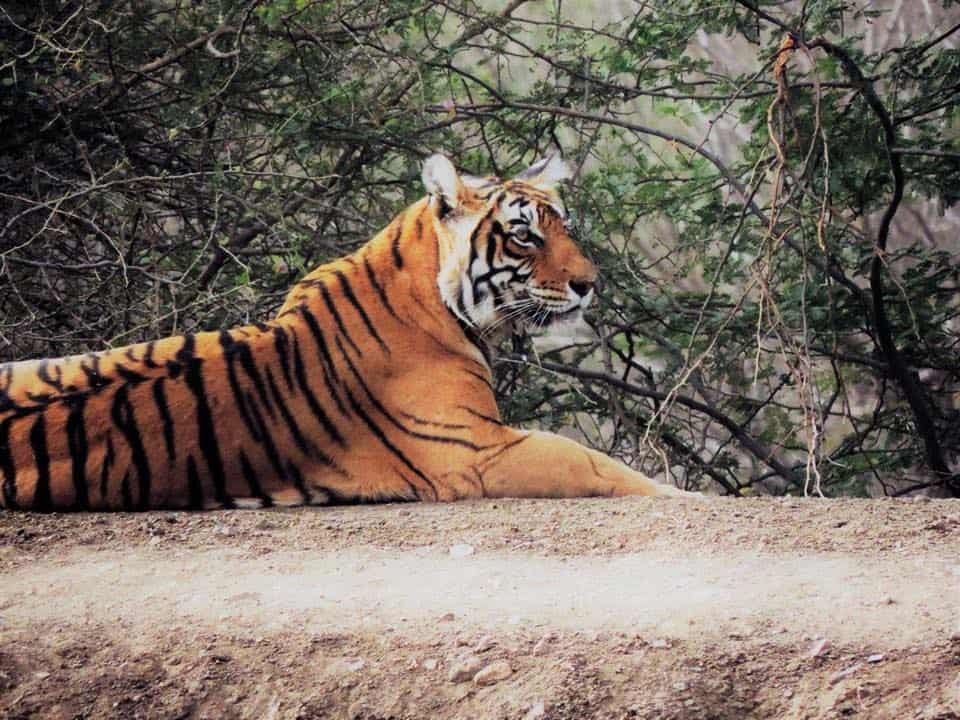 The Female tiger Ladli (a Hindi word meaning “the loved one” or “the dearest one”).

There are some incredible national parks in the north of India, where the striped black and yellow big cats can be seen. One of these is Ranthambore National Park in Sawai Madhopur District, Rajasthan State.

Ranthambore is often considered to be the park with the most significant chance of seeing Bengal Tigers in India. Ranthambore National Park is 3hours south-east of Jaipur.

How to get to Jaipur.

Jaipur is the capital of a whole Indian state, which makes it an important transportation hub. The upshot is that it’s also easy to get to for any budding travellers.

Direct flights to the local Jaipur International Airport (JAI) come in from all over India and the rest of South Asia. There are even budget carriers who run the route to the city from Bangkok and Dubai.

They’ll take you to the terminals that sit in Sanganer, some eight miles south of the central district.

For sure the most entertaining way to get into town is on the railway. There are short links from Agra and Delhi that take just a couple of hours.

But you’ll also find loads of long-distance and overnight options that offer that sought-after Indian Railways experience. They arrive every day from Jodhpur, Jaisalmer, Udaipur, Mumbai, Mysore, Kochi – the list goes on!

Hotel to stay in Jaipur.

Jaipur is bursting with places to stay. From boutique B&Bs in quaint haveli homes to big chain hotels with swimming pools to bargain hostels, you’ve got oodles to choose from.

Try to be within striking distance of the bazaars and the old town for the best location.

A hostel with frills, Moustache Jaipur, focuses on wallet-friendly rooms and dorms with a few extras on top. Firstly, the interiors are chic and stylish, with arty wall murals and a touch of East London about them.

There’s a comfy communal sitting area with air conditioning and futons and a flat-screen TV. And you’ve got that pool on the roof, which is perfect for chilling after a long day of haggling through the bazaars.
A slight downside is the location, but a cheap tuk-tuk is all that’s needed to take you to the main sights.

If you’re after real immersion in the buzzing bazaar of Jaipur, the Khatu Haveli could be a great pick. It’s located in a gorgeous mansion that dates back centuries, complete with open courtyards and carved frontispieces.
The interiors come replete with whitewashed walls covered in murals of arabesque design. The rooms have large double beds and arty touches. The best part, though, is surely the location. Khatu puts you just a stone’s throw from the Hawa Mahal and the markets.

Hidden in the hazy foothills of the Aravalli Range on the eastern end of the city is the uber-luxurious Oberoi Rajvilas. A fully five-star resort, there’s no limit to the opulence.
A whopping 32 acres of manicured gardens surround the hotel, opening onto hidden swimming pools and groves of palm trees. Inside, you’ve got a mix of colonial Raj architecture and classic Rajasthani design.
And there’s an acclaimed restaurant, serving fusion Indian food with a creative, fine-dining edge.
There’s plenty more to be said about Jaipur! If you can think of anything to add to this ultimate guide, we’d love to hear about it in the comments below! 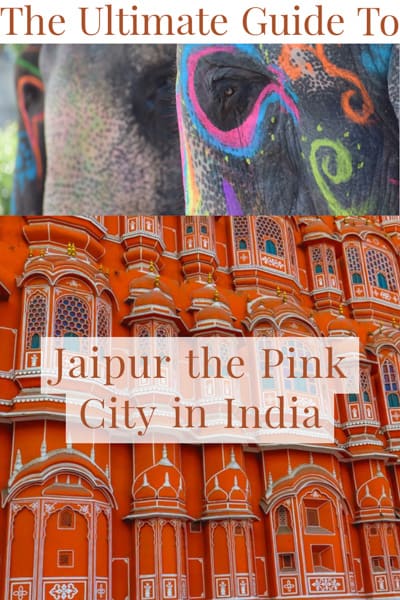 Skopje Everything You Need To Know Before Going
← Previous
The Ultimate Guide To Udaipur The City Of Lakes In India
Next →
Click here to cancel reply.