An introduction to Mirissa. 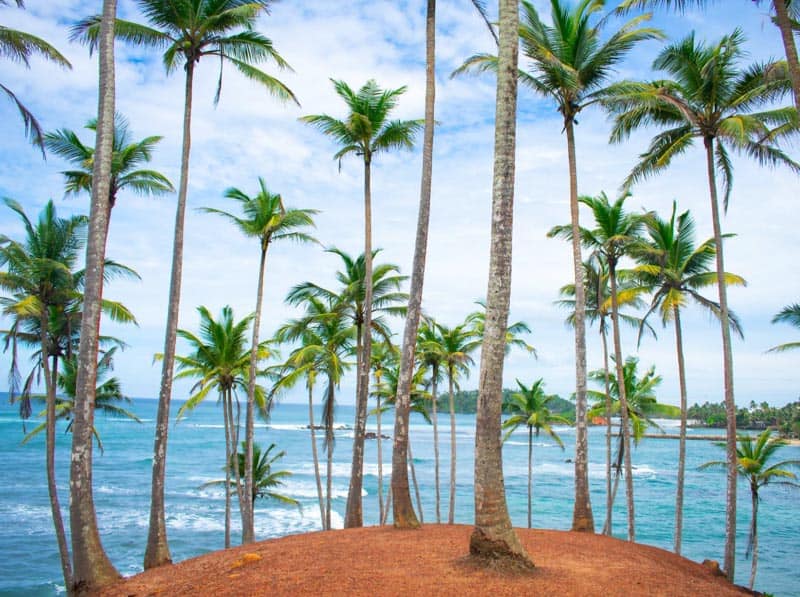 Beach-fringed and beautiful, Mirissa is for cracking a Sri Lankan cold beer and dipping your feet in the Indian Ocean. At least, that’s what most visitors to this corner of south-western Sri Lanka are in for. Others might come to hit the hardcore surf breaks, party the night away in chilled bamboo bars, or relax in some of the best local guesthouses and B&Bs on the island.

Where exactly is Mirissa?

Mirissa pokes out of the south-western edge of Sri Lanka. It occupies a sort of headland that makes up one end of huge Weligama Bay. In the other direction, a few beaches and river estuaries soon give way to the bustling town of Matara. Behind Mirissa to the north are pockets of the jungle, wetland and rice paddy that eventually rise with the foothills of the Central Highlands on the horizon.

How to get to Mirissa.

Because of its reputation for chilled-out vacationing, Mirissa is one of the first ports of call for those in search of sun, sand, sea and surf on Sri Lanka. The upshot? There are loads of ways to arrive, even from as far afield as the airport in Colombo…

One of the most enjoyable ways is by train. Services link to Weligama town from Colombo Fort, stopping at loads of the other popular beach destinations down Lanka’s western coast as they go. You can catch your ride in the big city, or hop on at stations in places like Hikkaduwa, Galle, and Midigama. A full fare in second class costs around 220-250 LKR. Once in Weligama, grab a tuk-tuk straight around the bay to Mirissa (around 300 LKR, but be sure to haggle).

Local buses are a good alternative. They’re certainly more frequent and offer links to smaller towns further east. You can use them to arrive in Mirissa from Matara, Dickwella, or Tangalle. There’s also even a connection to Ella in the mountains. They’re often full to bursting though, but that’s all part of the fun.

Private taxis to Mirissa from Bandaranaike International Airport will be priced at around 12000 LKR. You can usually reduce that with some determined bartering.

What to do in Mirissa.

It’s true what you might have heard about Mirissa – this is the perfect place to chillax, kick back, and watch the waves roll in. The stunning arc of gold-white sand and palm trees that is the main beach takes care of that. But that’s not all there is to do. Zippy surf breaks, bucket-list-busting marine safaris, and oodles more awaits… 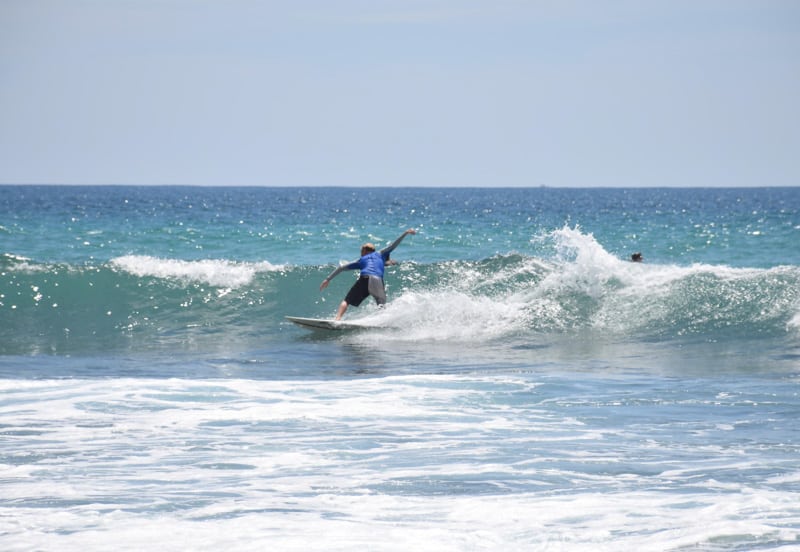 Mirissa actually sits at the heart of one of the best regions for surfing in Sri Lanka as a whole. To the east, you’ve got the upcoming bays of Hiriketiya and SK Town. Right next door is Weligama. That’s the beginner’s favourite, with reliable and protected beach waves where surf instructors and surf camps ply their trade. (A tuk-tuk to Weligama for a day should cost around 300 LRK one way).

Mirissa also has its own surf breaks. There’s one at the western end of the main beach. You can sit with a coconut and watch the locals rip it when it’s working. It’s really only for experts though, because it breaks over a sharp reef. Sometimes, the waves plump up a little, and you can even learn on Mirissa’s main beach. There are lots of rentals sat right on the sands offering lessons.

Between November and April each year (conveniently in line with the high season on the south-west coast of Sri Lanka), Mirissa becomes a hub for whale watching. You’ll see oodles of providers touting all sorts of trips across the deep blue of the Indian Ocean.

One of the highest-rated is Whale Watching with Geeth. They go slow to reduce noise levels for whales and don’t cross the path of travelling whales out at sea. That all adds to the likelihood, you’ll spy one of the great beasts. Blue whales, Bryde’s whales, sperm whales, dolphins, sea turtles – there’s loads waiting out there! 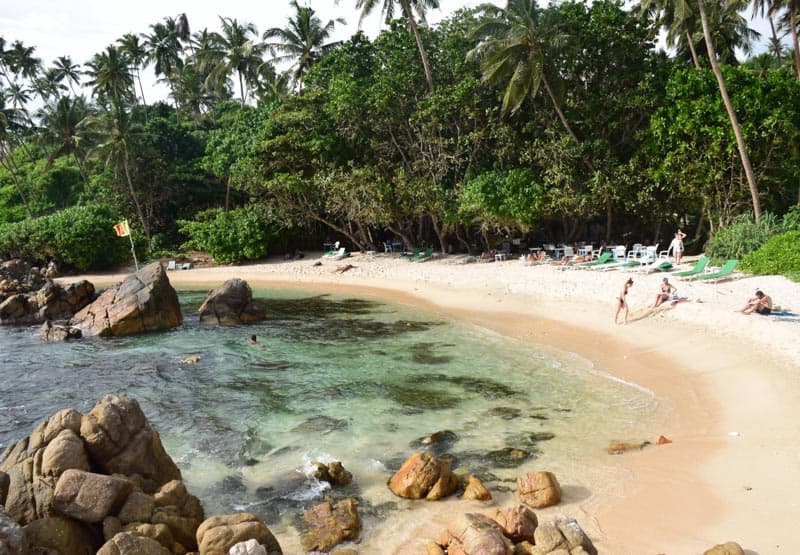 The problem with Secret Beach is that it’s pretty much known to everyone these days – thanks a lot, Instagrammers! The real question is who can be bothered to hike the muddy track through the jungle or pay the overblown tuk-tuk fare to get there.

You’ll need to navigate the streets behind the main beach and then turn left into the trees on a road that hairpins uphill. There’s a shortcut that cuts through clusters of high palms before emerging onto the sand. The reward? A gorgeous little crescent of powder where a few boulders jut from the azure ocean. It’s like a taste of Seychelles in Sri Lanka.

Party the night away.

Mirissa hasn’t garnered a reputation for hedonism and fun for nothing, you know. It’s surely one of the liveliest towns on the whole Sri Lankan coast. Just a glance at the main beach reveals more than ten places to settle with a cocktail or a beer. You’ll also find bargain happy hour deals that reduce the cost of a beer to around 250 LKR (the norm is about 500 LKR).

Things really get pumping after sunset. The sandy decks of Mirissa Eye and Kama Mirissa start to fill with drinkers then. Once the light’s totally gone, you can look forward to fire shows and DJ parties and more.

Where to stay in Mirissa.

Because thousands of travellers head this way to laze on the sands and spot big blue whales each year, there’s certainly no shortage of places to stay in Mirissa. It all really depends on what you’re after. Will it be a deluxe resort with an infinity pool by the beach? Will it be a bargain hostel that leaves more rupees for the famous Mirissa happy hour?

Sandwiched between the main Matara Road and the beach, Hangover Hostels Mirissa has been hosting backpackers for years. The rooms are simple doubles, twins, and dorms, with shared facilities and access to communal gardens. Prices will never break the bank, and most fellow guests are usually up for a chat, a beer in the beach bars, and even a night out on the town.

Budget-friendly but with a twist of finesse, this lovely B&B has taken a lot from its Estonian-Sri Lankan owners. There are touches of both cultures, what with a colonial-style exterior and rooms that have partitioned showers, along with free incense sticks and Sri Lankan fruit at breakfast. An added bonus for animal lovers is the resident dog, not to mention the regular flying visitors – hummingbirds, colourful Sri Lankan magpies, and grass-green parakeets.

Escape the buzz of Mirissa town to find your own little slice of paradise in these five-star villas and suites. They’re chic and stylish and spread out between a few coconut palms amid their own grassy garden by the Indian Ocean. Most open to face a stretch of secluded sand, and there’s even a family-sized rental with a private swimming pool. 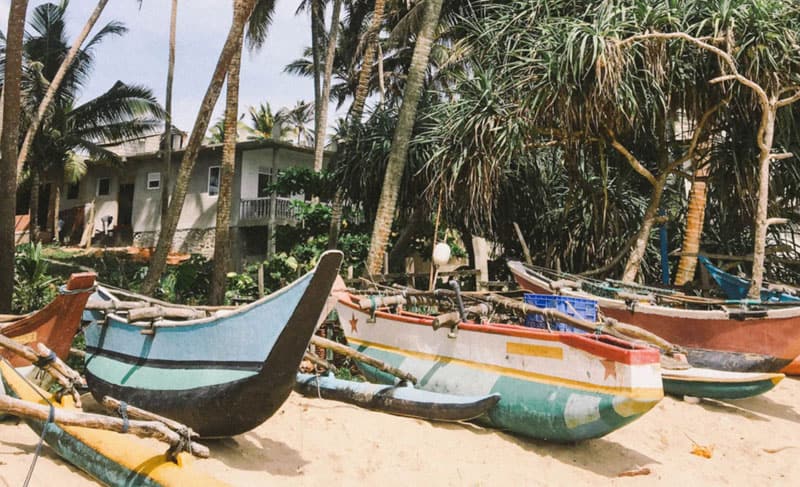 Where to eat in Mirissa.

Whether you’re craving a red snapper fresh from the BBQ or a potato-packed samosa off the street stalls, Mirissa has you covered…

Bargains don’t come tastier than the offering at Dilmi Roti Shop. A simple, crooked shack on the side of the main A2 road, it’s hardly a looker. But take a seat at one of the ramshackle plastic tables, and you can enjoy spicy local veg curries, some of the best samosas in all of Lanka, and rotis of different shapes and sizes. Tip: There is beer, but it’s not listed on the menu.

Zephyr is a regular mention when it comes to the top places to dine in Mirissa. And why not? The location is lovely. Most of the outdoor seats gaze straight over the golden sands of the main beach, and there’s an interior that’s clean looking and breezy (more like a Greek taverna). Menu wise, you’re talking a concoction of modern western dishes and Sri Lankan seafood. Midrange prices should be expected.

Okay, so Italian food might not be the option of choice when you’ve got the uber-fresh seafood of Mirissa awaiting just over the beach, but there’s got to be a time for a break from the local stuff. Cue Margherita Italiano Restaurant. It’s up there with the top pizza joints in Sri Lanka. A wood-fired oven takes care of the crispy bases, while sides of salad and the real olive oil only add to the draws. Downside? That location on the main road can be a little noisy.

If you can think of anything to add to this ultimate guide to Mirissa, we’d sure love to hear it in the comments below! 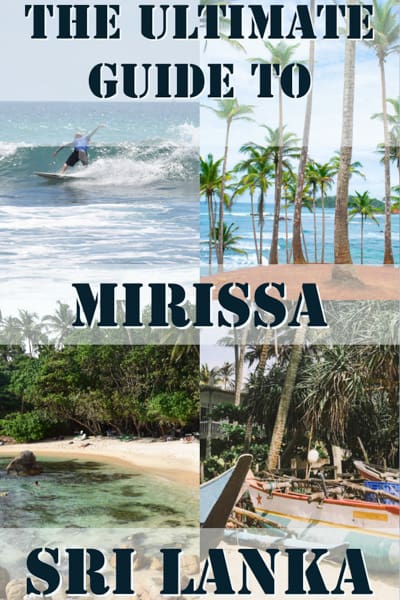