Top 10 Things to see in Rome

Also known as The Eternal City, Rome is one of Western Europe’s most famous cities to visit.

With world-renowned landmarks such as the Colosseum, the Pantheon, the Trevi Fountain, and more, along with all of the fascinating history that lies beneath each landmark
— It truly is no secret how Rome made such a big name for itself. 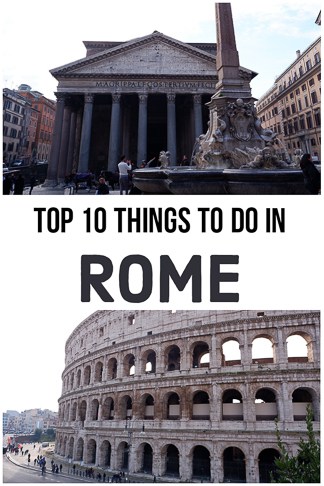 Top things to do in Rome, the capital of Italy

In this guide, I will go over all of the top things to see in Rome which is one of the most romantic destinations in Europe. to help you plan the ultimate Italian vacation. After all, when in Rome, do as the Romans do.

Top Things to see in Rome 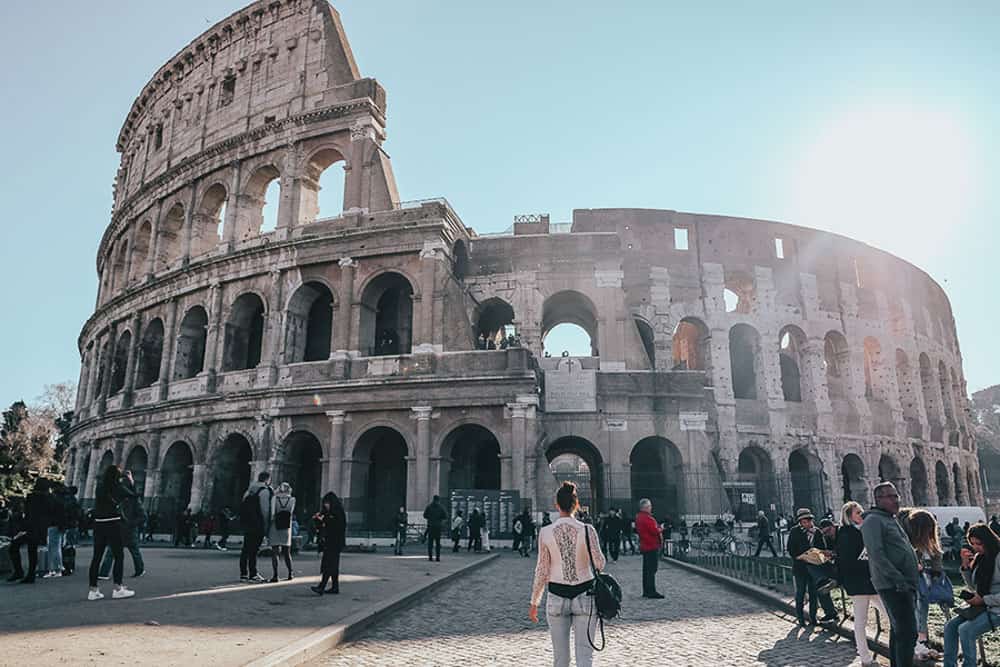 The amazing Colosseum in Rome.

Capable of holding an audience of 80,000 people, the Roman Colosseum used to be the biggest amphitheatre in the world.

Not sure how you should get the most out of your time in Rome? then  a 3-day Itinerary to Rome is what you need,

The Colosseum was used for many different activities such as recreations of battles, execution of prisoners, and gladiator fights.

It is the city’s most recognized landmark and one of the top things to see in Rome. 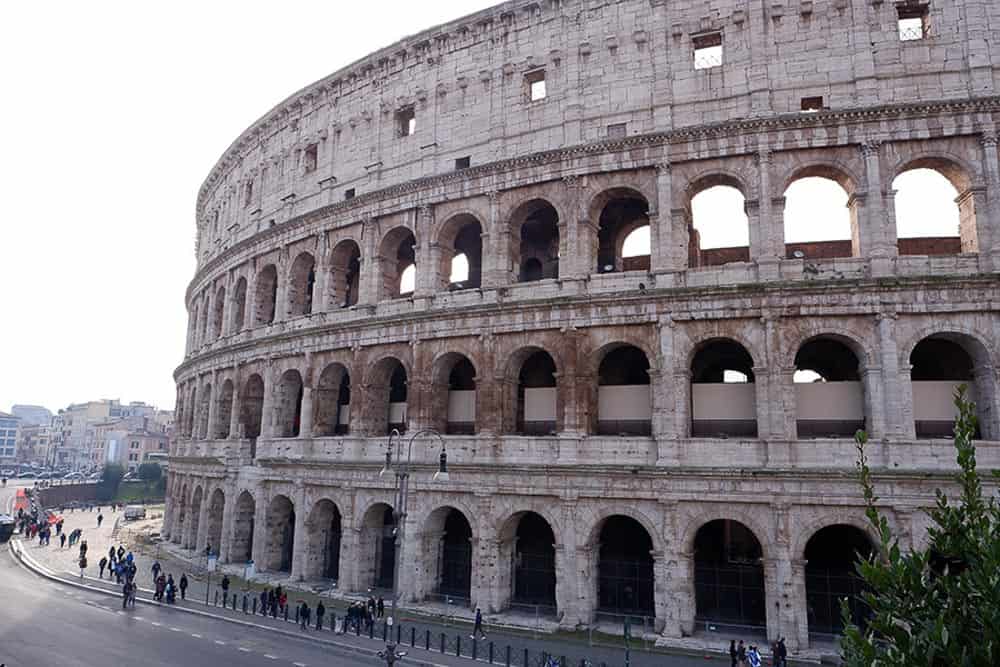 The outside of Colosseum

There are a couple of different ways that you could visit the Colosseum. To visit the outside is free of charge but if you want to go inside, you will have to purchase tickets.

You can either purchase tickets on your own and go inside or book a tour and be accompanied by a guide. I went with a tour guide, and that is the way I would recommend visiting the Colosseum.

Your tour guide will be able to educate you on all the fascinating history that the famous landmark holds and with some tours, you may even be able to skip the line. 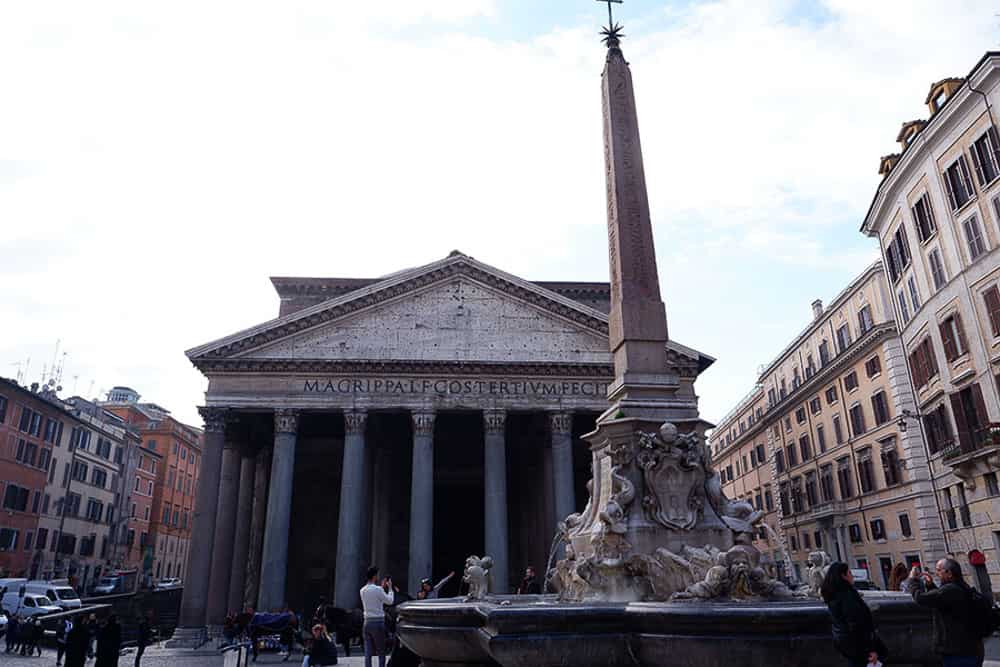 Another top Roman landmark and a sight to see that should be on everyone’s itinerary while visiting The Eternal City are The Pantheon.

The Pantheon is a former Roman temple that turned into a now Catholic Church. The temple was actually built on the same site as two other Pantheon buildings.

It was built between A.D 118 and A.D 125. Emperor Hadrian had it built to replace Augustus’ friend’s Pantheon which unfortunately burnt to the ground in A.D 80. 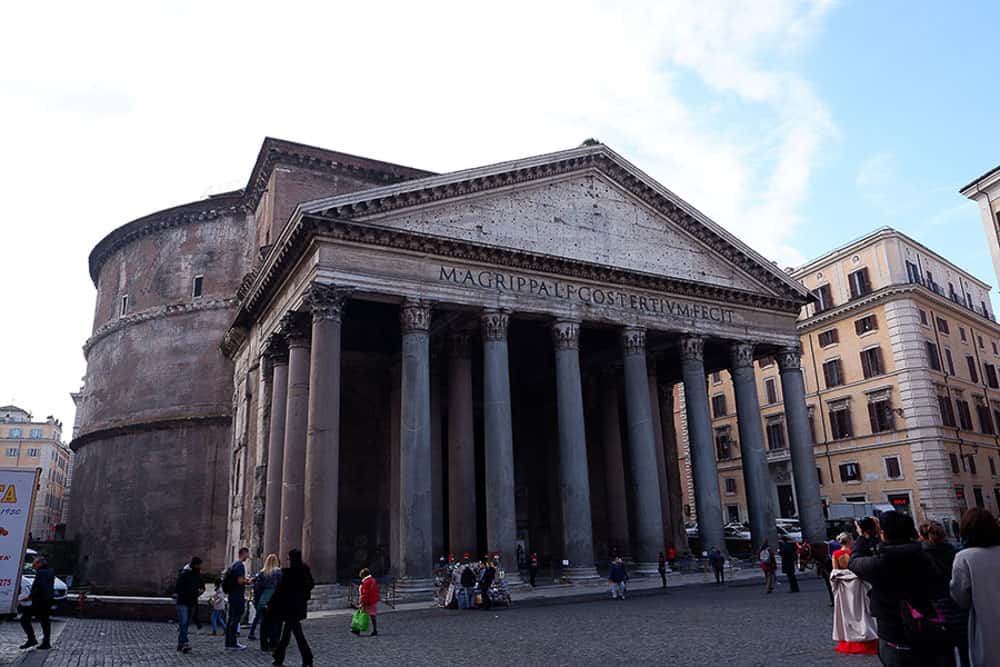 The Pantheon is free to enter and has many incredible sights to visit, which make it one of the top things to see in Rome.

It holds three tombs to some of history’s most famous men. You will find the Tomb of Raphael, who was a famous artist, Victor Emmanuel II, who was the first king of Italy, and Umberto I who was the son of Victor.

Along with the famous tombs, you will find an abundance of other great sights in this world-famous landmark. 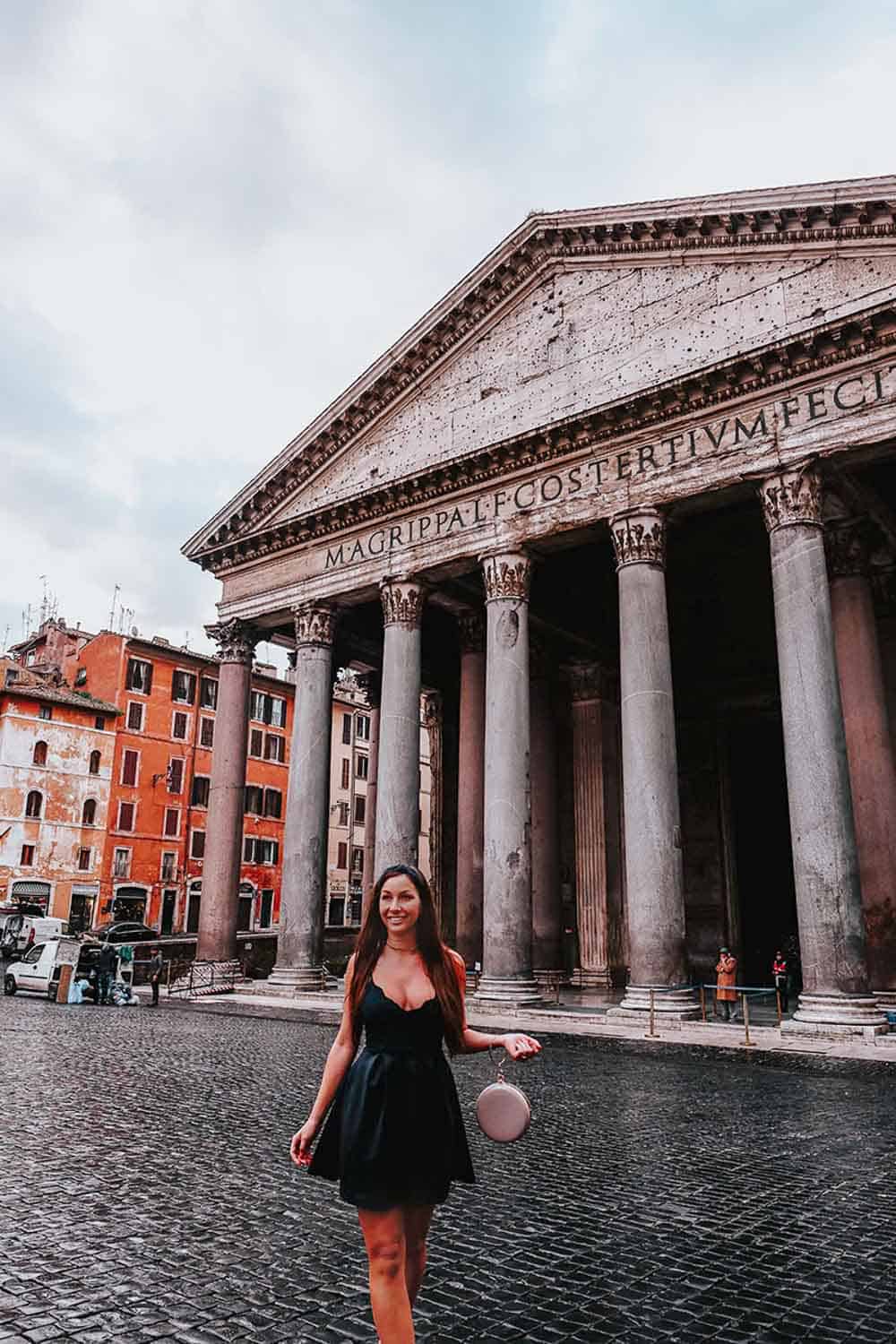 In front of the Pantheon 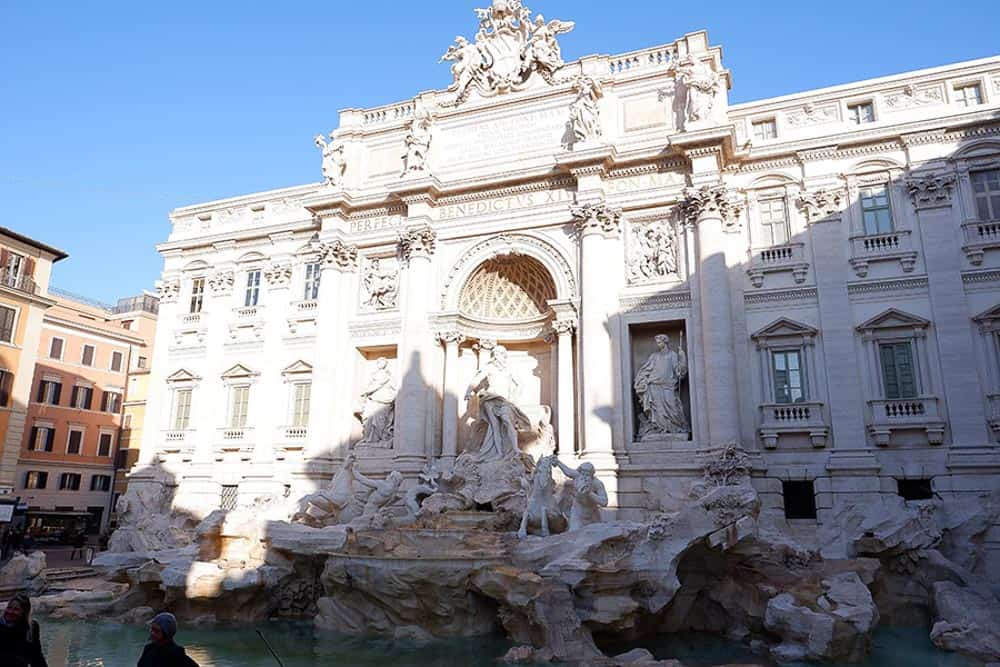 Hands down one of Rome’s most visited sight and one that I could stare at all day due to its everlasting beauty is The Trevi Fountain. Designed by Nicola Salvi, The Trevi Fountain is known as being one of the most famous fountains in the world.

Built-in 1732 and standing at an impressive 85 feet tall and 65 feet wide, the fountain itself is gigantic. Rumour has it that if you throw a coin with your right hand over your left shoulder, you will be back in Rome one day. 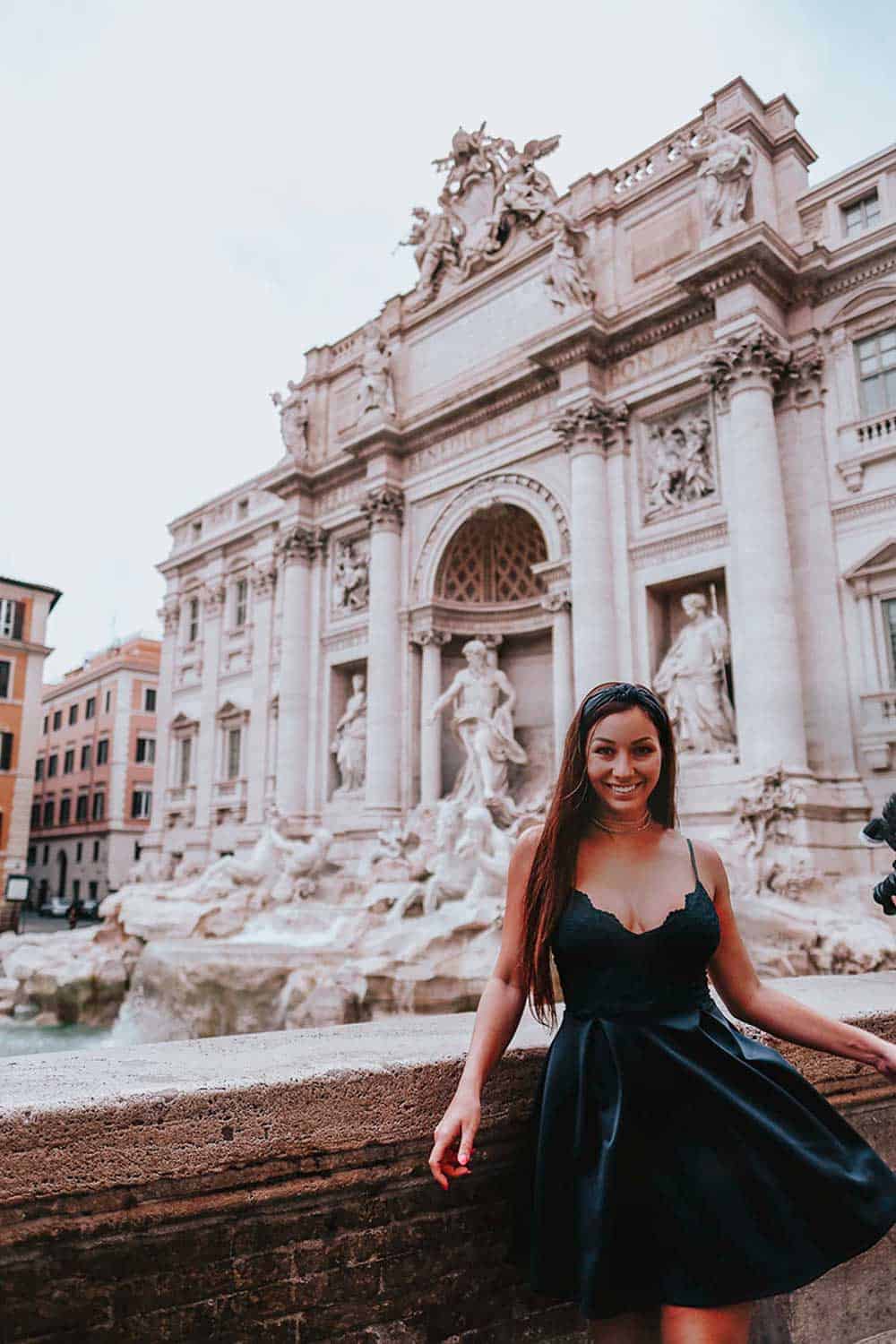 In front of Trevi Fountain

And another legend is that if you toss three coins in the fountain, three different things will happen. The first coin will bring you back to Rome, the second will bring romance into your life, and the third will bring marriage.

With over €3000 tossed into the fountain EVERYDAY, rest assured it all goes to a good cause. The money is collected every night and donated to charity.

While it is needless to say if you are creating your itinerary on Rome, The Trevi Fountain should absolutely make that list.

Located right next to the Colosseum, the Roman Forums are created from ruins of a variety of important and ancient government buildings. This is another sight I recommend going with a tour guide as there is so much history located in such a small space that the only way to get the full experience is through a guide.

The Forums were made up of different buildings which served all different purposes. From The Senate House, The Arch of Titus, The Temple of Saturn, The Sacra Via, and more, it was one of the most famous spots in ancient Rome, just like the forums are today in modern Rome.

Most of the sites of the Roman Forums were demolished in A.D 410 when the whole Roman Empire started to fall.

It is quite an unreal sight to see. Being able to stand in the very same spots where all this incredible history took place is absolutely fascinating. It left me speechless.

Located in Vatican City, you will find St Peters Basilica. Which fun fact for you — Vatican City is its own country. It is located smack dab in the middle of Rome, and it is actually the smallest country in the world.

St Peters Basilica is a church that was started by Pope Julius II in 1506. With millions of visitors each year, it is one of the top things to see in Rome. The whole church is an impressive 22,300 square meters and is one of the largest churches in the world. Along with its massive size and not to mention its breathtaking and fascinating renaissance style architecture, it is a sight you are not going to want to miss.

FUN FACT: St Peters Basilica is also a famous burial site. It lies on top of Saint Peter’s tomb, which is located at the west end of the church. Along with Saint Peter’s body being buried deep under, there are also quite a few other bodies that were laid to rest under the church.

Also located in Vatican City, the Vatican Museums are a must-add to your Rome itinerary. The museums are made up of a total of 54 different galleries. With over 70,000 exhibits, you should allow yourself plenty of time to view and explore all of the different exhibits.

In the Vatican Museums, you will find pieces of art by some of the worlds most renowned artists such as Rachel and Michelangelo. If you want to take it a step further, you can even visit Michelangelo’s house in Florence.

During my two week vacation in Italy, I decided to stop in Florence and visit his house. It is definitely something I recommend if you have the time. 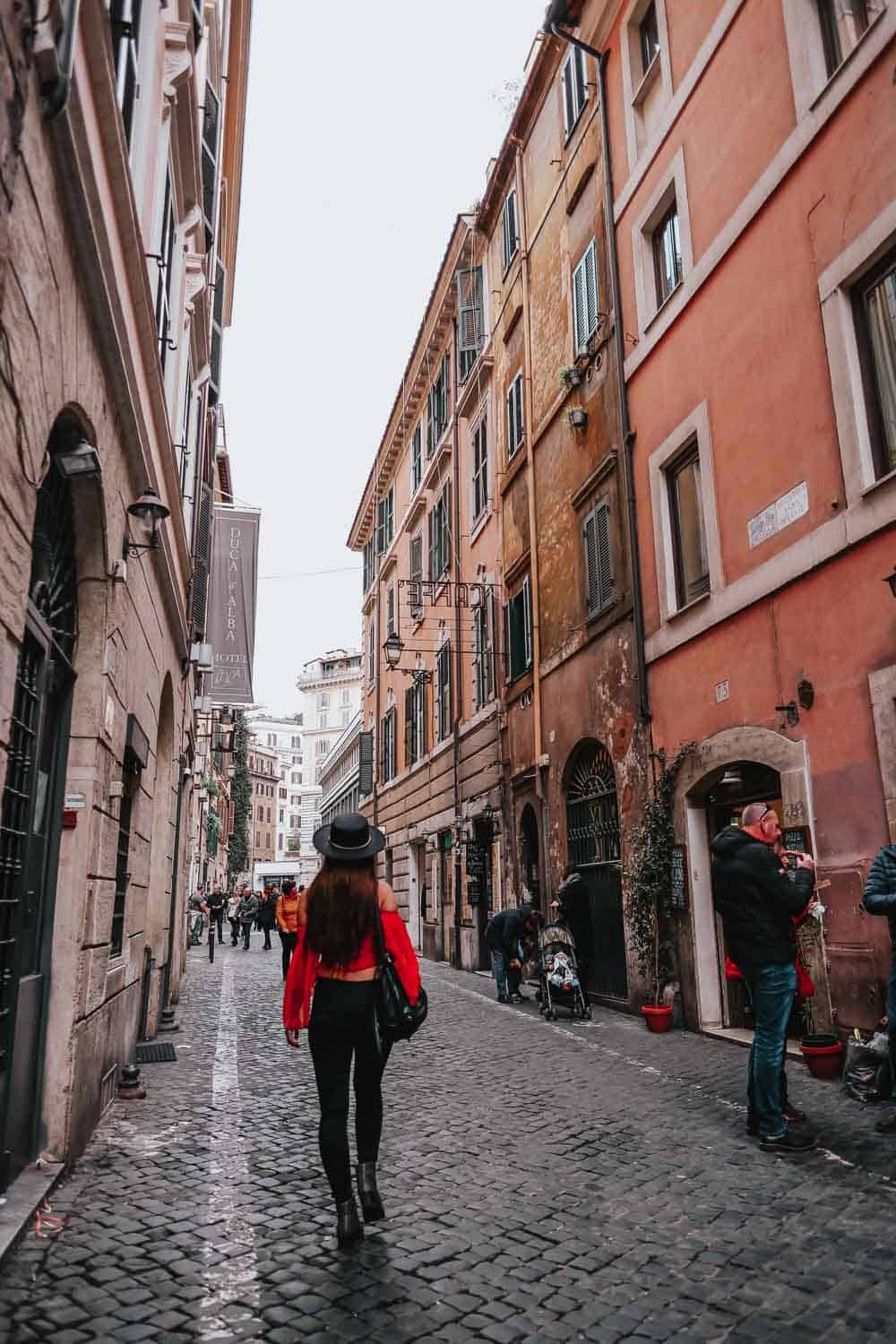 One of my favourite places in Italy and one of the best neighbourhoods to stay in Rome is Trastevere.

Trastevere is one of Rome’s most endearing neighbourhoods. Filled with endless cobblestone streets, delicious and authentic restaurants, fun boutiques, and a vibrant nightlife, it is one of the top neighbourhoods to visit while in Rome. 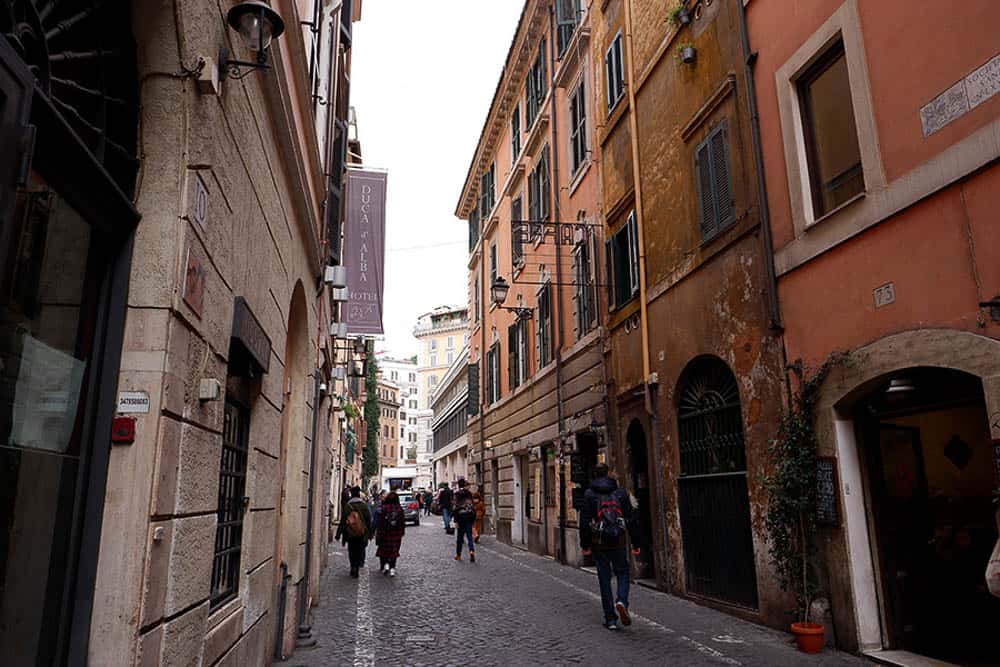 Ever since I visited the Paris Catacombs, I’ve always found them fascinating. With hundred and possibly thousands of human remains nestled deep underground, you can’t help but wonder about all the history that lies behind it.

In Rome, there are 60 catacombs in total. They are made up of hundreds of kilometres of underground passageways that hold thousands of tombs. They date back to the second to the fifth century and were prominently used by Christian and Jews.

The Catacombs were made because the Christians did not believe in burning the bodies of the deceased, but they didn’t have enough space or land to bury the bodies. As a solution to the problem, they decided to go ahead and create these underground cemeteries.

In front of the Spanish steps

Made up of a total of 138 steps and built in the 17th century, the Spanish Steps are one of the top things to see in Rome. The Spanish Steps were originally created to make a connection from the Spanish embassy, the Holy See at the Base, and to the Church of Trinità Dei Monti.

The steps were designed by Alessandro Speech and Francesco de Sanctis. Not only is visiting the Spanish Steps a great way to get your steps in for the day, but it is also quite a sight to see. They are located in Piazza di Spagna.

If you climb all the way to the top of the stairs, you will also be greeted with a breathtaking view of Rome which makes for a perfect picture opportunity like this one to remember your time in Italy.

Rome is famous for many reasons. From its delicious food, fascinating culture, welcoming locals, and one-of-a-kind history. It’s no secret why it is one of the world’s most visited cities in the world. I hope you enjoyed my guide on all the top things to see in Rome!
If you are wondering where to go next in Italy, what the region of Puglia  and Bari in Southern Italy

Caresa! Author and creator of This Spontaneous Life. I am a full-time travel blogger who’s goal in life is to inspire women to travel more and explore our beautiful world.

My whole life I believed I had it all figured out. Originally from France but raised in Las Vegas, I had it all — Or so I thought. Incredible friends, a waitressing job at a restaurant that made great money, my own place, and was living my life how society wanted me to.
Instagram Facebook

Karakoram Highway: The World's Best Roadtrip
← Previous
Essential Travel Tips for the First time Visitor to India by a Local!
Next →
Click here to cancel reply.