Travel Guide To: Golconda Fort A Off The Beaten Path Fort In India

Golconda Fort A Mighty Fort In India You`ve Probably Have Never Heard Of. 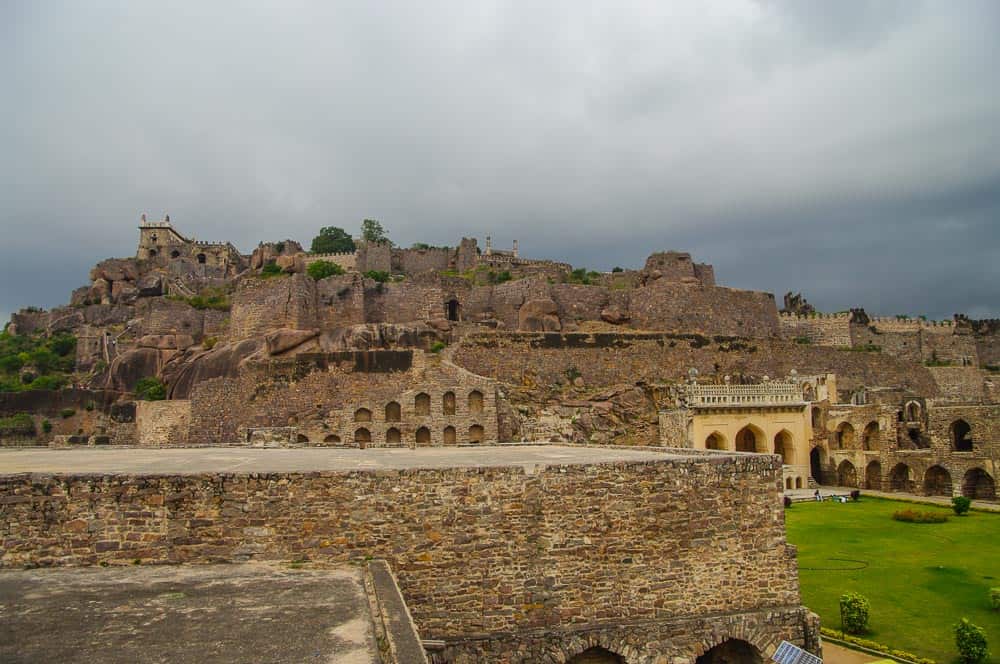 Golconda Fort, located in the southern Indian city of Hyderabad, is one of the country’s most regal, and majestic of forts.

A visit to this fortified complex takes you back centuries, to a time of grandeur, bravado, and architectural prowess.

And not just that – the region occupied by Golconda Fort was known, above all, for being surrounded by diamond mines that unearthed the world’s finest jewels, but more on that a little later.

Golconda Fort is one of the best and easiest day trip from Hyderabad. 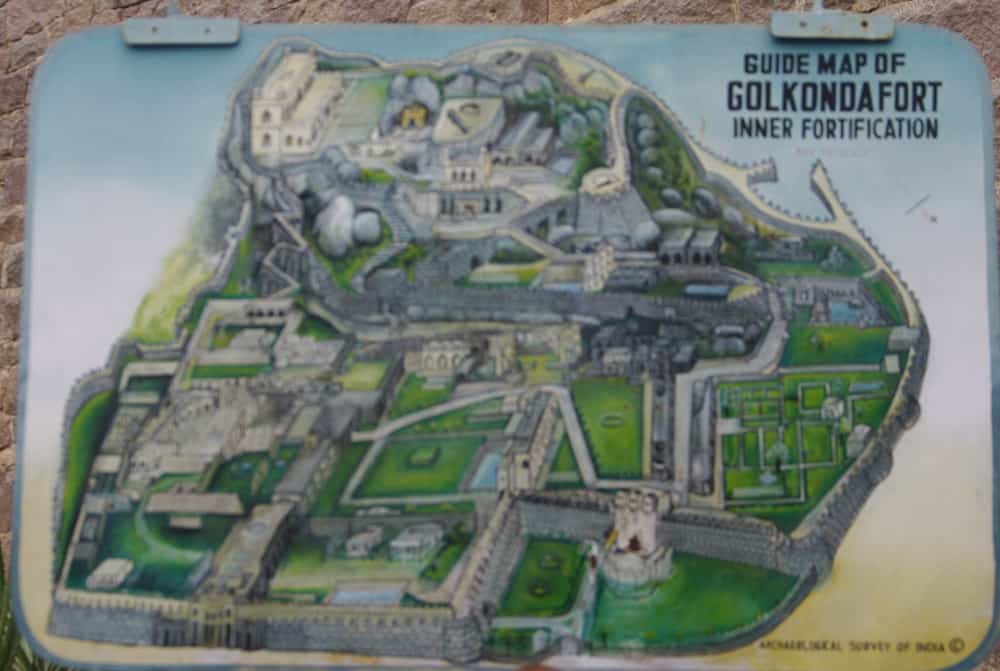 Map of Golconda Fort, for some reason not in focus.

Golconda Fort, located in the western part of the outer city of Hyderabad, dates back to the 11th century.

Originally translating to ‘Shepherd’s Hill’ in the local Telugu language, the fort was first known as Mankal and was built by a southern Indian dynasty known as the Kakatiyas, that reigned over large parts of the Deccan region. 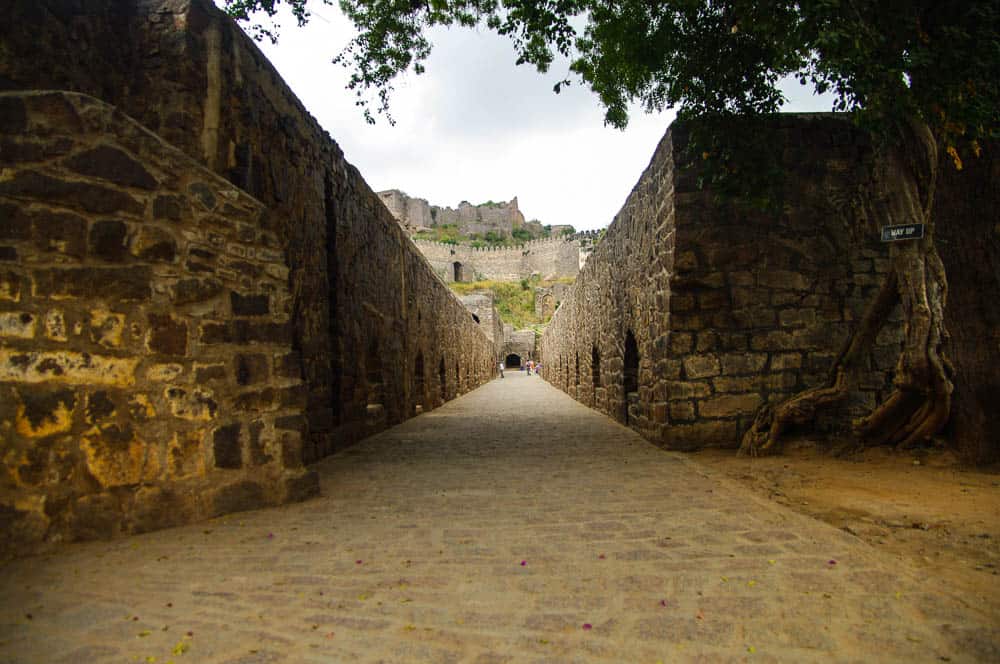 Located atop a hill, the fort was part of the western defences of the Kakatiya kingdom and proved to be a formidable complex.

But as with everything in history, dynasties came, and dynasties went, and so was the case with the Kakatiya dynasty who were overthrown by succeeding dynasties. 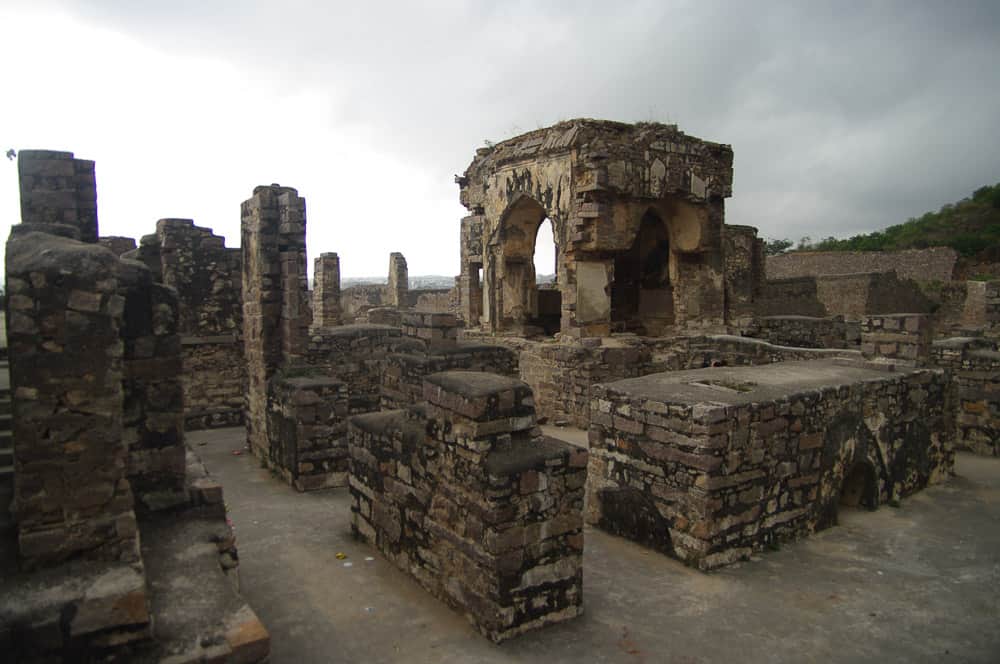 The Golconda Fort changed hands and ownership over the centuries, with several battles fought, lost, and won by different armies and kingdoms.

The last dynasty to rule from the fort, before it finally fell to ruins, was the Qutb-Shahi Dynasty, who took the fort to greater heights and expanded the fort complex.

It eventually fell from glory when it was besieged by the Mughal dynasty in 1687, after a famed eight-month-long siege.

A jewel amid jewels!

Apart from being a formidable fortified citadel, Golconda Fort was also renowned for being home to some of the world’s biggest and most expensive jewels.

The fort was known to have a vault that housed renowned diamonds like the Kohinoor and the Hope Diamonds! 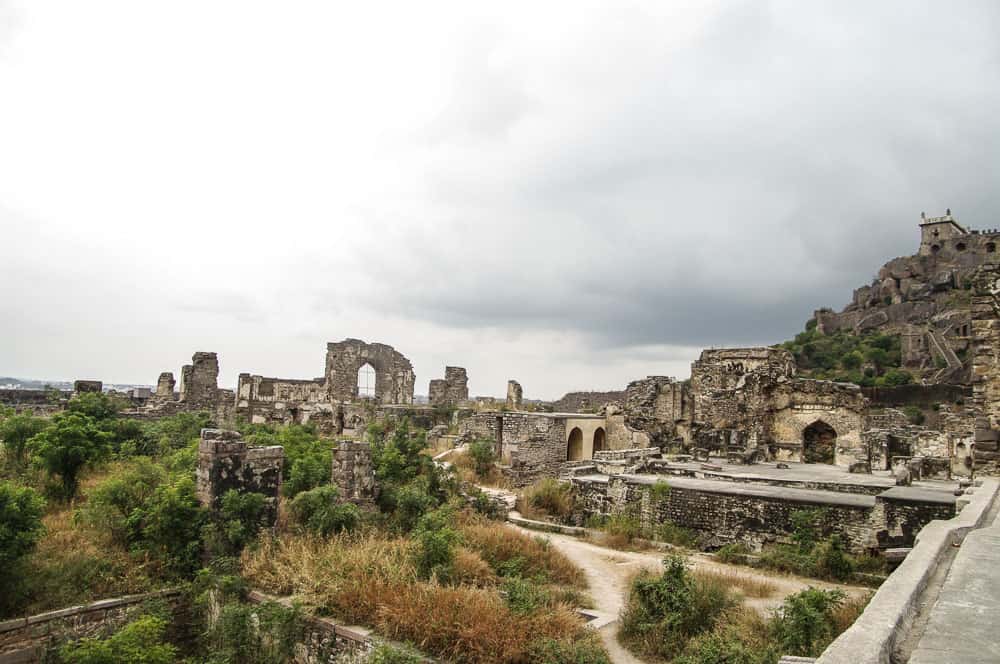 There were quite a few diamond mines around the fort, especially in the area of the Krishna River valley, and at that time, India was home to the only known diamond mines in the world.

And of course, this added to the fort’s fame, and was an added feather in its cap!

Ever thought of what a 182-carat diamond or 148 carats diamond felt or looked like?

These rare jewels are now housed in museums around the world, while the Kohinoor diamond sits embedded in the Queen of England’s crown!

So what’s all the fuss about, apart from diamonds!

Listed as an archaeological treasure, the fort is actually made up of four smaller forts, surrounded by a 6.2-mile long outer wall.

That’s the very first sight that hits you when viewing the fort from a distance – the long boundary wall surrounding the fort. 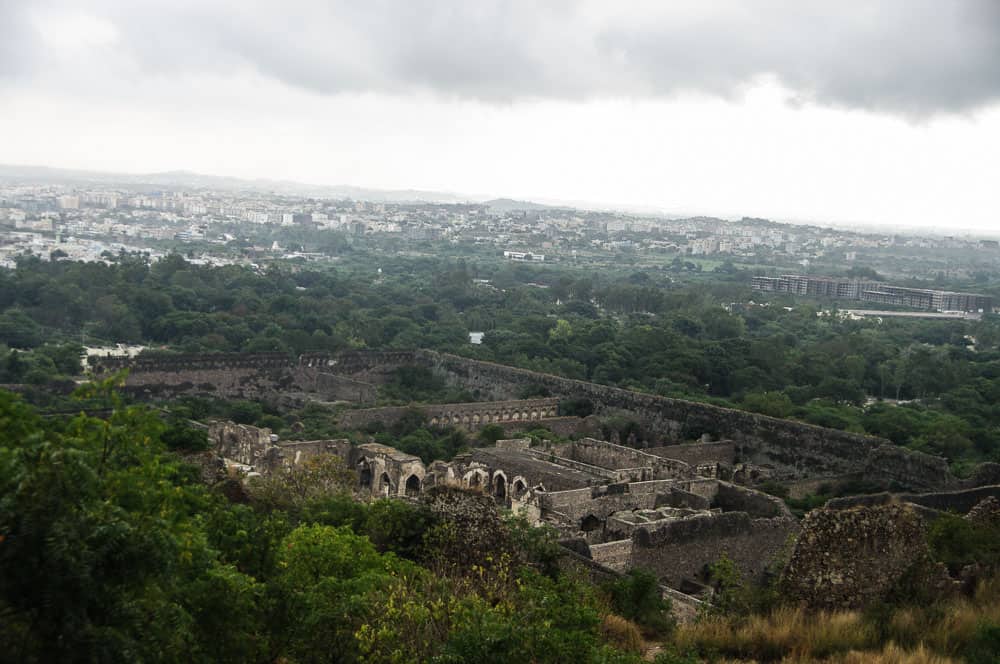 view from the fort

Among other highlights of this majestic fort are the eight mighty gateways studded with spikes, and located at different parts of the fort.

Another dominating feature worth checking out are the many cannons, still mounted on bastions.

And you can’t miss marvelling at the drawbridges.

Once you’re at the fort, soak in sweeping vistas of the Deccan Plateau and its surrounding areas.

The fort’s prime location offers a bird’s eye view of the city below, and if you happen to visit the fort after dark, for the sound and light show, you’ll be treated to a magical view of twinkling lights of the city below!

And on the inside of Golconda Fort.

There is plenty to let your eyes and ears be amazed by! Let’s start with a couple of features that will blow your mind. 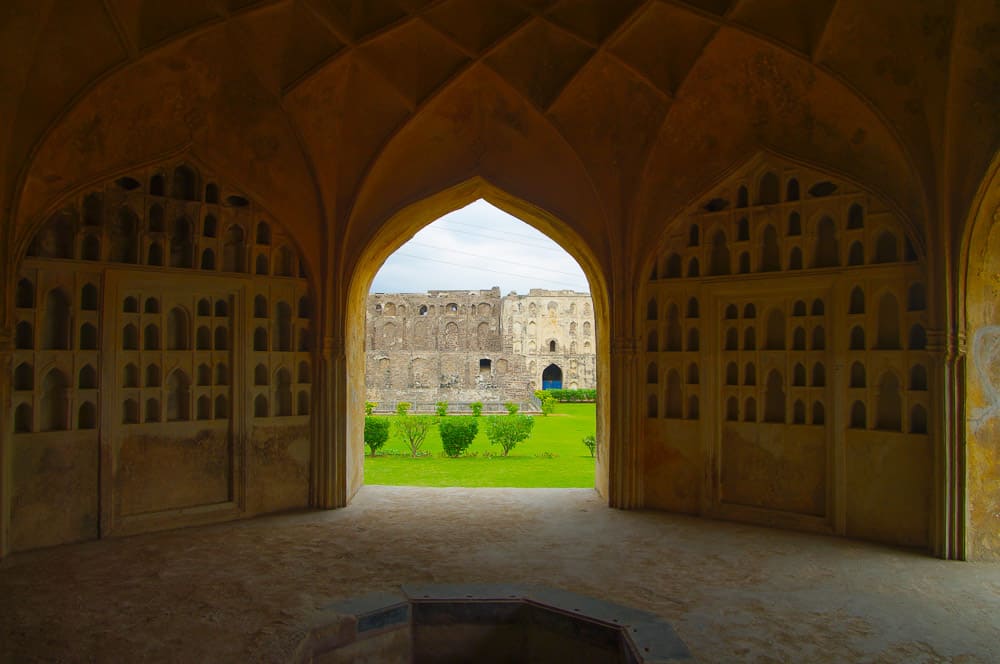 For one, the fort had a really advanced acoustic system, designed to forewarn residents of any impending dangers from miles away.

A loud hand clap at the outer-most entrance to the fort at the bottom of the hill could be heard right up at the inner fort complex.

Don’t forget to try this when you make your way to Golconda Fort. The acoustics will blow your mind.

And not just the acoustics – the architectural design sense of people in earlier times was rather astounding too. 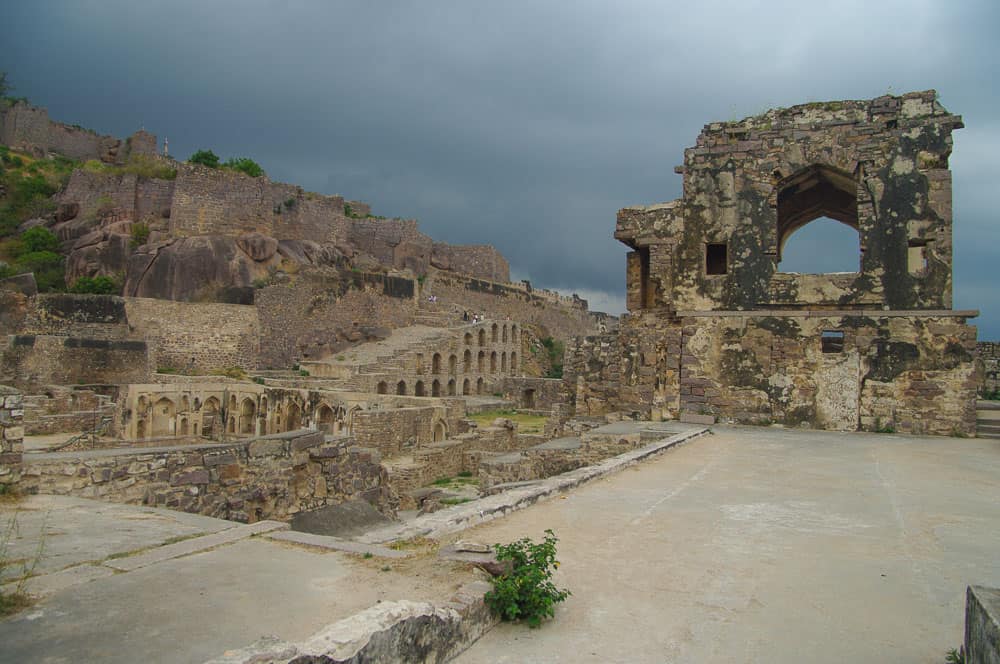 We’ve seen plenty of examples of excellent architecture in different parts of India, and Golconda Fort is no different.

You can venture to any part of the inner forts, and you’ll be greeted with bouts of cool fresh air – even today! 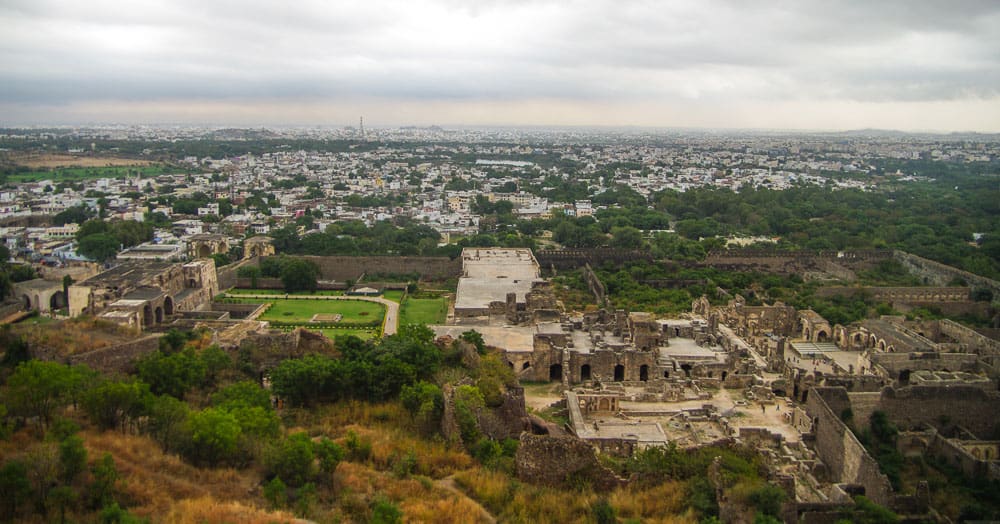 view from the fort

This is the testimony of their acute design sense that ensured terrific ventilation for a time when electric fans and air conditioning was non-existent – and well, wasn’t even needed, despite the scorching summer months, the area experienced. 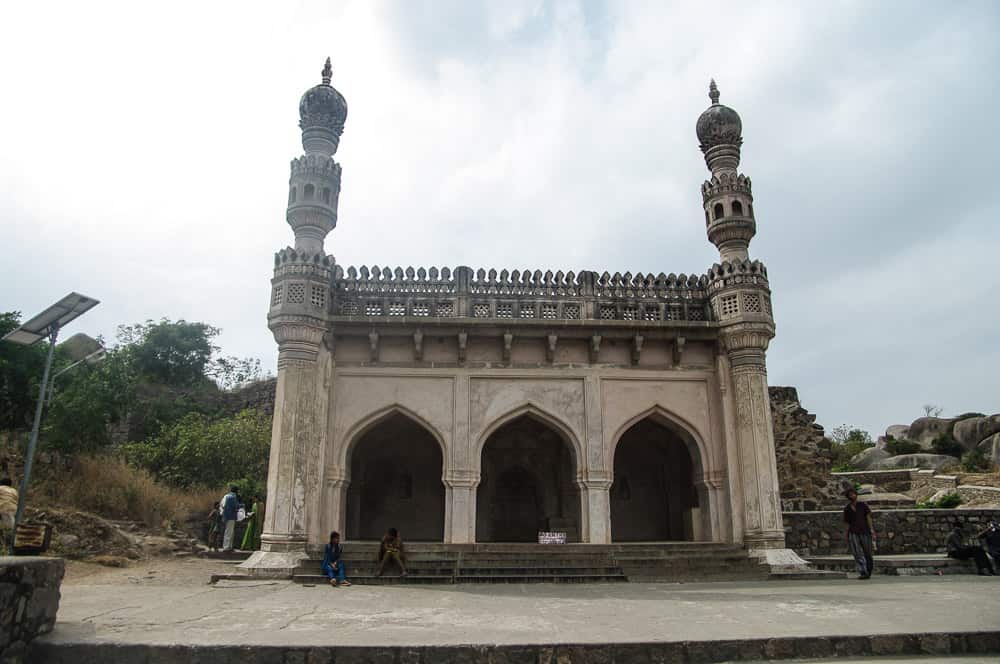 Mosque inside the fort

The outermost gate of the fort, known as Fateha Darwaza (translating to Victory Gate) is a dominating piece of work – a mighty iron gate studded with spikes, to keep elephants from enemy armies from pummelling it down! 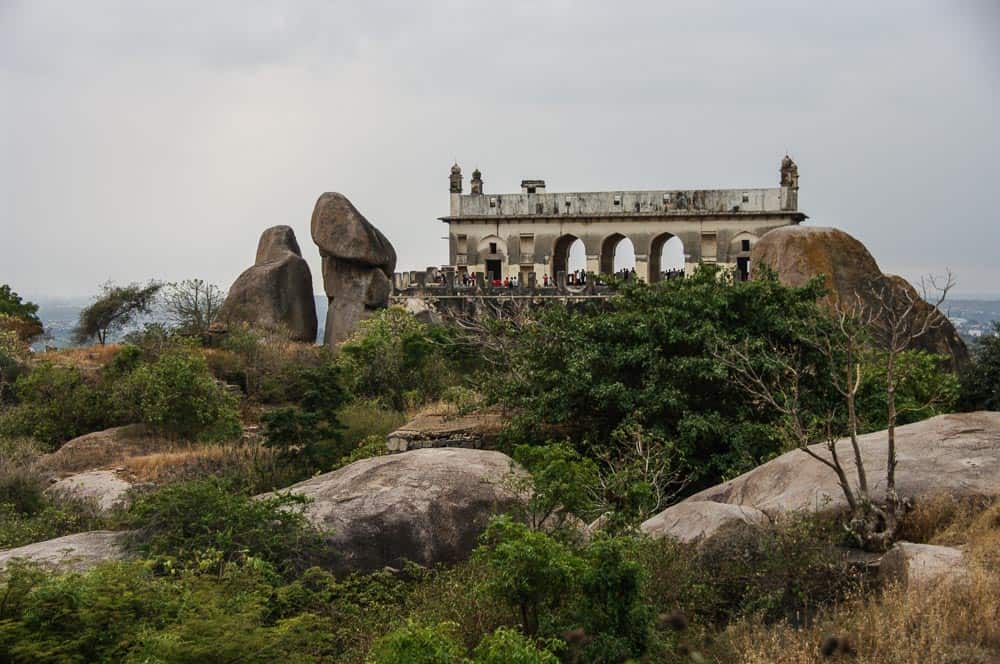 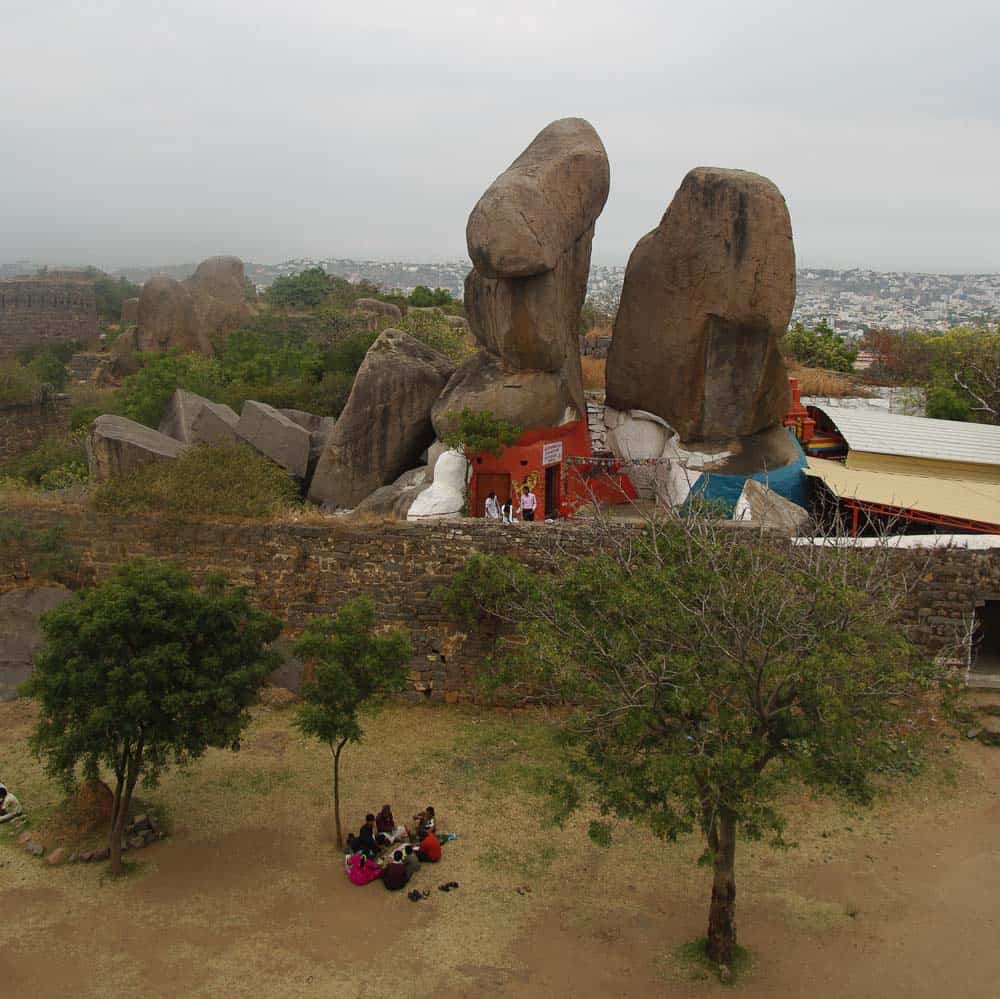 Another entrance to the fort on the eastern side is the Bala Hissar Gate that leads to the inner pavilions of the fort. 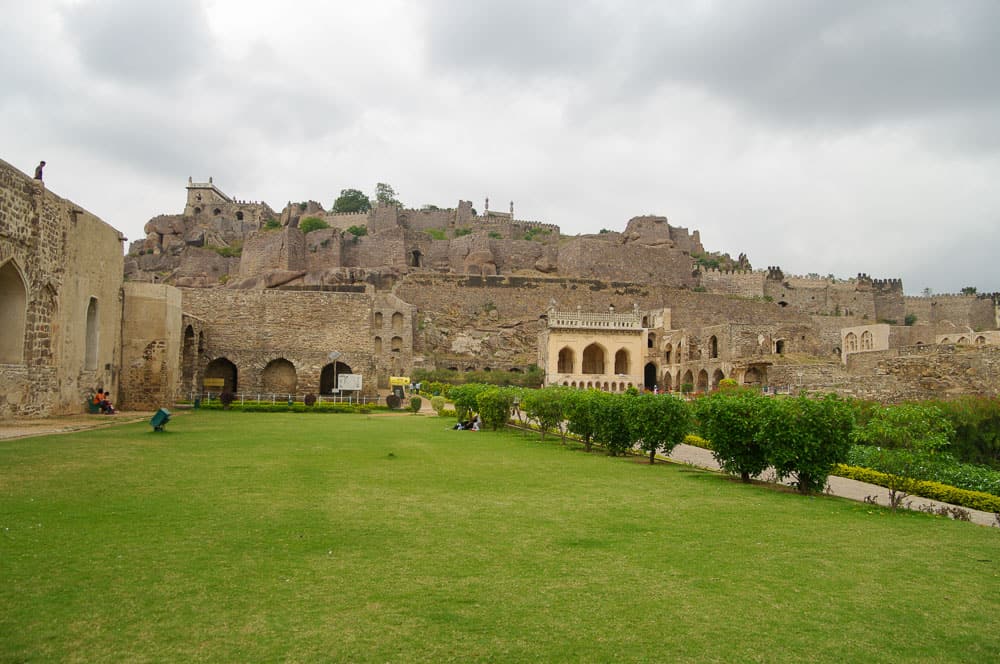 courtyard inside the fort

This entrance is more artistic, with rows of scrolls works inscribed on it, and decorative peacocks that sit above the gate, welcoming visitors.

While a lot of the structures within the fort lie in ruins, a few that are still in great condition include the Durbar Hall which was considered the crowning glory of Golconda Fort. 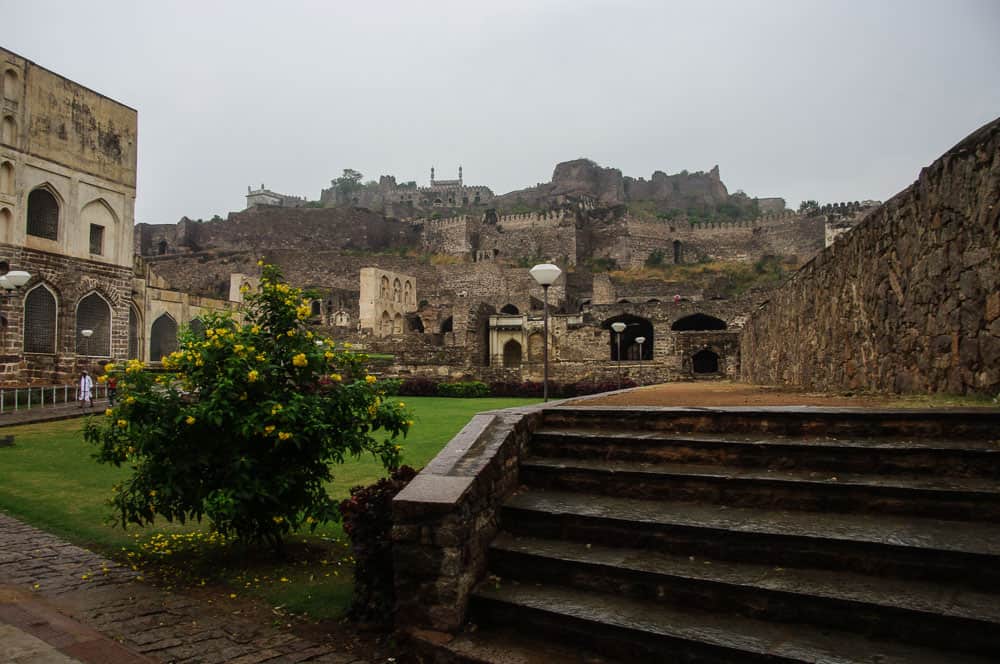 Get ready to climb a 1000 steps to reach the Durbar Hall, but it’s worth the effort – you’ll get to see great views of the twin cities of Hyderabad and Secunderabad down below! Keep your camera handy.

The Royal Nagina Gardens, the Baradari Hall, Rani Mahal, and the barracks for the bodyguards are still in pretty good condition.

More recent structures like temples, the Mosque of Ibrahim, and several Qutub Shahi tombs are intact as well. 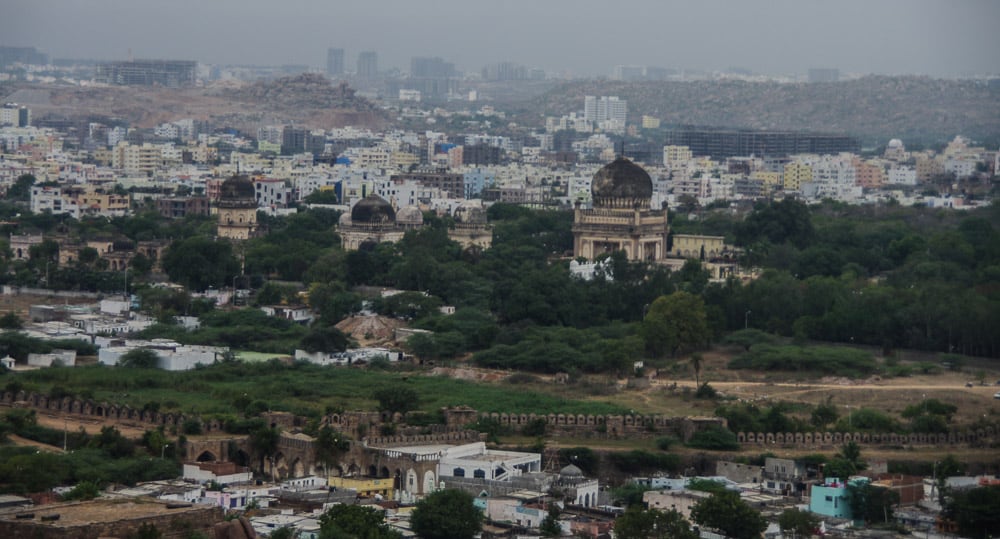 Like so many fortresses across the country, Golconda was fought over, won, lost, and won again by different dynasties with different religious beliefs.

A mix of Hindu and Islamic cultures is clearly visible in its many structures!

To catch the Sound and Light show that runs through the year with slightly different summer and winter timings, and is available to enjoy in English, Telugu and Hindi.

Make sure you check the language for the show you book!

Pick up a guide booklet, so you know what you’re seeing, and where you are, and if you prefer history being recited to you, knowledgeable guides are available for tours as well. 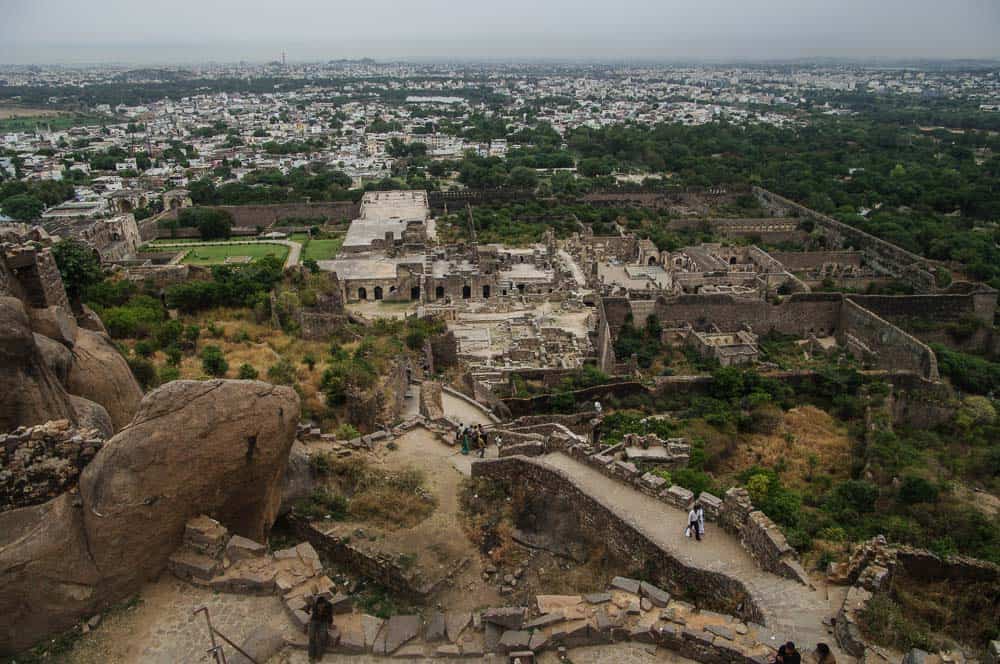 How To Visit/Travel to Golconda Fort.

Golconda Fort is located about 11km/7miles to the west of Hyderabad city centre.

While Rickshaws are easily available, so is the easiest and fastest way to take the metro to either the Peddamma Temple Metro Station or the Jubilee Hills Check Post Metro Station  (both on the Blue line)

The metro stations are still a bit of a distance away from Golconda fort, so you will still have to take a Rickshaw the last leg of the journey, but will you bypass the worst traffic sections in Hyderabad.

Entrance Ticket Price: 15RS for Indians and 200 RS for foreigners.

There are a daily sound and light show at Golconda fort, with the first show at 18.30 and the second one at 19.45.

This part of India can be unbearable hot for foreigners during the warmer summer months, with the temperatures often going above 40c/104f in the shade from April to the end of August.

So the best time to visit Golconda fort is in the “cooler” months from September to March. 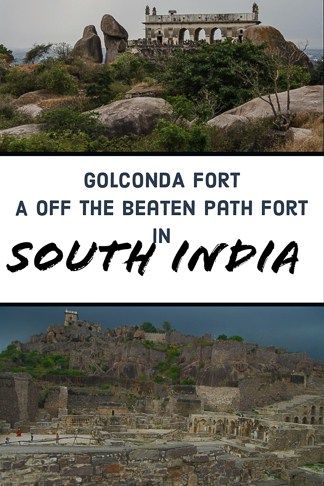 travel guide to Golconda Fort A Mighty Fort In India outside Hyderabad that you never have heard about.

Travelling To Svalbard/Spitsbergen During Winter, Everything You Need To Know.
← Previous
6 Attractions in Seoul for Culture Lovers
Next →
Click here to cancel reply.