The Wakhan Valley (also named the Wakhan Corridor) is one of the most beautiful and remote places in Asia and the world.
There ain’t no smartphones or WiFi connection in this part of the world, and the common transportation is still donkeys.

But since the common transportation is the donkey, the best way to travel around the valley is by hiring a car and guide or riding your own with a bicycle.

I did meet a few foreigners travelling through the valley in a hired car, but they were rushing trough, only spending 3/4 in the area, while I and my bike had to spend 12 days going through the area.

I could have done it faster, probably about half the time, but the Wakhan Valley is way too beautiful to rush trough.

The best thing about making the trip with a bicycle is that you are completely on your own. It’s so peaceful, and I got invited to drink tea and smoke opium with the locals in every village that I passed by.

Most people are drawn to places which have been fully explored and especially over-exploited before and they tend to think they should go places because they’re mentionned in a book or seen on TV. 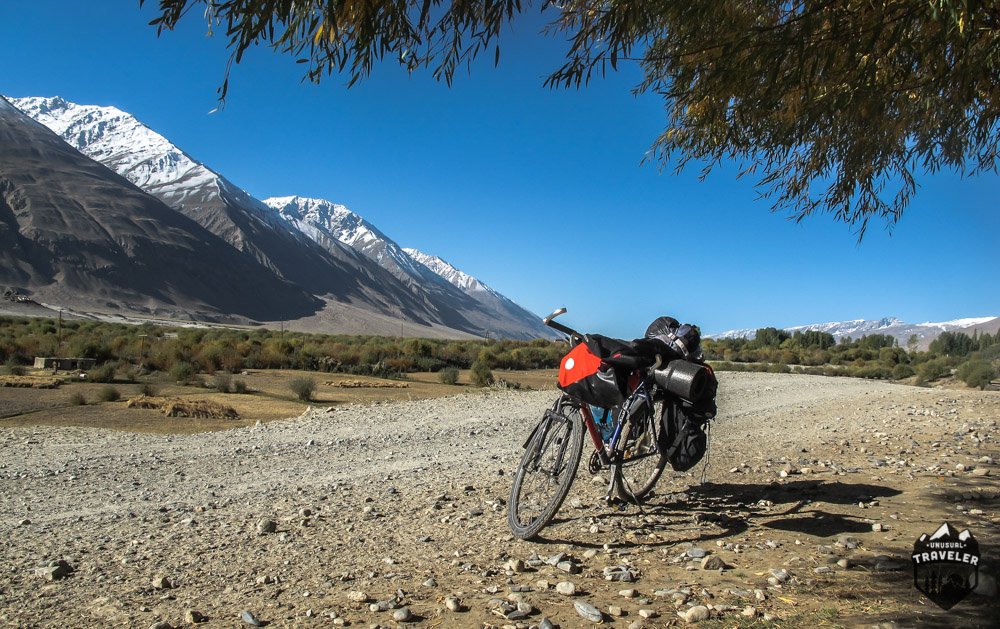 From Khorog (where I finished the first part of this Tajikistan bike adventure) to the end of the road in the Wakhan Valley is about 320km (199 miles).

When travelling south from Khorog, Ishkashim is the first town you will encounter (110km/68miles).
Ishkashim is the most famous village in the Wakhan Valley; there’s a famous border market every Saturday, held between the two borders on the Afghan side of the Panj River.

Unfortunately, I passed trough Ishkashim on a late Sunday evening, and I started to get close to the expiring date on my visa, so I had no time to spend six days waiting around Ishkashim just to visit the market.

All the local seemed pretty used to foreign tourists here, and “all” kids were nagging me for chocolate. 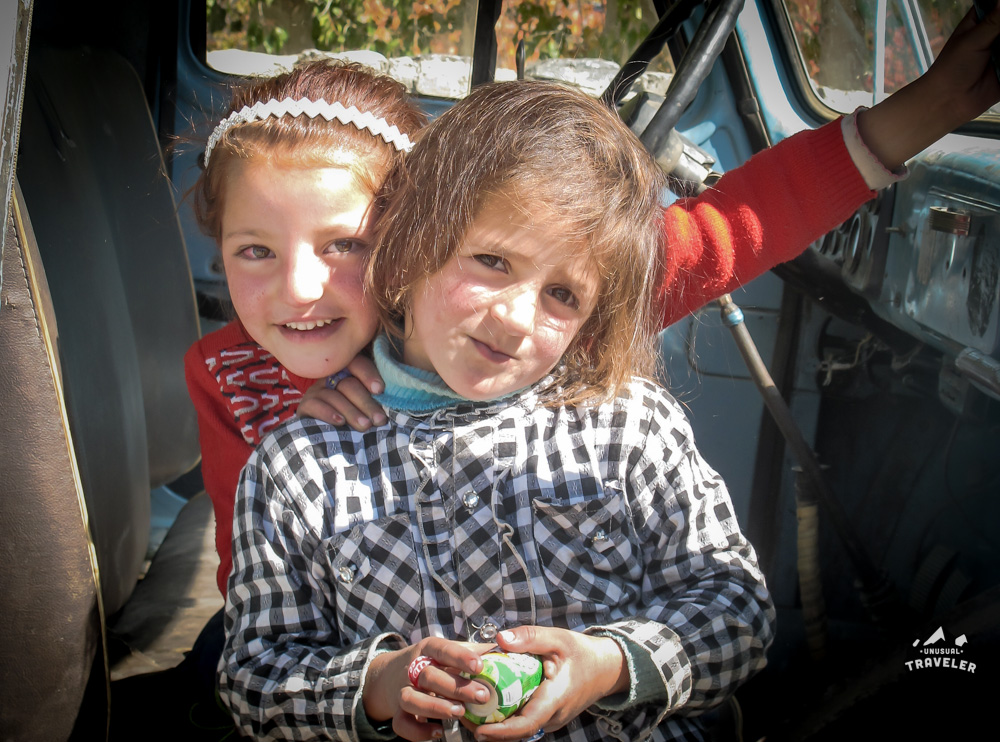 Two of the local kids in Ishkashim. 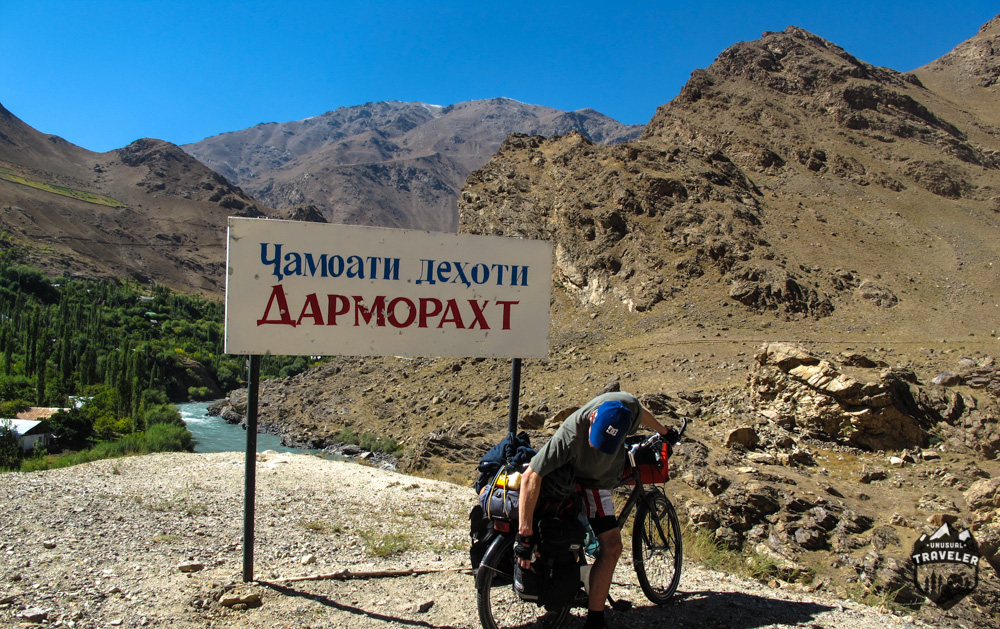 I’m not ALONE, another biker:)

There are a few ancient forts along the Wakhan Valley, they would have been easy to reach with a car, but a real struggle with a bicycle.
So instead of spending a hard day of climbing, I continued towards the small settlement of Zong.

A shrine, just outside of Zong, the horns are from the legendary Marco Polo sheep.

The Shrine that’s located just outside of Zong is a famous photo stop for everyone that comes through. There are Shrines similar to this one located all over the valley, but this was the far the biggest one I have seen.

Biking slow and enjoying the scenery.

From Zong is there only a few Km to the small settlement of Vrang.

Vrang is a very popular stopover place for people travelling through the area; it didn’t take long from I stopped in the village to have a small rest before I was surrounded by a big group of local kids that spoke the best English that I have heard in a while, they all wanted to show me the famous sight of the village, the Vrang Buddhist Stopa and caves.

The Vrang Buddhist Stopa is a construction, believed to have been built in the 4th century, thought to be used in some of the oldest religious rites in Central Asia. The locals also claimed that the platform was originally a Zoroastrian worshipping site.
The Stopa is built up of 5 layers of stones and offers a great view over the valley. The locals even claim that on the top stone, you can see a footprint from Lord Buddha himself.

There are a few hermit caves surrounding the area too; the locals claim also they were used by Buddhist monks residing the area back in the 4th  century.

I ended up spending two days in Vrang, just resting and repairing some bike problems.

Local farm work in Vrang, no heavy machinery in this area.

Getting Sheep blocked on the way out of Vrang.

Still Green, but from now does it become less and less of them.

The more east you get in the Wakhan Valley, the more barren does it become. Less and fewer trees but still as beautiful as heaven on earth.

The next and last village in the Valley is Langar. After that, there is a road that goes over the Khargush Pass before it reaches and connects with the M41 better known as the Pamir Highway.

The main street in Langar, the last village in Wakhan Valley

Langar is the biggest village in the Wakhan Valley after Ishkashim; there are shared jeeps running from Langar to Krough and Murgabb in the Pamirs once a week if enough people.
There are also plenty of drivers that are offering to drive you to Murghab for about 70USD.

I, unfortunately, had to hire a car together with two other travellers I met to get to Murghab. I really really didn’t want to do that, but I was running dangerously close to the end of my Tajik visa
.

Some small climbing towards Langar.

The mountains open up on the Afghanistan side of the valley and offer the view towards the Hindu Kush mountains. 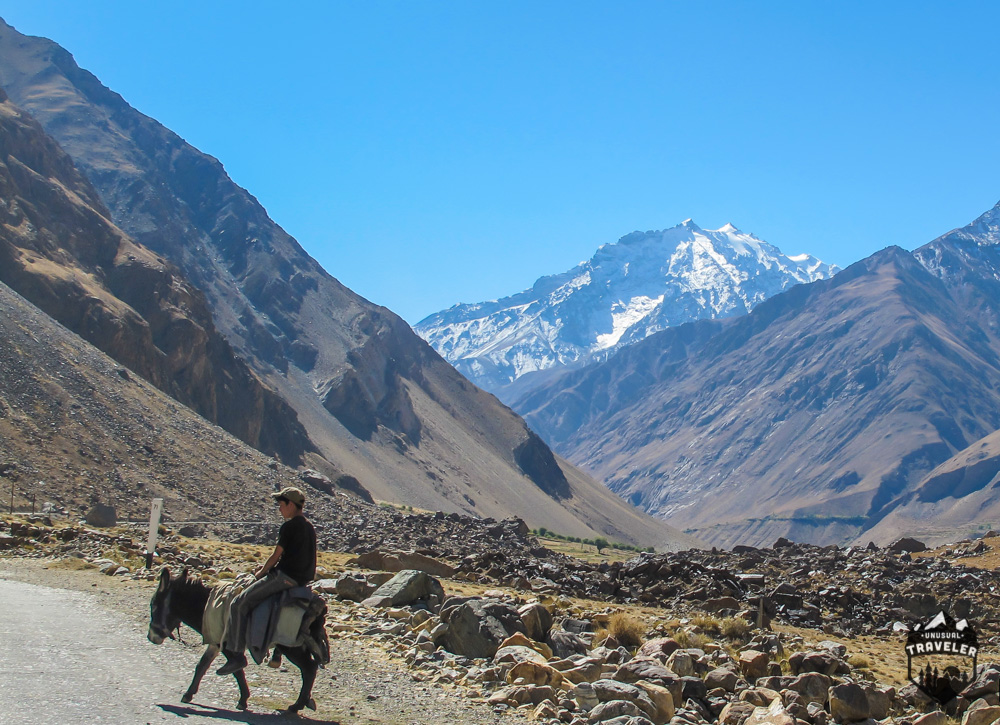 Riding Donkey is still a common use of transportation.

Watch out for the cars which cars? 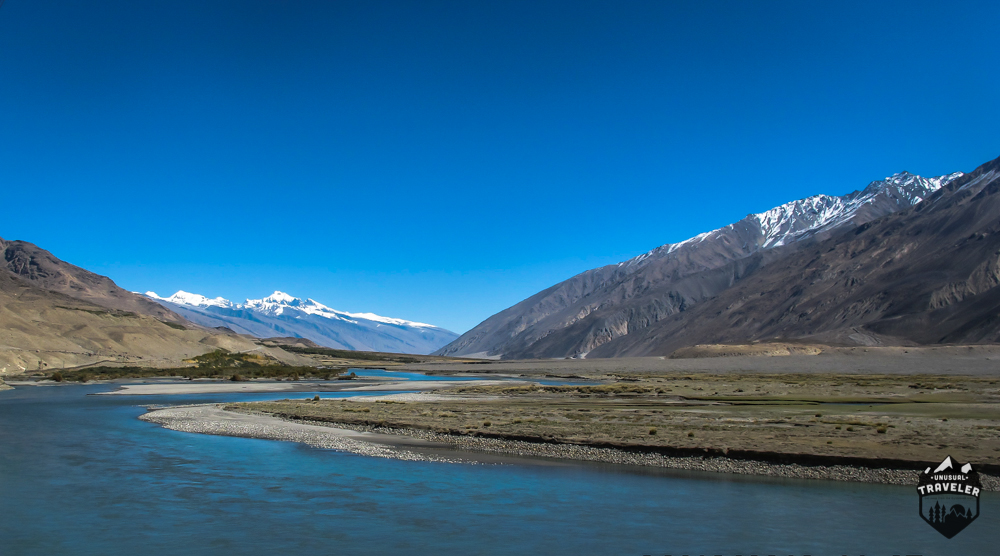 The Panj River that runs makes up the border between Tajikistan and Afghanistan. 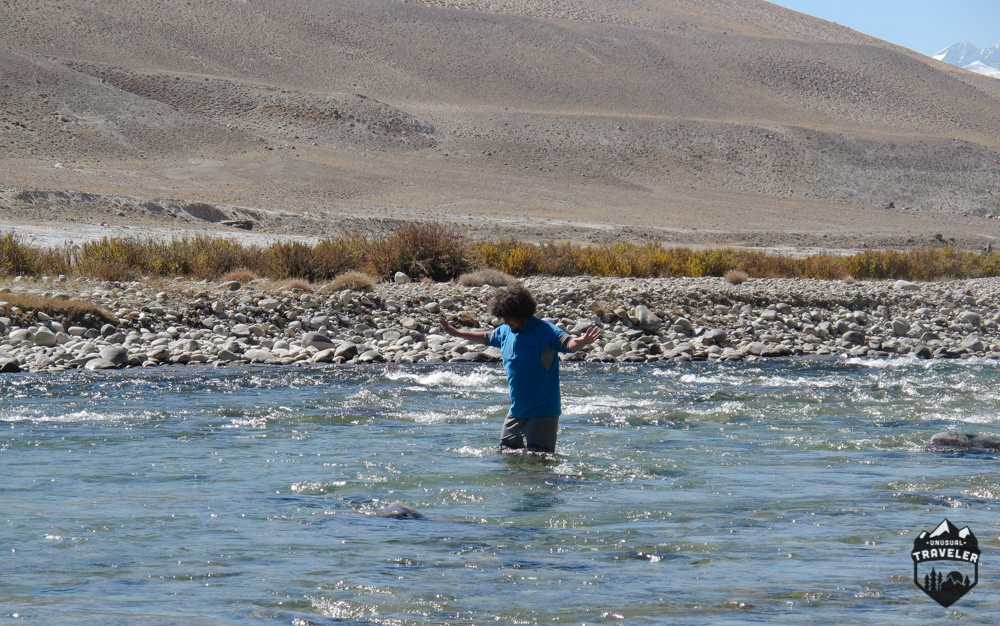 Crossing the river into Afghanistan illegally. 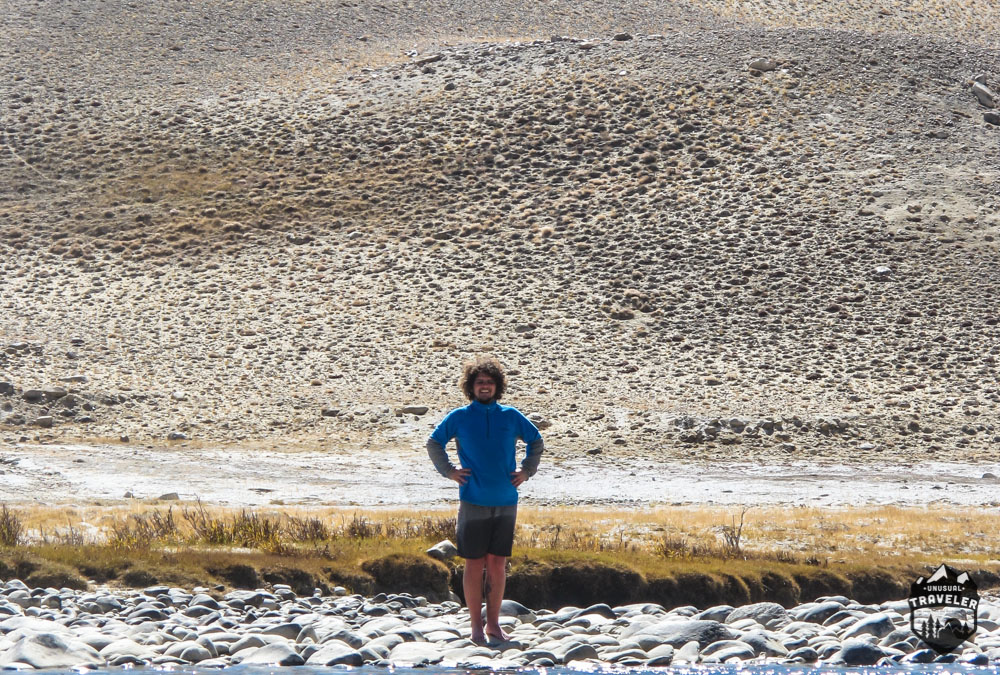 My trip from Langar to Murgabh and towards Kyrgyzstan along the Pamir Highway adventure will continue in another post.

Additional information about the Wakhan Valley.

There is NO ATM in Wakhan Valley, so be sure to bring enough cash. But you can pay for everything with USD.

You will need to have a GBAO permit to travel through the Wakhan Valley and later on the Pamir highway.

You must register with three different government agencies in Ishkashim (Tourist police, Ishkashim province police, and the military.) You will need four passport-sized photos for these registrations (women should have headscarf photo). You can get photos taken in Ishkashim.

You must also register with Wakhan province police in each village where you stay.

There was also some random checkpoints where they checked the permit.

Even the smallest village seemed to have a homestay; the price is 15 USD – 25 USD, it often includes breakfast, dinner, and unlimited tea.
But don’t expect the comfiest beds in the world. 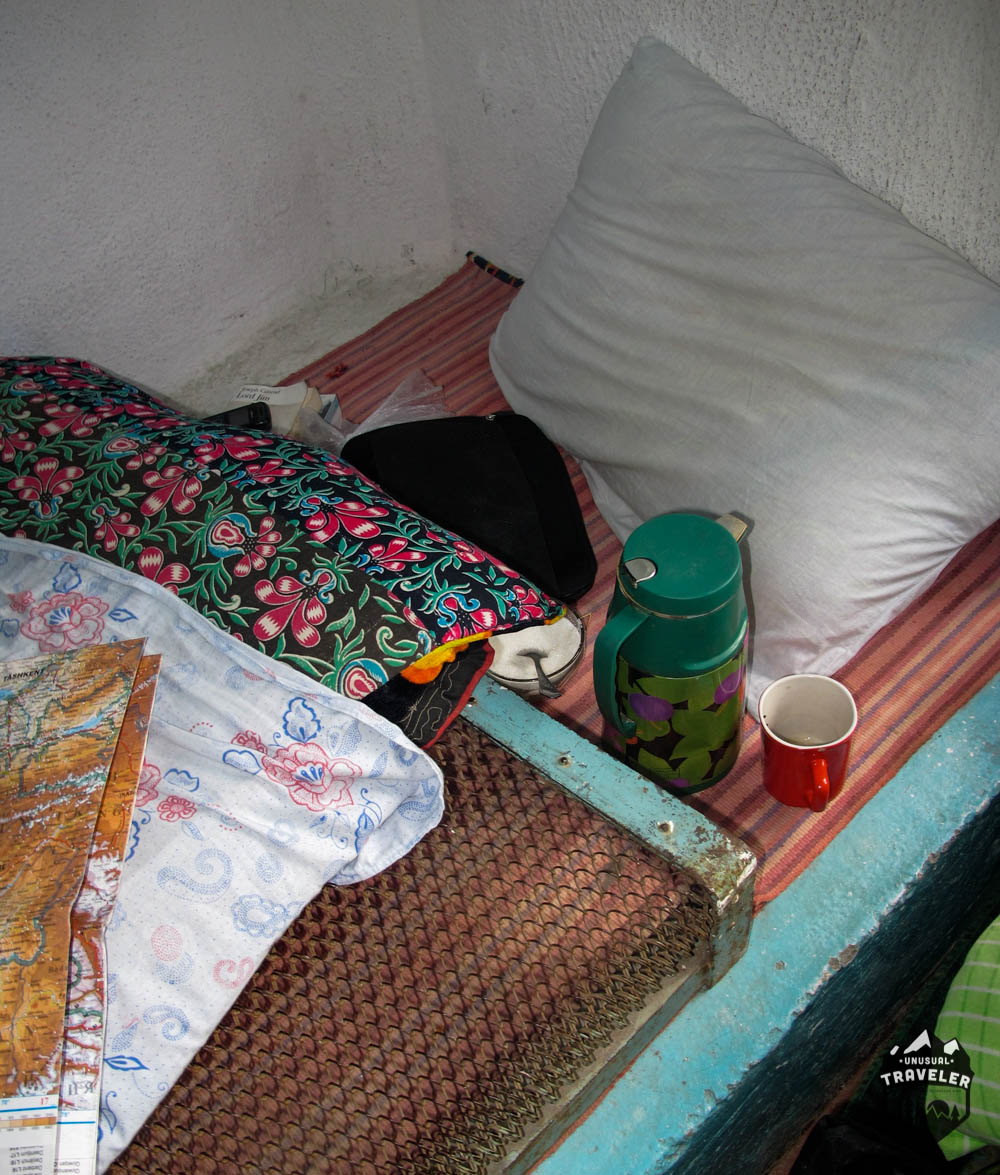 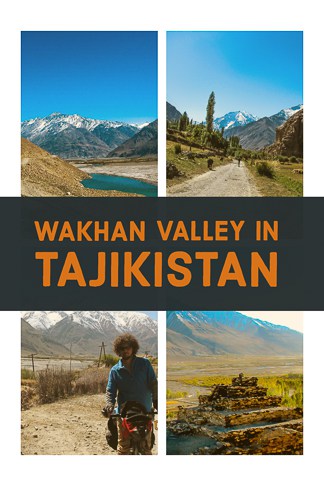