Top 13 Things To Do In Shanghai, The Largest City In China

Shanghai is one of the world’s most forward-thinking cities and the largest city in China when it comes to population.

It’s divided by the winding Huangpu River with the futuristic financial district on one side, historic waterfront buildings of The Bund, bustling shopping streets and ancient gardens on the other. 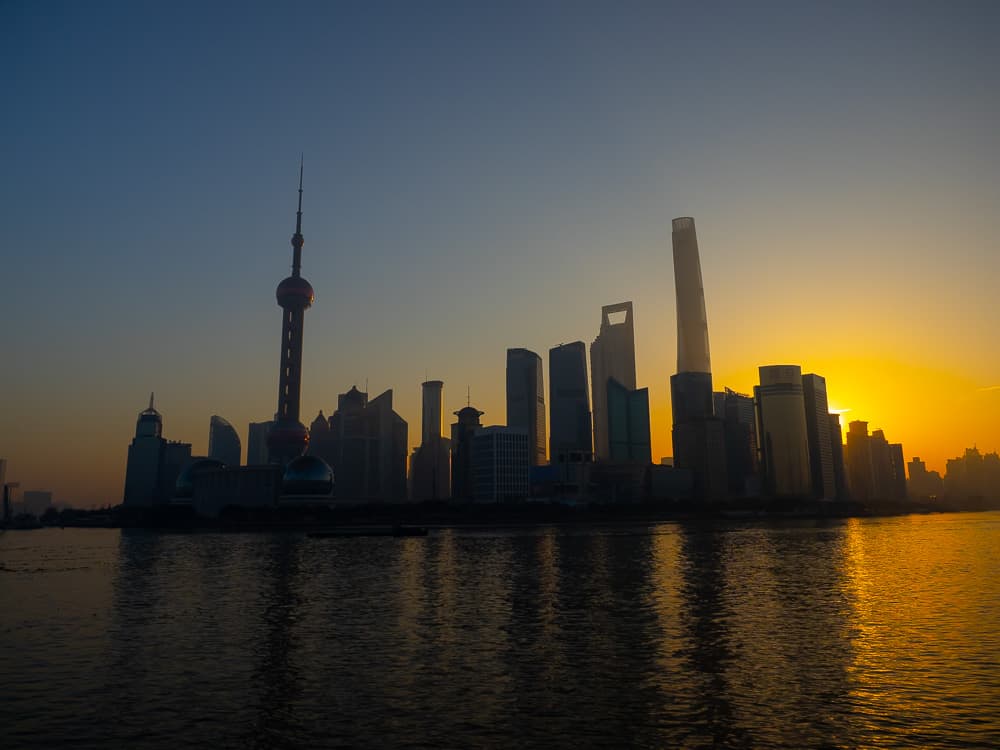 Also known as the “Pearl of Asia”, – Shanghai is a city of great contrasts and a must-visit location whilst in China.

If you would like to know what Shanghai has to offer, take a look at our travel guide and top things to do in Shanghai below!

While Beijing is the capital of China, so are Shanghai, the city with the largest population in China. 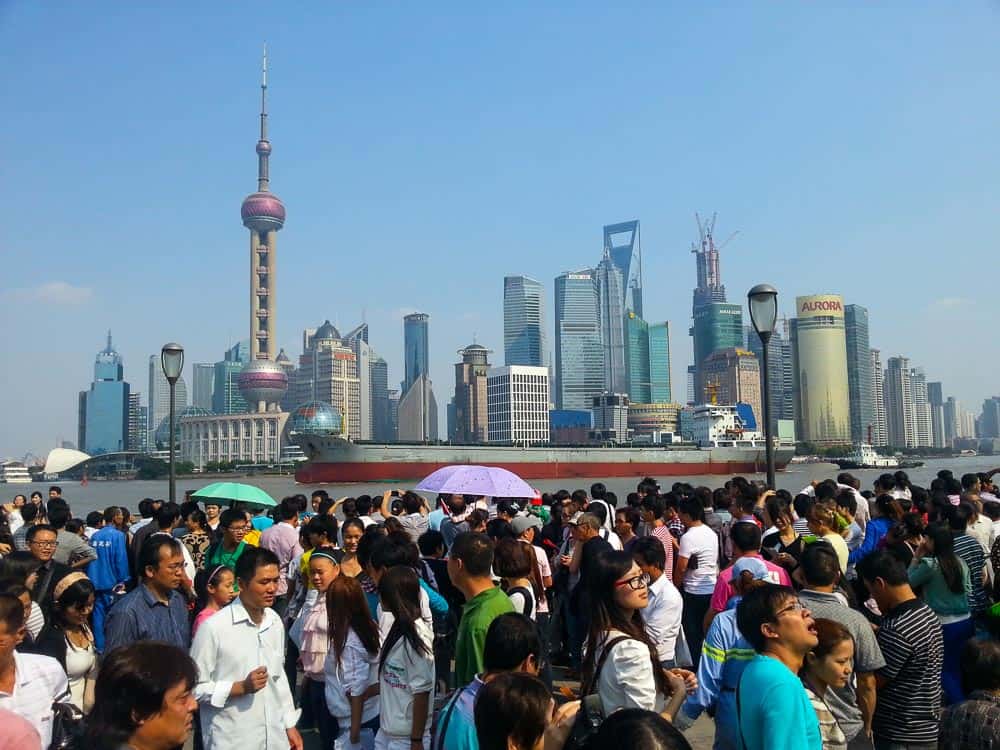 it can be very crowded during weekends and holidays.

Top Things to Do in Shanghai

The Bund is a sprawling 1.6-kilometre long riverside walkway on the banks of Huangpu River. 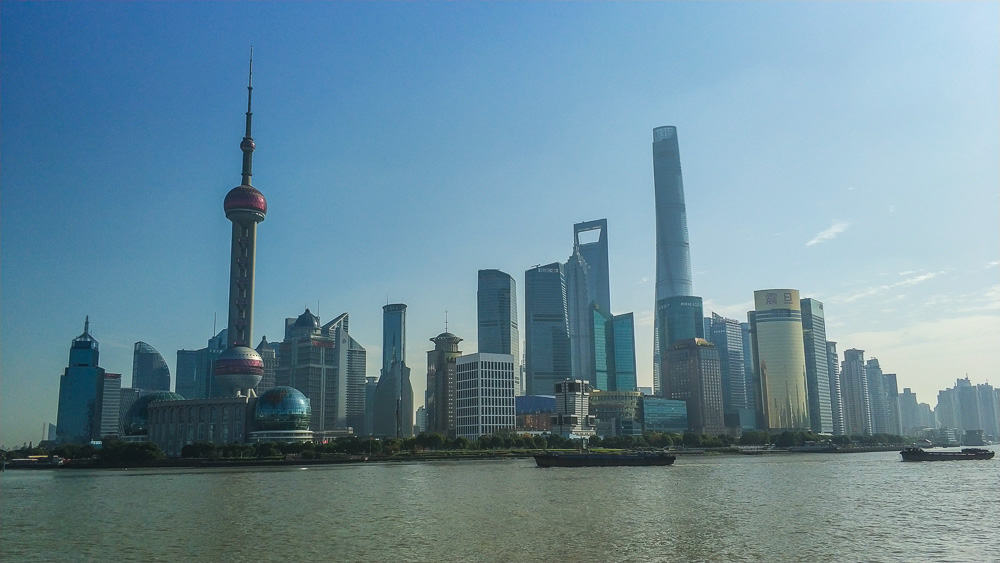 The Famous Skyline of the city

The waterfront is home to many of Shanghai’s oldest banks, consulates, government buildings and trading houses, consisting of over 50 buildings constructed in architectural styles ranging from Romanesque Revival to Neo-Classical, Beaux-Arts and Art Deco.

The area offers incredible views and photo opportunities of the Oriental Pearl TV Tower and modern glass skyscrapers of Pudong across the river.

Sunset over the skyline

There’s also plenty to see and do near The Bund with 19th century Huangpu Park to explore and Bund Sightseeing Tunnel (which is absolutely not worth the money) – a psychedelic light show and train ride beneath the river!

A landmark of the city and one of the most recognisable and futuristic structures in Shanghai is the Oriental Pearl TV Tower. 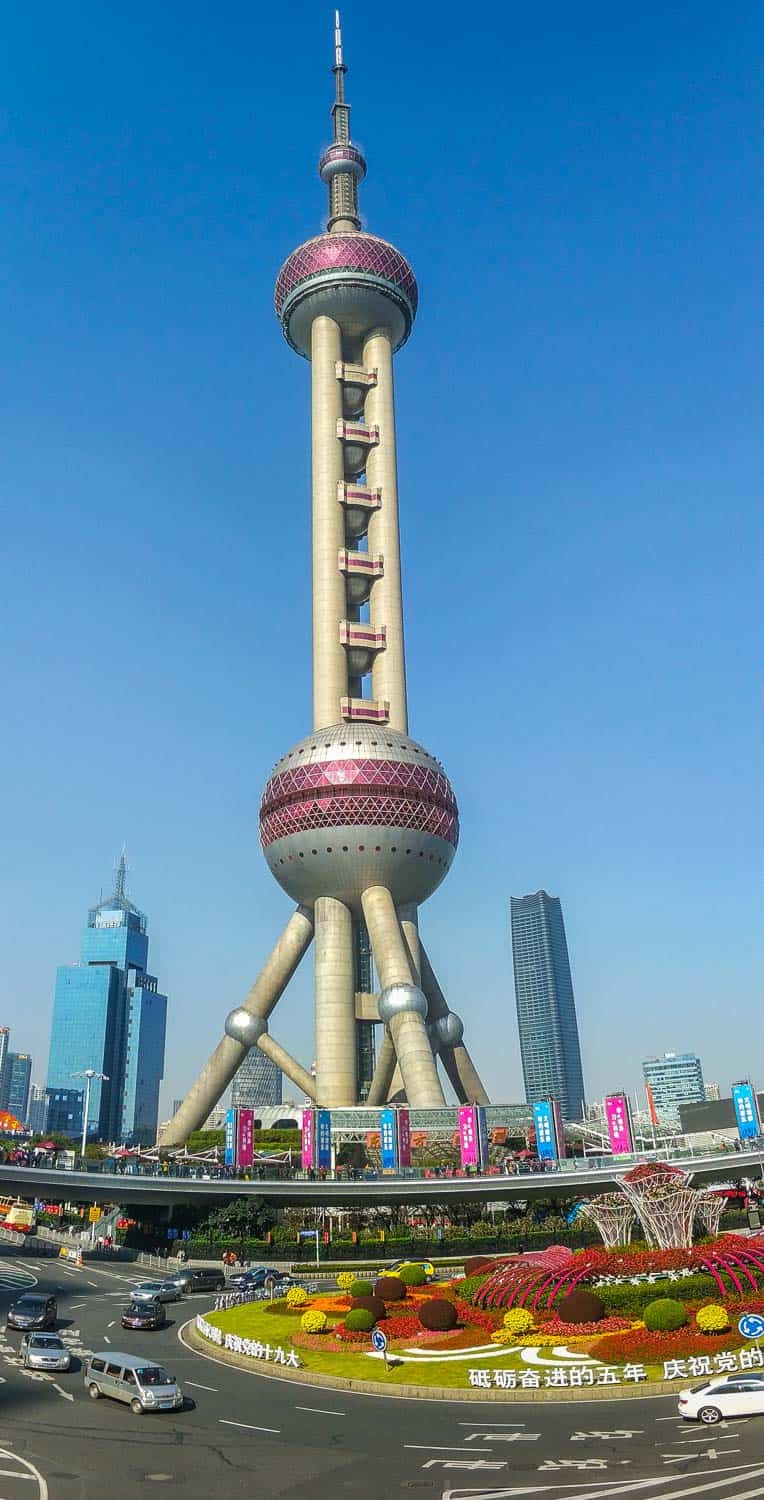 The 153-floor tower completed in the mid-1990s illuminates at night with bright LED sequences, which can be seen throughout the city.

The Oriental Pearl TV Tower. has 15 observatory platforms, each offering a different perspective of the cityscape, plus there’s a revolving restaurant, small shopping centre, interesting exhibits and 20 room hotel located between the two largest spheres! There´s also an aquarium at the bottom of the tower. 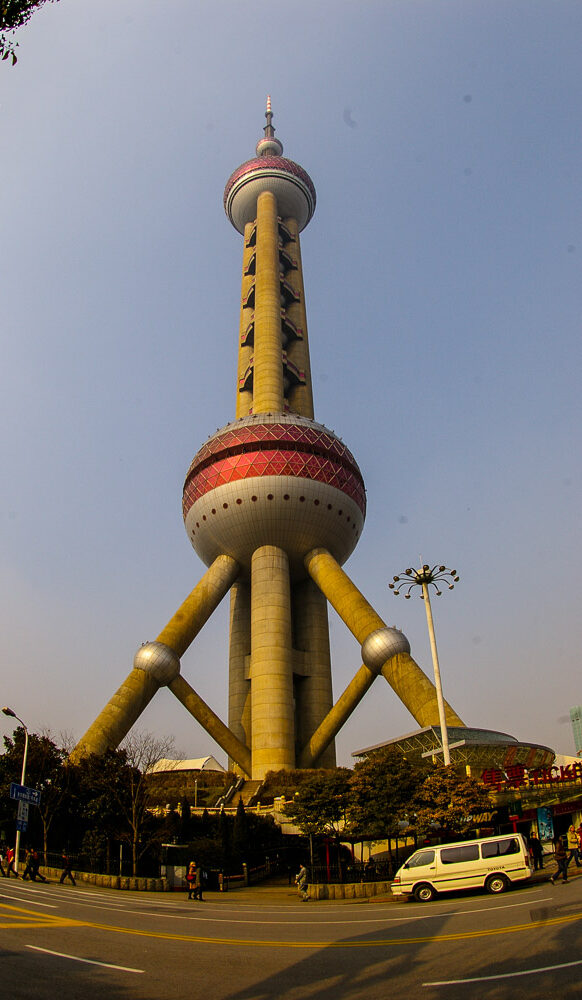 The main shopping street in Shanghai stretches for over 5 kilometres from The Bund to Jing’an Temple. Nanjing Road is to Shanghai what Wangfujing is to Beijing. While not much else than shopping for foreigners, so are both streets historical important for locals an important site for Chinese in both cities.

Nanjing Road is the most famous and popular shopping street in the city, but you are better of staying away during public holidays. 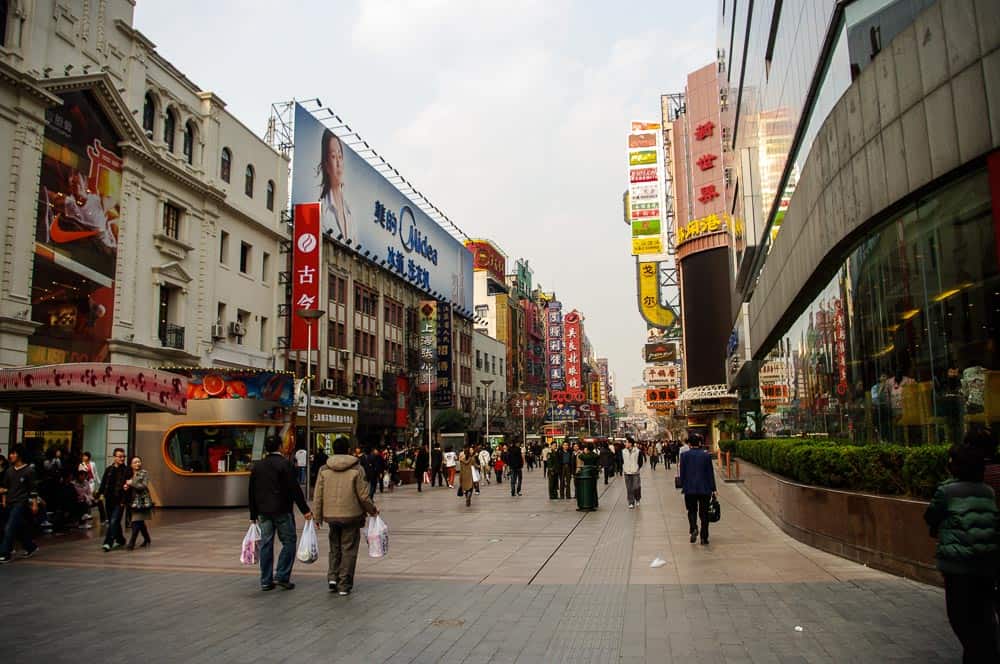 In contrast, Nanjing Road West boasts hotels, upscale designer shops, temples, Madame Tussauds Shanghai, and it even has the largest Starbucks branch in the world with its own roasting facility on-site!

If you’re seeking a treat for yourself, souvenirs or the latest electrical gadget, you’ll find everything you desire on Nanjing Road. 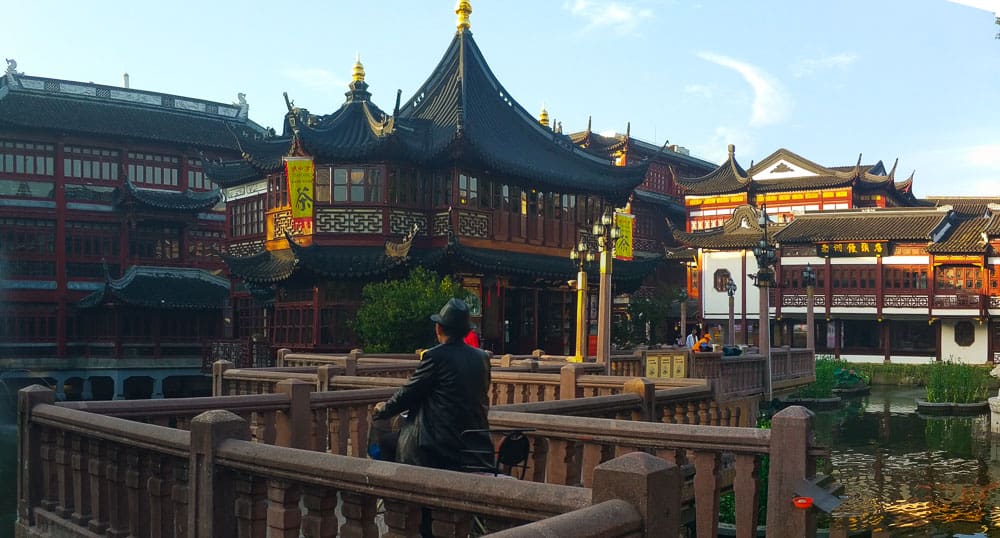 Tucked away in Huangpu District in Shanghai is the classical Yu Yuan Garden or “Garden of Happiness”.

The Ming dynasty garden may be a small, enclosed area in the old city, close to the colourful Yu Yuan Bazaar, but this beautiful garden is a peaceful haven where you can explore pavilions and ponds, admire ancient rockeries or sit beneath willow trees watching Koi fish swim. 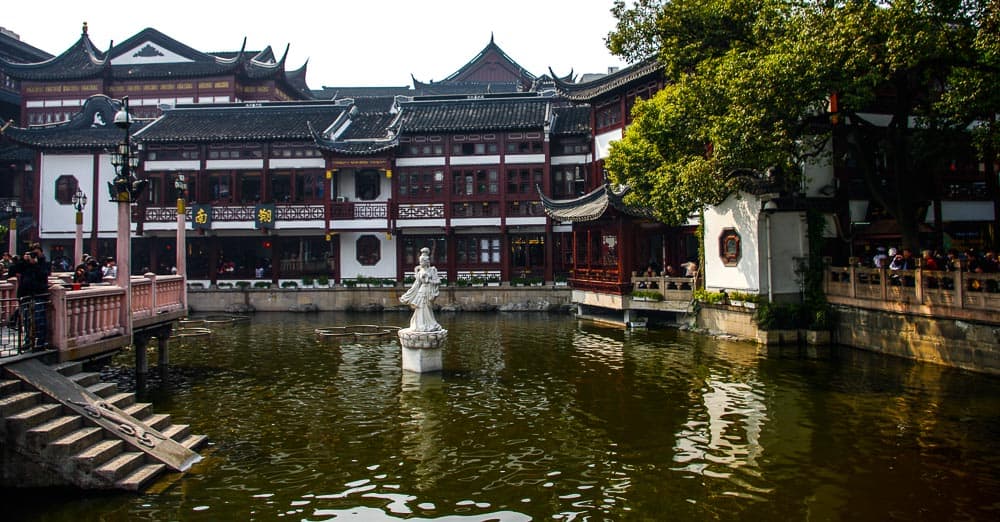 It’s the perfect spot to escape the crowds and gives a feeling of stepping back in time into ancient Shanghai. 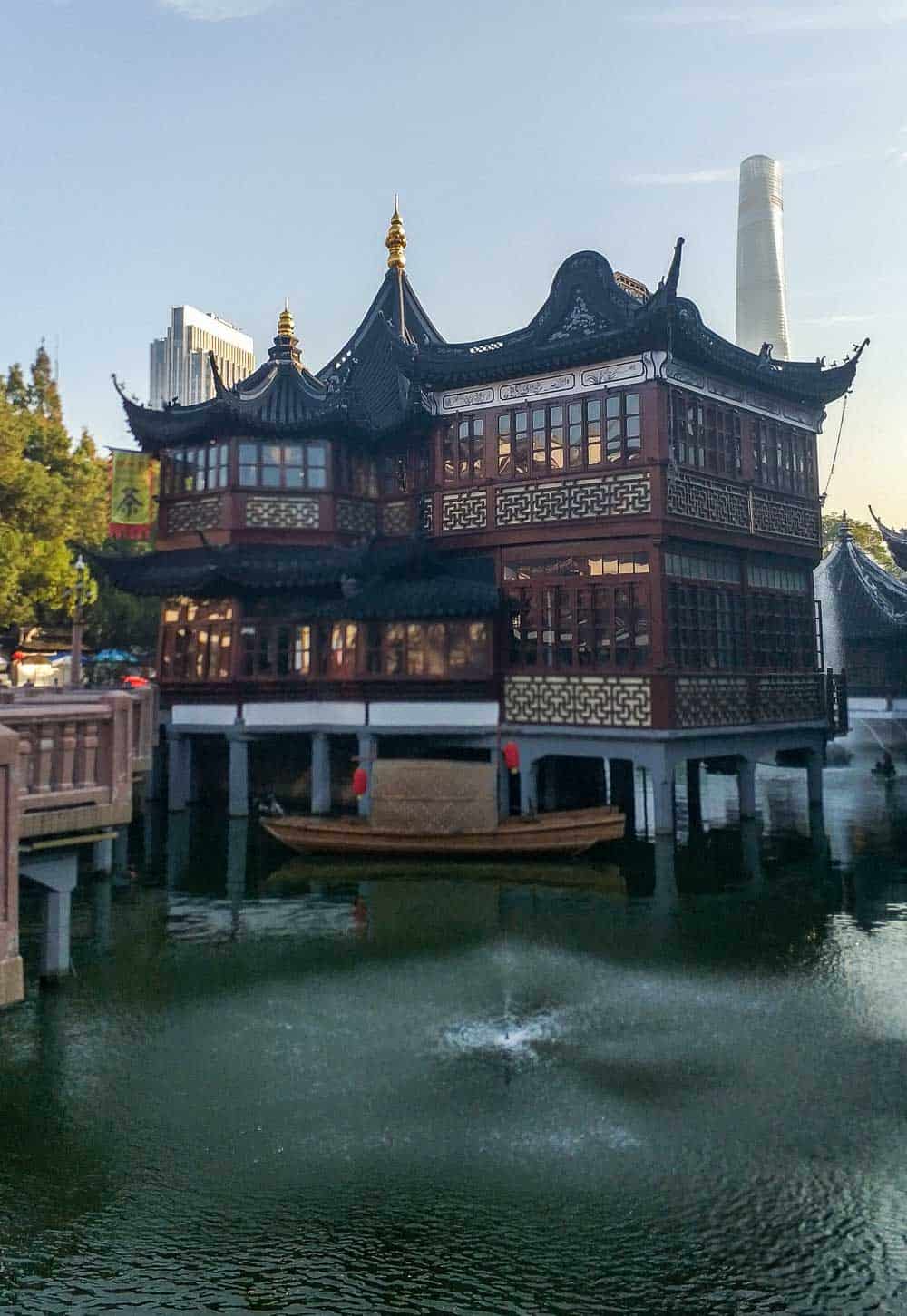 The old and the new

Visit in the evening when bridges and pagodas are illuminated or enjoy Chinese New Year here when the whole area is bedecked with magical glowing lanterns and ornamental dragons.

Located on the site of People’s Square, Shanghai Museum is a world-class exhibition centre showcasing over 120,000 collection pieces across 11 galleries and 3 temporary exhibition halls.

Expect to see everything from unusual Chinese ceramics and furniture pieces to jade, paintings, coins and sculptures!

Highlights include a transparent bronze mirror dating back to the Han dynasty, Ming dynasty style furnishings and ancient coins, which were discovered along the Silk Road.

Shanghai Museum is a must-visit for anyone interested in Chinese history or culture, and as it sits at the end of Nanjing Road West, it’s the ideal place to unwind after a hectic morning of shopping!

Shanghai has, over recent years, become one of the top destinations in Asia for craft beer lovers together with Ho Chi Minh City In Vietnam.

These days there are 9 local craft beer breweries and tens of craft beer bars all over Shanghai, and even big international craft veer breweries like the Scottish Brewdog and Danish Mikkeller have opened their own bars in the city. 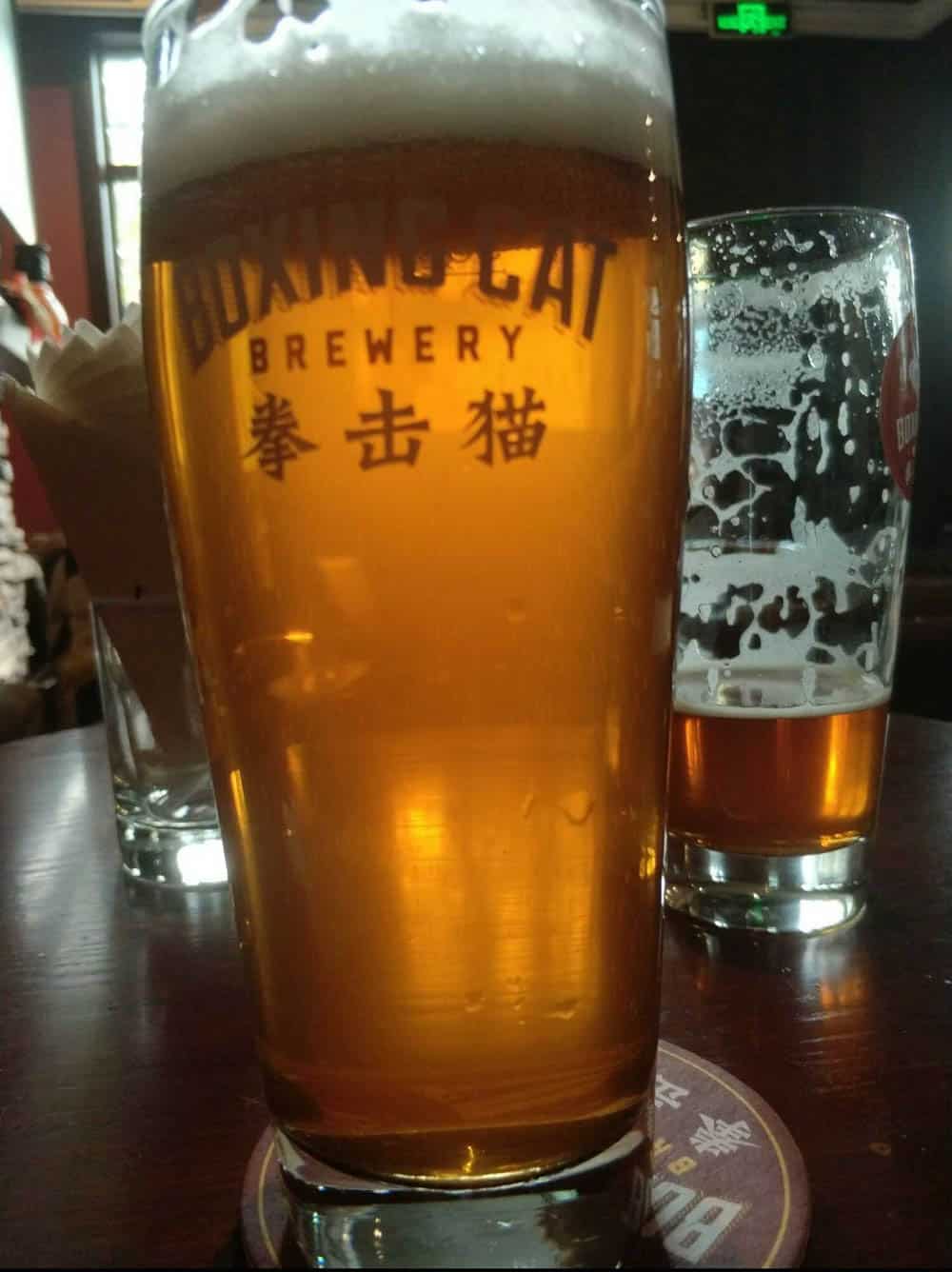 The most famous local brewery is the Boxing cat brewery which now has two locations in the city, or you can head to the “Beer Lady”, which has 3 different locations around Shanghai; while it doesn’t brew its own beer, so do they have thousands, yes thousands of different beer, it might be the bar with the best beer selection in the whole world.

Here you can try almost every Chinese craft beer, and most of the beers from Asia, and even rare beers from Europe, Australia and North America, often for a lower price at the Beer Lady than you would find them at home.

The French Concession, once the French part of Shanghai, now a historical part of the French neighbourhood, is better known as Tianzifang, a place that is often frequented by a young, bohemian crowd.

Narrow alleyways are lined with bars, cafes, craft shops and galleries, and there are several old Shikumen houses – traditional to Shanghai with well-preserved stone framed gates.

The district was transformed in 1998 when Chen Yifei, a local contemporary artist, acquired two disused factories in Taikang Road and converted them into art and photography studios.

Today, there are almost 30 art and design studios, around 60 craft shops and art galleries and numerous boutiques. This area has a great international café and restaurant culture, too, with American grills, Thai and Japanese eateries on offer. 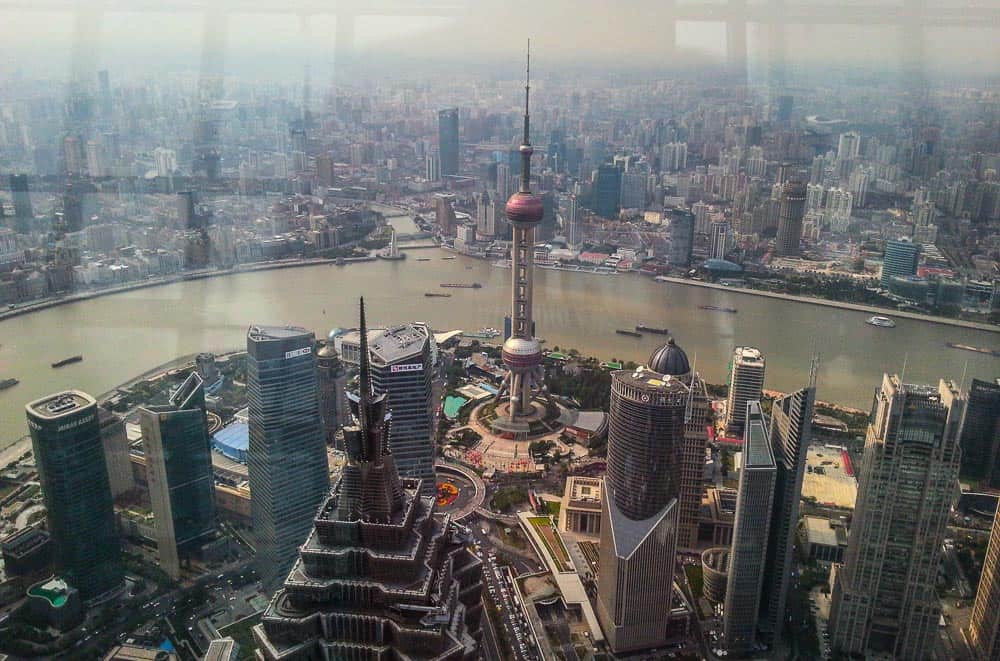 View over shanghai from the Jin Mao Tower

This tower is one of the tallest buildings in the world (but only the 3rd tallest building in Shanghai) and home to the famous Sky Walk. The 88-storey structure has a glass-bottomed skywalk which you can stroll along – with the aid of a rope and carabiner clipped to a rail!

As you navigate the building from a great height, you will be able to see all of Shanghai, but if that sounds a little too daring, you can stay behind the glass on the observation platform and still gain incredible views and photos.

Shanghai, being a cosmopolitan hotspot, boasts a number of Cantonese, Italian, French and vegetarian restaurants. With new world-class restaurants opening almost every month somewhere in the city.

However, it may surprise you to know that Shanghai also has its own unique cuisine called Hu or Benbang cuisine.

The elements of these local dishes are the same as in other Chinese regional cuisines, yet the city draws focus to high-quality raw ingredients and seasoning, with many dishes pickled in wine to give them a shiny red sheen.

The popular sweet and sour dish is typical of Shanghai, as is rice with salted meats and preserved vegetables drizzled in a sweet soy sauce.

Whilst in the city, try their specialities – deep-fried mandarin fish steeped in hot broth, beggar’s chicken wrapped in lotus leaves, pork meatballs cooked in a pot and Su-style noodles – a type of soup topped with meat!

Enjoy a Cruise Along The Huangpu River

One of the best and most tranquil ways to experience Shanghai is from the water on a river cruise along the Huangpu River.

Walk along the Huangpu River or take a cruise.

These popular cruises take in awe-inspiring vistas of The Bund, Waibaidu Bridge, Shanghai Expo, Oriental Pearl TV Tower and Jin Mao Tower and the rest of the impressive skyline.

The cruises offer incredible photo opportunities, and there is even a bar, sundeck and restaurant where you can nibble on snacks as you glide along!

The cruises operate daily from around 11.00 to 21.30, so you can experience the city from a daytime and evening perspective if you wish! 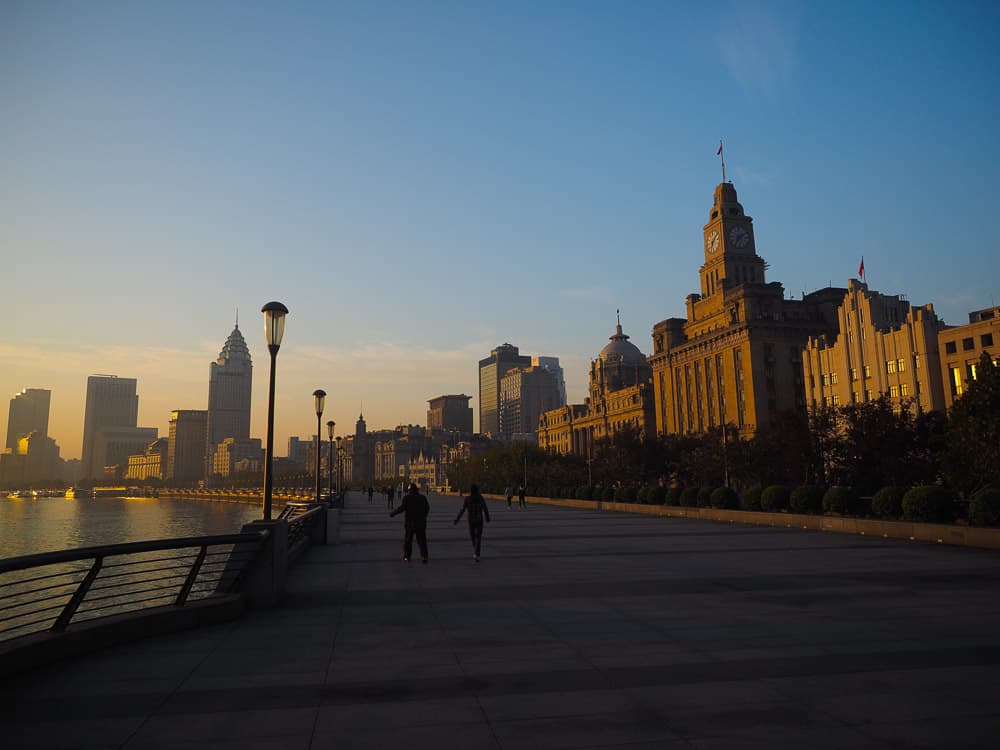 A Walk around The Bund

Rent a Boat and relax in Century Park

The largest green space in Shanghai – Century Park is located in Pudong, New Area, close to the city’s science and technology museum.

This picturesque park is the perfect place to escape the hustle and bustle of the city with grassy lawns, woodland walks and lakes.

It is divided into several areas with a Nature Reserve – abundant with birdlife and over 50 tree species, a Folk Village – a natural wonderland with a lake, centuries-old ginkgo trees and a white beach and an Exotic Zone – home to 3,000 plum blossom trees in full bloom during winter and spring.

Spend a leisurely afternoon strolling beneath the palm trees, cycle along enchanting woodland pathways or rent a boat and drift along the water, at one with nature.

Step Back In Time at Zhujiajiao Water Town

Zhujiajiao water town is located 50 kilometres from central Shanghai and can be reached by subway on Line 17.

This tranquil water town was established around 1700 years ago – a place where rivers are lined with willow trees and stone cobbled pathways lead to bridges, Buddhist temples and ornamental gardens.

Enjoy a leisurely boat ride, admiring the wooden riverside houses, see historic buildings where rice and spices are sold or feast on delicious Chinese cuisine as atmospheric lights glow on the water as the sun goes down.

Zhujiajiao Water Town is one of the best and easiest day trips you can take from Shanghai.

If you’re travelling to Shanghai with family or just your kids, or simply wish to indulge your inner child, venture across the Huangpu River and visit Shanghai Disneyland!

The famous theme park is easily reached in around 40 minutes by subway, bus, taxi or car and offers attractions, adventures, rides and entertainment for all ages.

Enjoy a thrilling ride on the Roaring Rapids, get lost in Alice in Wonderland’s Maze or take a journey through diamond mines on the Snow White and Seven Dwarves train!

How to Get to Shanghai

Shanghai is China’s financial hub and gateway into the country for many tourists. Therefore it’s an easy city to reach from other countries.

The city has two airports – Shanghai Pudong International Airport, which operates flights to and from 90 cities worldwide and 60 domestic routes.

This airport lies 30 kilometres from the city centre and can be accessed via the Maglev train, subway, taxi or shuttle bus. 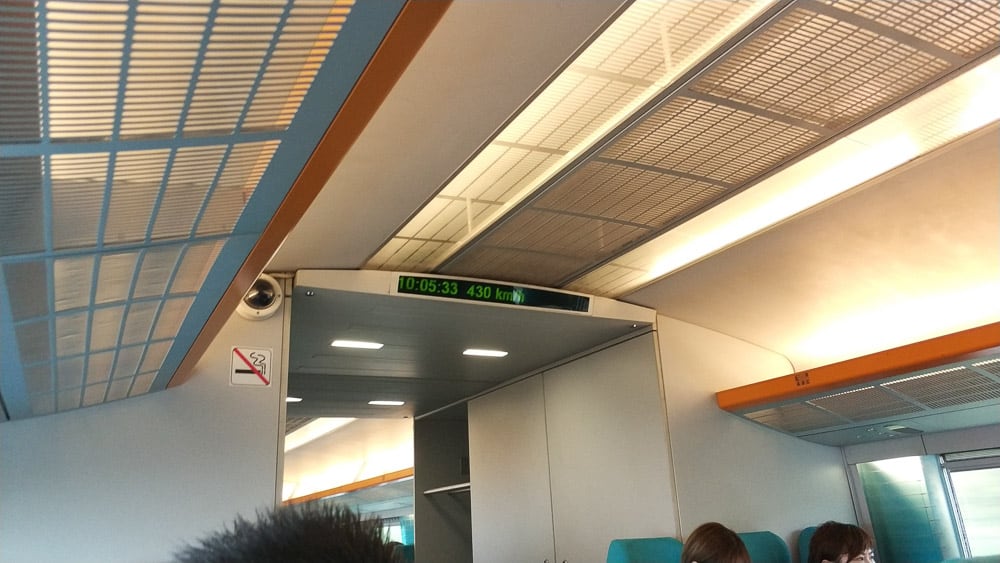 The Shanghai Maglev train is currently the fastest train in the world.

This airport, 13 kilometres west of Shanghai, can be reached via taxi, subway and shuttle bus.
Rail is also a popular way to travel throughout China.

With high-speed trains in abundance, journeys are quick and comfortable. Shanghai also have 3 different railway stations, so always be sure of which one you will arrive and depart from.

Each operates frequent trains to major towns and cities throughout China. 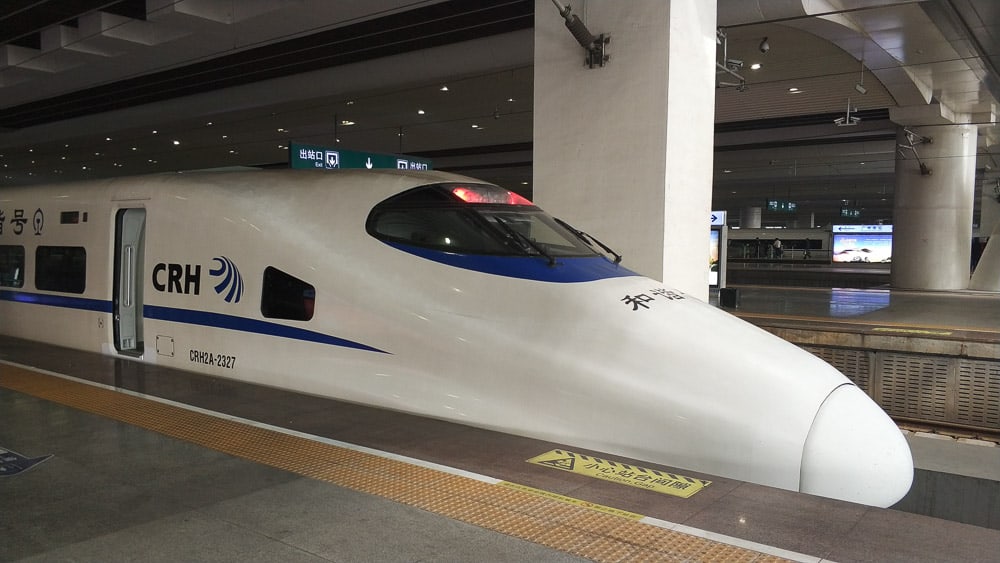 A journey by high-speed train to Beijing takes around 5 to 6 hours, making the capital a perfect option for a two-centre trip; if not, so are Chengdu 11 hours by Bullet train from Shanghai and Guangzhou is 7-8.5 hours away with the bullet train. 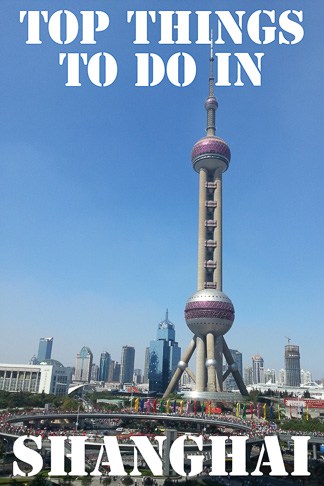 Travel guide and top things you should do in Shanghai, the largest city in China

11 Most Romantic Things To Do In Santorini, Greece
← Previous
How To Spend 1 Day In Los Angeles On A Budget
Next →
Click here to cancel reply.