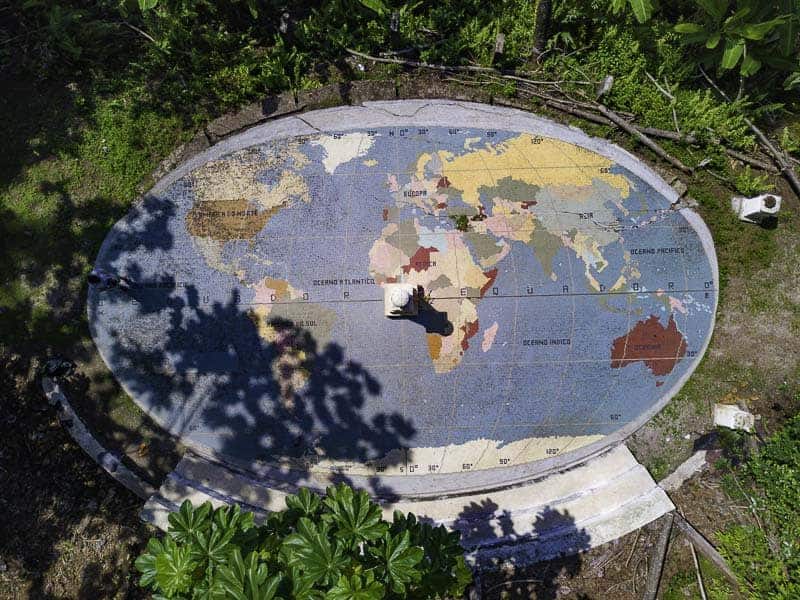 The Equator mark at Rolas island

The Southern Part of Sao Tome & Principe is probably the most touristy part of Sao Tome if you can say that about the island the roughly only sees 13 000 tourists a year.

The only country that gets closed to those numbers in Africa is the tiny country of Comoros with roughly annual 24 000 visitors. Another great country that I have visited recently in Africa. Click Here To Read About This Gem Of The Coast Of East Africa, One The Best Places To Swim With Whales In The World.

The Southern part of Sao Tome is where you will find the old abandoned Portuguese hospital, one of the most popular beaches in the country around Santana, the volcanic tower Cão Grande Peak the most famous landmark of Sao Tome & Principe, and the turtle sanctuary around Praia Jale.

Click here to if you are planning a trip to Sao Tome & Principe. 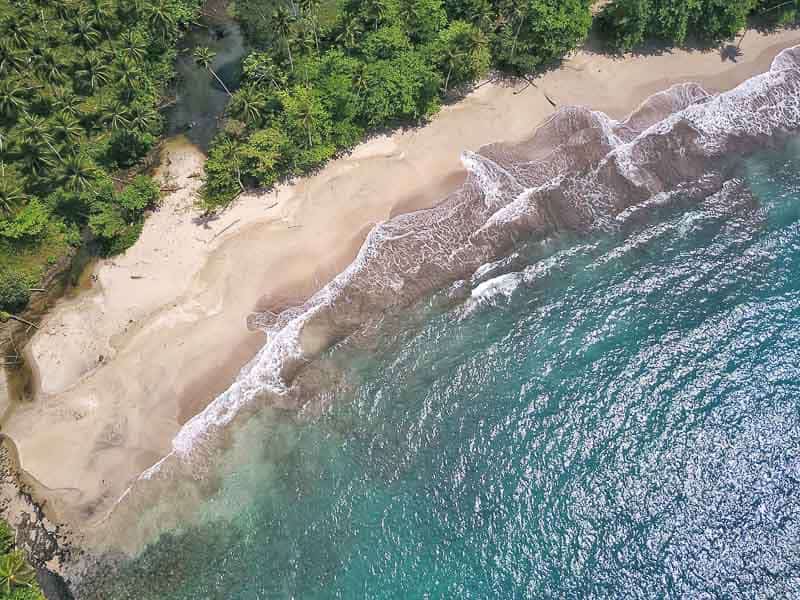 One of the amazing beaches along the southern coast, without people

And you will be able to cross the equator at Rolas Island. And since it´s only roughly only 74Km from Sao Tome city down to the south end of the highway at Porto Alegre so is it easy to visit all of the above sites in just a single day on a day trip from the capital.

Sao Tome only got 140Km/87miles of paved roads around the entire island.

The quality of the road on the southern part of the country is flawless, compared to the northern part that´s full of potholes everywhere. If you would travel directly from Sao Tome City to Porto Alegre with shared taxis would it take you just about one and a half-hour.

It´s easy and dirt cheap to take a shared taxi, but you will miss all the sights along the way since most of them are located a short detour off the main highway. 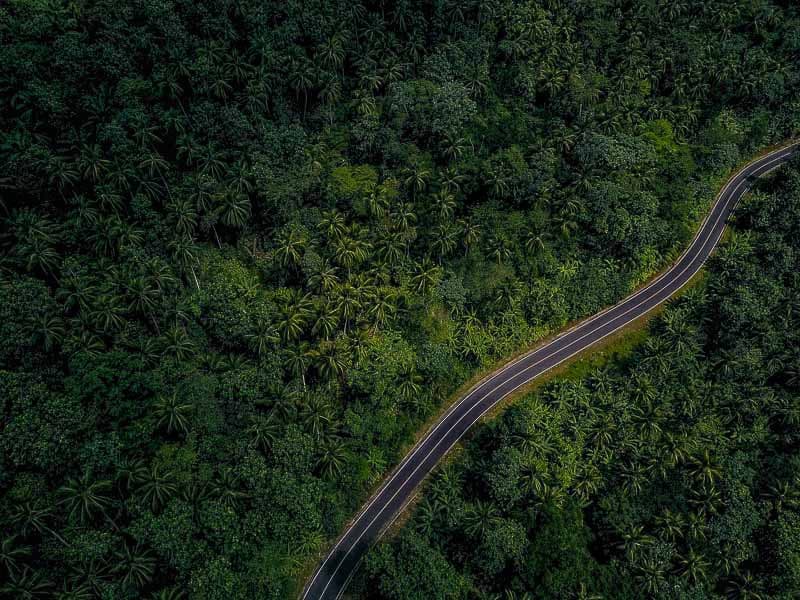 The road goes through the untouched forest.

The car I had for the day.

So your much better off renting a car for 40-50 Euro a day, or hire a car with an English speaking driver for 80 Euro a day, I went for the second option.

Driving yourself would have been very easy because of the quality of the road and the small number of other cars on the way. I probably saw less than 50 cars for the whole day.

Renting a car with a driver is good since he knows a few detours along the way, to visit a waterfall, viewpoints and beaches with no people on. I was happy that I choose this option.

While there are a few options of Accommodation along the southern coast, like Santana Club, Praia Jale, Praia Inhame Eco-Lodge (from where you will take the boat to Rolas Island) and Rolas Island being the two best options.
The accommodation options are great, located on pristine beaches, but also really expensive and hard to reach with public transportation.

So if your travelling on a budget, are you much better of visiting all the places on a full-day trip from Sao Tome City. 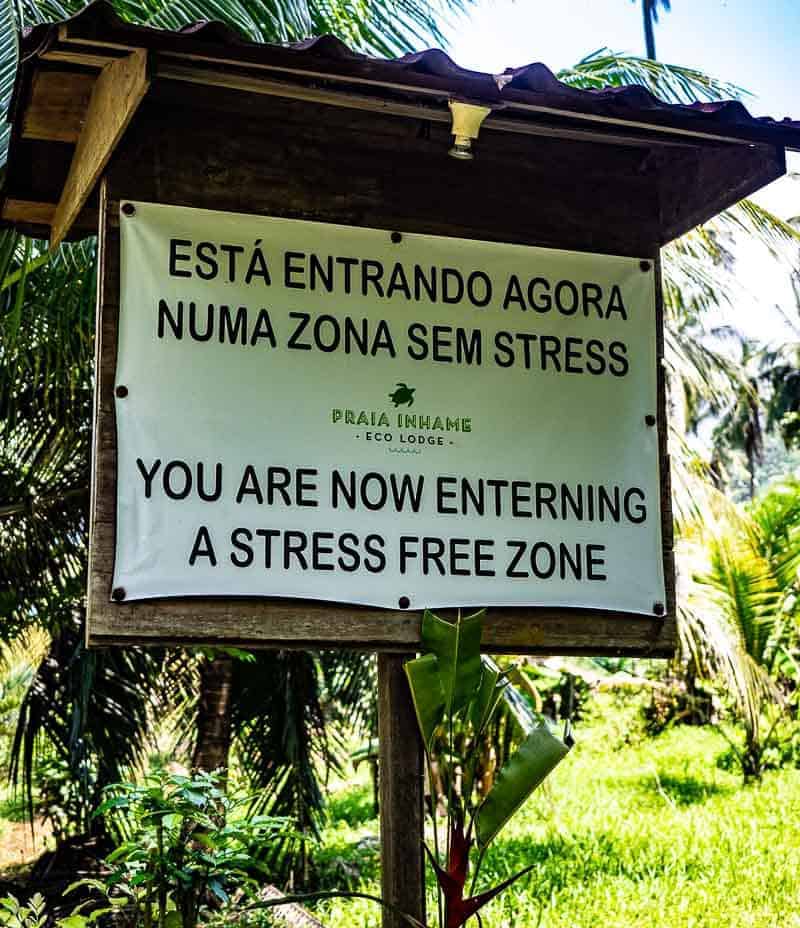 No stress. A sign on the southern part of the island.

The old abandoned hospital of Roca Agua Ize if the first site along the south coast about 17Km/10,5 miles south of Sao Tome City.
Roca Agua Ize was once one of the biggest cocoa plantations (2900 hectares) in all of Sao Tome & Principe. 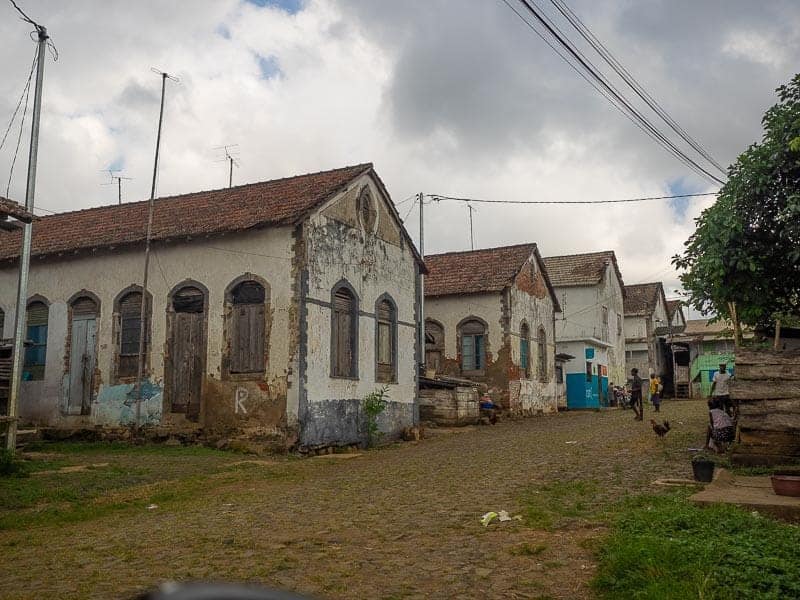 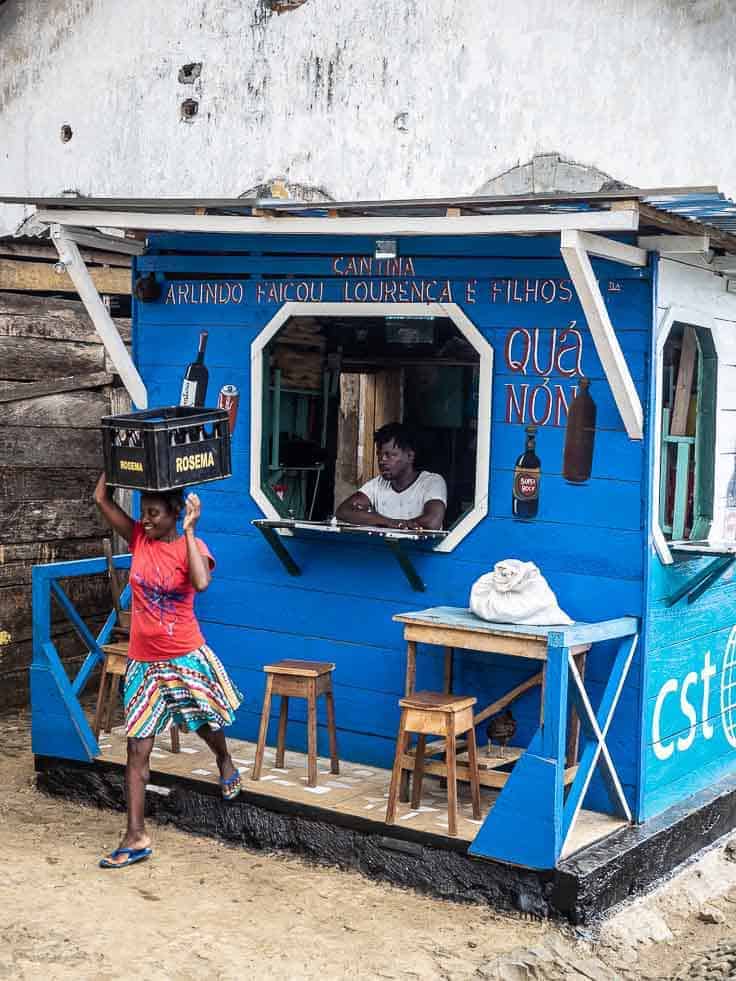 A local bar in the village, where I stopped for a beer.

The local workers had their own village that´s still populated with locals today, and it had its own Hospital that was built in 1928, Back then it was considered to be a state of the art hospital and the best in all of West Africa. Today has the ruins of the hospital become one of the most famous sites in all of Sao Tome & Principe. 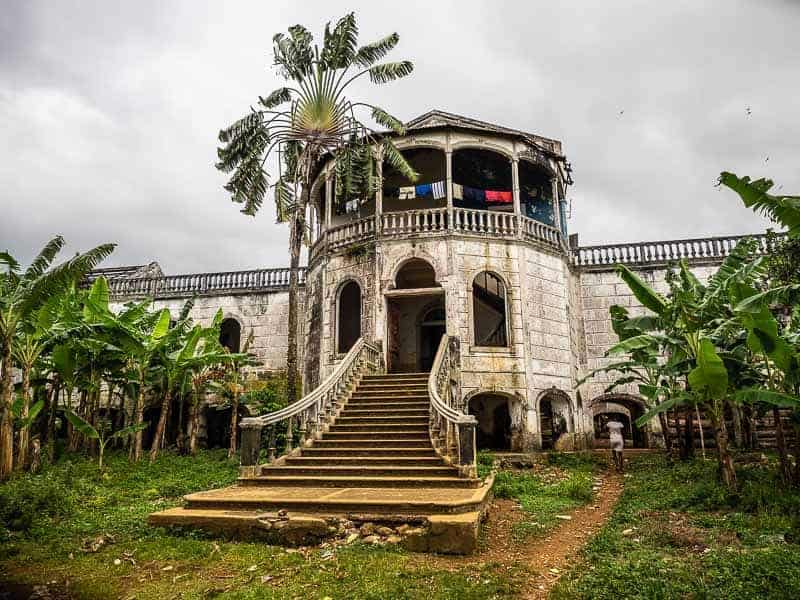 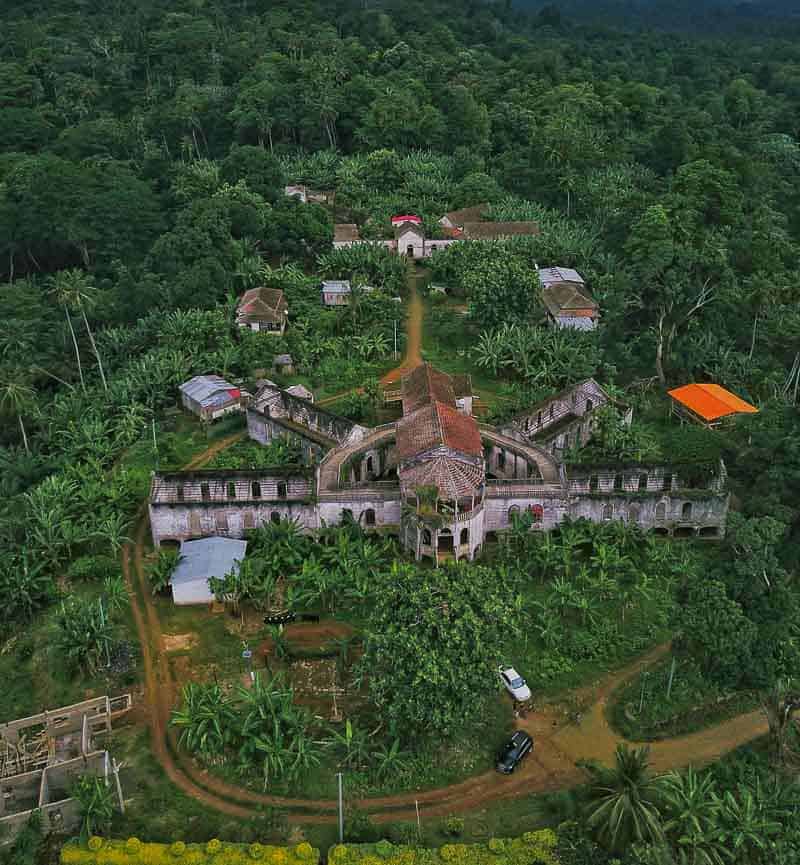 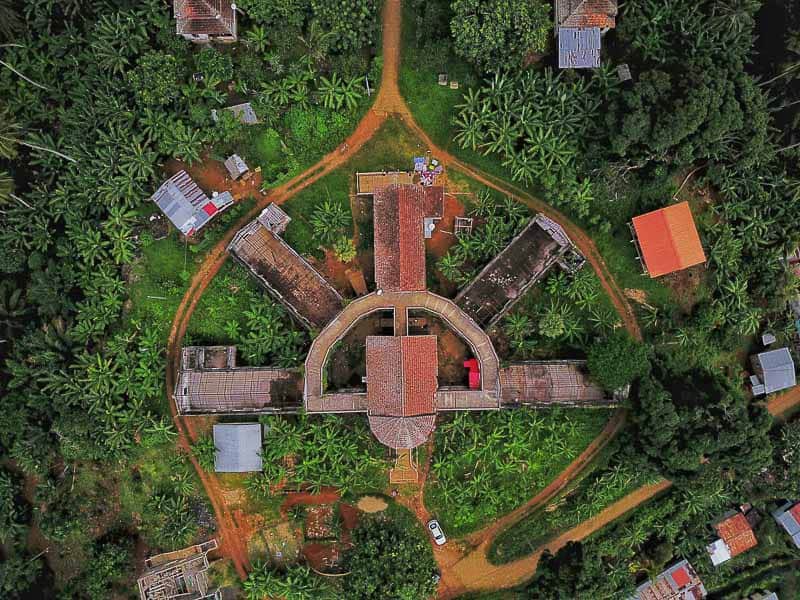 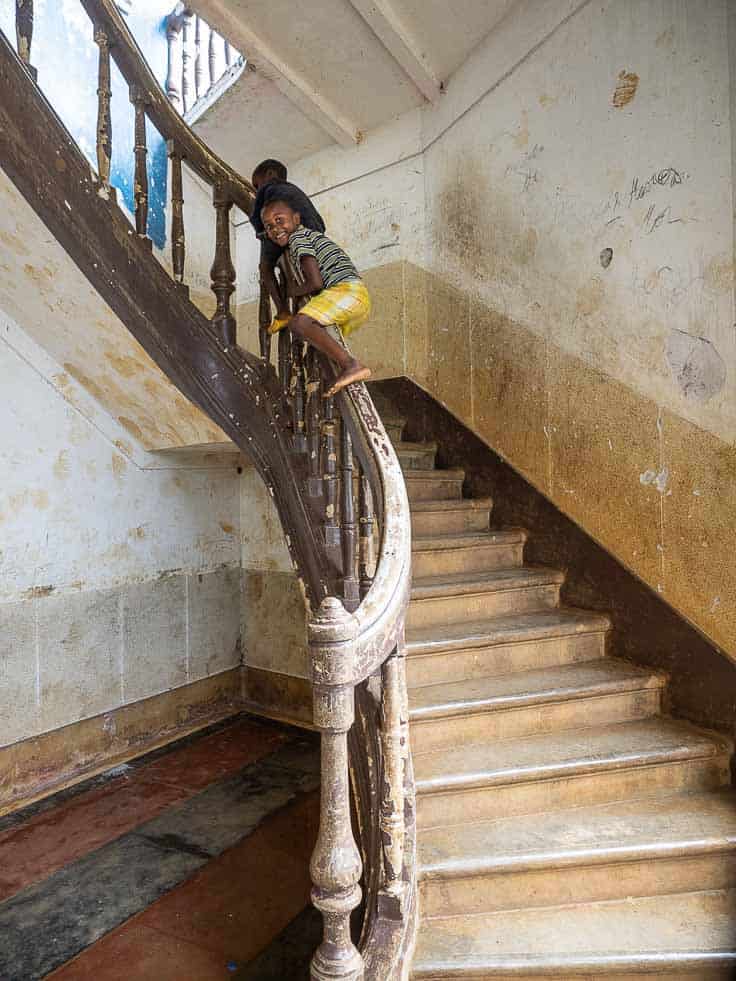 Locals are living inside the old hospital. 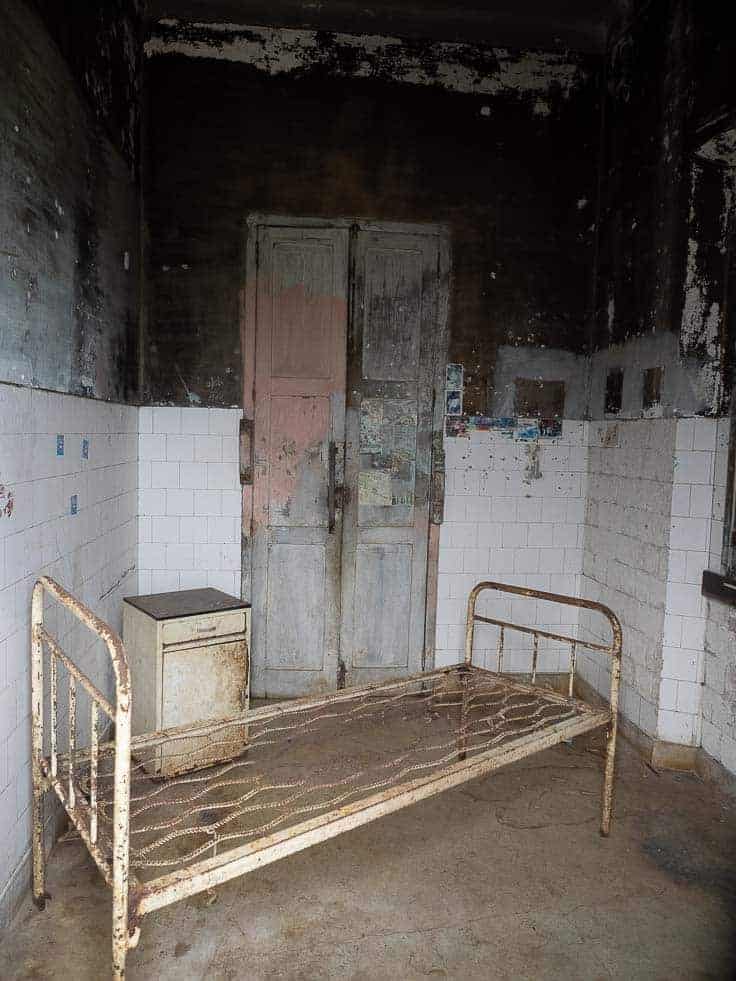 Old bed in the hospital.

Just a few minutes south from Roca Agua Ize is another famous site, the “Boca de Inferno” or better known as the Hell´s Mouth in English. A seaside cliff and a natural wonder according to the locals, the place got its name from the sound that the waves from the ocean that´s constantly pounding the rocks makes.

It´s a good place for a shortstop to enjoy a fresh coconut from the coconut sells men here. 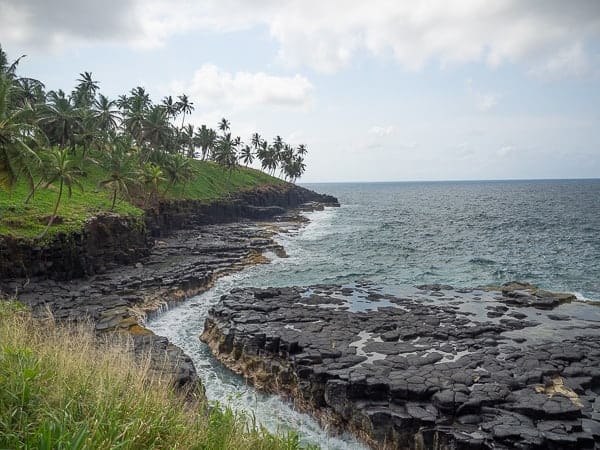 São João dos Angolares town is the biggest town along the south coast with a population of around 2500, the town itself is not much, but it´s home to one of the best if not the best restaurant in the whole country and an old cocoa plantation that now has been turned into an amazing eco-friendly guesthouse on the top of a hill overlooking the ocean.

I myself did not the change to eat here since the restaurant was completely full when I wanted to visit, but everyone I meet bragged about the food here.

Just 15/20 min drive south from São João dos Angolares is the most famous site of Sao Tome & Principe is the Volcanic tower known as Pico Cao Grande 668m (2,192 ft)or “Great Dog Peak” is one of nature’s most impressive high-rise rocks anywhere in the world, this was the main reason I wanted to visit Sao Tome & Principe, is after seeing a picture of this rock. 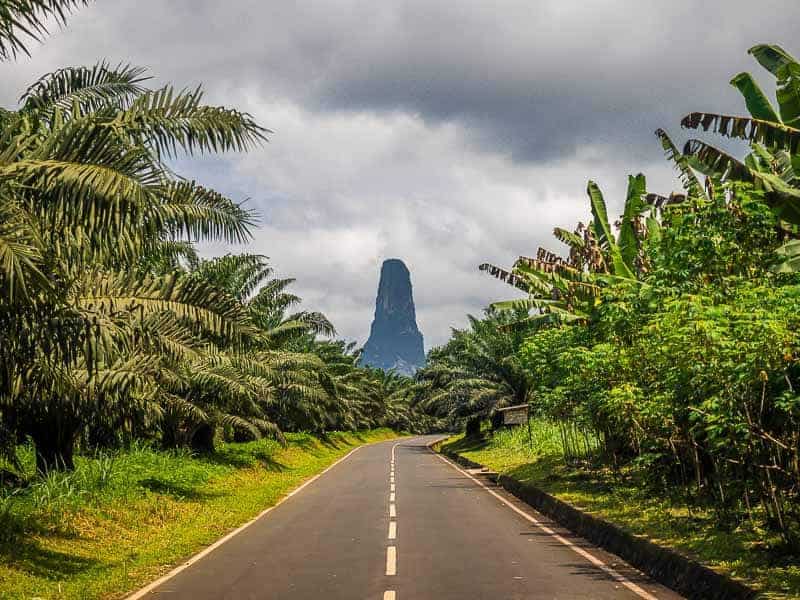 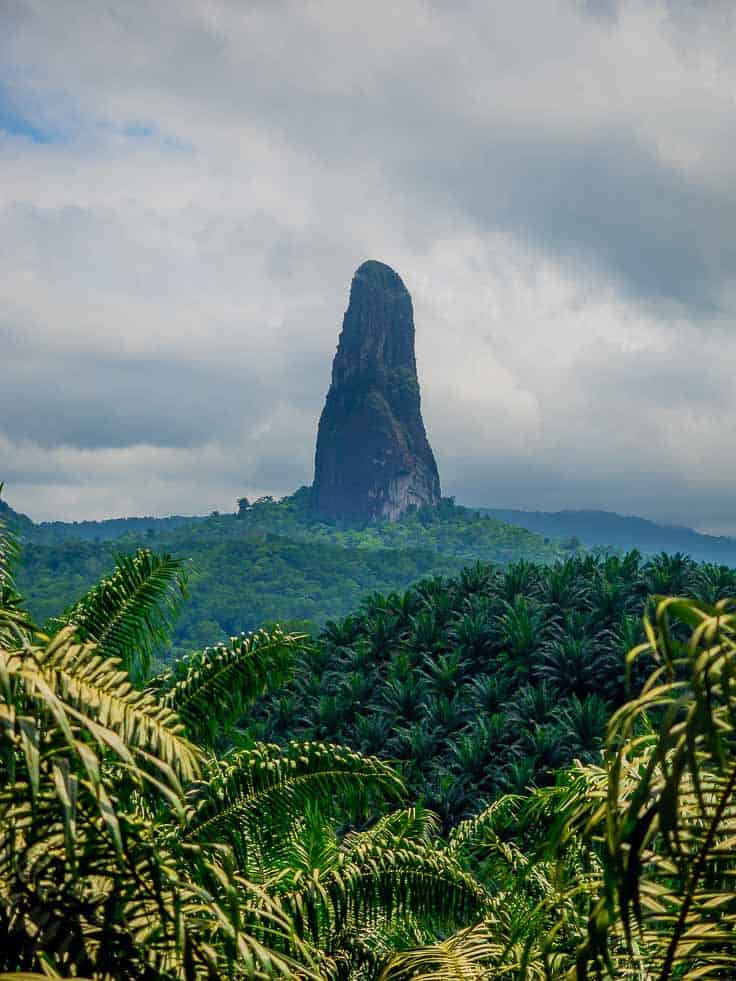 Pico Cão Grande, from one of the viewpoints, if you want to get closer will you have to do a full day hike 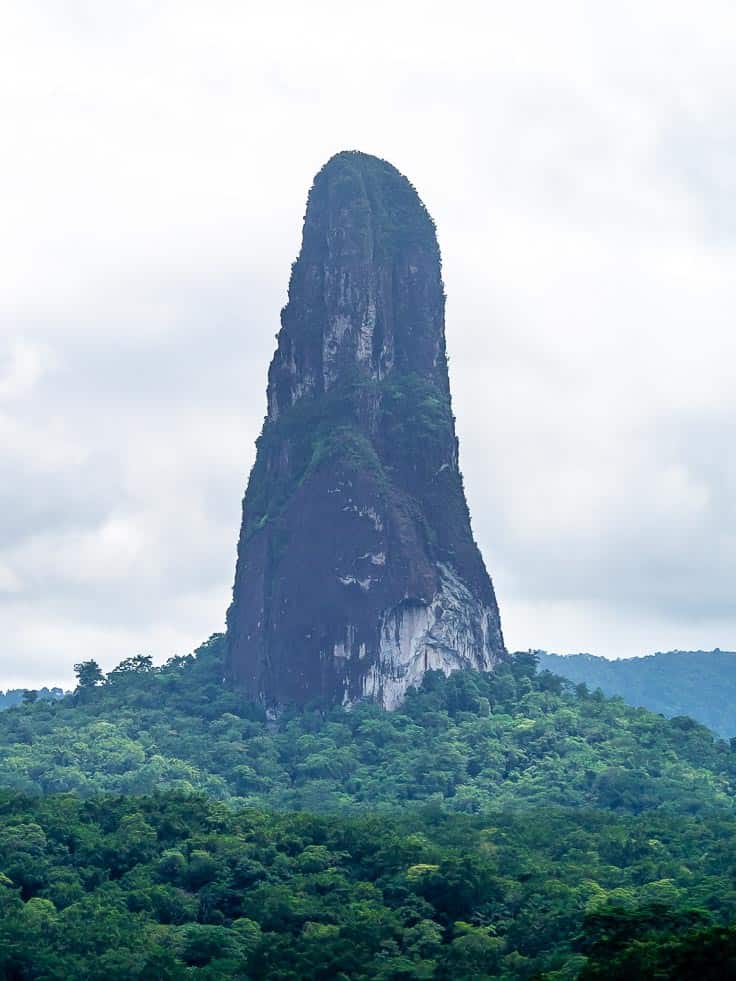 Close up with Pico Cão Grande.

Pico Gao Grande is viewable from the main road, but there are a few better viewpoints along the way.

If you plan in advance is it possible to do a 3km hike through the thick jungle to the base of the Pico Gao Grande. The path is said not bee marked so you are required to hire a local guide in advance.
I got told it would cost you 40Euro for a full day. I would definitely have done this if I knew it.

Pico Gao Grande was first climbed in 1975 by a Portuguese team of climbers, In June 2016, a group of climbers from England, established the first rock climbing route on the peak. The route is considered to bee both extremely long and technically very demanding, the climb is graded 5.13b (F8a) or harder.

A bit further to the south is the waterfall of Cascata De Praia Pesqueria, it´s located 10 min along a dirt road and of the main highway, and a place I would never found without my guide.

This is a great place for a short swim to cool down, and there´s a big chance you will be joined by some young local kids. 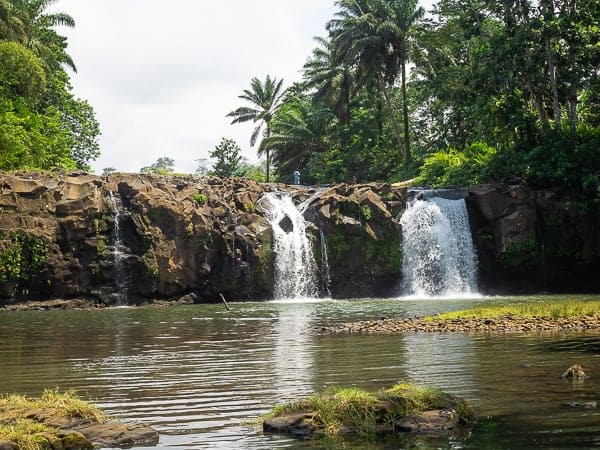 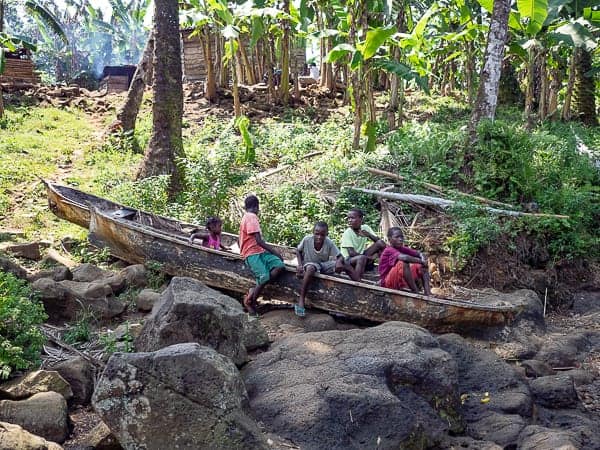 Local kids steering at me while I’m having a swim. 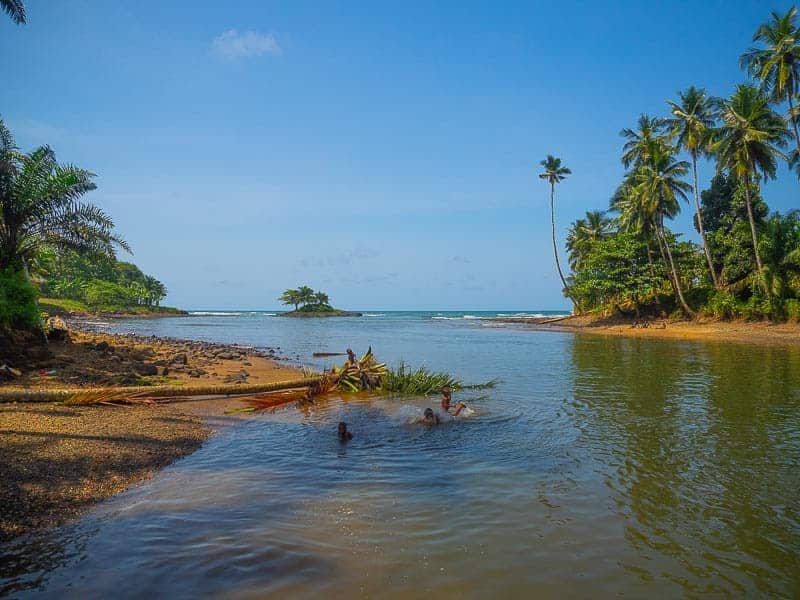 Local kids were swimming just downstream from the waterfall.

A bit further down the coast is the small town of Porto Alegre, it´s the last town on the southern coast on Sao Tome, the town itself got nothing. But there´s an old rusted up tank on the western outskirts of the town.

But Praia Inhame Eco Lodge is located close by, hundreds of turtles lay their eggs on the beach here during the season, but during my visit was there no one around.

If you do have your own vehicle so are Praia Inhame Eco Lodge a great place to stay for the night(no public transportation here), if you’re just passing by is it a great place to have a cold drink and food.

The lodge it´s located almost directly on a beautiful beach. This is also where you can take a small boat over to Rolas Island. 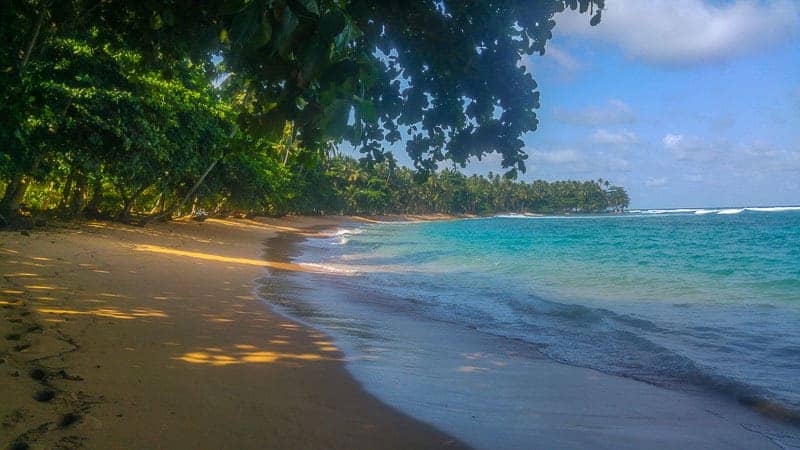 The 20min boat ride across to Rolas Island will cost you 35 Euro for a return trip, the boat it´s small fishing boat, and the ride can be rough if there are waves, we had problems coming back to shore from the waves. Get ready to get wet. 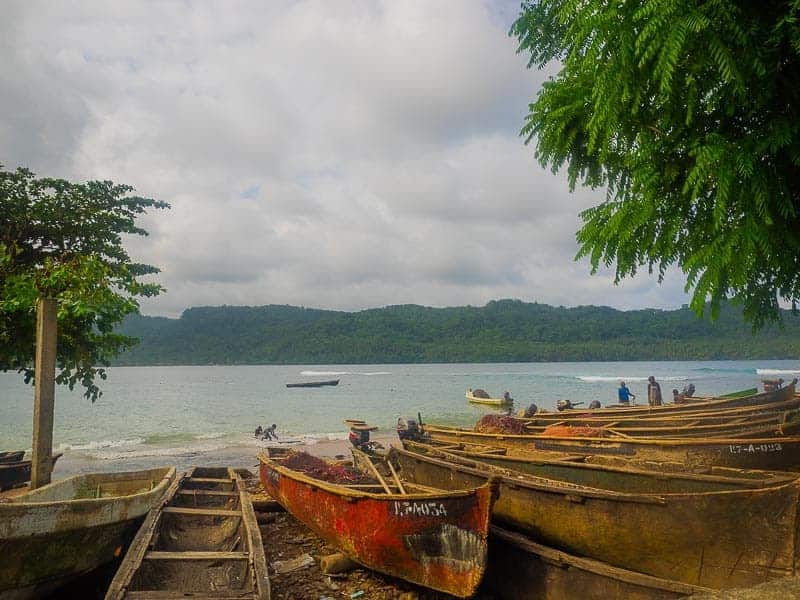 A local boat´s to take you across to Rolas Island.

Rolas Island is where you will cross the Equator; there´s a 20min easy uphill hike to the Equator mark, you will get off your small boat in a small local village. “Fun Fact” the Equator line actually runs through the village at not where the Equator mark is set up.

If you want to stay at Rolas Island is the 4* star resort Pestana Equator, prices start at 230 Euro a night with full board. The resort has a huge swimming pool, bar and a dive centre.

The Equator mark at Rolas island. 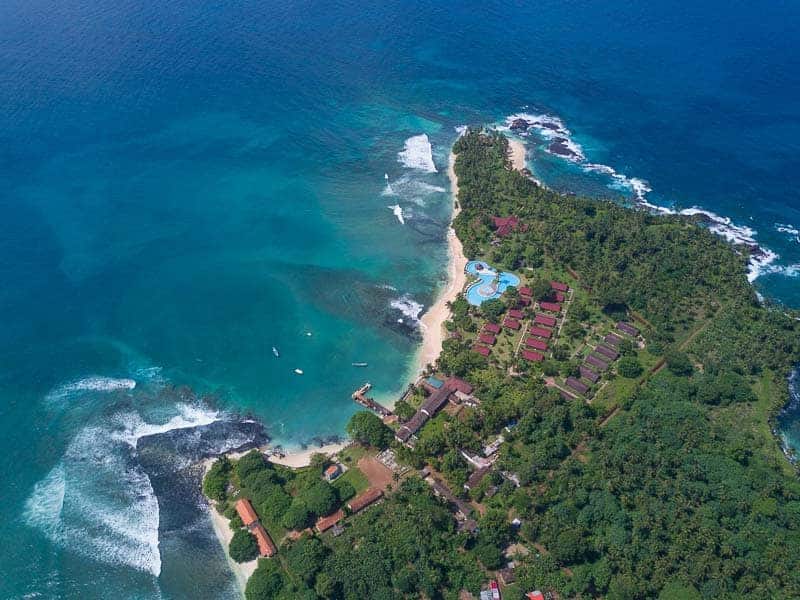 The only hotel located at Rola´s Island. 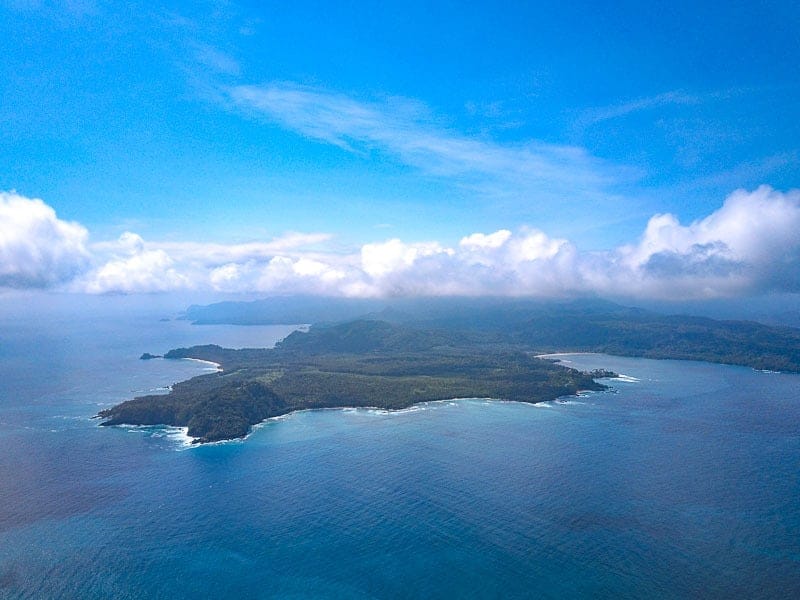 I’m pretty sure I covered all highlights along the Southern Coast of Sao Tome in this post, every site in this post was visited on a long day trip from Sao Tome City, my guide picked me up at 6 am, and I was back at my guesthouse at 7 pm again. 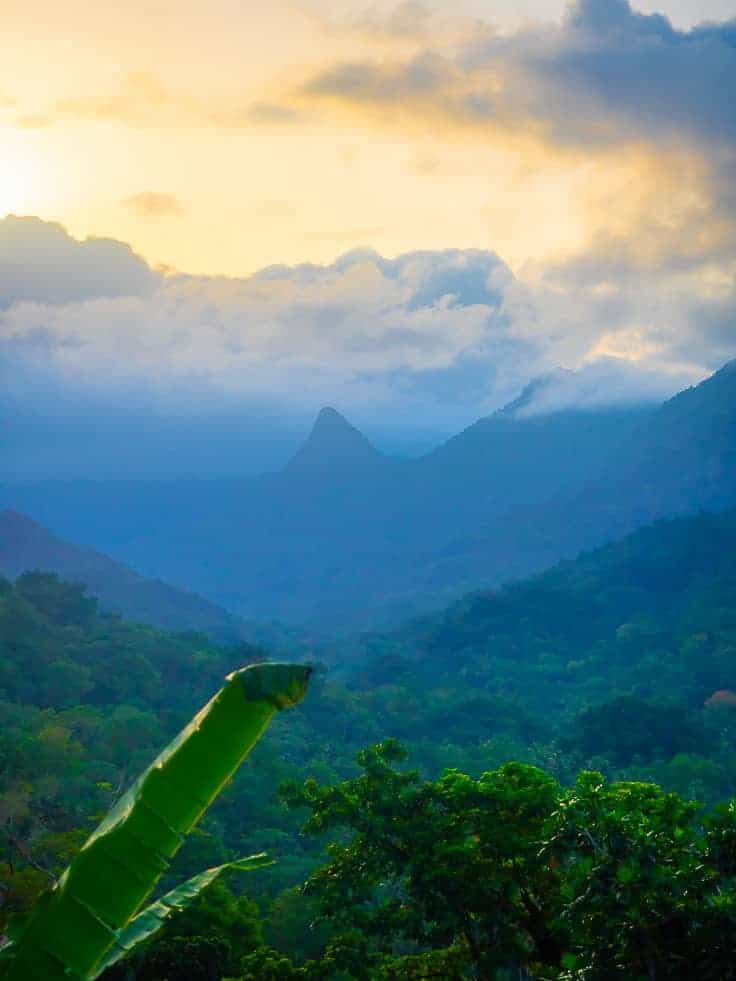 Sunset on the way back home to Sao Tome city.

Guide to Road Trip down the south coast of Sao Tome a tiny country in West Africa, and to cross the Equator at Rolas Island 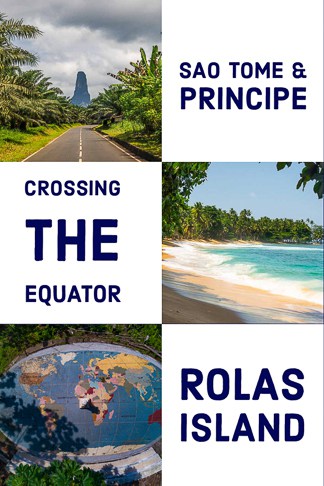