Algiers is the largest city and capital of Algeria. This city is a real gem and one of the world´s most underrated capitals.
With its big French-built boulevards and French-style buildings all around the city centre, the historical and traditional neighbourhood along the hillside, the Casbah of Algiers which offers a spectacular panoramic view over the whole city, and a UNESCO world heritage site, it is quite a destination.

Algiers is a mix between the past and the modern. From the first people being settled here over 1000 years ago, it has now grown into a large city with a metropolitan population of more than 3,5 million. Algiers is also home to only the second metro system in the whole of Africa (the first one is in Cario, Egypt), which makes it a smooth and comfortable way to travel around Algiers.

Panoramic view over Algiers from the top of the Casbah

There´s currently A LOT of construction being carried out around Algiers by Chinese workers, so don’t be surprised if you see a lot of Chinese around the city. A brand new International Airport Terminal, One of the world´s biggest mosque ( With the world´s tallest minaret 265m-high(874 feet) as well as a 20,000 square metres prayer hall capable of accommodating up to 120,000 worshippers, and a one-million book library).

A vast extension to the metro (will connect the airport to the city centre) is only one of the few things that currently being built in Algiers by Chinese workers.

Here´s The Top 10 Thing´s You Shouldn’t Miss When You are In Algiers.

1. Walk Around The Casbah. 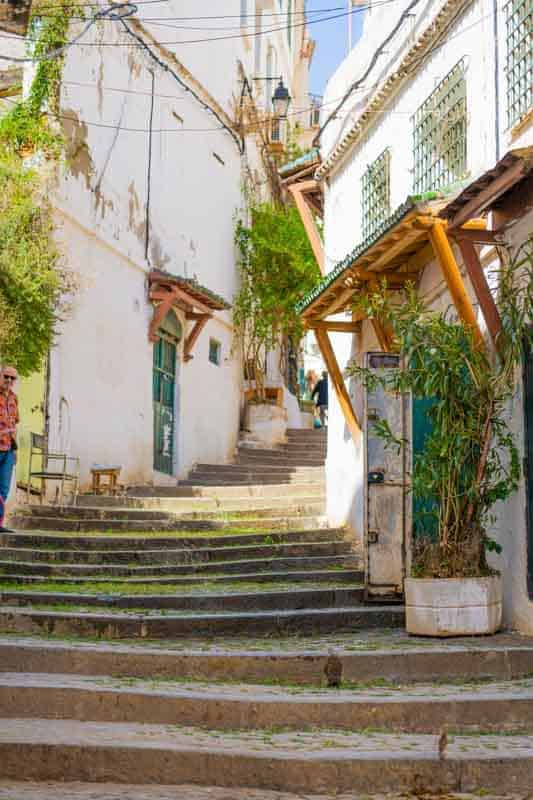 One of many small streets around the Casbah 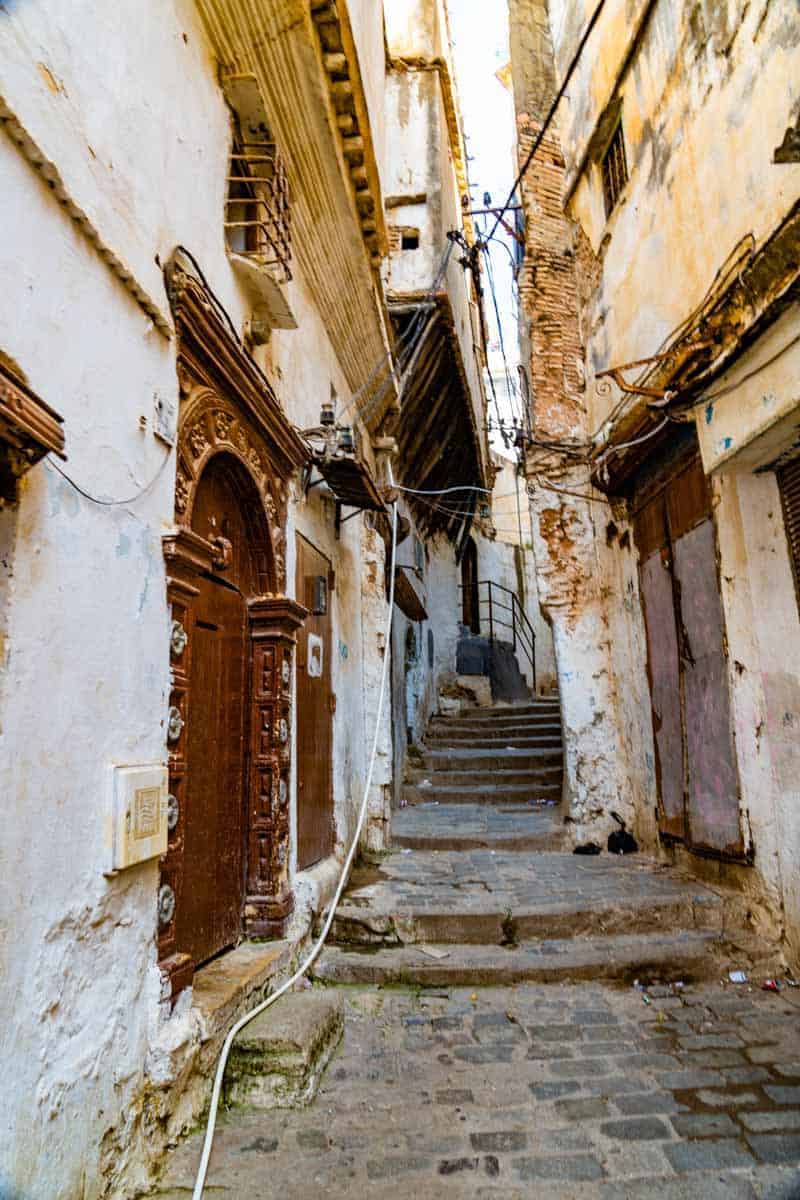 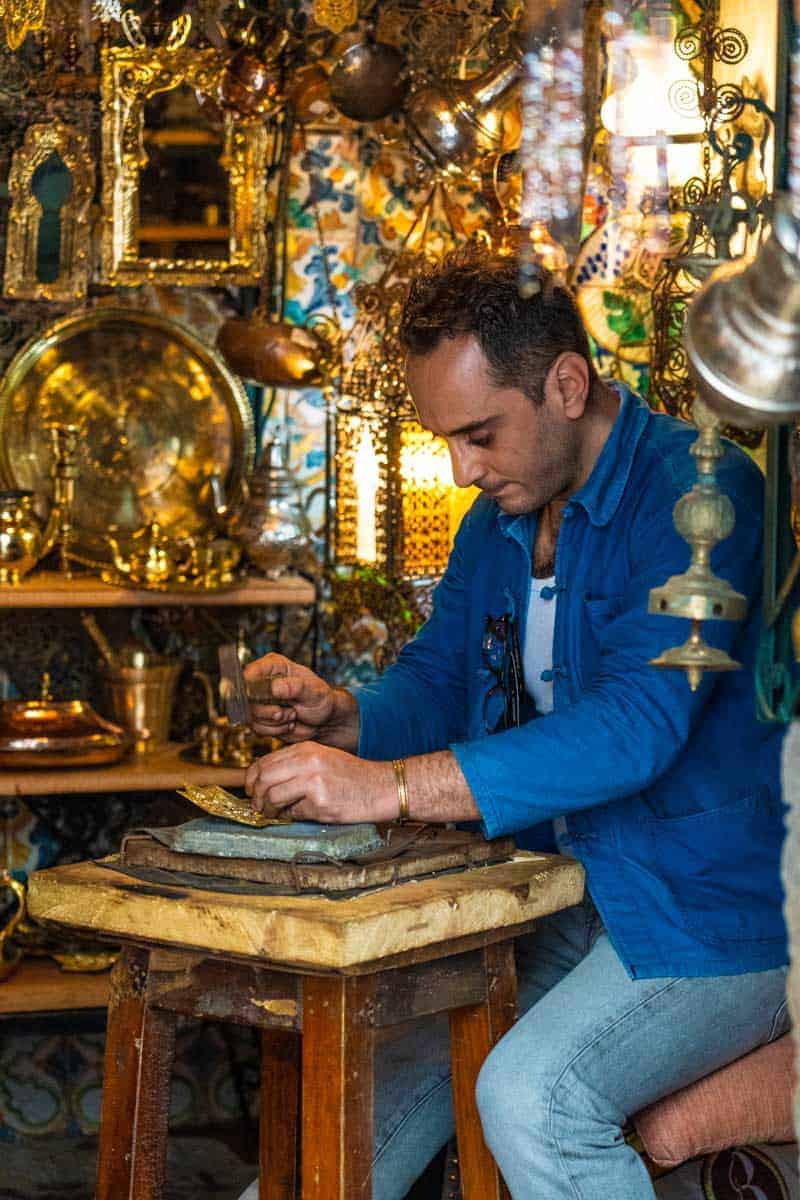 Traditional handicraft in the Casbah 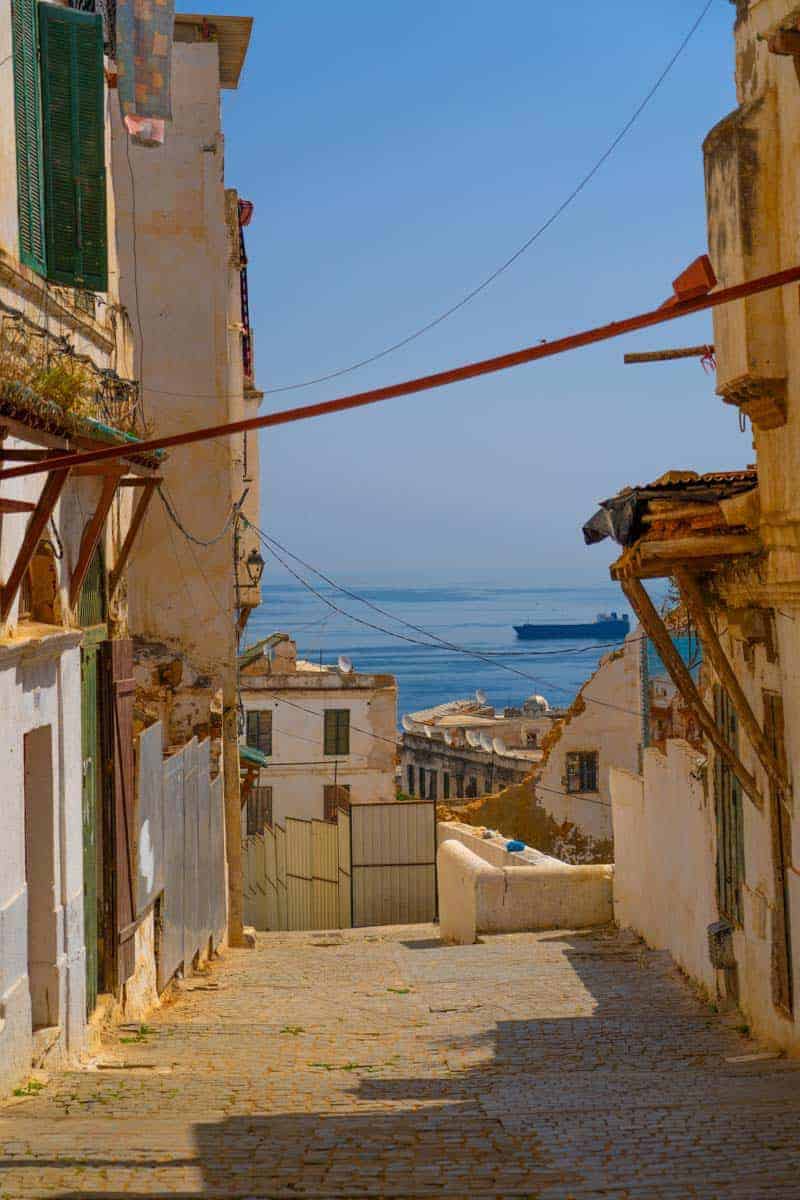 Oceanview from the Casbah

The Casbah of Algiers was once a narrow maze of streets along the hills overlooking the Mediterranean sea built in the 16th to 18th century, protected by a wall surrounding the city. Today it´s the historical and traditional heart of Algiers. Many local artists and handicraft shops are located around here.

I’m, not a fan of hiring guides, but ill highly recommend here, not only not to get lost, but to tell you the history. He will also know which buildings are worth a visit and where you can get the best view over Algiers. The Casbah was added to the Unesco World Heritage List in 1992.

You can spend a full day exploring and getting lost in the back streets here. 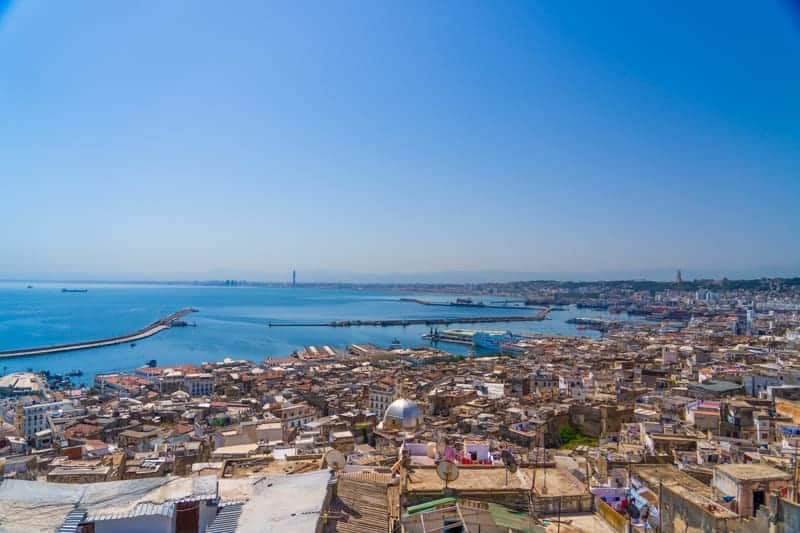 The view from the top of the Casbah. 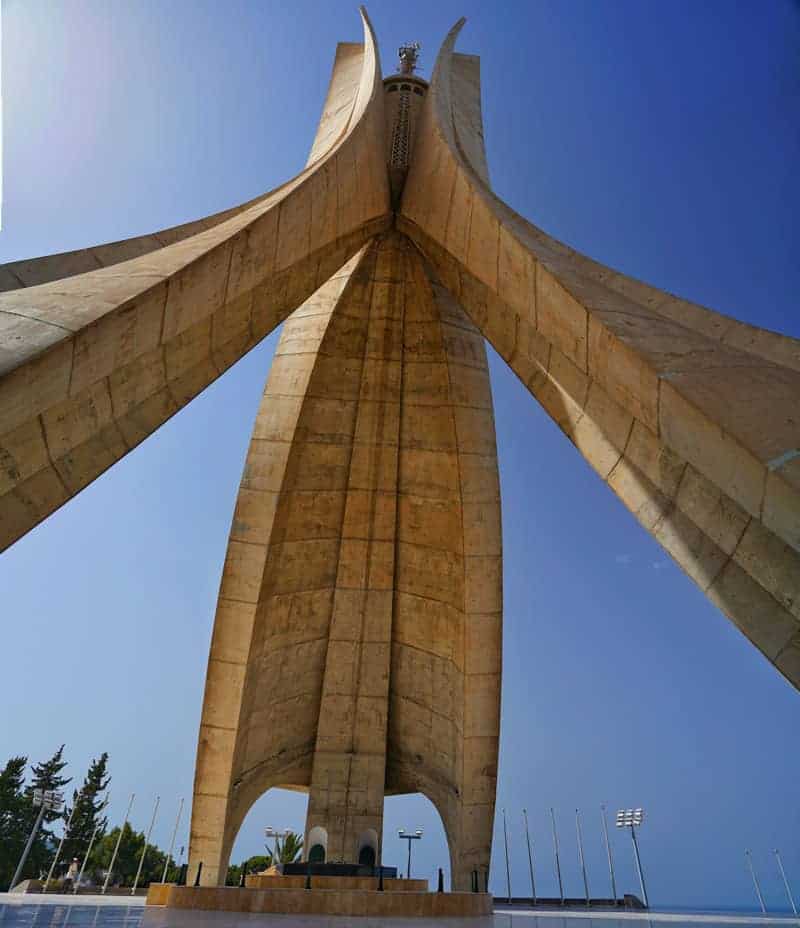 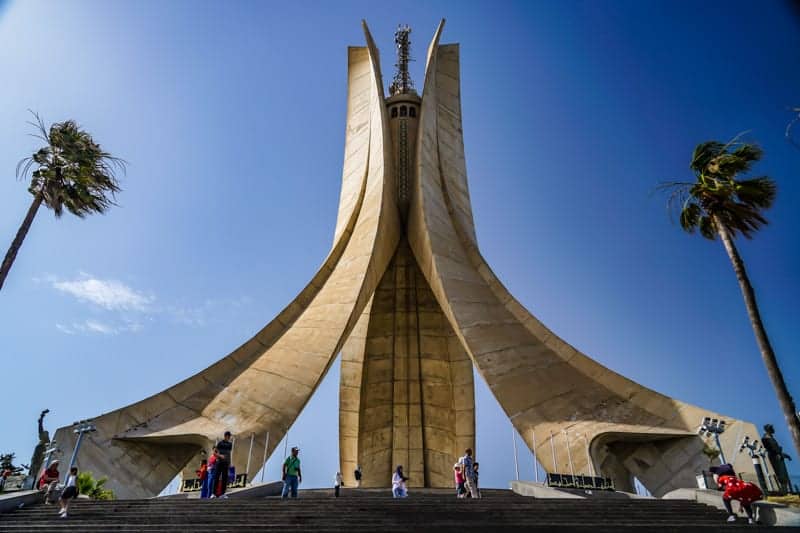 The Martyrs’ Memorial Monument on the hills overlooking Algiers is often considered to be the landmark of Algeria. Built to commemorate the Algerians who were killed in the Algerian war for independence, against the French between 1954 to 1962. A war where almost 1,5 million people lost their life (Algerian historians putting the death toll at 1.5 million Algerian victims while French historians say around 400,000 people from both sides were killed)

Inside the monument is the national museum of the war of Independence which are quite nationalistic and anti-French, it´s easy to understand why. The museum has A LOT of artefacts from the war on display, a part of the exhibition is quite gruesome showing the way the French tortured and killed local freedom fighters.

Unfortunately is the description inside the museum only in French and Arabic. You’re not allowed to take any photos inside the Museum. 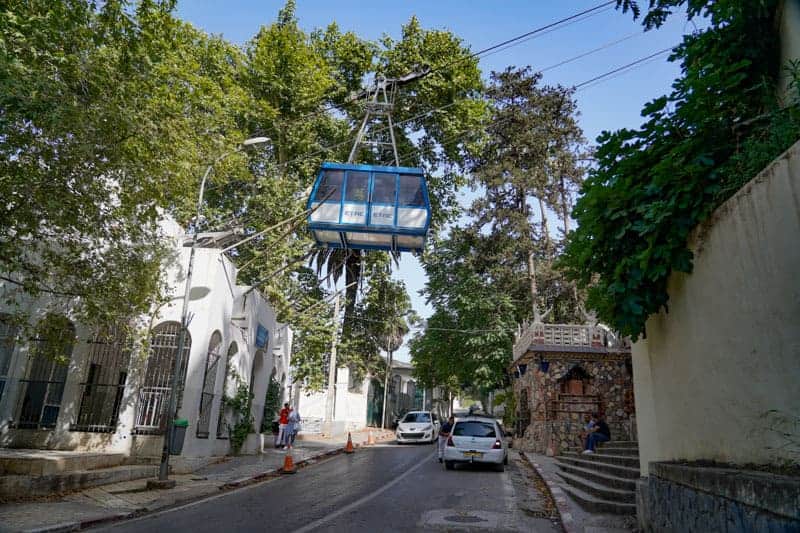 The Cable car that will take you up to the Martyr’s monument.

There´s a cable car between the Martyrs Memorial and a station just above the Botanical Garden. The ride takes less than a minute. 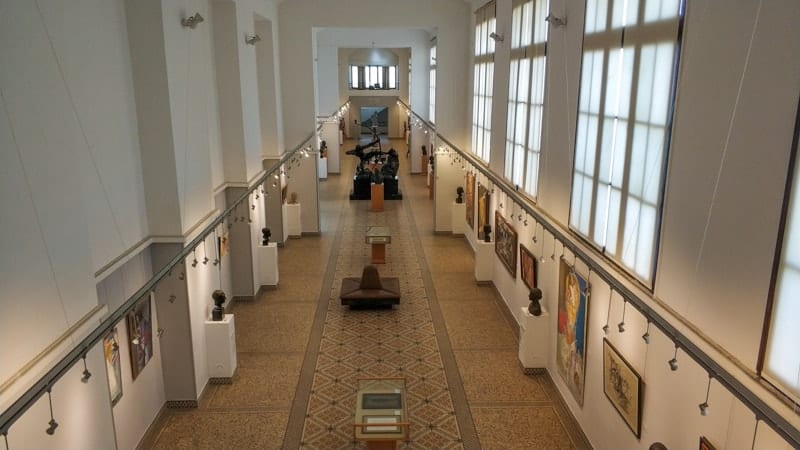 The National Museum of fine art is an obvious stop between the Botanical Garden and Martyr´s Memorial; I’m not a big art fan, so for me, the most impressing thing here is the view from the rooftop balcony. The Museum is over several floors, with the first two floors being filled with statues and sculptures, the top level is filled with older art and paintings.

Once again, if your, not an art fan, it is still worth a visit for the view from the balcony.

The view from the Art Museum

*1962 Only a few weeks after Algeria gained its independence from France, 300 works of art were brought to the Louvre in Paris from the Museum. This shipment included works by Monet, Delacroix, Courbet.

The negotiations over returning the art, and whether it should indeed be returned to Algeria were a contentious issue in France and a cause of outrage in Algeria.

4. Relax In The Botanical Garden. 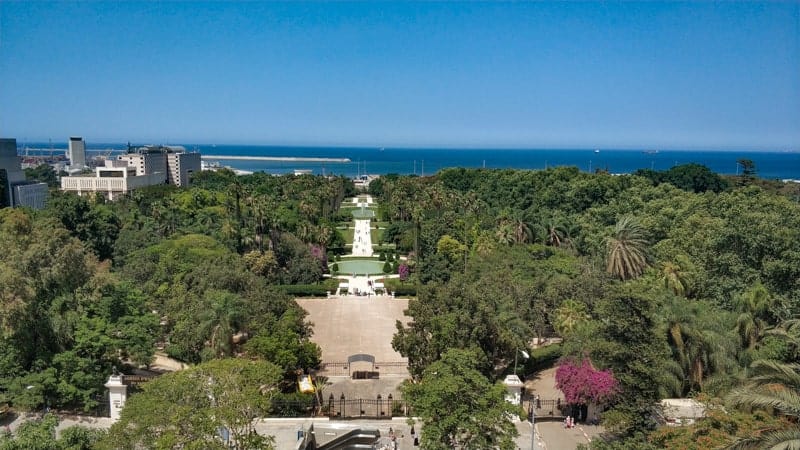 An overview of the Botanical Garden. 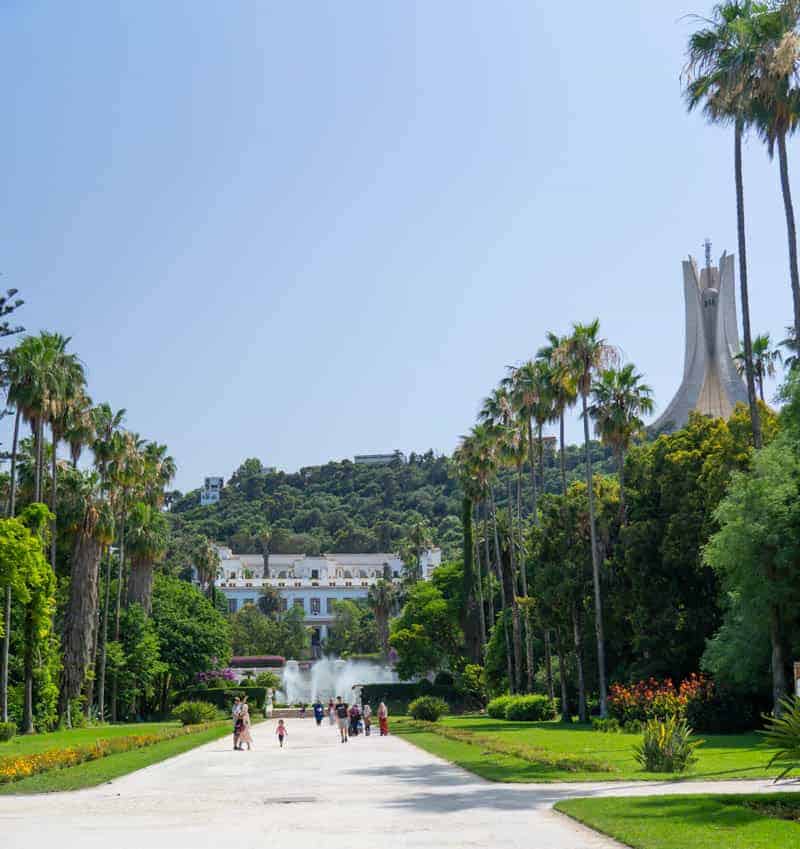 When the sun gets too strong, and you want to relax for a bit the Botanical Garden is a great place to relax, only a few steps from a metro station.

Established in 1832, today the botanical garden covers an area of 58 hectares (140 acres), today it´s home to an estimated 1,200 different species of plants in the garden, there´s also a small cafeteria located here. 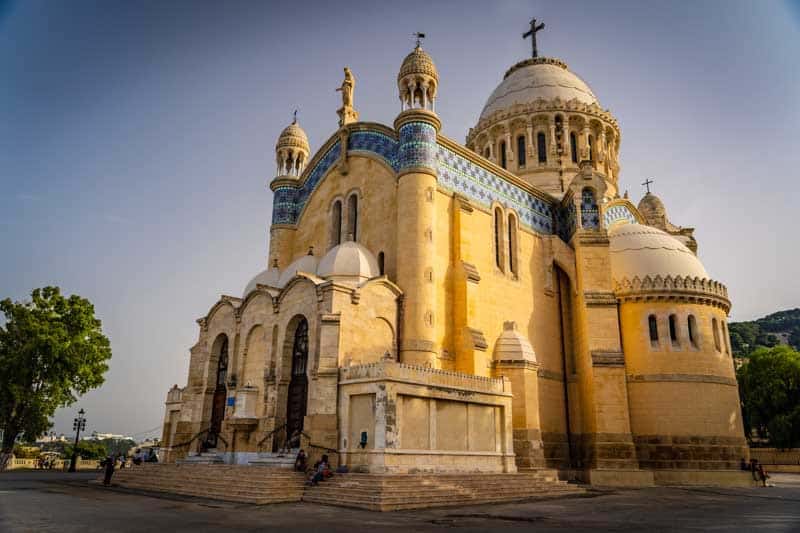 Built back in 1872 Notre Dame d’Afrique is a Roman Catholic Church. It´s one of the most famous landmarks of Algiers. It´s located on a cliff overlooking the Bay Of Algiers, there a great view from here over the Bab El Oued neighbourhood.

It’s a famous landmark and carved behind the altar has the words, “Notre Dame d’Afrique priez pour nous et pour les Musulmans”, meaning “Our Lady of Africa, pray for the Muslims and for us”.

Closest Metro Station: No metro close by, but a taxi should cost no more than 400/500dzd from anywhere in the city centre. 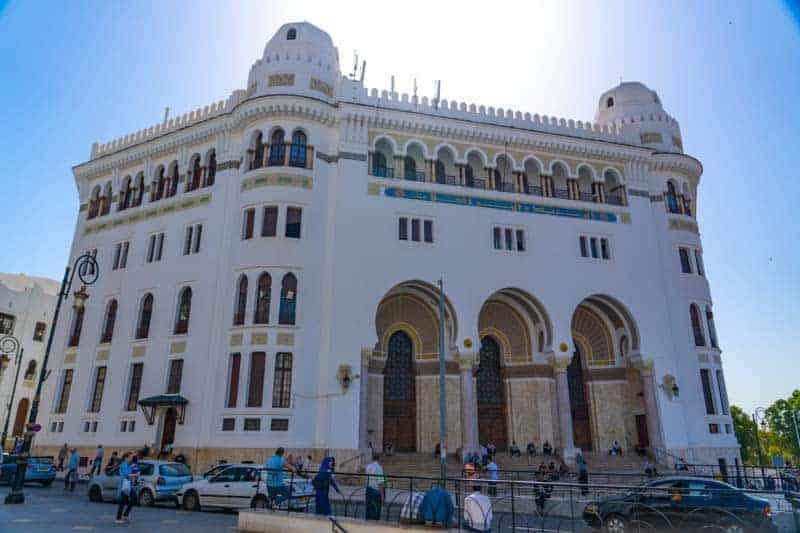 The whole city centre of Algiers will remind you more of being in Europe than in Africa.
One of the best places to admire the French Architecture is along with the Rue Didouche Mourad. The famous Grand Post Office is located here, maybe one of the world´s most impressive post offices.

Surrounding streets are filled with excellent restaurants and coffee shops. 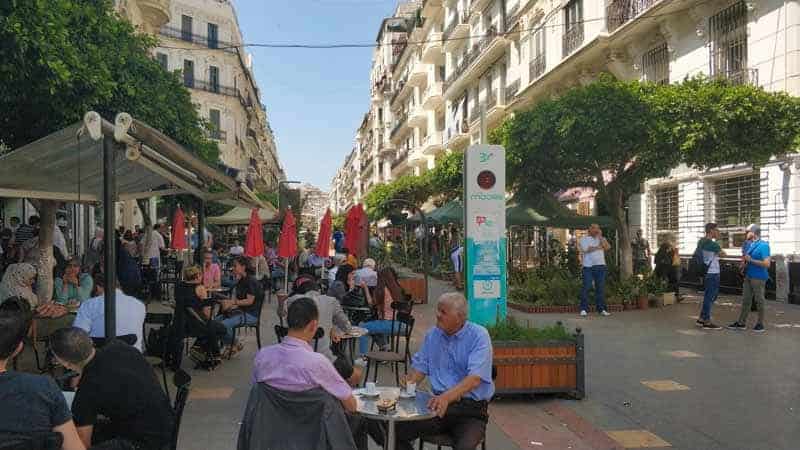 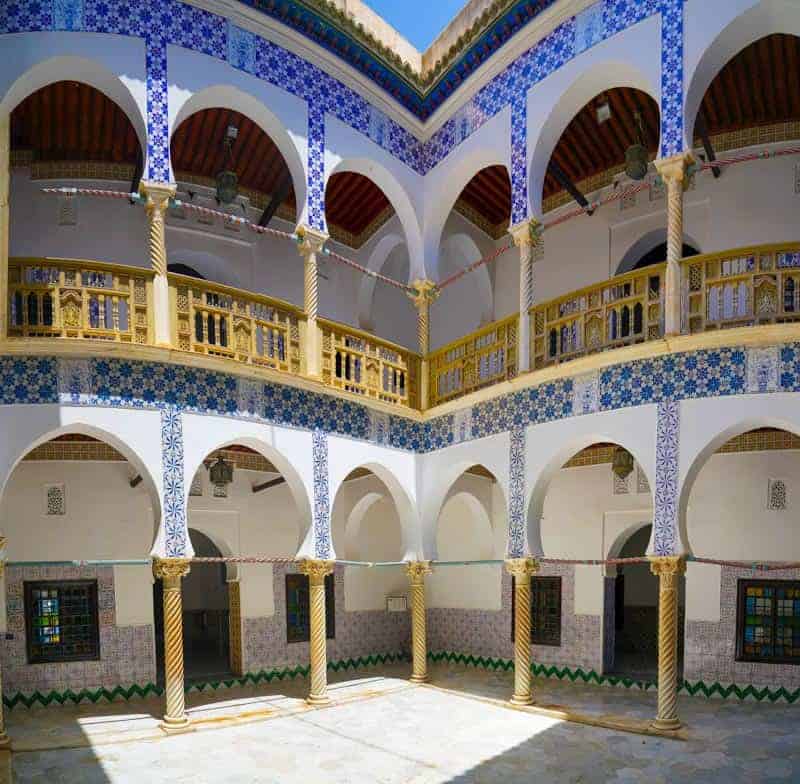 Inside the Palais des Rais.

One of the most historical buildings in Algiers, this is one of the very last surviving parts of the lower Casbah, located right next to the waterfront, The buildings here are three palaces and six houses, whose history goes all the way back to 1750.

It´s also home to the Centre des Arts et de la Culture, which hosts some fine art and photographic exhibitions, during my visit, there was an exhibition on Chinese art!
There´s a small beach behind Palais des Rais if you want to dip your toes in the Mediterranean sea. 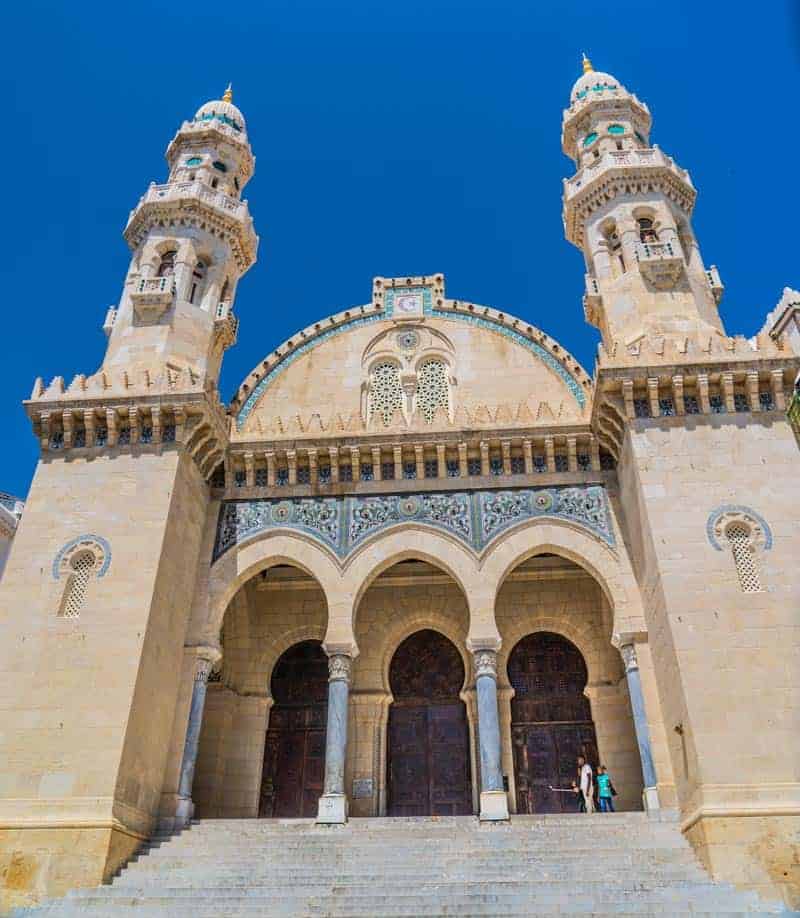 Entrance to The Ketchaoua Mosque.

The Ketchaoua Mosque built-in 1612, The mosque, built during the rule of the Ottoman Empire, before it was turned into the cathedral of St Philippe by the French in 1845, then back into a Mosque when Algeria got it independence in 1962

The Mosque was once at the centre of the city. Its strategic location, standing on the first of the Casbah’s stairways. It´s today one of the best-preserved historical buildings in all of Algiers.

9. Walk The Boulevard Along The Waterfront. 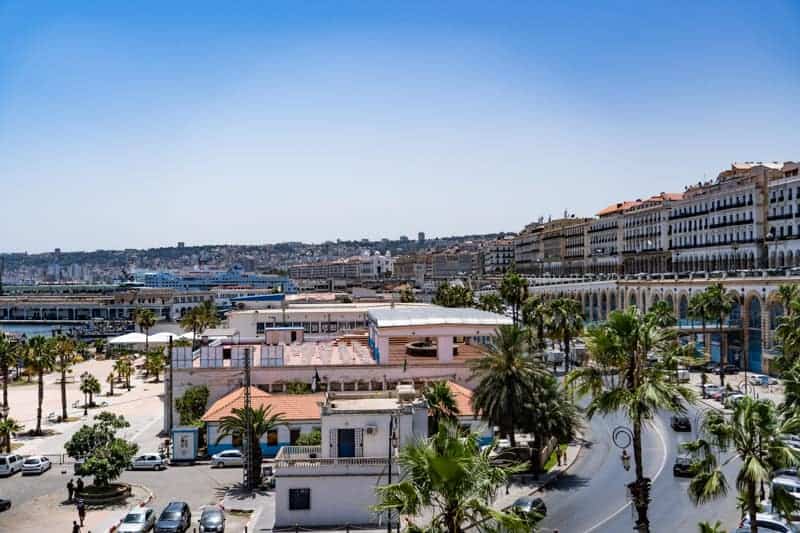 It´s a lovely walk along the waterfront.

The waterfront in Algiers is a pleasant walk along the wide sidewalks, full of French Arctithucthre buildings. It´s a perfect place for an early evening walk to watch the sunset and get a fresh breeze from the Mediterranean sea.

Algeria is a Muslim country, so you can not find beer or alcohol in a lot of places, it´s actually pretty hidden, so ask your hotel, they should know a local bar. The local bars are kinda strange, hidden behind thick metal doors with no signs. You will have to ring the doorbell to the guard to open the door. 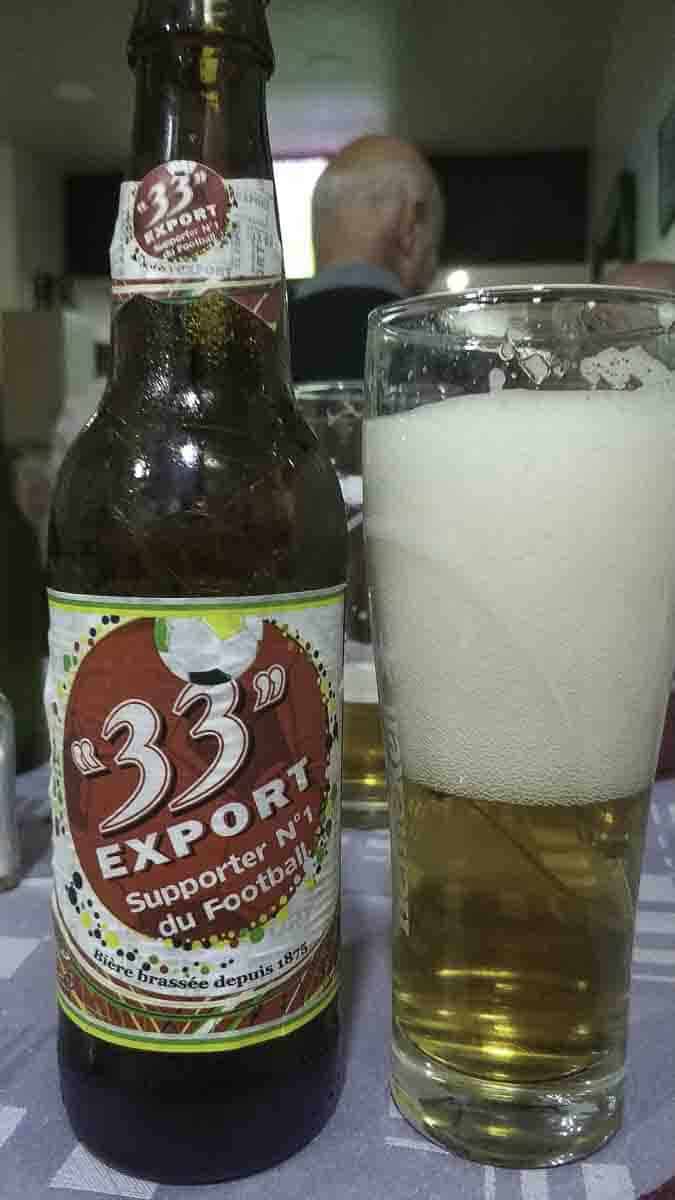 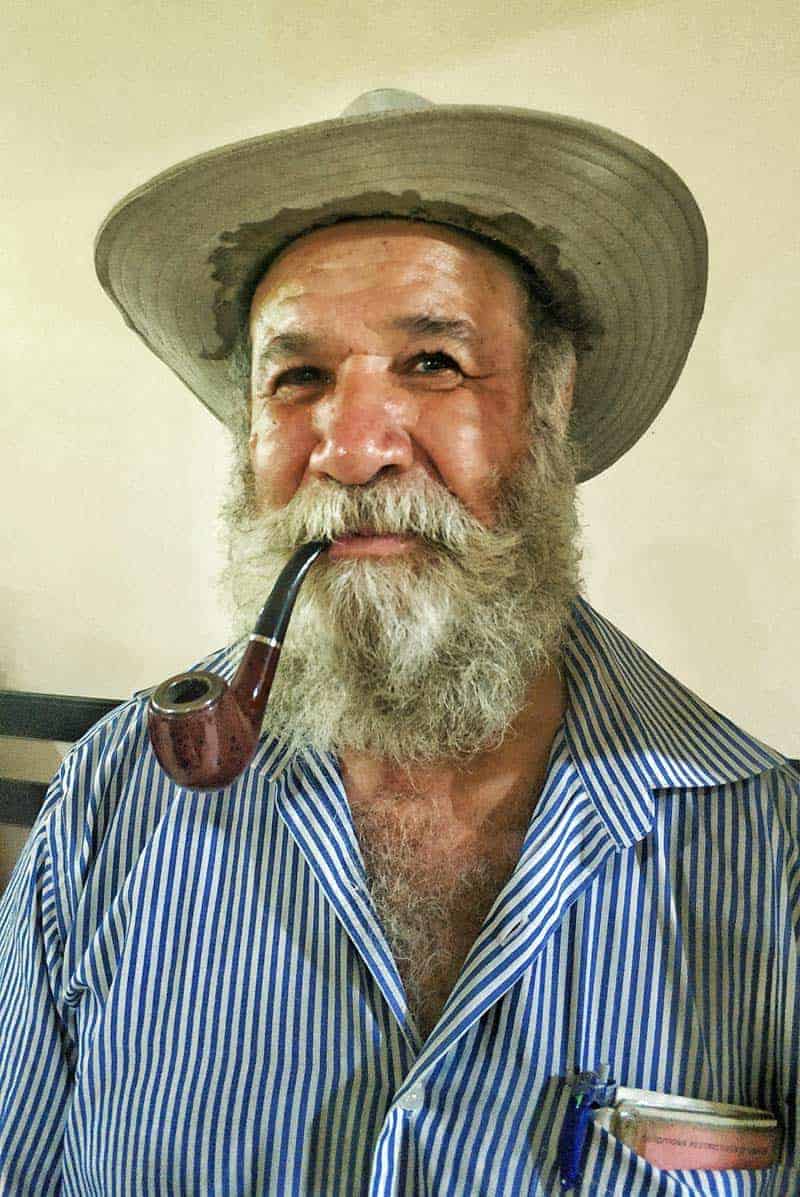 When you get inside will you be met by the highest density of smokers I have ever experienced, but what a friendly crowd! Everyone was so happy to see a foreign tourist. Everyone, even the owners came over to greet me welcome and to share a bottle of wine and beer, not much English was spoken, but still enough to discuss the Football World Cup that was going on during my visit.

An easy day trip to undertake from Algiers is to the Roman Ruins of Tipasa, A Unesco World Heritage Site. 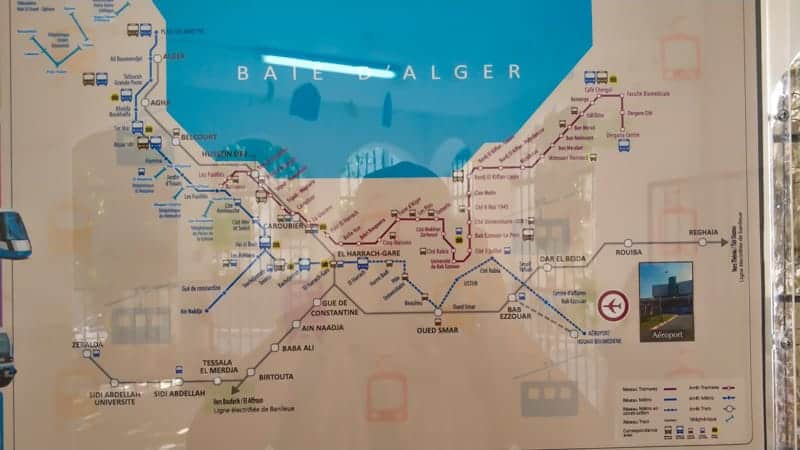 A taxi from the Airport to the city centre cost 1000 – 1500 DZD.
Getting around Algiers is super easy using the metro or tram system. It´s only one metro line with 19 stations; there are no interchange stations. The metro line is currently being extended all the way to the Airport with another ten stations.

If you can´t reach your destination by Metro, taxi is an easy option, the price should be no more than 400/500D DZD to anywhere around the city centre, and surprisingly all four cabs I used in Algiers spoke English.

Algiers is a super safe city, you will see a lot of police around Algiers and Algeria, but they are all friendly and will never bother you.
You will see a local woman wearing the same cloth style as Europe, some in jeans, t-shirt, tank tops, dresses, hijab etc.
I felt 100% safety all the time in Algiers.

During my visit to Algiers, I stayed at Hotel ABC, a centrally located hotel, only 2 minutes walk from the main street, friendly English speaking staff, clean, decent size room with good shower and Wifi.

There´s currently no backpacker hostels or guesthouse in Algiers or Algeria, so basic hotels or AirBNB is your best option if you are on a tight budget.

I really liked Algiers, it was a friendly and pleasant city to walk around, there were enough excellent local restaurants (many selling top French Cuisine) and coffee shops, the locals were super friendly and welcoming.
I genuinely believe that if Algiers would have been located across the Mediterranean sea in Spain or French, so would Algiers have been on a level with Barcelona or Marseille etc. when it comes to tourism, there are enough sites around the city, a lot of easy day trips to UNESCO worlds heritage sites like the Roman Ruins at Tipaza or Djemila to keep visitors busy here. 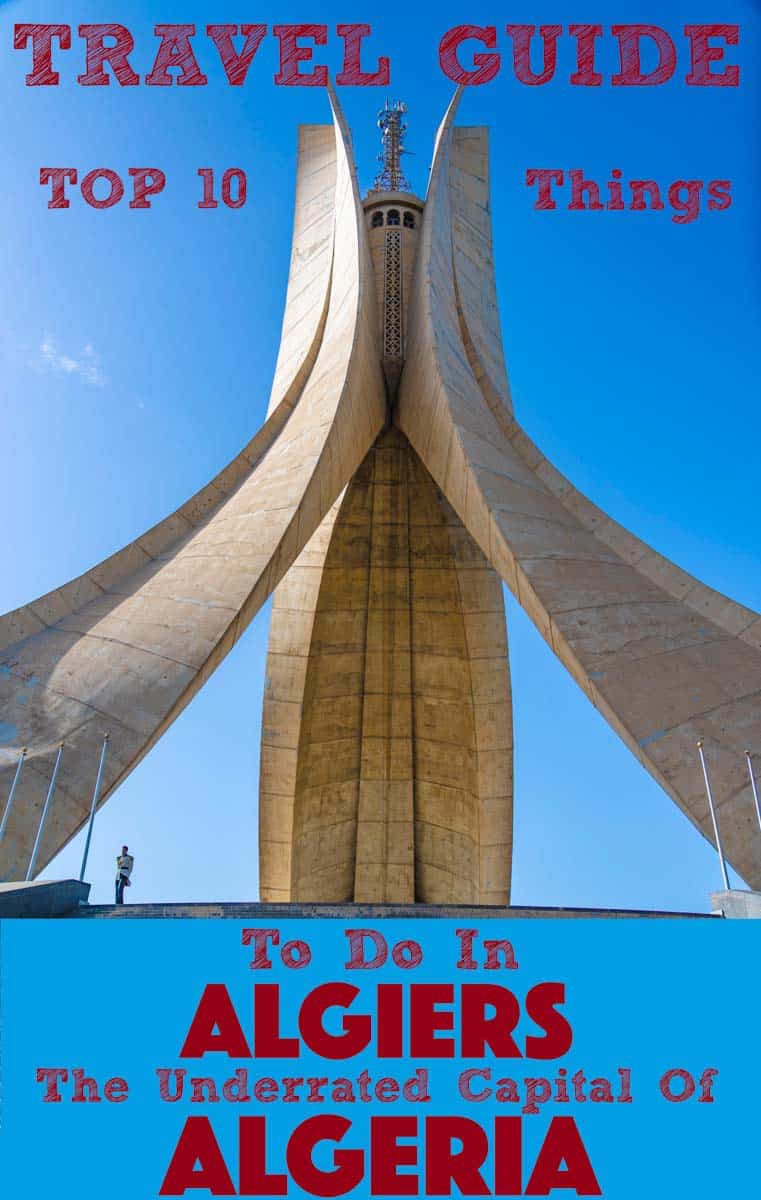 Algiers is the largest city and capital of Algeria. This city is a real gem and one of the world´s most underrated capitals. Here´s your complete guide to this fantastic city in northern Africa 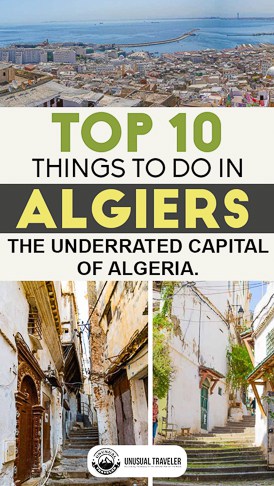 Top Things to do in Algiers the capital of Algeria