No other place in the world has a more historical sound to its name as the ancient city of Babylon in Iraq.

After years of colonial looting coupled with the crazy dreams of Saddam Hussein, along with massive American destruction during the Iraq 2003 invasion, the legendary city of Babylon has almost vanished.

There´s not much left these days, but old relics are laying all over the area, unprotected. 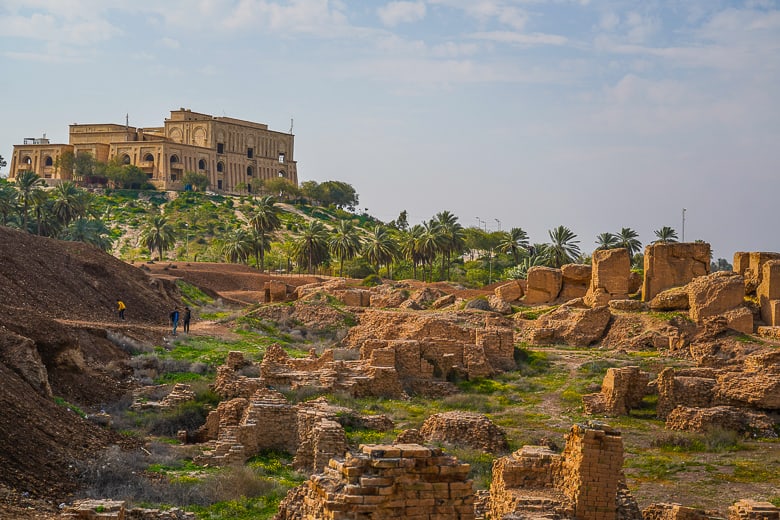 Of all the world’s ancient cities, none can compete with the legendary ancient city of Babylon.

This site is where one of the seven original seven wonders of the ancient world once is believed stood. It was known as “the hanging gardens of Babylon” and home to the Tower of Babylon/Babel.

It was one of the most important kingdoms that the world has ever seen, and the place where Alexander The Great passed away aged 32 years old. 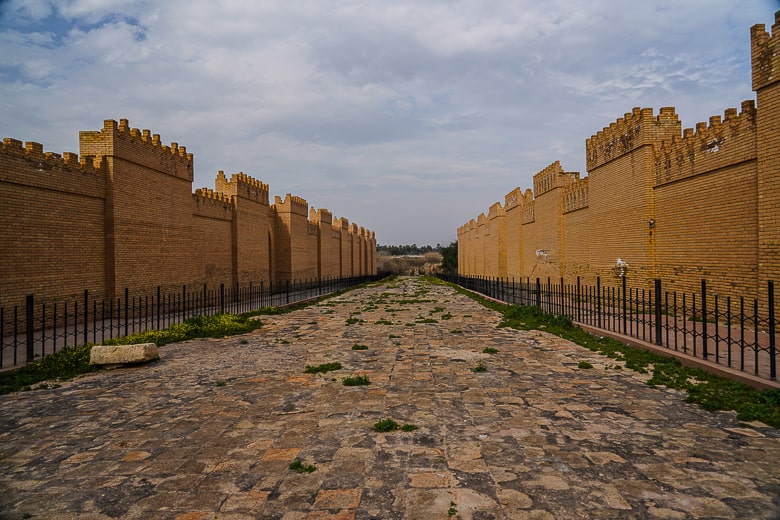 The original walkway behind the fence, the rebuilt ruins on the sides

These days Babylon is probably best known in among the young people in the west as a common name for a pizza restaurant or for kebabs and shawarmas. So much for history and education these days in the west.

Where is Babylon located today?

The ancient ruins of Babylon are located in the southern part of Iraq, around 57km/35miles south of Baghdad, along the Euphrates river and 49km east of Karbala.

The closest city to Babylon is the city of Hillah, the capital of the province, Hillah itself was once a major centre of Islamic scholarship and education.

The Jewish prophet Ezekiel tomb located just outside Hillah, the tomb is the oldest and most important Jewish religious site in all of Iraq. The tomb was put under the protection of Saddam Hussein.

Babylon was established during 19th century BC in the historical region of Mesopotamian.

Which means “The Land Between Two Rivers”. The two rivers being the Tigris and the Euphrates river. 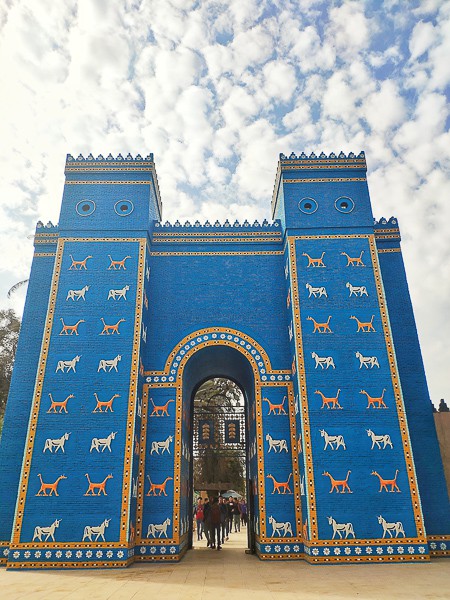 The replica of the famous Ishtar gate which is located in Berlin.

The history of Babylon goes back almost 4000 years. Starting from the Bronze Age when the area was occupied by tribes known as the Amorites.

The ancient city then developed into a minor city-state, but it was not before under the sixth king Hammurabi 1792 BC to 1750BC.

King Hammurabi most famous for making the world´s first written law “the code of Hammurabi” the original tablets are now on display in the Louvre Museum in Paris. 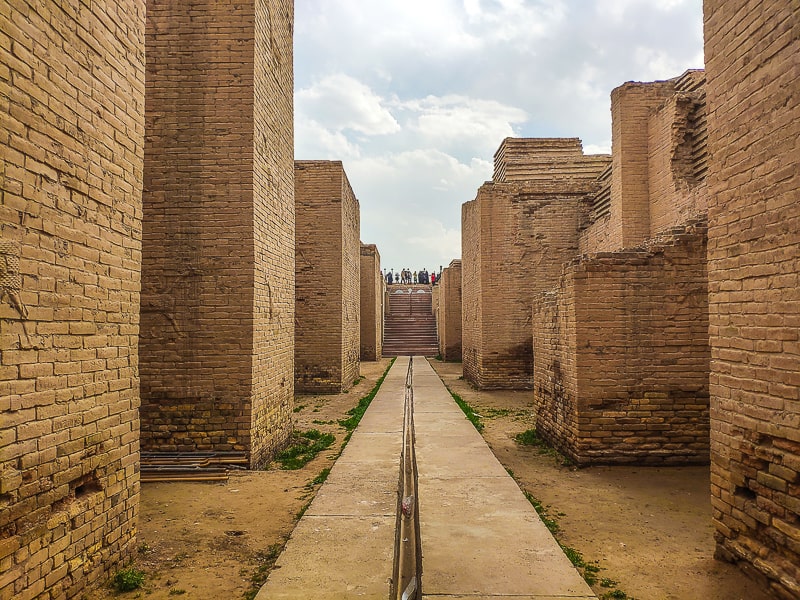 Original walkways in the city, this is where the Ishtar Gate, which is located in Berlin once stood. 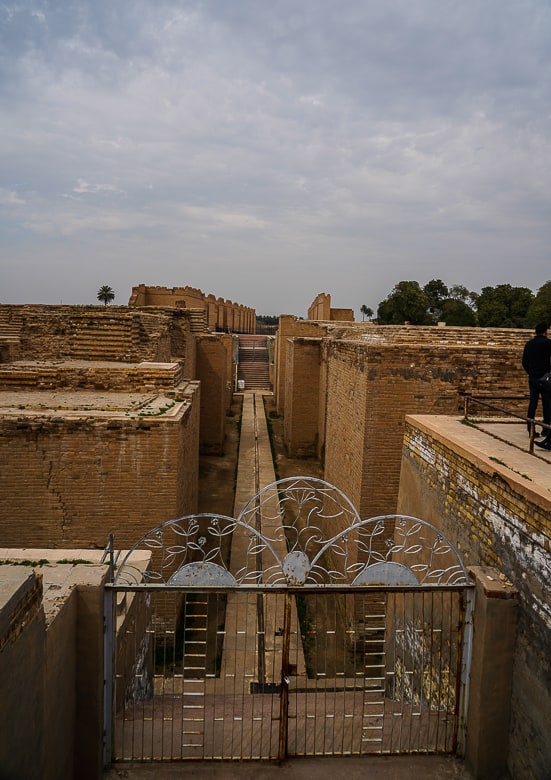 Original walkways around the place, this is where the Ishtar Gate, which is located in Berlin once stood. 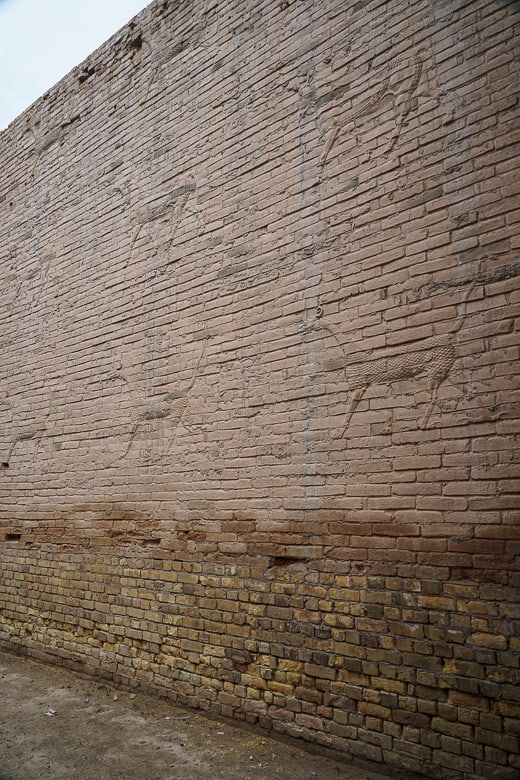 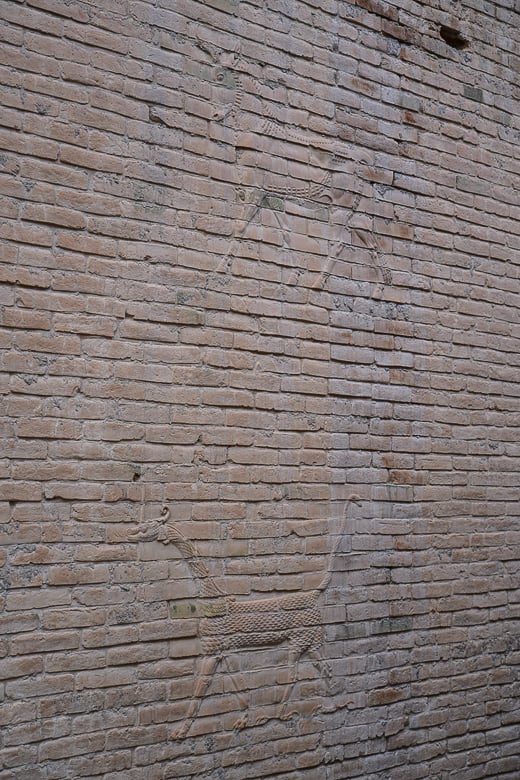 King Hammurabi also conquered all of the cities including the famous city of “Ur” and all other city-states in the southern Mesopotamia. He combined them into one kingdom and ruled from Babylon.

The group of cities was known as Babylonia.

After the death of King Hammurabi in the year 1750BC, the power over the city regularly changed hands between different tribes and empires before the Assyrians took power over the land in 1000BC. 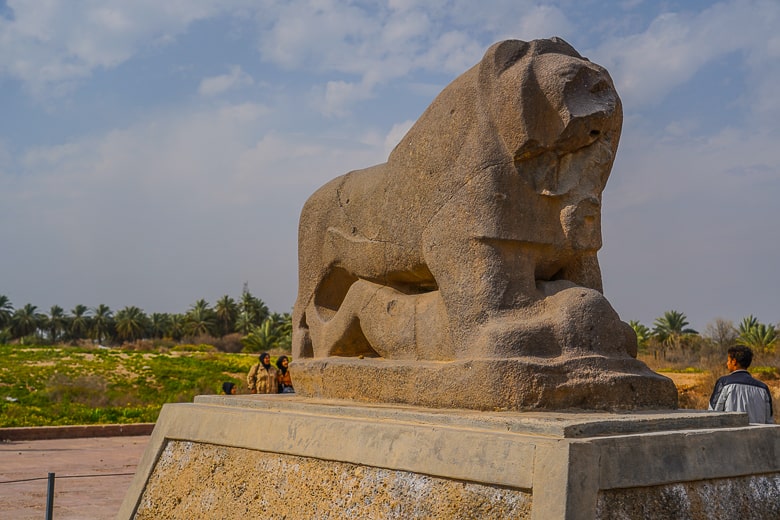 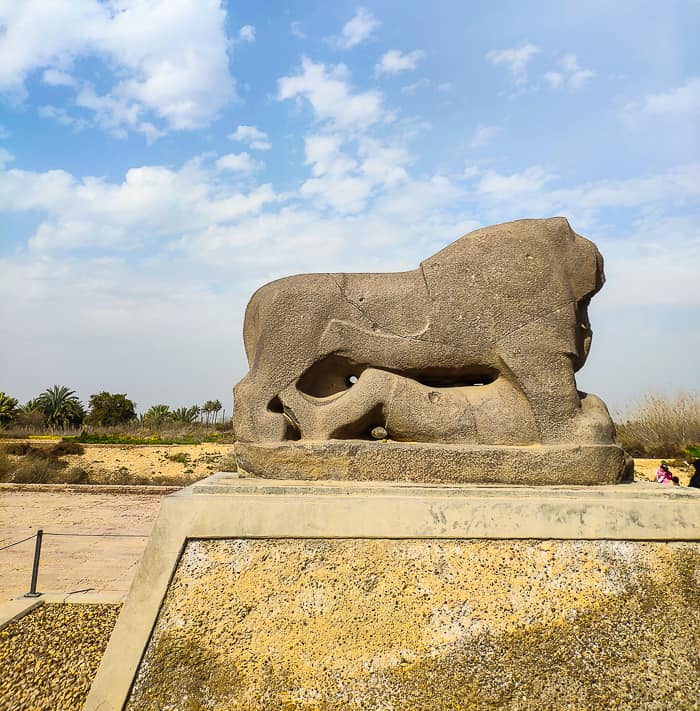 This lasted until the death of the Assyrian king Ashurbanipal in 627BC. This resulted in political instability that resulted in a series of brutal civil wars which Babylonia rebelled under Nabopolassar.

Nabopolassar created The Neo-Babylonian Empire (also known as the Chaldean Empire) in 626BC. It was considered to be the Golden Age of the place.

But it was under his son Nebuchadnezzar that Babylon rose to its full glory and became the world´s largest city in at that time with what is believed to have been a population of 200 000.

The rebuilt wall on top of the old ruins. 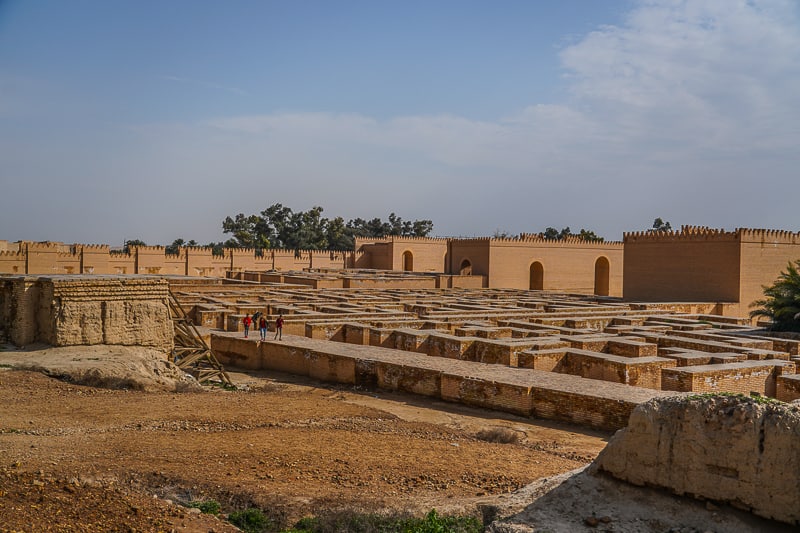 Ruins and the rebuilt part of this historical place.

Nebuchadnezzar is also believed to have ordered the building of the Hanging Gardens of Babylon one of the Seven Wonders of the Ancient World.

Many historians believe that the Hanging Gardens were actually located in the Assyrian capital of Nineveh. 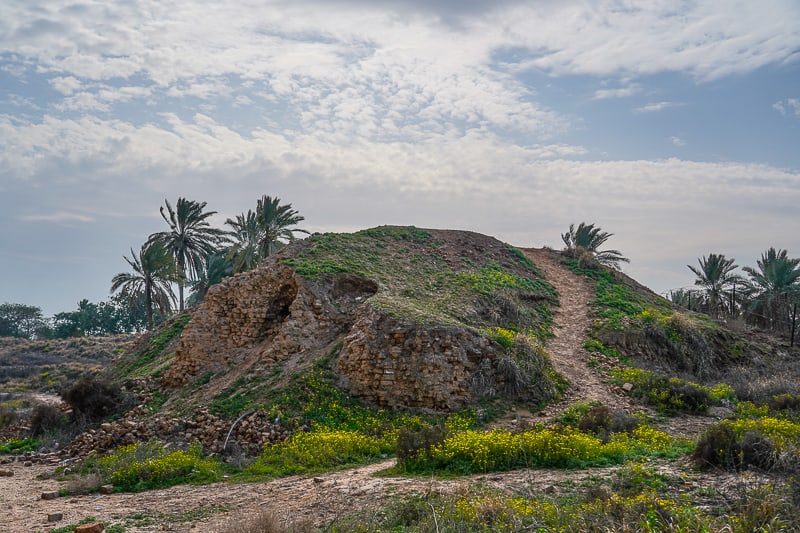 Where my guide believed the hanging garden of Babylon once stood.

The work of Nebuchadnezzar’s Babylon is spread over two thousand acres. It formed the most significant archaeological site in the Middle East.

Only about 5% of Babylon is believed to have been excavated by archaeologists.

Nebuchadnezzar was considered to be a very successful military leader after his campaigns in Syria and Arabia.

His takeover of Jerusalem 589BC where he was in charge of the destruction of Solomon’s Temple, also known as the First Temple was a stand out point. 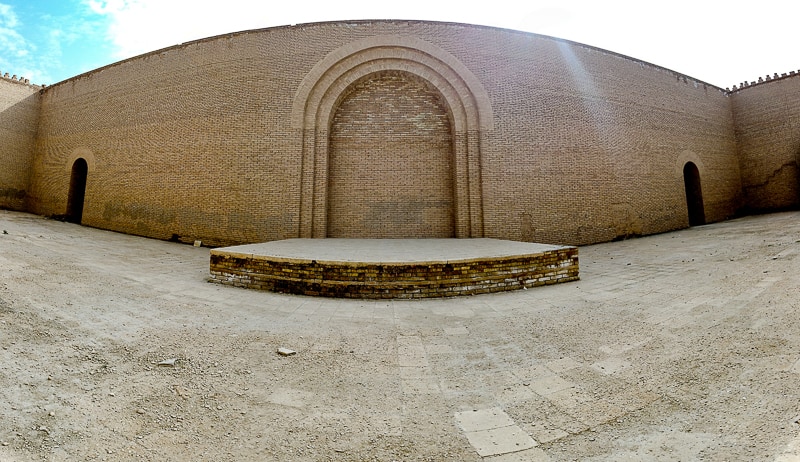 The rebuilt throne room of Nebuchadnezzar and where Alexander the Great is believed to have died.

Rebuilt and original parts of the historical place 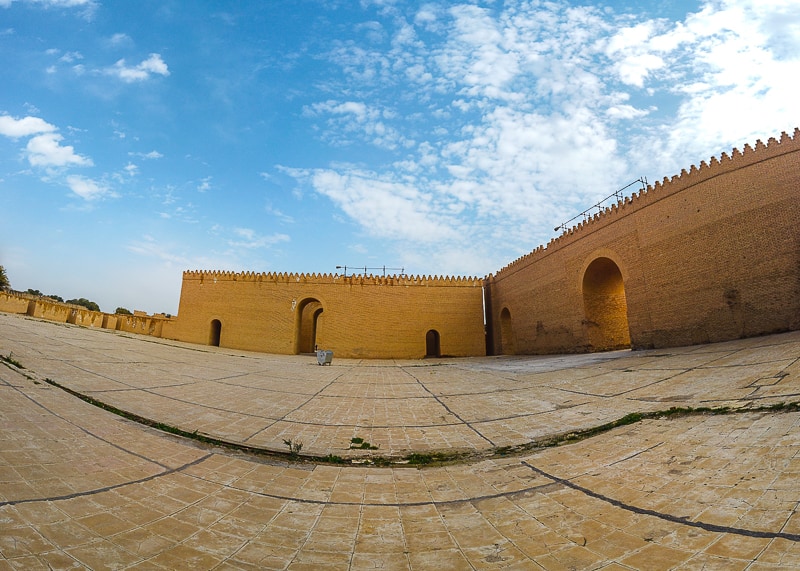 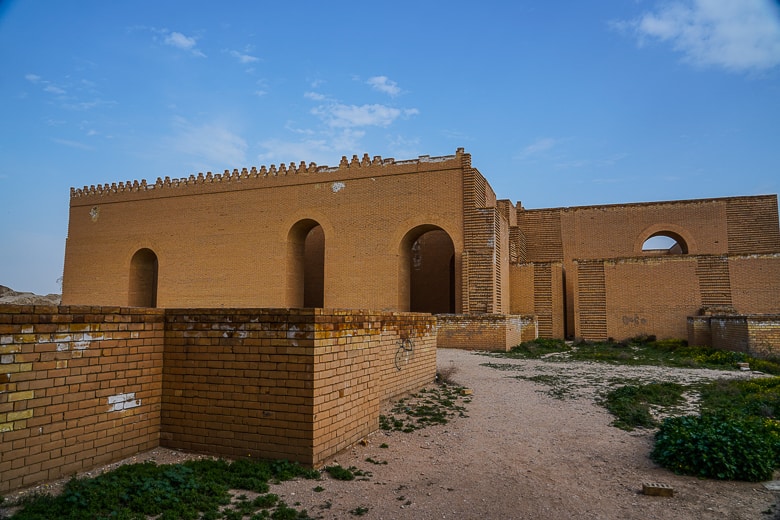 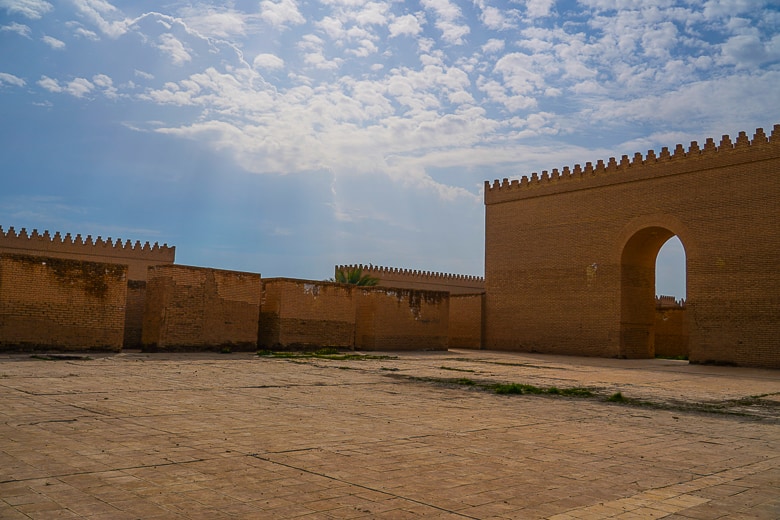 By 572BC Nebuchadnezzar was in full control of Babylonia, Assyria, Phoenicia, Israel, Philistinia, northern Arabia, and parts of Asia Minor. He also invaded Egypt in the year 568BC.
Nebuchadnezzar died in year 562BC after 40 years of power.

After the death of Nebuchadrezzar, Babylon had four more kings before The Persian Ruler Cyrus the Great took control over the place in the year 539BC.

More rebuilt parts of Babylon which were constructed during Saddam Hussein’s time.

Babylon would stay under the Persian Empire´s rule for two centuries before Alexander the Great then conquered Babylon in 331 BC.

He had plans to make Babylon the capital of his empire but died there in 323 BC before his dream came into reality.

Alexander’s generals divided his empire among themselves immediately after his death. This is how general Seleucus obtained Babylon.

Not long after he moved most of the population to his new capital Seleucia, this left Babylon decaying and deserted.

Babylon was then plundered for materials for building new cities like Ctesiphon, Baghdad and even Basra in far south Iraq.

Between the years 1889 and 1917 the area was extensively excavated by a German archaeology team led by Robert Koldewey.

Various parts were cleared including Ishtar Gate which was dismantled and re-erected in Berlin, a project which took over 20 years to complete. It can now be viewed in Pergamon Musem.

The Ancient Babylon ruins now and during Saddam Hussein time.

During the reign of Saddam Hussein, much reconstruction took place around Babylon, and one of his massive Palaces was built on a hill overlooking the ancient city. 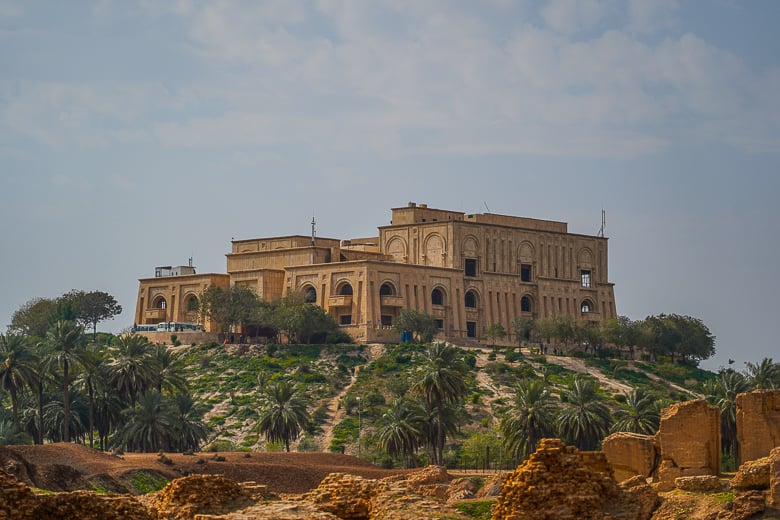 Saddam Hussein imagined himself as a modern-day Nebuchadnezzar.
He ordered the rebuilding of Babylon.

In 1983, the reconstruction of Babylon begun and new bricks were placed directly on top of the ruins, some 2,500 years old.

This sparked big protests from UNESCO and many scholars around the world. This is the reason Babylon is NOT a UNESCO World Heritage Site.

One of the many stones Saddam Hussein got his name inscribed in all around this ancient place.

Like on other historical sites around Iraq, Saddam Hussein gets his name inscribed on the new bricks. A sample inscription translates to: ”In the reign of the victorious Saddam Hussein, the president of the Republic, may God keep him, the guardian of great Iraq and the renovator of its renaissance and the builder of its great civilisation.

The rebuilding of the site was done in 1987 By thousands of workers from Sudan. During the middle of the Iraq – Iran war. 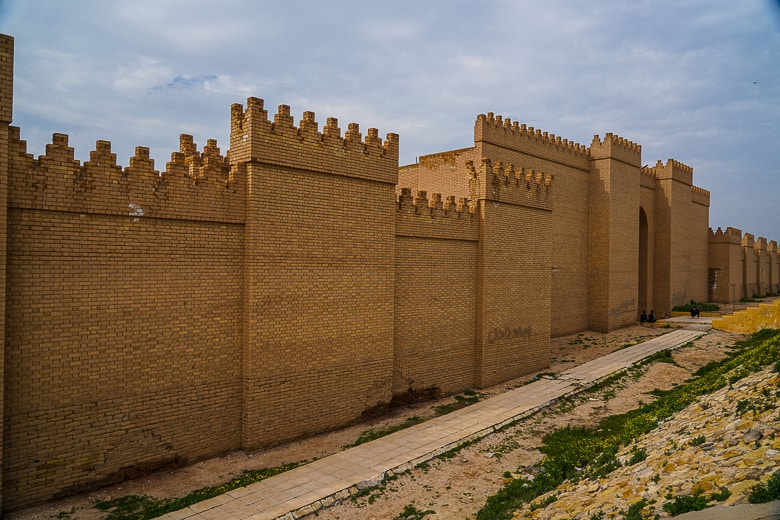 The rebuilt walls on top of the old original ruins.

At the end of the Persian Gulf War, he commissioned a personal palace to be built over more Babylonian ruins, in the same pyramid style as a Sumerian ziggurat, calling it Saddam Hill.

The massive gaudy structure almost completely covered the original ruins, outraging archaeologists. He also had plans for a cable car to run over the ruins, but it was halted with the 2003 invasion.

The River of Babylon as seen from Saddam Hussein’s palace.

What happened to Babylon During the 2003 Iraq Invasion.

During the 2003 invasion of Iraq, the occupation of USA Forces did a lot of damage to the old ruins. This was caused by troops driving their 60tons+ Abrams tanks around the ruins. The US Army also set up the camp Alpha around the ruins.

A huge area was levelled to create landing pads for helicopters and parking lots for vehicles.
Tanks rumbled over the ancient bricks, and Polish troops dug trenches through a temple. Soil holding artefacts and bones was scooped into sandbags.

Even when walking around the ruins now, will you see thousands year old pottery just laying around.

Where Is Babylon Today?

The site was once again open to tourist in 2009, but after years of destruction is there not much left these days.

You can see the rebuilt ruins from Saddam Hussein’s area and even Saddam Hussein’s castle which overlooks the ruins is now open to the public. But unfortunately, the whole inside of the palace has been looted.

There are no fences around the crumbling ruins, so locals climb all over. They break off small parts of buildings every day, so if nothing is done soon to preserve the ruins, Babylon will be all gone.

On my walk around the outskirts of the ruins, I saw thousand-year-old pottery broken all over the ground, nobody is taking care of it.

All over the area, and nobody to or nothing to protect it. What a shame.
My local guide found 2! old coins in the rubble during my visit, and this was completely normal according to him. 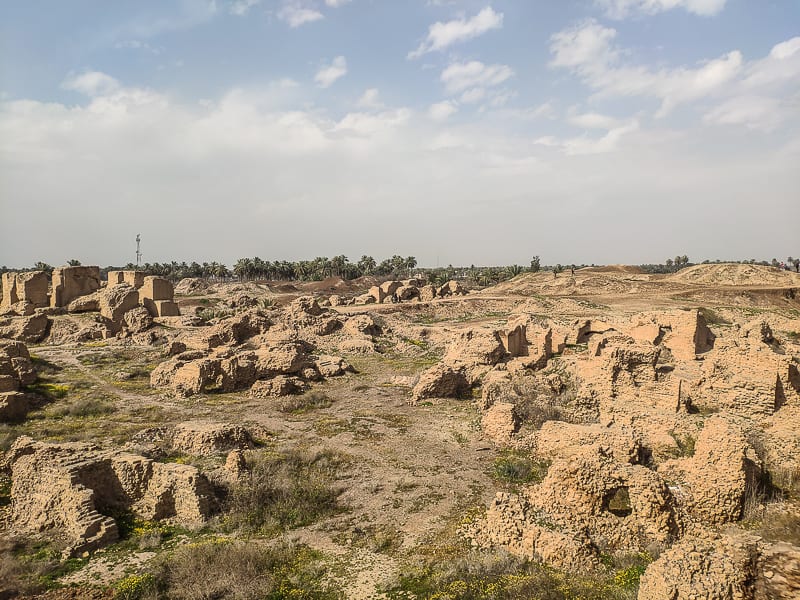 The Orginal part of the place is now  in horrible conditions. 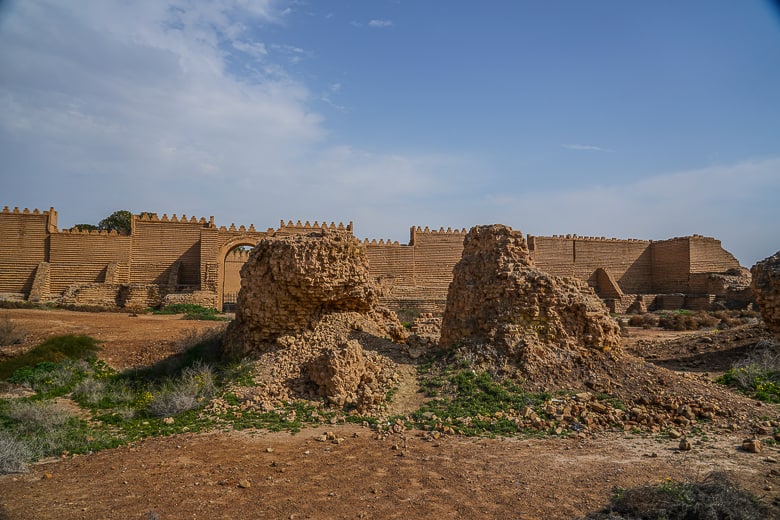 Some of the crumbling ruins with the rebuilt ruins in the background.

Even an oil pipeline runs through the eastern part of the ancient city these days, going right through the outer wall of Babylon.

There are a few English speaking guides available for hire. Most of them worked there before the 2003 invasion and are happy to share all their information about this place and how much of it was destroyed by the foreign military forces.

Like all other Iraqi´s that worked in the tourism industry before 2003, so do they openly admit that everything was better under Saddam, a common phrase to hear in Iraq is “Saddam Hussein was a horrible person, but the Americans were so bad that they made Saddam look like an Angel.” 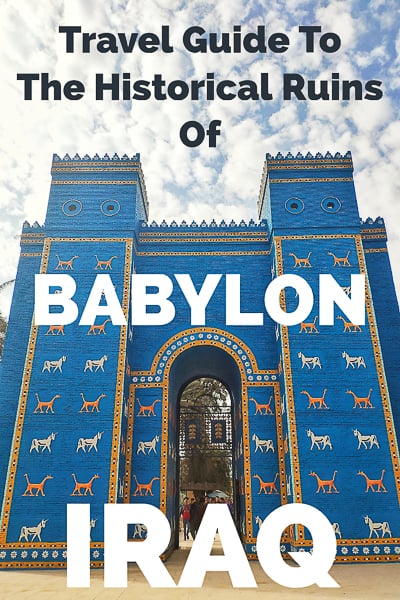 Travel Guide to Babylon.No other places in the world has a more historical sound to its name as the city of Babylon in Iraq. After years of colonial looting coupled with the crazy dreams of  Saddam Hussein. Along with massive American destruction during the Iraq 2003 invasion, the legendary city of Babylon almost vanished.