Orangutan, the great ape that shares 96.4% of the same DNA as the human.
If you want to get close up with Orangutan in their natural habit, Gunung Leuser National Park in Sumatra, Indonesia is the place to go.

In 1973, a Swiss organization set up an orangutan rehabilitation centre in Bukit Lawang and in 2004 the National Park got enlisted on the UNESCO World Heritage.

Indonesia more to offer than most people realise, here are 19 landmarks in Indonesia worth a visit.

You are more or less guaranteed to the Orangutan, and-and there’s a very small change to see the other, wild animals if you do a longer trek into to the rain forest and sleep there overnight.

To see the Orangutan you got two options, you can either visit the feeding platforms, where the semi-wild Orangutang that has been rehabilitated.
Feedings are daily at 08:00 and 15:00.
Attending the feeding costs  150,000IDR.

Or you can trek into to rain forest with a guide (a guide is required since it’s very easy to get lost in the forest) But be careful with your choice of guide, the guide I hired, was useless, he had no idea about any of the plants, trees in the Jungle, he was just walking around listening to music from his phone without headphones, so I’m still surprised we managed to see any wild Orangutan.

Bukit Lawang itself is one of the most relaxed places I have ever been; everything is so laid back and easy going there when you are not out looking for Orangutan your either tubing down the river or just relaxing in a hammock next to the river. And for lunch, you will enjoy some fresh fruit straight from the jungle around the river. 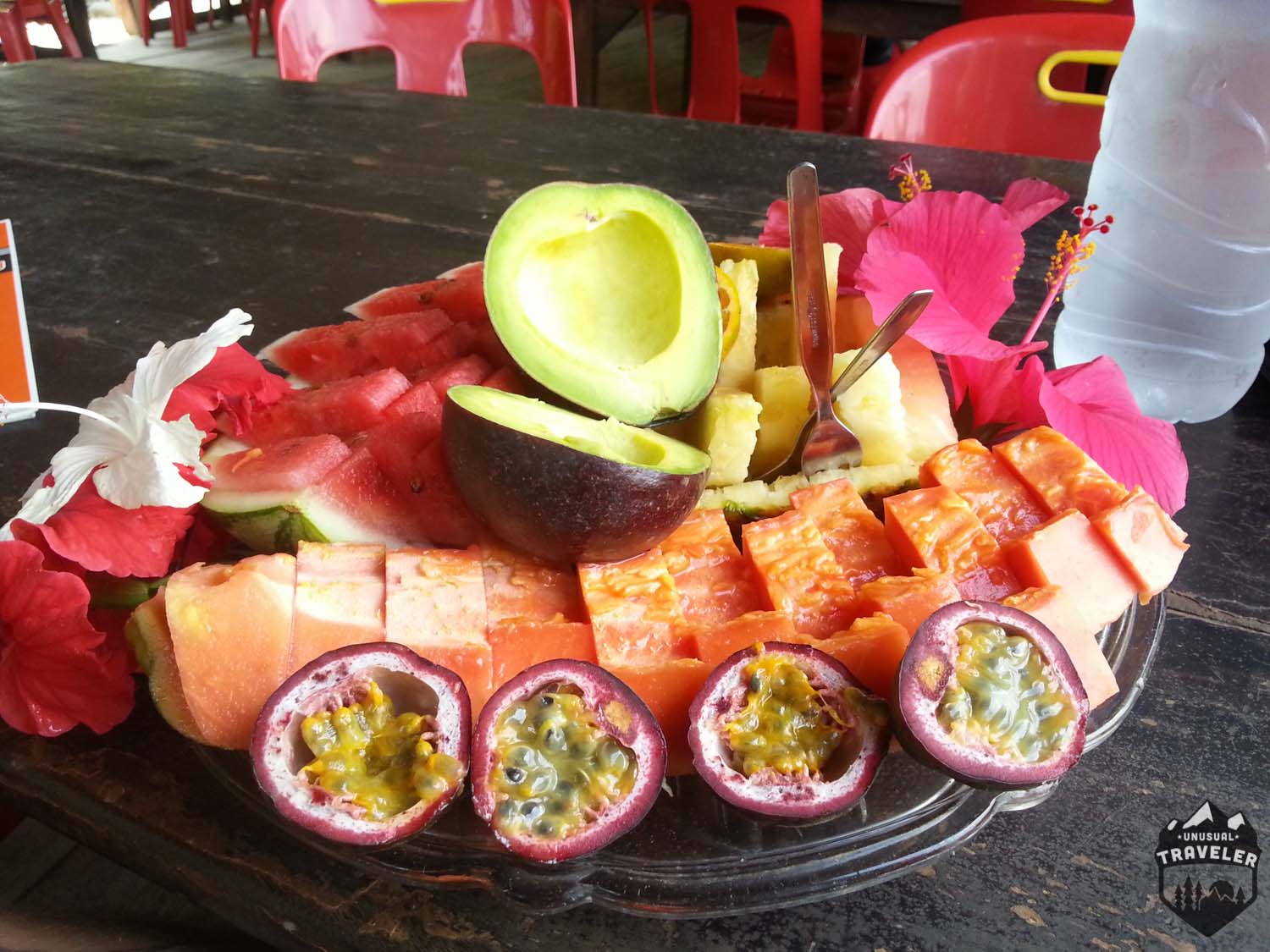 Fresh fruit plates for breakfast, lunch and dinner for less the 3USD.

But back to the Orangutan, if you were gone see the Orangutan at the feeding platforms, I recommend you to do it during the early feeding season, since the later one often get very crowded with domestic tourists, visiting from Medan.

Mum and baby Orangutan in the wild.

If you’re into photography, there’s a big change your best photos will be from the feeding station since you are able to get closer to the Orangutan.
But you should defiantly do the rainforest hike to and see the Orangutang in their natural habitat.

The trek through the rainforest starts literally 5min from Bukit Lawang, its start just behind some of the guesthouses and begins with a steep climb.
Maybe you are planning a trip to Borneo to see Orangutans instead?

The hike itself is great; it’s pretty easy but also very humid, so be sure to bring a lot of drinking water.
Unfortunately, my trek around the rain forest got a bit ruined by the guide, we did manage to 4 Orangutan in the wild, but we didn’t see a single another animal. Why? Because my guide was walking around listening to loud music from his phone, the change of seeing other animals are quite small, but this didn’t help much at least. 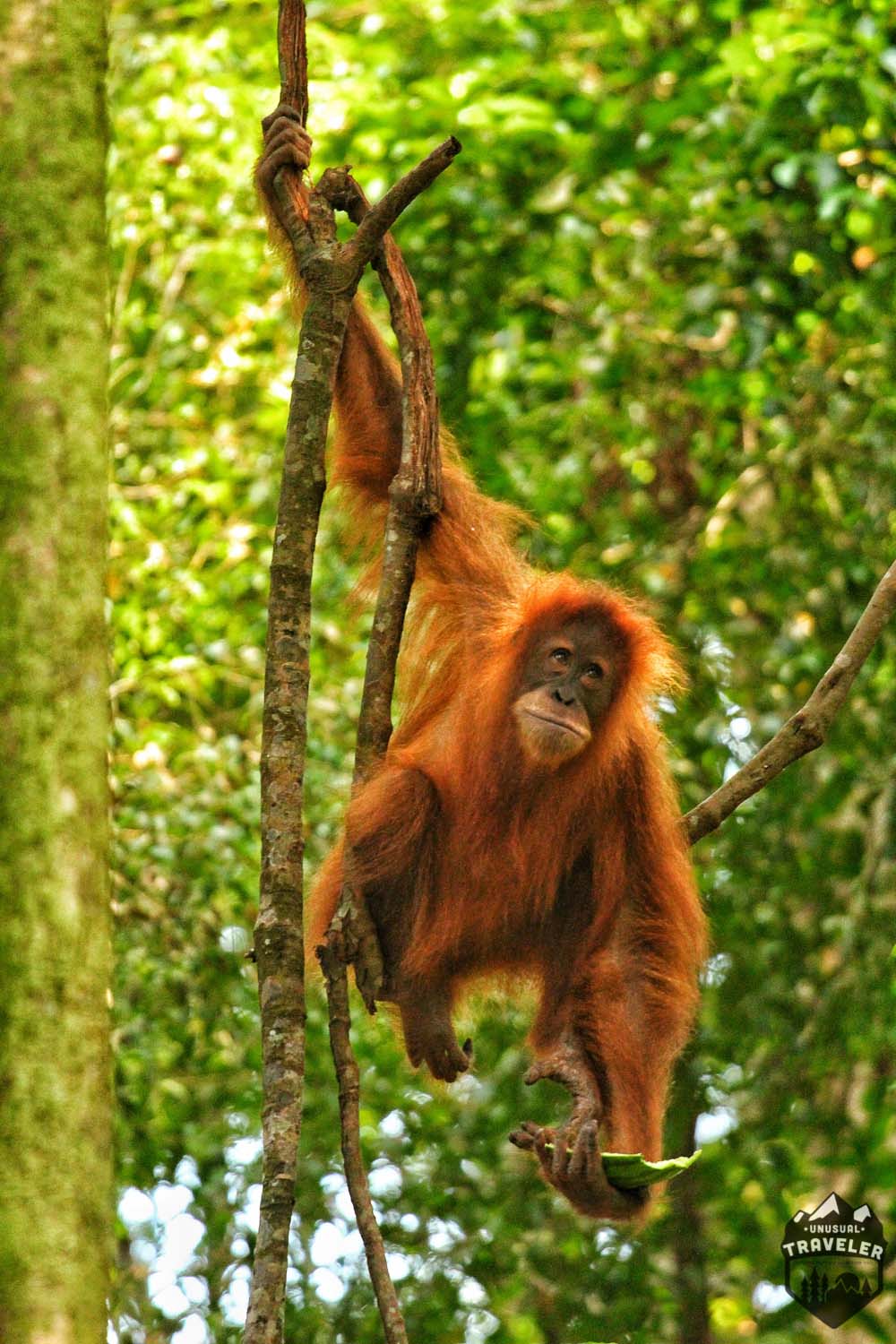 An Orangutan is hanging there with a watermelon piece that some tourist gave her.

Also, be sure to be in a small group when walking around the rainforest, we came across a few backpacker groups that were more than 20 people in the group, Young backpackers with a pre-booked tour through a European travel agency.
They didn’t see any wild Orangutang at all, and they were more much interested in taking selfies and drinking the vodka they had brought with them. Idiots.

The only way to get to Bukit Lawang is to go through the big city Medan, the largest city on Sumatra.

Medan, the fourth biggest city in Indonesia and often called the worst city in Asia by backpackers.
Overall, Medan isn’t really a tourist destination, it lacks good backpacker accommodation, its warm and polluted and doesn’t have any sights that apply to travellers, but it’s still a convenient stopover place on your way around Sumatra, it got some big international shopping malls, so if you do need to buy or fix anything, this is the place to do it.

How to get there:

Medan can easily be reached by air with direct flights from all the big city´s in South East Asia, with Air Asia flying from Bangkok, Kuala Lumpur, and Singapore, and Jetstar flying from a few other Asian cities.

From the airport in Medan, take a taxi to Pinang Baris bus station about 1km from the Main bus station. From Pinang Baris you can take a shared minivan to Bukit Lawang for around 15 – 20 000IDR, have to bargain.

The road from Medan to Bukit Lawang is not too bad, and the trip should take about 3hours.

There’s ONE minivan a day from Bukit Lawang to Lake Toba a day if enough people.

There are also at least 4 minivans leaving Bukit Lawang every day for Medan.

The «best» accommodation in Medan is around the grand mosque, just across the big shopping mall.

Hotel Residence, next to the grand mosque a decent backpacking guesthouse from 70 000IDR

Hotel Zakia. Also next to the mosque, not the cleanest but cheap. From 50 000IDR

Sultan Homestay. Next to Hotel Zakia. Cleanish and friendly staff. From 70 000IDR for single room got free Wifi and helpful staff. Probably the best option.

All the 3 guesthouses are less than 5min from each other, so it’s a good idea to check out all of them. Across the streets, there a Mcdonalds and a decent supermarket in the basement of the mall.

There’s also a travel agency across the street that offers a private air-con car to Bukit Lawang and other destinations in Sumatra.

When arriving in Bukit Lawang, you have to walk about 5min from where the minivan/car drops you off.
Walkthrough the tiny market; you can either continue walking north to the feeding station or across the high suspension bridge.

There’s accommodation «everywhere» the closer you get to the feeding station you get, the more relaxed and peaceful it gets. It’s absolutely no problem to find a place to stay; I’ll recommend you to check out a few.

All guesthouses have a small restaurant and offer guided tours in the jungle.

There’s NO ATM in Bukit Lawang, so be sure you bring enough from Medan. There’s an ATM that accepts MasterCard about 7km away, but it was empty when I was there, and the locals said it rarely works.

So remember to bring enough cash!!

Want to see some more animals while in Asia? Check out this post about where to see Pandas in China. 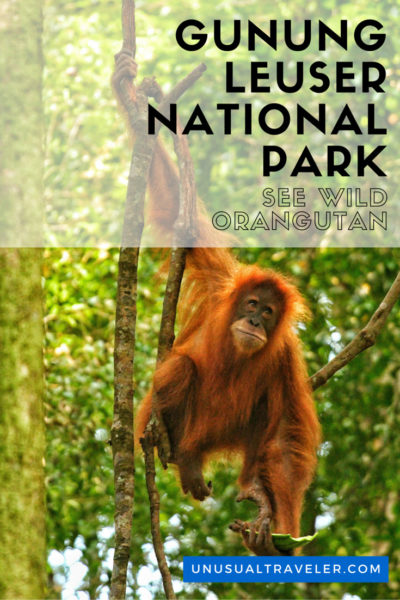