There are a lot of beautiful places in the world, but most of them are already overcrowded with crowds of tourist. So what to do to escape the crowds? Visit one of the worst sites in the world.

The Aral Sea, or what’s left of it, definitely not a beautiful place.

It’s one of the biggest disasters that the humankind has left behind so far.

Visiting the Aral Sea can be considered to be Dark Tourism

Looking for a complete Travel guide to Uzbekistan? Check out this great guide from High heels and a backpack.

one of the old rusted up boasts

Back in 1960, was the Aral Sea known as the 4th biggest lake in the world
.
Nowadays the lake is not more than 6 or 7 per cent of its original size, because of environmental degradation.

The drying of the Aral Sea has ravaged a region roughly the size of Germany with diseases, birth defects, agricultural and economic devastation.

Everything that was once built around the Aral Sea is now deserted and left behind in the middle of Moynaq.

It once became a popular holiday destination in the old Soviet; with its beaches, seaside restaurants with fresh seafood, and hotels. But these days, you will only see the ruins of the former glory.

Moynaq is genuinely a depressing place, but still worth a visit if you are in Central Asia. It’s not easy to get to Moynaq. From the information I could find online, there suppose a bus a day from Nukus, but in the two days when I was in Nukus waiting around for the bus, no bus showed up, so I had to go with a shared taxi.

Luckily, Nukus is an exciting place with the famous Igor Savitzky museum, that houses 82,000 items, ranging from antiquities from Khorezm to Karakalpak folk art, Uzbek fine art, and, uniquely, the second largest collection of Soviet and Russian art in the world after the Russian Museum in St. Petersburg.

So after two days of waiting for the bus, I was lucky to find a shared taxi with some locals that are going to Moynaq for less than 10 USD.
It was for more than 200km trip.

The road going there is littered with cotton farms everywhere (one of the main reason the Aral Sea have disappeared).
But, when I arrived in Moynaq, the only thing to see there is the Aral Sea monument, placed where the shoreline used to be, and the abandoned fish factory, which used to provide work in past time.
The equipment left there to rust and the famous old fishing boats which left behind when the sea disappeared. The Aral Sea Monument, where the water level used to be Even though Moynaq is not a pleasant place, you can easily spend 4/5 hours walking around, climbing the old boats and walking around the ghost city of Moynaq.

Note that you have to carefully plan how to leave Moynaq and get back to Nukus or Khiva since there is no transport and no place to stay.

I was lucky to find a local person that offered to drive me all the way back to Khiva for 60 USD for the 5-hour journey. I did not even try to bargain the price, coz I was just so happy that I managed to leave the place on the same day I arrived.

How to get there.

Most hotels and guesthouse in Nukus and Khiva offers day trips to Moynaq and back for 100 USD round trip from Nukus and 140 used for Nukus.

The price is for the whole car, so if you have four people, you can share the cost for the lower price.

But, if you’re more adventures or travelling alone, as I did, better going with locals as you will get half price.

But, it’s only if you’re lucky and have to be patient. If I would go back a second time, I would most likely go with the tour from one of the cities.

Nukus can easily reach by train (twice a week from Tashkent) or daily bus from all the big cities in the country. There are two flights a day from Tashkent and a flight on Monday to Moscow.

According to online information, there is one hotel in Moynaq, but it was closed when I was around.

If you got your own transport and a tent, camping next to the old abandoned boats near there would be a perfect spot to take some great photos of the milky way during the night.

There are NOWHERE to change currency or money changer in Monyaq, but plenty of places in Nukus or Khiva.

There are no real hazards in Monyaq except getting stuck there, and remember the people that still live there is extremely poor. I met some other travellers in Khiva that had a problem with some aggressive beggars. Also, there are a lot of stray dogs walking around. 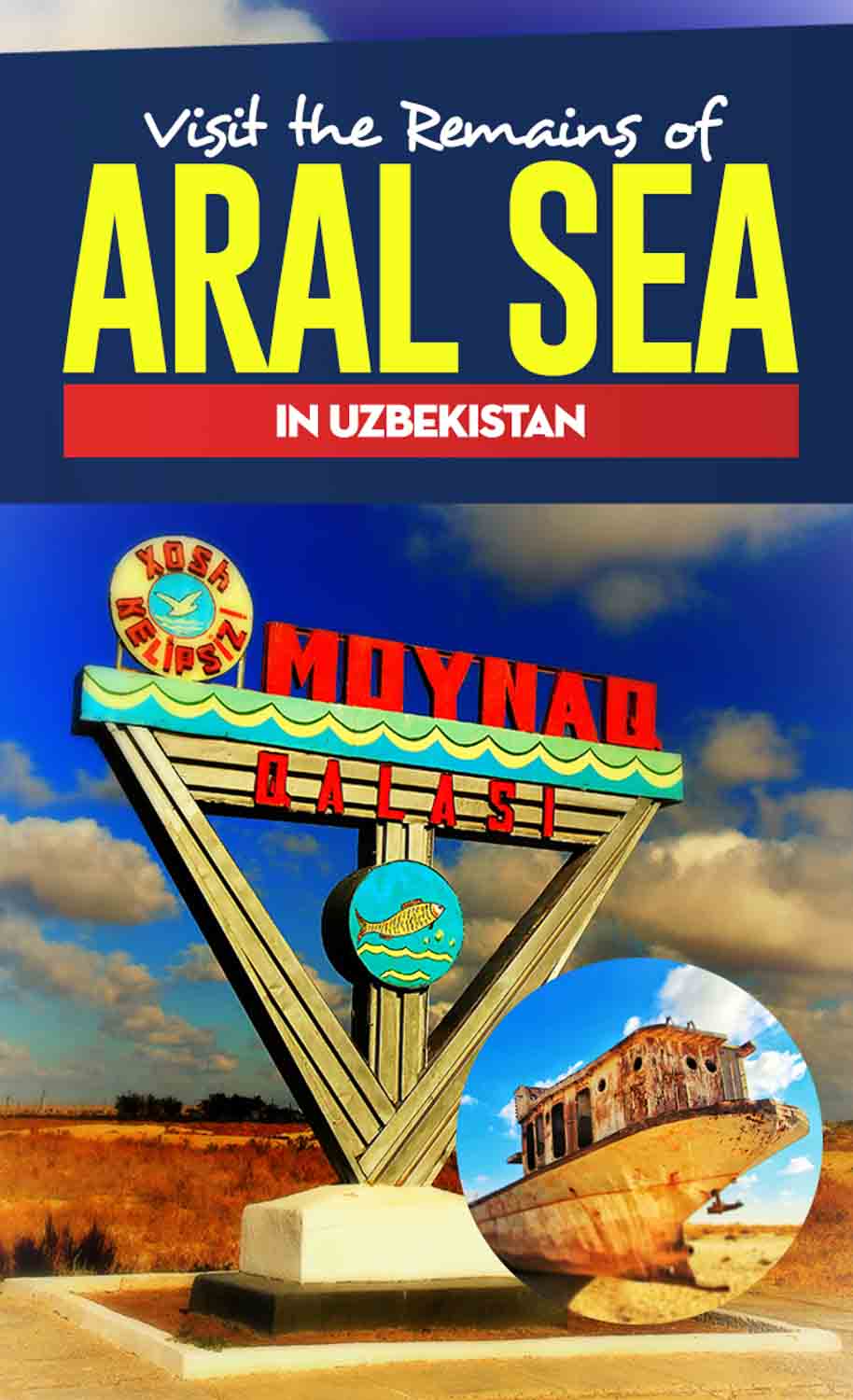 There is a lot of beautiful places in the world, so do the worst. One of them is The Aral sea, or what’s left of it, definitely not a nice place.